10 Reasons To Be Excited About Battlefield V
LATEST CONTENT

My excitement over playing Battlefield V has gone through different stages. When EA first announced the game in May, I was impressed with the overall look, new features, Tides of War, and so on. However, that initial positive impression changed to “mixed” the more I looked at The Company feature and the game’s historical accuracy. Then I played the beta in September, and my focus moved away from the controversies to the gameplay, and still, I had a few concerns. DICE announced a lot of changes after the beta – even toning down customizations in The Company, and as I read through all the improvements DICE is implementing, my initial excitement started returning, and today I can easily list 10 reasons to be excited about Battlefield V.

Everyone that plays Battlefield V can journey together as there is no Premium Pass unlike in most previous instalments. This is a significant step for the franchise and unites the community in a big way. All post-launch content will be free for every Battlefield V player, and no DLC and expansions are reserved for those willing to dish out more money.

DICE is even taking this concept of “play and stay together” further with Tides of War, Battlefield V’s live service. It is an evolving journey with a new narrative releasing every few months. The first chapter, “Overture” releases roughly two weeks after launch, while Chapter 2, “Lightning Strikes” runs from January to March 2019. In March, the battle royale mode, Firestorm, releases alongside the third Tides of War chapter, “Trial By Fire.” DICE also announced that more content would release after March 2018. 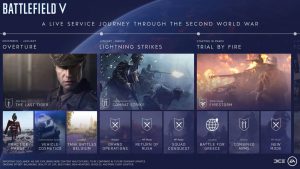 With Origin Access Premier you pay only R200 for a game that would otherwise cost you R1000. You also get the Deluxe Edition and early access from November 9.

Related: Battlefield V: Every Edition and How You Can Play Early and Get Extra Content

Origin Access saved me R850 with Mass Effect Andromeda. I played my ten hours, didn’t like the game and cancelled my subscription. With Premier I get full access to all multiplayer maps and modes as well as all War Stories. If I enjoy the game I can continue paying the subscription or I can purchase the game at a discounted price. If I don’t enjoy it, I can cancel my subscription and reactive it at any time, or I can extend it if I want access to any of the games currently in the Vault.

Battlefield V launches with eight multiplayer maps and is one of the top reasons to be excited about playing the game. The map reveal last week showcased some of the biggest and most beautiful maps I’ve ever seen in a Battlefield title. Big maps and big multiplayer battles have always been the trump card for me, and although much has changed with Battlefield V, this at least, remains the same.

I am excited about the map variety and the different modes we’ll play on it. We have two maps set in the African desert, and two on the icy slopes of Norway. Talking about these, in Fjell 652 we’ll experience a new dynamic in the series – an epic confrontation between infantry and pilots set high atop a snowy mountain peak. Then there’s Twisted Steel with its damaged steel bridge that makes it the largest structure ever created for a Battlefield game. Another interesting map is Harmada which is about one of the largest tank conflicts in human history, and also one of the largest maps in the history of the Battlefield series.

Each map differs in its focus on pace, units, and size, and all maps include all the game modes. These are Breakthrough, Conquest, Domination, Final Stand, and Team Deathmatch. The five modes give players a choice to play a map in a mode they prefer.

EA first introduced War Stories with Battlefield 1, and I loved every second of playing through it. It offers an engaging single-player campaign and a more in-depth look at war by placing the player in the shoes of a soldier. In Battlefield V, War Stories focus on the “untold stories of World War II” and it is a great reason to be excited about the game.

Related: Battlefield V’s War Stories – Everything You Need to Know

DICE made several improvements to War Stories from Battlefield 1. These include better graphics and gameplay and more relatable characters. Each campaign shows its cultural influence through language, location, place in history and characters. War Stories isn’t just about experiencing single-player; each campaign focuses on a different multiplayer class and can also serve as a good introduction to the different playstyles and gameplay mechanics. Battlefield V includes five War Stories, four available at launch and the final one releasing in December.

It was such a delight to play the Battlefield V beta on local servers (after DICE fixed the launch day bugs), especially given the struggle we had to get South African servers for Battlefield 1. It took months of campaigning and the support of international YouTubers to get EA’s attention.

With Battlefield V we will have local servers from the get-go. Unless fate turns on us and EA decides for some reason to pull the plug. It’s a very unlikely scenario, and we can rather focus on looking forward to enjoying the game with low latency and that unique South African banter between players. PlayStation 4 and Xbox One servers will launch with a 30Hz tick rate and, on PC, it will be 60Hz, with 120Hz for smaller confrontations. DICE will also improve this going forward on all three platforms post-launch.

Specializations have been a trademark of almost every Battlefield game, but in Battlefield V it will be a much more refined system. At launch, each class will have one weapon’s Specialization wholly unlocked. Specializations are available for vehicles and weapons and is a tool that allows the player to change his or her weapon (or vehicle) to fit their playstyle.

Specializations do not alter the core mechanics; it only compliments your preferred playstyle or adapts to the confrontation you’re in. You can also re-spec weapons and vehicles as your needs change. Although a simple mechanic, each specialization has pros and cons, and you will have to consider several factors before you commit to an upgrade path. The Company is where you can tweak your weapons and vehicles.

Related: Why You Should Take Notice of Battlefield V Specializations for Guns & Vehicles

You purchase the upgrades with the in-game currency, “Company Coins.” You earn these by simply playing the game and completing assignments. Again, Specializations do not include pay-to-win upgrades; it only adjusts items to fit your playstyle. You can earn as much “Company Coins” as you are willing to play for.

You can also pay with real money to get “Premium Company Coins,” but these are limited to purchasing only cosmetic items. It includes things like face paint and weapon skins. Secondly, “Premium Company Coins” only launches at a later stage as EA wants players to rather earn Company Coins and become familiar with the in-game progression system.

The hunt for Easter Eggs are always a big thing in Battlefield, and I am so curious to see what DICE came up with for Battlefield V.

Easter Egg hunts in Battlefield games are like playing a game within a game and I love to follow the internet sleuths as they uncover one secret after the other.

Firestorm only releases in March 2019 as part of Tides of War. It launches alongside chapter 3, “Trial by Fire” and from what we know so far about Firestorm, it aims to offer a unique battle royale experience.

I think we can all agree that the genre is over saturated at the moment, and to play it with different mechanics while remaining true to the core game objects could offer something unique. The biggest difference so far is that you will only be able to play Firestorm as part of a squad. Each squad consists of four members, and a total of sixteen squads compete in a single round. You also hunt for gear and vehicles, but there are trade-offs for every decision you make. Firestorm will release on the biggest map in franchise history.

What defines a Battlefield game? For me, it’s large-scale warfare on big maps. It’s about teamwork, strategy, a certain level of historical accuracy, and having fun. Up until I played the beta I was concerned that EA turned Battlefield into something else, what with the cyborgs running around and so on, but those fears have subsided under the weight of everything else. DICE made a lot of changes in Battlefield V – it doesn’t have the competitive finesse of Battlefield 4, but it is also a more team focused experience than Battlefield 1.

Some of the changes I love, like the refined bullet penetration system, Specializations, and Tides of War. While I am curious to try the Company features, especially since DICE toned it down, I still have some concerns. Firestorm could be a fantastic experience for squads, and the new co-op mode, Combined Arms, could also be a big plus for friends who want to play together.

Even if it turns out that I don’t enjoy the multiplayer side as much as I did in previous titles, I bet that I won’t regret the R200 I’ve paid to experience the above ten points.

Gaming | PC | 10 Reasons To Be Excited About Battlefield V