My Anno 1800 journey was filled with sadness, excitement and anticipation as I tried my hardest to master the game’s complicated and layered mechanics. I adore an RTS game that manages to keep you intrigued even while your city is being burnt to the ground and Anno 1800 was just that. I started on an empty plot of land and a couple of hours later I had ships being chartered to and from the many islands I owned and ran as they sent goods I could not grow on my main island so I could produce for the needs of my people.

Sure, this well-oiled machine took a while to get going but once I wrapped my head the core of Anno’s systems, it was smooth sailing. Well, until someone who was envious of my success came along and attacked my island. It took a while as Anno does not hold your hand. For hours I sat there wondering why I could not upgrade my households to the third level until I realized that I was lacking a specific need. This then led me to venture across the ocean to find and build a new empire on fertile land. 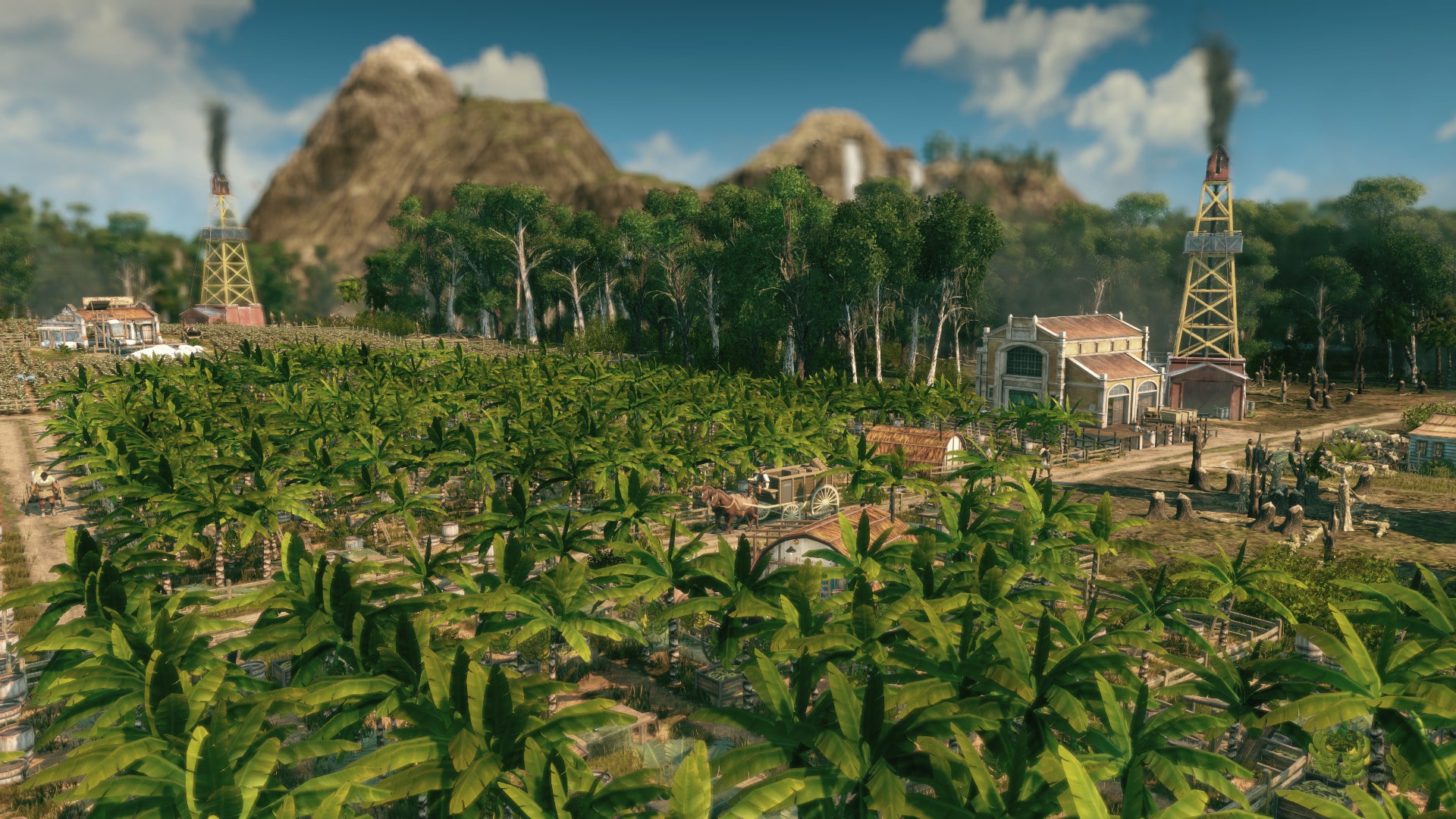 The magic of it all comes together slowly but your sprawling city, happy citizens and massive industrial landscapes make the slow start well worth it. Anno 1800, set during the Industrial Revolution, gives you an empty canvas to build your empire on. The game follows you as you take on the role of a once-rich family member who has returned home to discover that your father has died and a tyrant has no taken over your father’s city with lies and false pretences. You head off to a new island to start fresh but little do you know, the lands around you are swarming with leaders already doing the same thing you are trying very hard to accomplish.

Anno’ 1800’s core is city management. You need to look after your people as you start them off living in farmhouses, attending to livestock, growing wheat and making soap. As you build your empire, you will unlock new things to build and new milestones to reach in order to repeat the process. Farmers need very little but as you reach Artisans and the higher ranks, they require more so keeping the needs up is the biggest challenge. 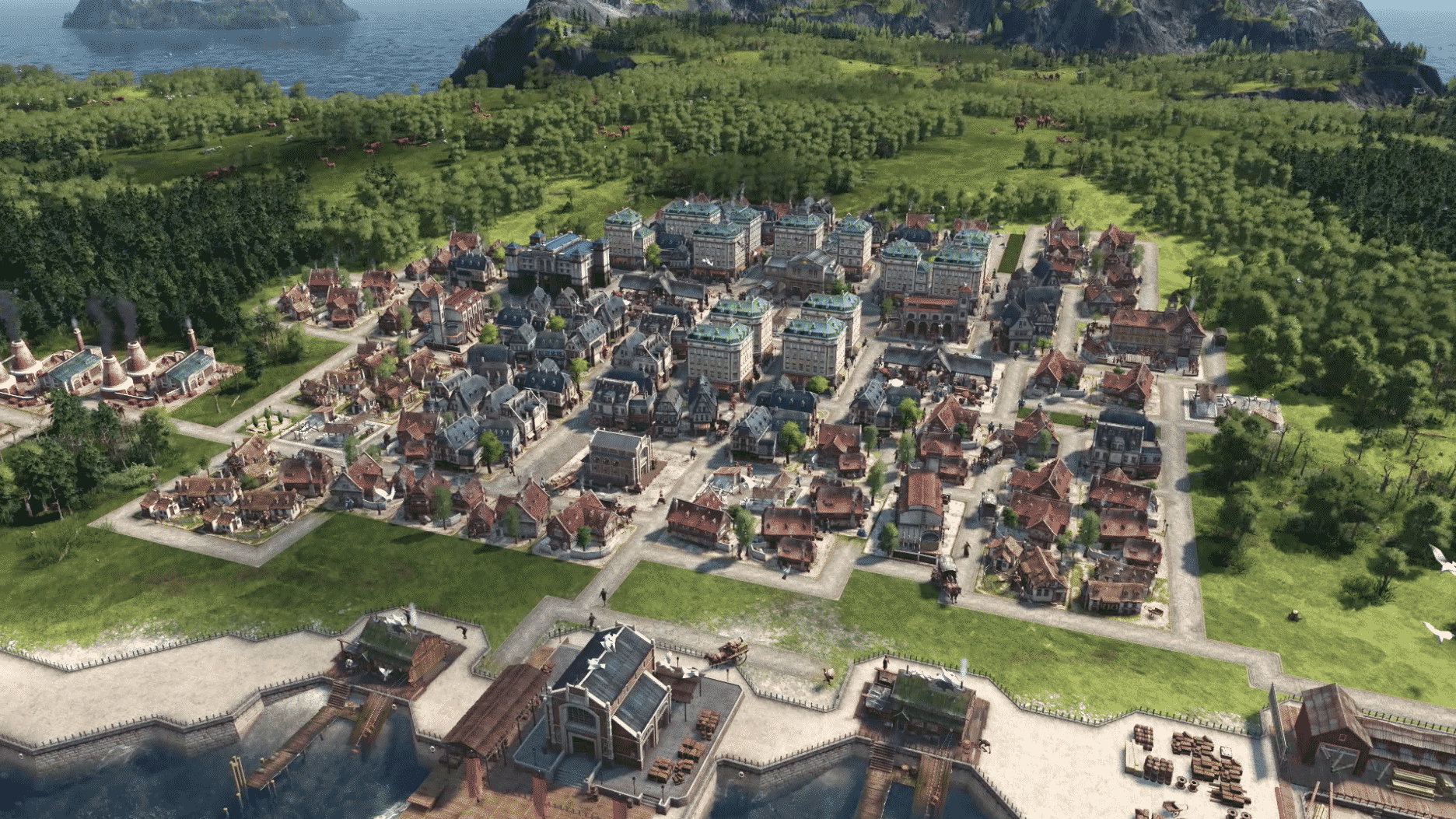 Making sure you produce enough wool to make enough clothing for an entire village is one challenge but producing enough wool for a city is another. As you progress in Anno, these challenges while juggling your people’s happiness, making sure you don’t go bankrupt, burn your city down and prevent people from rioting, become harder to accomplish but there is always a way to master them. Building more hop fields on a different island allowed me to charter more ships to collect them and bring them to the beer distillery and create bigger batches of it to make people happy. 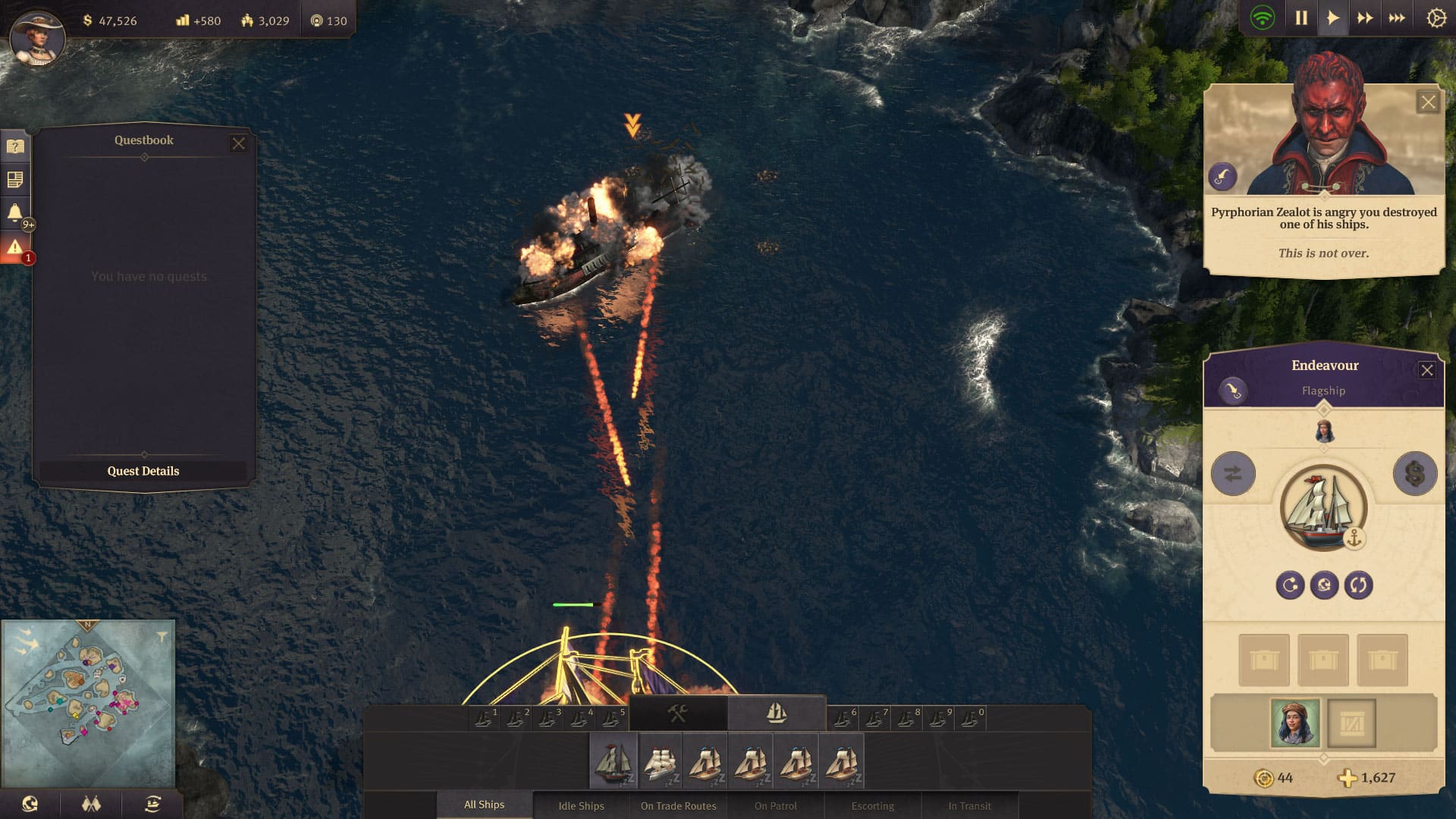 I often got so distracted creating new farms and building new iron factories that I forgot to pay attention to the population and who exactly can work on what. Expanding too fast and not having the people to man the workload often led me to bankruptcy so keeping the numbers low is key to success. It is all about growth and the game’s pace keeps things calm until you go overboard.

I found a new island and went trigger happy creating new settlements without creating the foundation for a successful town. A market, a church, fire station, police station and a good set of trade unions are vital and not having them is detrimental to your city’s success. 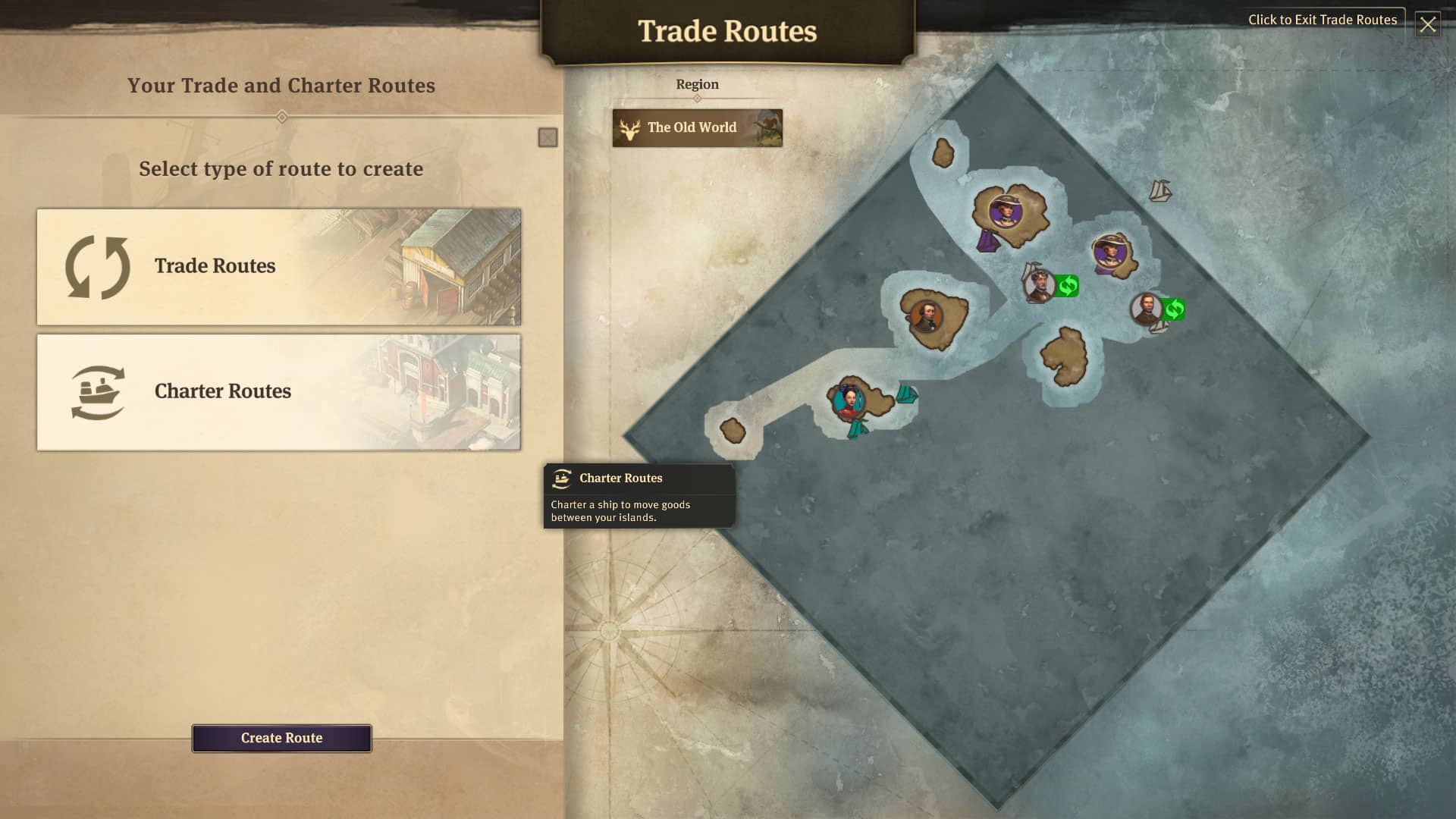 We then have the city-builder side of things which is one of the best I have ever experienced. Anno 1800 is just perfection when it comes to its freedom of building and the more you spend time on a project, the more it will flourish. There is one rule to it all; all roads need to connect to each other. With that concept in mind, the land is only as big as your imagination and halfway through my campaign, I could already see my mammoth city coming to life and foresee the groundwork for the weeks ahead.

Dragging roads across the ground, planting trees, placing a market in between every new village and topping it all off with a fire station for safety had a satisfying feeling to it all and Anno is built in such a way that you can move around and customize almost any small hub you spend time on. Zooming into your creations reveals swarms of people bustling about and doing their daily work. It is truly a wonderful experience to see it all come to life and sit back and watch the machine function. Horses carrying pig meat to the sausage factory and glass being carted to the window makers right before you are about to build your new town hall. 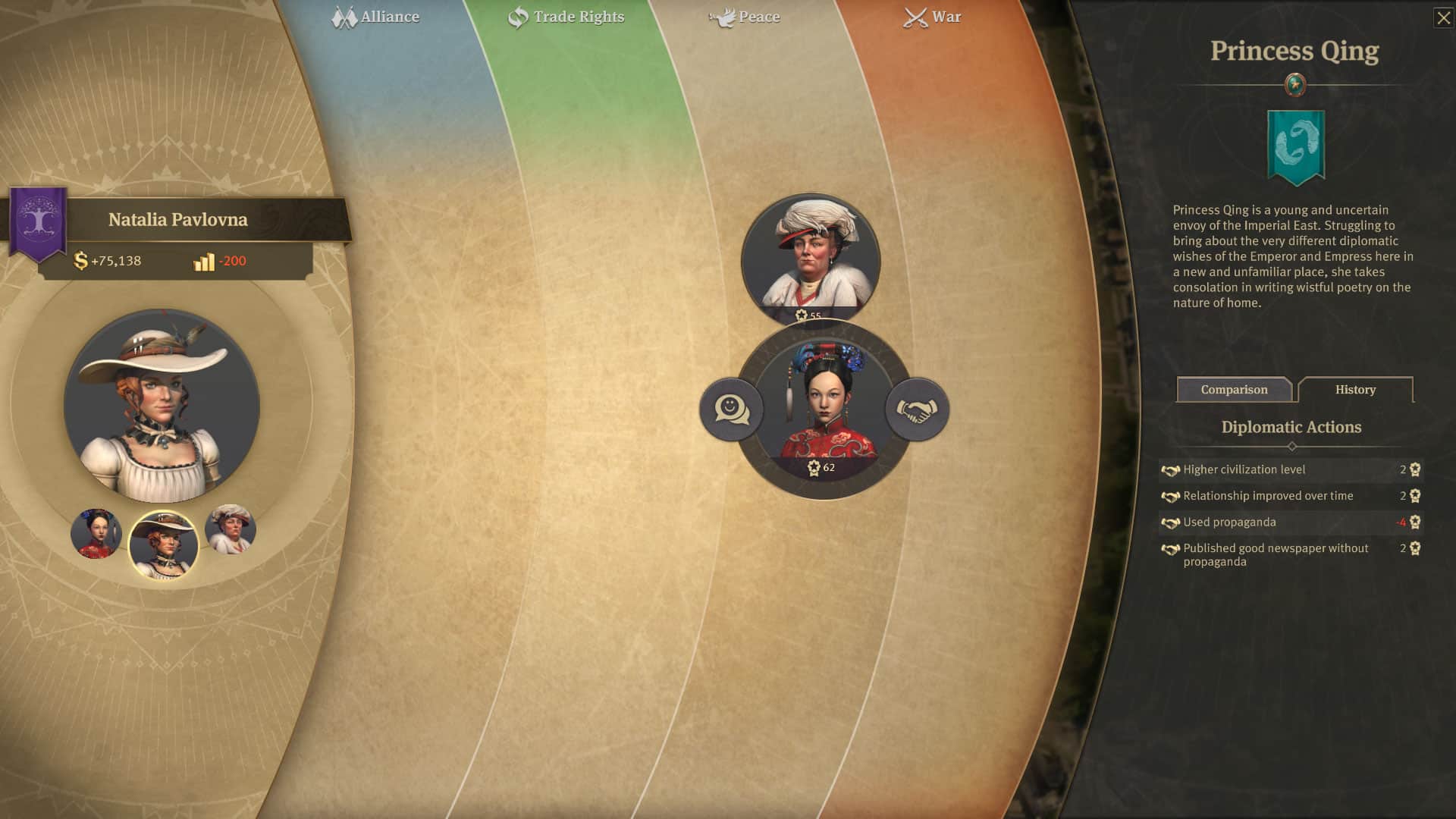 But there is a large system in place in Anno 1800 that works in the background. Politics and diplomacy drive your relationships with the leaders around the world map. Some of them will frown upon specific actions while others will enjoy them. I altered the newspaper using limited influence points to sway it in a more positive favour during a dark time in my town. One leader thought it was a wise choice while another did not enjoy the move and I lost my relationship points with her.

The different leaders in the world map rank between being an ally or being at war with them and your moves will slowly impact this system. Even taking over a new island upset some of them as they began to see me as a threat. I went to war with a few of them during some sandbox modes and it was quite a fight indeed. I built ships for the ocean and cannons for my harbour. It is not something that happens often but you would rather want to be well-prepared for these sorts of things than unprepared and you get completely decimated. 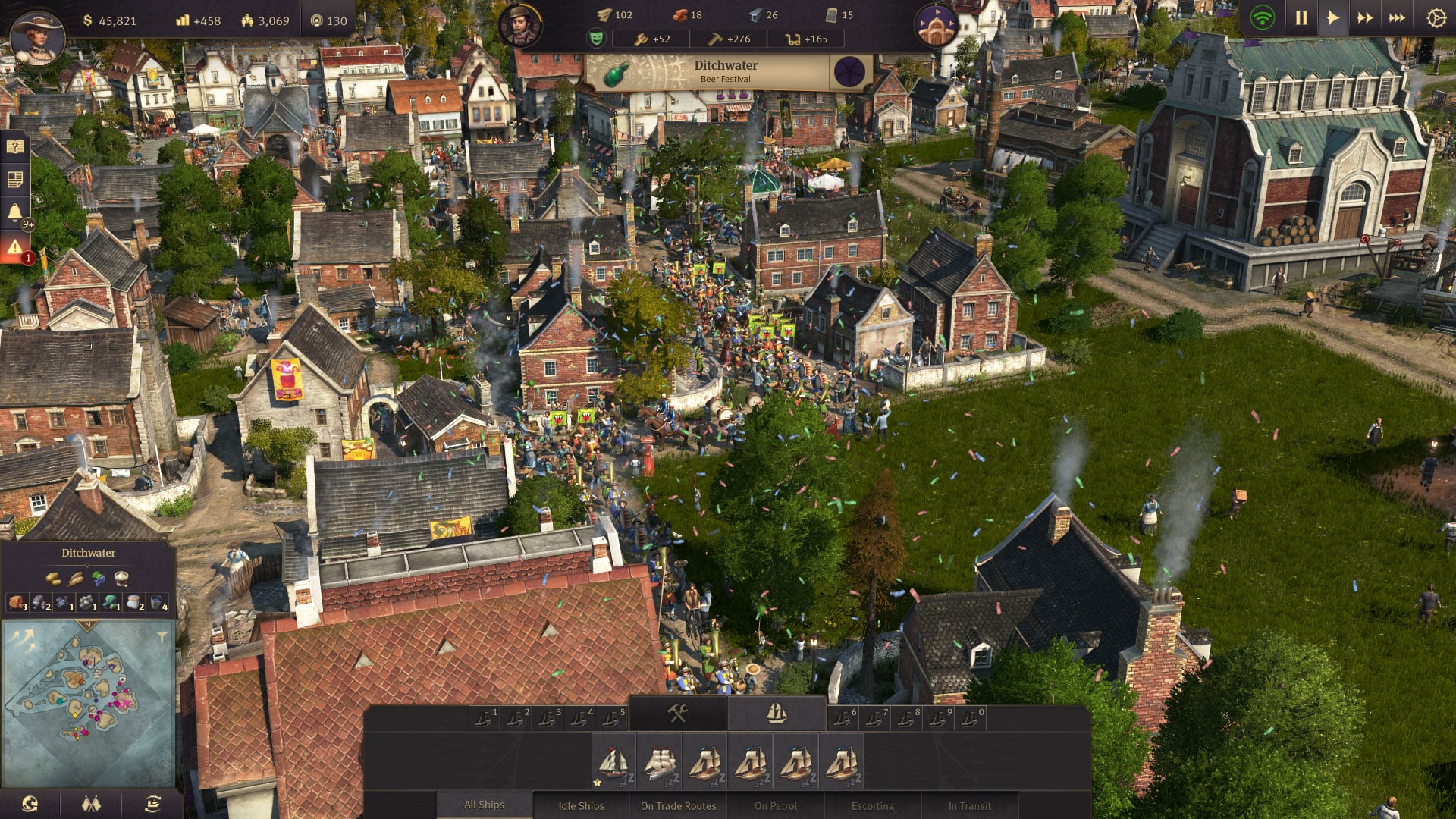 As you progress in the game, more and more things become available to take on. The campaign has a decent few missions as well as a story running throughout the experience as you try to grow bigger than your rival uncle and uncover the secrets behind your father’s death. The leaders around the world are all predetermined and they deliver a challenging competition throughout the chapter-based adventure.

You then have the Sandbox mode which lets you customize the playing experience and create a relaxing or challenging take on the game’s systems. You can adjust the starting cash, the difficulty of the game and its leaders and even how hard it would be to keep your people happy. You can also change the island size and how long it would take for you to win the game mode. It is here where the most hardcore of players will spend most of their time. I jumped into this mode for a bit after completing the campaign and it started off quite similar but you have a lot more freedom when it comes to how fast you advance through it. 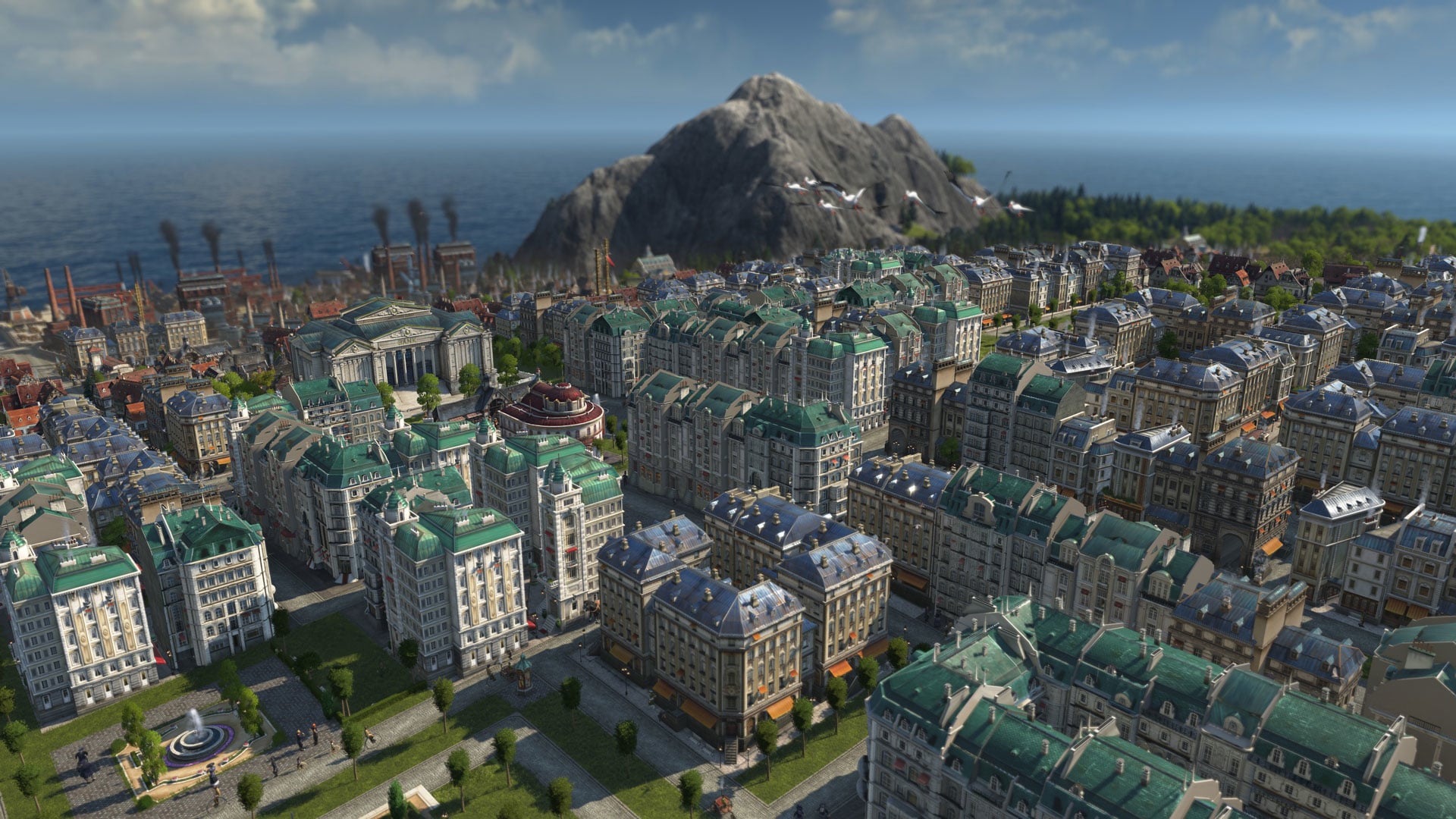 Anno 1800 also has a multiplayer mode but I struggled to find a match during the review process of the game due to the lack of players. The mode is basically the same as Sandbox but you will be able to play with and against other players on the world map. Ubisoft will also be adding a co-op mode to the game in the coming months too which will let you build an empire with another player.

Anno 1800 successfully delivers a fantastic city management game worthy of the dozens of hours you will most likely put into it. Its 19th-century setting makes for a great visual wonder as you build your city from a farmland into a sprawling empire full of factories and busy town squares. To see it all come into shape is one thing but to sit back and manage all the underlying systems to create a well-oiled machine is another. It is a satisfying use of time and something all RTS fans will enjoy. As for newcomers, there is a great sense of accomplishment here for those who tackle mastering Anno’s complicated yet exceptional systems.