Anthem has a lot of great ideas going on at the same time. A beautiful open world to fly through as you embrace probably the greatest Iron Man experience in a video game, a deep RPG-like shooter system, and a story padded with so much lore that it will take days of research to understand it all. Unfortunately, other than the beautiful world, Anthem fails to execute any of its other qualities correctly at all.

What was meant to be a joyful experience with friends as we flew around, pumped missiles and bullets into a Titan and gathered tasty loot, resulted in one of the buggiest messes of a game with a convoluted story, game breaking glitches and some of the worst game design I have seen in years. There is so much wrong with Anthem right now that it is hard to find the right. From the moment the game starts, getting anything done is a chore. 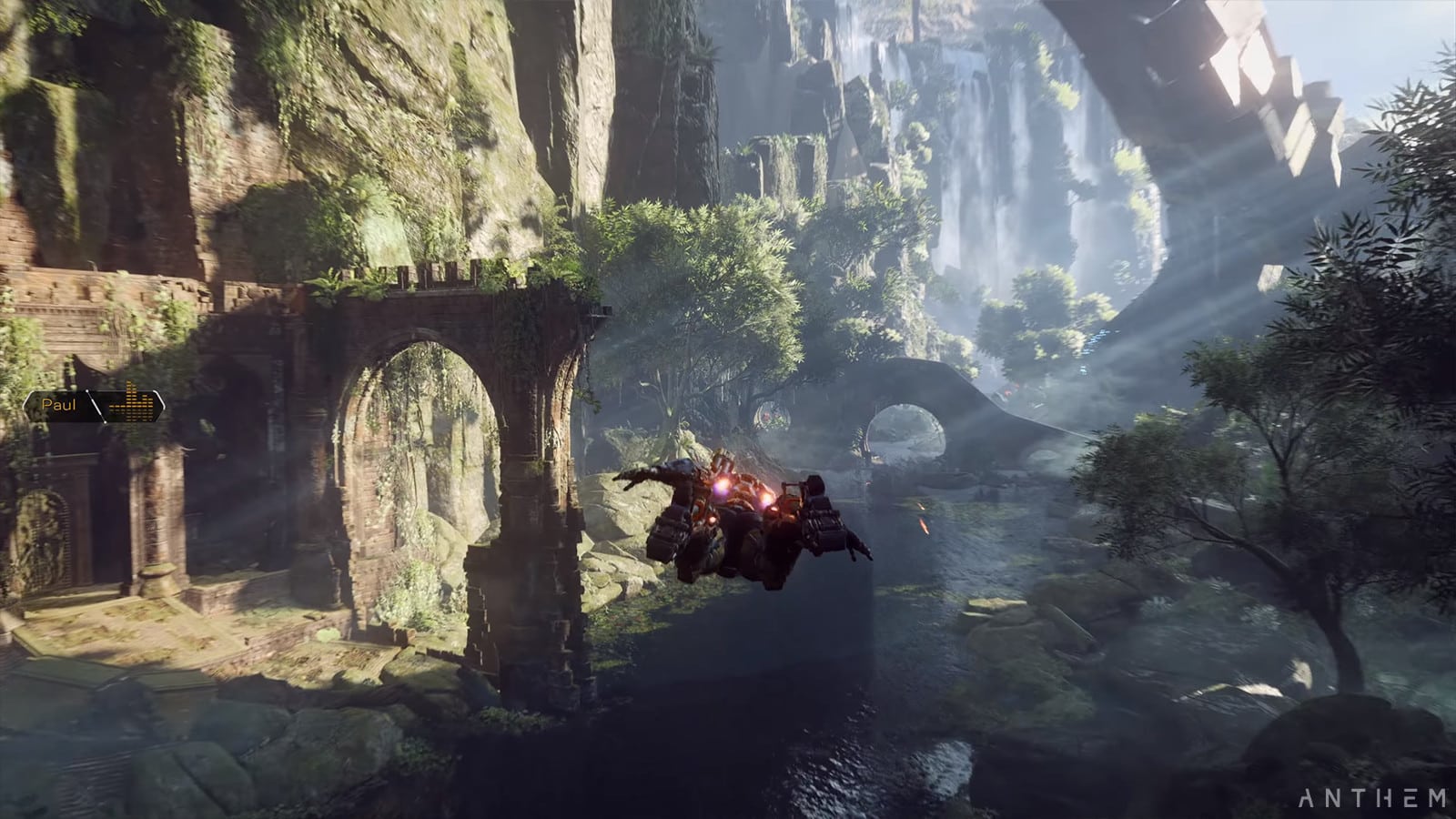 Anthem takes place on an unnamed planet as players take on the role of Freelancers. These people act as the world’s protectors and defend humanity from the dangers of the outside world. Freelancers control these great mech suits that come in a range of classes from the agile Interceptor to the powerful yet squishy Storm Javelin. The main story of Anthem revolves around the Anthem of Creation as a villain known as The Monitor tries to take control of this relic for some reason.

When I say “some reason” I mean it. Anthem’s story is delivered poorly as it requires you to sit through boring pages of lore to read up more on each of the game’s background stories to understand what all these relics, people, events and locations are about. It is fun for the first few hours but soon after, it becomes a chore. The only exciting moments lie in the cinematics that delivers fantastic facial animations with stellar voice acting and some great set pieces. In short, you need to save the world and you make use of your Javelin to do so. At its core, the gameplay revolving around these mech suits makes Anthem what it is and you can look past everything it does so poorly and appreciate the polish in the combat, how each Javelin feels so unique and how much fun you have while controlling it throughout the game.

Each Javelin revolves around a specific class-like system. The Ranger is an all-around balanced suit, the Interceptor is fast and is all about getting into the action and out as fast as possible, the Colossus is a tank that can withstand a load of damage but is slow and the Storm is all about DPS and AoE attacks. I played with the Storm and a bit of the Ranger and the two are very different. It requires a bit of time to get the feel for each of them as not only do they all move a bit differently, but their abilities are very different too. 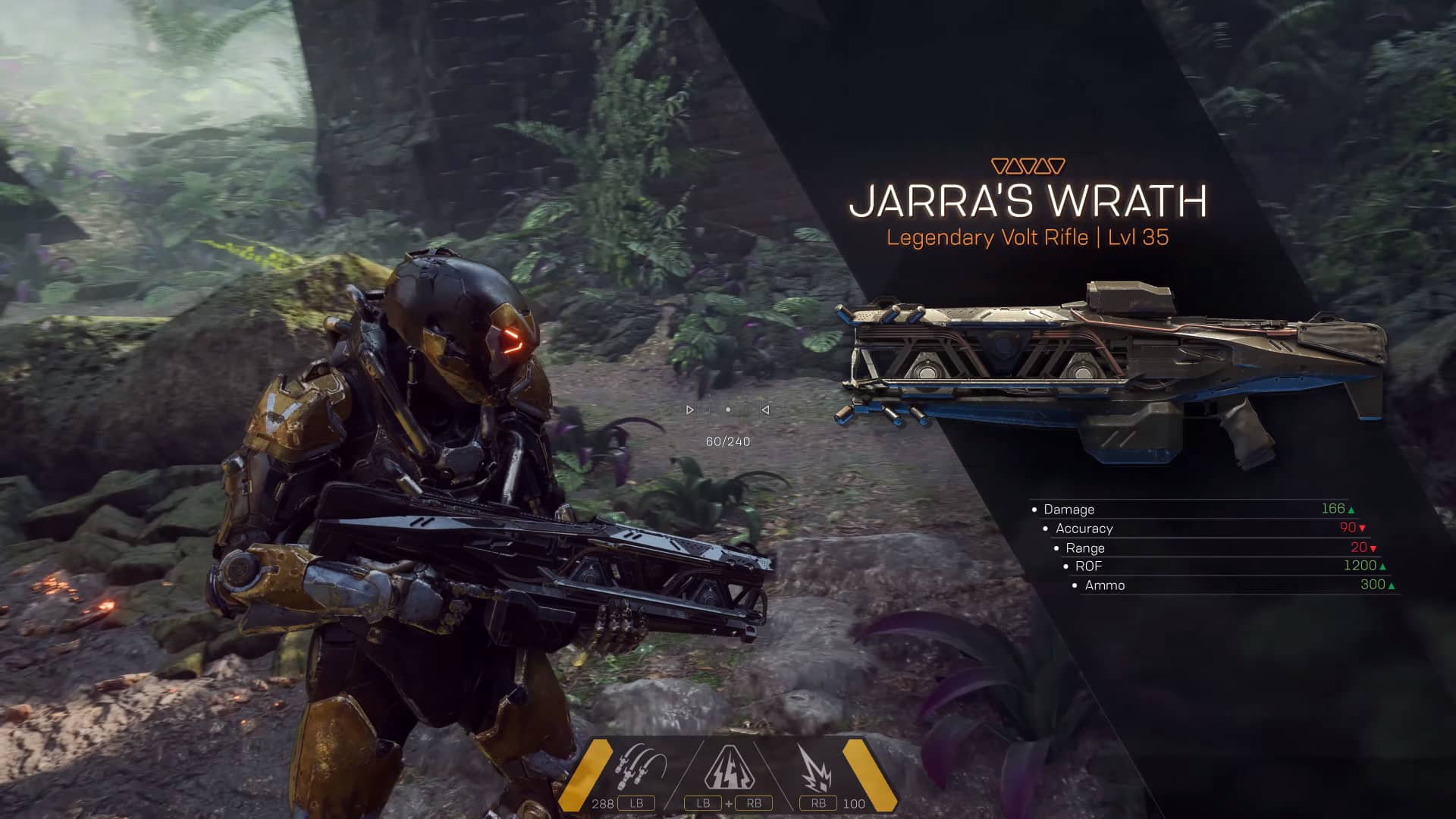 This is a lie. You CANNOT pick a weapon up and equip in during a mission

Each Javelin has a specific loadout that changes its abilities, weapons and components which act as buffs and perks and a support ability. Unlike traditional RPGs, you have to find these abilities in the form of equipment and spec your Javelin out the way you prefer. The early parts of the game will make no sense as the game explains things poorly (there is a trend here) but as you go on you will learn that you need to stick to an ability and use it on enemies to gain the ability to craft higher Power versions of it.

You could also just not craft a higher power version of it and wait for it to drop from enemies but the game’s loot pool just drops random items instead of prioritising a piece of gear. The gear system also revolves around a power level that slowly increases as you level up by earning XP through the various events in the game. The higher the power, the rarer the gear and the stronger you are. But in order for all this to happen, you need to level up your player level with XP you earn.

The loot system is not all that bad. Later game content rewards purple gear and then masterwork weapons which are the rarest and have the most perks. This means that even after you complete the story, there is a lot of grinding that can take place in order to max out your level, increase your Power level and get the best gear drops.

The end game means you will also start to create loadouts with different gear that compliments different guns and abilities. Some loadouts will be tankier while others will be based on priming the enemy with debuffs while other players use Detonators to perform attack combos. This system is Anthem’s deeper combat cycle that adds a layer of expertise to the usual point and shoot mechanic. The entire game revolves around priming your target with attacks, taking down shields with lightning or grenades and using combo attacks to vanquish your foes. 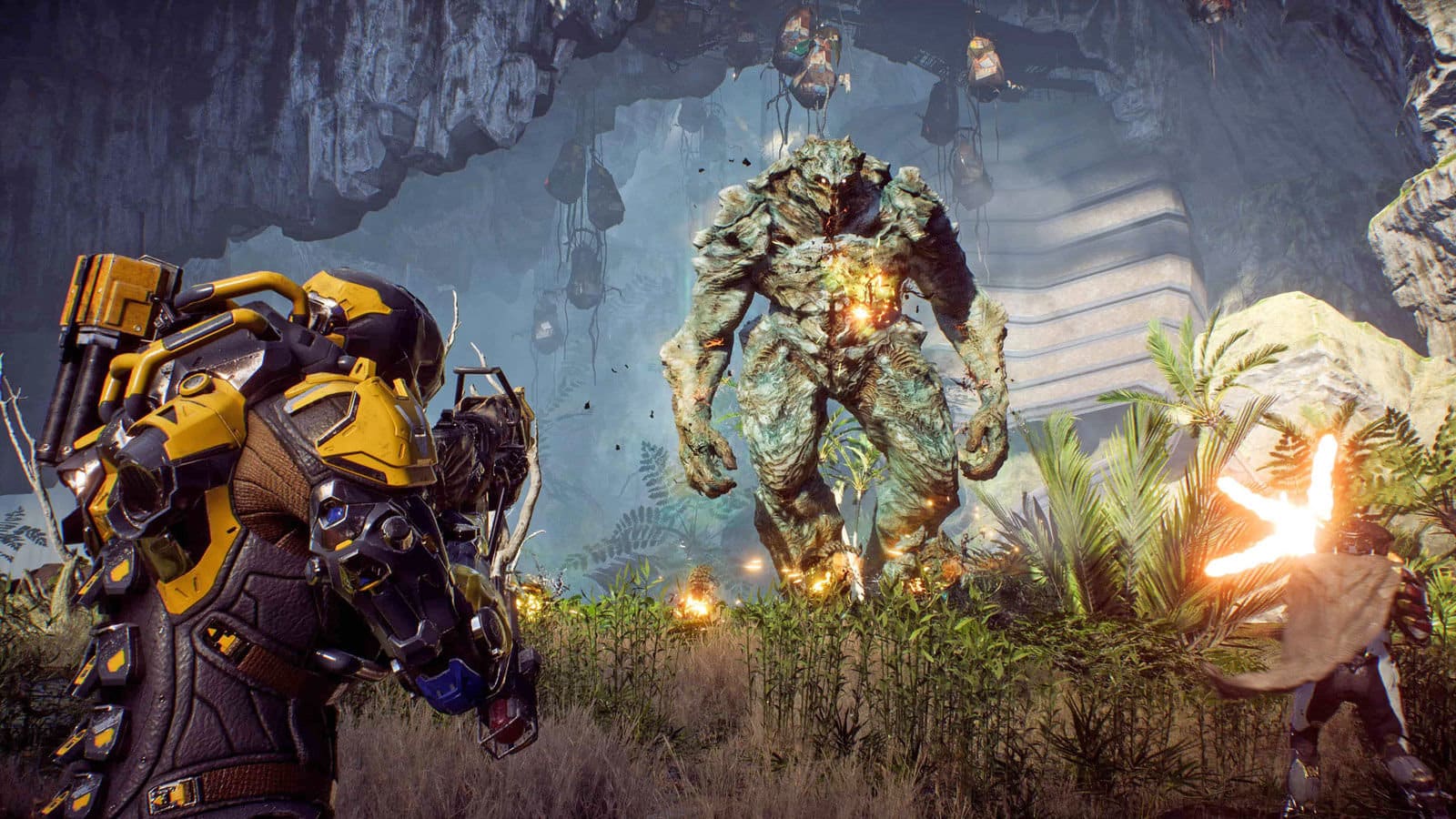 Enemies also come in different varieties and while I hoped for more, they offer a great range of different approaches. Titans are massive stone brutes that can only be attacked by shooting weak points. Dominion Elementals are Storm Javelins that hover above the ground and require you to take down their shields before you can deal damage. Scars come in all forms such as snipers that will shoot you out of the air even while flying and massive brutes with flamethrowers that cause you to overheat. And the most boring of all are the shapers are spider-like scorpions that don’t really add much to the game.

Exploration in Anthem is fun and most likely the game’s best feature. Flying around the giant open world as you try to not overheat by flying under waterfalls and through ponds gives you this feeling of being in a mech suit. The sense of freedom while exploring the world is true to the game’s scale and it works. However, the open world, while gorgeous is boring and dull in terms of things to do. There is an odd World Event that pops up every so often and completing them grants you gear but it is just shallow. The execution of the world and how you navigate it is also extremely poor. You cannot put down pins to help you navigate through it nor can you fast travel to any point. You also have to respawn right at the start if you die and no one comes to save you.

Yes, sometimes the game loads into this beautiful shade of yellow

These missing quality-of-life issues persist throughout every aspect of the game. Everything becomes a chore in Anthem and apart from the constant crashes, performance issues and server disconnections, the game just fails to work with you. When Anthem works, you sit looking at the same three images loading on your screen most of the time. Everything loads from entering the Forge to change your equipment to entering a cave that even forces a loading screen when a teammate enters it.

The loading screens don’t do anything to help the issues at all as the bugs are everywhere. From not getting rewards at the end of a hard mission because for some reason the game does not tally your XP and hand out gear to simply missing out on an item because some random player progressed further into the mission before you could pick it up. 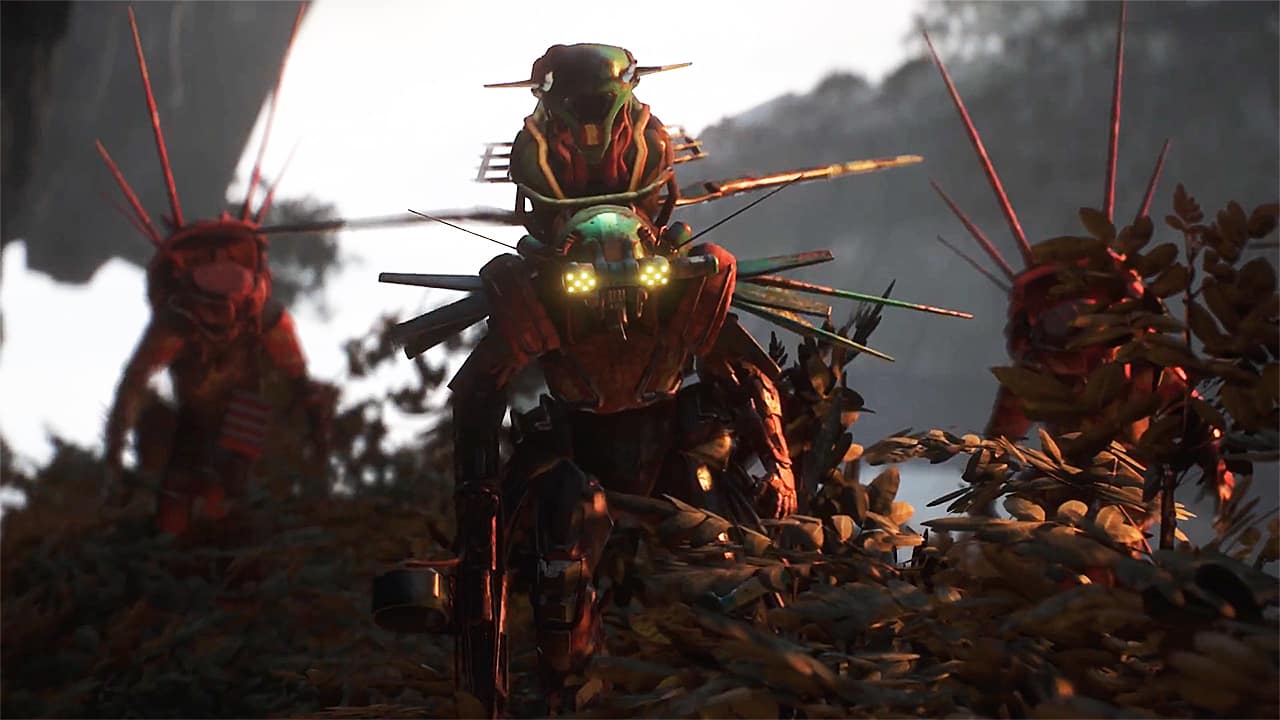 In one particular mission, I had to completely restart my game because the other players got stuck behind a checkpoint wall and I died on the other side. There is no option to do anything while in the downed screen. You cannot restart the mission, enter an options menu to return back to the Fort or even send an in-game message. All you can do is exit the game and boot it up again. How this happened is beyond me and is simply bad game design.

The game also lacks any player freedom when it comes to your loot. All loot you get can only be fully obtained after a successful mission, if you are lucky that is. You cannot change any gear at all in a mission either so what you go in with is what you have to deal with throughout the mission until you finish it. 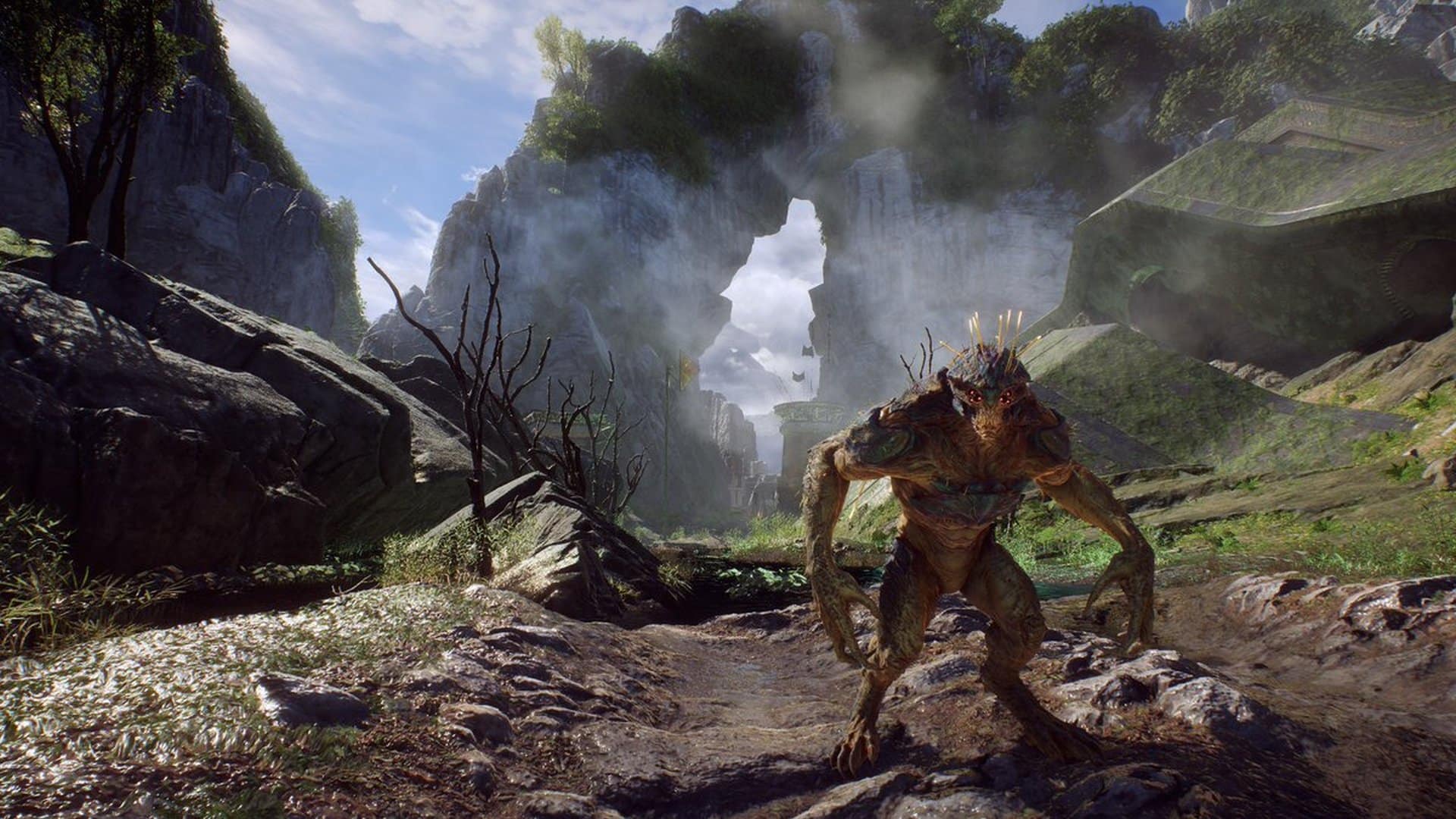 Even playing with friends is a chore as you cannot just join on a squad or join a player during a mission unless you were already in that mission and get kicked due to the hundreds of bugs and server issues. It is just the simple things that are not there and makes you wonder why. Why do I not get loot if your game bugs out on me? Why do I not have the ability to change my gear on the go? It simply makes no sense.

Anthem does have some great moments though and this is during the Stronghold missions. These long and challenging stages are all about teamwork as you explore some great locations, complete some challenging sections and get rewarded at specific checkpoints. They are fun and great with friends even though the game only features a measly three versions of them. 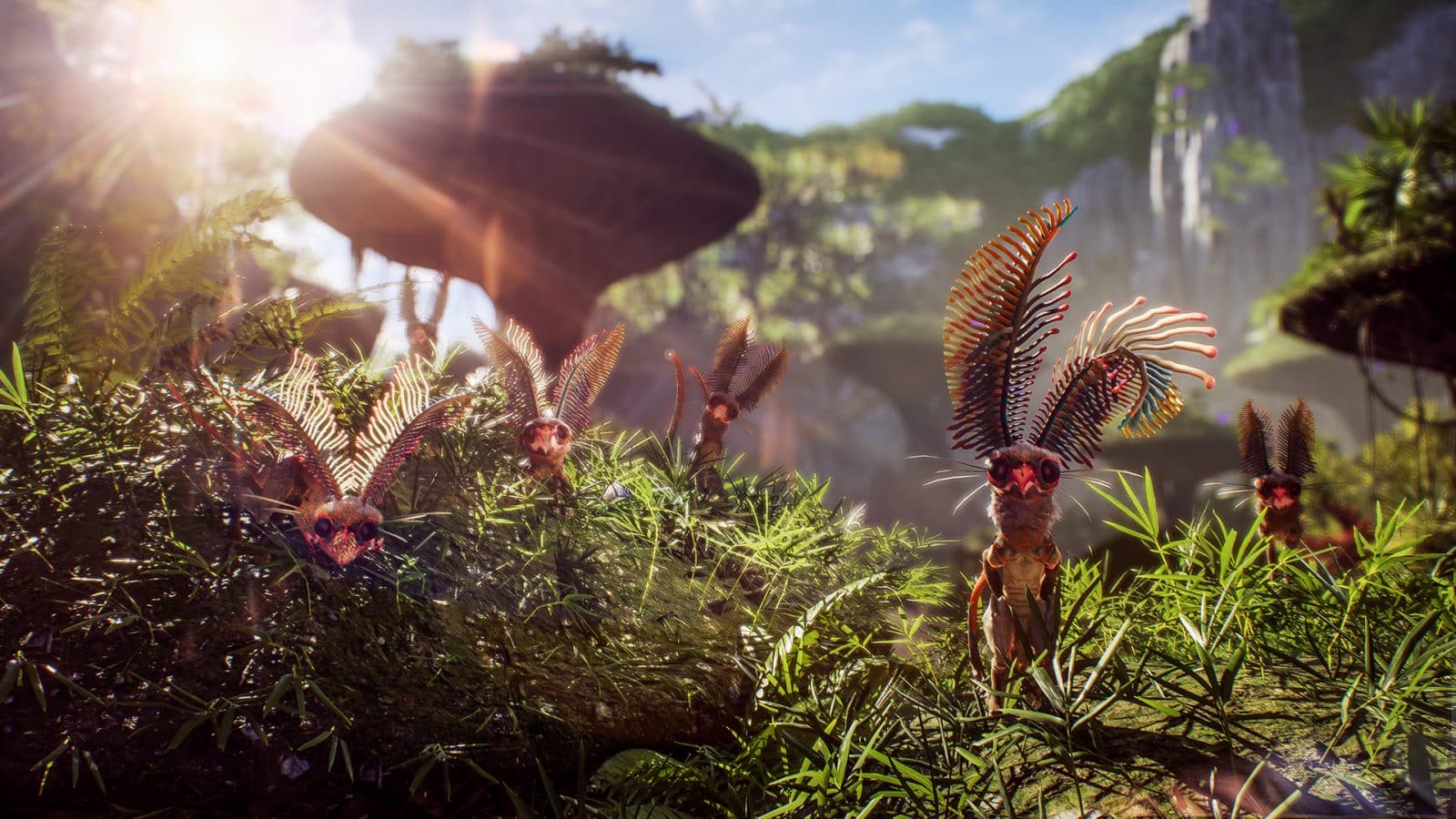 Anthem is not a bad game but it has a bucket load of things it does so badly. The bugs and server issues are just part of them and once BioWare fixes that, they have a lot of work to do to improve the game’s experience. It needs work and a lot of it. The best moments are overshadowed by the poor design of the simple things like the menu system and the lack of thought put into things like the respawn menu. It is hard to play without these issues getting in the way of the great combat there is on offer.