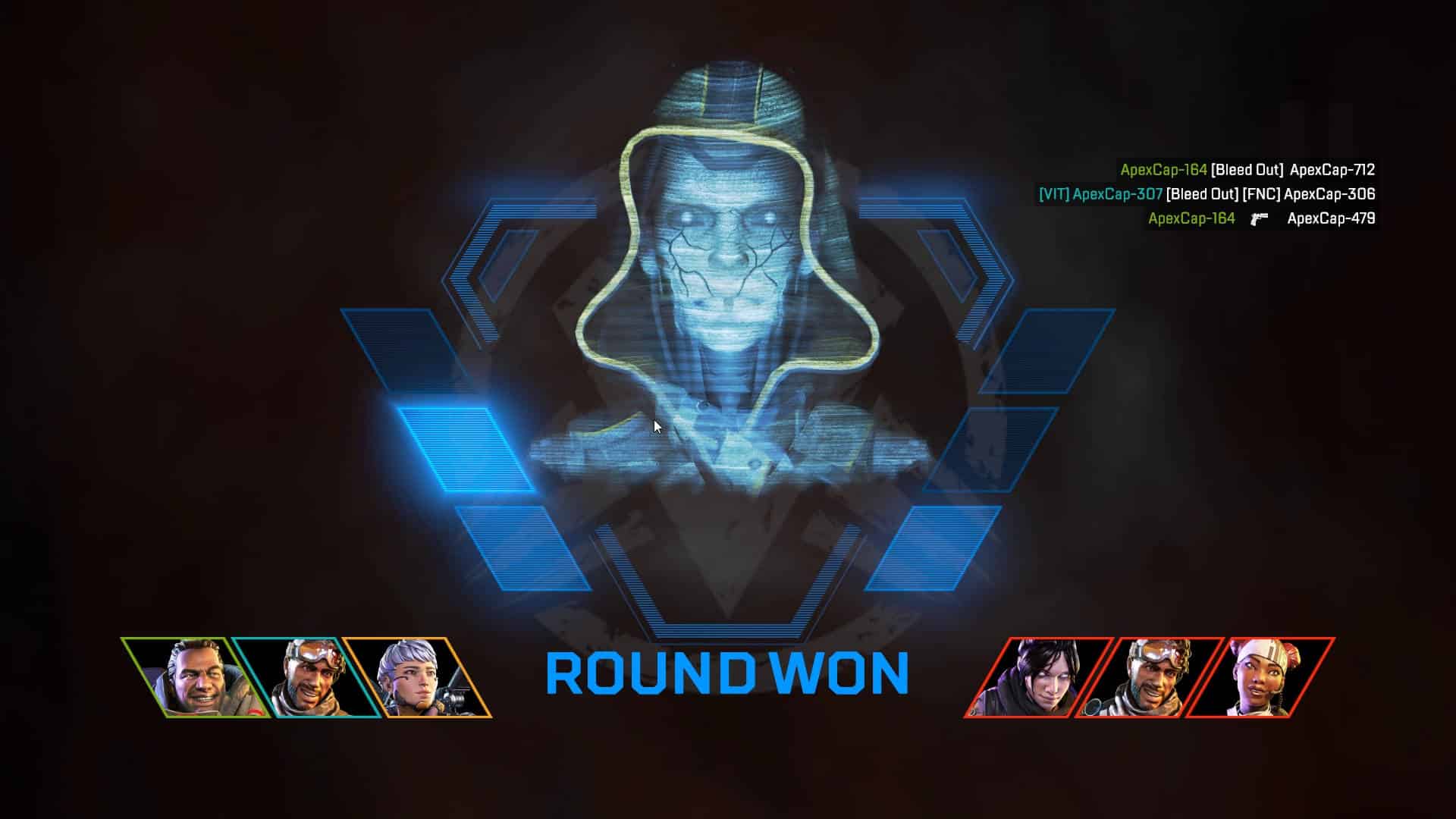 Season 9 of Apex Legends marks one of the most substantial changes to the game’s formula. Not only does the new season introduce a new Legend, Valkyrie but she is also the first character to have a direct relation to Titanfall.  Of course, many of us saw this coming seen as the game is set in the same universe but it is the first direct link we have had. Valkyrie is none other than the daughter of Viper, the antagonist from Titanfall 2. There’s also the Apex Legends Arena Mode which is mad fun and other changes.

Valkyrie boasts some cool abilities that kinda make her feel like a human titan mash-up. She can soar into the air miles above the ground and rain down rockets from her rocket rocket-powered jetpack. Her ultimate lets her in a way redeploy her team as she sends everyone into the air and lets them land somewhere else. She can also scan the recons… useful if you need it. 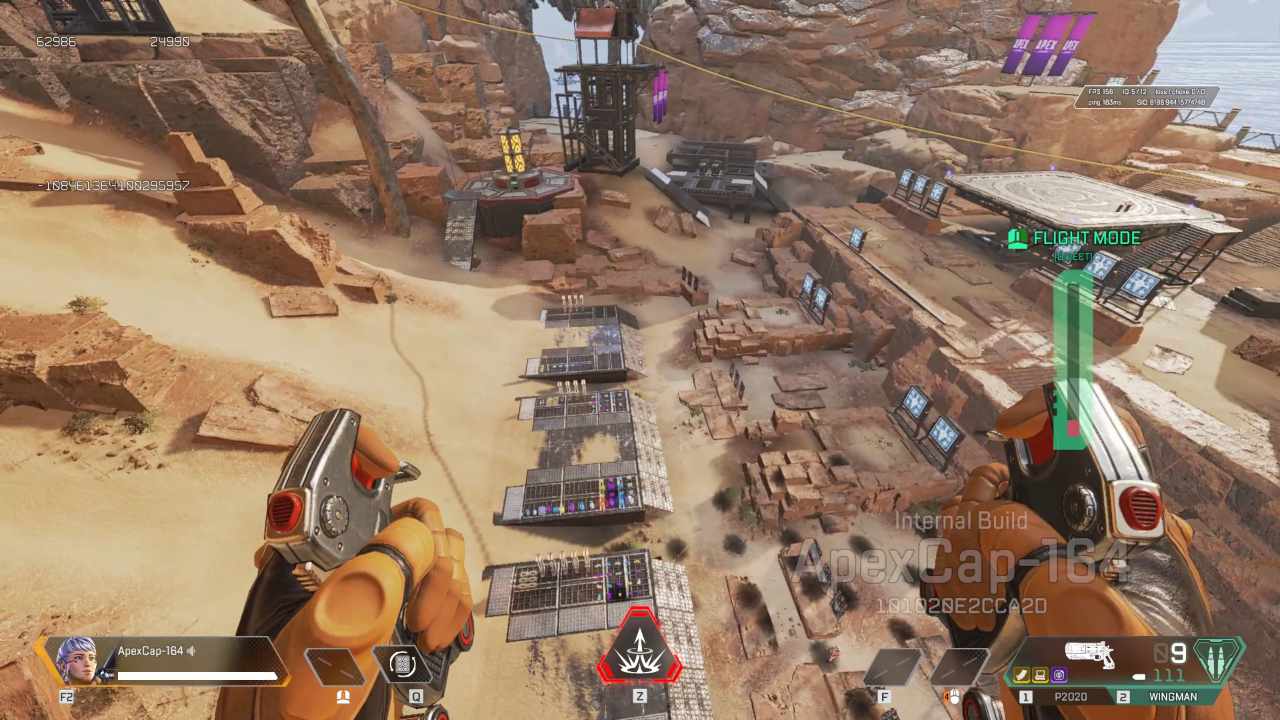 But if a new Legend does not scratch the itch for you then Apex Legend’s new mode called Arena might. This new mode is a 3v3 PvP competitive arena shooter with quick matches, tight gunplay and some intense action. Players can take literally any legend that they have into the mode and approach the gameplay using their skills and abilities. The mode includes its own standalone shop system where you can purchase items and weapons in between rounds and yes, if it sounds like Valorant then you are not wrong because it is.

The new mode will completely switch up the landscape in Apex Legends and if anything, might be tough competition for current competitive games on the market. So far, it works even though some characters might need some balance tweaks here and there to get them to mould better into this 3v3 PvP competitive mode. 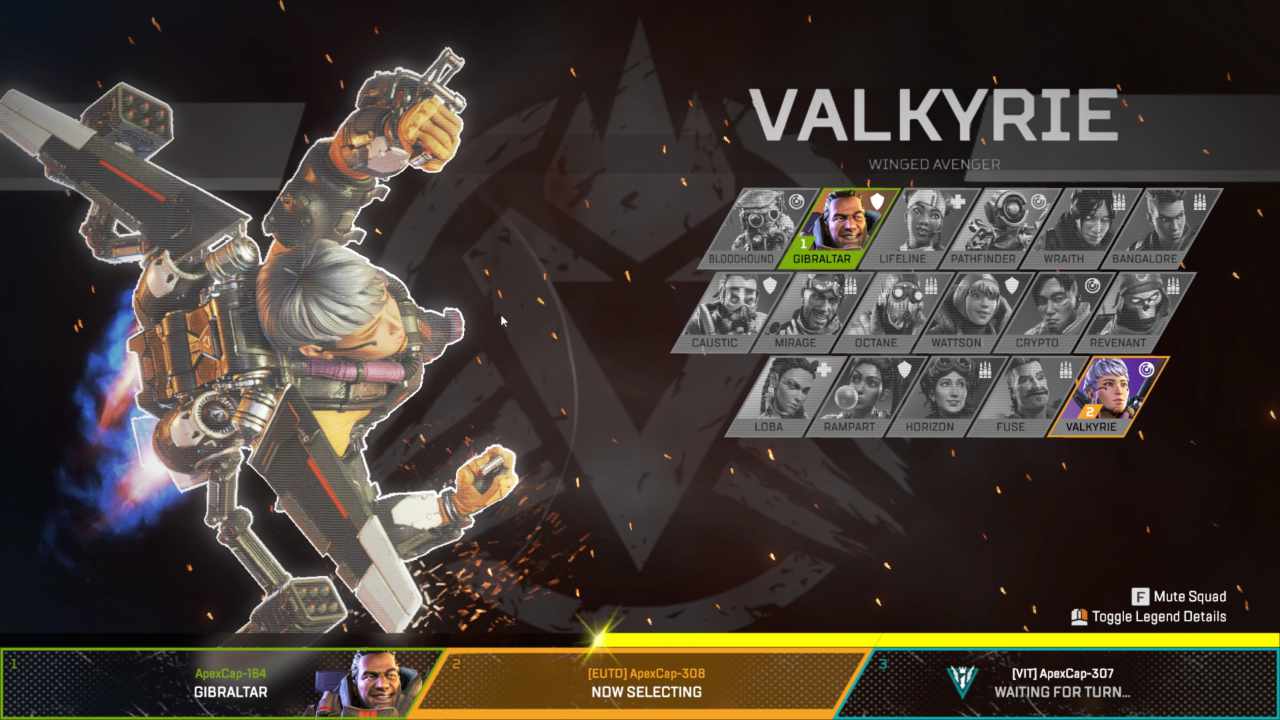 Then there’s the new weapon which is a bow. Bow Check is a brand new type of weapon too that uses its own ammo and may hint at a whole range of new archetypes to come. It provides a mid to long-range combat approach while forcing players to take their time to draw back their shot and release when the perfect moment arrives. Sure, you can spam a weak pull but it won’t be as effective.

We also have two new hop-ups. One of them is the Shatter Caps that turns the standard bow pull from a single shot into a shotgun-like spread. The other is Deadeye’s Tempo that lets player time their bow shot releases and when they get perfect timing, it increases the fire rate of the next shot. This also works on the 30/30 repeater. 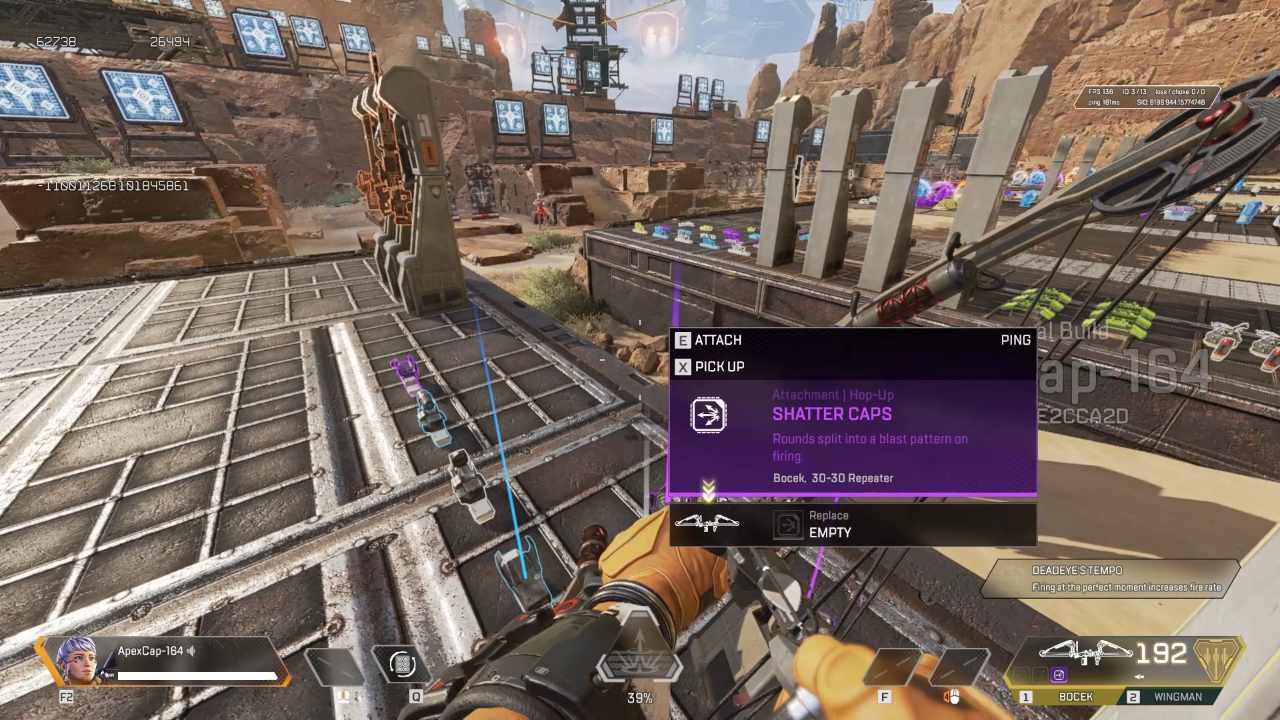 There are also some minor changes to the Olympus map but I never got around to seeing them. Mainly because I was stuck (and pretty addicted) to the Arena mode during the preview evening. This leads me to the biggest part of this preview, the actual gameplay in Apex Legends Arena.

It is important to note that this mode is permanent on Apex Legends which means you are going to either love it or hate it. While Respawn doesn’t have any intentions of abandoning the battle royale mode, they do have lots of support planned for Apex Legends Arena. This includes new maps and tweaks. It is only expected from them given the game’s current 100-million player base. 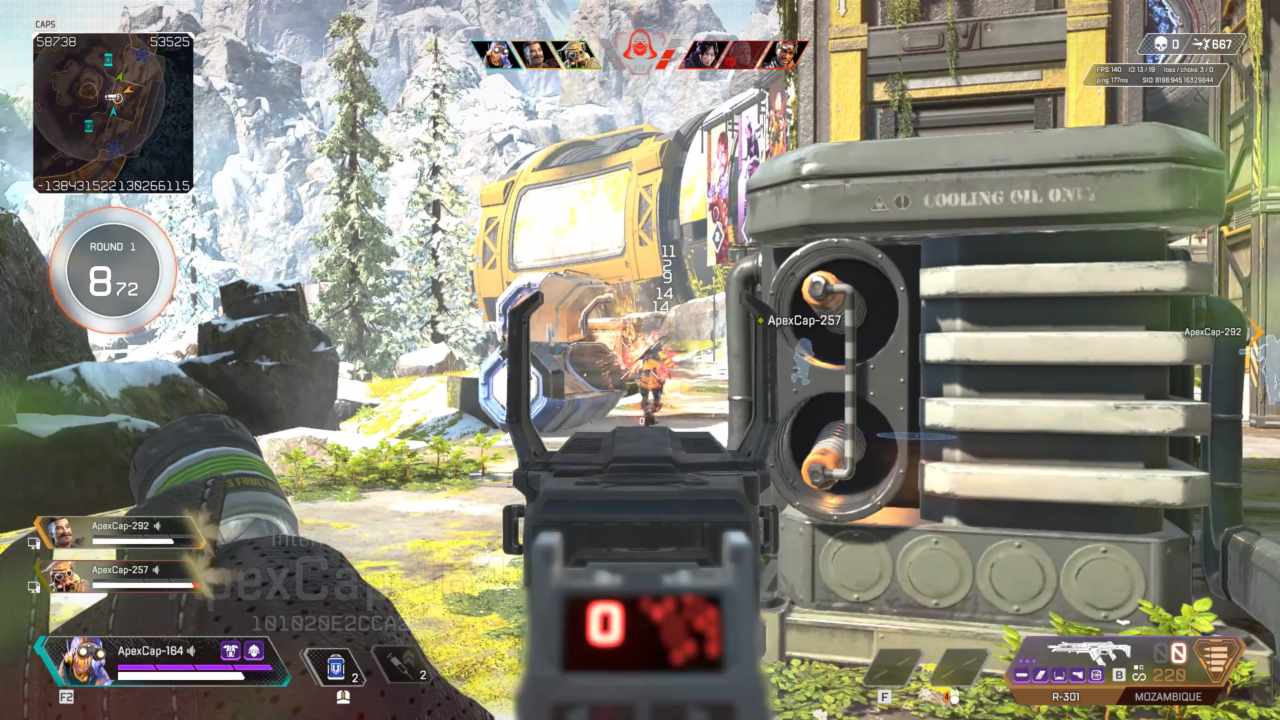 A typical match in Apex Legends Arena sees you choose a Legend and head into a small-scale map along with two other people. If you have played Apex Legends before then the gameplay will feel familiar. You can ping and the callout system remains intact. This is a big help given that you will most likely go into this mode with randoms if you don’t have a squad to join.

What makes the mode feel as authentic to the Apex Legends recipe as possible is the ever-shrinking circle. While a round plays out, the ring closes which forces you and the opposing team to constantly focus on the centre of a map. Sort of like that that last ho-down you have in the battle royale mode. It pushes you inwards so you can’t play the perimeter. 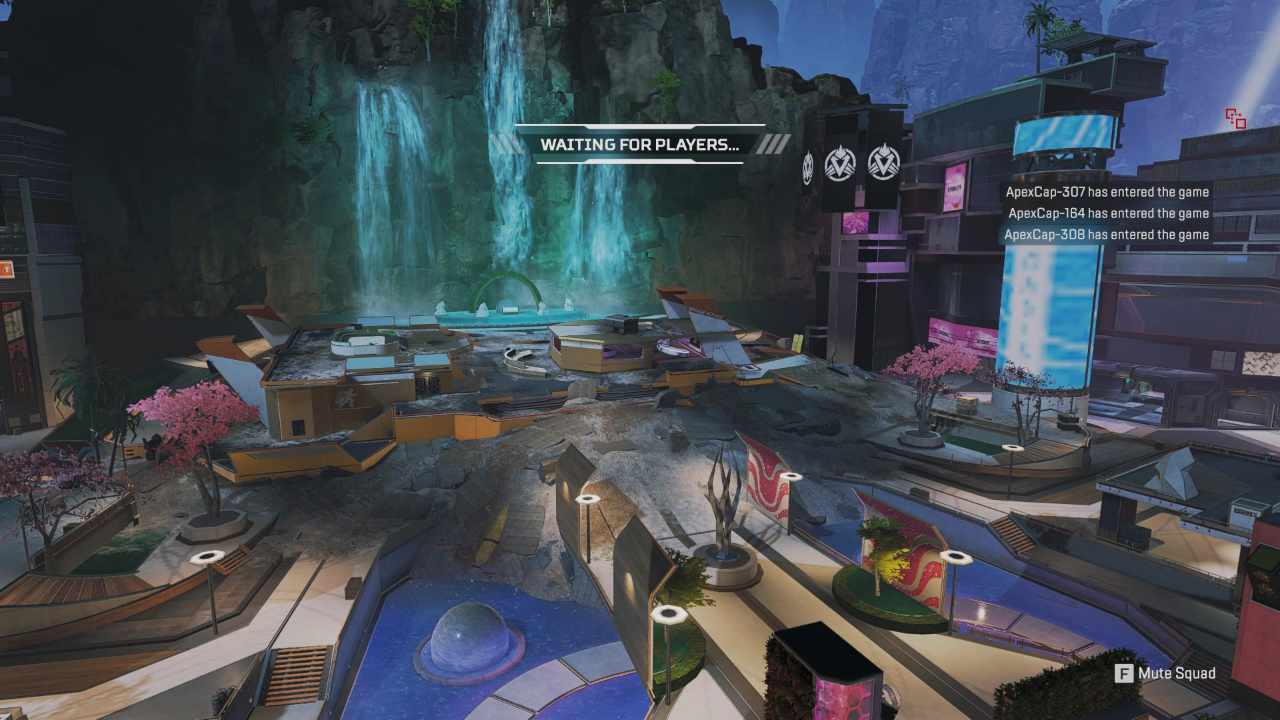 All Legends that you have unlocked are playable in the mode. In addition, all currency and crafting materials can be earned in this mode too. It is fully integrated into the game’s free-to-play model. Even skins, banners and other visual unlockables will be there.

The game mode feels fresh right from the start. There’s a new Legends selection screen and you know you’re playing the Arena mode. Going into a match starts off with each team spawning on either side of the map. A countdown locks you in for thirty seconds. During this time you can purchase items using the currency each player starts with. You start with a set amount of currency that lets you purchase base weapons. Don’t expect anything grand at first as you need currency to buy better gear. You get currency winning rounds and eliminating enemies. You also earn currency if you lose but it is not as much as winning. 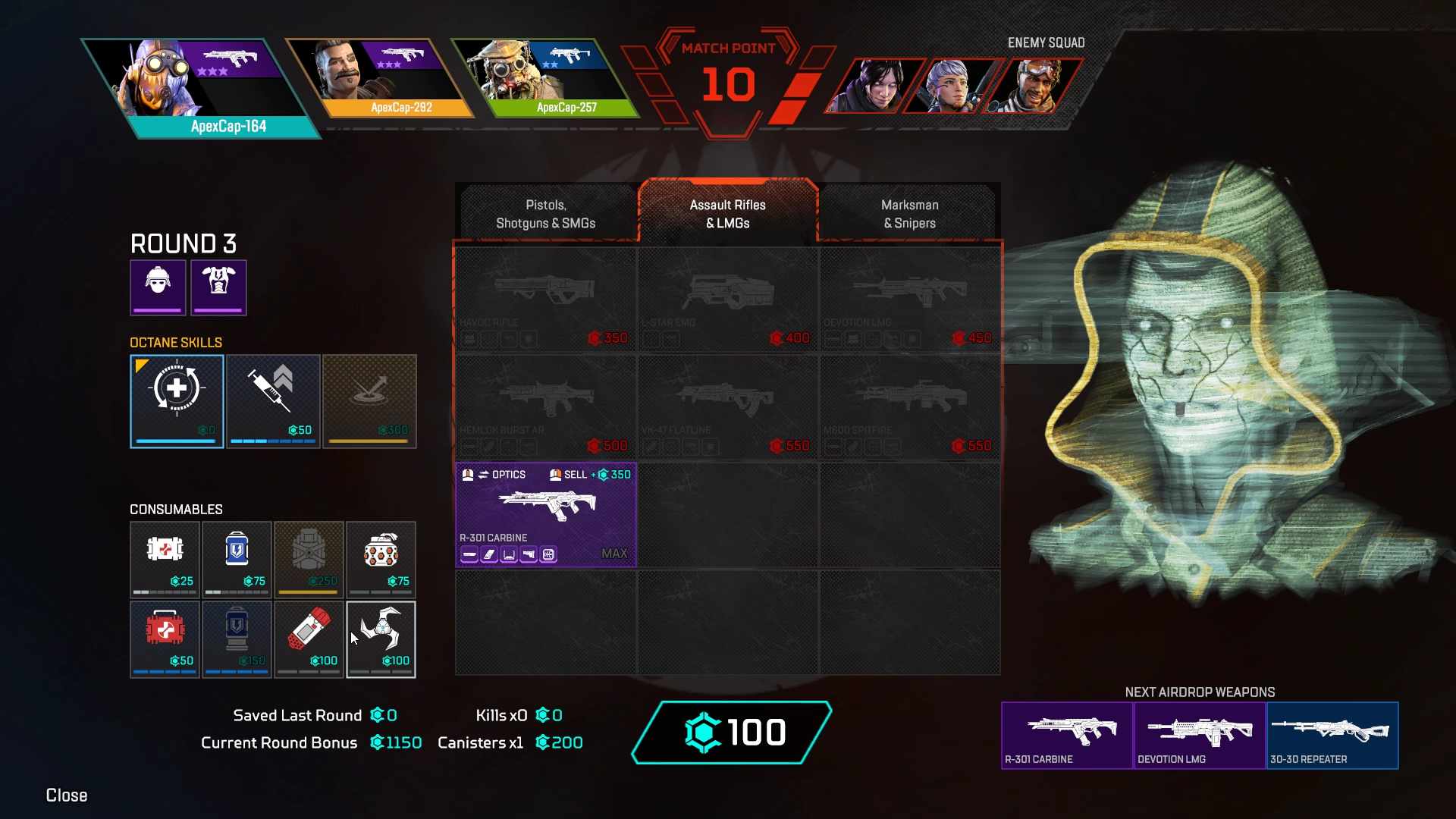 The currency system plays a big role in Apex Legends Arena. It is used to not only purchase weapons but also to purchase multiple of your skill. Instead of a cooldown on a specific skill, you can use it multiple times if you have purchased more than one. For example, Octane’s Stim can be purchased up to seven times and used in concession. His passive is available automatically and does not cost anything. His ultimate is not available on the first round and is something you need to purchase.

This means you have to weigh up what you wanna buy and when. So if you want the ultimate ability on the first round then you can buy it but you won’t be able to afford a decent weapon. You can buy a pistol or a bad shotgun, the Mozambique (LOL). Basically, you have to either know what you want or work as a team to discuss who is buying what for which round. You also need to keep in mind that consumables also cost currency and weapon attachment quality are only unlocked through an “upgrade” and these will set you back too. 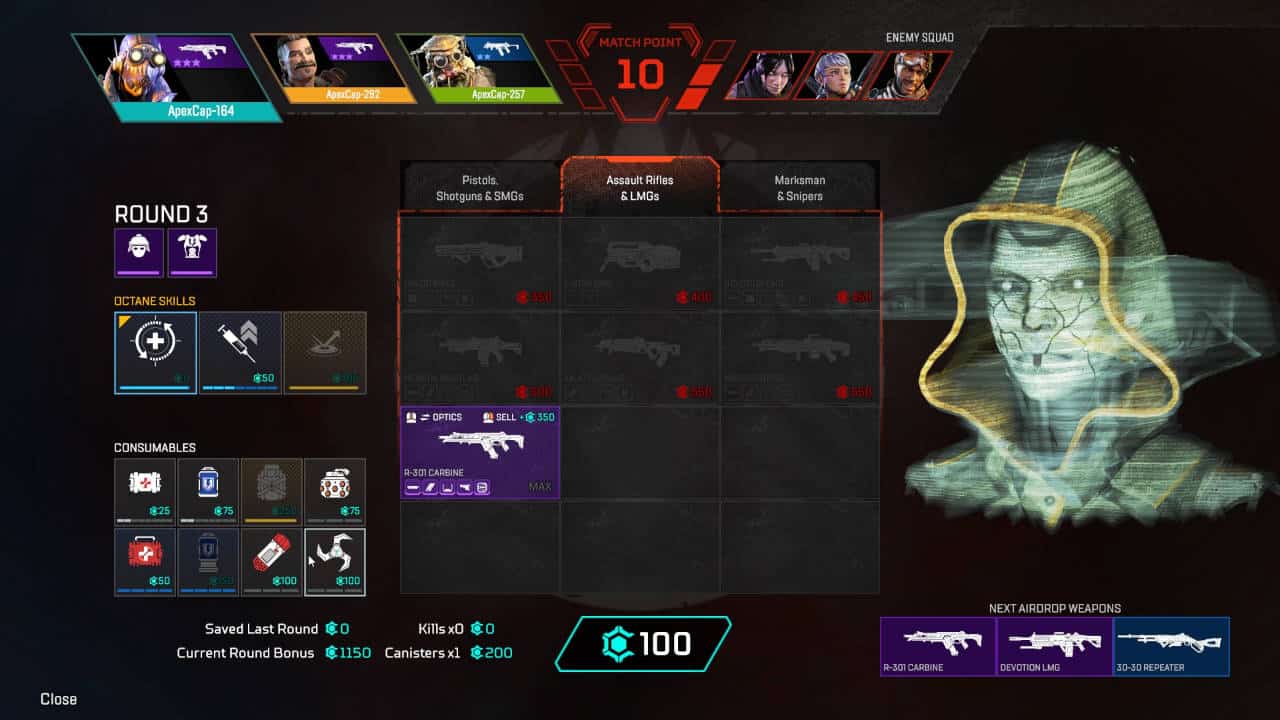 You also lose your weapon at the end of a round. So it is a gamble whether or not you hang onto your currency for a better weapon and an upgrade in the next round or you just scrape by with basic gear. This already makes the game mode quite exciting as every round will play out differently thanks to your ever-changing pool of currency and gear.

As for the matches themselves, this is all determined on your loadout and every match I played resulted in an intense fast-paced shootout between my team and the opposing one. This is thanks to the incredible map design that has seen iconic locations from the main battle royale maps added to the mode but in a closed-off area. One map was based in King’s Canyon. Others in Olympus and World’s Edge. If you play the battle royale mode then jumping into these maps will offer a familiar take on the environments while also forcing you to play across a small-scaled area. These locations have been chosen to fit the 3v3 mode so they offer tighter gameplay than ever before. 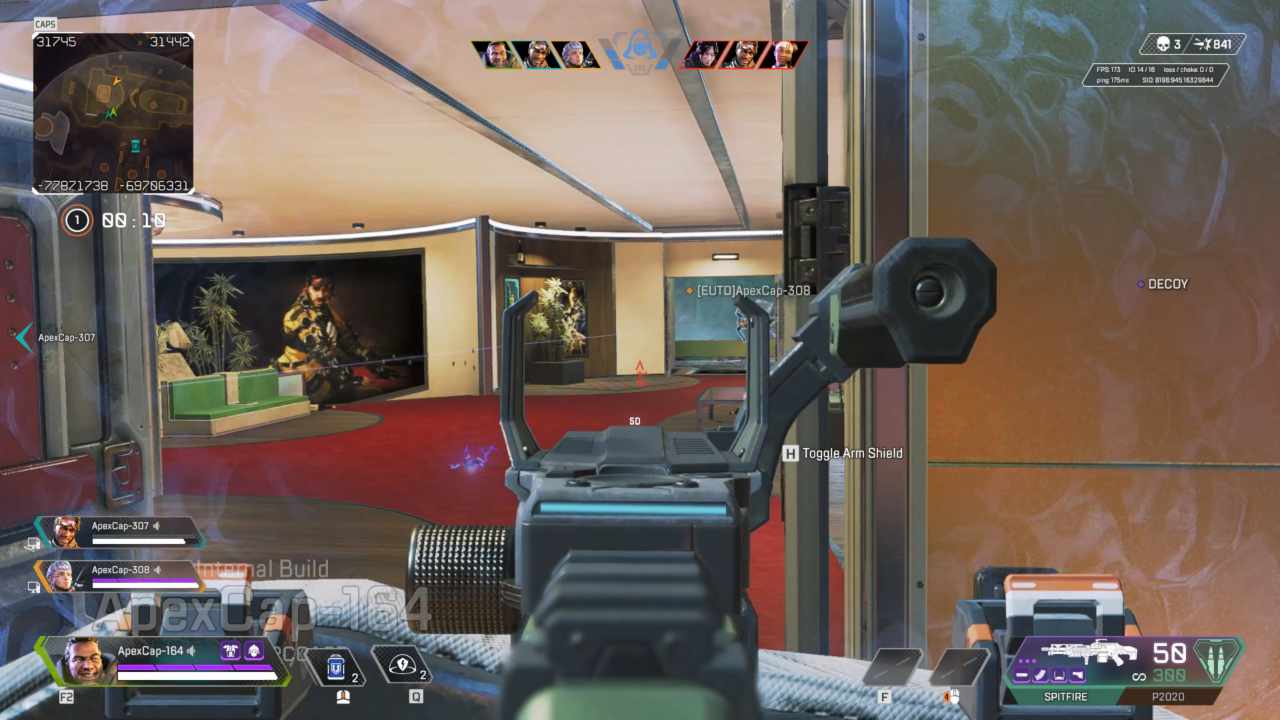 Every match in Apex Legends Arena is fast-paced and intense. In a way, the Arena takes those close-call encounters you usually have in the battle royale mode and places them into a round-based competitive nature. You jump in, quickly hunt down the opposing team, shoot a lot, spam abilities and buttons and either die or win. These round never last long. Some of them went as long as three minutes but they can often end within seconds. It is over in a blink. I went from carefully purchasing and planning a loadout to seeing it all wasted a minute later. Before I could rage about a loss, I was focused on the next round. Competitive players are going to love this.

Apex Legends “Legacy” season kicks off on 6 May 2021 and is going to be one you should definitely jump into. The Arena mode alone offers a brand-new experience to enjoy and it suits the game perfectly. Sure, we may have some balancing issues that need to be ironed out at first but Respawn has now delivered a whole new genre of competitive gameplay into Apex Legends and I can’t wait to see where it goes.

We will have more coverage to share later this week on the Apex Legends Arena mode and Legacy season including some gameplay videos. Stay tuned.