Apple hosted its annual September event and like past years, this one was packed with new iPhones and Apple Watches. The company also showcased a new iPad that isn’t part of its Pro range. Apple also didn’t mention a release date for the anticipated iOS 15, WatchOS 8, iPadOS 15 and MacOS Monterey. Hopefully, we will have an update on that soon.

Let’s break down all the announcements during the event. 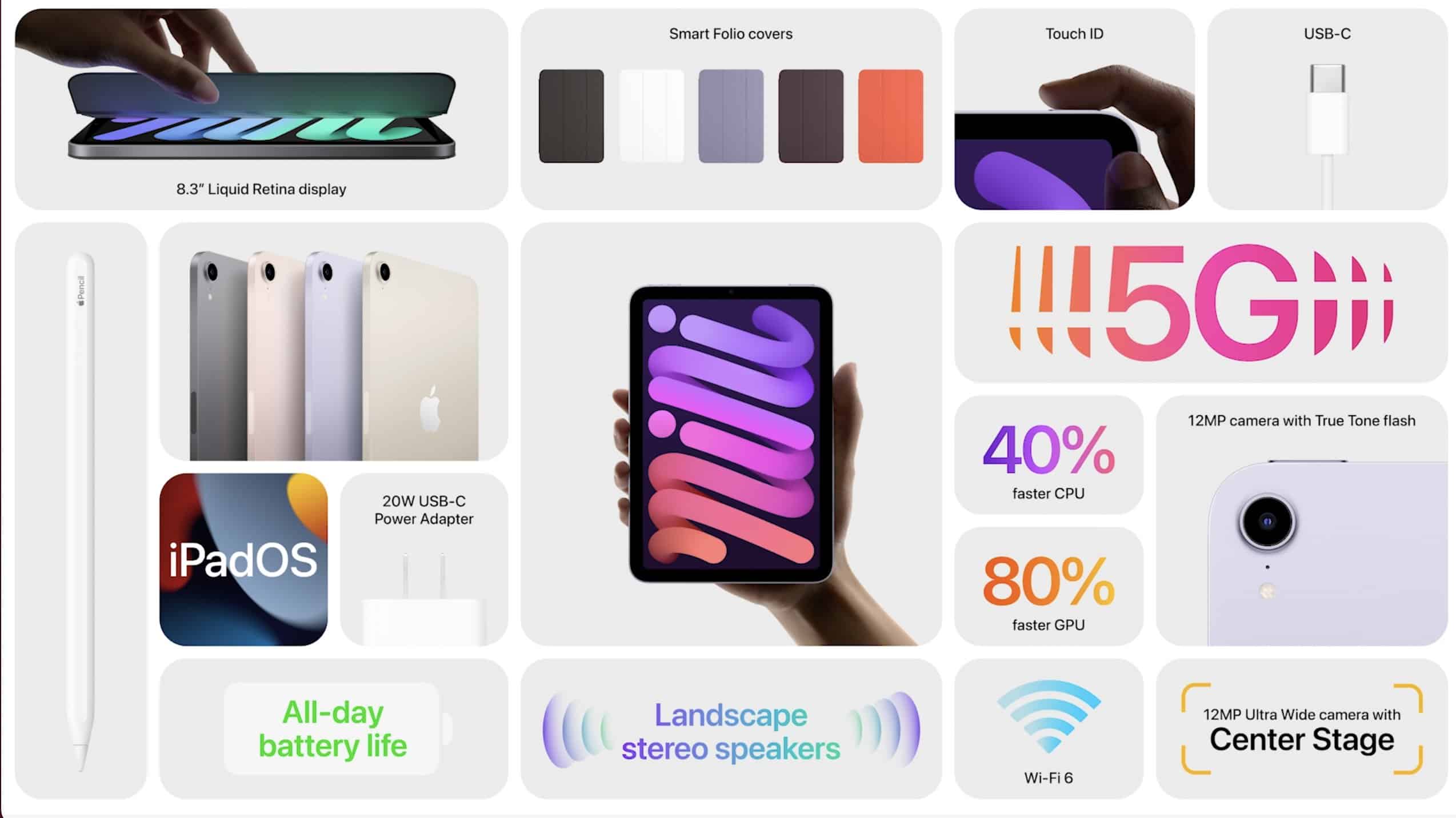 The new iPad 10.2-inch features a Retina display with True Tone. Apple has included a new 12MP front-facing camera with Center Stage, double the storage and a new Apple A13 Bionic ship. Apple claims the new iPad 10.2-inch is 20% faster than the previous model. This model also support the Apple Pencil gen 1 accessory.

Apple has completely redesigned the new iPad Mini. It now features a Liquid Retina 8.3-inch display with decreased bezels and a brighter more vibrant screen. The iPad Mini can reach a peak brightness of 500 nits. It also features Apple Pencil Gen 2 support and can charge the accessory by attaching it to the side of the device. iPad Mini has ditched the lightning port in favour of  a USB C port. It also boasts Touch ID and the front-facing camera is now 12MP. Apple has also packed this new iPad Mini with 5G support on certain models.

The Apple Watch Series 7 now boasts a larger Retina display. It is 20% larger and 70% brighter than the Series 6. Apple has utilised this new display across the WatchOS. Apps now use full keyboards for typing and watch faces stretch to every corner of the display. Apple Watch Series 7 includes a new durable design with a crack resistant display and dust-proof casing. Apple claims the watch also charges faster than ever with a 33% increased charging rate. The company says you can get 7 hours of sleep activity on just a few minutes of charge. The device also still packs its “full day” battery life. Apple Watch Series 7 comes in four colours including black, silver, green, blue and red.

Not much has changed when it comes to the iPhone 13. Apple has now positioned the dual cameras diagonally instead of above one another. It still features the flat-edge design but the biggest change is the smaller notch which means the OLED display is now bigger than ever and the screen-to-body ratio has increased.

Both the iPhone 13 and iPhone 13 Mini pack the Apple A15 Bionic chip that the company claims is a 5nm chipset. This 6-core CPU also includes new improved machine learning and a 4-core GPU. When it comes to the camera system both the iPhone 13 and 13 Mini now pack the same ultra-wide camera lens seen in the iPhone 12 Pro Max last year. This includes 100% Focus Pixels, 47% more light gathering and OIS. A big new feature on this year’s iPhone is the Cinematic Mode that allows users to record portrait-like videos while blurring the background and focusing on various parts of the shot. You also focus on something else while recording and it will shift focus and blur the image around it.

The high-end iPhone 13 Pro range also looks very much the same as the 12 range from last year but there are a few tweaks to the device. The True Depth Camera system is now 20% smaller which means there is a new slightly larger OLED display. “Slightly” is the keyword here because the display size is very much the same. Apple even says they feature the same display size. However, Apple is including the ProMotion Display on the iPhone 13 Pro range. This means the refresh rate can toggle between 10 Hz and go all the way up to 120 Hz depending on the app.

Games will run smoother than ever and apps will feel more responsive with the Apple ProMotion Display. It also comes packed with the Apple A15 Bionic chip that boasts the latest and greatest mobile performance on the market. 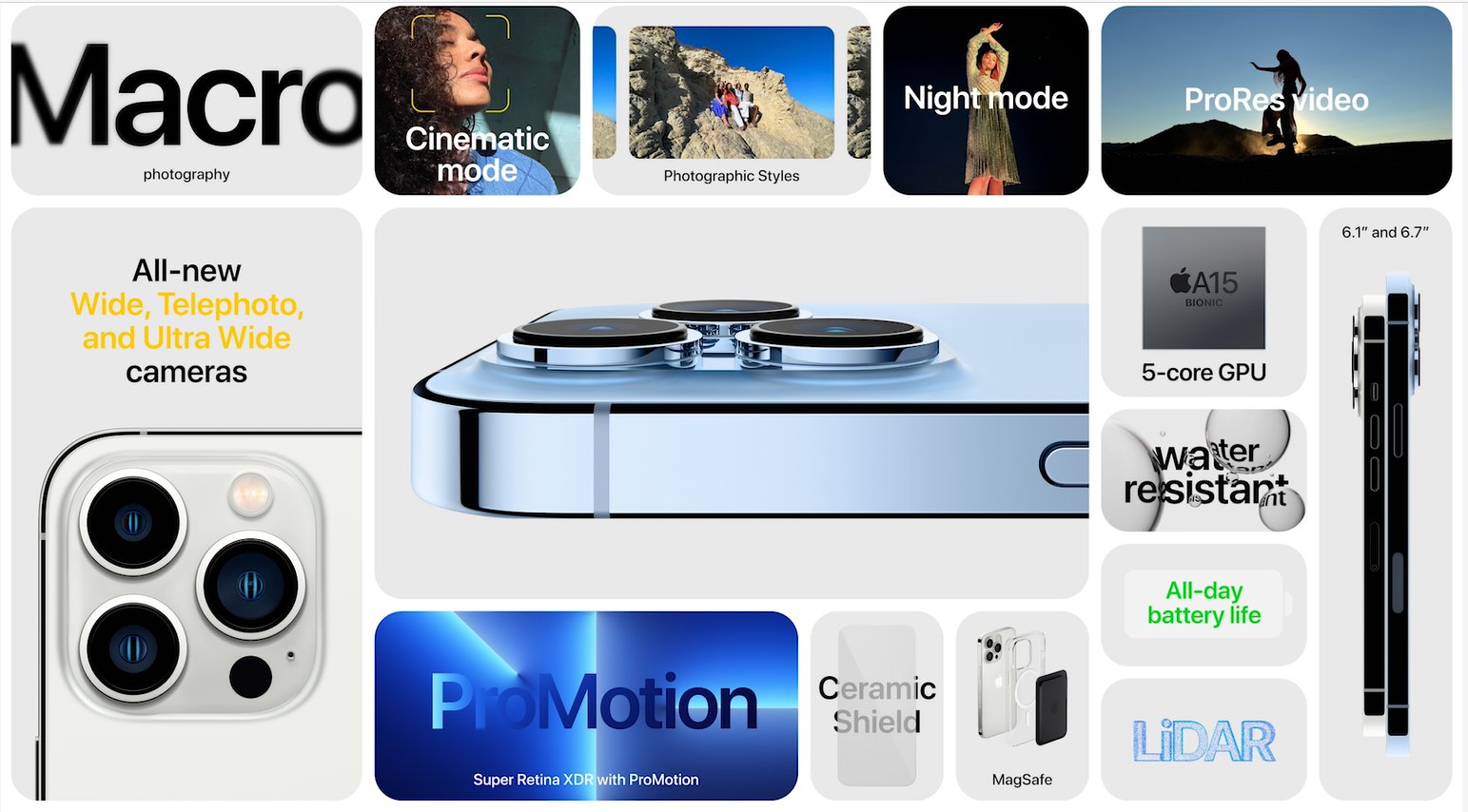 When it comes to the camera system the iPhone 13 Pro and iPhone 13 Pro Max comes with a completely new array. There is a Ultra Wide lens with 92% improvement in low light, a Telephoto lens with 3x optical zoom and 77mm focal length and a Wide camera lens with 2.2x improvement in low light. The Wide camera now supports Macro Photography too that lets users take up-close photos at up to 2.8cm. Apple has built this feature into the lens without the need for a whole separate one.