Over two weeks ago the ASUS ROG Strix Scar II GL504 arrived on my desk, ready for review. After catching my breath from reading the name out loud, I opened the backpack and pulled out this neat yet hardy piece of equipment. Curiosity struck, as the sleek gunmetal brushed design left me wondering what was under the hood. A simple one-fingered-flick was all that was required and I was in.

Starting the machine was the next step, I pushed down on the raised power button and RGB lighting spilt across the keyboard and towards the front and back of the laptop, a suddenly audible whip of the Republic of Gamers (ROG) logo caught me by surprise as it flashed across the screen.

The laptop which had my curiosity at first now had my attention.

Check out a full video review of the device below;

At its core, the ASUS Strix Scar II has been designed for FPS gamers, with the promise of being able to play some of the most demanding titles on ultra settings with frame rates that hold up to the test. In the attempt to deliver on their promise, ASUS has loaded up the laptop with; 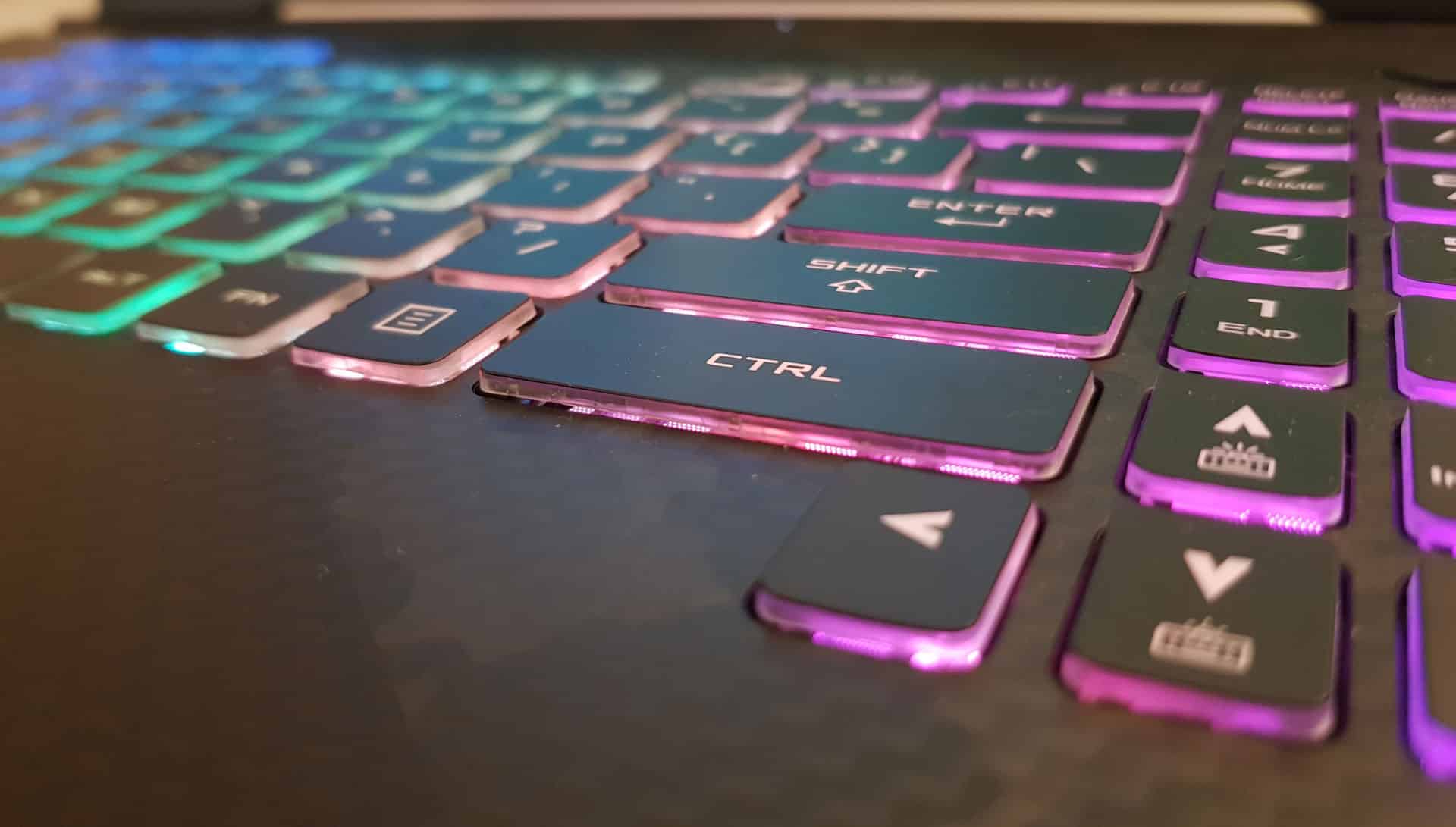 From a display point of view, you can expect a 15.6” 1080p Full HD experience with 144Hz IPS Level high refresh rate display which is nothing short of impressive. The bezel surrounding the screen is almost unnoticeable on the top and sides. When you compare it to its predecessor, the ROG Strix Scar, you can see that they have made a massive improvement here. 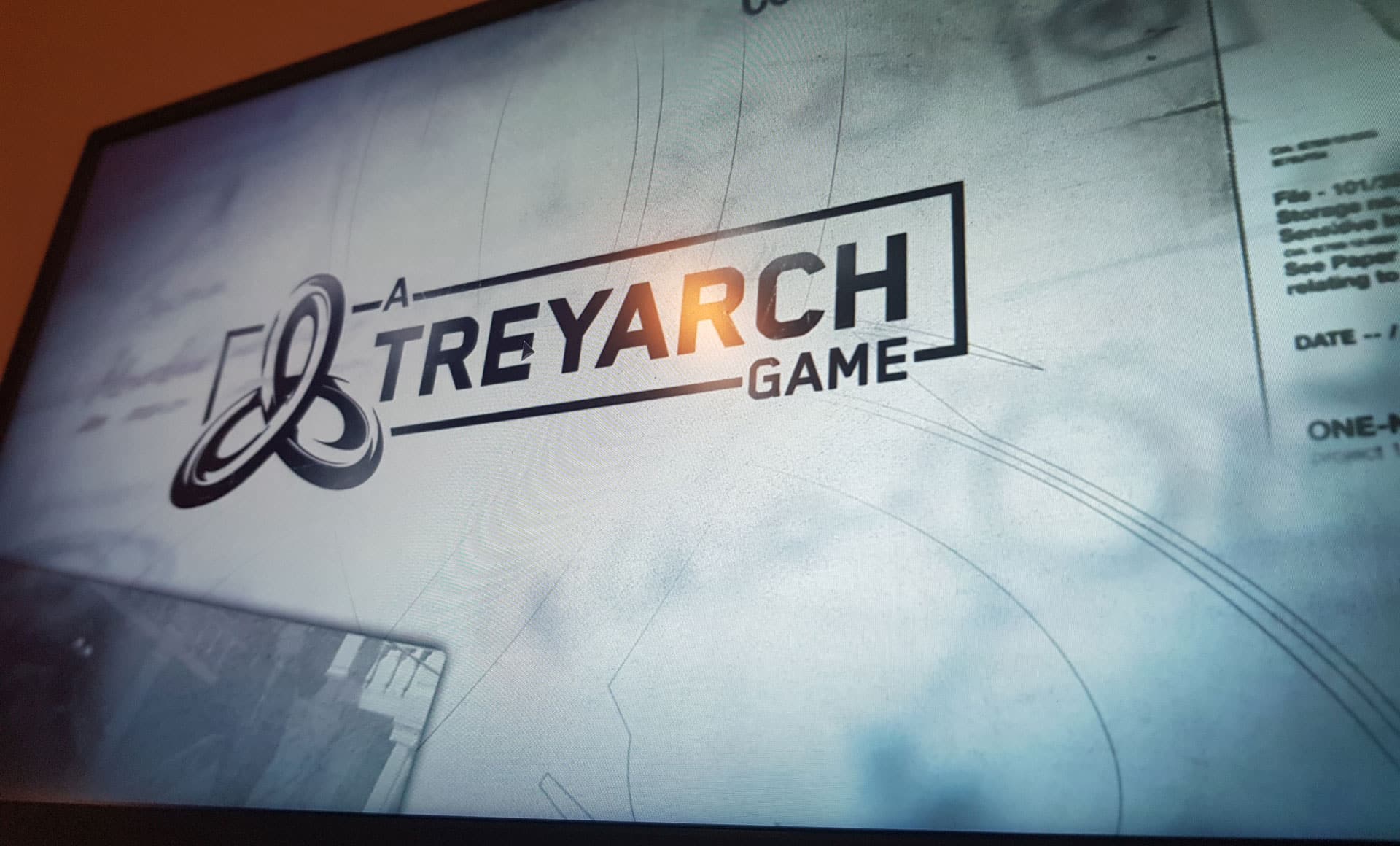 The bottom of the screen is finished off nicely with a reflective ROG logo and a 720p webcam on the lower right-hand side. When it comes to the webcam placement, I feel like it was less than ideal but by no means a deal breaker. Placement would have been perfect on the centred-top of the monitor but the tradeoff for the decreased bezel size is arguably worth it.

The viewing angles are on the screen are great as the colouring and image quality holds up at awkward angles.

The Scar II is not short on ports either to meet your gaming and streaming needs. On the left-hand side you can expect;

Moving away from internals and towards the externals, the contrasted brushed gunmetal grey hood with RGB logo in the front has been finished off nicely. One of the most unnecessary, but ultimately my favourite cosmetic addition, is the front-facing RGB light which adds a stylish finish that quite simply looks really cool. 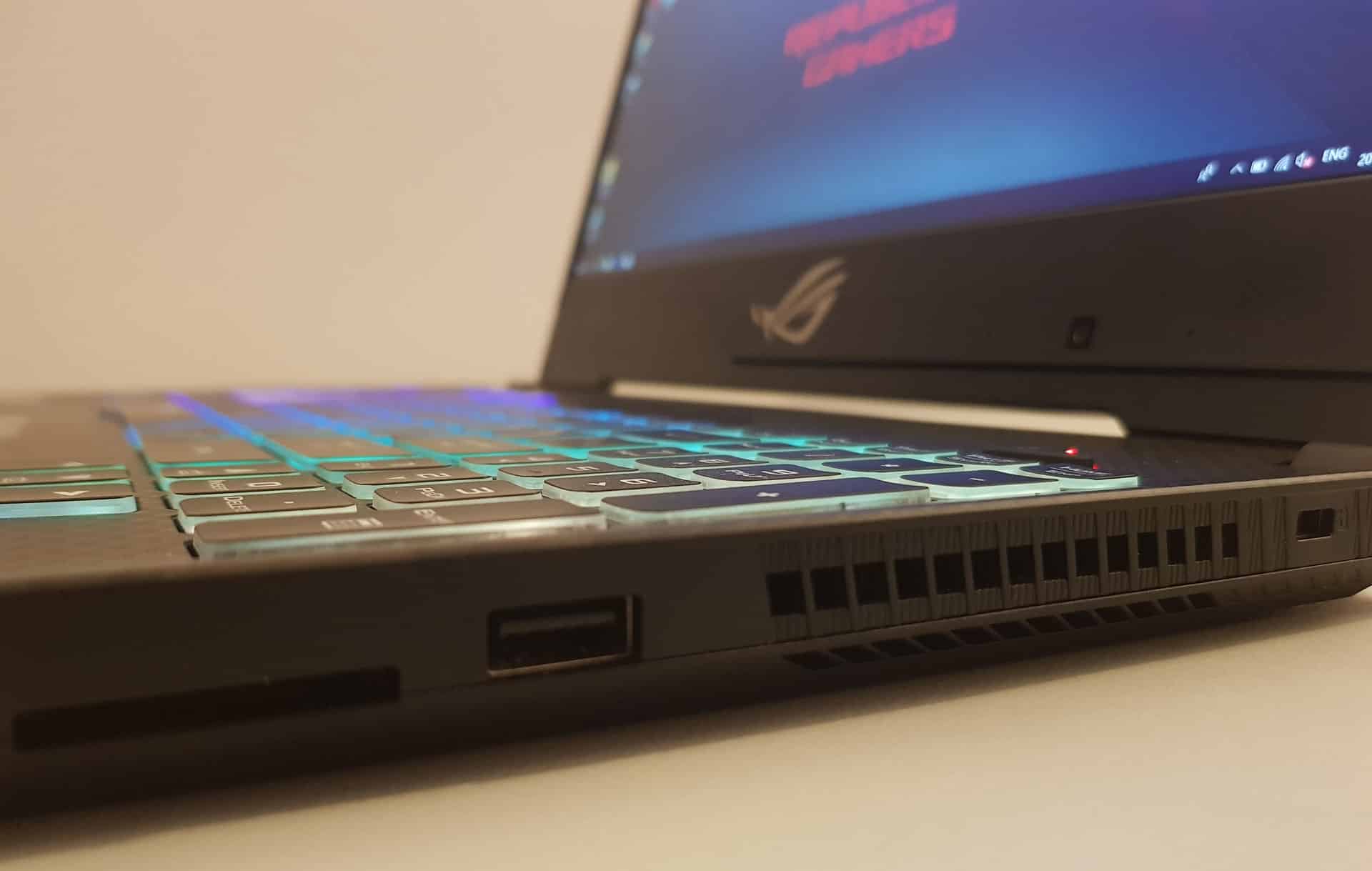 While the laptop charged in the distance I couldn’t help but get the feeling that the pulsating logo and front-facing RGB panel were calling me over to take to my next online adventure. The vivid lighting was a feature that I really never thought I would really enjoy but I’ve been happily converted away from the dark side and towards the RGB light.

At the base of the laptop, the most noticeable feature is the four-zoned backlit RGB keyboard. It must be noted that the laptop also supports lighting sync, which will allow you to add and match other ASUS peripherals to the laptop allowing you to reproduce the RGB settings. 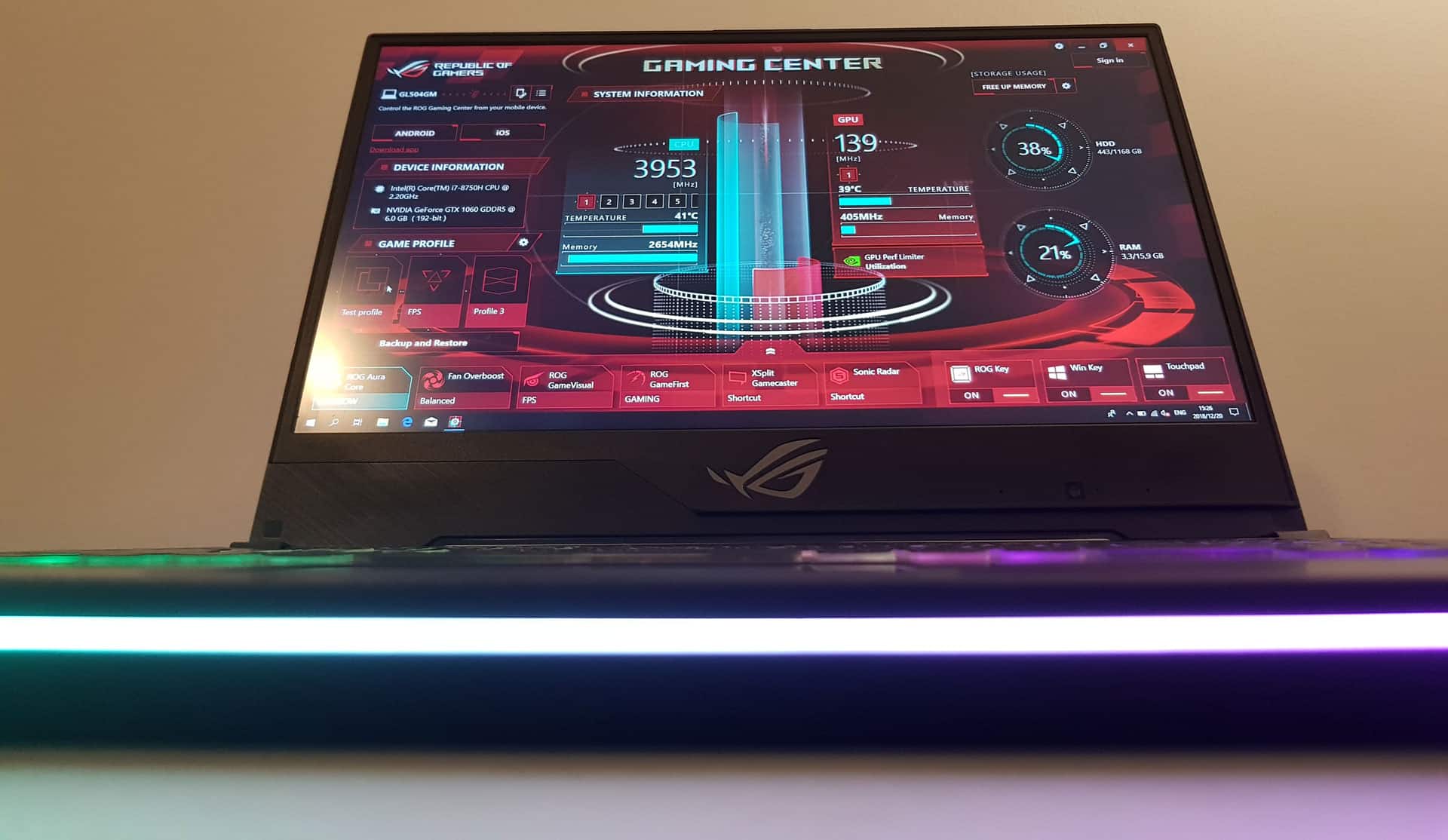 The base surface is covered with a carbon fibre styled look where half is diagonally spread with a grayscale-kevlar-inspired camouflage design. I couldn’t help but love the camo finish, as it reminded me of, and could potentially be, an unofficial homage to one of my favourite movies of all time – Hackers.

The smudge-proof surface meant that fingerprints weren’t going to be found sprawled across the surface which gave me peace of mind knowing that I could keep some of more of my OCD cleaning compulsions at bay.

The transparent WASD keys are exclusive to the Scar models which cater primarily to the FPS gamer. The buttons on the keyboard feel tactile and punchy and a 1.8mm travel translates to a usage that feels responsive and intuitive.

It is rather surprising how much they have managed to fit into the base alone. The Numpad can be found on the right-hand side, which is just above the navigational keys. Being used to more traditional keyboard designs. I found that the positioning of the Up, Down, Left and Right keys were awkward to use at first but became familiar after stumbling over a small learning curve.  Moving away from the standard, there are four quick-select keys at the top of the keyboard, namely;

Under the base of the keyboard, we have the trackpad, which comes in at a fairly large size of 12cm (diagonally) with a silky-smooth finish. The trackpad is rather functional as it is Microsoft Precision certified, which means that it responds to gestures like two-finger scrolling and three-finger tab switching. There is also more than enough room on the trackpad to promote the usage of these gestures. 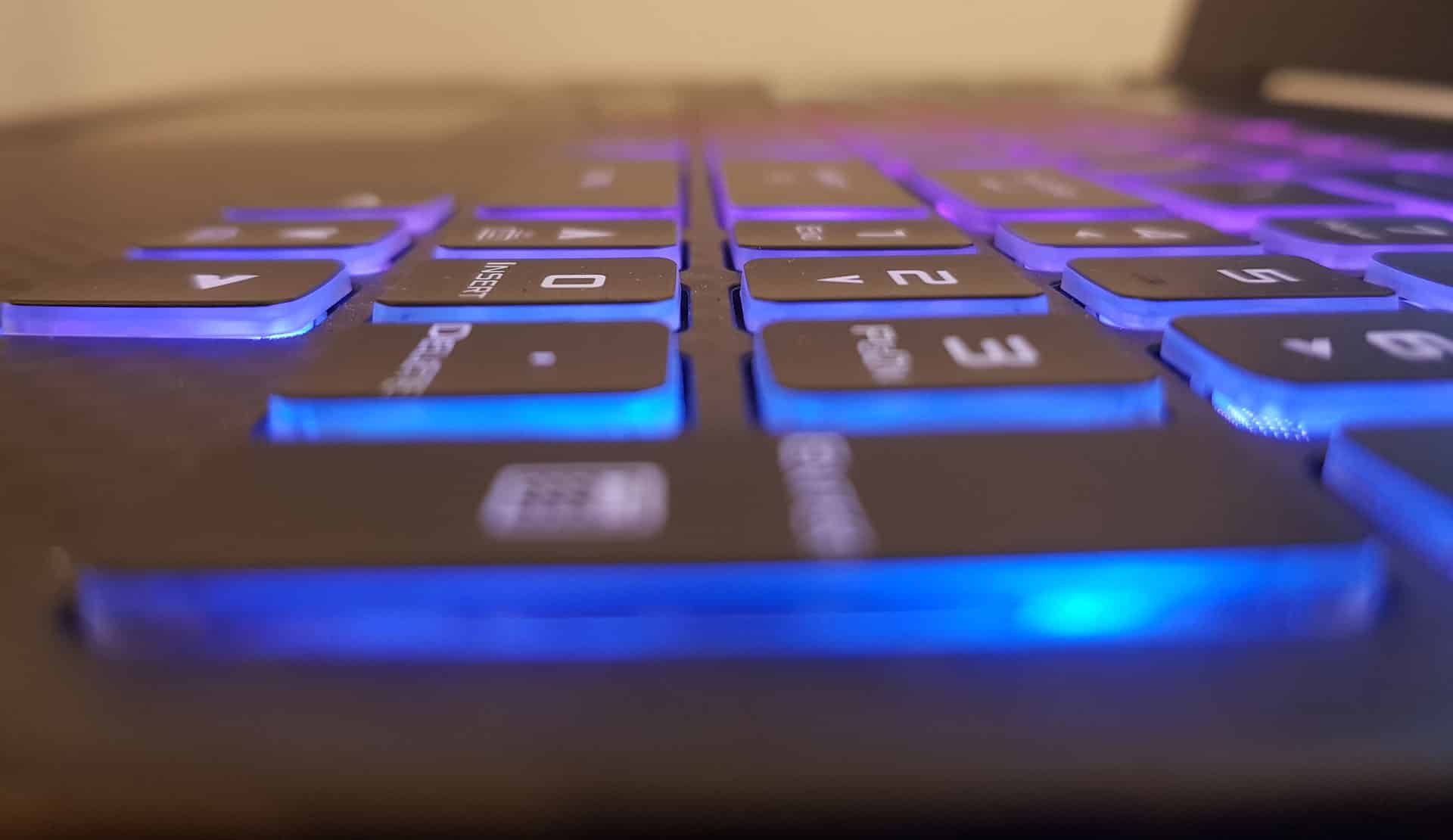 The trackpad additionally offers enough contrast of feel which makes it easy to find when you’re not paying attention. At the base of the trackpad are the two physical buttons which give clear and concise feedback when pressed.

Should users want to carry around an external mouse, there is an option to turn off the trackpad completely. They will always have a great trackpad to fall back on should their mouse fail them at any point in time.

The ROG Gaming Centre is at the core of the customization of your ASUS ROG laptop.  The visuals of the software are well put together and are largely revealing, providing all of your required system information at a glance, including the CPU, GPU, RAM and HDD usage. You can additionally be able to check up on your respective temperature and memory of both the CPU and GPU at a glance. 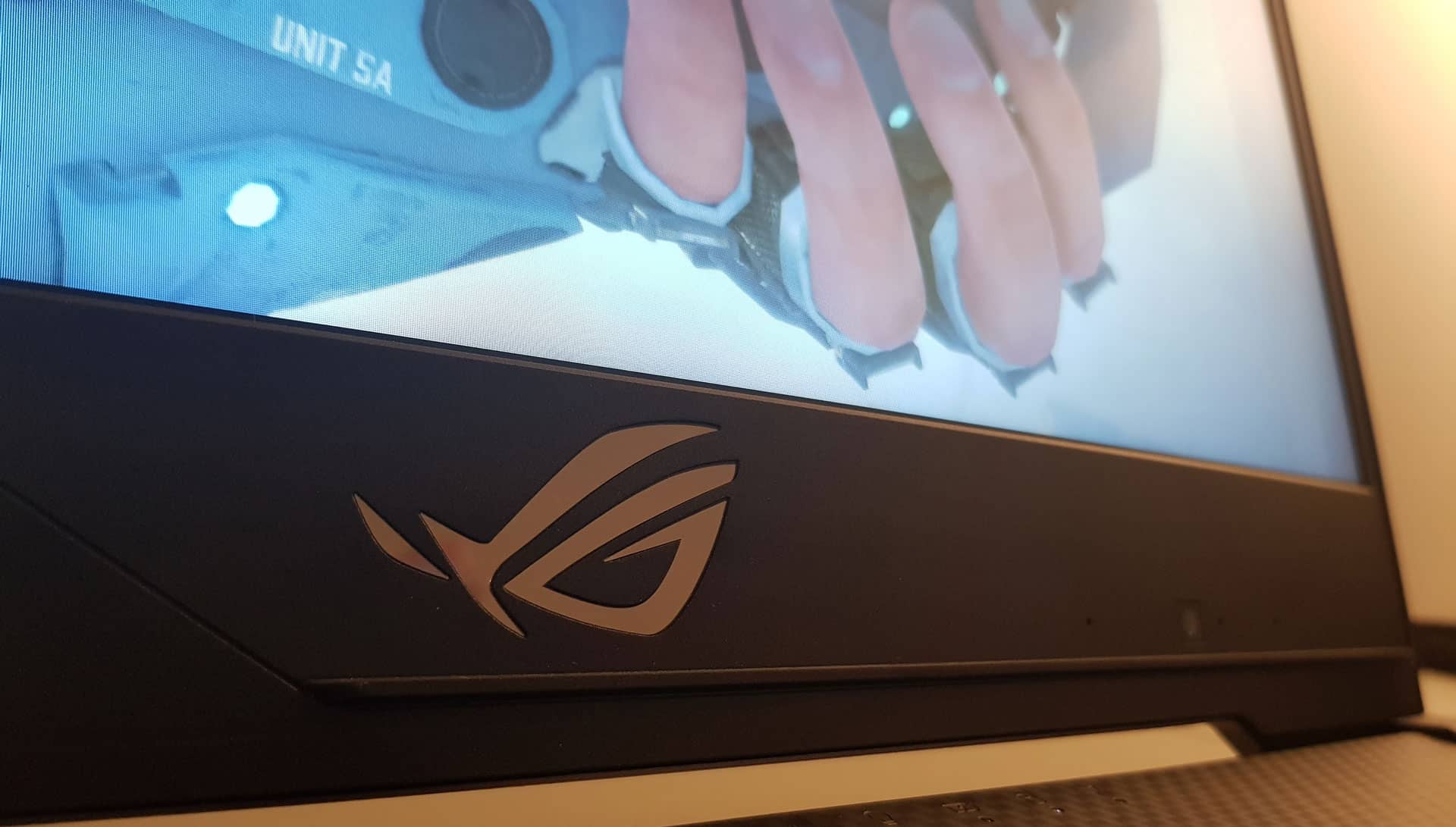 Should you be the type of gamer that uses different settings for various titles or have multiple users on the laptop, you will find the quick load ‘Game Profiles’ option a welcomed addition.

While controlling the internal visuals are fantastic via the GameVisual shortcut, the real pleasure is being able to toy with the colour schematics and see them change on the fly via the ROG Aura Core. From here you can play with your keyboard illumination and the LEDs on the front and top of the laptop. There are over seven effect presets and three tempo settings (slow, medium and fast) to choose from.

As far as sound goes, you can extensively adjust the speakers via Sonic Studio and Sonic Radar. It has to be said that I was largely surprised at how great the speakers sounded, especially for that of a gaming laptop.

The ROG Scar II graphics card, the NVIDIA GTX1060 Core i7-8750H provides a stable base to get the ball rolling with almost all games being able to run in high-ultra settings with impressive frame rates that sit comfortably around the 100 FPS mark. 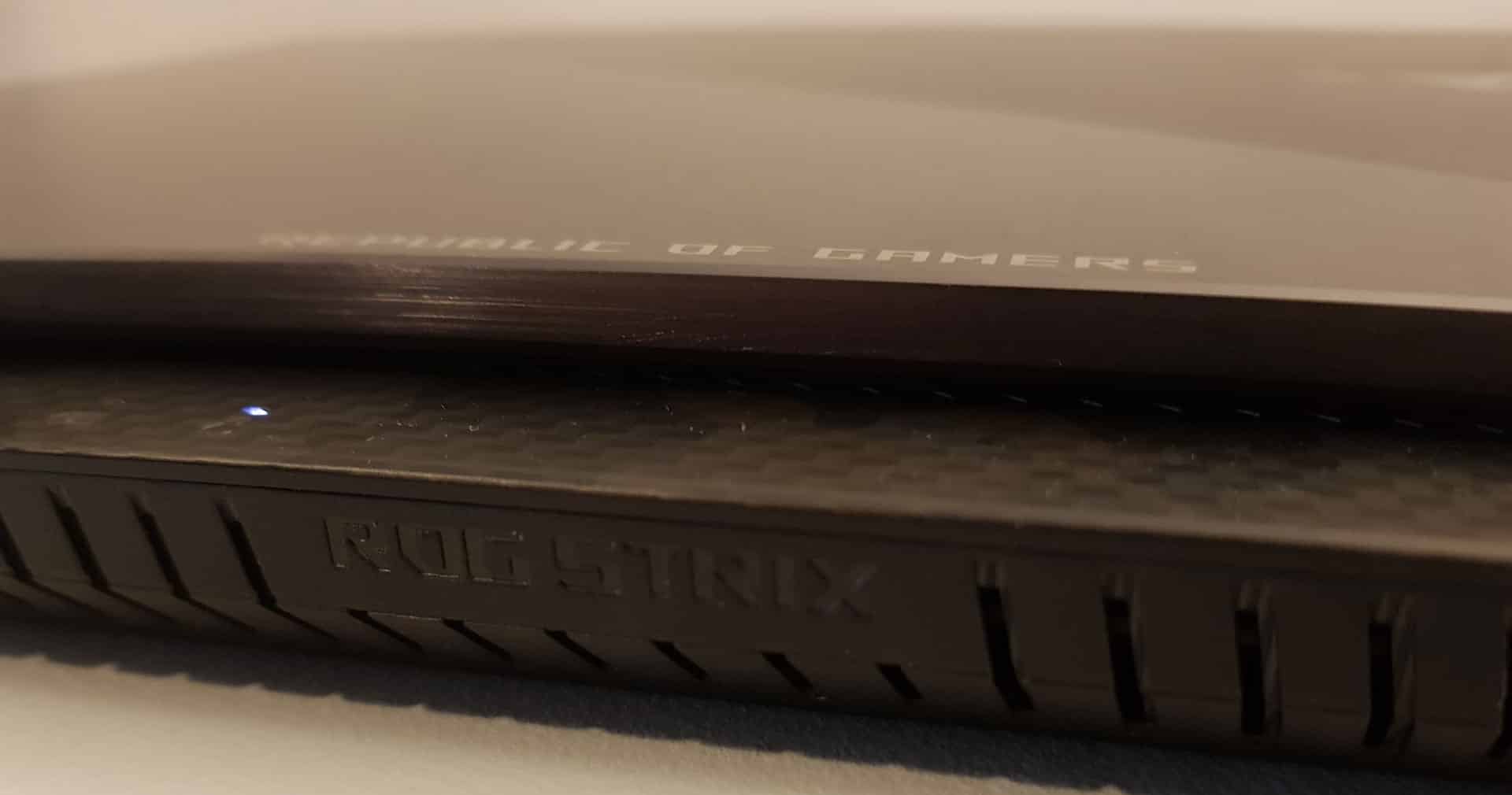 The game which received the most time on the laptop was none other than Call of Duty: Black Ops 4. While coming from a mostly console-based background (sacrilege to mention in a laptop review, I know), I was taken aback by how beautiful the game looks compared to its console brethren. Colours popped and the viewing distances were both daunting and impressive.

Should you wish to maintain a constant 144 FPS you may want to drop your settings medium/high for those that are more competitively inclined. It’s not only FPS titles that have to gain from its beefed up components, but I also found that third person titles like Fortnite and MOBAs like League of Legends were a joy to experience on the laptop.

Being productive on the ASUS Strix Scar II is an absolute breeze. The laptop offers fantastic overall performance when facing high tier tasks like rendering video, which has close to no throttling. 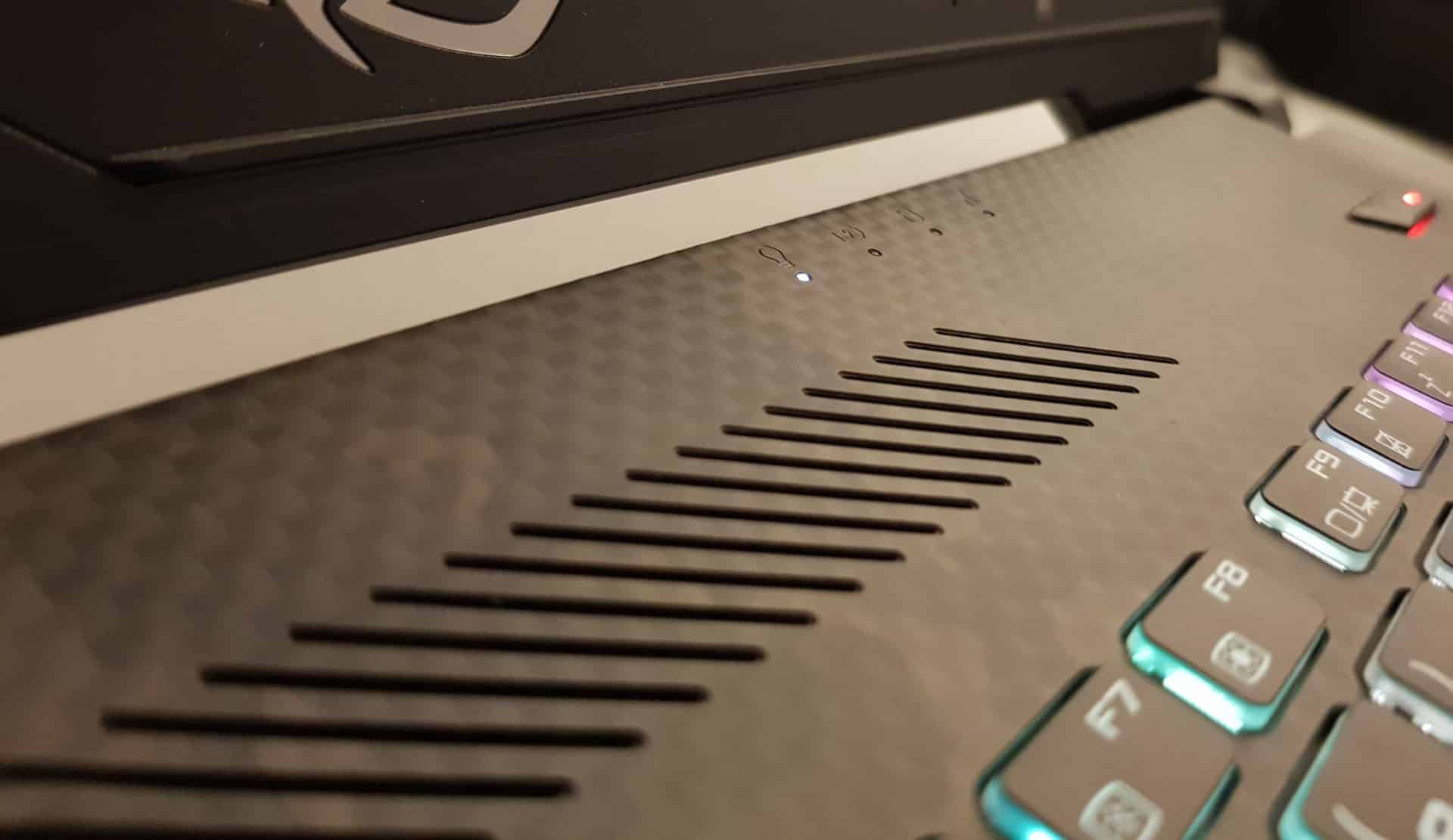 As for streaming, the laptop is an absolute machine. You won’t find yourself lagging between scene selection and the entire process just works. Even when you are a bit heavy handed with embedded video overlays and camera capture, the ASUS Strix Scar II manages to keep trucking along without any performance knocks.

Completing menial tasks are a pleasure on the laptop, even when travelling. The Wi-Fi makes use of Intel 802ac (2×2) Gigabit Wi-Fi which features a multi-antenna which allows you to get a rather impressive range. Despite taking the laptop to a couple of cafes, I surprisingly experienced no connection drops. The Wifi delivers speeds of up to 1.7 Gbps per second, which means that if you are based in South Africa you should be good for the next decade or so.

While on the go you’ll need to be sure to take your power adapter with you as battery life can be rather short, especially when you are looking to complete demanding tasks. I achieved around three hours of battery life on power saving settings where the screen brightness was adjusted, RGB lighting was turned off and basic web browsing with some video time was sprinkled in between.

The ASUS Strix Scar II and its variances are priced between R30 000 to R43 000 depending on what screen size, RAM and SSD option you decide to go with. Certain retailers, such as Evetech additionally offer a free ASUS accessory pack (Headset, Mouse and backpack) upon purchase. 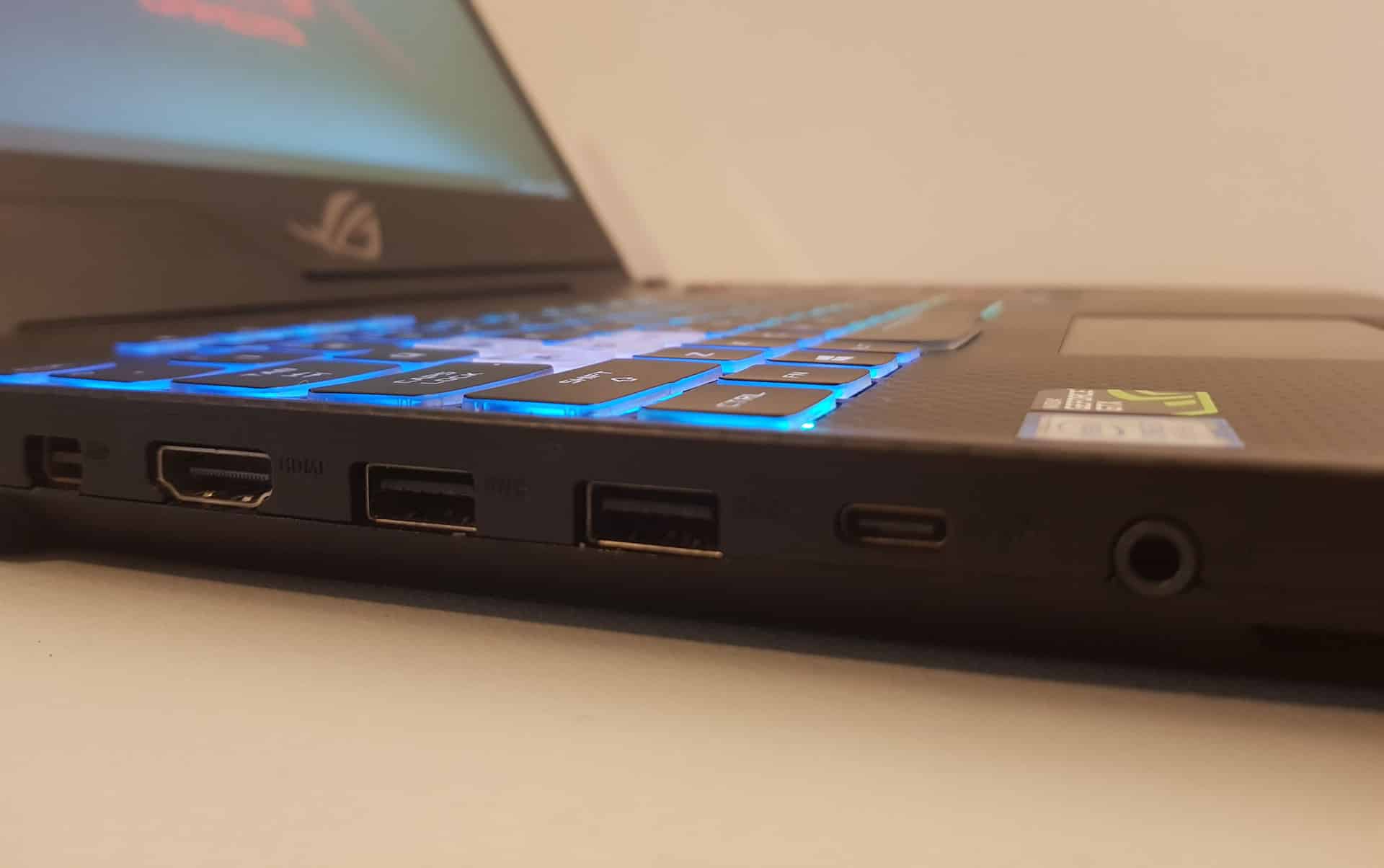 It also wouldn’t be right if I didn’t inform you about the promotion ASUS is running at the moment which will allow anyone that purchases a laptop at a qualifying retailer to redeem a Call of Duty: Black Ops 4 Digital copy before the 10th of January.

The ASUS ROG Strix Scar II has been an absolute pleasure to game, work and stream with over the past two weeks. The Core i7 processor and GTX 1060 GPU delivers a bang of power which spreads across into every task that you push the laptop to undertake.

The monitor is not to be scoffed at either as the quickfire response rate delivered to you on the 144hz 15.6” monitor is nothing short of impressive.

The colours pop, the frame rates hold up and the smile will slowly stretch across your face as you come to grips with this fine specimen of machinery. The keyboard, in addition to being backlit, is no gimmick. It is simply the best keyboard I have ever used on a laptop and is a pleasure to both type and game with.

I’ve always found that looks can be deceiving but the ASUS Strix Scar II was not only good looking but had the performance to back up its sleek design. The RGB customization and lighting allows you to add your own flavour which brings a personal touch to the machine which I absolutely loved.