2020 has marked a big year in tech. Not only did it welcome next-gen consoles (which are now current-gen) to the market but WiFi 6 is now more relevant than ever thanks to this new hardware. Of course, the Xbox Series X does not have WiFi 6 so I am talking more about PC hardware and the PS5 of which both have the capabilities of supporting the tech. So what is WiFi 6? In short, it is the next-generation of wireless frequencies.

Those of you who don’t care about the technical mumbo jumbo, it is still the WiFi you know and love and revolves around connecting you to the internet. However, now does it more efficiently, faster and includes improves security. WiFi 5 was only capable of 3.5Gbps. WiFi 6 has tripled that spec and is capable of outputting 9.6 Gbps. Not only does that mean faster network speeds but it means the bandwidth across multiple devices connected to the modem at once, has increased. 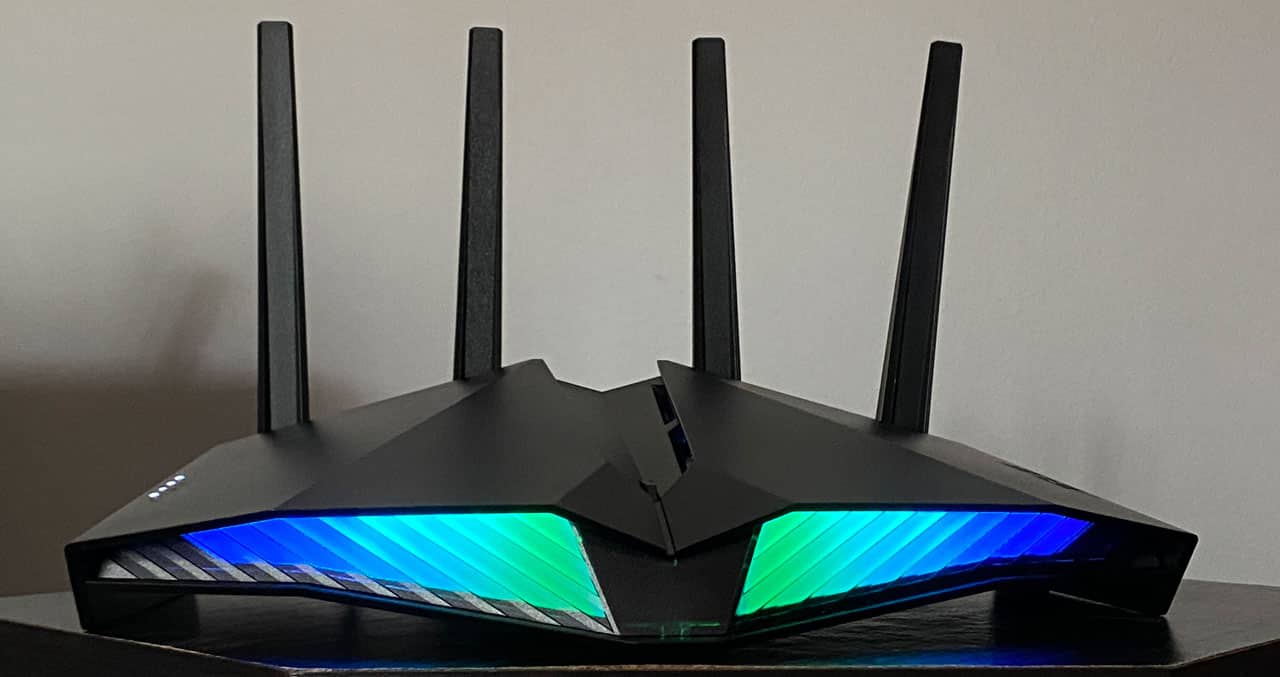 This is great news for all households who prefer to live the wireless life. Your family can binge Netflix while your PC downloads Steam updates and you play Destiny 2 on PS5. It means less congestion and happier people. In particular, it is better news for gamers because it means WiFi 6 can now provide less latency so you can toss that LAN cable away. It also means faster game downloads and a WiFi that is more stable than ever before.

ASUS is one of the first gaming brands to release a WiFi 6 modem onto the market and it is pretty damn fantastic. Not only is it one of the most stylish routers I have ever used (close to the classy Blue Cave one) but the performance is levels beyond my basic D-Link hardware. The ASUS RT-AX82U AX5400 (yes, that is the name I know) is a great option for future-proofing your household and provides some great benefits for gamers too. 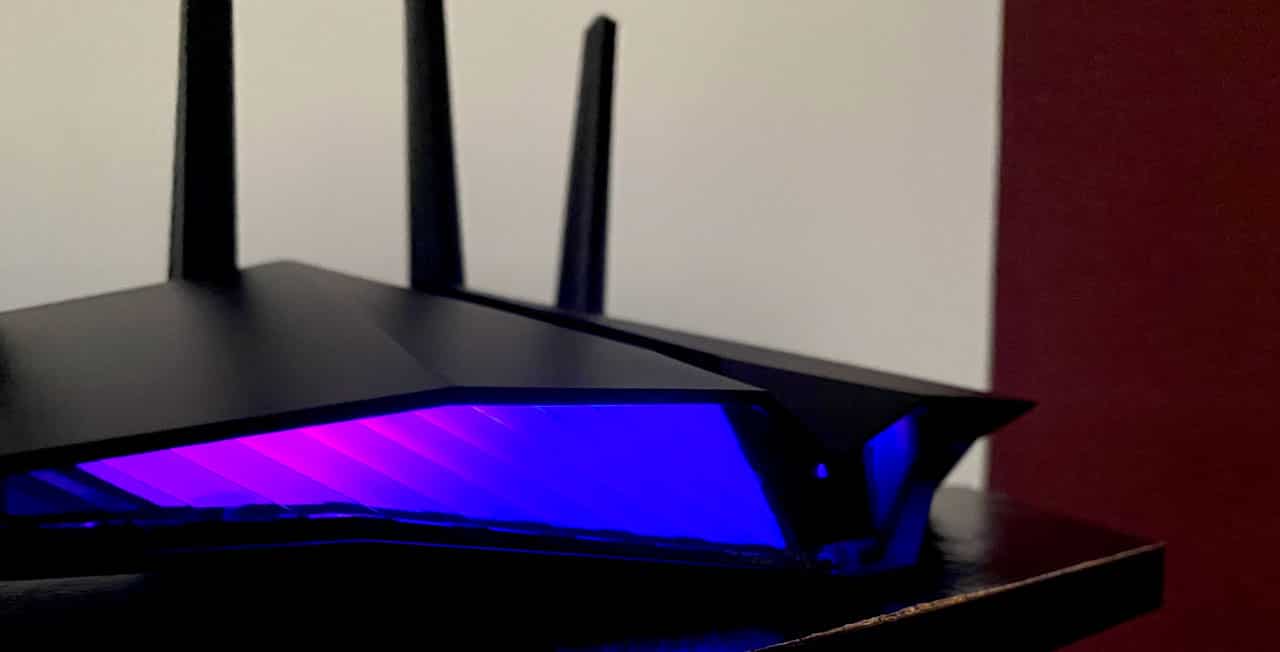 This router is not joking around when it comes to its design. It is as if a starfighter from Star Wars came and landed on my counter the moment I turned it on. On the front of the device, there’s a grill that glows with a range of RGB settings you can select. This grill looks like a vent at the back of a space ship and is narrowed inwards thanks to the roof of the device which slopes downwards. At the back, there are four antennas and the ports. This is all divided by two air vents which shoot up the middle of the device. If you look into these you can actually see the innards of the modem itself. 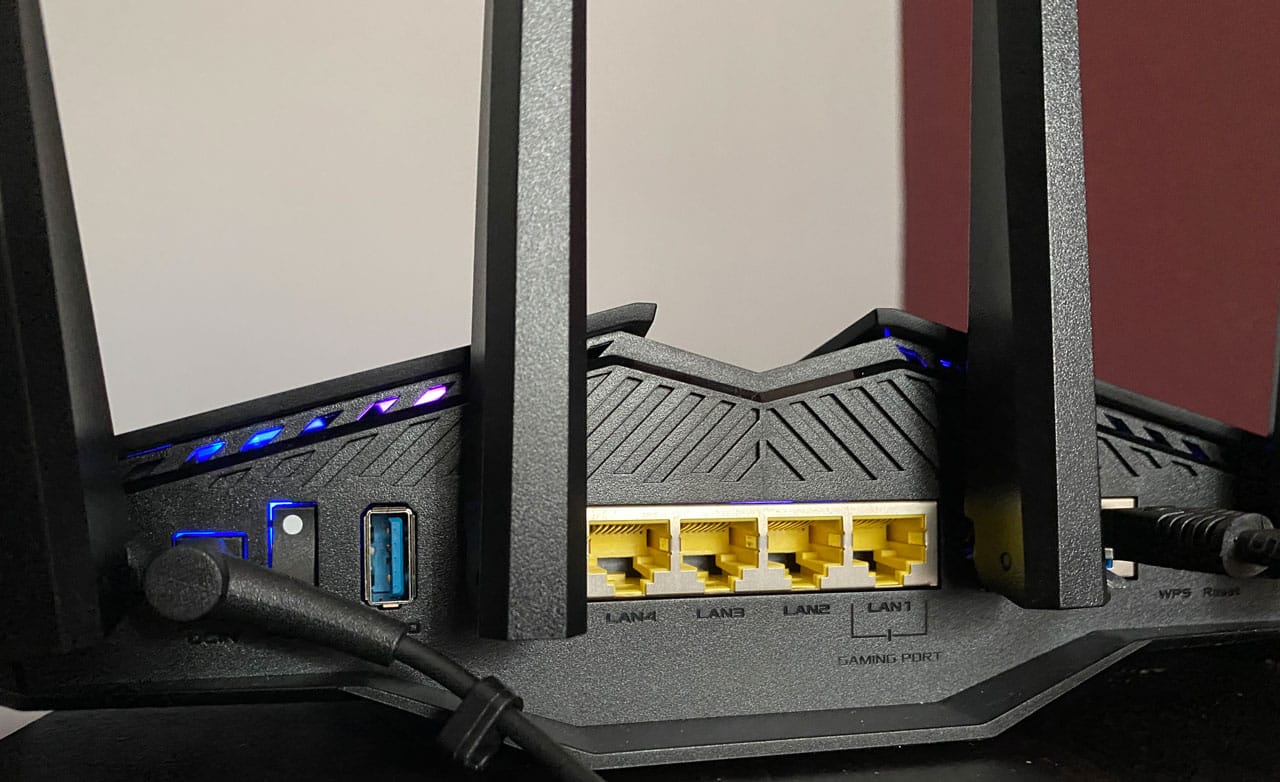 If you have used a router in the past few years, the ports at the back won’t surprise you. There’s the power port next to a switch, a USB, in the middle there are four LAN ports and on the right, there’s the WAN port. There’s also the reset and WPS button The last thing to note is on the top, you will find the other important lights including the internet and WiFi lights.

Setting up a router these days is so much easier than it used to be. This is thanks to the various wizards that help the process. The ASUS RT-AX82U AX5400 was quick to put together. The router comes assembled in the box and all I had to do was plug it in, connect a LAN cable to my laptop and the internet cable from my fibre box and it was ready to go. The modem redirected me to a landing page, I entered my PPoE details in and it connected to the internet. 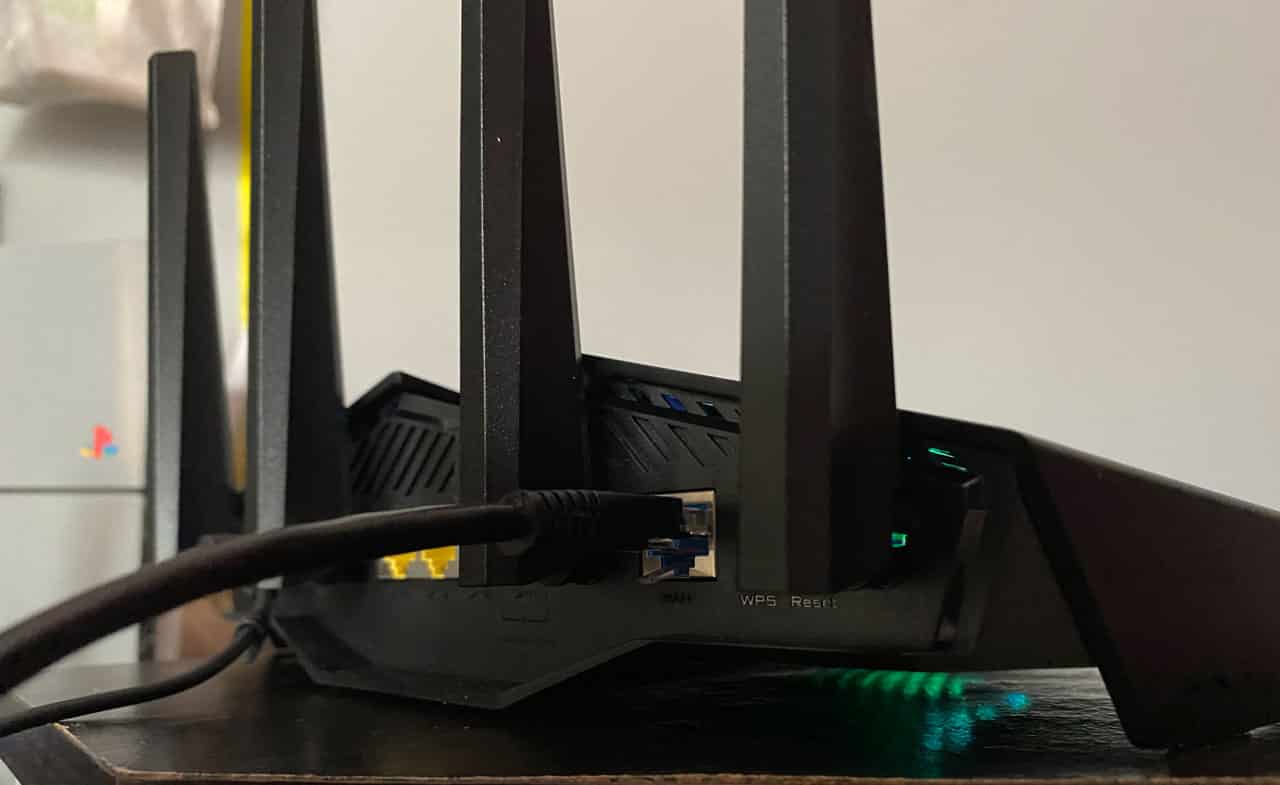 It then gave me the option to enter my WiFi details. The modem does provide a combined “Smart Connect” channel mode where instead of a 2.5GHz and 5GHz frequency, the modem automatically assigns the device either-or, without transmitting both. This especially helps when you have a load of WiFi signals in your household as I do.

The UI and settings page is easy to understand and get around. Anyone who enjoys fiddling inside their modem will be happy here. There’s also some gaming-only features including a Gear Accelerator page where you can prioritize gaming devices connected to the device. You can also forwards here in case your ISP blocks them for specific games. Those of you who have NAT issues can also manually select specific NAT modes and even assign specific rules to specific games. 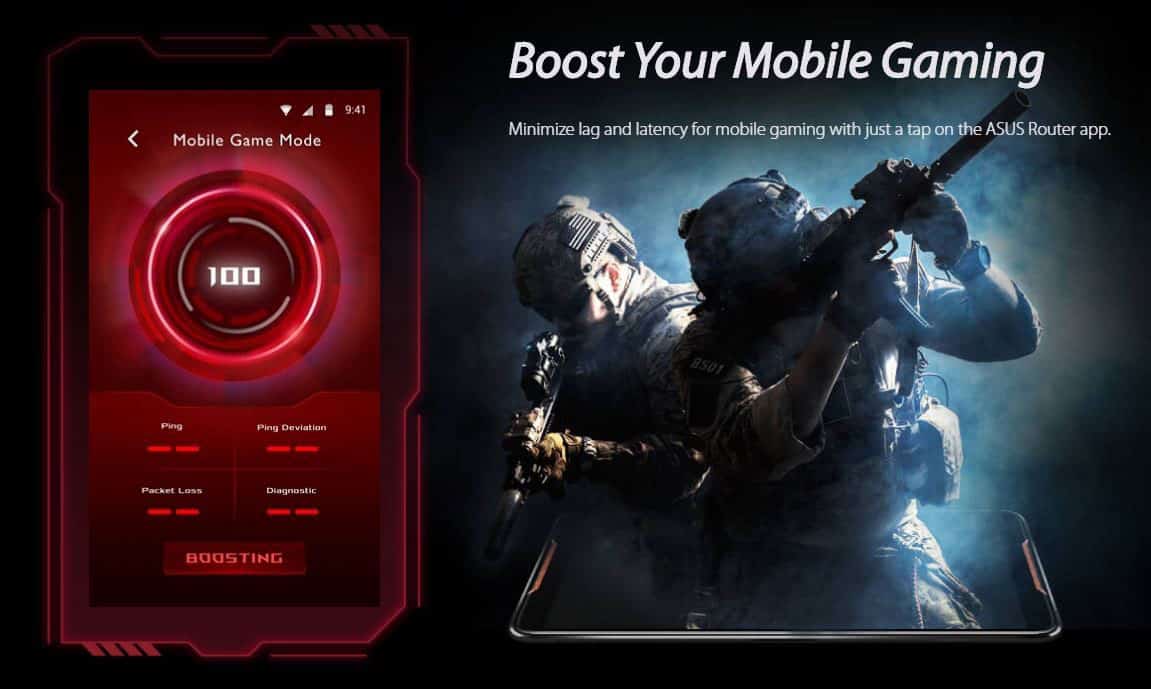 I’m not going to go into detail about every single menu and option the dashboard offers. However, I will say that the ASUS RT-AX82U AX5400 is quite a feature-packed device with loads of settings to tinker with. It also helps that the mobile app includes easy access to a handful of settings which saves you from having to log into the modem every time you want to change something. With that being said, the app is also limited to certain tweaks. You can’t edit the connection type, VPN and other technical options on the app.

The app is also used to change the RGB style of the device. This alters the front grill where the LED lights are found. This is an ASUS router which means it comes with Aura RGB. I could select a range of colours as well as combine that with a handful of lighting styles. Breathing, Rainbow, Gradient etc. To be completely honest, I disabled this feature the moment I downloaded the app. While I do think there are people out there that will use the lights, I have the modem in a study where no one sees it. Pointless to have the lights flashing the whole day. Is your modem something that you see all day? Then you will love this… I just found it a waste of electricity.

I have a few routers in the house and my most-used one is the D-Link DIR-825ACG1. Everyone and everything connects to this in the main house so it is quite a congested router. I then took the ASUS RT-AX82U AX5400 and replaced it and notices and immediate relief on the network. I did a handful of tests using the ASUS RT-AX82U AX5400 both on wired and LAN. Keep in mind that this test was done on a 1 Gigabit download / 500 Mbps upload internet connection. My Gigabyte Aero XA notebook supports WiFi 6 and was in the room next to the device divided by a wall.

I wanted to make these tests as realistic as possible so users who don’t have their router in the same room can relate to the speeds.

As for the signal strength of the ASUS RT-AX82U AX5400, it was also quite impressive. One of our PS5 consoles is placed on the far end of the household. Two walls divide the console. This PS5 console ranged between 69% – 75% when connected. The PS5 console which is in the gaming room divided by one wall was at 100% all the time. Mobile devices too also held up quite well with signal strength. I had to really go out of my way to see a bar drop on my iPhone.

My laptop, on the other hand, which is divided by two walls saw a drop quite often but it could be the chip inside the device.  I won’t say the signal strength is the best I have ever seen but any medium household should get away with it covering most of the space.  Anyone with a fibre line of under 500Mbps and below will cap this router out on its 5GHz bands. This means you will get the best speeds your internet can provide. 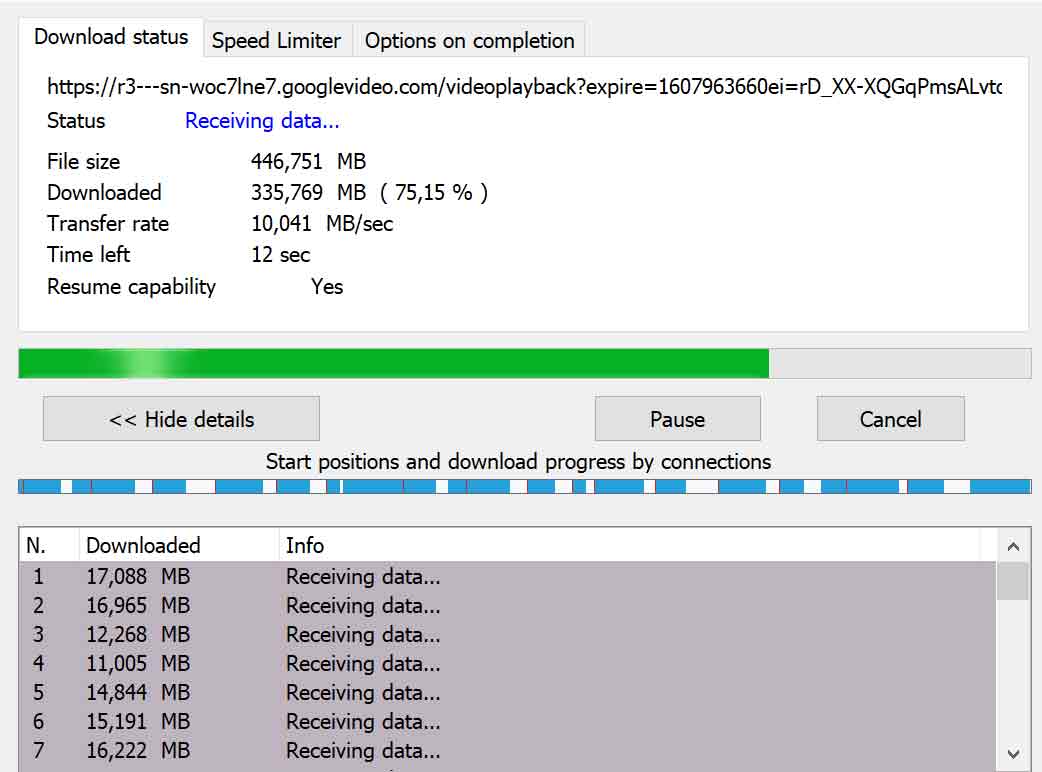 Some real-world test to show how my 200/200 internet line at home ran using the modem was great. IDM was fast when downloading videos with max connections. As for my PS5, it also performed quite well. My downloads capped at 20MB/s and it was a lot more stable than my D-Link. I would often have to pause and resume my PS5 downloads when the speed dropped but the ASUS RT-AX82U AX5400 seemed to mostly eliminate this issue. This is most likely thanks to the router’s increased bandwidth which allows more users to connect to the device so less congestion.

The ASUS RT-AX82U AX5400 WiFi 6 gaming router is a fantastic option if you are looking to future-proof your household with WiFi that is reliable and can get the most out of a super-fast fibre line. Of course, any other WiFi 5 router can max out most available fibre packages now. However, the router offers other advantages which make this stand out among the rest. This includes lower latency over WiFi, increase bandwidth and a less congested network and the WiFi speeds will help those who rely on local data transfers over a network.

The ASUS RT-AX82U is available in SA starting at R5.799 (this price has since been changed to reflect the correct local MSRP)