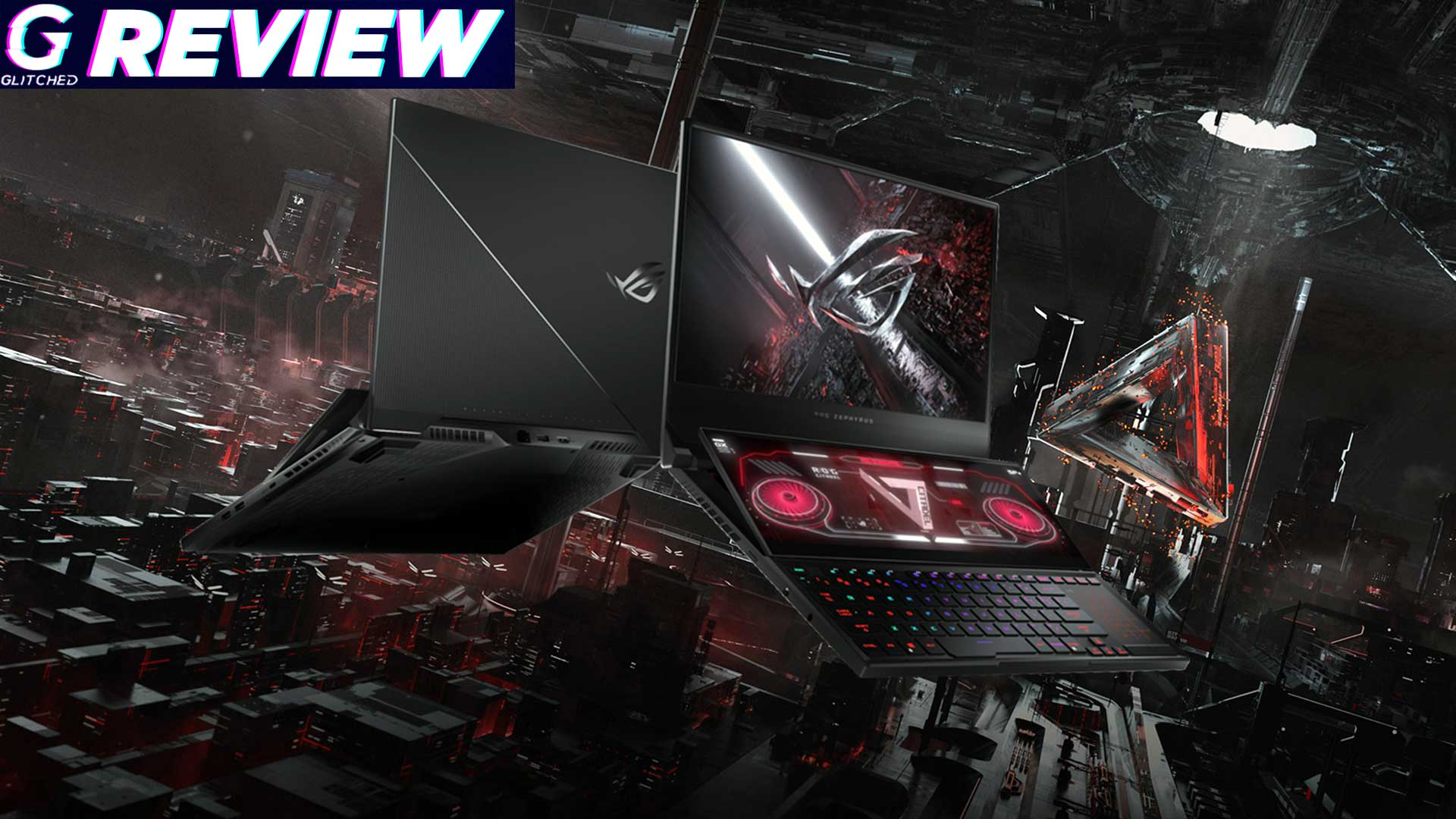 The ASUS Zephyrus Duo is both the strangest and the most awesome gaming notebook I have reviewed in a while. It can often be clumsy to work with due to the second display, especially when Windows decides to move stuff around and open windows where you don’t want them to be. However, under the hood, the notebook is pretty fantastic. I not only got to put the display to the test but I maxed the machine out during a special It Takes Two demo session where I ran the game at 4K 60FPS to an external TV.

Here’s a preview of It Takes Two. All the gameplay was recorded on the ASUS GX551

Is the ASUS Zephyrus Duo something I would buy? Not in this lifetime but its tech is pretty impressive. It takes a while to master the extra display and know how it acts and works alongside Windows 10 but the device is definitely something out of the future and for that, I can give it praise. With that being said, the GPU is also not up to scratch when compared to a desktop RTX 3080 but it is still pretty impressive. 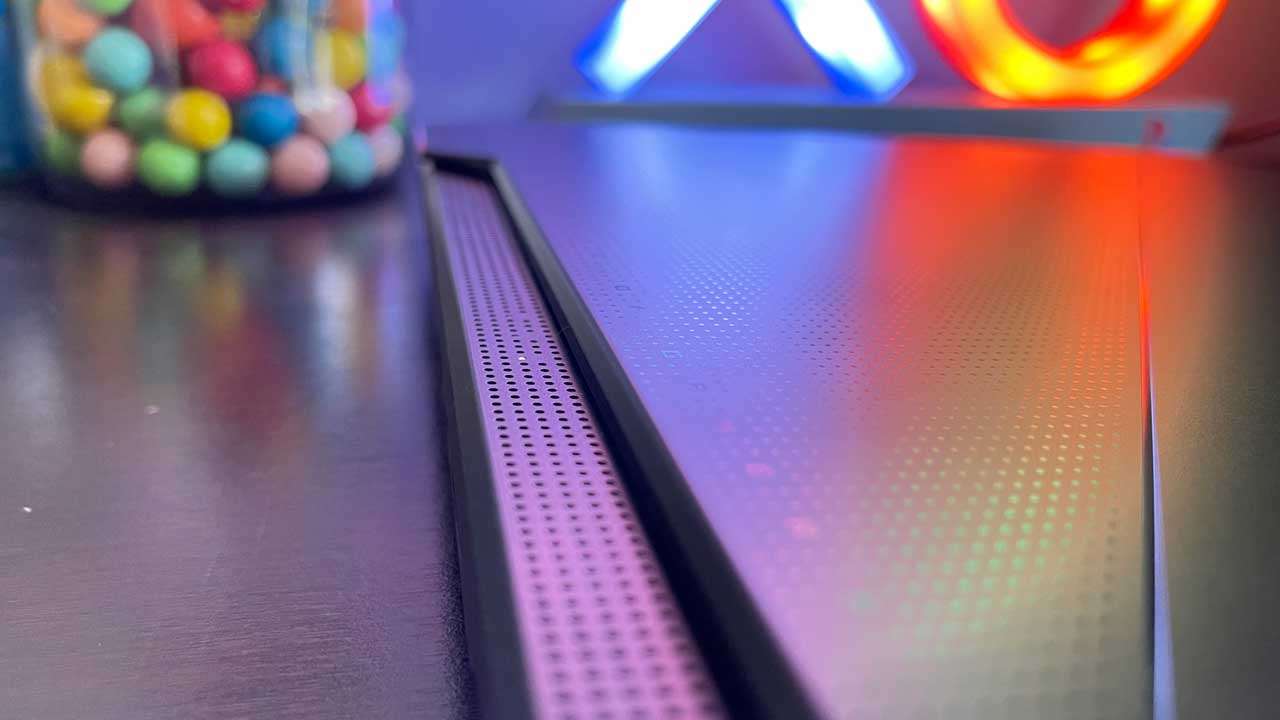 The ASUS Zephyrus Duo GX551 is impressive when it comes to the overall design of the notebook. Of course, its killer feature here is the second display that is incorporated within the notebook and elegantly lifts up and down as you open and close the device. 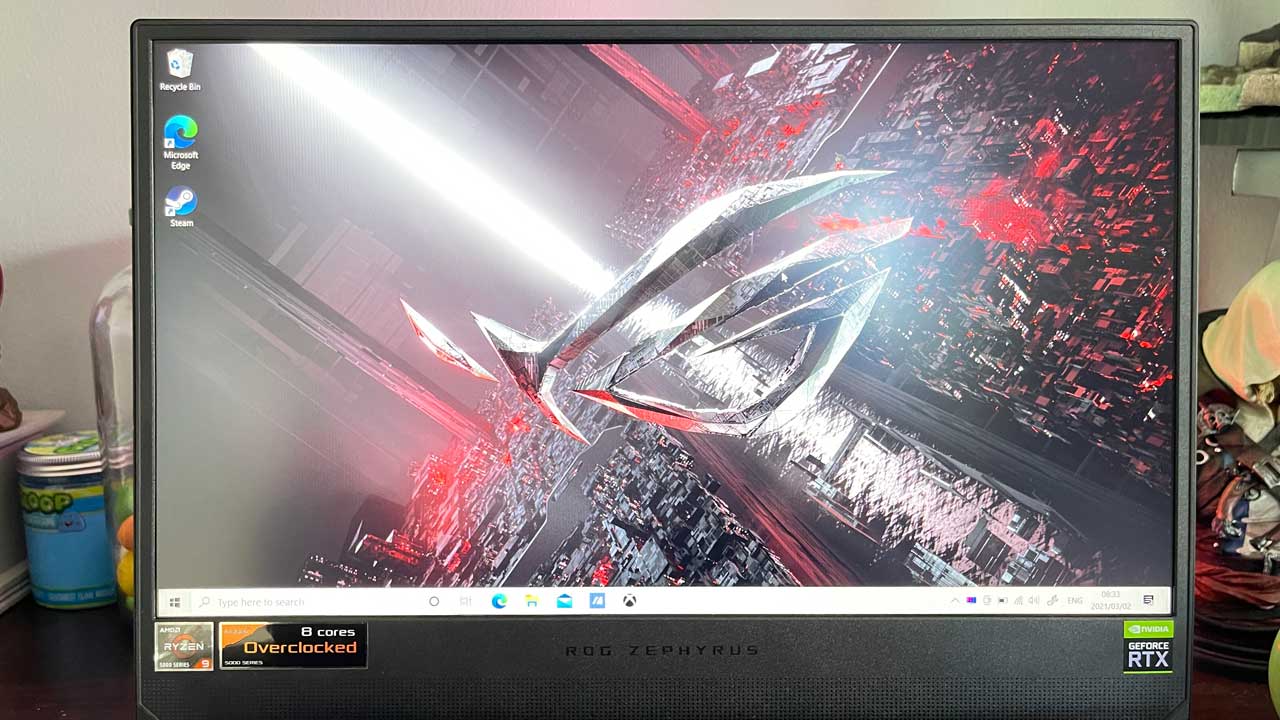 From the outside, the ASUS Zephyrus Duo GX551 looks like any other slim and sleek notebook. Even more so thanks to its impressively-slim design and all-black colour palette. There’s a shiny ASUS ROG logo on the lif and a two-tone styled material on the outer shell. On the back, you’ll find a set of ports including Ethernet, HDMI 2.1 and DisplayPort. On the left there’s the power dingle, headphone jack. On the right, a MicroSD card slot and two USB Type-A ports and a USB C port.

Opening up the ASUS Zephyrus Duo GX551 you are greeted to a very different kind of gaming notebook. Due to the extra display, the keyboard has been pushed right down to the bottom of the device and the trackpad to the right-hand side. Anyone who uses it will struggle to master this different placement and if anything, it is quite uncomfortable. The bottom keyboard means there’s no palm rest for when you’re gaming or typing so prolonged use can get a bit uncomfortable. This being without using the included wrist rest which I did not get with my review device for some reason. I would take it that this rest would have to be placed at the bottom of the notebook which means the device would have to be moved further up on my desk. So many compromises in place here just for this extra display.

As for the trackpad, it too is just tough to use. It is very limited in space and will take some getting used to. The keyboard, in general, is just pretty lacklustre. Keys only have a 1.4mm travel so they feel soft and don’t provide the click feedback you would expect from a gaming keyboard. This is especially felt while playing games. For the most part, the ASUS Zephyrus Duo GX551 keyboard and trackpad placement work but many may find it to be cumbersome. As I said before, it requires that you completely change the way you type and game and not everyone will find new ways to approach it.

I was happy with the overall port placements on the ASUS Zephyrus Duo GX551. It means that the right-hand side of the device was clean most of the time and cable management was never a problem. The tiny trackpad also means you’ll probably connect a mouse to this device the moment you get it so no power cable jutting out the side is a plus.

It is important to note that the ASUS Zephyrus Duo GX551 does not include any sort of biometrics system or a webcam. So you won’t be joining those Zoom meetings without having to purchase a separate device.

As for the second display, it is quite awesome to use and have around while the notebook is open. It moves up and down automatically when you open and close the device and the angle provides just the right amount of viewing to see what is going on. The hinge system looks cool and underneath it all there’s the cooling system. This extra panel allows for air to flow throughout the device and keep the GPU and internals cool during heavy use. The display is of decent quality and while I disliked the matte material on the panel, it can get quite bright and the overall usability is easy to get used to.

On to the performance aspect of the ASUS Zephyrus Duo GX551. It won’t be fair to just jump right into the benchmarks so we need to first talk about the ScreenPad Plus. The ASUS Zephyrus Duo GX551 would be just another boring gaming notebook without it. This panel is a complete touch-screen user interface that comes with a handful of cool ASUS ROG themes and skins. However, beyond that, the screen also doubles up as a completely separate display where you can drag and drop tabs and windows into it. Sort of like an external monitor. But internal… you know?

ASUS includes some great customization options on the display. You can also tweak it to your liking by increasing the brightness, launching apps and even tweaking the internals of the notebook such as the fan lighting and other hardware tweaks. It is like having your own personal mission command deck at your fingertips and it is pretty cool. Is the ScreenPad Plus a game-changer? Not really. I guess gamers and PC users, in general, already know their way around a PC and can live without having it around. However, it is cool nonetheless. I found it useful a few times. For example, while playing through the It Takes Two preview, we used Discord to chat with the developers. I was able to leave the app open on the display so I could keep up to date with what was happening without having to minimize the game.

Performance in gaming is superb on the ASUS Zephyrus Duo GX551. I ran the usual tests across games like Far Cry 5, Rise of the Tomb Raider and more. Here’s what I got: As you can see above, the ASUS Zephyrus Duo GX551 is a pretty capable machine. Of course, if you opt for the 4K model (which I am happy that you can afford it) then you will most likely be able to reach 60FPS on most games at maxed-out settings. The FHD model does a great job pushing these games to the max and while I never got around to using the 300Hz display, the visuals and performance were top-notch. I can definitely see gamers who love multiplayer games maxing this out on games like DOTA, Overwatch and CS: GO.

Cooling in the ASUS Zephyrus Duo GX551 is decent too. During testing, the CPU reached a max of 93-degrees C which then only slightly dropped the average core frequency by o.20GHz. So technically what was a 3.93GHz frequency went down to 3.75GHz. Hardly any massive change given the jump from 80-degrees C. It took me 20 minutes of gaming to reach this temperature and once hit, I saw no drop in performance. The GPU tells the same story here as it maintained 70-75-degrees C without a massive drop in frequency. After 20 minutes of gaming, it went from 1689MHz to 1675MHz. 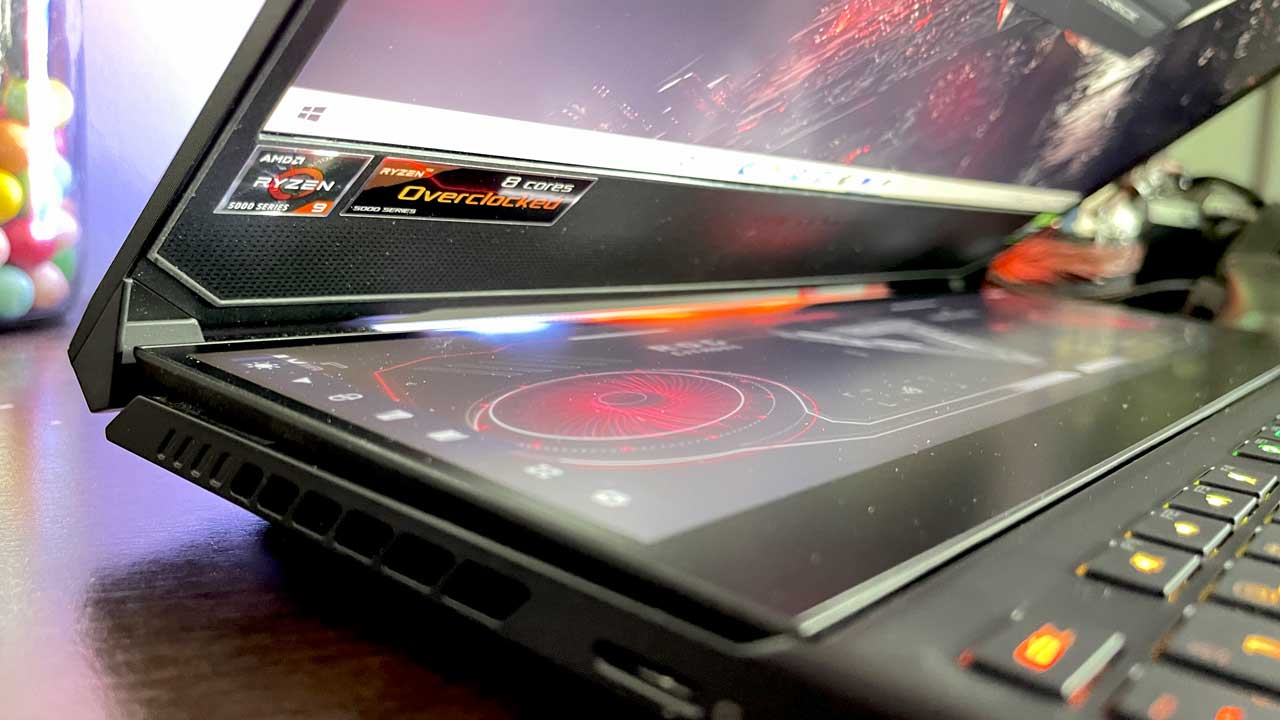 It goes without saying here that the ASUS Zephyrus Duo GX551 performs pretty well considering the RTX 3080 is not technically the same one you can find on a desktop. Still, it packs quite a punch and along with the AMD Ryzen CPU and fantastic cooling system, the whole package is every gamer’s dream.

The battery life in the ASUS Zephyrus Duo GX551 is great. It lasted me a whole day, around 8 and a half hours on one charge. This was mainly web browsing and the odd video. You can easily get more life out of this by optimizing your “non-gaming” approach. Of course, turning off the second display also goes a long way to conserve more battery power. 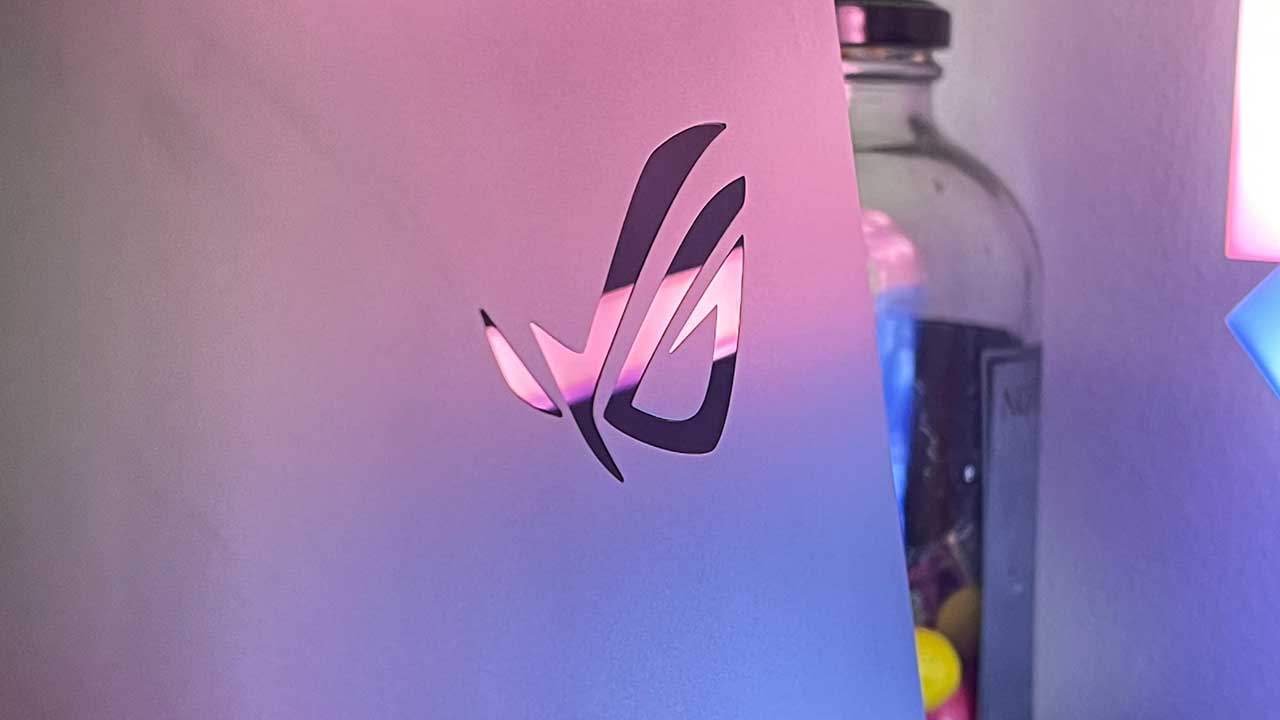 The ASUS Zephyrus Duo GX551 is a fantastic notebook that packs some incredible power. It also has what most notebooks lack these days – innovation. The USB Type-C charging while on the go makes it a great notebook for productivity and the GPU and CPU power doubles it up as a great gaming device. The ScreenPad I can live without. It makes this device so crazy expensive that it won’t pay for itself in the long run. It is nice to have but if you can cut R20k off this R69,999 notebook, perhaps then we can talk.

Those looking for the best of the best, this is it. You will be able to enjoy every game at the best quality possible and benefit from some cool tweaks and app that the secondary display brings with it. R69,999 is just a lot of money to ask to get this all.

This ASUS Zephyrus Duo GX551 was based on a review device sent to us by ASUS.

PrevPreviousThe Microsoft $7.5 Billion Bethesda Acquisition Has Been Approved
NextWatch Dogs Legion Online Launches Today But Will Be Limited Across PlatformsNext