Battlefield V: Every Edition and How You Can Play Early and Get Extra Content 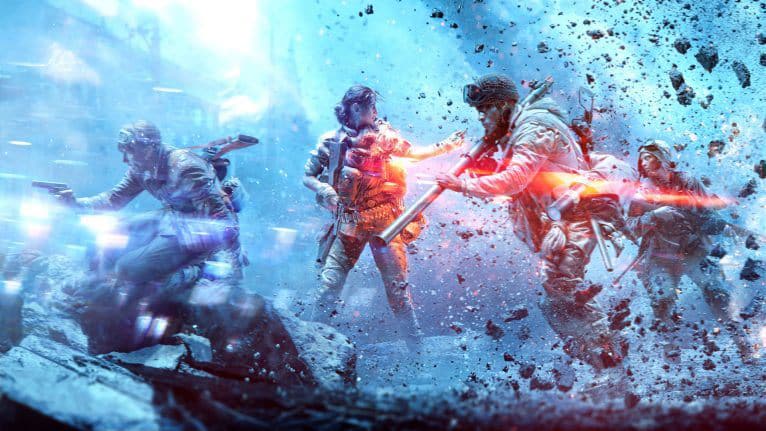 Even though BFV officially launches on November 20, there are several Battlefield V Early Access options available for those who want to enter the front lines sooner.

But, before we talk about all the options available to play early, don’t forget to make use of the Battlefield 1 Premium Pass giveaway that ends on October 31. You can download all four Battlefield 1 expansions for free; They Shall Not Pass, In the Name of the Tsar, Turning Tides, and Apocalypse. The offer is available on PS4, PC, and Xbox One. You need the Battlefield 1 base game to play the expansions, and it’s currently on sale for PS4 as Deal of the Week, and free to download for Origin and EA Access subscribers.

The Standard Edition of Battlefield V contains no early access to the game, however, it does contain the Enlister Pre-Order Bonus. These pre-order incentives include the following:

Origin Access Premier is your best option to get Battlefield V early access and to unlock the full game. If you don’t want to pay the R200 monthly subscription fee, then your second best option is Origin Access. You won’t unlock the full game, but instead, get a 10-hour free trial. Another important difference between the two subscription options is that with Origin Access you get to play only two of the four War Stories campaigns. You do, however, get access to all eight multiplayer maps and modes. 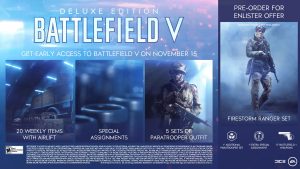 Lastly, keep in mind that you can cancel both subscriptions at any time with the click of a button.

Xbox One owners also get a subscription benefit with EA Access – it is exactly the same as Origin Access. You unlock all multiplayer modes and maps, and two single-player War Stories; Prologue and Under No Flag.

The only way to play BFV early for PS4 players and those on PC and Xbox One who don’t want to be tied to a subscription model is through purchasing the Deluxe Edition. 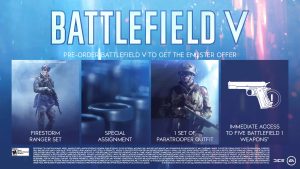 Looking at the above prices I highly recommend that PC and Xbox One players rather choose one of the subscription models. If you don’t like Battlefield V, then you can simply cancel your subscription or choose not to purchase the game after you’ve tried it. Remember, you don’t own any games you unlock; you can purchase it at 10% discount, or play it as long as you are a subscriber on Origin Access Premier.

Related: Why You Should Take Notice of Battlefield V Specializations for Guns & Vehicles

For everyone else, Battlefield V releases on November 20 on PC, PS4, and Xbox One.