Biped came out of nowhere and delivered one of the most satisfying and hilarious co-op games I have played in a while. The game does not last long but its co-op gameplay managed to leave me in stitches as I attempted some of the unique and challenging multiplayer puzzles. In short, Biped follows the story of two robots as they land on Earth with the mission to activate beacons throughout a range of stages. The story goes nowhere but the magic lies in the fantastic co-op experience that saw my brother and I almost die of laughter during our time with the game.

Working together is key to completing Biped and as the game progresses, levels get harder and each sub-level, which acts as the real challenge, gets more complicated. Each robot can be controlled individually but there’s a catch. You left leg is controlled with your left analogue stick and the right leg with the right one. This means walking around and controlling your cute robotic companion requires you to time your movements perfectly. Flicking each analogue stick in a specific direction will move your legs and simulate a walk. Moving both legs at the same time lets you glide across specific areas too but these are far and few between as the game’s exploration and puzzles all rely on the tricky movement mechanics. This is where Bipde shines as each level provides a unique approach to the leg movement system. Wiggling your left leg to place it on a platform right before it disappears and then using your right leg to flip a switch at the same time is tricky at first but the whole game is extremely accessible and before you know it, it all comes naturally.

The devious puzzles that await through the local co-op campaign are where the heart of the game lies. Crossing a bridge that matches your robot’s colour while timing your steps to counter your co-op partner’s movements requires trust and communication. If you are the red robot, for example, you can only stamp your foot down when the floor is red, and the blue robot when it is blue. At first, it sounds simple but before I knew it, I had swinging pedestals, to step over, distracting platforms to avoid all while making sure I stepped when it was my turn and my brother did the same. If one of us messed up, the platform vanished sending us both to our death. 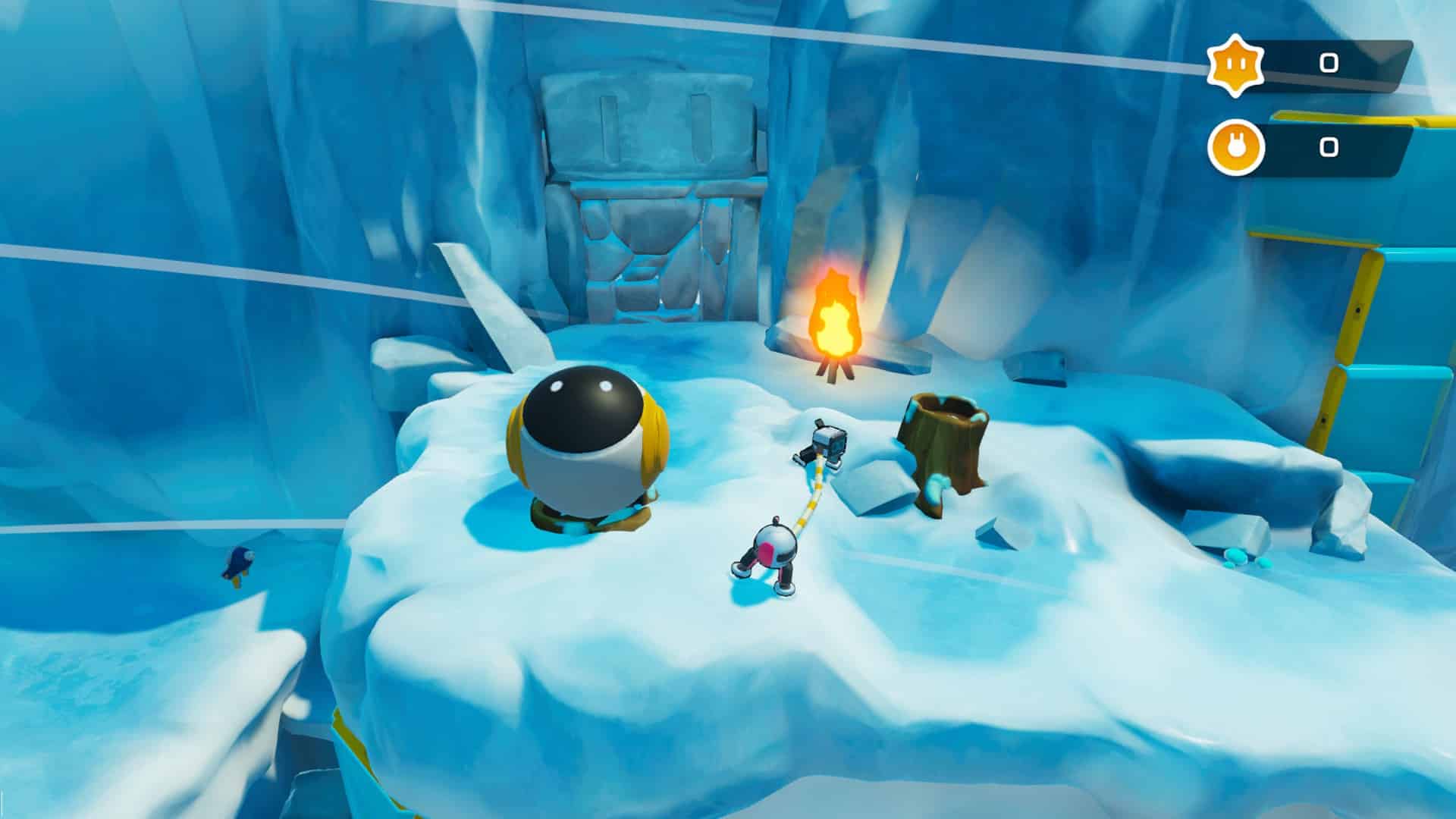 The ever-challenging puzzles are a load of fun no matter how many times you die. At one stage, my brother got to the end of the area but I fell to my death right before. He then had to sit at the end and tap the floor with one foot to change colour while I risked it all by walking my way towards him avoiding all obstacles and timing my steps all at the same time. Later levels saw us tied together by a rope while using it to swing each other across gaps and grabbing obstacles along the way. This sort of co-op system has never been seen before and I don’t know why it took so long to get showcased.

With that being said, while the puzzles and gameplay are fun, it is over way too quickly and I could not help but feel that they all could have used a little more time in the spotlight. The 16 sub-levels and eight main stages keep you busy, but the co-op mechanics are so fleshed out that they could have kept us going for weeks on end if the developers at NEXT Studios made a few extra stages. The levels also don’t integrate the mechanics together at all. It would have been nice to have us mastering the rope while tackling the colour-changing floor and obstacles all at the same time. As if the starter stages all build-up towards a fun and challenging end-game extravaganza. 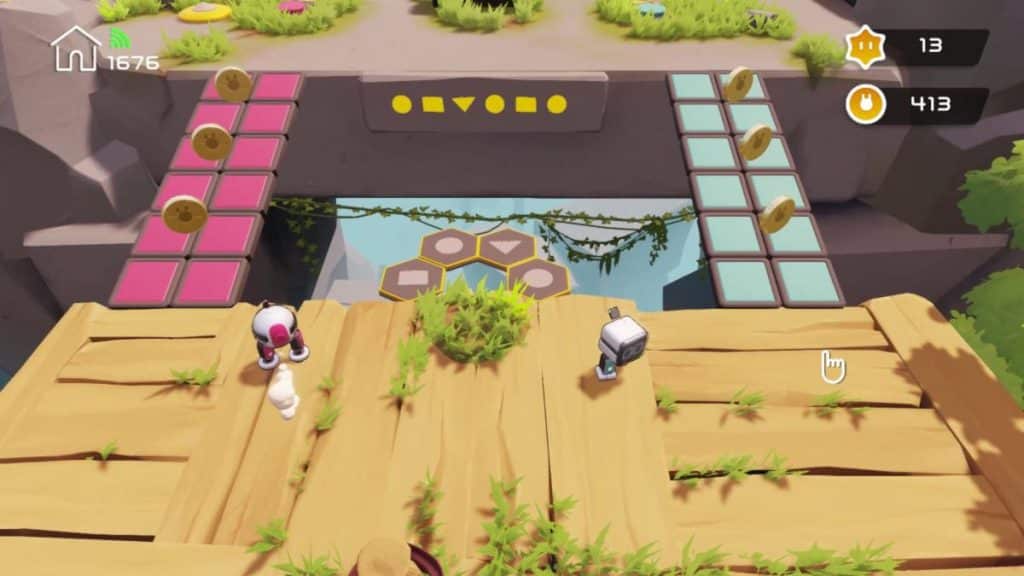 I hope the developers at NEXT Studios grow on the great fun and success that Biped introduces in its short campaign. There really is endless fun to be had if they took what the game does well and expanded on it while at the same time combined it all together. They have a jewel on their hands here, it just needs some polish.

There is a single-player campaign in Biped too. It does not last that long, has a fraction of the content but at least it is something. The game has mainly been created with co-op in mind and it works. I do wish there was an online mode though as during the lockdown, it would have been great to play with a friend on the other side of the city that I have not seen in a while. Every stage also has a range of sub-objectives to complete such as beating the level under a certain time, collecting all the coins and stars and not dying a specific amount of times. These are fun to keep track of but don’t reward you with enough reason to complete them. You can also spend coins to unlock some cosmetic items for your robots such a googly glasses and a chicken head hat. 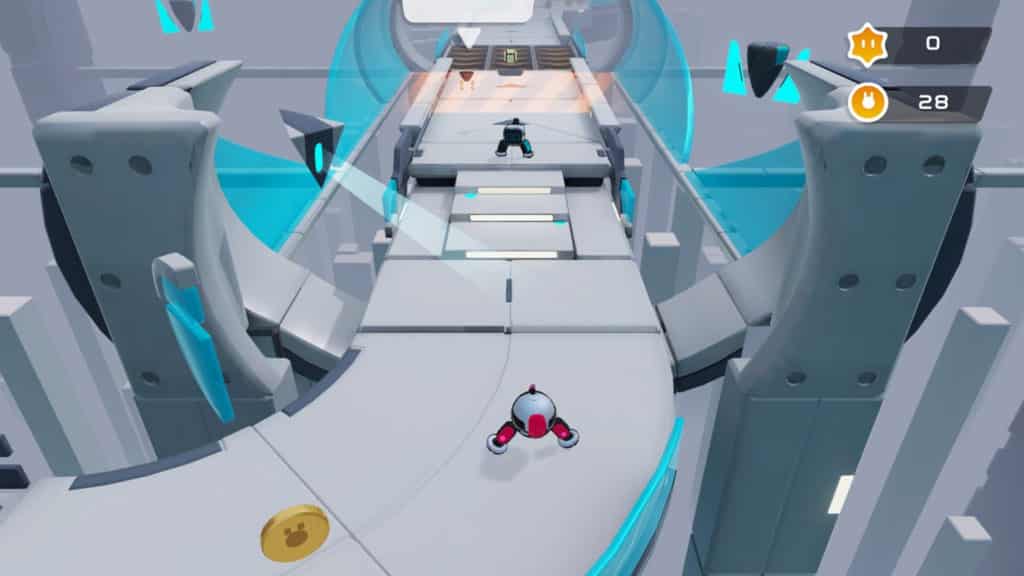 Biped is a load of fun. While I wish it was a little more fleshed out, it managed to cause some friction and laughter throughout its campaign. I hope if the developers at NEXT Studios create a sequel, we see the co-op mechanics combined together to create an even more detailed experience with some challenging puzzles to solve. It is short, but its asking price is super-low making it an affordable and fun game.

Thie Biped review was based on a code sent to us by NEXT Studios.