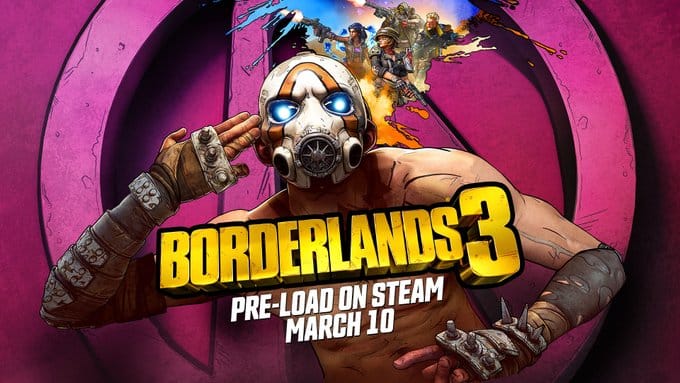 Borderlands 3 is releasing on Steam next week on 13 March 2020 and if you are picking the game up and have a few questions on how the process works then we have you covered. Gearbox Software revealed a list of FAQ that covers the Steam release including transferring your save from the Epic Games Store to Steam, cross-play support and launch times.

First off, the game is now available to be added to your wishlist on Steam. Just like any game, head over to the Borderlands 3 Steam page and add it to your account. As of now, pricing is not available but it should be soon.

According to Gearbox and 2K Games, Borderlands 3 on Steam will be available for pre-load beginning on 10 March 2020 and the game will go live on 13 March at 17:00 South African Time. The game will require 75GB of storage on PC.

How will cross-play work on PC between Steam and the Epic Games Store?

The supports PC Cross-Play between Steam and the Epic Games Store with the power of SHiFT Matchmaking. When launching the game for the first time on Steam, and on Epic after installing a new patch, you’ll be greeted by a “PC Cross-Play” screen and the option to enable or disable this feature. A pre-existing SHiFT account is not required to participate in Cross-Play.

Will I be able to transfer my save files between the Steam and Epic Games Store versions of Borderlands 3?

Yes! Your save data can be transferred between the Steam and Epic PC platforms, but you will have to move your save files manually. By doing so, you run the risk of potentially losing your save files, so we strongly recommend that you make a backup copy of your save games before you attempt any manual transfer of saves. We’ll have detailed instructions on how to transfer your Borderlands 3 PC save file on support.2k.com in time for the Steam release.

When the game is first released on Steam, you will only be able to send in-game mail to other PC players who own Borderlands 3 on the same storefront as you. We plan to patch in support for in-game mail being sent between the Steam and Epic platforms in the near future.

If I already bought Borderlands 3 on the Epic Games Store, can I play campaign add-ons purchased via Steam?

No. You will not be able to play the campaign add-ons on a particular platform without also owning the base game on that same platform.

Can I unlock Steam Achievements if I transfer a save file for Borderlands 3 on Steam?

Can I play Borderlands 3 on Steam in Offline Mode?

Yes! Just as with the Epic Games Store version, Borderlands 3 on Steam supports offline play, though you will need a one-time internet connection to verify ownership, as well as download any patches and hotfixes.