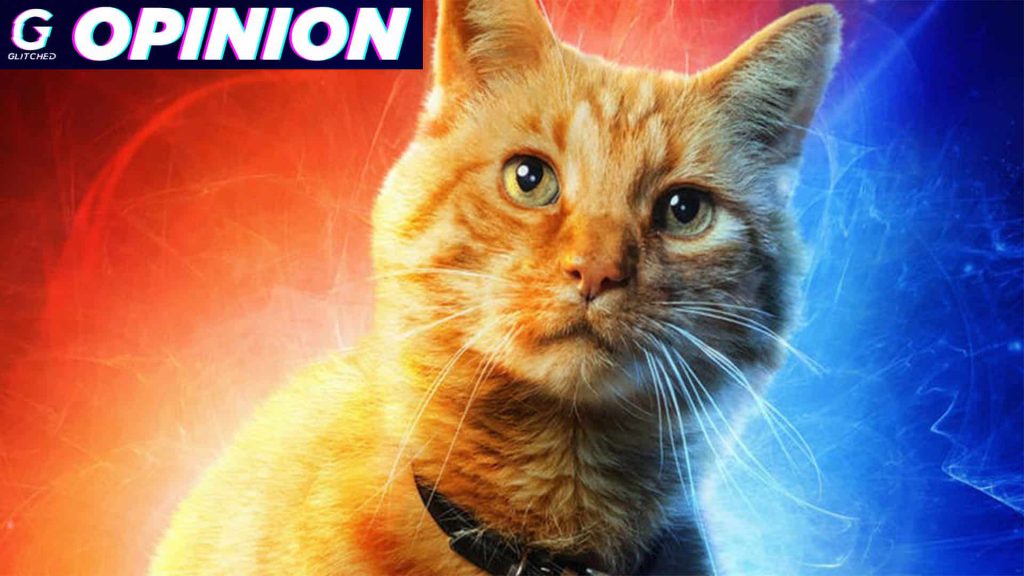 Captain Marvel hits cinemas across the globe this week, on 8 March 2019. We simply can’t wait to see the film that leads up to Avengers: Endgame and there’s definitely a lot of talent on display. From some of the shorter teaser trailers, you will see Goose, and Nick Fury interacting with the little bundle of joy. Captain Marvel’s cat isn’t only an adorable feline friend, however, as there is a lot many people probably don’t know about it.

Although we haven’t seen the film, the comic books tell us a lot more about Captain Marvel’s cat. Therefore, consider this a spoiler warning before you read further, as some of these points might very well make it into the film, or one of its two scenes after the credits start to roll. Let’s kick things off with something that shouldn’t really be a spoiler.

Let’s start with something that shouldn’t be considered a spoiler. Captain Marvel’s cat first appeared in the comic books in April 2006 with Giant-Size Ms Marvel #1, and then it was called Chewie. This name was reportedly chosen as a reference to Star Wars’ Chewbacca. In the upcoming Captain Marvel film, however, the cat’s name is Goose.

The name has been changed to be more a more up-to-date pop-culture reference. The name Goose is a pop culture reference to Nick ‘Goose’ Bradshaw, as Goose in Captain Marvel also acts somewhat as Carol’s co-pilot. For those who want to know even more about this little furball, the feline actor’s real name is Reggie the cat. 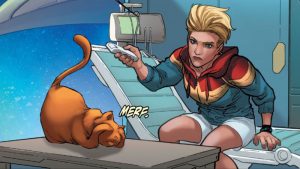 If you are standing up, it is probably a good time to take some catnip and take a seat. Captain Marvel’s cat isn’t even a cat at all, but instead, part of a highly intelligent alien species known as Flerkens. Flerkens come from Earth-58163 in the Marvel comic book universe and has some frightening powers as well (more on that later). Even Carol Danvers herself didn’t know that her cat was a Flerken until she met the Guardians of the Galaxy, at which point Rocket freaked out, revealing that the cat wasn’t actually a cat at all.

In an interview with Nerdist, Samuel L. Jackson actually dropped the “F” bomb. When asked if he would star in a buddy cop film with Captain Marvel’s cat and what they would call such a movie, Samuel L. Jackson said he would call it “Fury and Flerken”. This pretty much confirms that Goose isn’t just a regular furball and that we will very likely see this reveal during the Captain Marvel film since critics who have seen the film also suggest that Goose plays a much bigger role than you would expect.

Captain Marvel’s cat, as mentioned above, is a powerful, intelligent alien being. That means the little furball has some nasty powers, including tentacles that would make even Cthulu mythos fans squeal. These tentacles are massive and if you are wondering how they could fit into the tiny little mouth of a cat, then the next section will answer that question.

Goose’s tentacles are accompanied by sharp teeth and many of them have their own heads with even more teeth for enemies to deal with. Goose can also use multiple objects and items with these tentacles, showing immense control over their movement in the comics.

With tentacles and all, Goose might also be the way that Nick Fury loses his eye (in the MCU) and you can already see in Nick Fury with a small wound, presumably inflicted by Goose in the trailers. With powerful tentacles sprouting from its cheeks, Goose can definitely take out an eye and do some serious damage.

Captain Marvel’s cat can actually play a big role in Avengers: Endgame and could be one of the keys to defeating Thanos. Yes, I said it and before you ready those pitchforks, hear me out. Flerkens have control over pocket dimensions they hold in their cheeks, which explains where the tentacles come from.

Their mouths, therefore, act as transportation hubs, gateways to other dimensions. These pocket dimensions even give the ability to travel through time and space. Sure, it might not be the most pleasant of experiences to go through a pocket dimension via a Flerken’s mouth, but it is certainly possible as shown in Captain Marvel issue 8 released in 2014. Using these pocket dimensions, Flerkens can teleport between physical spaces, dimensions and even break the boundaries of reality itself.

Therefore, Captain Marvel’s cat could very well play a big role in Avengers: Endgame as well. In theory, Thanos’ snap could have transported those “dusted” to another dimension and Goose could have access to this dimension. Alternatively, since Flerkens are incredibly rare, Thanos might not take what looks like a house cat seriously, giving Goose the opportunity to steal the Infinity Gauntlet (or even just snatch a stone or two) and transport it to a pocket dimension inaccessible to the mad titan. Heck, it could even be the way they get Tony back to earth, but that’s all just fan theory at this point.

We’ve established that Captain Marvel’s cat isn’t ordinary, not by a long shot. However, probably one of the most shocking events in the comics was when Chewie had kittens, a few dozen litters of them, in fact. To be precise, Chewie had a total of 117 kittens. This all took place when Rocket was still trying to convince Carol that Chewie is a Flerken. To her surprise, instead of giving birth normally, Chewie laid 117 eggs that hatched into 117 cute furballs on Captain Marvel’s ship.

Rocket, being the opportunist that he is with a general dislike for Flerkens, even wanted to sell the kittens on the black market, at which point all hell broke loose. The story, however, does have a happy ending as Captain Marvel found a planet for the Fler-Kittens to grow up on. I, for one, can’t wait to see what happens when Rocket and Goose hopefully meet during Avengers: Endgame.

If you simply can’t get enough of Goose, then you are in luck. Check out this video below featuring Reggie the cat in a live recording going about his business and then tell us what you think about Captain Marvel’s cat in the comment section below.