Crackdown 3 was supposed to be the showcase for that “Cloud power” Microsoft and the Xbox team have been hyping since the start of this generation – A sandbox filled with mayhem and destruction. Now, nine years after the release of Crackdown 2, the third entry in the franchise has finally released and unsurprisingly, the Crackdown 3 campaign feels a bit dated.

Don’t feel like reading? Well then, check out our Crackdown 3 video review filled with explosions below.

The Crackdown 3 campaign begins after a powerful and devastating blackout attack hit hundreds of cities. Survivors of these attacks took refuge in a city controlled by Terra Nova, led by Elizabeth Niemand, Terra Nova’s CEO. The city looked like a paradise, but survivors soon realised that things were not as they seemed, with the iron fist of Terra Nova ruling over them. That’s where you, a wrecking-ball of the Agency, comes into play.

Tasked with freeing the people of the city from Terra Nova’s grasp, you are a super-powered Agent who, with the help of a character called Echo, survived a deadly crash. Joined the Agency’s Director Goodwin over communication, you set off on a path of destruction. Players have a bunch of agents to choose from, but let’s face it, everyone is going to play with Agent Jaxon, modelled after Terry Crews. 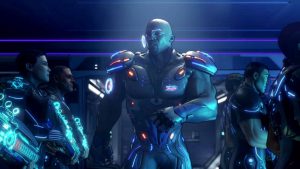 After picking Jaxon, who sports additional gains in the Strenght and Explosive statistics, I set off to blow some things up and bulldoze my way through the campaign. Crackdown 3 takes a decent shot at bringing more story to the destruction with several lieutenants you have to dispatch of, from a crazy AI to a mad scientist, all while you make your way to the final showdown.

These characters with their cheesy lines are somewhat entertaining, but the story as a whole just revolves around shooting your way through everything and it feels mediocre at best, with nothing special to remember. It is lighthearted and when you throw in some comedic one-liners from Terry Crews and some rants over the communication system from Director Goodwin, it is enough considering what it is. 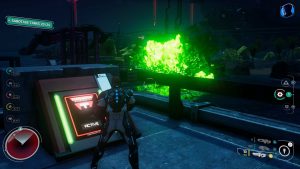 And what Crackdown 3 is, is basically a relatively fun shoot-em-up (or blow-em-up) with a gameplay loop that feels like something pulled out of the previous generation. Basically, you run around to points marked on your map, kill all the enemies and run to the next point. From refineries to prisoner detainment facilities and the odd missile launcher and more, you have to destroy all enemies while sometimes performing tasks such as throwing a rock into a machine or hacking a terminal by pressing one button.

The thing is, you have to complete objectives that are basically the same thing five, eight or even 12 times, all to unlock enough intel to get to a lieutenant. The Crackdown 3 campaign then feels very repetitive, much like you would find in a Saints Row title. 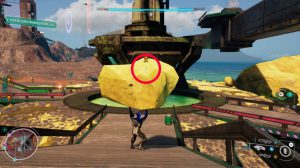 However, boss fights do mix things up a bit, as every boss has their own unique mechanic that you need to take care of. This all just boils down to shooting a specific target first or switching targets when something happens.

For example, Djimon Keita is the boss of the processing facility, and to defeat him in his massive mech, I had to shoot a core when he ran off to replenish his health. After each boss fight or when completing certain objectives, you also get treated to a cinematic, showing your progression in the story so far. 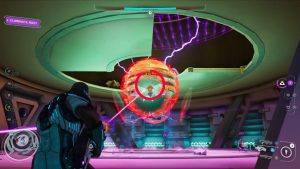 With that being said, the moment-to-moment gunplay in Crackdown 3 is fun. There are 24 guns and a bunch of grenades in the game and they all feel powerful, from a grenade launcher to an Arc Rifle (great for taking out robots), to your standard rifles, sniper rifles, plasma rifles and a shotgun. You can carry three weapons at a time and my personal favourite combination was that of the Arc Rifle, combined with a Grenade Launcher and a devasting Pulse Beam, which sets enemies on fire and cuts through them like nothing else.

Blasting away at enemies stayed fun even with the repetitive gameplay loop at play. With the exception of the healing grenade, the way to get some health back is to simply kill enemies, so the whole point here is to just keep shooting and shooting. Throughout the game, you unlock supply points where you can change your loadout, respawn if you die and jump straight back into the action. Through increasing your character’s power, you also unlock a few new skills, from a devasting ground punch as you land to a variety of additional movement options, including an Agency launchpad. 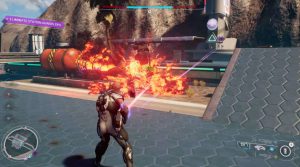 You have a few ways to increase your character’s power. The first and most obvious one is by simply completing objectives, with some of the objectives being fun like taking out a base of operations. Others, however, feel so dated, such as climbing to the top of a propaganda tower and destroying it, by driving over enemies to increase your driving skill, or by finding a small piece of Intel in the world.

Then, you get orbs scattered by the hundreds throughout the city. Agility orbs are your bread-and-butter, allowing you access to more movement skills. However, these are just out there in the open on almost every roof and everywhere else. It felt like such a chore picking up these orbs everywhere and to make matters even worse, the best way to increase your character power is by finding hidden orbs. 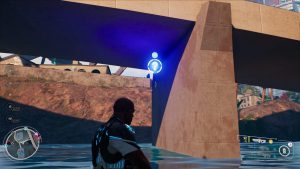 These orbs are fewer in number and they are either in hard-to-reach places or tucked away somewhere. As mentioned earlier, the gunplay is fun but when you have to stop and look around for orbs the whole time or struggle to make your way to the top of a building to get another agility orb you spotted, things get tedious and feel a bit unnecessary. Thankfully, you don’t have to collect all the orbs and I never felt as if I was at a power disadvantage against enemies on the default difficulty setting.

Playing on a PC just below the recommended system requirements still felt and looked great and I simply love the cel-shaded graphical style. Even so, I was a bit disappointed that I couldn’t blow up a small wall with a grenade launcher. The destruction that does occur, with vehicles blowing up and big pieces of Terra Nova equipment being destroyed does look great, but for a game that has been hyped up due to its destruction, it felt lacklustre. Sure, big moments of destruction do happen, but that is pre-recorded, in-engine footage showcased after completing an objective. 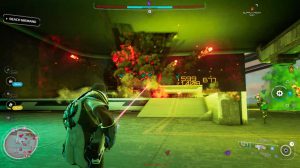 The game’s performance is solid, but I did run into a few technical glitches here and there. A few times, my character clipped into an object and twice, an objective was stuck at 85% completed as the last few enemies simply didn’t spawn, requiring me to restart the game.

Crackdown 3 definitely isn’t perfect, but at least the combat is fun. There is a lot to do in the city if you go after every last piece of Intel, grab every orb and complete challenges scattered throughout. However, apart from the boss fights, the gameplay loop is repetitive and I, for one, wonder if that will really be enough for fans of the franchise after 9 years of waiting for a new game. A new game that seems stuck in the past.

Crackdown 3 was supposed to be a big hitter for Xbox One and Windows 10 gaming, a revolutionary showcase of mayhem and destruction. The campaign, however, is nothing more or less than mediocre. The story is a bit cheesy and the highly repetitive gameplay loop doesn’t do wonders either.

Even with its flaws, the one-liners from characters are great and the moment-to-moment gunplay is fun. With some excellent performance on PC and lovely cel-shaded graphics, the game simply feels fun to play in short bursts. Crackdown 3 isn’t going to win any Game of the Year awards and with its dated mechanics, you might take several breaks through its campaign, which lasted us about 14 hours clearing almost everything on the map.

In the end, Crackdown 3’s campaign is a bit of a disappointment, but it is also a Terry Crews simulator with a tonne of explosions, so it isn’t all bad. Hopefully, the Wrecking Zone multiplayer will be better and feature the “power of the cloud” as we will be giving it a go and bring you our verdict in the near future.