Advertisement
Darksiders Genesis Review – The Pinnacle of the Series 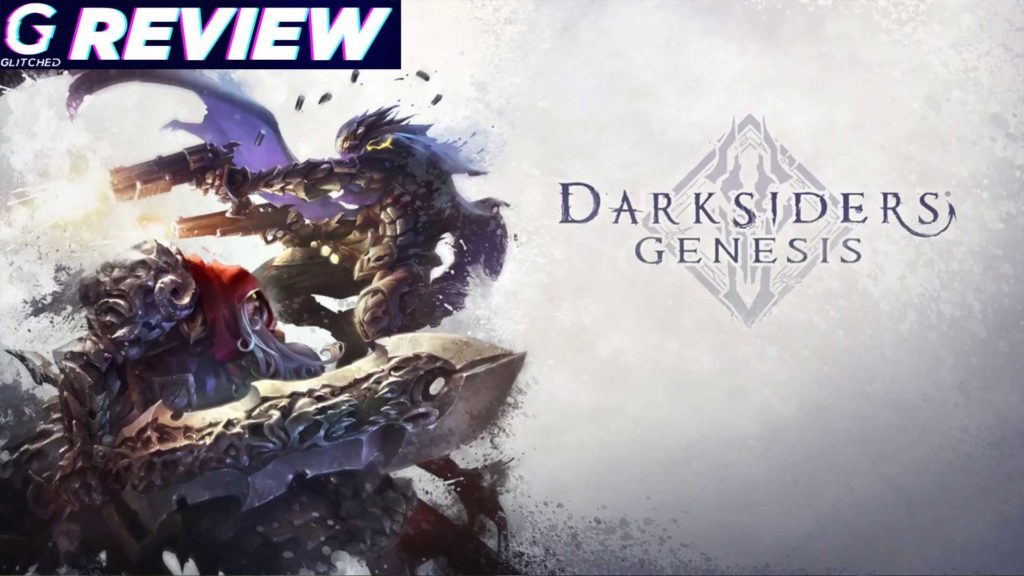 bThere’s really no hiding the fact that I was not a fan of Darksiders III. It was a major step down from the previous two games in the series in terms of its core experience. Bland combat, an empty world to explore and a dull protagonist. I am so glad that Darksiders Genesis came along to redeem the series for me as it could be not only one of the best hack and slash games I have played in aeons, but it is the best Darksiders game on the market. The magic of Genesis is how it manages to deliver the same traditional experience you would expect from a Darksiders game but with a new perspective. It simply works and works damn well.

Darksiders Genesis takes place before the original game’s plot. Lucifer plans on causing problems in the Balance by giving his “Masters” special power throughout Hell. The Masters include Belial, who is poisoning the waters of Eden, Mammon who is up to his no-good tricks, and others which I won’t spoil for you. Anyone familiar with the Darksiders story will find Genesis as a great way to understand much of the franchise’s characters, references and plot points often tossed into the first, second and third game.

The game rewards exploration and the level design is simply superb

Even returning characters like Samael, Vulgrim and others make for a great return to home for the story as they all deliver their fantastic roles backed by some brilliant voice work. In a nutshell, Genesis sees you control War and Strife through brand new areas, fight awesome enemies, slay massive bosses and gather loot while you are at it all while trying to track down Lucifer.

The game takes you to brilliant new locations including sprawling woods, massive weapon forges, and dangerous stormy rolling hills. Instead of the traditional open-world-like progression, Genesis takes on a chapter-based system where you progress through large-scaled areas littered with secrets to discover, enemies to face and upgrades to find. Like most adventure games, backtracking back to old stages is highly recommended as often you would not have the correct item to solve the said puzzle or get to the specified location. It is as Darksiders as it gets and anyone familiar with the series will feel right at home here. This exact sense of discovery made every level in the game a joy to complete. Every nook and cranny has something cool to see and find. Be it a Trickster Door hidden in the distance and crammed full of possessed boxed or a hidden side boss which I totally missed the first time around and only after returning to collect missing Boat Coins did I get to slay him. The game rewards exploration and the level design is simply superb. I found myself spending well over an hour and a half on each stage exploring, collecting treasures and trying to find every missing treasure chest and coin on my log.

It is also important to the overall progression of both War and Strife to explore these great levels as while the game hands you specific new abilities at certain points, most of their weapon upgrades and new abilities are found by completing puzzles, finding hidden areas and beating these side bosses. If anything, every mission, apart from the boss fights, deliver a great way to spend your time. It also helps that the levels look fantastic and are all brought to life in the Darksiders art style we have all come to love. 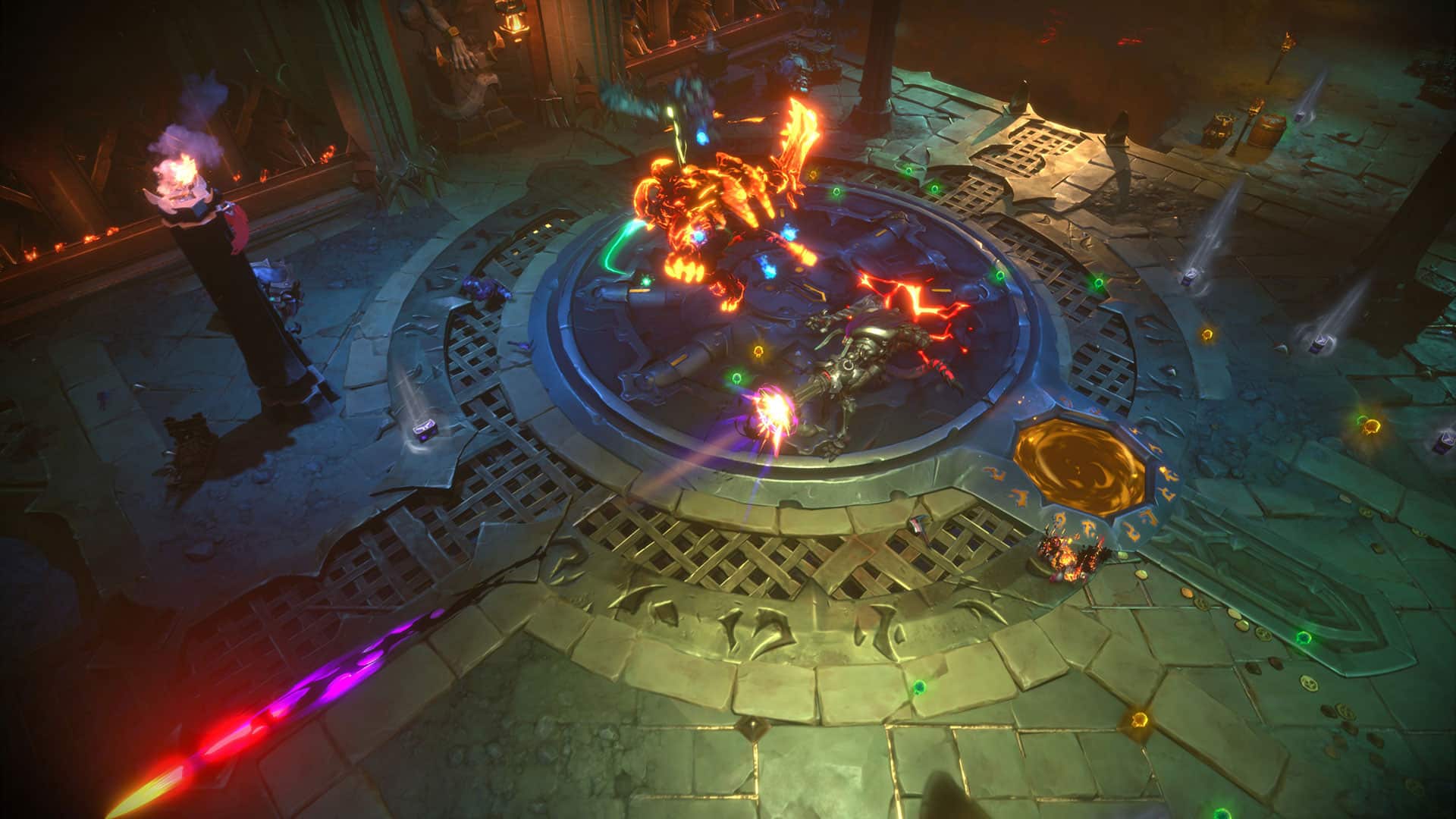 Darksiders Genesis marks the first in-game appearance of the last horseman of the apocalypse, Strife. We have played entire games with War, Death and Fury (unfortunately) and Strife’s introduction comes at a great time as his gun combat works extremely well for the game’s new top-down hack and slash, dungeon crawler-like pace. As the game takes on this top-down camera angle, controlling both characters is as easy as ever. Playing with a controller, you can walk with one analogue stick and aim Strife’s guns with the other. If you are playing as War, then he is free to slice and dice enemies up and if you need to use the Vorpal Blade to activate a switch, you aim with the right stick.

Buttons take a while to get used to especially for Strife. You need to click in the right analogue to use his items compared to War where you just aim and throw. However, it came naturally to me after a few hours. 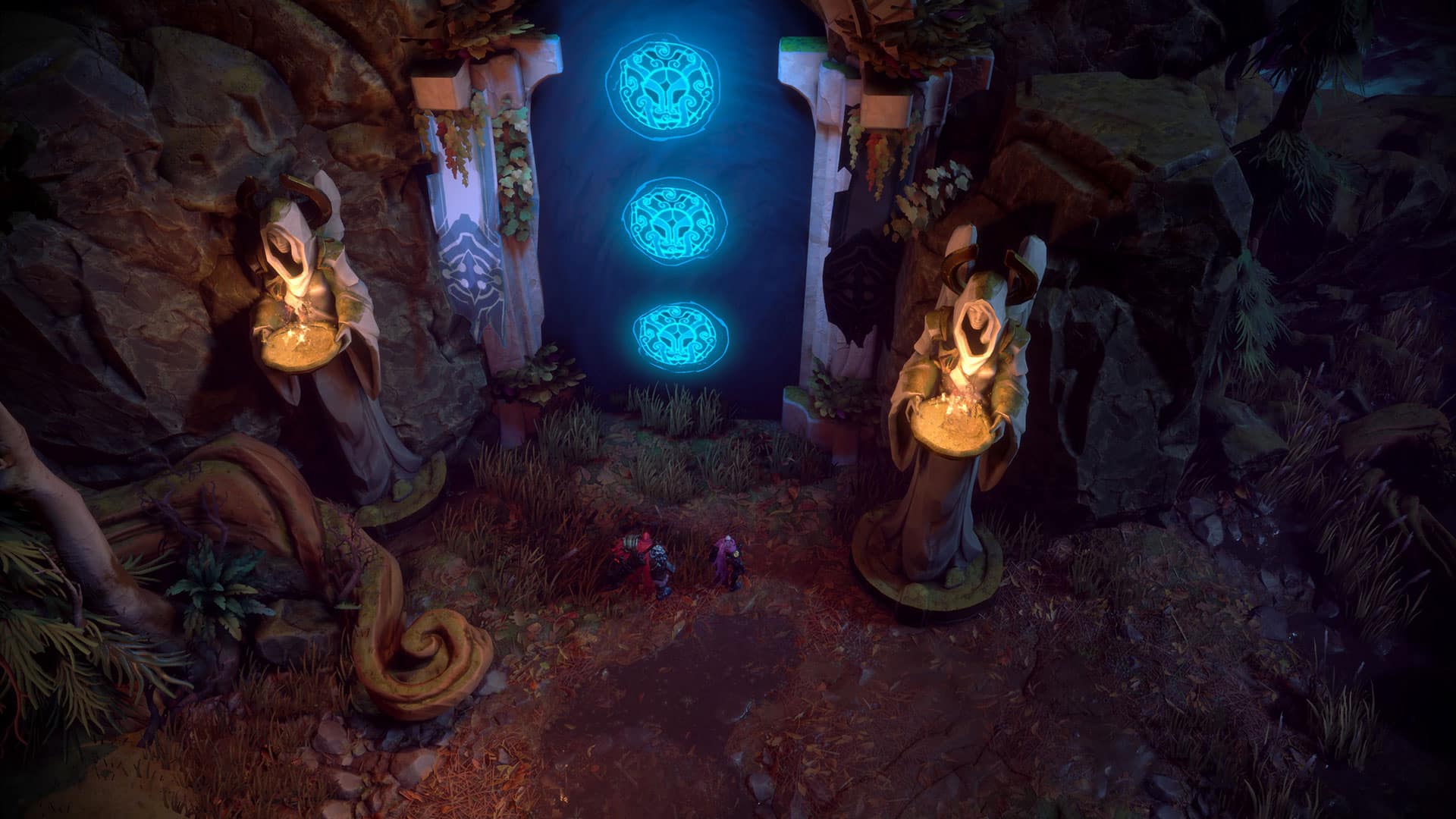 Combat in Darksider Genesis goes from clumsy to fun and back to clumsy at times. It is the same fast-paced hack and slash action I love from the series but with a new camera perspective. This also comes with its own downfall as the camera is often unforgiving. Giant walls, rocks and other large objects can often get in the way as you are trying to slay a group of Sand Fleas only to have them pounce at you and send you flying off a cliff. Your character is highlighted through any objects that you walk behind but not the enemies and without the ability to move the camera at all, it often becomes a frustrating fight. However, these moments were far and few between and nothing that ruined the fun.

When you get past the wonky camera, combat is superb in Darksider Genesis. You can control War or Strife at any given time and each of them has their own combat approach that is the complete opposite of one another. War is a brute that prefers close combat. His giant sword swings can be felt through the screen as he leaps around and shatters his foes against the ground. He can combo his attacks giving you a great amount of variety when it comes to slaying your foes. His abilities are pretty much the same as past games like the Blade Geyser that sees a wave of sword spike stab through the ground. 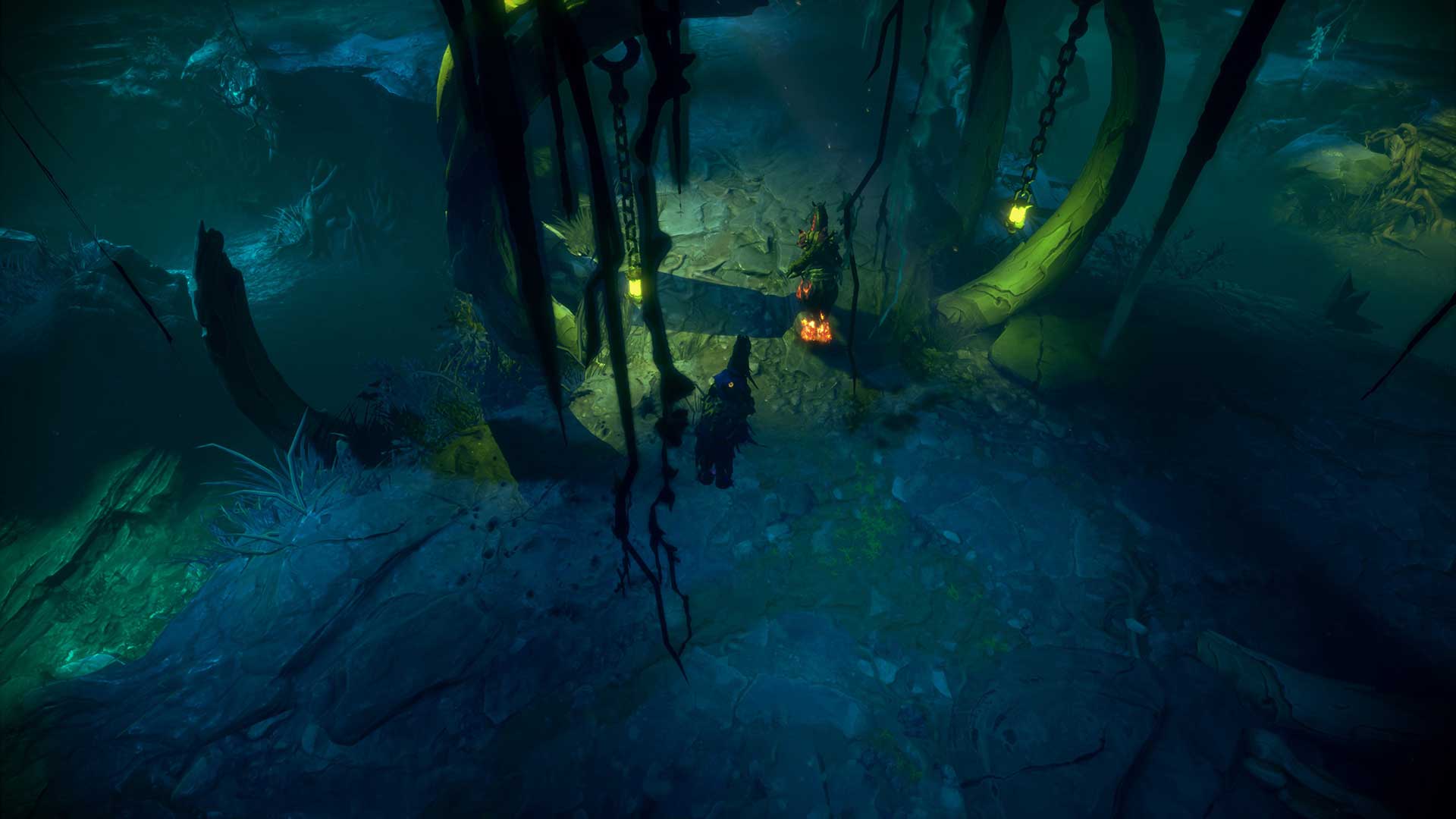 Strife, on the other hand, is a little bit more squishy. He is fast and agile and opts for a ranged attack. Sure, he has blades that can melee but his true potential is found in his guns. Strife relies on ammo which drops from enemies you slay. This ammo depletes and his special ability is called Hostreak which sees his current ammo type change to a super-crazy charged version.

Both War and Strife can obtain a range of new weapon ammo and damage variations throughout the game. Instead of a whole new weapon, these enhancements and ammo types can be swapped around at will. War, for example, can equip a lightning enhancement that can trigger a chain lighting attack at enemies. Later on, he also gets a death touch which marks enemies and once they die, they explode with a massive wave of energy. 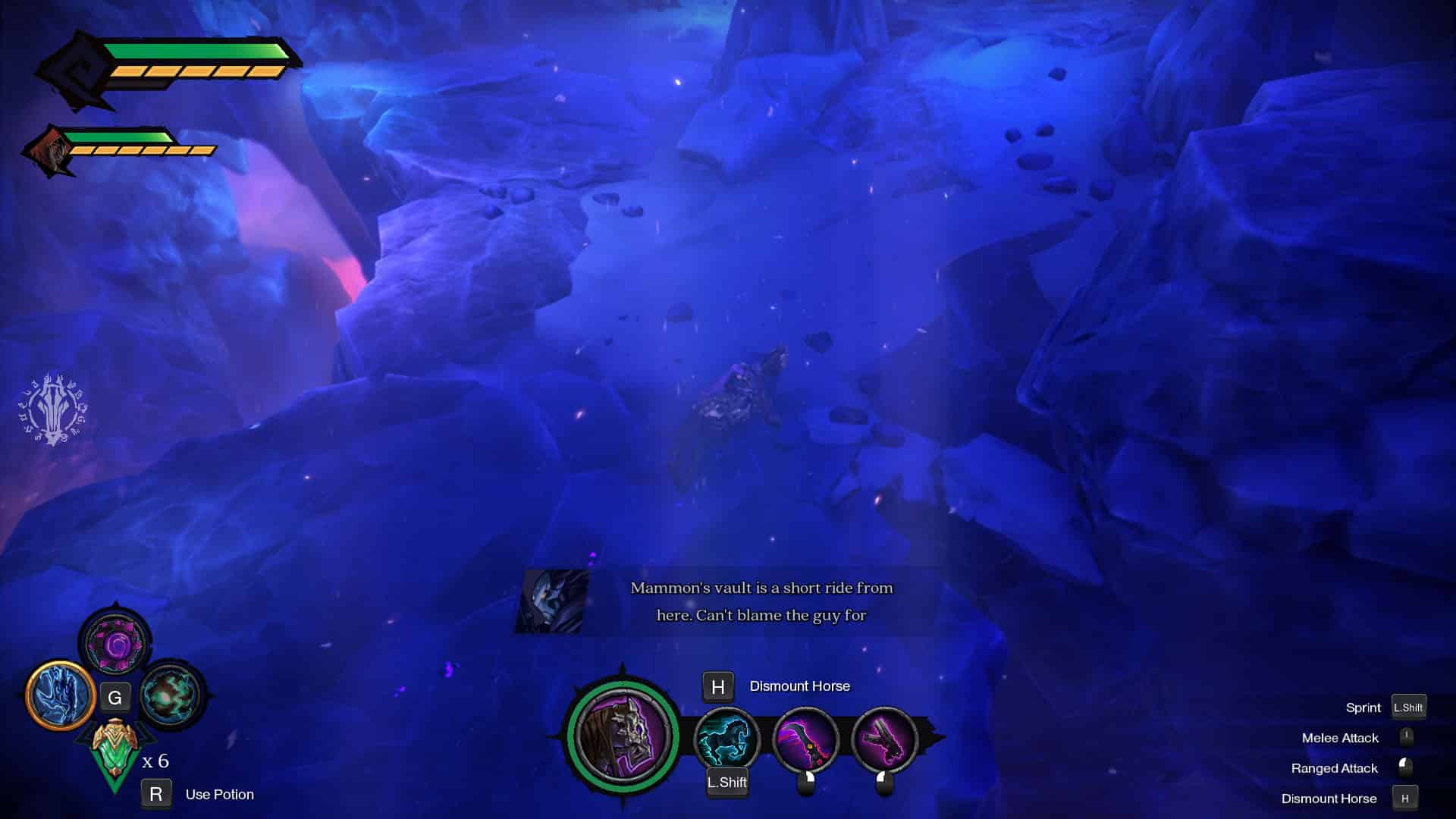 Strife’s ammo types act the same as War’s enhancements. The only difference is that you can equip two; one for primary and one for secondary fire. This ranges from a super-charged shot that decimates enemies to a fire AK47-like mode. When Strife’s Hotstreak fills up, each ammo type has a more powerful, but limited charge where he deals special damage and it looks fantastic.

Combine these two characters, and everything I have mentioned above and you have one hell of a combat experience on your hands. Playing co-op means you have another player next to you at all times and the combinations are unlimited when you combine War’s abilities with Strife’s ammo types. There is a lot of fun to be had here and it is made better with a friend. However, even playing alone, which I did for the majority of the game, felt great. 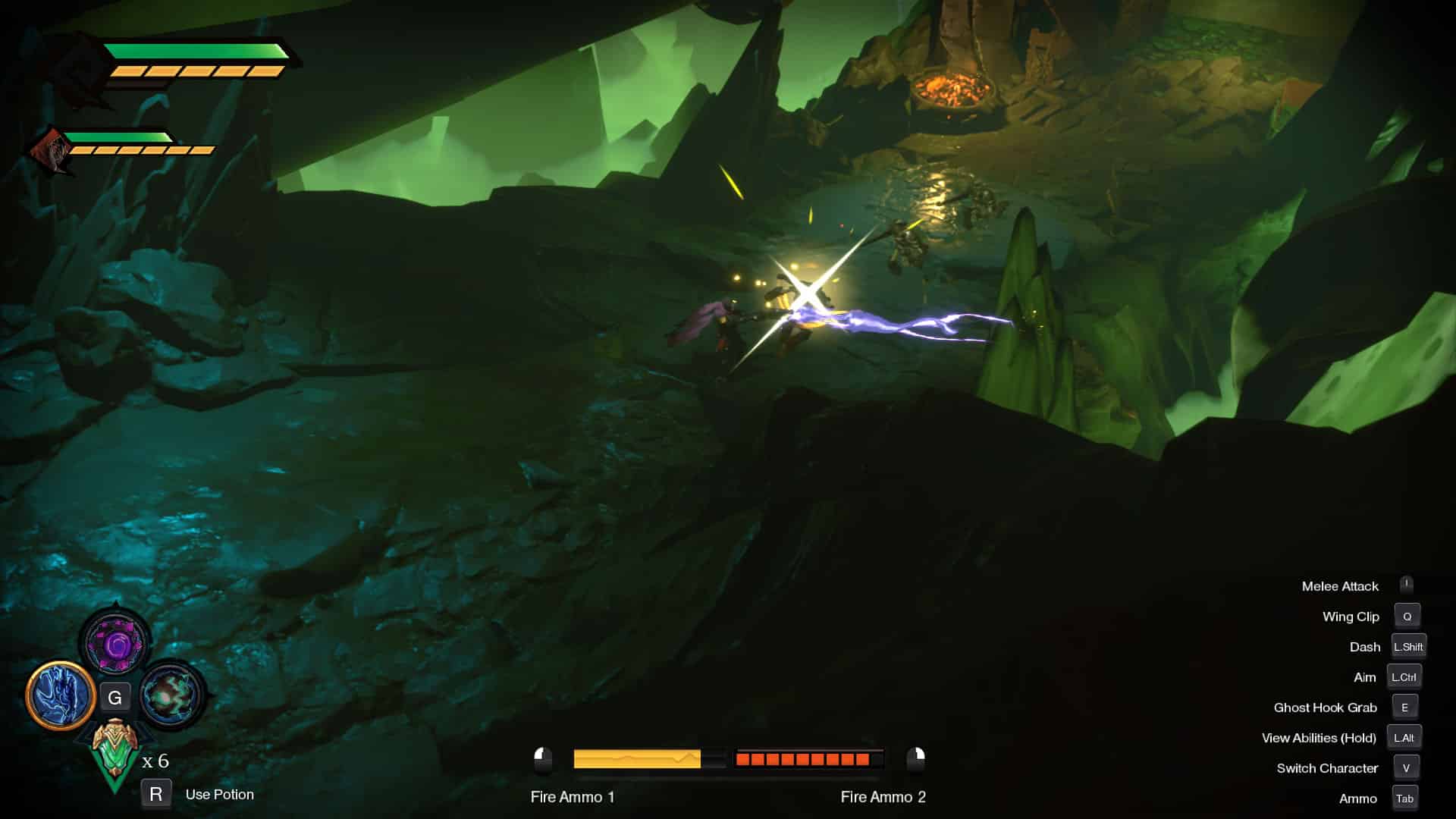 Darksiders Genesis might look like a Diablo-esque game but it actually is far from it. Even the loot system is quite different. Enemies Creature Cores which you can place in a skill tree-like system. Each Core has a bonus or special effect which can then be upgraded by collecting or buying them from Vulgrim. You can then build War and Strife the way you want with specific bonuses to health, stats and even special effects like burning the ground when you dash.

All this will be tested in the arena which is a big end-game experience. Multiple waves of enemies, tougher challenges and of course, better loot is key to keeping this experience fresh and it works well. I will find myself in the mode quite often as I try to build the best characters and fight the endless mode.

I thoroughly enjoyed my time with Darksider Genesis. The ending leaves much to be desired but the experience to get there was brutally fun and exciting. It takes around 12-15 hours to complete the main campaign and the arena is added content so overall, the game is a great package. I will be playing this next year on a console just to experience it all over again.

This Darksiders Genesis review was based on a code sent to us by THQ Nordic. The game has been developed by Airship Syndicate.