There is a lot going on in Deathloop at any given time. The game’s interwinding mechanics, story and characters created this sort of visual roadmap in my head as I pieced together who was going to be where and at what time so I could plan my day. While the game’s atmosphere is often lacking that “Arkane magic” seen in the Dishonored series, Deathloop is still unlike anything I have ever played before. It gives me hope that the future of games will grow beyond this traditional cliche gameplay loop and manage to incorporate deeper mechanics and game systems that provide a truly refreshing experience.

I won’t go as far as to say Deathloop is the greatest game I have ever played. Nor will I say it is my Game of the Year contender. Twenty-five hours into my loops and the gameplay did become tedious. The dialogue often gets loud and obnoxious and the various districts scattered around the island of Blackreef do start to blend into one another. What started out as a slow and steady, hiding in the shadows and stabbing people in the head from behind game, turned into a guns-blazing shootout. You know, as most of these games often do. Regardless of how tedious the general gameplay got, the constant urge to find more leads, gear and kill more Visionaries kept me going. For that, I have to acknowledge the fantastic layered elements that make Deathloop the experience it is. 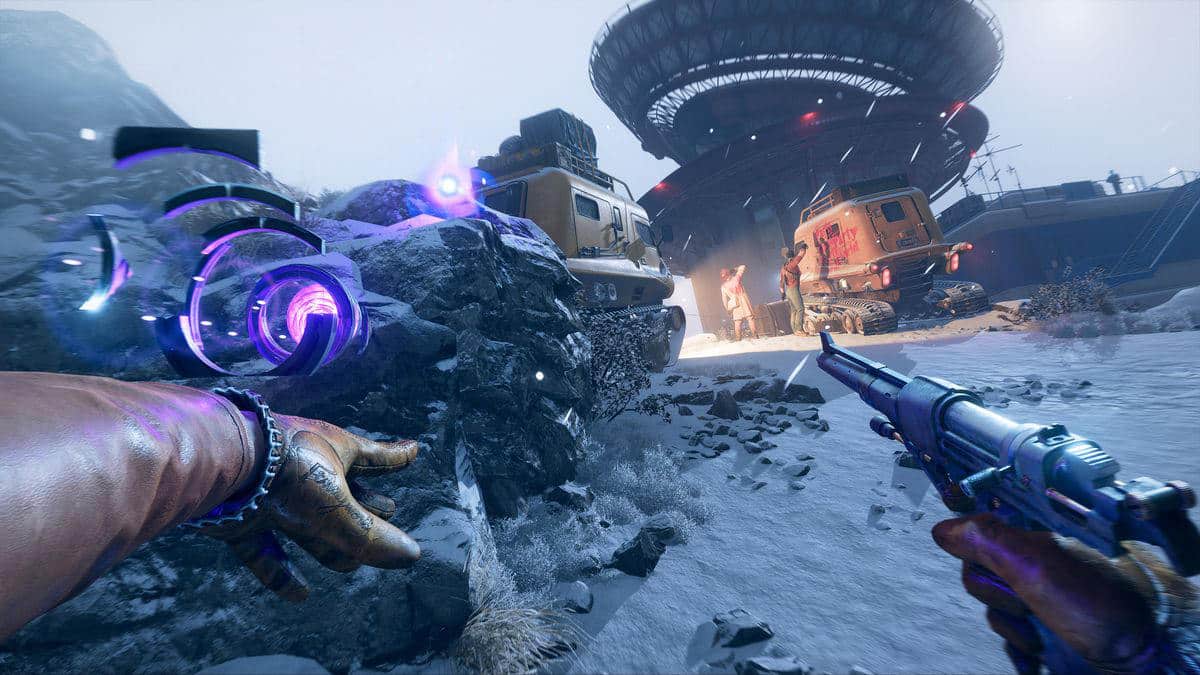 Deathloop is set on the island of Blackreef. A space-time fissure has caused the island to repeat the same one day over and over again. You play as Colt who wakes up one day with no memory of who he is and how he ended up on the beach of the island. He soon discovers that he is actually the head of security for the island and now wants to shut down the loop and free himself from this miserable repeated day. The thing is, Colt has to kill all eight of Blackreef’s Visionaries in order to break this loop. He also has to do this in one day and avoid being slaughtered by Julianna. The so-called “protector” of the loop.

It is also important to note that the island is filled with crazed goons who now want Colt dead too. It is also important to note that Colt knows nothing about these eight Visionaries and the aim of the game is to learn everything about their actions, characters, where they go and try and perfect the best way to take them out in one fell swoop. So that is Deathloop’s premise in a nutshell but it gets a lot more complicated. 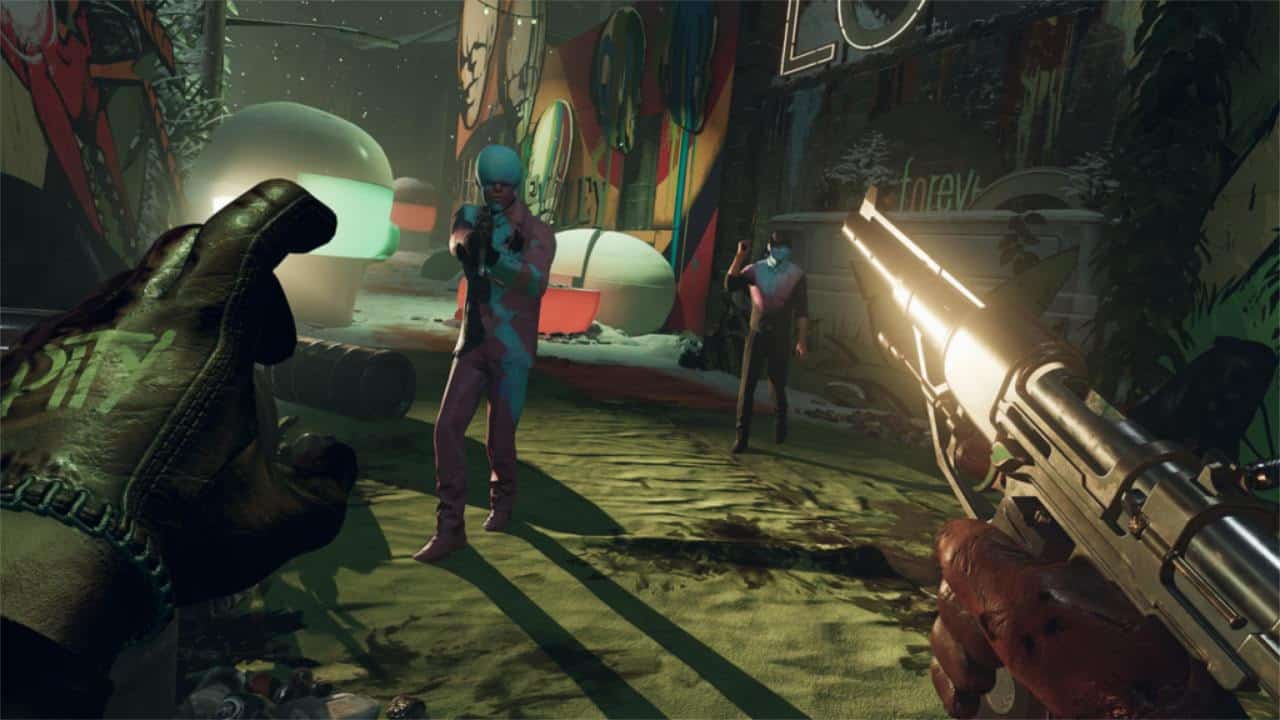 Colt has to replay this day over and over again while figuring all of this stuff out. It also doesn’t make it easy that most of the important information is hidden in voice recording, emails and notes. So while exploring each district on Blackreef, I had to search high and low for all sorts of things to read, listen and pay attention to. Deathloop doesn’t just hand you the objectives by any means. Think of creating a board of suspects. As you go about the game you can place these people’s photos down, stick down some notes around their picture and then start slowly unravelling wool by lining each of these Visionaries up with one another to create the perfect detective board. This is what was going on in my head as I played through the game.

The general discovery aspect of Deathloop goes a long way and basically carries the gameplay on its back. It also helps that even if the note was a massive wall of text and I didn’t have the patience to read it, all important details are nicely summarized in the game for my convenience. This is a lifesaver, to say the least, because the sheer amount of lore and documents found in the game will make your eyes sore. Great for those who love reading in-game chat boards between eight crazy people. Not-so-great for those who sit up until 2 am playing games. 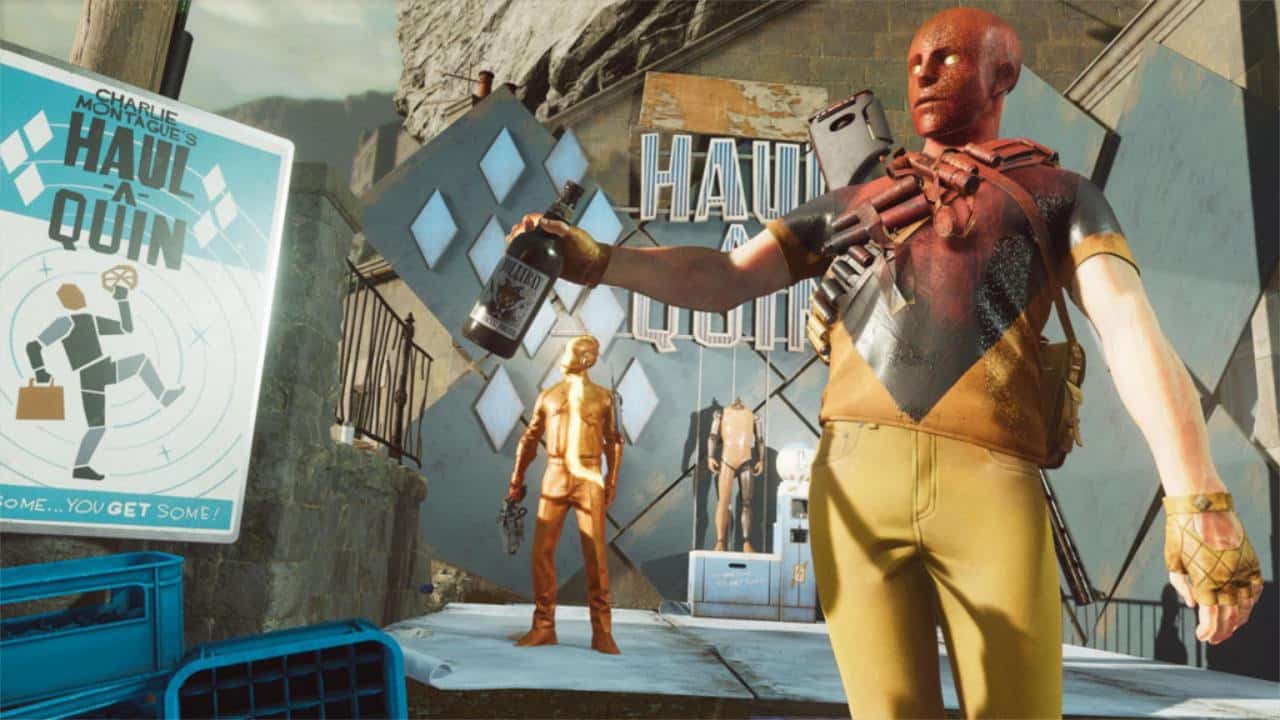 As I repeated each day, more and more details on the island came to light. Who goes where, how so and so is involved with another Visionary and what they do during each day at specific times. Slowly but surely it all kind of makes sense and presents more creative ways to take down these characters and often, how to take down multiple at a time. Each day is split into three times and each location is open to explore at any given time. However, the important stuff happens at a certain hour after discovering a lead provided by the game. These leads come in two types. You can hunt down gear like legendary weapons and slabs or a lead to nail down a Visionary and their agenda.

Because Deathloop repeats the same time, often I was forced to go outside of my usual schedule to discover new things. This meant instead of going after Harriet’s slab at the start of the day, I had to choose another location in hopes to discover something new. It worked. Deathloop shines best when these moments happen because as I mentioned before, they don’t hand you the leads. Instead, this constant sense of discovery kept me going and the end result was extremely rewarding. 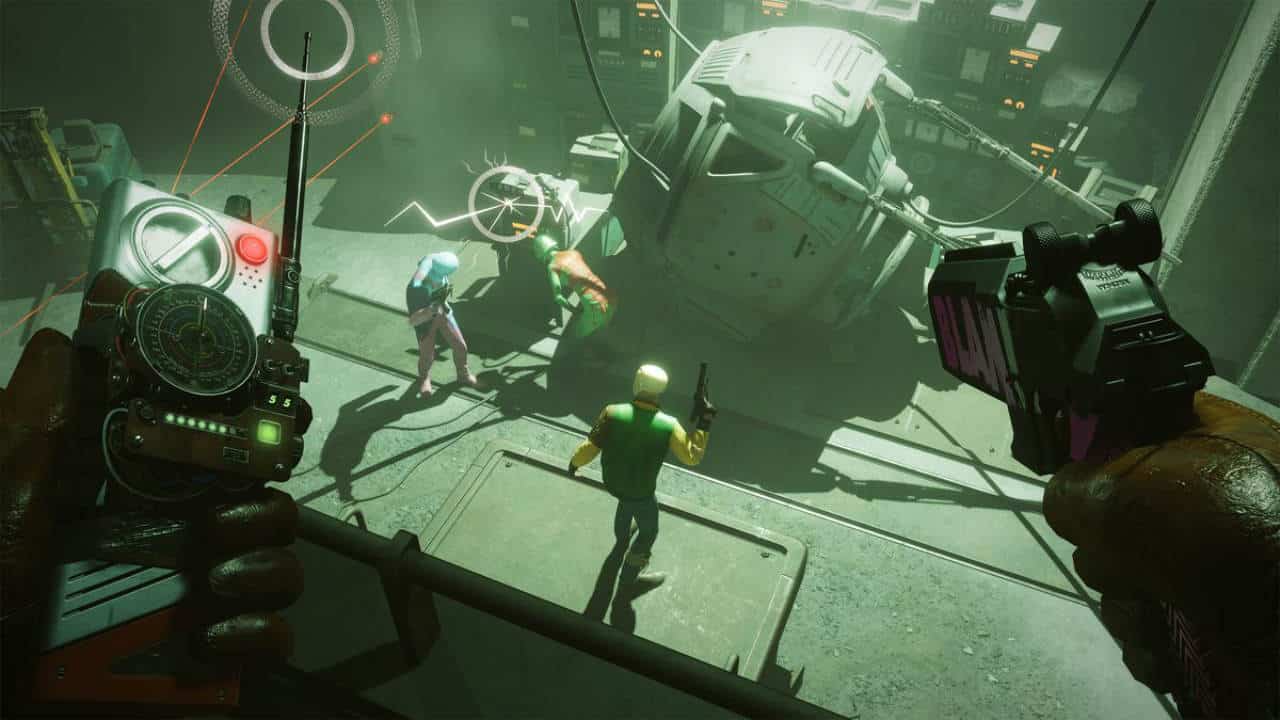 Visiting each of the districts at certain times of the day also provides a somewhat new experience to take in. Be it new goons to kill, a party that only happens at night or basking in the morning sun at Karl’s Bay. Blackreef isn’t the biggest and most outstanding game world I have ever seen and explored but the day shifts brought new life into each district. Again, it is all about how you go about the day that determines the experience you have and how much you get done before it ends.

Thankfully, Deathloop never felt overwhelming when it came to these repeated days and time zones. Once I entered an area I could explore it as much as I wanted before leaving and progressing the time. It was a sigh of relief knowing I had all the time in the world to find every lead and secret. Even if this meant spending a few hours completing one lead only to discover the next part was in another area at another time.

During all of this, the gameplay comes into play. Colt has some guns he can use, finds new gear and has supernatural powers thanks to slabs he finds on certain Visionaries. You are only as good as the gear you go out and find in Deathloop and that is the truth. Some slabs granted Colt a brute-like buff, some let him teleport a short distance while another let me link enemies together and shoot one in the head killing them all. Guns are okay too. You can snipe if you’re into that, find silencer weapons for a silent approach or go in loud with shotguns and SMGs.

The game also includes legendary weapons that come packed with unique perks and features. These are often hidden behind leads you have to find in order to kick off a quest to hunt them down. One specific shotgun saw me enter an area at night and complete a crazy hunt for presents before running through a gauntlet of lasers at a specific time. There are loads of these weapons to find and if you’re keen, they offer some unique gameplay mechanics to encounter and tie into the overall story quite nicely. 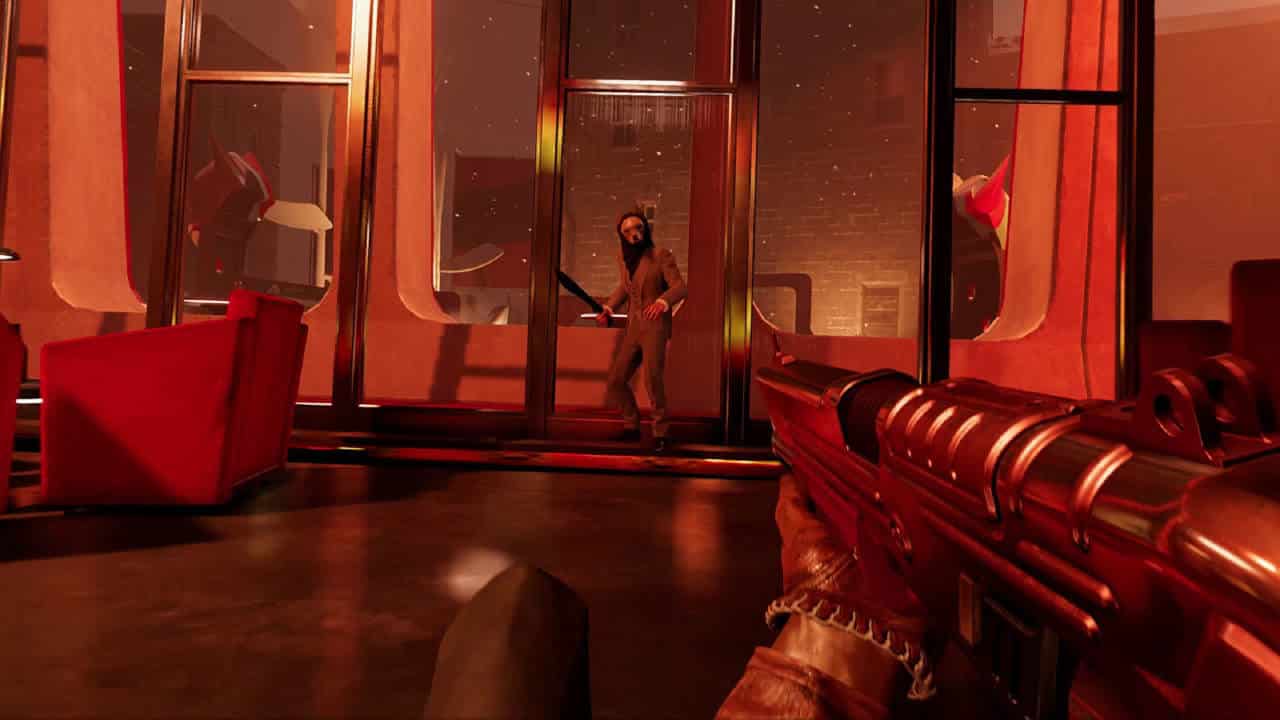 Deathloop also relies on its daily cycle to cherish the gear you find. At the end of each day, if you have not infused the weapon trinkets, slabs, weapons and abilities they get recycled into currency. I had to pay careful attention to my inventory and often had to go into a location with an open slab slot or weapon slot hoping I would get a new one to put into these slots. If I killed a Visionary with a slab and didn’t have space to equip it, I had to drop one of mine and lose it. The inventory system is fantastic in Deathloop even if it screwed me over multiple times.

Of course, there’s also Julianna. She often invaded my game throughout my experience in Deathloop and also tried to screw me over. She just wants Colt dead and if she kills you three times before escaping, it restarts the day and you lose your stuff. You can fight and hopefully kill her and she drops gear and slabs she may have equipped. Julianna got tougher to kill the further into the game I got and the more Visionaries I murdered in that day. She goes from being a pushover to a real threat and my heartbeat often sped up like crazy during these encounters. 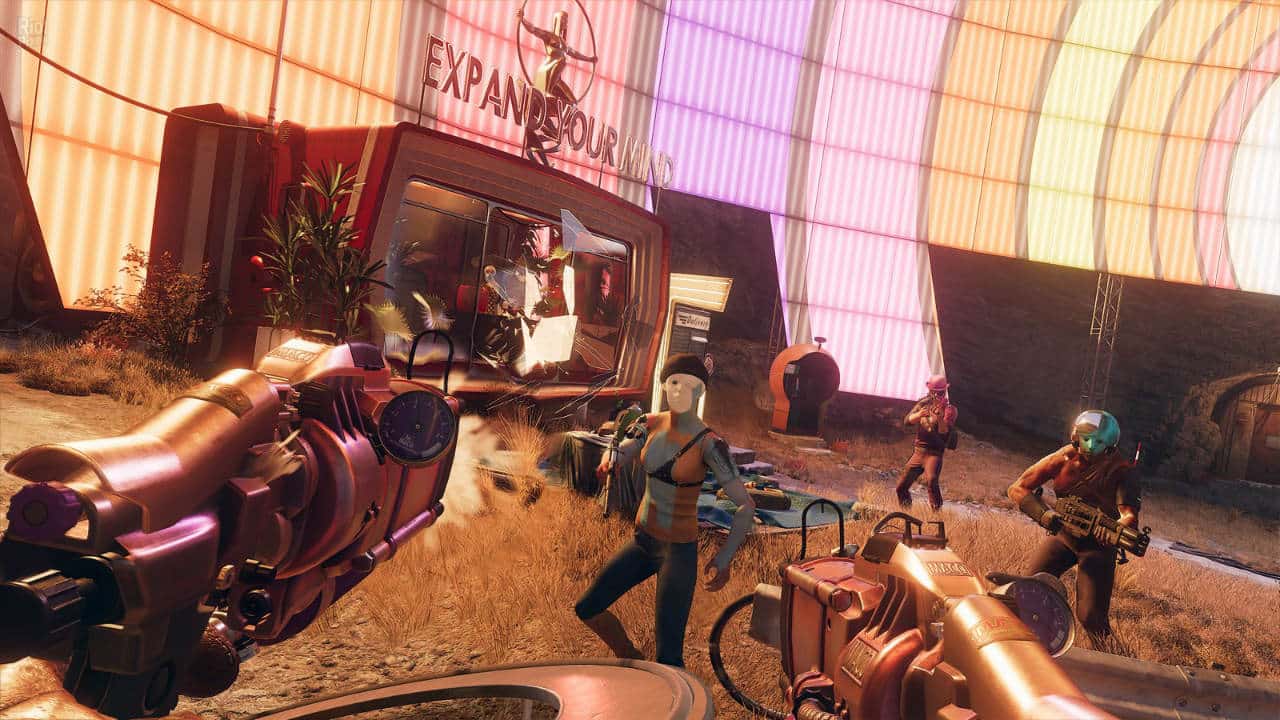 Outside of the standard game, can also invade as Julianna either by going into a friend’s game or a random player’s world. Here I was tasked to kill the player. This mode has its own progression system, gear and perks. The more you invade, the more XP you get and the better your gear gets. I found this mode shallow and sort of like an afterthought. Deathloop is so great already that it really didn’t need this. Julianna could have remained as a single-player-only invasion and it would have been enough.

It also doesn’t help that I was unable to invade a friend’s game. I tried at least twenty plus times this past week to invade four friends and it always failed. Not good. At least I got to experience the random invasions a few dozen times. As I mentioned, this mode didn’t offer me much excitement. I get that it plays into the game’s story of “Colt versus Julianna” but it almost feels tacted on as an extra.

When it comes to the DualSense on the PS5, Deatloop feels fantastic. The haptic feedback is especially impressive and you can literally feel every single footstep Colt takes. These nudges also change depending on the surface he is walking on. It is wonderful. I did immediately turn down the speaker though. Julianna’s voice gets annoying as it blasted at my face during the start of every mission. She is also annoyingly arrogant and loud. The banter between her and Colt gets tiring very quickly. 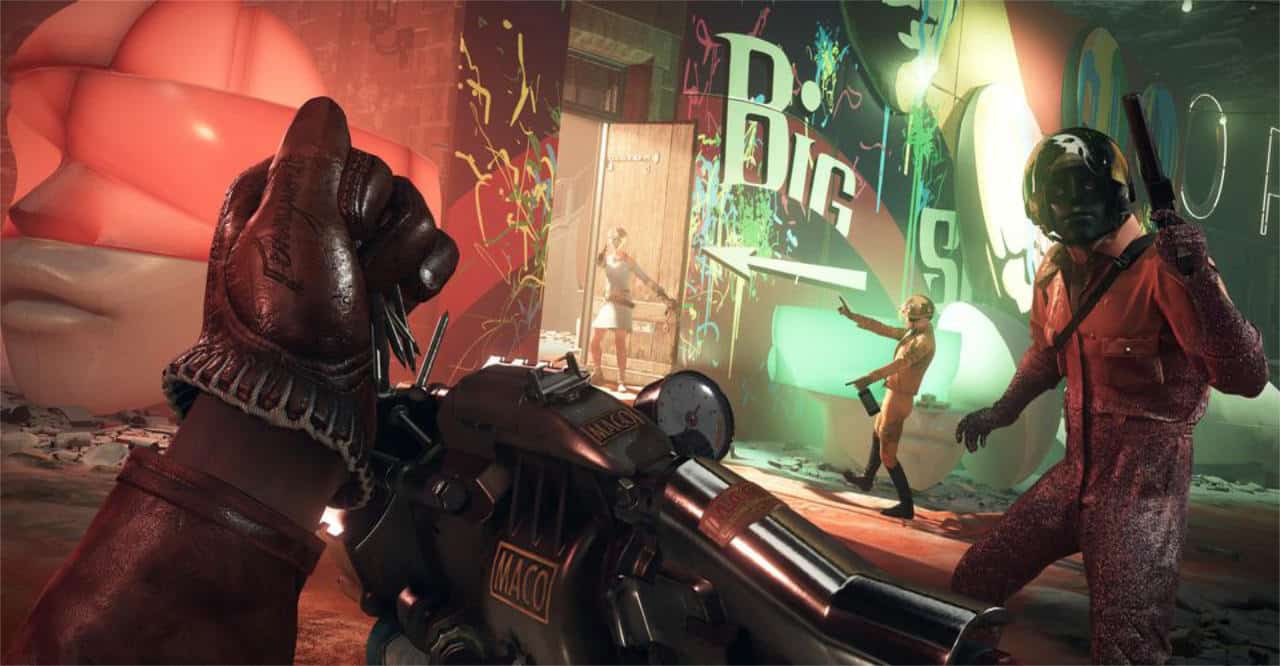 Deathloop is unlike anything I have ever played before and I absolutely loved it. The detective mechanics are masterful and the game’s repeated loop is exciting. The world isn’t as atmospheric as I hoped and the gunplay can get a bit tedious. Thankfully, the game’s deep lore, layered story and characters help carry these other not-so-great elements to glory.

This Deathloop review is based on a code sent to us by Bethesda.

Gaming | PC | Deathloop Review – All in a Day’s Work