The Devil May Cry series is back after its questionable “reboot” in 2013. Instead of following the story of that “emo” Dante that we loved and hated in the DmC reboot, Capcom and series veteran Hideaki Itsuno developed a sequel to Devil May Cry 4. It has been ten years since Nero, Dante and the Devil May Cry gang teamed up to fight Credo, however, Devil May Cry 5 takes place five years after the events of the last game. 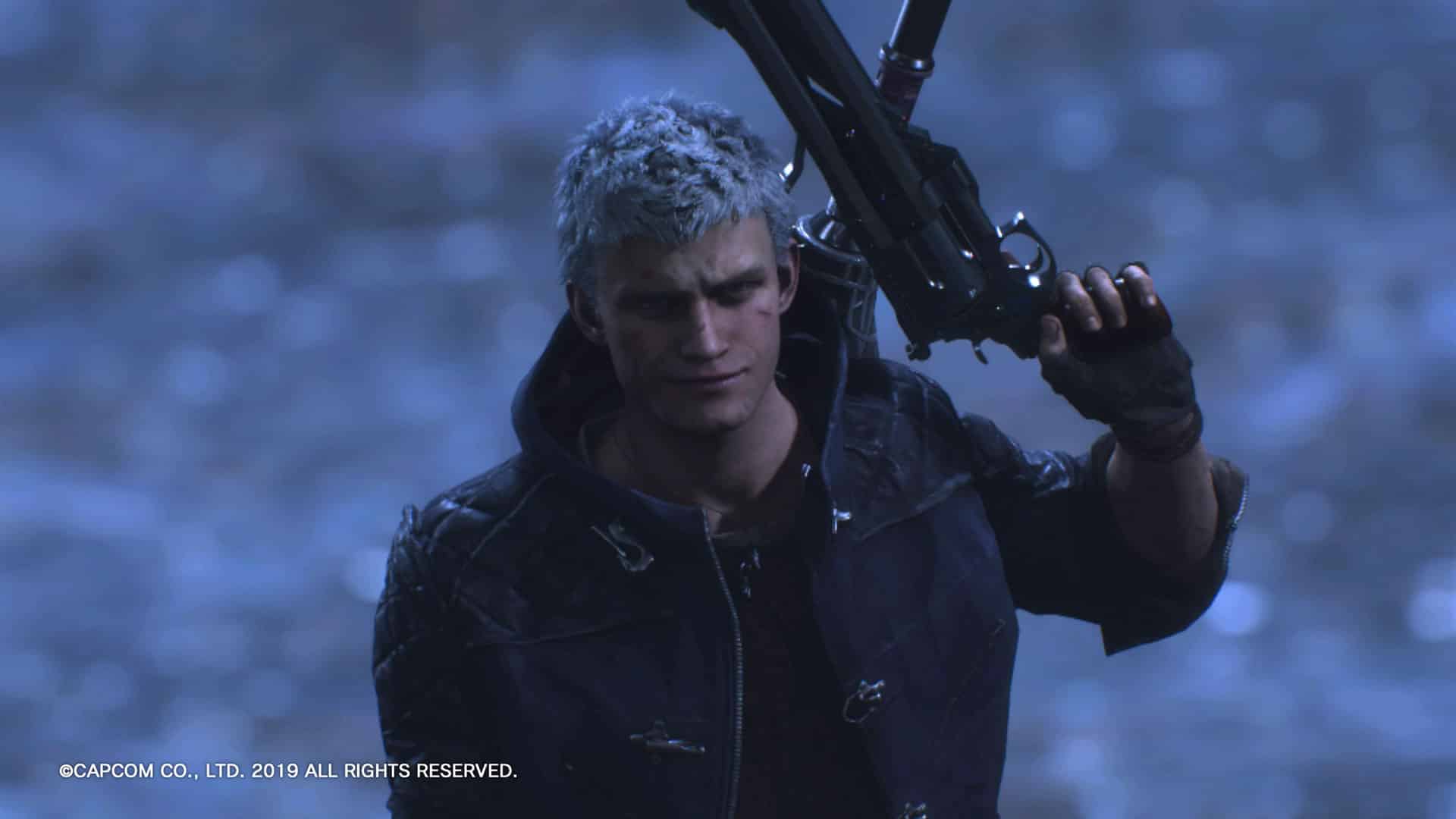 Devil May Cry 5 starts off throwing you into the deep end. From the opening, you have no idea who is who and what in the demon world is going on. The opening fight follows Nero, Dante and a new mysterious character named “V” take on a demon named Urizen. After they all fail to weaken the creature, the story reveals that a giant tree to the demon world appeared with this “Urizen” character in charge of it all.

The plot unravels as you learn that Nero’s demon arm, which plays a big role in Devil May Cry 4, gets ripped off by a demon, Dante gets knocked unconscious during the fight with Urizen and this V character can summon three demons to help him fight in battle. All in all, much of the game’s progression sees you head towards these giant tree-like pillars in the sky and destroy the demon boss that resides near it in an attempt to weaken the hold that the main tree has on the planet. Like past entries, Devil May Cry 5 takes place across a series of missions. Some of them have predetermined characters to play but some of them let you choose between Nero, Dante or V as a playable character.  At the start of every mission, you can spend your red orbs on new abilities for these three characters, all dependant on who you picked. Nero, instead of his demon arm which was ripped off, now uses special mechanical arms called Devil Breakers designed by Nico.

These Devil Breakers come in various forms and Nero unlocks more as you progress the game. Every boss demon you kill has a special ability that gets turned into a Devil Breaker with a similar attack style. These Devil Breakers can be used in combat with a press of a button and holding down that button performs an ultimate attack with it but also destroys the breaker at the same time. Enemies can also easily break them if you get attacked while performing any one of the special attacks 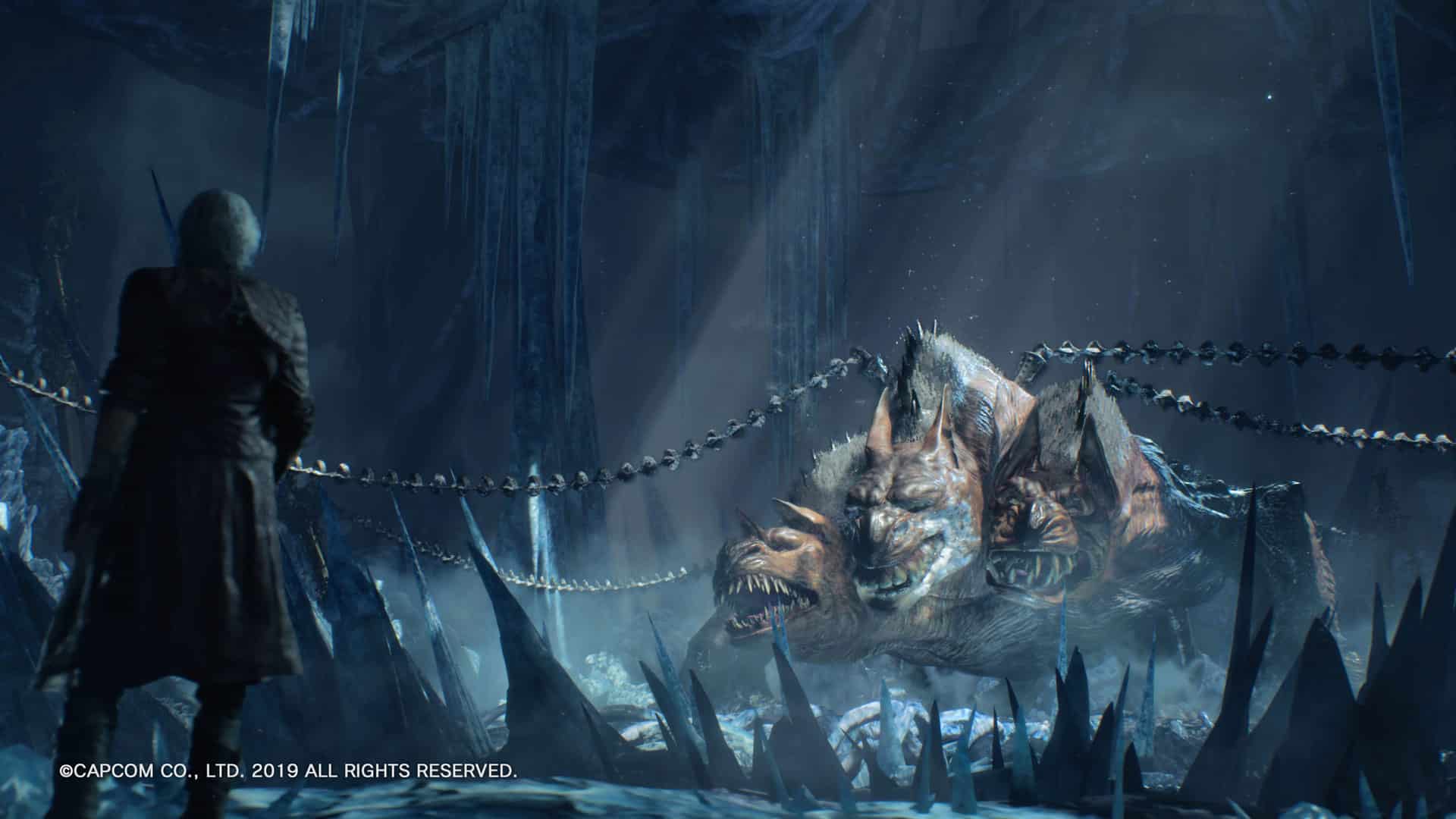 Nero’s combat style was my favourite out of the three playable characters. The Devil Breakers and the variety of them meant that equipping different loadouts of them resulted in a different combat approach each time. Punch Line shot out a missile that staggered enemies in the air and let me focus on another threat while it kept them at bay. I could then ride the rocket through the air at times hitting everything around me and looking pretty badass. Tomboy let me power up Nero’s Red Queen sword to max which then let me fly through the air burning everything and slashing enemies to pieces. 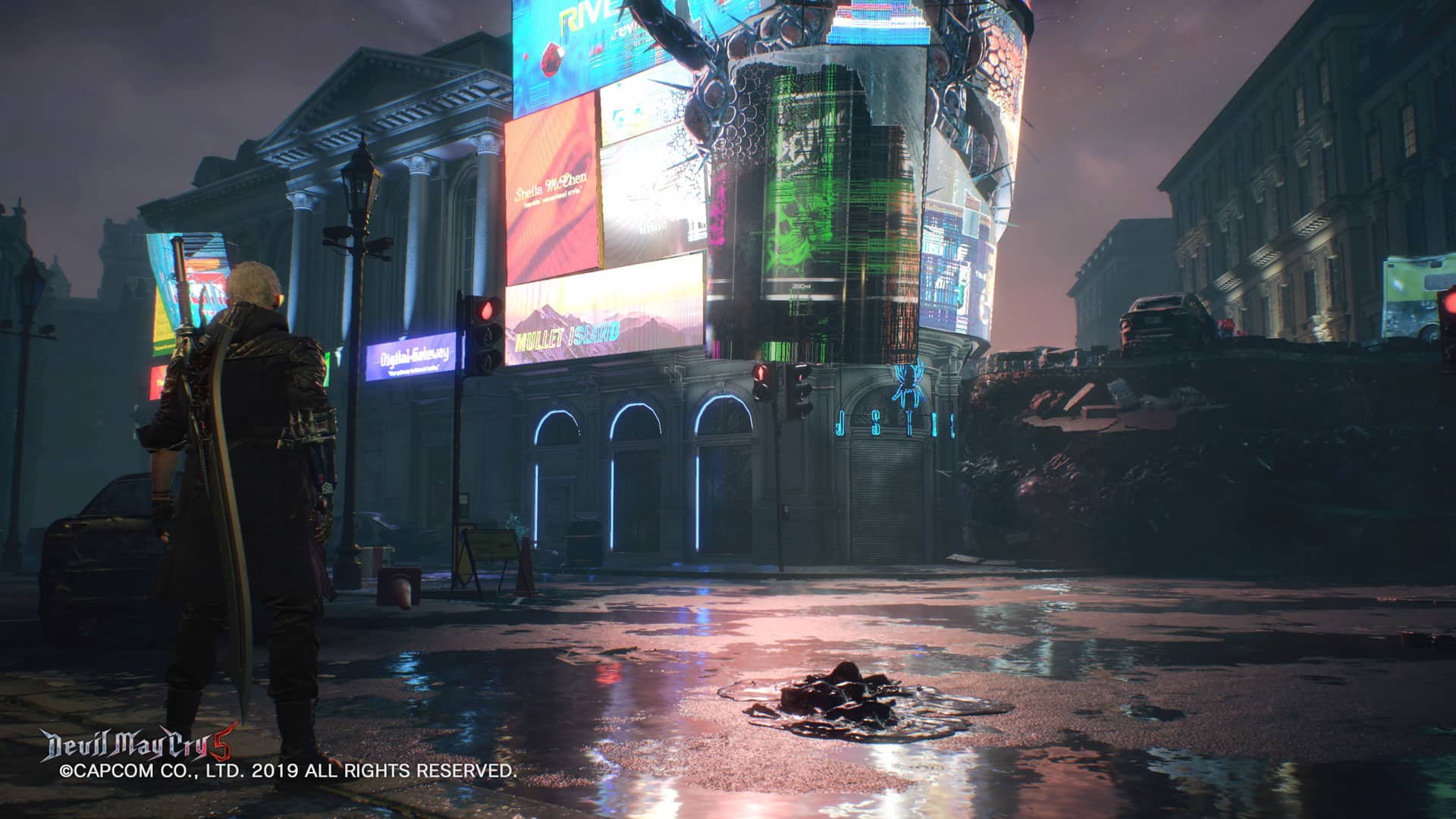 Of course, Nero then has his basic attacks and ranged weapons that too get upgraded throughout the game. By the end of Devil May Cry 5, all three playable characters grow tremendously in terms of combat power and abilities. But at the same time, each of them has a pretty unique combat approach with V being so different from Dante and Nero.

V has three demons he uses in battle. Griffon, a bird that rains down electricity from the sky and can help him double jump and glide across gaps. Shadow, a panther that morphs its body into powerful weapons like spikes and sawblades and also helps V dash and dodge, and Nightmare, a giant colossus that V can summon to help him fight. V does not do damage at all by himself, instead, he relies on his demons to do the work for him. V then jumps into battle to finish off the demons as his companions cannot deal the final blow. 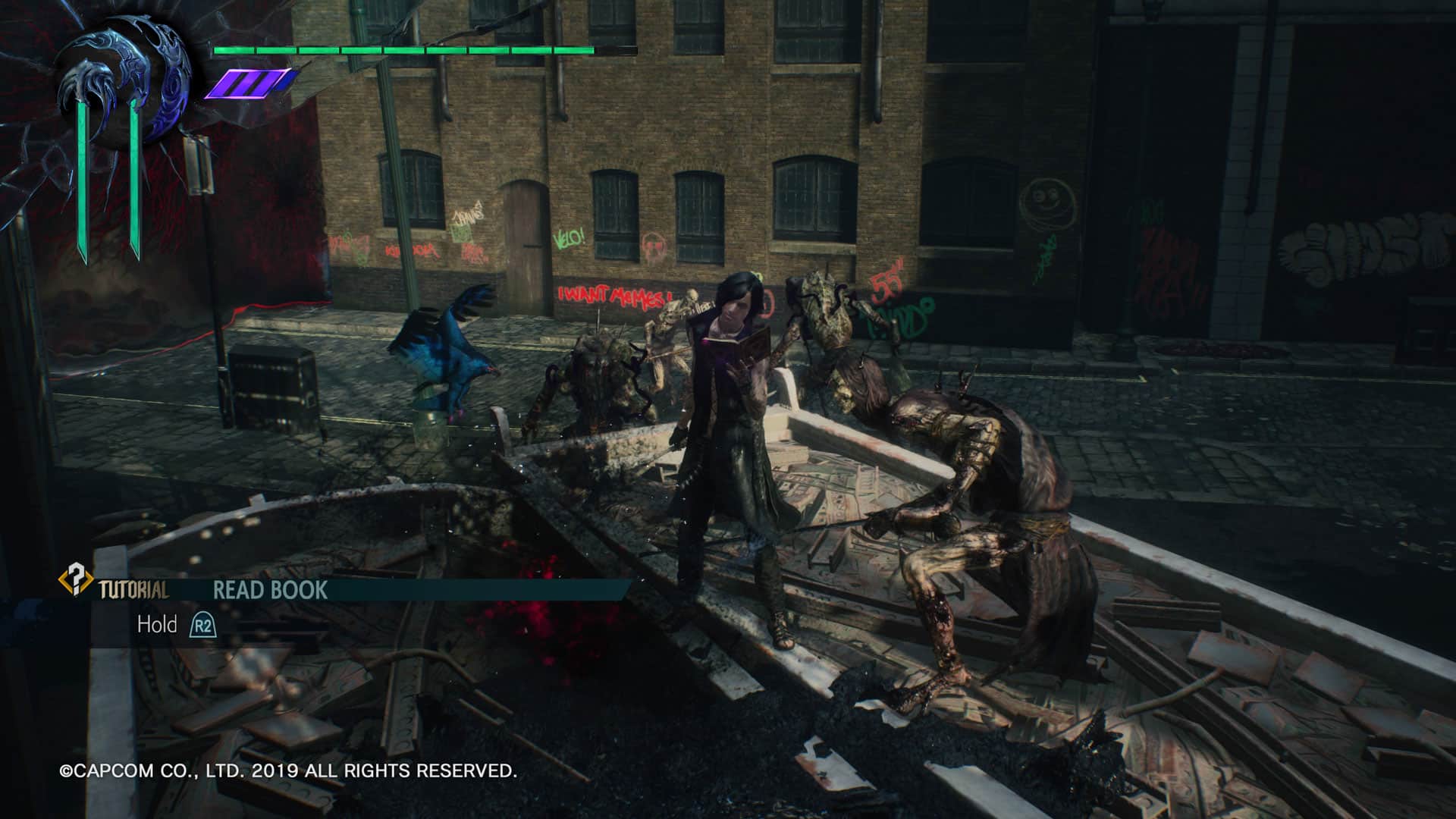 V’s approach in combat relies on fast thinking and taking into account what your demons are doing before you task V into performing a move. For example, if Griffon is helping you double jump, then he is not attacking as he cannot be in two places at once. The same goes for Shadow that helps you strafe left and right. You can either dodge attacks, or attack with him.

We then have Dante which has not changed much but we love him for that. His attack style relies heavily on his equipment and if you are a fan of the past game’s combat then he is your go-to character. He performs big hard-hitting combos while juggling demons in the air and firing rockets at them from a distance. Dante can also transform into his demon form which can refill his health and deal high damage abilities at the same time. 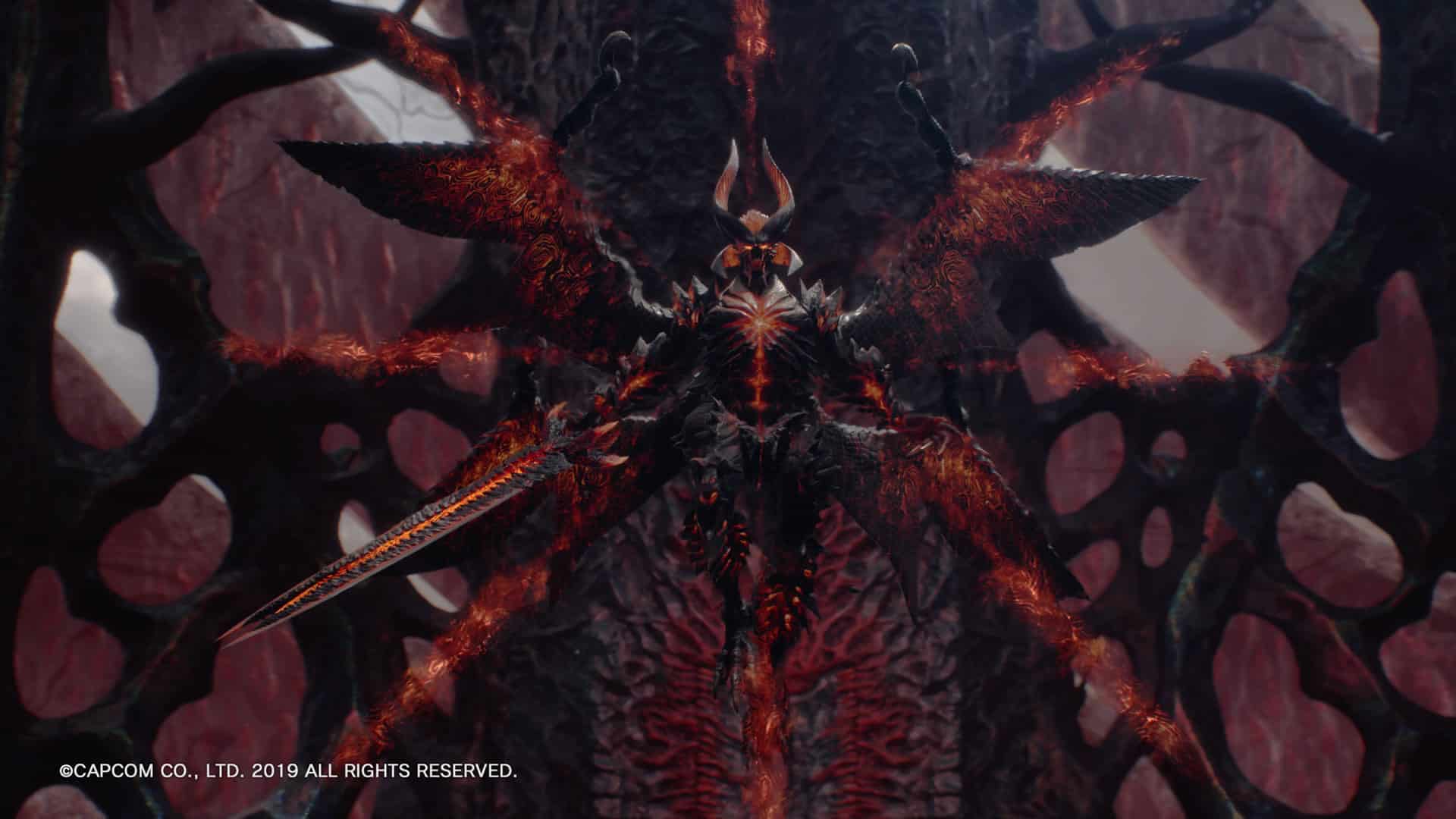 Of course, it would not be Devil May Cry without a crazy weapon and Dante’s loadouts are quite extreme. Cavaliere is a motorbike that Dante cuts in half and uses as giant buzzsaws and Dr Faust is a hat that lets him shoot your Red Orb currency at enemies. As for Lady and Trish, well they don’t do anything in the game but flaunt a bit of skin here and there. They seem like a waste, to be honest, and while their introduction is great, it would have been great to have them contribute a bit more to the overall gameplay in Devil May Cry 5. 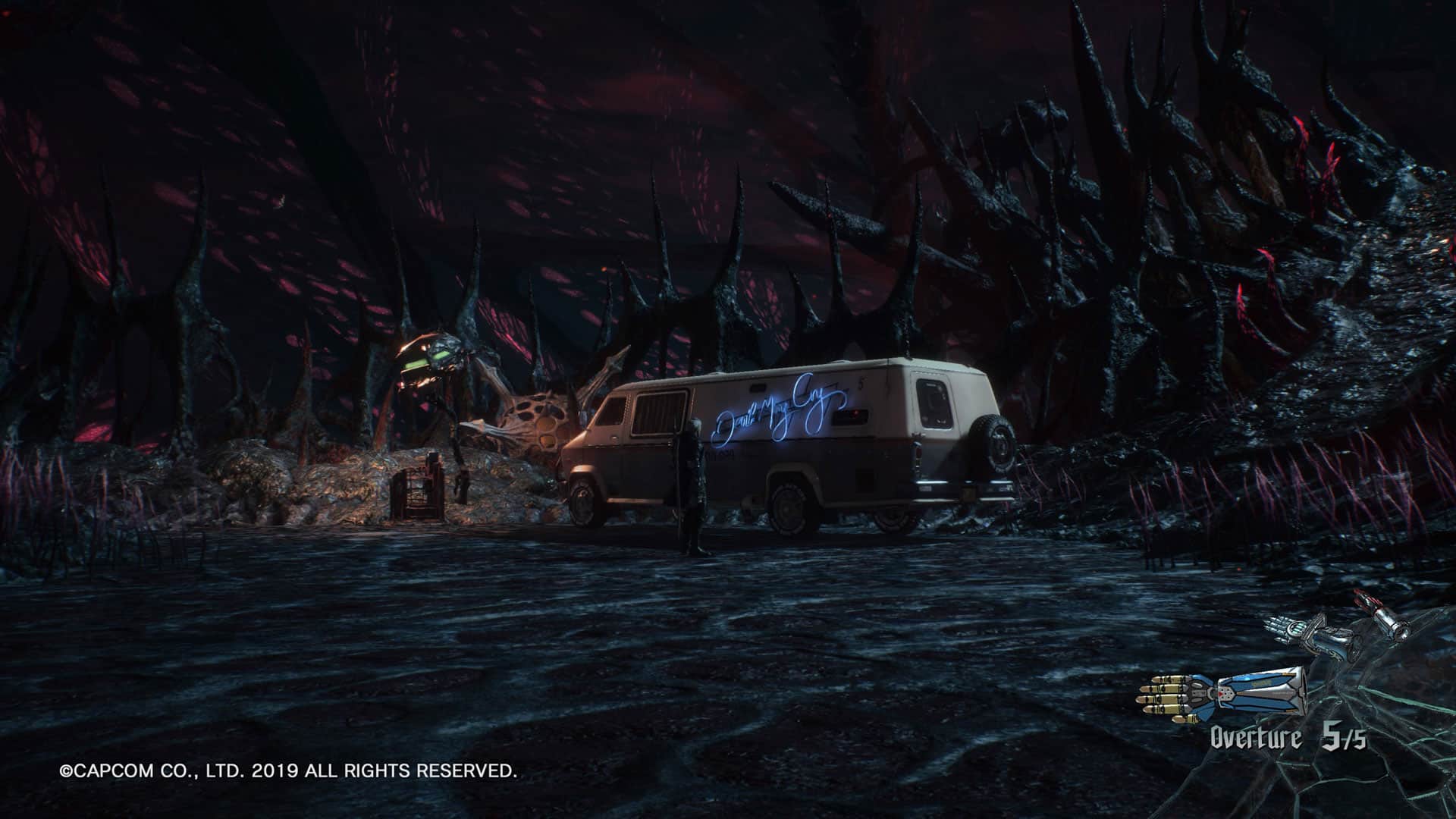 The combat in the game carries every mission through to its end. If you are not fighting a giant demon boss, you are juggling the huge variations of enemies that challenge you at every turn. The classic “barricade” combat is back which sees you enter a room and have to destroy everything in order to proceed. Enemies are fantastic and all deliver a diverse combat approach. They also have a very similar look and feel which resonates with the game’s modern-day aesthetic.

The Behemoth is a giant lizard-like monster that bashed into everything it sees. Nobody has a load of health and spawns giant eyeballs that explode near you. Death Scissors are freakishly-looking ghosts with pale white masks that wield scissors and try to chop you up and the Fury is a red lizard with crazy teleportation skills. 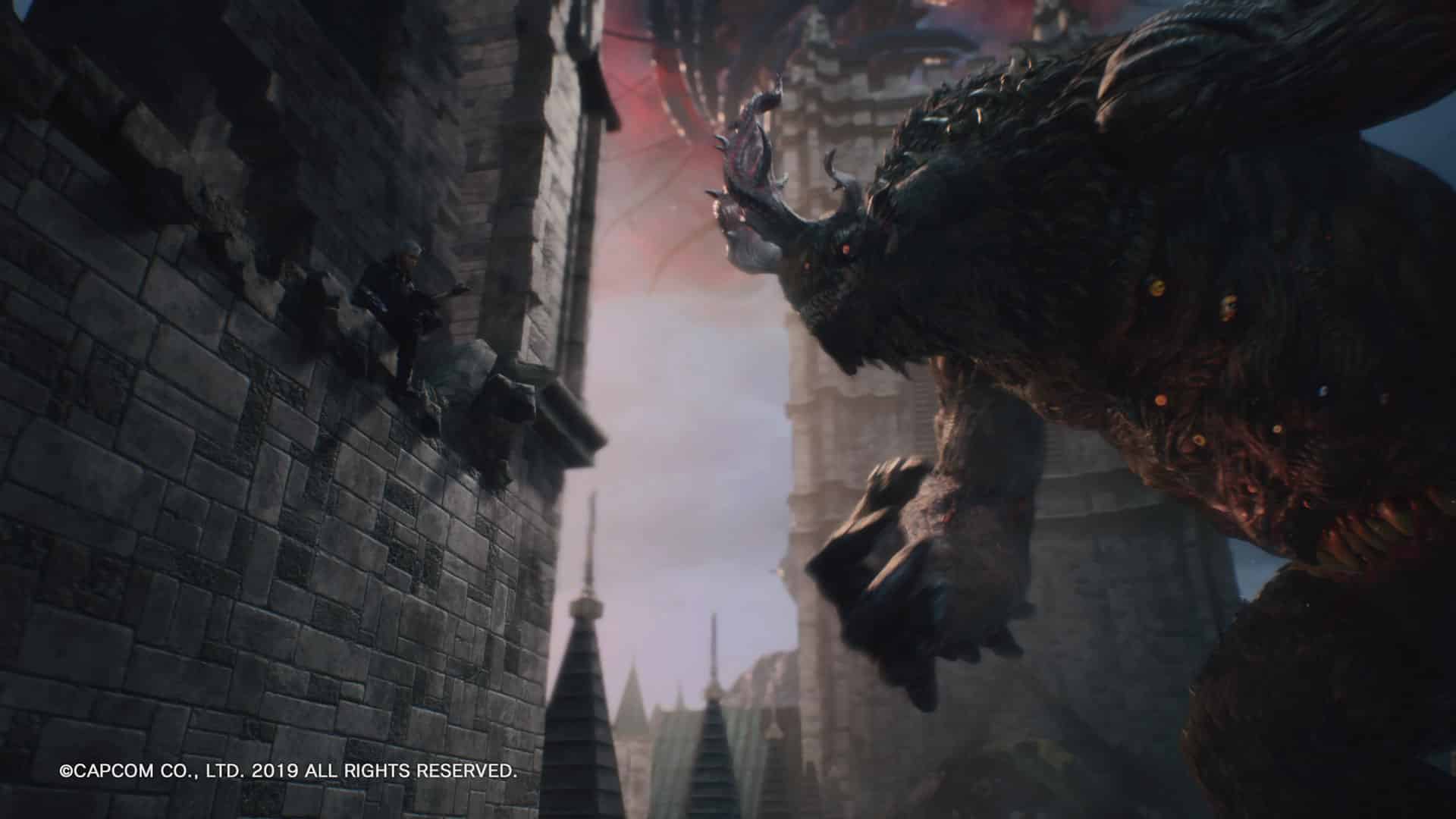 The sheer variety of enemy types in the game delivers a refreshing take on combat every time you enter one of these arena-like sections. Some of them can be cheesed but the difficulty ramps up near the midway point where you sigh, breath in and tell yourself “not these guys again”. Even if some of these enemies are used a handful of times, they are all fun to fight and the three playable characters and fighting styles give you a different way to fight them each time. 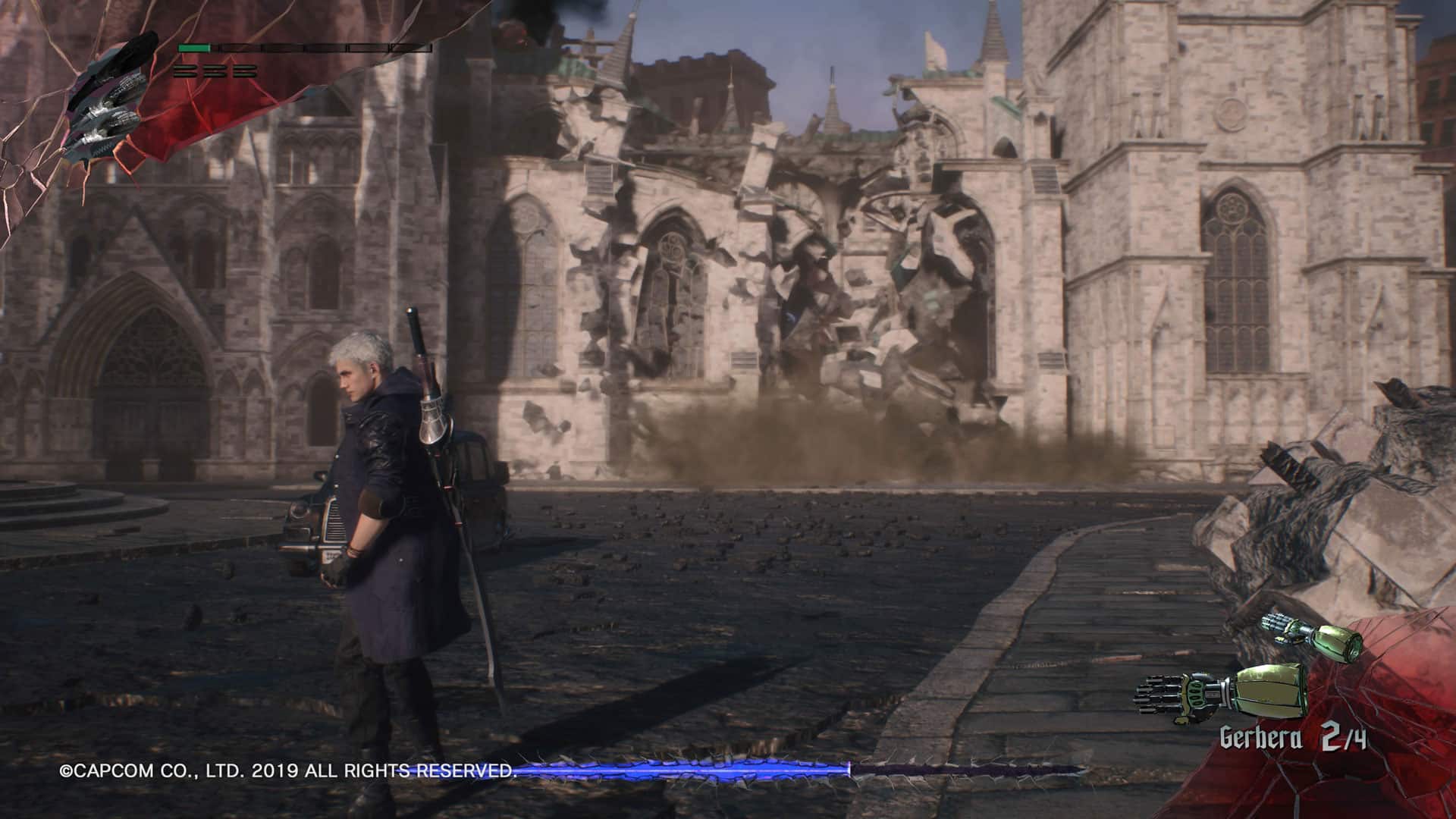 We then have the boss fights. Devil May Cry 5 starts off really strong with these with the first boss, the Goliath delivering one of the best fights I have experienced in years. You fight him atop a cathedral, you deal damage, he bashes the roof in and proceeds to blast a giant wave of fire inside the cathedral that forces you to run out of the building. As you flee you can see the building collapse as he destroys it inside before leaping out of the rumble to continue chasing you down. It is just perfection. My eyes and mouth wide open as I could not believe that this level of staged detail welcomed me to the game. 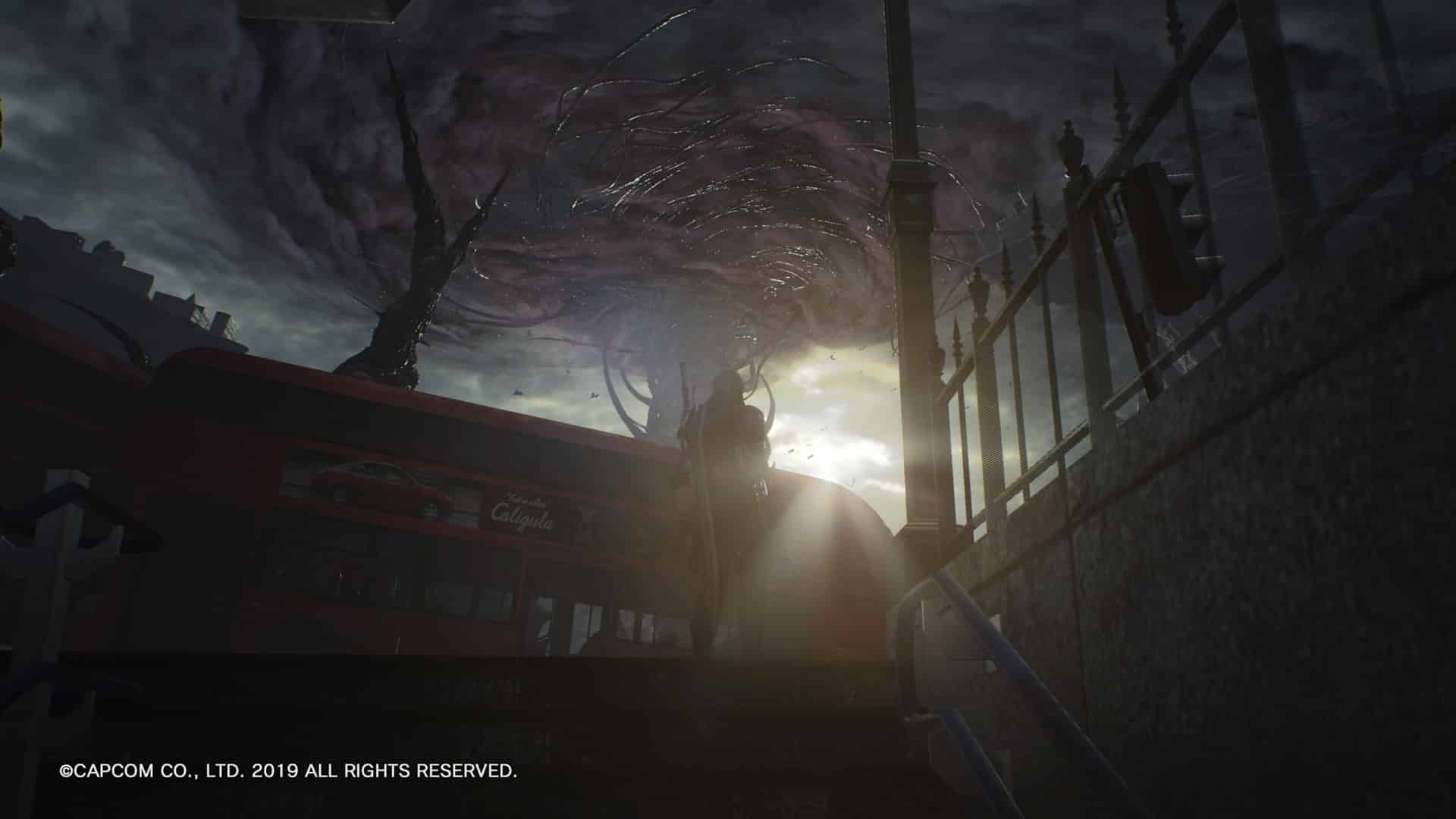 However, as the Goliath starts off strong, the rest of the fights just lack that magic. That is to say, they are still action-packed but they all are basic arena-like fights as you run in a circle dodging and dealing damage whenever you find an opening. Pity really as the small detail of the destruction of the cathedral added a whole dimension to the fight.

Devil May Cry 5 takes you across various missions with different things to see and do across them all. Exploration is key as you find those hidden blue orbs to upgrade your health bar and track down the hidden missions that task you to do a specific fight or run in a specific way to be rewarded with orbs. 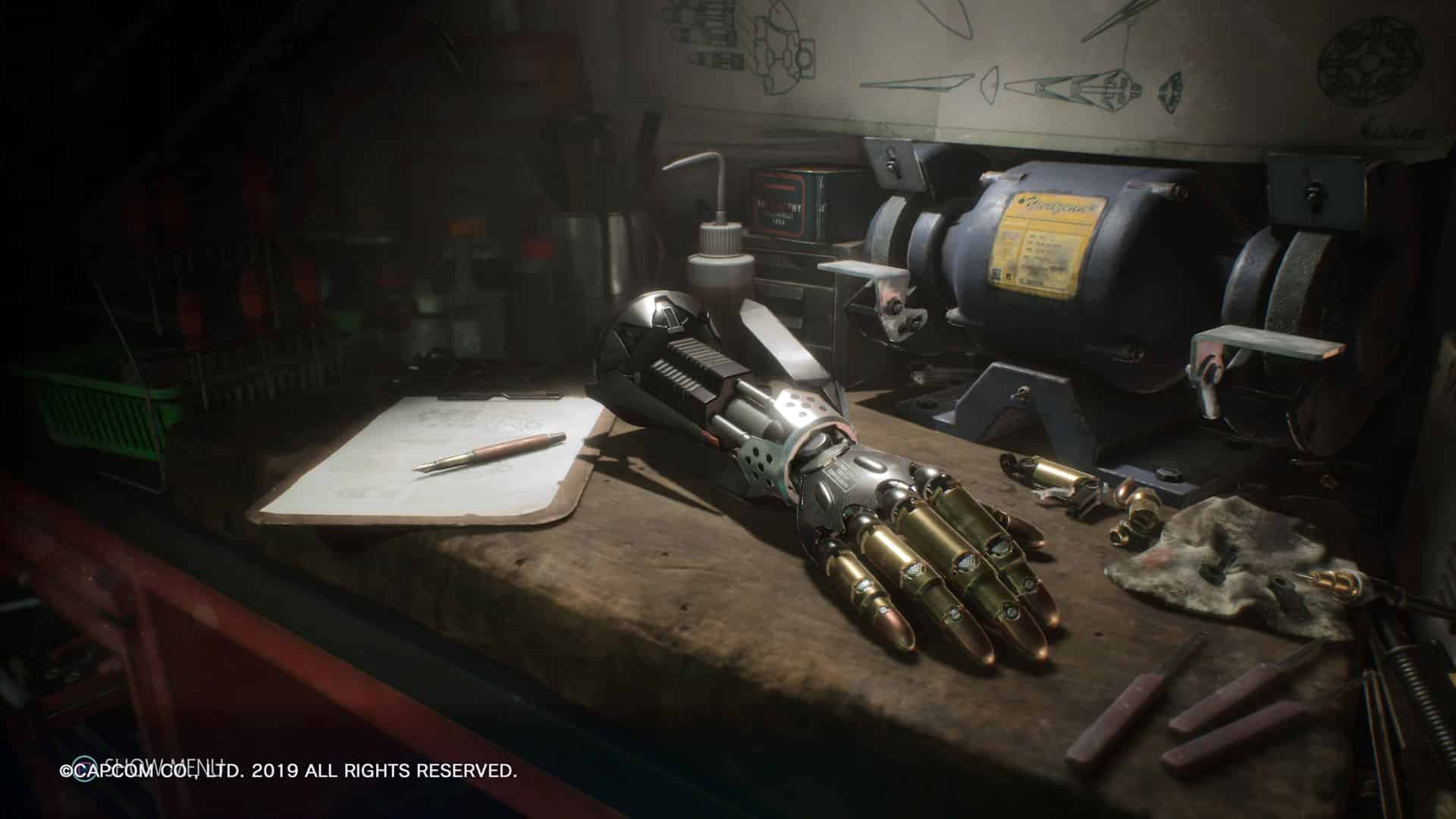 But it is not all glorious blood and gore as the game’s pace and lack of environmental variety bring a giant halt to the experience. From mission 12, you enter the giant tree and everything starts to look the same. The environments are boring and reused and much of the missions sees you explore the same area, but a different path with a different character. I just wanted to put this on fast forward as not even the combat could help add excitement to the dull missions that did not even add a boss fight in for variety. The game has some serious pacing issues for around five missions where things take a slow and boring turn.

Devil May Cry 5 has all the personality you love from the series. Characters, voice work and visuals are top-notch and the RE Engine delivers spectacular visuals, superb characters and great use of HDR which brings the dark and twisted locations to life. The photo-realistic look in Devil May Cry 5 is simply phenomenal and runs like a dream at 60FPS. 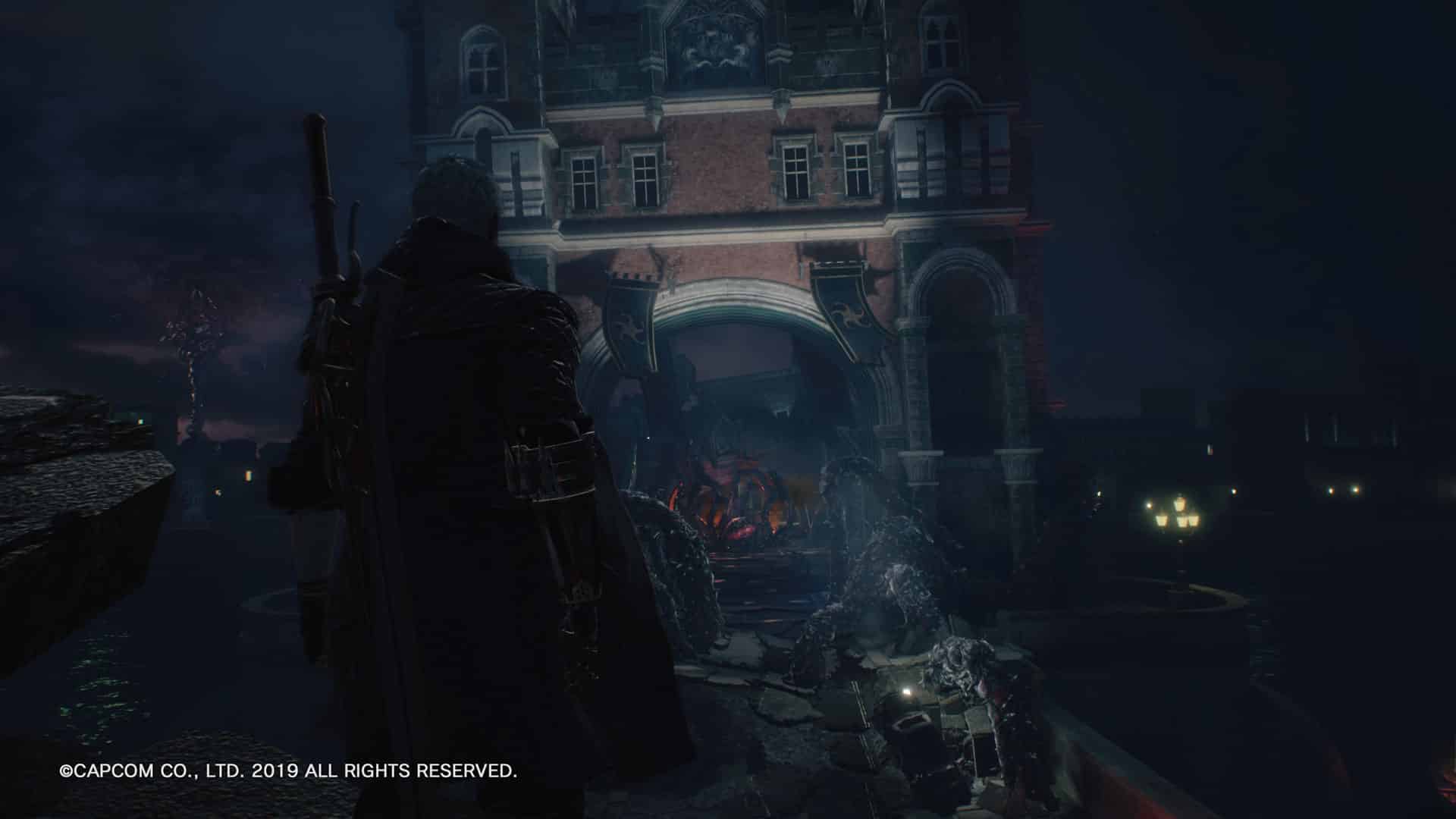 Devil May Cry 5 proves that the best thing Capcom ever did was create the RE Engine. This is the second game this year to deliver an experience worth every cent. Its action-packed gameplay, fantastic story and gorgeous visuals create the best Devil May Cry in the series and you don’t want to miss it. Newcomers may find it hard to latch onto what is going on, but series veterans will soak all of it up.