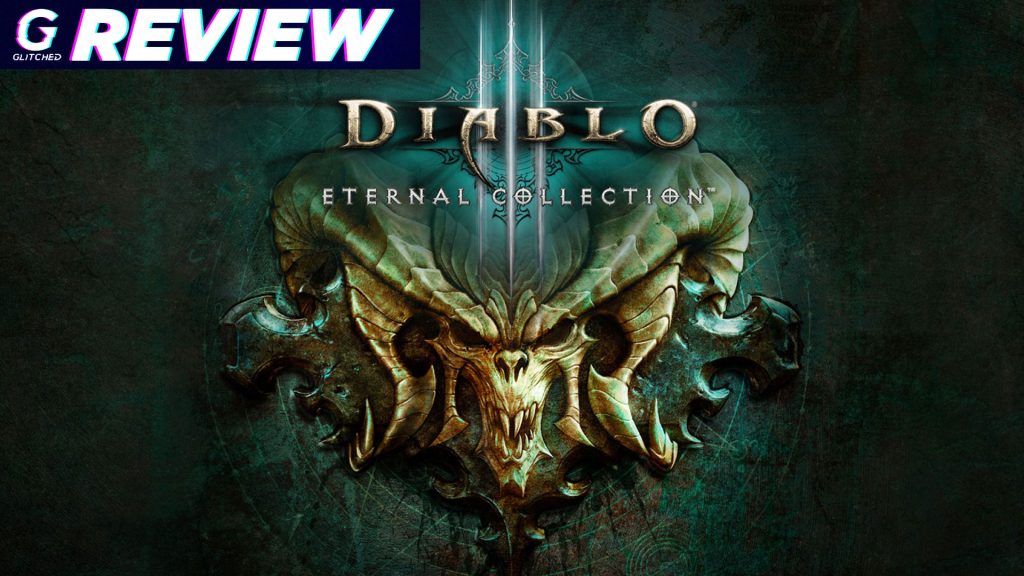 Diablo 3 has arrived on the Nintendo Switch and for those want to be on-the-go terror slaying Nephalems, this one is for you.

Diablo 3: Eternal Collection contains all previous DLC entries in one convenient place. This includes the Reaper of Souls DLC, which saw players go head to head with the angel of death Malthael, as well as the Necromancer DLC pack which contains new areas, enemies and one of the most beloved Diablo classes, the Necromancer. 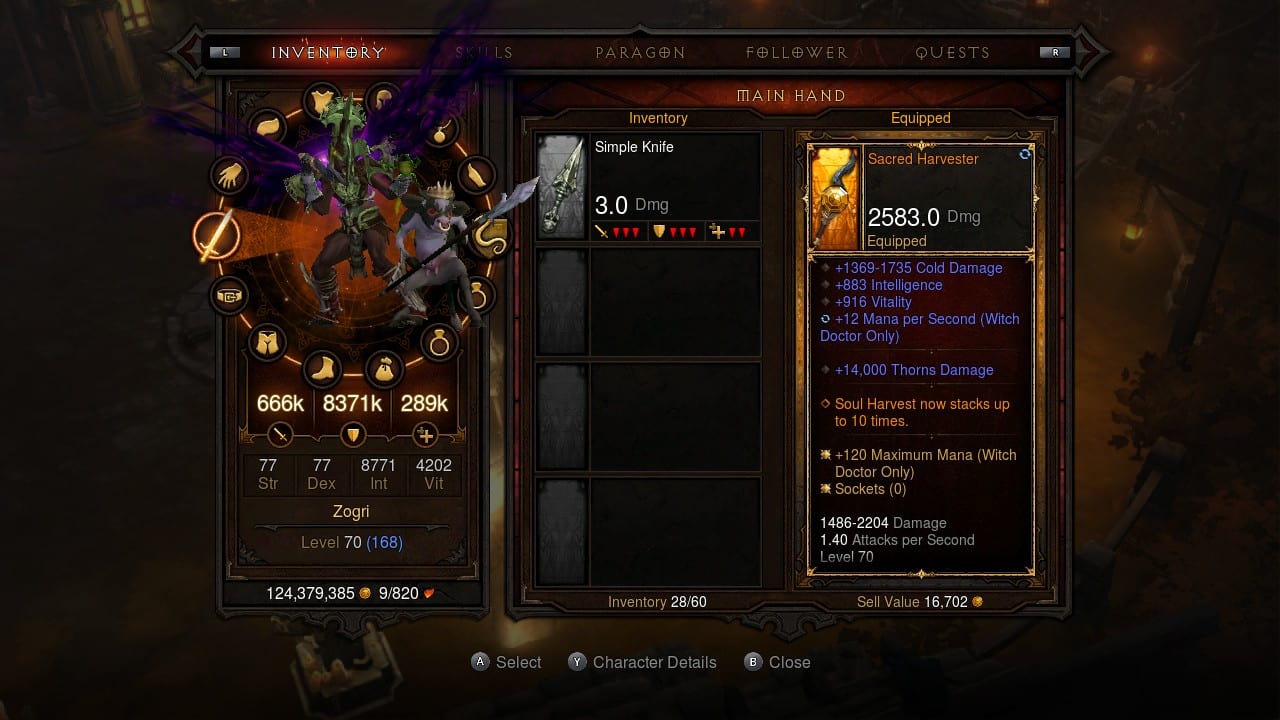 To a newbie of the Diablo series looking to play it casually wherever they are, the game certainly fills that role on the Nintendo Switch, but how exactly does it stack up against the already established PC and console versions? For starters, if you’re a veteran player coming to the Nintendo Switch you’re not forced to sit through the story, which can be tedious after five or six playthroughs, instead you can hop straight into Adventure Mode and begin building the ultimate demon-slaying machine. The game also contains all the other aspects that its console and PC counterparts have. Rifts, greater rifts, bounties, Greed Realm and basically everything else too. The sometimes-exciting seasons are also available on the Switch where you can now compete with other Switch players for those infamous leaderboard positions. 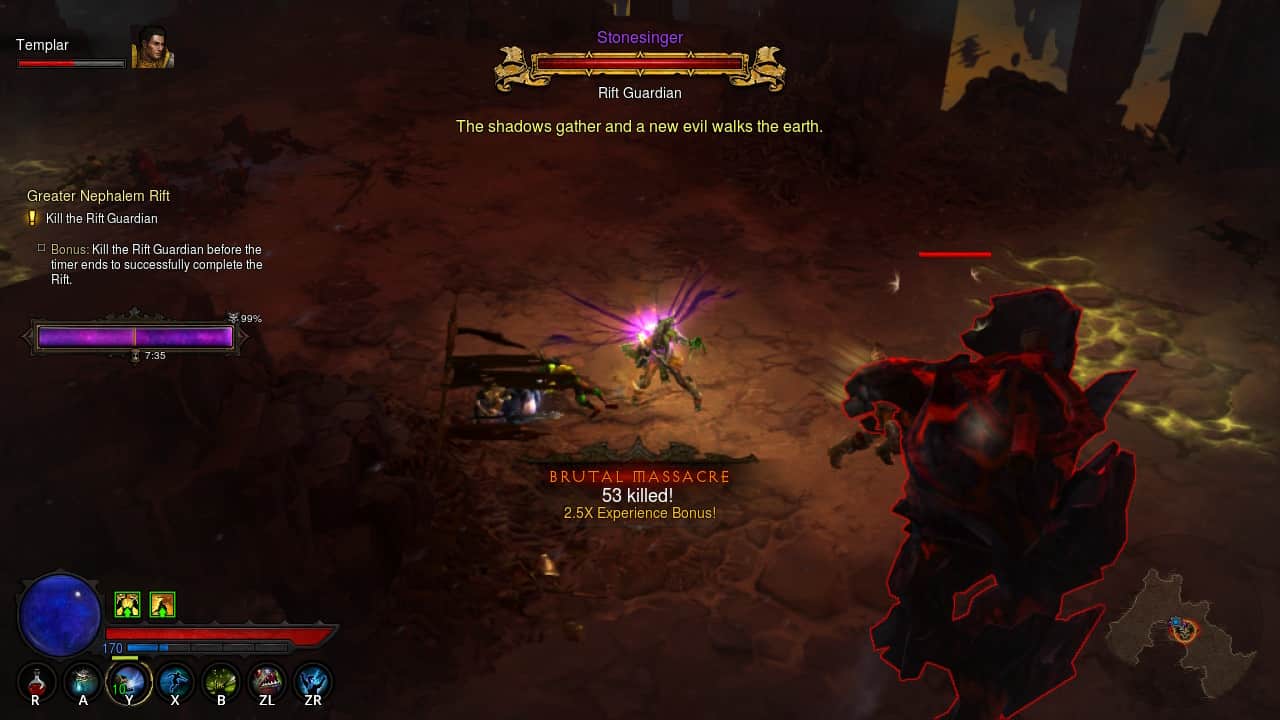 I must say that starting the game legitimately fresh and leaving my tens of thousands of crafting materials behind was refreshing at first but soon became tedious when I had to start farming bounty caches with barely any good gear. The migration from an already-established save, with hundreds of hours, was certainly difficult and not something I can entirely recommend unless you are into grinding Diablo that much. The Nintendo Switch does surprisingly well at running the game. The visuals are not anything to gawk at, but for a game initially released in 2012, it looks good. One major issue I had when playing was the tremendous load times. It would sometimes feel like an eternity while I sat and watched those red diamonds glow at the bottom of the screen, but for a handheld version of such a large game, it isn’t all that bad. 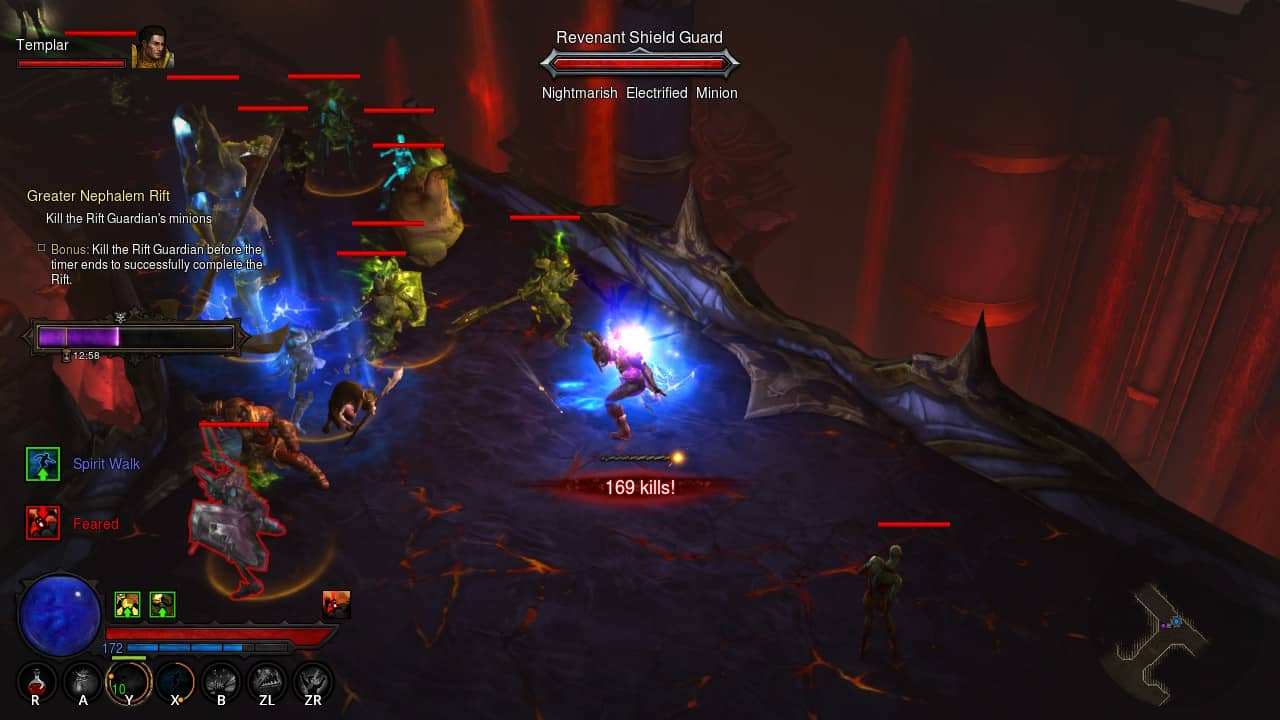 It runs smoothly in high-density situations such as Nephalem Rifts or the higher level Greater Rifts and overall I was impressed with the Switch when it came to running Diablo 3, no extreme frame drops, not input lag and some respectable visuals. The game runs at 60 FPS on both docked and handheld mode with it clocking 720P when handheld and 1080P while docked. While it maintains great a frame rate most of the time, the small framerate drops during intense scenes are definitely noticeable, but these drops never detriment the overall experience. 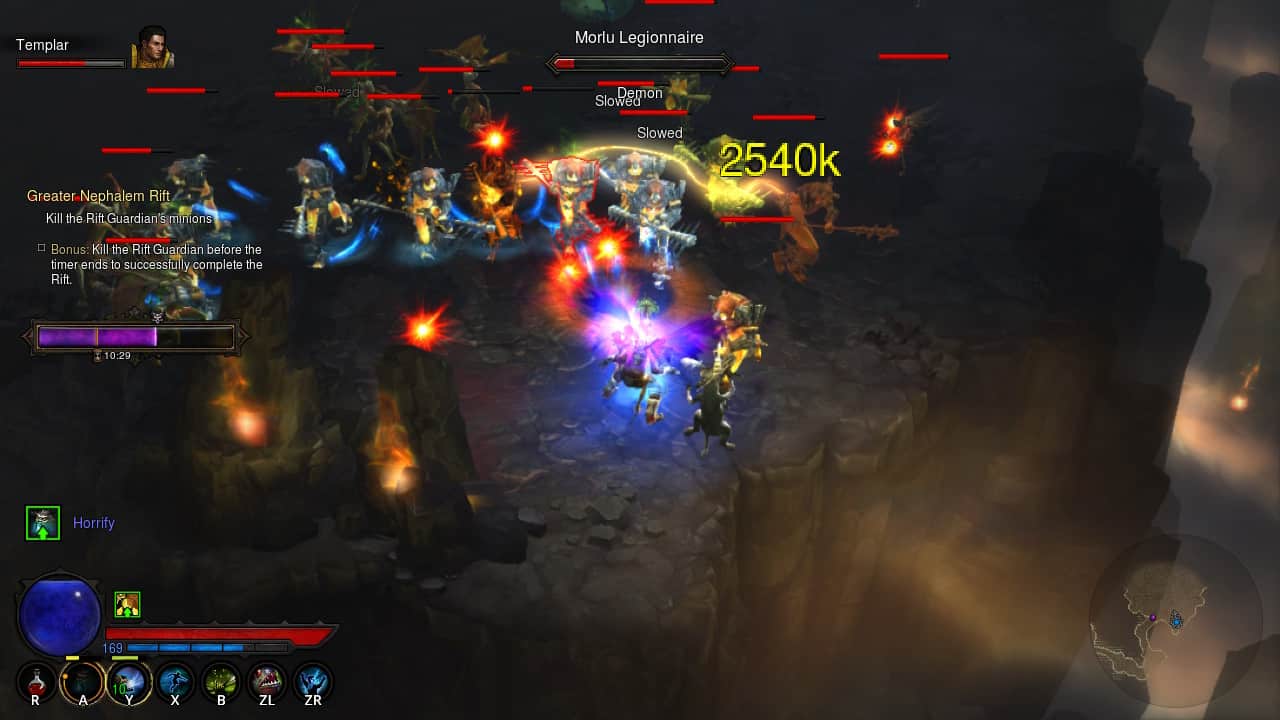 Speaking about some downgrades though, the visuals definitely experienced some. Things such as your character model on the home screen or in your menu and even items on the floor and in your hands have slightly jagged edges and are certainly noticeable. It is as if the game is running on medium to high PC settings with a few missing visual polishes such as Anisotropic Filtering and higher resolution textures. The game also features local and online multiplayer and even during these couch co-op sessions, the Switch managed to hold up pretty well even while two or three players were casting spells and blowing the demons of Hell apart. 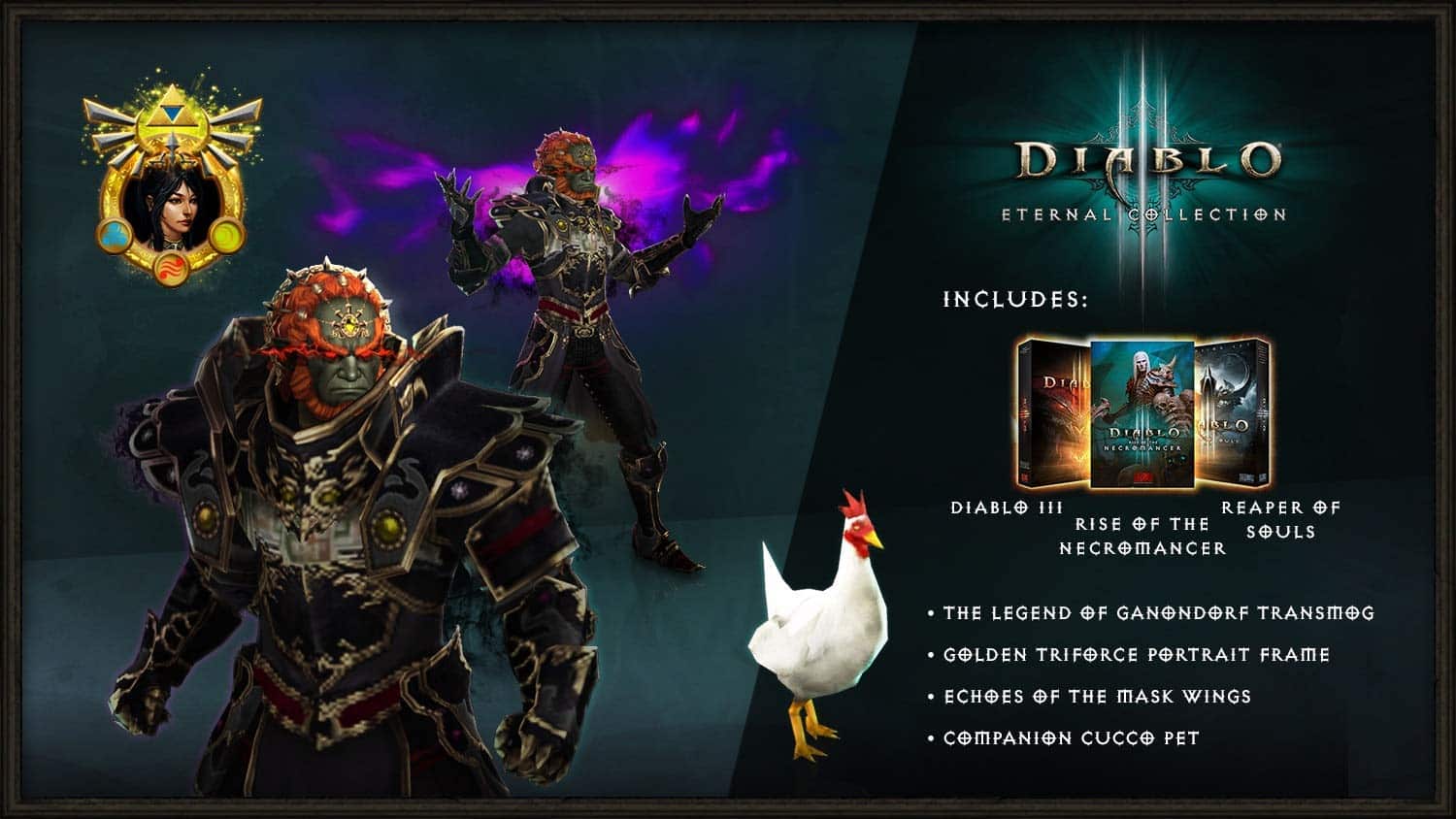 So where exactly does the Switch version of Diablo 3 falter? Besides its long load times, the game doesn’t have too much wrong with it. One could argue that it’s a bit late to be releasing the game as it’s now 6 years old, and to some extent that is true but it is Diablo on a portable gaming device so even if you played the original PC release all those years ago, this entry will feel great. If you’re feeling burnt-out from Diablo on your original platform from either too many hours or no new content, then I cannot confidently say that you would enjoy the Switch version of Diablo 3. However, if you’re new to the franchise looking to jump in, there is no better opportunity than the Switch version of Diablo 3. The game still provides the amazing action that Diablo 3 is known for and now in an even more convenient way, from the engaging story to the grindy but totally-worth-it-end-game of rifts, bounties and greater rifts, Diablo 3 on the Nintendo Switch is brilliant just as all previous releases have been.

This review was based on a review code sent to us by Blizzard.