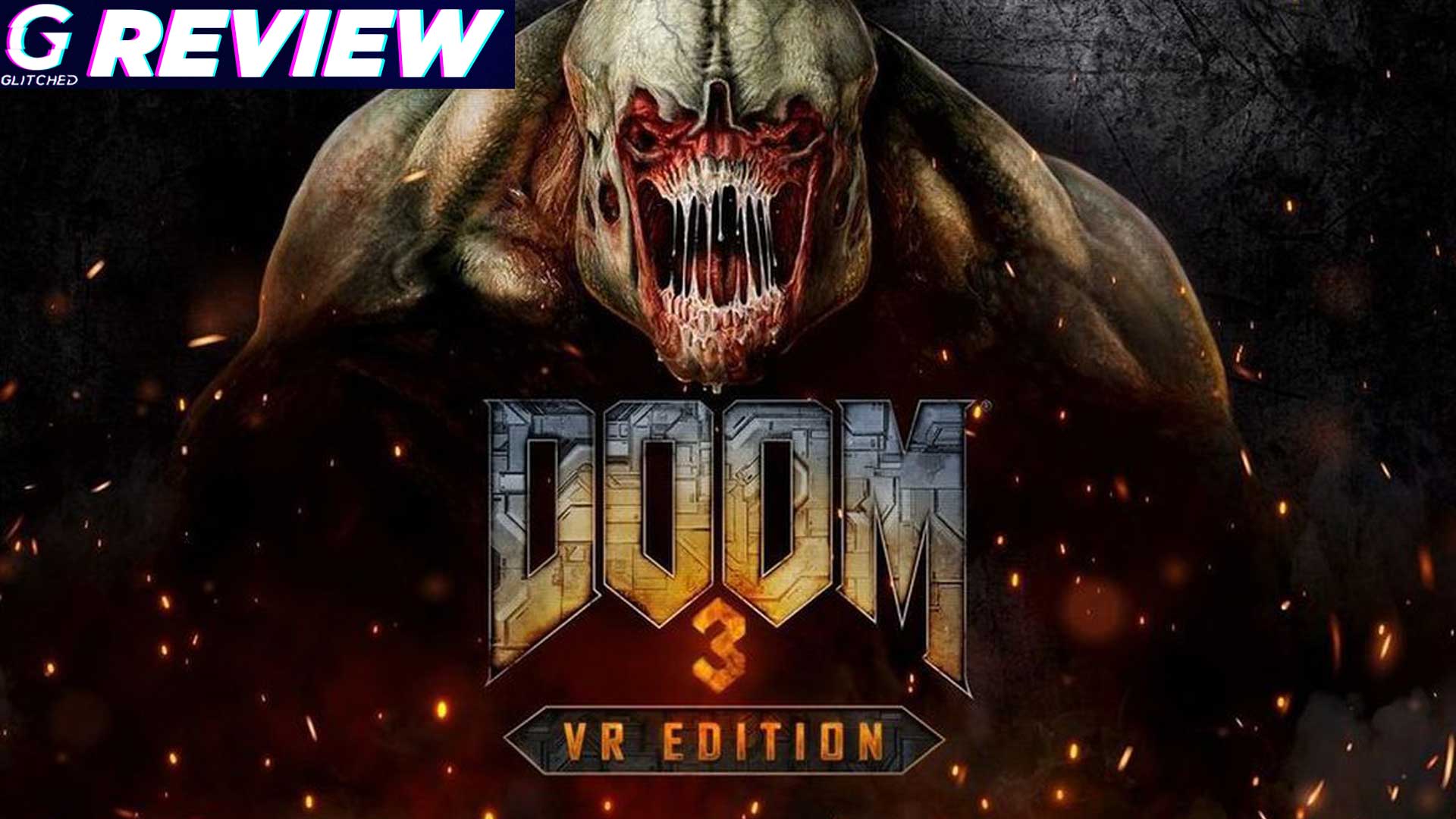 It is hard to believe that the DOOM we play these days is very different from the Doom 3 from back in the day. Instead of the fast-paced combat we enjoy in DOOM Eternal, Doom 3 was a horror game that used the shadows and a creepy space settlement to freak the life out of players. I remember it quite fondly and had countless hours playing the multiplayer at LAN parties. Bethesda thought releasing Doom 3 VR Edition would be a way to rekindle that horror experience and they were correct for the most part.

Doom 3 VR Edition is a full VR experience that is exactly what you think it is – Doom 3 and all of its DLC played in virtual reality. Most of the time the game feels like a VR mod as the cinematics played out on a cinema screen in front of me and only gameplay transformed the experience in VR. But it feels like a refined VR mod at least. Give or take a few rough edges. 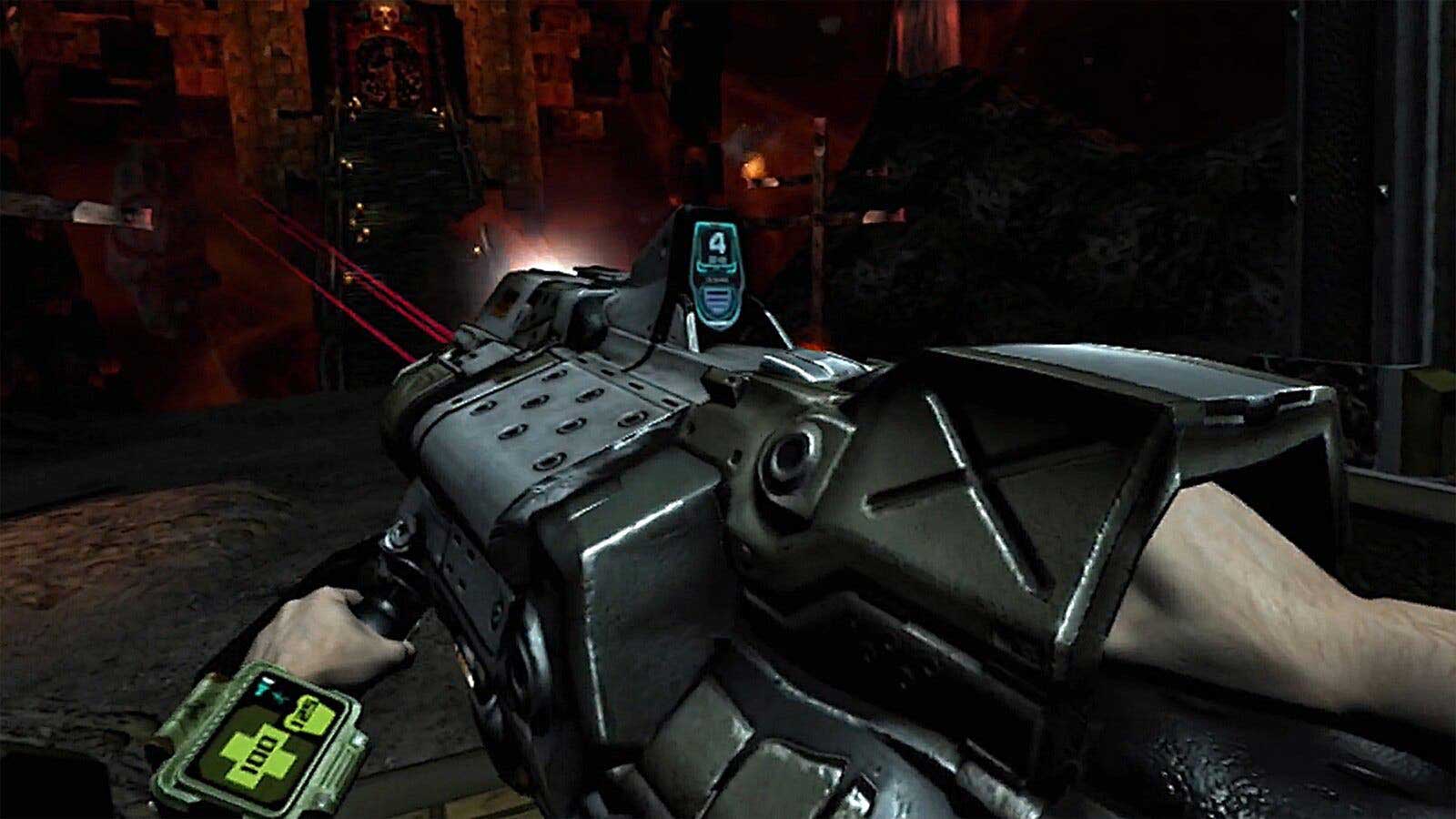 Being a VR port, the game has not been touched visually. It looks great overall but it is hard to ignore its dated design. Character faces look like clay and most objects have a clear seam in the middle from the textures mapping but it does a great job delivering a chilling atmosphere. This is brought to life in VR and while I have played Doom three about a dozen times already and the game no longer scares me, this is definitely the best way to play it… if you can put up with the VR that is.

Doom 3 also marks the first time I played PS VR on my PS5 (using the dongle that I arranged from a reader because Sony has still not sent mine) and the experience was great. I noticed some sharper text but that is about it. We need PS VR 2 now because the original headset has officially hit that “old tech” category. 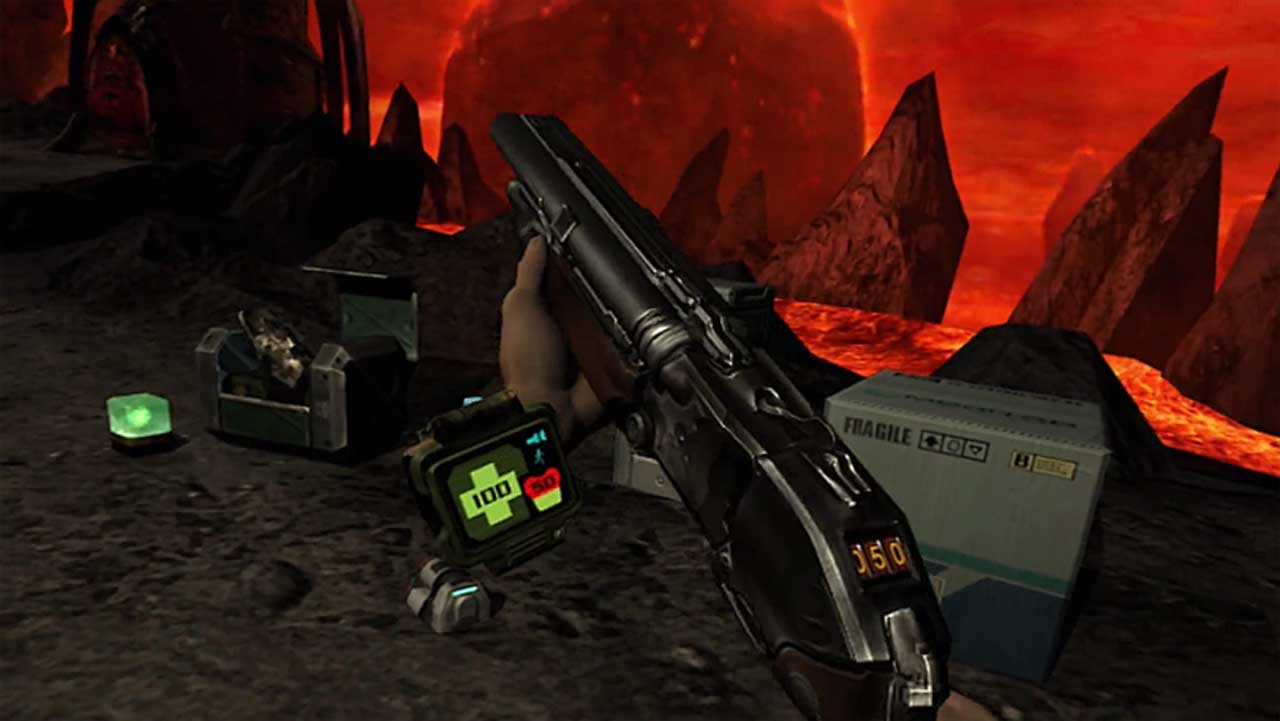 Doom 3 VR Edition support a DualShock 4 and the Aim Controller. If you are using the DualShock 4, then aiming is done with the controller by moving it around. On the other hand, the Aim Controller maps the gun to the device so I could aim down sights by bringing it closer to my face and rotating it by moving it in the air. It is the ideal way to play the game because you feel like the Rock while running through the corridors and shooting enemies with a shotgun in one hand.

I was impressed by both controller options here. The best way to play is the Aim Controller but the DualShock 4 felt good too and players who did not invest in the Aim Controller can enjoy the immersion a lot more than just using the analogue sticks. Basically, your hands are the DualShock 4 controller and moving it around moves the gun around. Even when I had my hands on my lap, I could easily aim around and shoot without having to lift my arms in the air. This stopped my arms from getting tired by holding the controller up all the time. 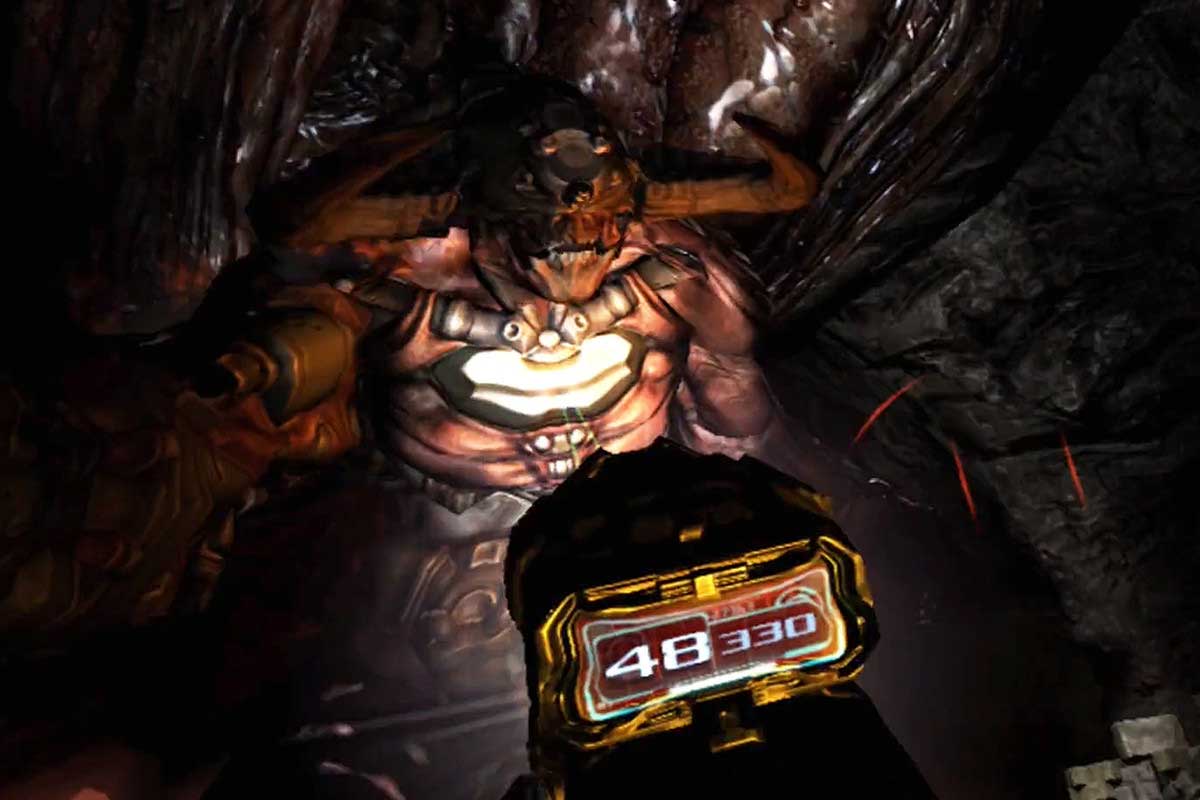 Moving around in Doom 3 VR Edition is easy enough. The game includes two ways to experience a camera rotation. One is a snap angle movement that blacks the screen out for a split second to prevent motion sickness. You can also disable this completely and move the camera left and right with a smooth motion. Whatever your playstyle, it should work for you. I started off with the camera snap and disabled it after a while. I found the smooth movements easier on my eyes.

Doom 3 VR Edition does have some rough moments in gameplay. The game includes an autosave feature that literally pops up at random times and stops the game in its tracks. No matter what you are doing, the game will freeze while it saves. Surely this could have been done while being able to still move through an area? The cinematics playing on a flat screen in front of me also irritated the gameplay. Some of the scariest moments in the Doom 3 VR Edition are during these cinematics and not being able to look around and witness them kinda bummed me out. 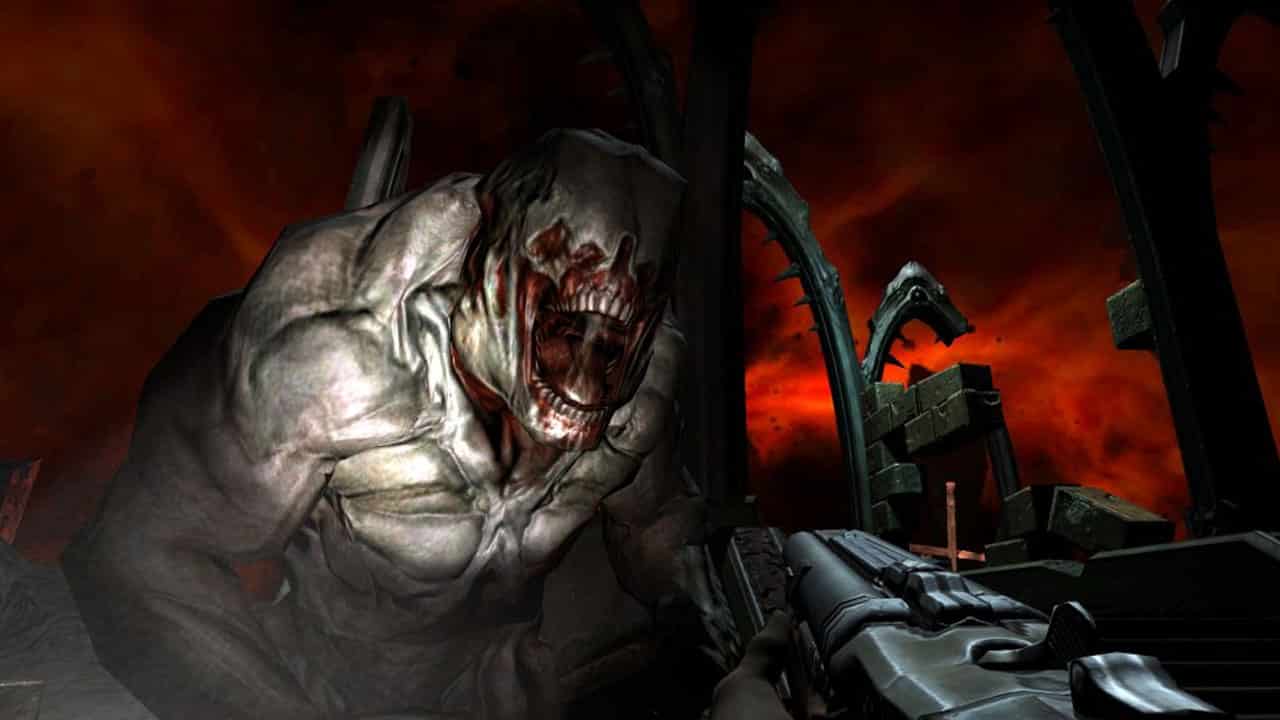 Doom 3 VR Edition also includes some new tweaks like a HUD that is now strapped to your wrist. Checking health and armour felt great. Then there are the guns that come to life like never before. The VR gives you the realism of holding a massive mini-gun in your hands and mowing down enemies as they race towards you. Doom 3 VR Edition shines the brightness during these moments. It also helps that the game is the full Doom 3 experience so if you never played the Resurrection of Evil expansion, then you will love this package.

Doom 3 VR Edition is fun and easy to master. The VR works and I struggled to find fault in the tracking and gameplay no matter the controller I used. The 2D cinematics let me down but the gameplay made up for it. Still, it is a dated game already so you need to really want to play this to strap on a headset and experience it again.

PrevPreviousWhy Deathloop Should Definitely Be On Your Radar
NextAbandoned, A Cinematic Survival Sim Announced Exclusively For PS5Next