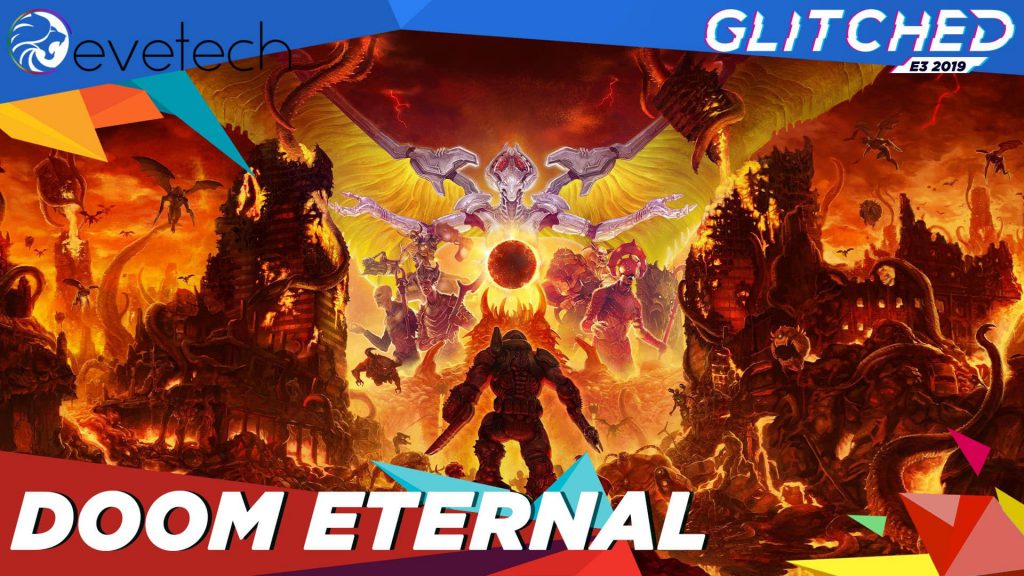 At E3 2019 I was able to sit down with Bethesda’s upcoming DOOM Eternal. I walked away pleasantly surprised. Bethesda has taken a very different approach with DOOM Eternal by focusing on all the “arcady” features that made the reboot so great and improving not only the exploration features but also the overall combat. From the moment I started moving the camera and firing my gun, it was clear I was playing a DOOM game and it was as fast and intense as ever with more blood than I could ever ask for.

One drastic change to the combat is the new suit abilities that you have access to. The E3 demo featured a flamethrower that burnt enemies alive and left them stunned for me to punch and rip in half, rewarding me with armour. The entire resource system relies on you focusing on killing an enemy in a specific way in order to obtain health, armour and other resources. Sure, you could just shoot them all but when you are low on health, glory killing a minion will help as his exploding corpse will reward you with health or armour shards depending on how you kill him. 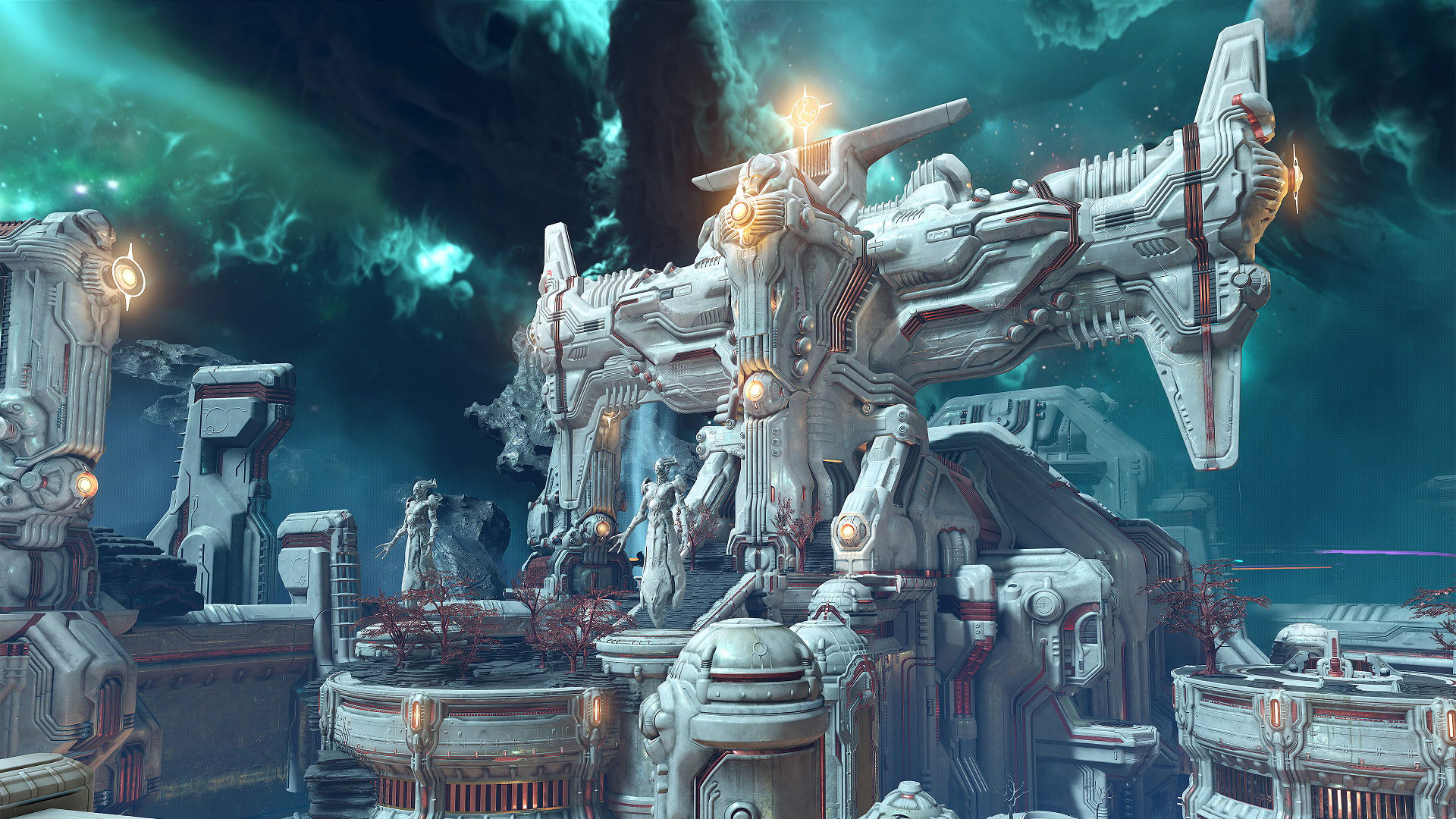 These suit abilities then go hand-in-hand with the new secondary fire system for weapons. The rocket launcher shoots a rocket and if you want, you can fire a rocket and blow it up whenever you want with the secondary weapon button. The same goes for the shotgun. This powerful double-barrel weapon blasts enemies from a distance but you can also use it as a grapple to pull yourself into enemies around the stage. Another lancer weapon fired a crossbow-like bolt, or I could hold it down to charge a powerful explosive shot that stuck to the enemy and exploded after a few seconds.

It works and the layered weapon system and new suit abilities compliment each other quite well. It is both super fun to play and also watch as you jump about the stage, leaping into enemies, blowing them to pieces all while doing it like quite a badass. “Complimenting” is one thing but the combination of all the wide variety of guns and systems in place is a whole other story. It all comes together extremely well when I approached enemies with the right weapon at the right time with the right suit ability. 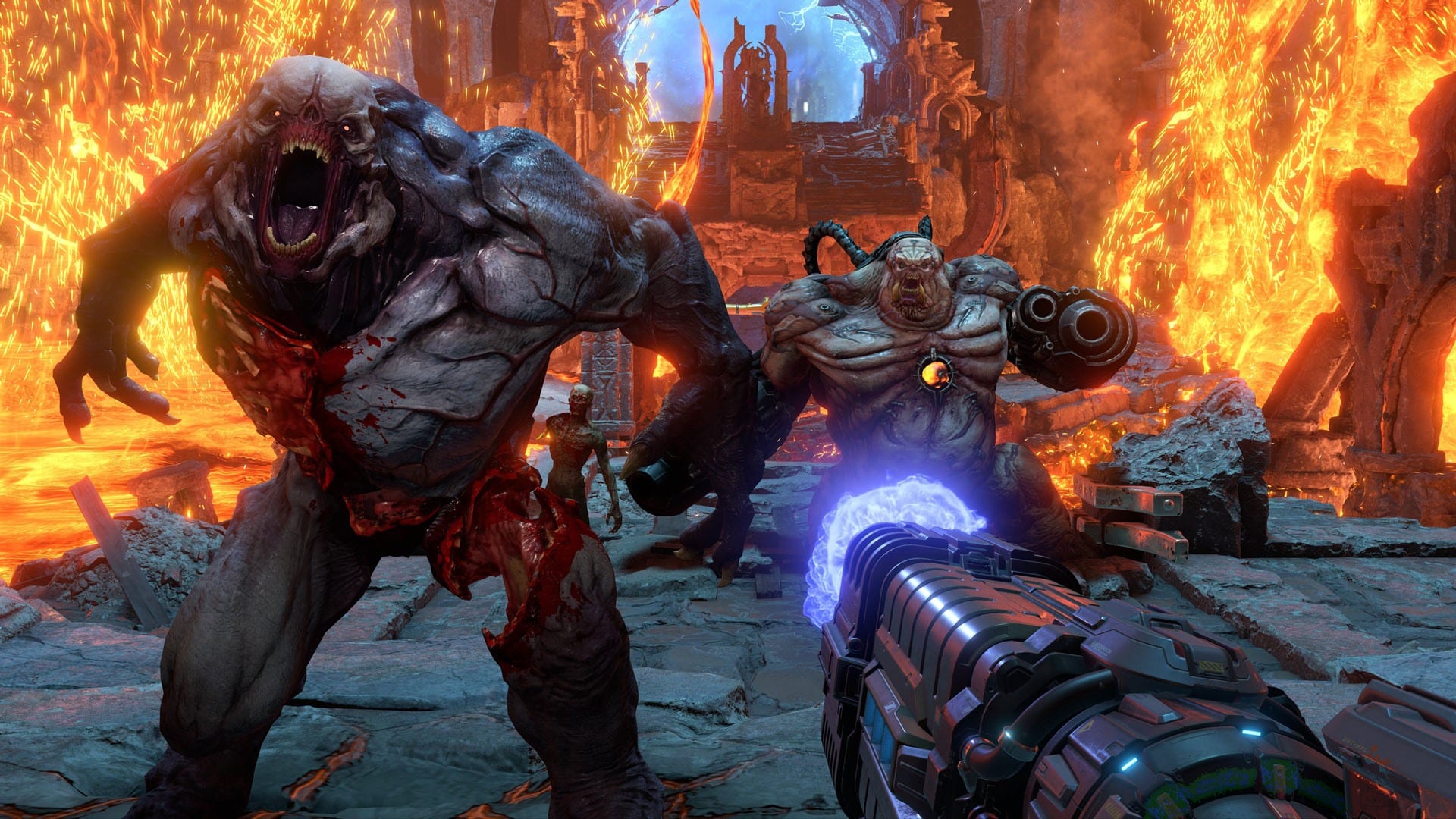 That is to say, DOOM Eternal is tough as nails. I died a couple of times while trying to master all the systems in place. There was always an enemy firing at me from all directions. Be it a shotgun freak in the distance on a platform, a zombie slashing my back or a floating head shooting fireballs at me. While running, grappling, dodging, reloading, burning enemies and picking up health and ammo, everyone was trying to kill me. I never felt like a god but at the same time, the challenge was enough for me to sit back and be like “wow, that was a close call”. 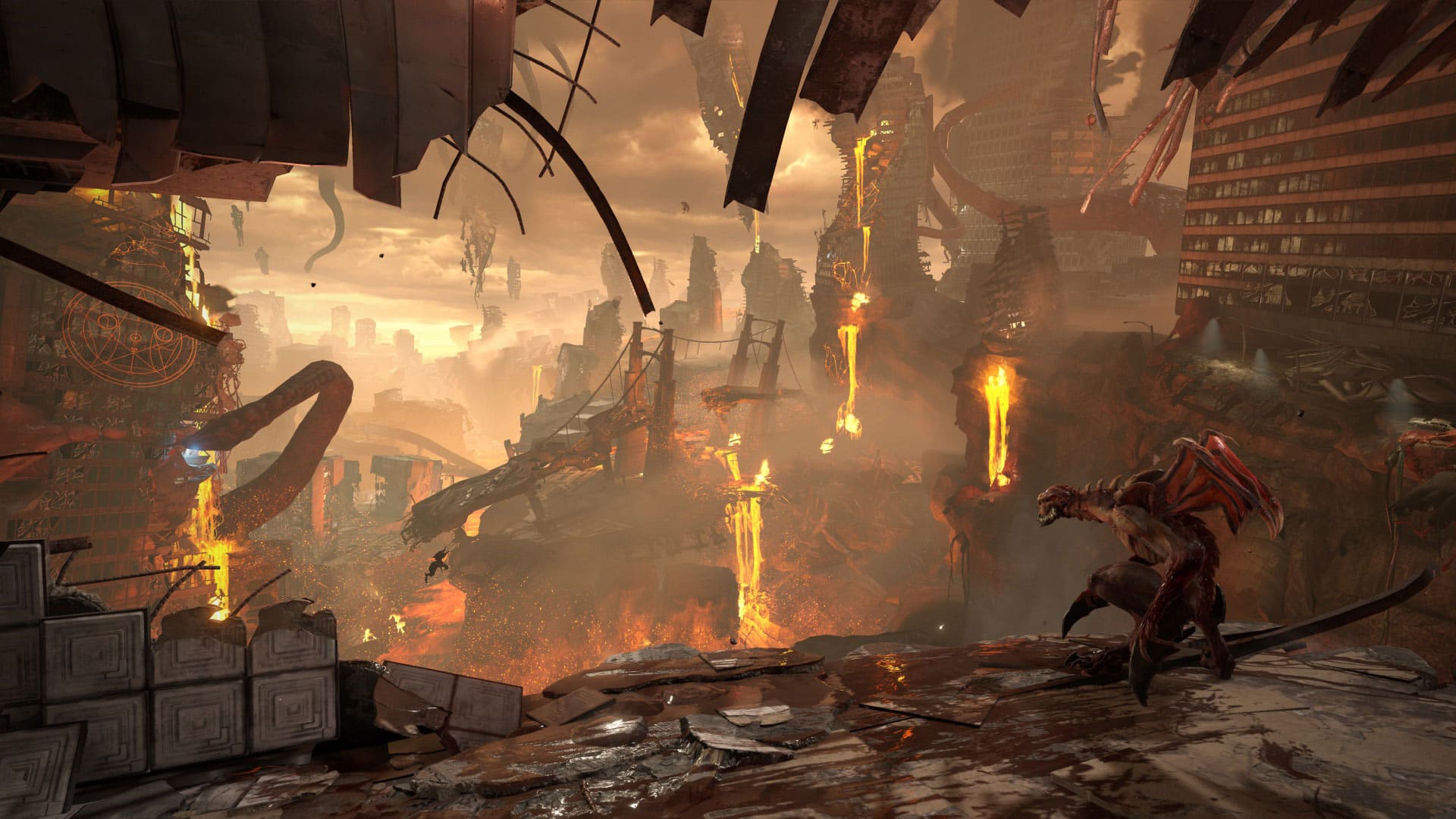 Enemy variety has also seen some changes and these enemies are dynamic too. I am no professional at the names but DOOM Eternal’s demons are horrifically gorgeous to look at and even better to kill. There was a grin on my face most of the time as I drove a mechanical part into an enemies eyeball or flattened a zombie’s head into its chest so it looked like something out of a cartoon.

Enemies can also be defeated in parts now too. You can use powerful weapons to shoot and break their own weapons they have equipped rendering them useless. I often shot off a few pulse rifle arms while running away from a giant demon and circled back around to finish the job. No guns for arms meant no damage could be done while I was scavenging the surroundings for health. 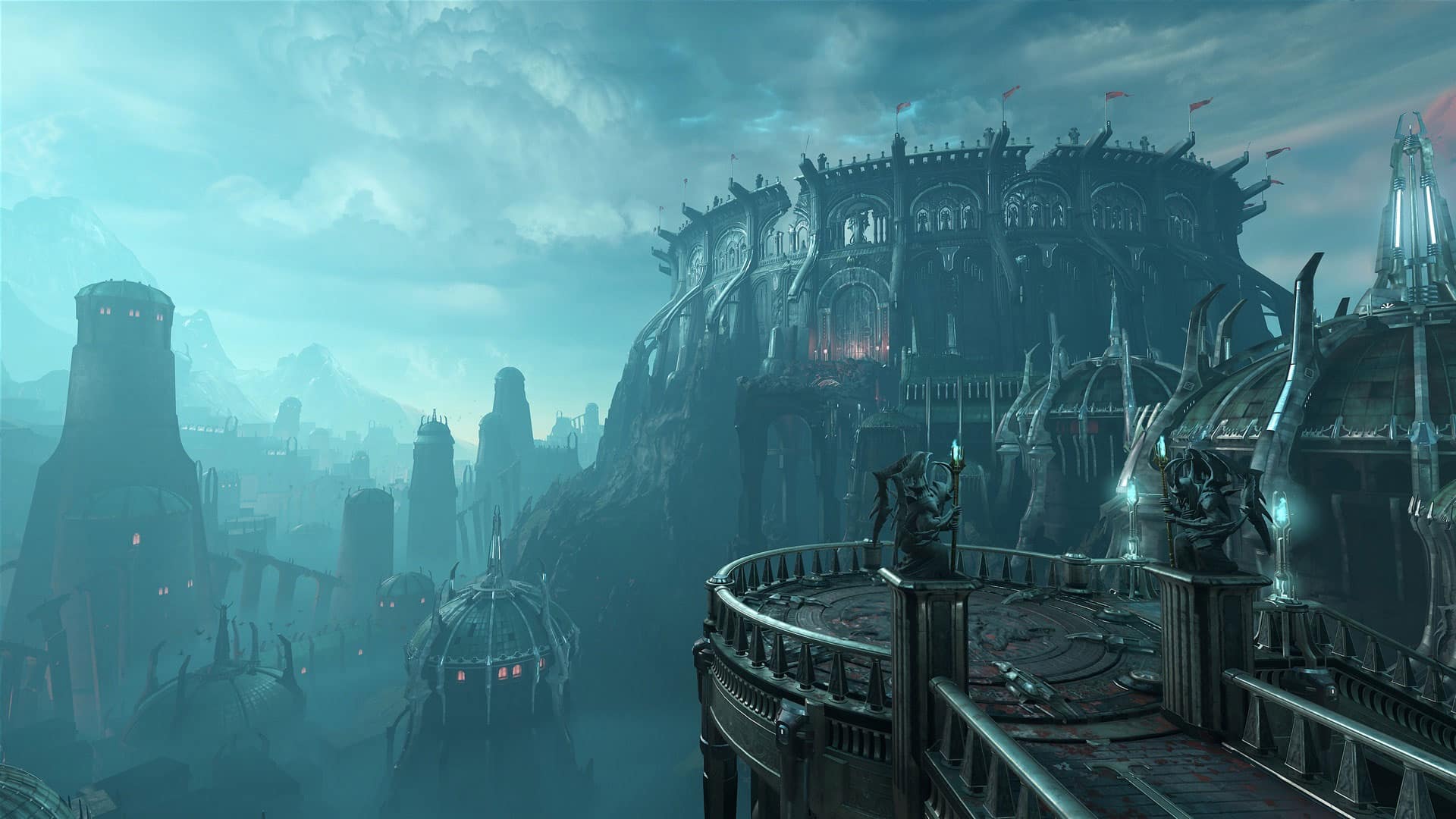 DOOM Eternal’s balance also relies on an extra life system that helps bring balance to the tough combat. You can pick up lives that when you die, you get revived on the spot and you are invincible to damage for a short amount of time. During the toughest of moments, I found myself relying on these lives as a crutch to save my soul from a fiery death. No, these lives are not plenty and chances are, when you find one you will probably need it as the challenge room will throw everything at you.

While the combat shines in DOOM Eternal, there is also a large emphasis on exploration of which I did not get enough time with during the E3 demo. However, I do have a feeling it will be a game-changer in the main game. Bethesda has taken the game’s movement system and implemented smart parkour puzzles into the mix that expands the world to a whole new level. This gives you new ways to approach different stages, opportunities to track down secret locations and of course, new ways to fall to your death.

You can now swing across poles and even clasp onto walls and climb up and down them in order to reach new places. If anything, the potential of the exploration makes me pretty excited to try and track down all those mini DOOM guys and of course, the new upgrades that are hidden throughout the stage.

While running, grappling, dodging, reloading, burning enemies and picking up health and ammo, everyone and everything was trying to kill me

While DOOM Eternal looks like it is pretty much the same thing all over again, it is and it is not. There is a lot going on in the sequel that is pushing the game’s great combat and exploration to a level that is making it stand out as a genre of its own. It is simply one explosive gore fest to witness but at the same time, while fighting through hordes of enemies, I could not help but keep opening up my map to discover all the secret areas I could have missed along the way. That is what makes a DOOM game so great and Eternal has plenty of that on offer. 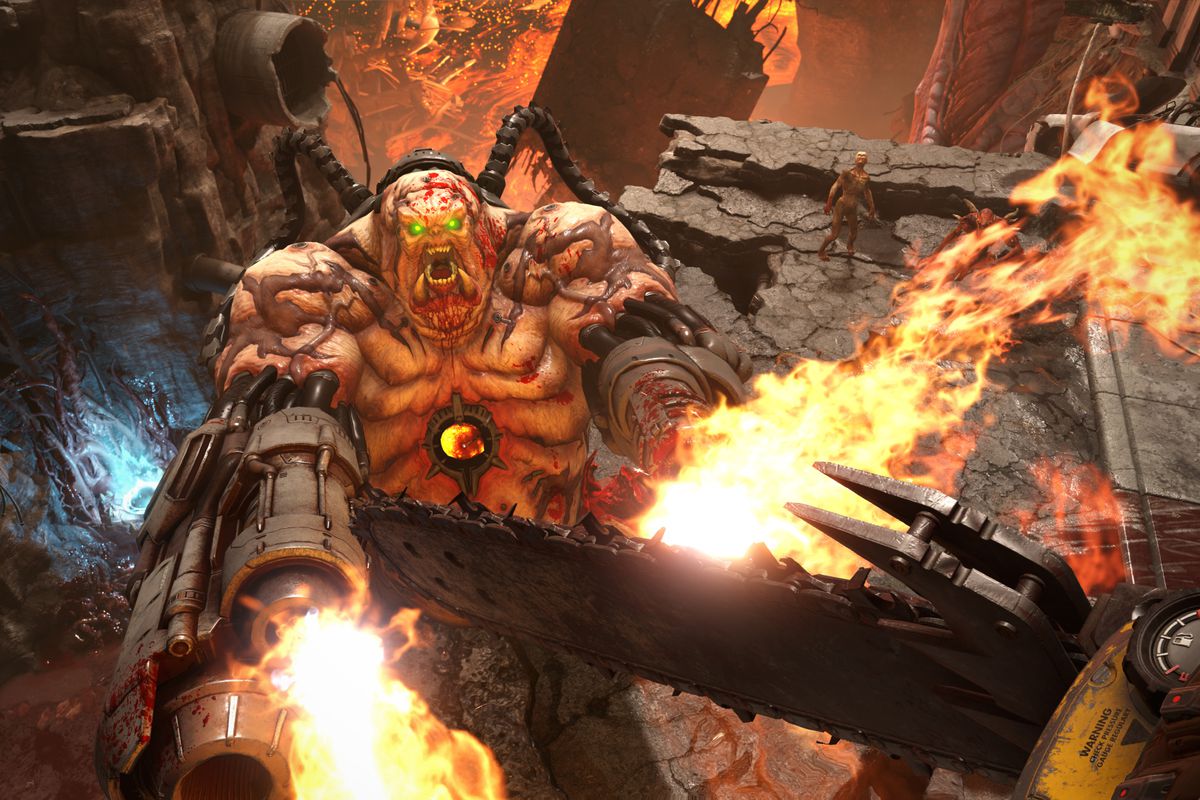 DOOM Eternal may just be the game I spend a good amount of time on when it releases on 22 November 2019. It has that bloody magic that is fun and satisfying to experience. It may be that game that will be a challenge to master but when you have grasped everything on offer, you will be one awesome demon slaying killing machine.