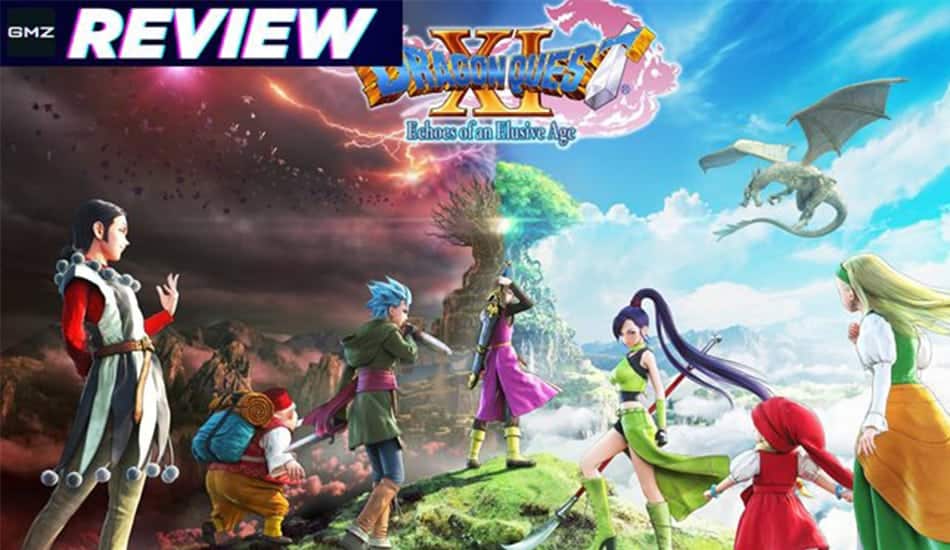 I am a real sucker for a good old JRPG and so far 2018 has left me feeling a little “meh” when it comes to the genre. Sure, this year marked the release of Ni No Kuni II: Revenant Kingdom but it was a bit of a let down due to its mechanics being Westernized to suit the lazy gamers. My last hope for this year was none other than Dragon Quest XI: Echoes of an Elusive Age and I have got to say it could be the best JRPG I have played in a couple of years. Don’t let the large number at the end of the title fool you, this Dragon Quest XI has been built with hardcore fans of the series and newcomers in mind and like all past games, its story is unique and stands on its own so you don’t have to be clued up with the series to jump into this magical game.

Dragon Quest XI: Echoes of an Elusive Age feels like a classic JRPG done right. Its heavy focus on story, exploration and combat are the three pillars of the experience of which Square-Enix nailed down from the start. Many JRPGs these days fail to fully realize its cast by just throwing in a bunch of party members that you are expected to care about without ever really getting to know them and their past. Dragon Quest XI did right by this as right from the opening moments, even the people you have just met that your silent character has known his whole life, leave you with a tear in your eye as you wave goodbye to them and venture onward onto the biggest adventure in the series yet. 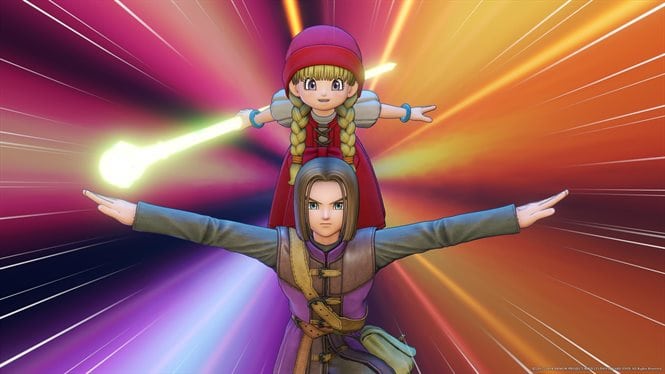 Dragon Quest XI is a phenomenal story as you follow the journey of your silent protagonist and his party of misfits as they explore a massive open world while trying to figure out why in the world people are after you. You are dubbed as the Luminary, a marked being said to bring peace to the world by fighting the darkness that is rising. However, a crazed king believes that instead of you being the saviour of the world, you are destined to actually bring about the calamity instead. A wild goose chase ensues and before you know it you have a few likeable people on your side exploring the vast world and playing through a delightful story. While the game does take a while to pick up, the 75+ hour campaign only gets better with every sit through. Sprawling cities to explore, great side quests to discover and of course everything in the game has that magic Dragon Quest look and feel to it that will keep you charmed for countless hours. 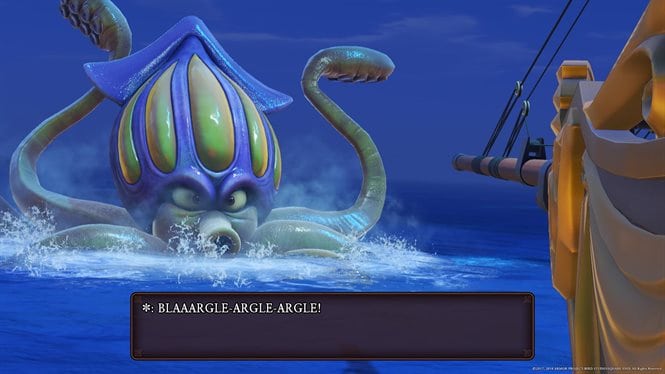 It was those moments where I had my soundbar on max volume, humming to the main theme song of the City of Gallipolis while shopping through the market for new armour and items to prepare myself for the next great trek across the desert that I have been so craving. That deep party management where you have to take the time to make sure your supporters are packed with items and gear to survive the next challenge. That is what a JRPG is all about and Dragon Quest XI has an abundance of it. 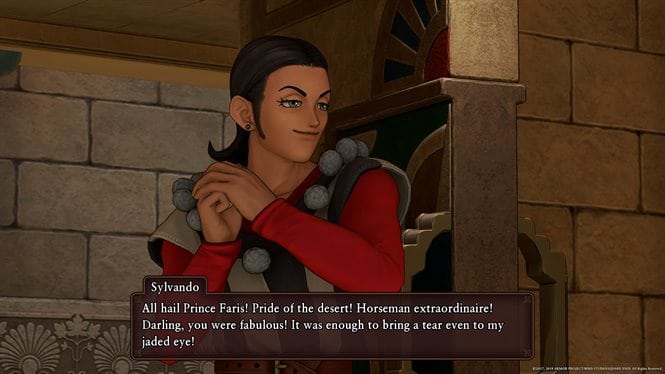 Not to mention that halfway through the game you already have this love for each of them as they cannot help but make a huge impression on you as they support you through your story in more ways than one. Veronica is an old mage turned young again by a demon. She has more attitude than someone you see on Dr.Phil but her tiny body and huge personality make for a delightful partner in the game. Erik is a badass bandit that you meet very early in the game and he slowly becomes one of the best people to be around. Of course, Sylvando was my favourite hands-down as he is the gayest jester in the realm and everything he says ends with either “darling” or “honey”.

All this character charm then oozes into combat too as unlike past games, you have much more freedom to choose what each member fights with and how. A simplified, yet detailed skill tree allows you to grow each character into a specific fighting style. The hero can wield swords, and greatswords and deal magic damage and there are three distinct skill trees you can invest skill points into to make sure he does the best job for what you decide. The same goes for each other character too as they have multiple weapons they can use instead of being limited to just one. Serena, for example, can use a spear or a magic staff making it a tough decision whether or not you need yet another magic character with you instead of maybe pushing her to use a spear which means more damage for you. 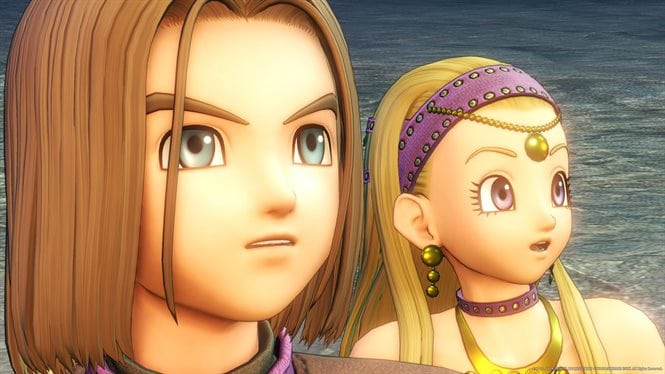 The fruits of your decisions in the skill tree don’t really come to light until much later in the game after you get deeper into unlocking these nodes. My hero lacked any real greatsword abilities until about halfway into the game where I unlocked a massive blade slash that decimated my foes. It takes a while to see the impact of the skill tree but when you have invested in a specific route it truly pays off. The same also goes for the new crafting feature that sees you invest time and effort into making specific new gear. You could overlook this but the gear you make is actually often better than what is available in the stores. This seldom happens in RPGs and it was a refreshing experience that forced me to hunt down specific crafting materials to make that hat that upped my defense by quite a chunk. 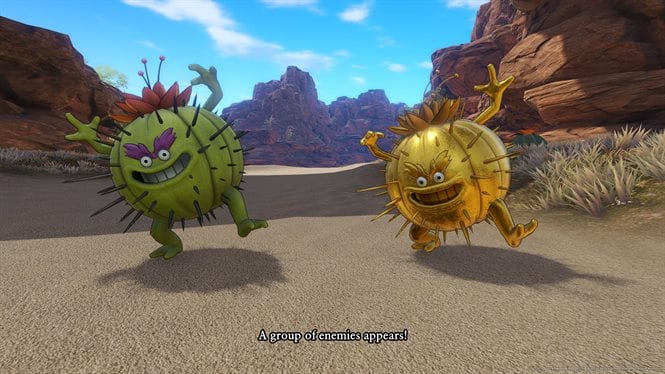 From the outside, Dragon Quest XI: Echoes of an Elusive age may seem to feature a new combat system but it does not. It makes use of the same old tried and tested formula that works. The major difference here is that instead of random battles taking place, the enemies are actually walking about your world and you can walk into them to start a fight, slash them to get the upper hand or even sprint away or even through them if you are on your horse. Yes, the game’s lands are so huge that you can explore them riding a horse too. Once combat starts you are in for the same turn-based attack system that makes the series so fantastic. Executing spells and melee attacks as quickly as you can and chaining together buffs and debuffs to bring your enemy down as fast as possible is what the combat is all about. Casting a group magic spell is rewarding as it can bring down a couple of the same enemies at once and given that much of your party can cast spells makes that tedious level grinds much easier to sit through. The only issue I had with the game is that much of the game’s earlier combat is very easy. It was not until much, much later in the game where I actually had to sit and farm levels to increase my chances of survival. This, however, did not get in the way of experiencing the game’s great mechanics.

A new feature in combat is the mechanic called Pep Powers which triggers at random times or more often if you have specific gear that boosts the chances. These abilities are cool combat changes that let you combine special abilities with other party members to pull off massive attacks or even large debuffs and buffs. Some of these include a buff that lets your entire party deal critical spell damage for a few turns, a two-character slash that deals a huge amount of damage and other useful combat abilities. As great as these sound, they trigger at random and most of the time they would appear while fighting a weak group of enemies which meant that you either hang onto being pepped-up for longer in hopes of a boss fighting starting soon or waste the big attacks on weaklings. Being pepped-up lasts for a while even if you don’t use it but it does go away if you sit on it and wait. 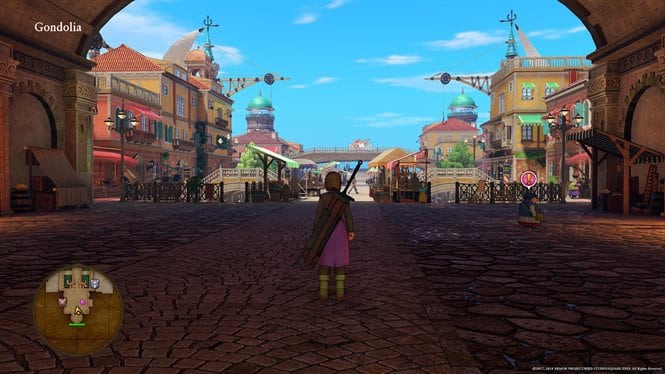 Dragon Quest XI: Echoes of an Elusive Age grows bigger and bigger as the game goes on. The large open world hubs create a true sense of discovery as the paths split into different areas delivering bigger opportunities for exploration but often these are harder areas which you are better equipped to face later. The world is gorgeous and could be the best in the series. Enemies are exciting to face and often I would just fight the same enemy over and over again because he died in a cool way. It is just oozing with charm. Everything from its soundtrack right down to its story is simple perfection and I could not pull myself away from it.

Dragon Quest XI: Echoes of an Elusive Age curbed my appetite for a good old JRPG and I doubt anything that comes along in the next few years will be able to match its charm. From the moment the opening CG cinematic started I knew I was in for something spectacular and it delivered on all fronts. This was well worth the wait.