At the game awards this morning, Ubisoft revealed a brand new Far Cry game and it is probably one of the most exciting announcements from the event. Dubbed “Far Cry New Dawn” the game is a follow up to the highly-successful Far Cry 5 and is actually set after the ending of the game.

Far Cry New Dawn takes place in Hope Montana, 17 years after the nukes fell from the sky and the so-called “end of the world” prophecised by Joseph Seed which actually came true. America has just been through a nuclear winter and Hope County has been blessed with managing to survive the “end of the world” thanks to its resurgent mother nature. The lands are now full of life and colour, blessed by the rain and sun and the vegetation grows ever stronger. 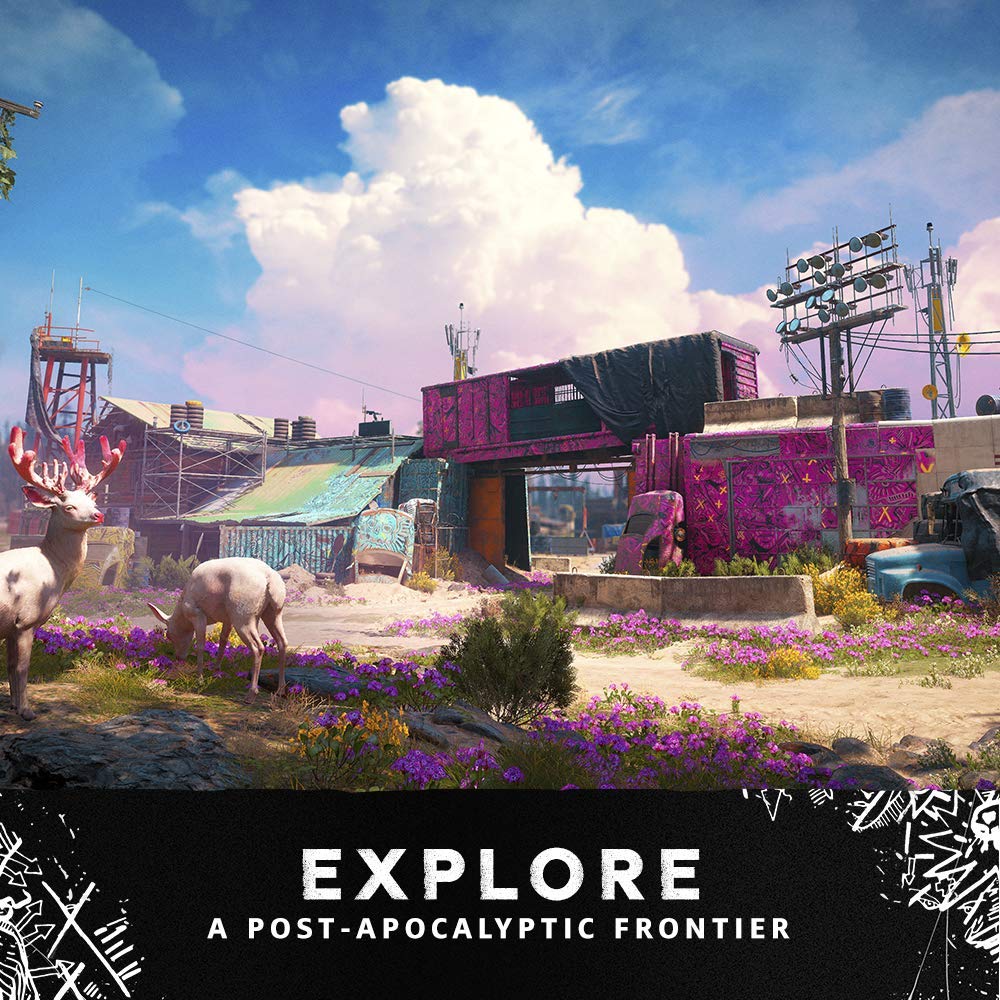 The world has been through some dark times as the nuclear fallout created a deadly climate due to the sun being unable to reach the earth with all the clouds in the sky. July summers dropped to 2 degrees Celsius, and the world was on the brink of collapse. 17 years later and the healing has begun, the people have emerged from their bunkers, the lands have begun healing and the post-apocalyptic world is not as dreary as you would think.

The survivors of the nuclear winter now work hard to reclaim their lands for the sake of the future. Farmers work tirelessly producing ethanol to power their machines that plough the fields and vehicles that help them hunt to survive. However with every humble man comes a deadly threat and in Far Cry New Dawn, a band of modern-day pirates calling themselves the Highwaymen threaten the daily lives of these innocent survivors. 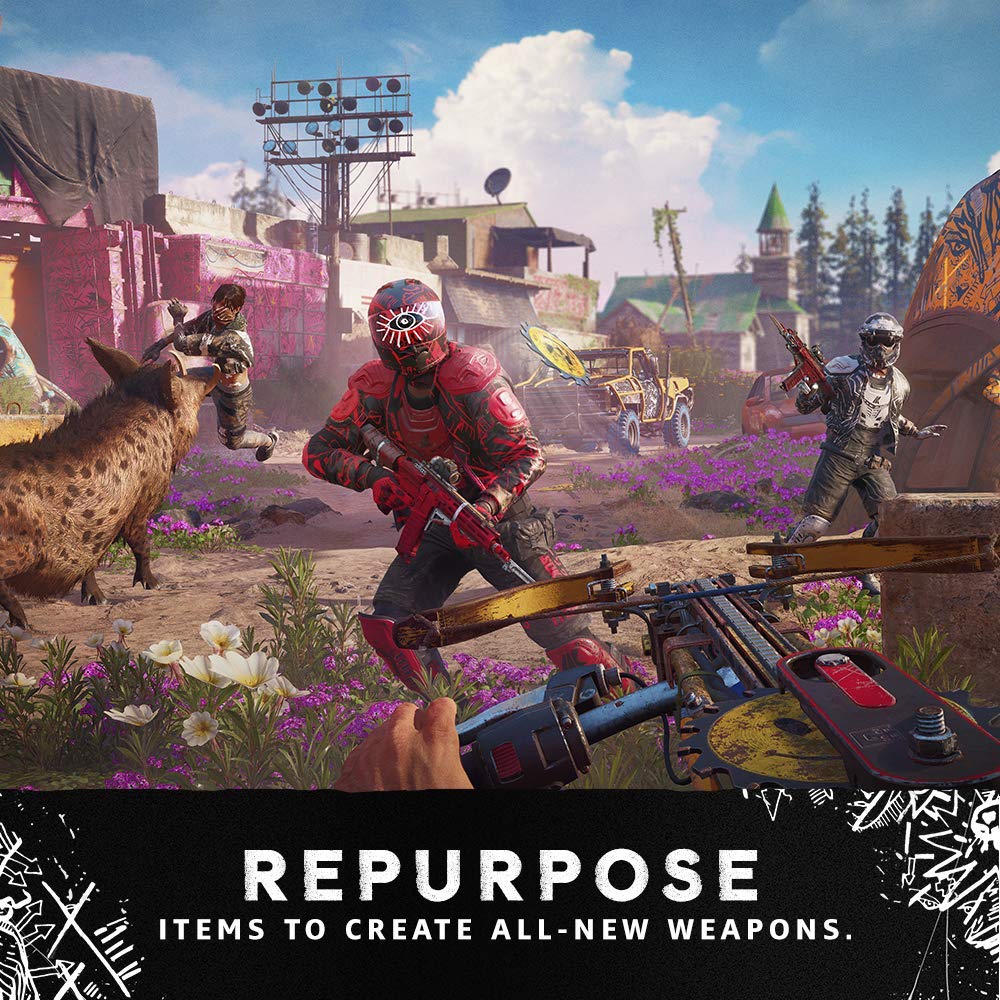 Led by two sadistic siblings, Micky and Lou, the Highwaymen feed on fear and run a lawless group of savage humans. They kill whoever stands in their way and claim any resources for themselves.

In Far Cry New Dawn, survival is the key objective and this theme feeds into all its new features. Defending your home-base using makeshift weaponry, fighting for the good people and trying to make it through the deadly world that has evolved more than you could ever imagine in 17 years. You will have all-new Friends for Hire, Fangs for Hire and the great characters you remember from Far Cry 5 is the inspiration for all the diverse people you meet along your journey.

Kim Rye, The Survivors and the Highwaymen

Kim Rye, who you will remember being Nick Rye’s wife (the one you rushed to the hospital while in labour) now leads the Survivors and built a home base where children are safe from the dangers of outside. The lands revolve around ethanol as it is a rare commodity that keeps society moving forward. Without it, no resources can be farmed and transportation would be non-existent. Far Cry New Dawn will feature a home base system where you will be able to upgrade its features such as the Training Camp, Garage, Healing Garden, and Cartographer. However, resources are scarce and the threat of the Highwaymen is bigger than anyone could imagine. 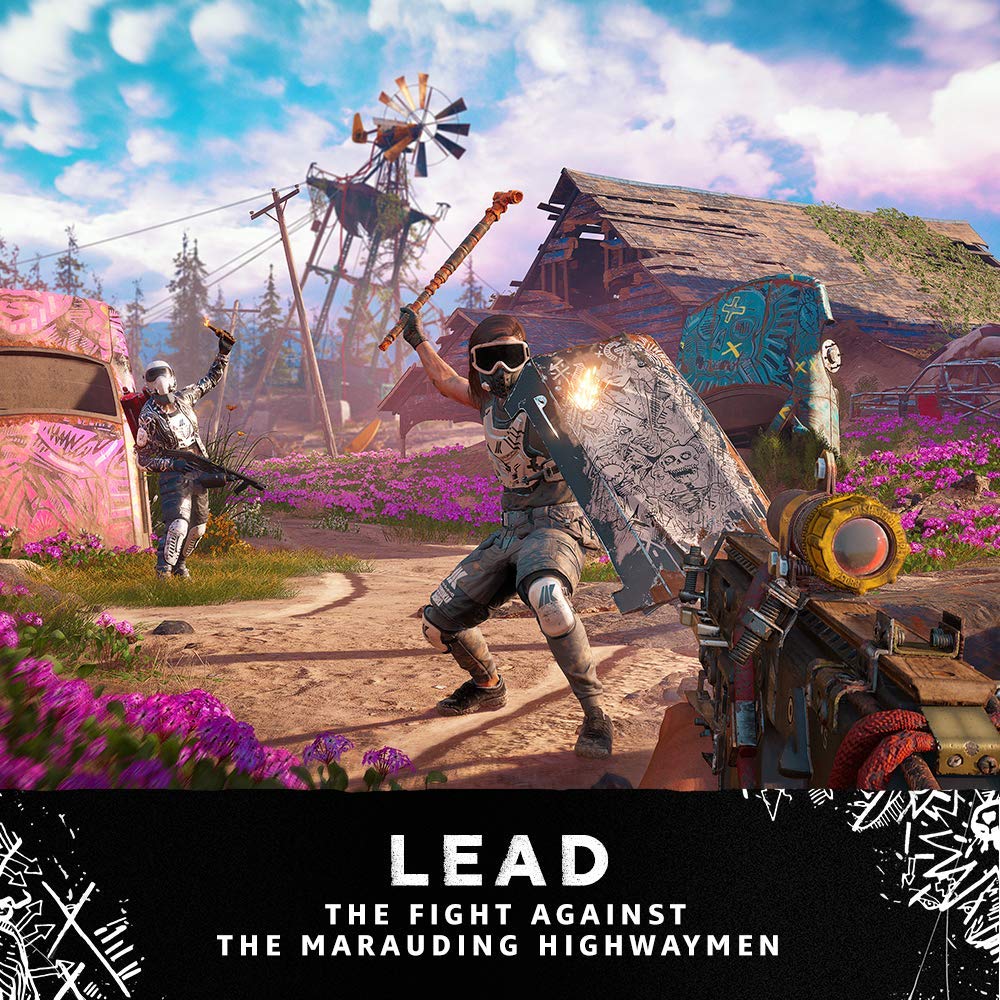 The Highwaymen’s leaders, Mickey and Lou were lucky at the time the bombs dropped. They found themselves at the Eastern seaboard with access to a large supply of food, vehicles, medicine and weapons. They have had 17 years to prepare for the moment they storm the lands and take everything for themselves. They have already been taking over the West and now they are heading towards Montana. Mickey and Lou are twin sisters and daughters of the Highwaymen founder. For them, it is killed or be killed.

The world was almost blown apart so it makes sense that the weapons we all know and love from the Far Cry series were blown apart with it. Far Cry New Dawn features a new weapon system that features a highly-customizable armoury that allows you to change your weapons and upgrade them with the right resources. The “off-the-shelf” weaponry is gone and they are now replaced with some hardcore makeshift weapons. One example is a Saw Launcher that spins out sharp and deadly blades at enemies and when upgraded it can spin out three blades instead of one. When it comes to Guns for Hire and Fangs for Hire, the game will have a balanced co-op experience that will be great playing alone or with a friend. Carmina, Nick and Kim’s 17-year-old daughter is probably the most prepared for the world as she was born right before the bombs fell. Nana is an elderly lady that also happens to be a stealthy sniper described as a sharpshooter with a sharp tongue.

As for the Fangs for Hire, Boomer is long gone. He did not survive the war but there is now Timber, an Akita who now even travels with you in your vehicle. Horatio is a giant hog trained to attack anything and everything and can ram into enemies sending them flying into the air.

You will take these characters and animals with you on your missions and speaking of, the new Outpost system sees an improvement over Far Cry 5. Once you have taken over an Outpost in Far Cry New Dawn, Highwaymen can come and reclaim it increasing its difficulty and even reinforcing the Outpost making it harder to get it back. You will also set off on missions across the United States which will take you to unique and exotic locations to claim valuable resources.

This is just scratching the surface of Far Cry New Dawn. As we gear up for its 15 February 2019 release, we will no doubt learn more and see much more of the game. What do you think of Ubisoft’s take on the end of the world? Let us know in the comments below.