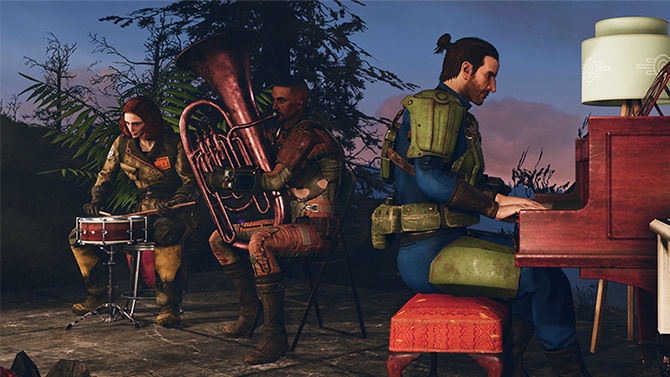 The Fallout 76 beta kicks off on Xbox One on Tuesday, October 23, and one week later (Tuesday, October 30) on the PlayStation 4 and PC. While we do have some concerns over Fallout 76 being a completely different game than its predecessors, we are excited to test the new features and explore West Virginia.

In case you missed it, the Fallout 76 beta will not run during all hours, as Bethesda is limiting it to “targeted timeframes” so they can better test the servers with as many people online as possible. So, they are ‘forcing’ people to play only at specific times to better test the performance of the servers. Bethesda has yet to announce the timeframes. All we know so far is that the beta will be available to play for only four to eight hours per day.

If you’re going to participate in the Fallout 76 beta, then make sure you update the game well before the beta begins on your platform. According to Open World Games, there is a massive 48.15 GB update waiting for you. So far, he can only confirm that the Xbox One requires the update, but it is very likely that it will apply to all three platforms.

Pre-loading is now available for Xbox One beta participants, with the first session scheduled for 7 pm ET to 11 pm ET on October 23. My guess is that the update is the result of the Fallout 76 stress tests that ended recently.

Bethesda explained earlier that “The Stress Test is an early version of the full game. However, it is not the same version that will be used for the B.E.T.A. or launch.” It, therefore, makes sense that the 48.15 GB update is the result of the stress tests.

In other Fallout 76 news, Bethesda confirmed via the official Fallout Twitter account that factions are part of the game.

Just before the bombs fell, US leadership re-located to a remote Oil Rig off the coast of San Francisco. The Enclave’s mission – to re-establish governmental control of America from key locations, like a secret bunker hidden somewhere deep in Appalachia… #Fallout76 pic.twitter.com/ISnqcVwheE

We know there will not be any NPC’s in Fallout 76, so it is unclear what role Factions will play in the game. My guess is that players can choose to belong to one and that it will unlock things like gear, weapons, and armour.

November 2077, a month after the Great War, army Captain Roger Maxson arrived with survivors at the Californian bunker of Lost Hills. There he formed the Brotherhood of Steel, who used a functioning satellite to extend their reach across America… all the way to Appalachia. pic.twitter.com/NjcX8NVGMj

Besides the Enclave, Bethesda also confirmed four more factions; the Brotherhood of Steel, Raiders, the Free States, and the Responders.

All across America, they were the first to run into danger: the brave fire fighters, police officers and medical professionals who selflessly served their communities. After the bombs fell, they formed the Responders. Their mission – help each other… no matter the cost. pic.twitter.com/CxonTtnqTa

The Enclave played a major role in Fallout 2 and 3. This faction originated and consists only of top-ranking U.S. government officials and elite soldiers. They pride themselves in being the most technologically advanced faction of the Wasteland. The Brotherhood of Steel appears in every Fallout game and is a quasi-religious technological military order.

On October 23, 2077, the world was plunged into nuclear war. But what if you expected the worst? And planned for it? In Appalachia, a group of doomsday preppers did exactly that. Organized as the Free States, they holed up in their bunkers. And survived. At least, for a while… pic.twitter.com/a85PAvAVCQ

The Responders is a brand new Faction that appears in Fallout 76 for the first time. They consist of volunteers made up of firefighters, police, and medical staff. Their primary function is to teach Wasteland dwellers important survival skills. Raiders are also new and appear as ruthless highwaymen in Fallout 76. Lastly, we have the Free States, another new Faction created specifically for Fallout 76. They also specialize as Survivalists, but unlike the Responders, they pride themselves in being Separatists.

Ruthless. Selfish. Bloodthirsty. Since the day the bombs dropped, Raiders have been the scourge of the wasteland. In Appalachia, Rose is their enigmatic leader. But who is she? And what does she hope to gain, as she watches the carnage from her roost on the Top of the World? pic.twitter.com/yzYNld6xOU

Why would Bethesda create new Factions that only appear in Fallout 76 if it wasn’t going to be an important feature in the game? On the other hand, it can help to give depth to the game by way of expanding the lore. One concern I do have over Fallout 76 is that the game will feel ’empty,’ so adding backstories could help. Adding Factions, even better.

Fallout 76 releases on November 14 for PC, PS4, and Xbox One. In closing, have you listened to the beautiful Fallout 76 main theme by Inon Zur? It is a striking piece and sets the perfect mood for exploration.