Ubisoft has taken me by surprise with the first DLC pack for Far Cry 6. Sure, it may reuse a lot of assets and the whole “into Vass’ mind” seems like a cheap and unoriginal gimmick into the villain’s backstory. However, the roguelike gameplay approach means I sat for a dozen hours exploring a map and slowly growing Vaas into a killing machine. Ubisoft has nailed down the addictive roguelike gameplay in this Far Cry 6: Insanity DLC and the rinse and repeat approach, along with the intense difficulty made the experience thoroughly enjoyable. If anything, I wished the main game had a challenge as close to this. It would have been just what it needed.

Far Cry 6: Insanity, as you might have guessed already, follows Vaas as he explores his thoughts and past memories surrounding his sister and the events that took place in Far Cry 3. If you don’t know what happened in the original game, I suggest you watch a YouTube video because it is important in order to piece together exactly what is going on in this DLC. Even I was lost at times because I played Far Cry 3 years ago. Even though I sorta remember what happened, there were moments in this DLC that flew right over my head. 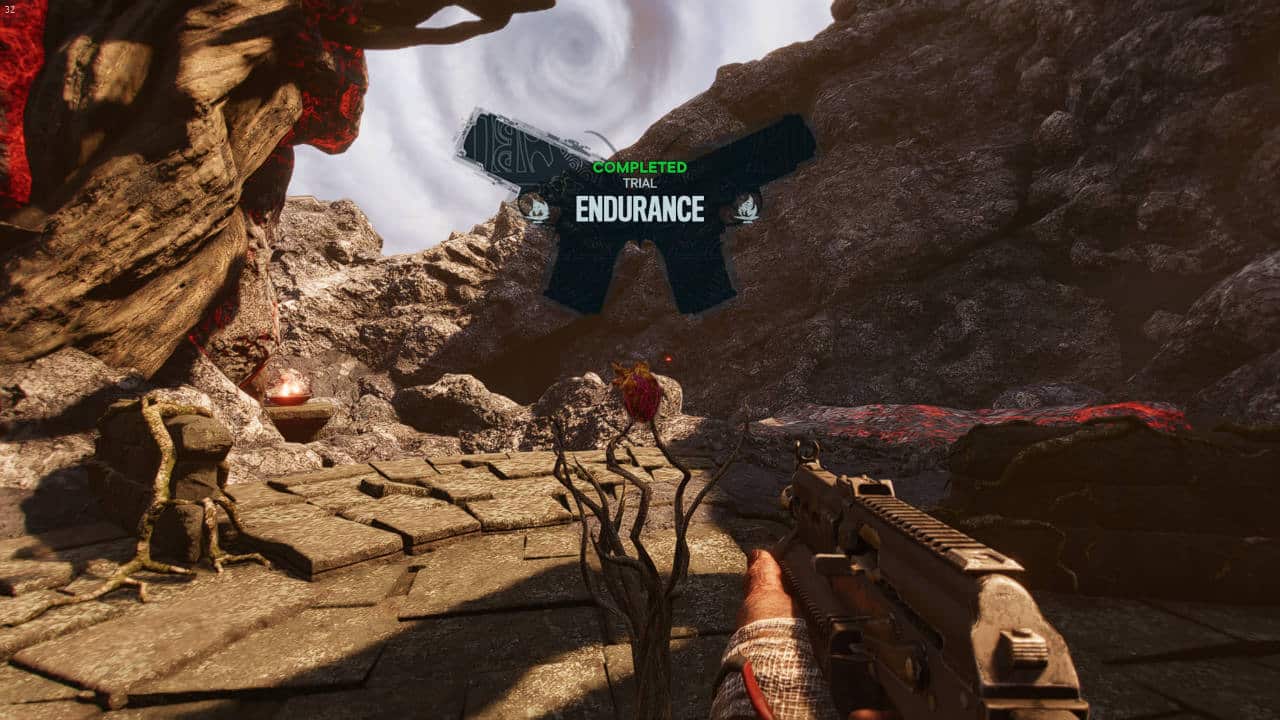 This DLC can be seen as a bite-sized experience or you can suck all the juice out of it if you want. In short, you need to, as Vaas explore a map and hunt down three pieces of a dagger in order to complete the content. It is much easier said than done as these three dagger shards are scattered in different areas of the map. Each of the three pieces is also protected by a challenge. I won’t spoil what these are but just know getting them isn’t easy.

Vaas starts out with a basic pistol and is thrown into the map. I had to run around killing enemies, opening chests and completing trials in order to rack up money and unlock new weapons. Each weapon trial I completed permanently unlocked a “weapon crate” which I could then purchase at the start of each run. However, the money I earned was lost when I died. Unless I unlocked a permanent perk that let me start with a set amount of cash at the start of each new run. 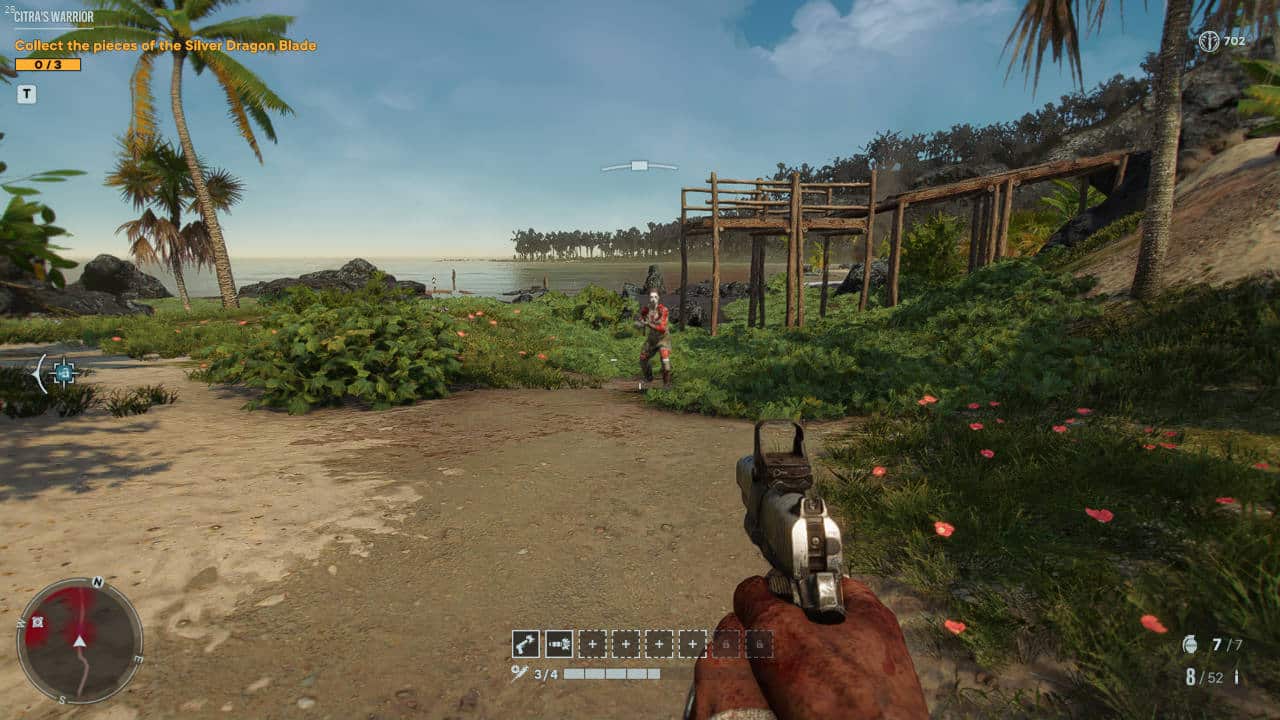 Speaking of perks, Vaas has a range of them available to purchase using this money too. They unlock gadgets, more health, sneaking abilities and more. Some seem more important than others but this all depends on your play style. I didn’t want to sneak around so I ignored the entire perk tree that offered buffs for silent takedowns and faster crouch movement. Instead, I immediately unlocked all the health perks and gadgets. So I could go all guns blazing when I needed to.

Weapons can also be upgraded. Well, the weapon cached anyway. They range from basic to legendary and have four upgrades available per crate. As I mentioned before, these guns need to be unlocked first by completing a trial in the world. This trial saw me mow down a set number of enemies before becoming available. I could also replay these trials if I didn’t want to pay for the gun at the start of a new run. Unfortunately, this trial would then reward me with a basic version even if I unlocked the upgrades at the shop. 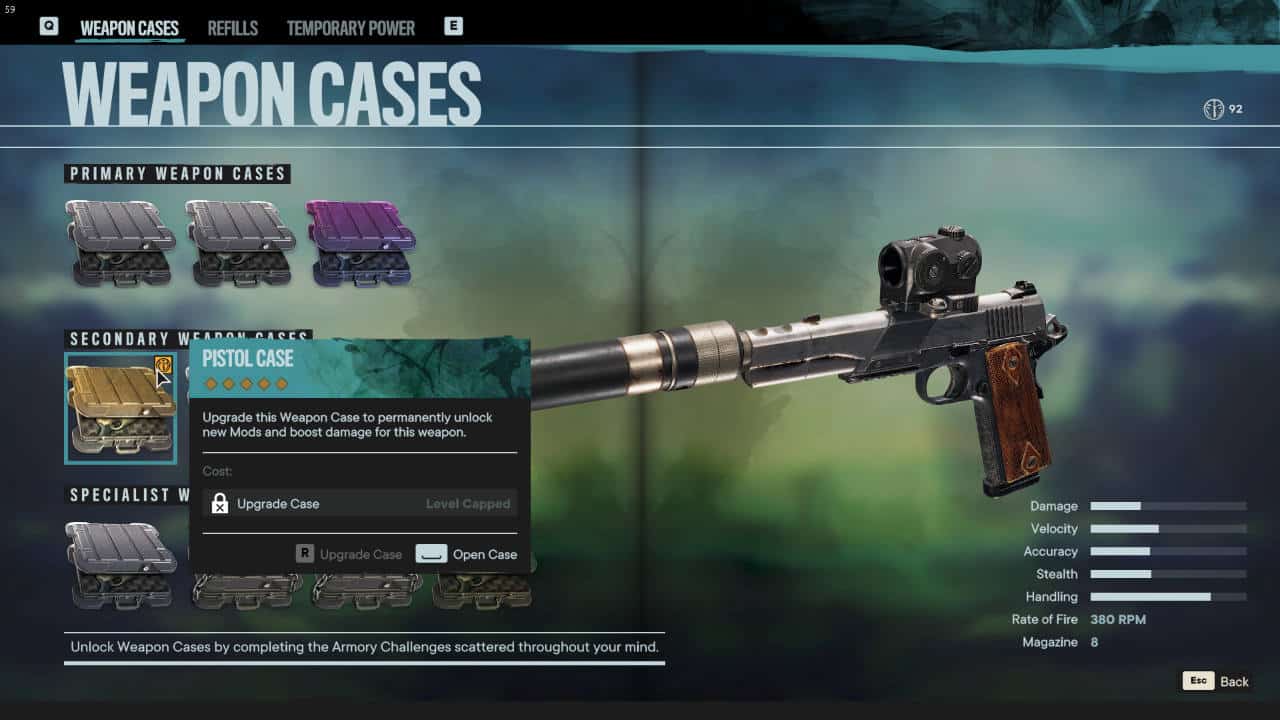 With all this in mind, Far Cry 6: Insanity is a fantastic experience especially for players who enjoy this repetitive slow-burning gameplay. I would head out into the world, do some stuff, kill some enemies, open chests and rack up enough currency to head back to my safe house and unlock some new perks. I would then slowly get better and better as this took place. My guns would have more mods on them and my perks would make a massive difference when the going got tough.

It also helps that Far Cry 6: Insanity is a tough chunk of content. I never died, until I flew into a tree by mistake with my wingsuit, but in comparison to the main game, I had to really think about what I was doing and take every bullet into account. Enemies hit hard, animals pack a deadly bite and the world has been designed to challenge you. Some trials included poison gas that spat out the middle of the room and I had to find cover to avoid breathing it in. Others threw dozens of flamethrower enemies at me. 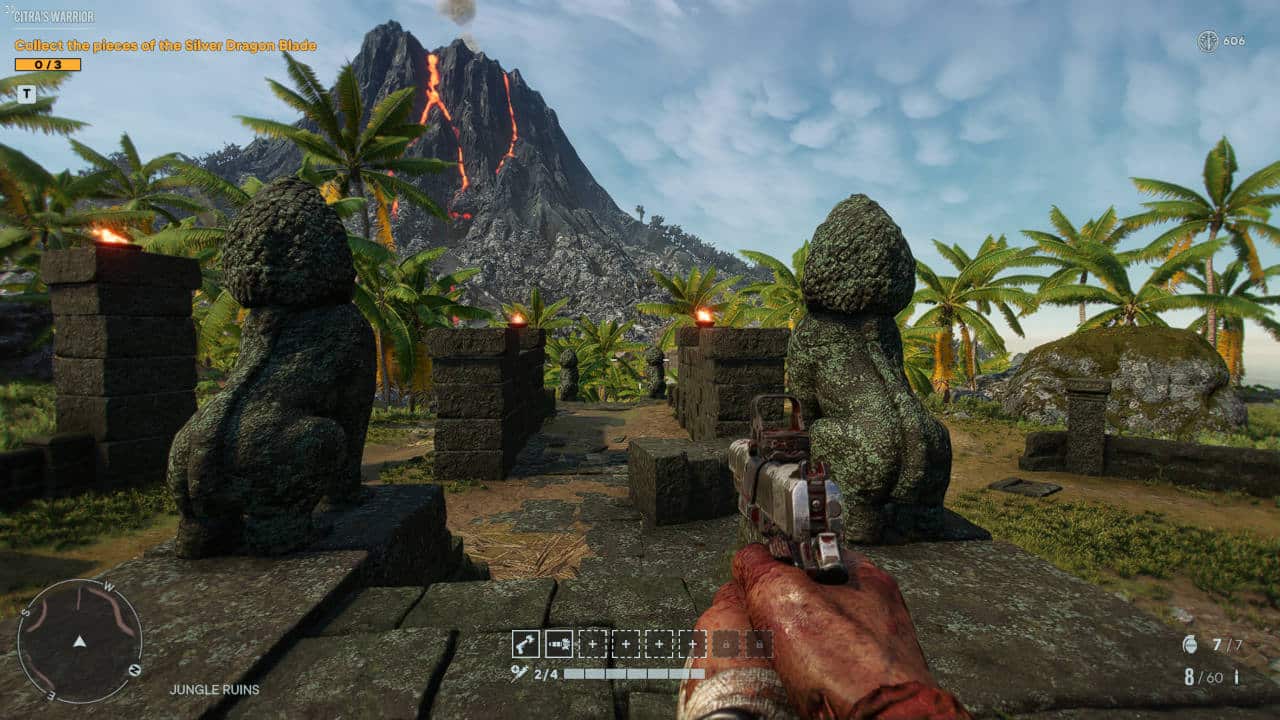 Ubisoft wanted this to feel challenging and they hit the nail on the head here. There are also multiple difficulty settings to choose from that increase the enemy health and damage so you can test all the perks and weapons you worked so hard to earn.

I loved how this Far Cry 6: Insanity opened up new ways for me to play it every time I exited the game and came back into it. I could reroll weapon mods with new perks. Some have poison that turned enemies against one another, others even set enemies on fire. This is then combined with the traits I found in the treasure chests scattered across the map. 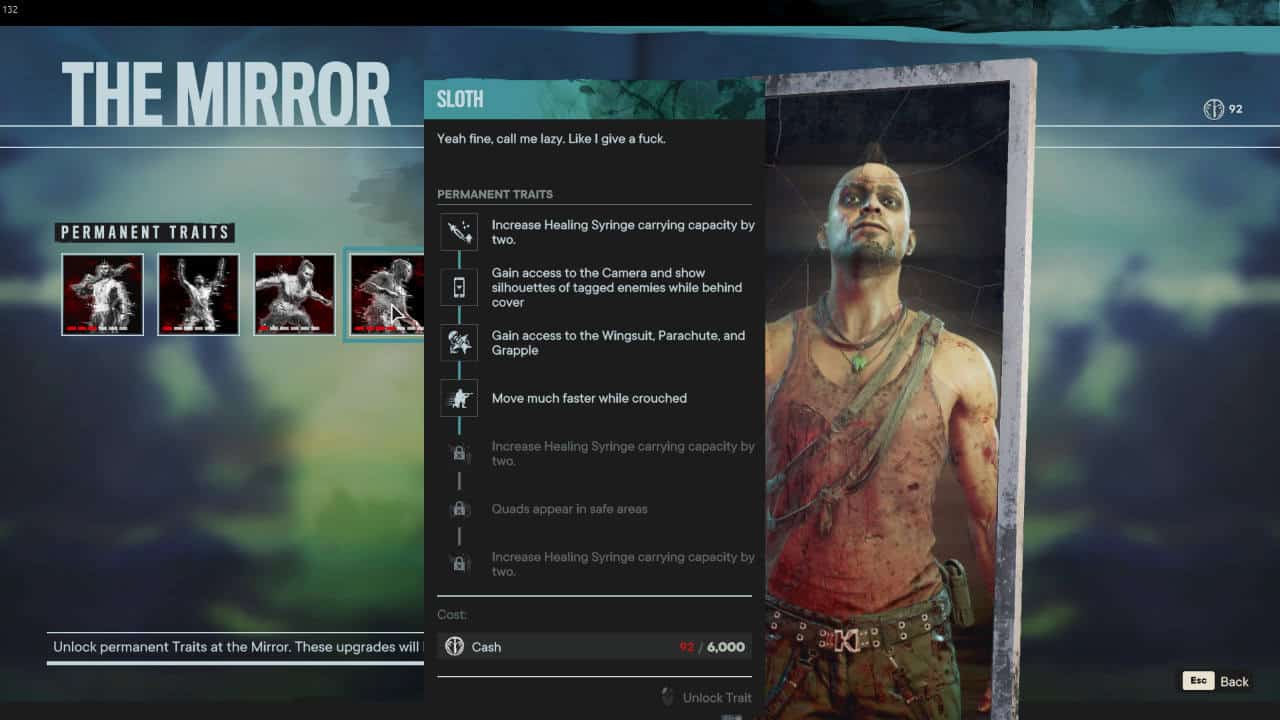 These traits also came with some unique buffs that often tied into the weapon mods I was using. For example, one increased movement speed and decreased walking noise when I got a silent kill. So I made sure to reroll my pistol with a silencer. That way every kill I got, I was granted the buff.

There’s also a lot to enjoy here when it comes to Vaas and his story. I got a glimpse at his childhood and his relationship with his sister, Citra. These memories are also delivered in unique ways at cool-looking locations. I literally had to dive into Vaas’ memories to see them. These “Mindfucks”, as Ubisoft has named them, are the highlight of the story here. Anyone who was invested in the Vaas and Far Cry 3 plot will love them. 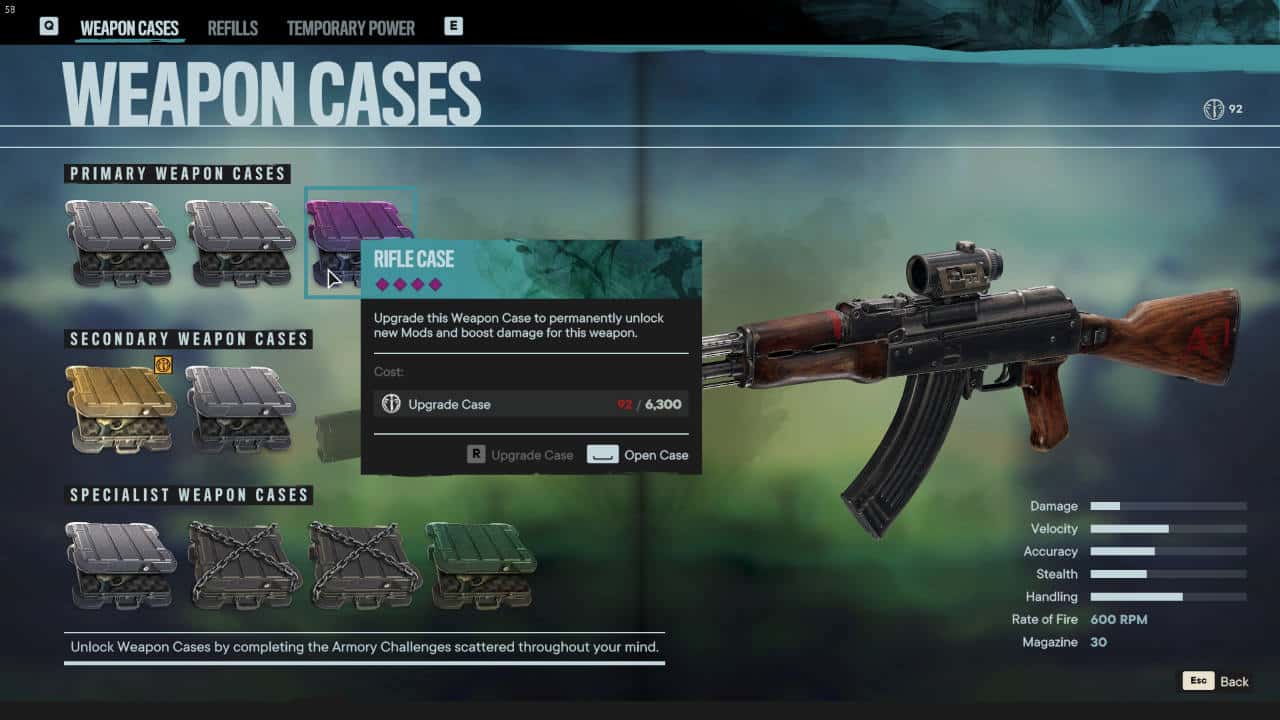 Far Cry 6: Insanity is also fully playable in co-op. While I could not test it out for this review, I will definitely be replaying this content with my brother when it launches. I will probably try to get to the highest difficulty which will rely on heavy co-op teamwork. Again, something the main game is surely lacking – a challenge.

The first Far Cry 6 DLC sets a high bar for things to come. Ubisoft has created an entirely unique game within a game here and the experience is incredibly fun to play through. You can get your money’s worth by completely unlocking all the weapon crates and perks and exploring the island to its fullest. Unlike the main game, the rewards for doing so feel worthwhile.

This Far Cry 6: Insanity review was based on a code sent to us by Ubisoft