From mad-as-a-hatter missionaries to terrible twins, Far Cry has pressed insanity levels into the red zone during recent outings. Volatile scenarios in this latest from Ubisoft are similarly hair-raising, the action can be downright brutal, yet core themes feel much more grounded.

During several hours spent shadowing reluctant hero Dani Rojas, the lure of larger-than-life guerrilla warfare became stronger by the minute. The concept of a one-person-army proved effective, and different enough to what we’ve grown accustomed to from Far Cry. There’s a brooding, methodical approach to progress in which any small victory is worth celebrating. Being Dani is empowering, igniting a real fire in the heart to pursue a soulless dictator.

We chose to run with the female Dani, though it is possible to select a male avatar and the two are interchangeable – boasting exact same capabilities and following an identical script. It transpires early on that Dani is ex-military, trained to kill, but unwilling to stir things up in her civilian life. But tragedy strikes, and horrors unfolding demand that Dani takes up arms.

The game lucidly captures the sense of Dani starting out with next to nothing, only survival instinct and hunger for justice. From being accepted by the Libertad rebels, to introductions with legendary revolutionaries some hours later, the backstory unfolds at the player’s pace. The journey is often as fulfilling as the destinations. Ancient mysteries add to the intrigue of the island itself, adding an ancestral dimension to the Yarans’ cry for help. Stories of the godlike Triada, and of a hero that must become worthy enough to wield relics of the past. There are puzzles to solve, some of them navigational, while others are pure mechanical. 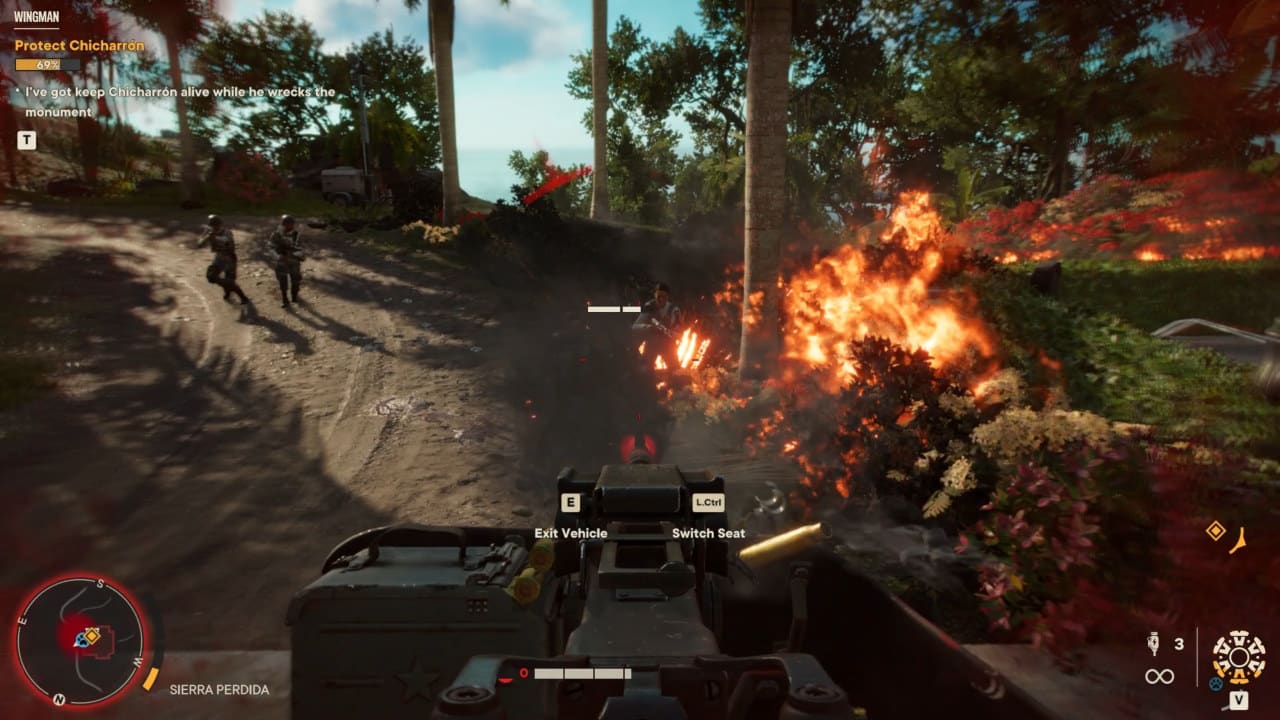 Military dictator Antón Castillo is a hate-worthy adversary. His misguided cruelty toward his own people ought to set anyone’s blood boiling, the injustice bringing a lump to the throat. You may feel duty-bound to chase down every last one of Castillo’s associates, the familiar cat and mouse with soldiers around hillsides and small villages. However, the idea of making progress is broader in Far Cry 6. In a way, it’s like carefully escorting Dani closer to home – the more you understand, the more Yara belongs to Dani and vice versa. It’s a cool theme.

On the subject of progress, Dani’s core abilities remain the same throughout the adventure. Basics include wall mounting, sliding into cover (always cool), and a grapple for climbing or swinging. There are no superpowers, no skill trees. Dani’s potency as a guerrilla fighter is linked to gear unlocked through experience (EXP) — the slow-burn process of levelling up. The compulsion to acquire superior gear is strong since low-level weapons are prone to wild recoil patterns and lengthy Time to Kill. Dani is also dressed pretty much in a paper bag. There’s a certain charm to cranky old pistols, rifles and SMGs, but they make hard work of eliminations from range. It’s fine to learn the essentials of taking cover, but scurrying to safety soon gets old. The downside is that early battles are messy and kind of embarrassing. On the upside, any improvement is welcome, and gear refining becomes a mission in itself. 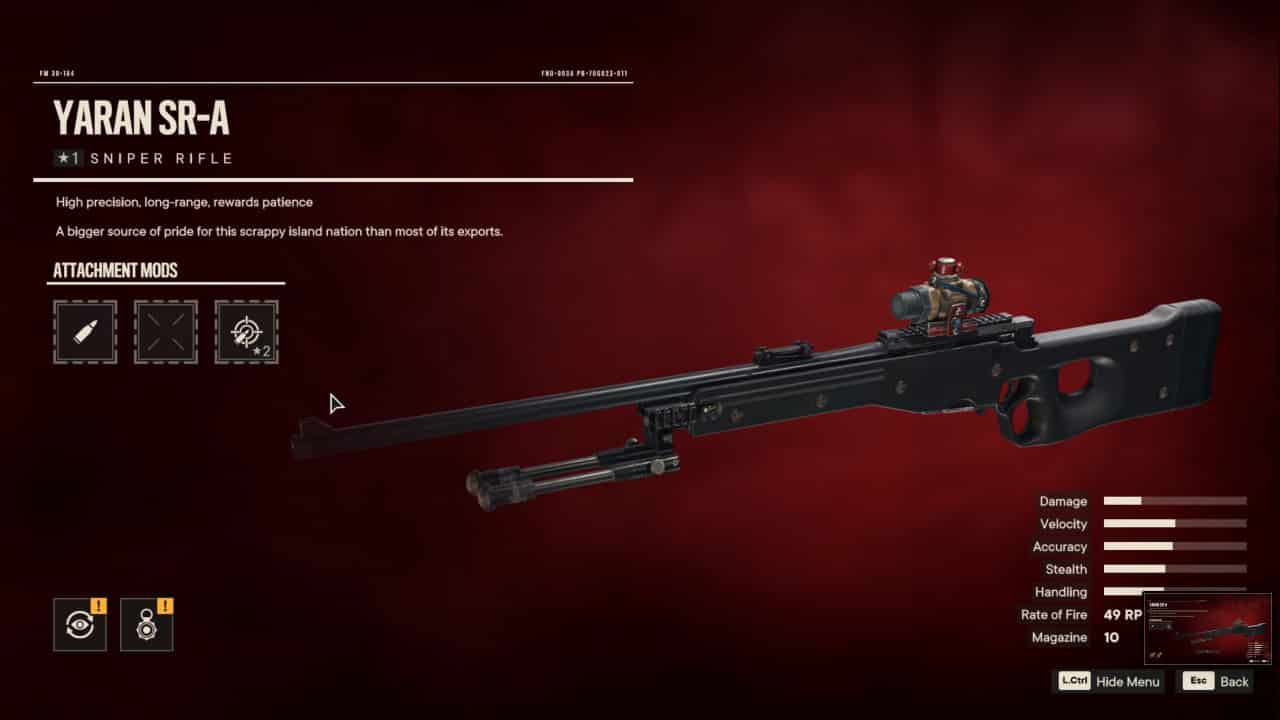 Since Brody in 2012, we expect some kind of crazy with Far Cry. Dani and the guerrilla allies are ¡Muy Divertido! but that’s not the same as cuckoo. Murderous pets on the other hand …

So, it is hard to take a crocodile assassin or a battle rooster seriously. Doubt we’re expected to make a wiener dog an essential accomplice. That said, having Guapo chomp after targets, or Chicharrón tear into the fray, claws raised and wings flapping, is a genuinely good strategy. Just as nudging tiny Chorizo toward unsuspecting guards as a distraction — so that Dani can slink by unnoticed or get close enough to slit their throats — is appreciated game design too. 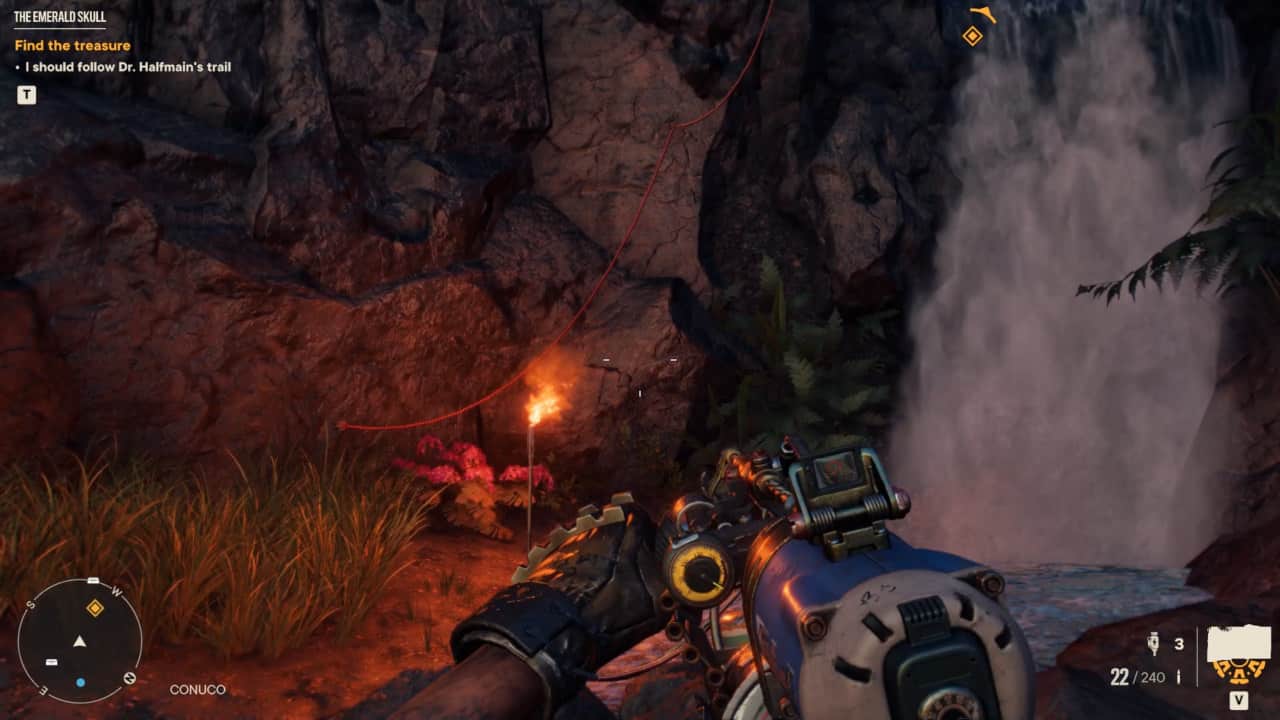 These so-called ‘amigos’ are the Far Cry 6 answer to animal companions in Far Cry 5 (and Primal before that). They’re not as amazing as, say, Boomer in FC5 who tags enemies, but they are entertaining. Guapo is a loan from a mentor, owned from the start, but Chicharrón the rooster and later a pelican named Danilo are introduced via amusing side-missions. All things considered, the amigos make a valuable contribution to Far Cry 6 gameplay.

Based on a few hours’ gameplay, Far Cry 6 has the potential to be one of the strongest in the series. Dani is a no-nonsense protagonist, with a cause we can believe in. Yara Island is a terrific, and vast, ‘sandbox environment that has an endearing personality all of its own. There are signs of a compelling endgame too, with the gear-oriented power structure. We’re inclined to trust that Ubisoft timed its endgame perfectly against the story-driven aspects.

More than anything, Far Cry 6 and its ‘Resolver’ guerrilla outlook is a vibe we can get into. As open-world settings go, Ubisoft proves its grasp of freedom versus control by design.

This content was produced with the help of Paul Davies who played the game and supplied his hands-on gameplay and opinion. – Thanks, Paul!!