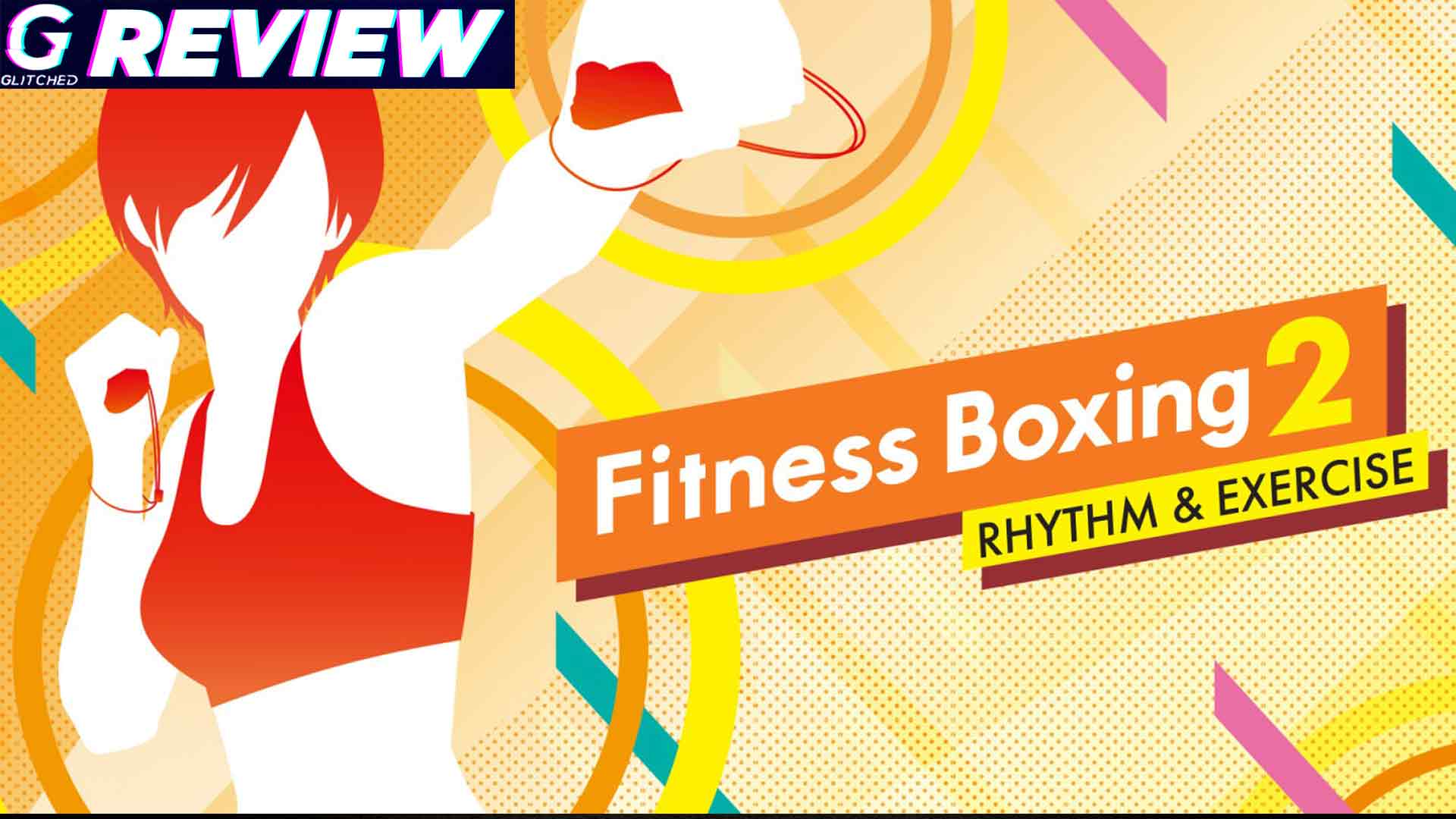 Combining a workout and gaming into one experience is nothing new, especially for Nintendo. The company has delivered multiple ways to stay active over the past decade with Ring Fit Adventure being a standout in the industry. Of course, it is natural that other developers would want to use the Nintendo Switch hardware to do the same thing. The console offers an experience like no other and the Joy-Cons allow for more freedom especially when replicating motion. Fitness Boxing 2: Rhythm & Exercise is one of these games. It is also the sequel to the original Fitness Boxing that released back in 2018 and if you enjoyed the original, you may love this one just as much.

Does Fitness Boxing 2: Rhythm & Exercise beat Ring Fit Adventure? Not by a long shot and that is most likely the game’s biggest downfall. Nintendo has its own killer fitness game on the market which makes everything else feel pretty mediocre. However, there is a silver lining here. We are in the middle of a pandemic that urges people to stay at home so the more “home workout games” the better.

Fitness Boxing 2: Rhythm & Exercise follows the same premise as the original game. The idea here is that players should return on a daily basis to take on a challenge or just work out to their own freedom. As the title says, it is mainly a boxing game so expect a lot of arm swings, ducking, weaving, blocking and stepping left and right. At the end of a workout, you get scored on how accurate all those movements were and the intensity increases over the days as you return to take on more challenges.

There is a lot of freedom this time around. Free training lets you choose which workout to do, how intense they are and what type of music you want to listen to while you punch the air and swerve all over the show. For the most part, Fitness Boxing 2: Rhythm & Exercise reminded me of other rhythm games. As I stood in my lounge, two lines of icons kept creeping up my screen and I had to perform the correct movement in order to “hit it” and score points. Each icon represents a different jab or body movement but it is quite simple to master after a while. It also helps that these icons have letters on them to guide you too. 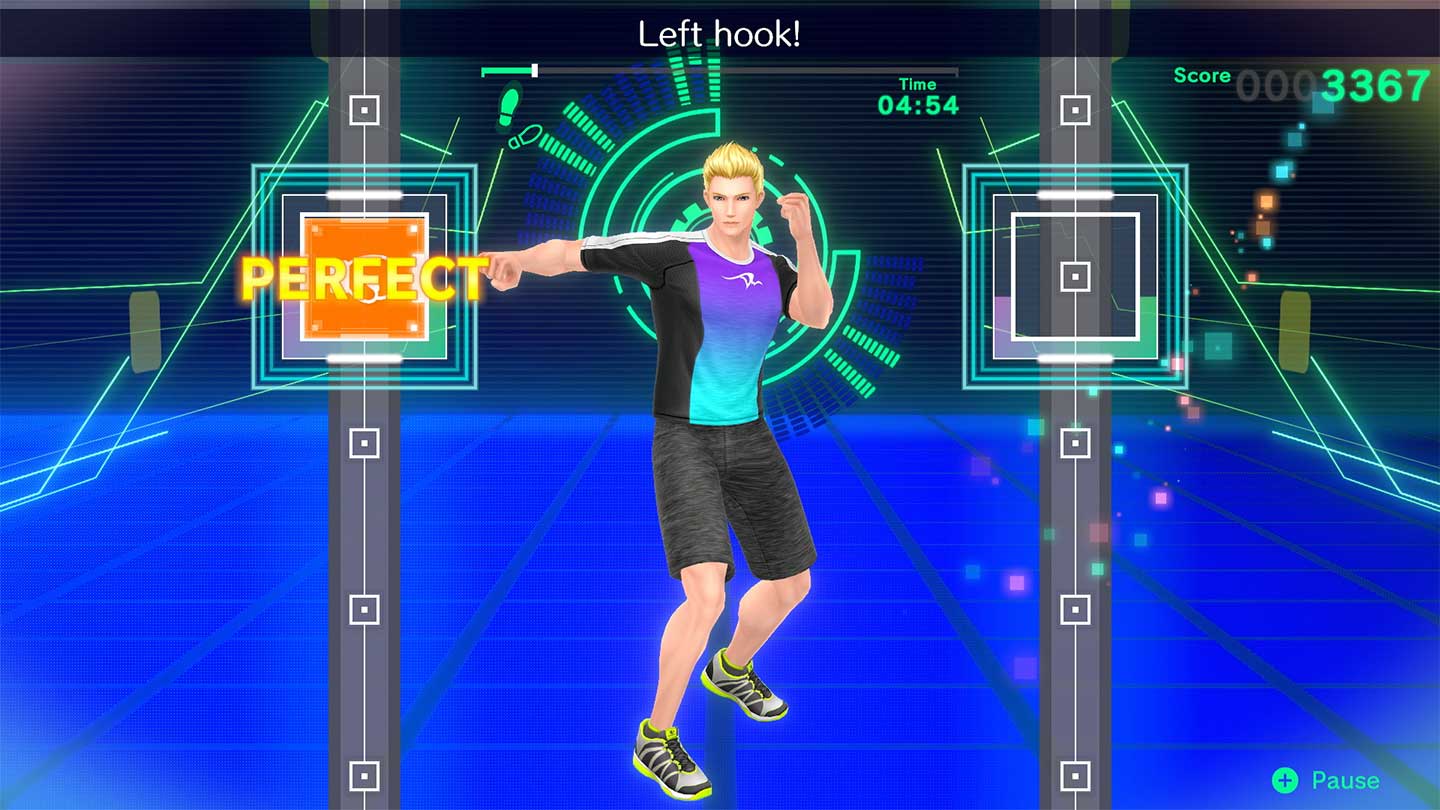 Where Fitness Boxing 2: Rhythm & Exercise falls short is in its motion tracking. Most of the time, similar punches such as a jab and a straight just failed to pick up in the game correctly. This issue then gets even more frustrating when the game starts to throw uppercuts and blocking into it. I don’t want to say the game can’t detect different movements because I don’t think that is the case but I think it gets carried away when the complicated sequences start to ramp up faster and more often.

I also could have just been my bad form and slow punches that caused this. In a way, Fitness Boxing 2: Rhythm & Exercise really pushed me to be as fast and agile as possible. Punches had to be speedy else they would not detect in the game. Ducking had to be actual ducks and not me just lowering my arms down. Not to mention the swerves had to be actual movements from side to side. When I did these actions properly, the game worked like a charm but I do think it could be a little more forgiving to allow a bit of breathing room depending on your body structure. 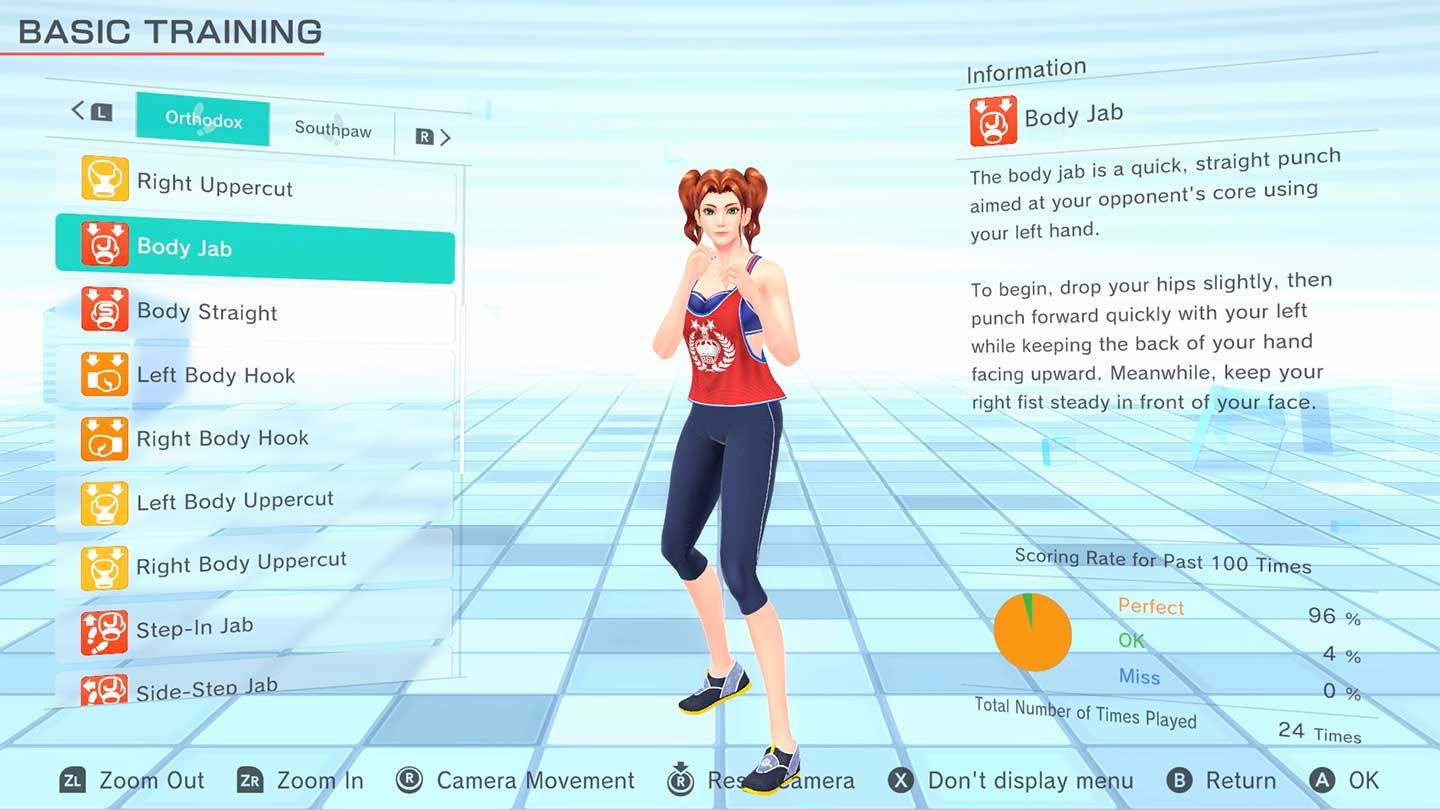 I kind of wished there was a way to see how my movements were looking on the screen instead of watching a custom character swing his or her arm only once I performed my movement. If I were to swing my arms around, my character should do the same. It would just help a little in long run to see whether or not I performed the jab as the game asked.

When it comes to the aids in the game, it goes a long way to make sure every work out is done correctly and I knew how to perform new movements. My instructor kept reminding me to breathe properly and to keep my core balanced so I did not hurt myself. I am two-meters tall so I am constantly worried about my back and everything I do which could cause harm to it. Fitness Boxing 2: Rhythm & Exercise did a great job guiding me through every new move so I never felt in the dark.

The information provided also told me how to manage my legs and how far to rotate my back while punching and performing the swings. Even though the character model demonstrating the move was a little stiff and animations were not perfect, it helped. 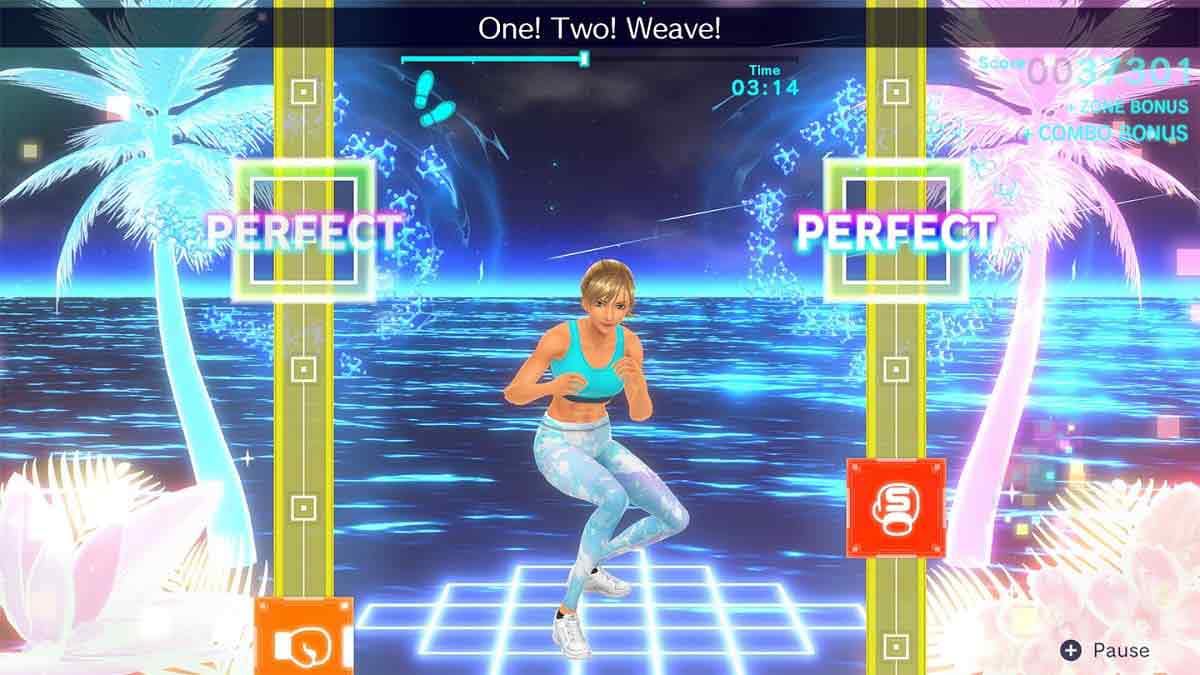 There are also nine instructors to help you through the game. Each of which delivers some fun personalities to meet. Not to mention, they all fit into the game’s over-the-top charm. You can unlock outfits while you play through the game so you can always have a fresh instructor wearing some fresh new kicks every time you reach a milestone. However, getting these outfits is tough and acts as the game’s main challenge. You have to earn orange tickets which are traded for new clothing. These tickets are obtained through milestones and unlocking achievements. They are never too tough so you won’t feel overwhelmed by them at all.

Music also drives most of the game’s experience as you rely on it during every workout. There are some well-known tunes including Hot N Cold by Katy Perry and of course, YCMA by the Village People. The game has a fair share of well-known tracks even if they are from an older generation. I enjoyed them all. What I did not enjoy were the original tunes. It was always easier and more uplifting to work out to music I knew because the work out relies on the beats. When you throw a song you don’t know into the mix, it gets in the way of things. 2o tracks are also quite low here too. Hopefully, DLC will bring some music packs to the game in the future. 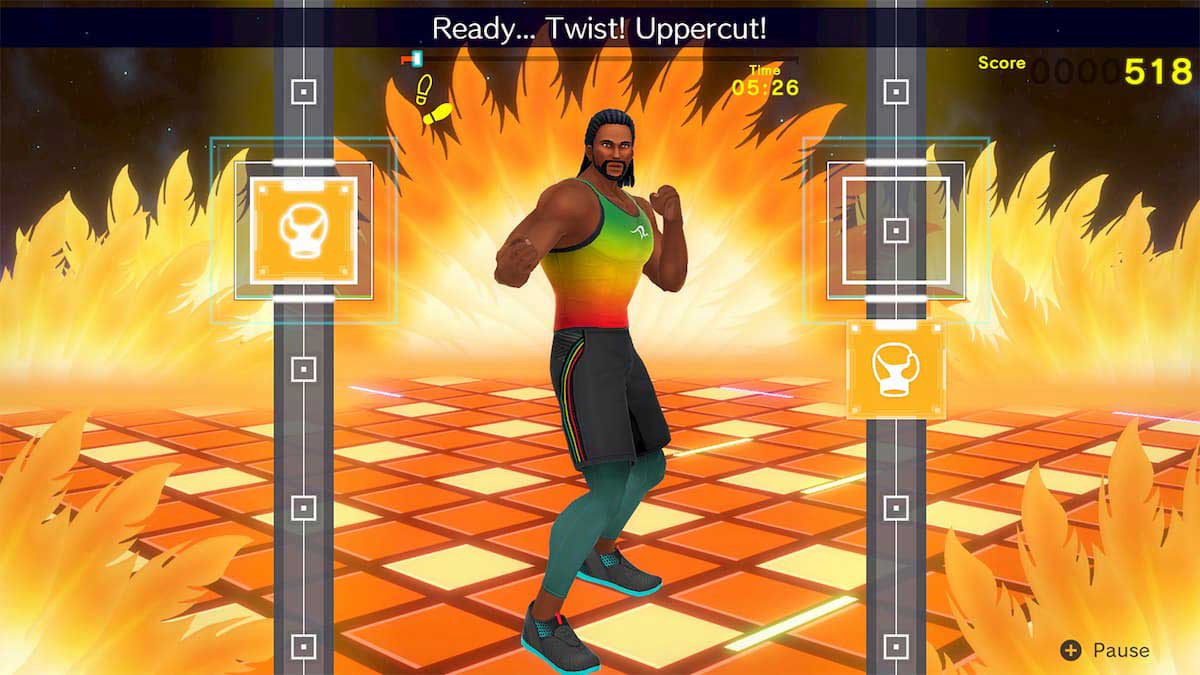 So the biggest letdown in Fitness Boxing 2: Rhythm & Exercise arrived when I had experienced everything there was to offer. The music became “samey” and the workouts became a chore. Don’t get me wrong, it is a boxing game so how far can you go here? However, that is just the issue. There simply isn’t enough variety to keep me going back day after day. It dies out within a week or so and I just got over it. Then again, boxing is just not my thing. Those of you who love it will love this.

This Fitness Boxing 2: Rhythm & Exercise review was based on a code sent to us by Nintendo