Thought-provoking, depressing and uniquely beautiful – these are the terms I would use to describe Frostpunk: Console Edition to those who haven’t played the PC version after its release on 24 April 2018. Developer 11 Bit Studios, in case you didn’t know, created This War of Mine, and they have upped their game even further with Frostpunk, a city-building / survival title that left me questioning every decision I made.

Frostpunk: Console Edition, first and foremost, is not just a port of the PC version that I loved and dreaded playing, as 11 Bit Studios have completely revamped the control scheme with a radial menu for ease of use with controllers. The menus have been redesigned and the new User Interface options provided me with quick access to buildings while moving the camera around felt natural and easy. It is clear that the developer took their time and put a lot of effort to not just throw in controller support, but do the game and its console fans justice.

Frostpunk: Console Edition doesn’t look as beautiful as it could running on a high-end PC but it was still uniquely beautiful on the PS4 Pro, showcasing the beautiful and deadly snow, the frozen lands and heat coming off torches, the generator and surrounding sources. It is, in part, this beauty that pulled me in once again, but it is the controller support that shines the brightest. In short, if you are on the fence about the game, since a city-building title with a lot of clicking usually doesn’t work out too well on consoles, don’t be.

Now, to the game, which sees the player take on the role of the Captain of a group of survivors in an alternate history take on the 19th-century industrial revolution, where the world has been frozen over due to climate change, mixing steampunk with a post-apocalyptic setting. The goal is simple, yet extremely difficult, build and maintain the last city on earth while battling the cold, hunger most of all, making impossible decisions for the greater good…and your own neck.

In my first eight tries with the game, I couldn’t even survive past 20 days of in-game time, as the peoples’ discontent rose too high due to my decisions and they exiled me to the cold, forcing me to start over again and again. To say that Frostpunk: Console Edition is challenging would be an understatement. I had to make choices, for example, forcing people to work for longer hours to keep the generator running, or if I should build a religious building to give them hope, or guard towers to rule with an iron fist for their own good. 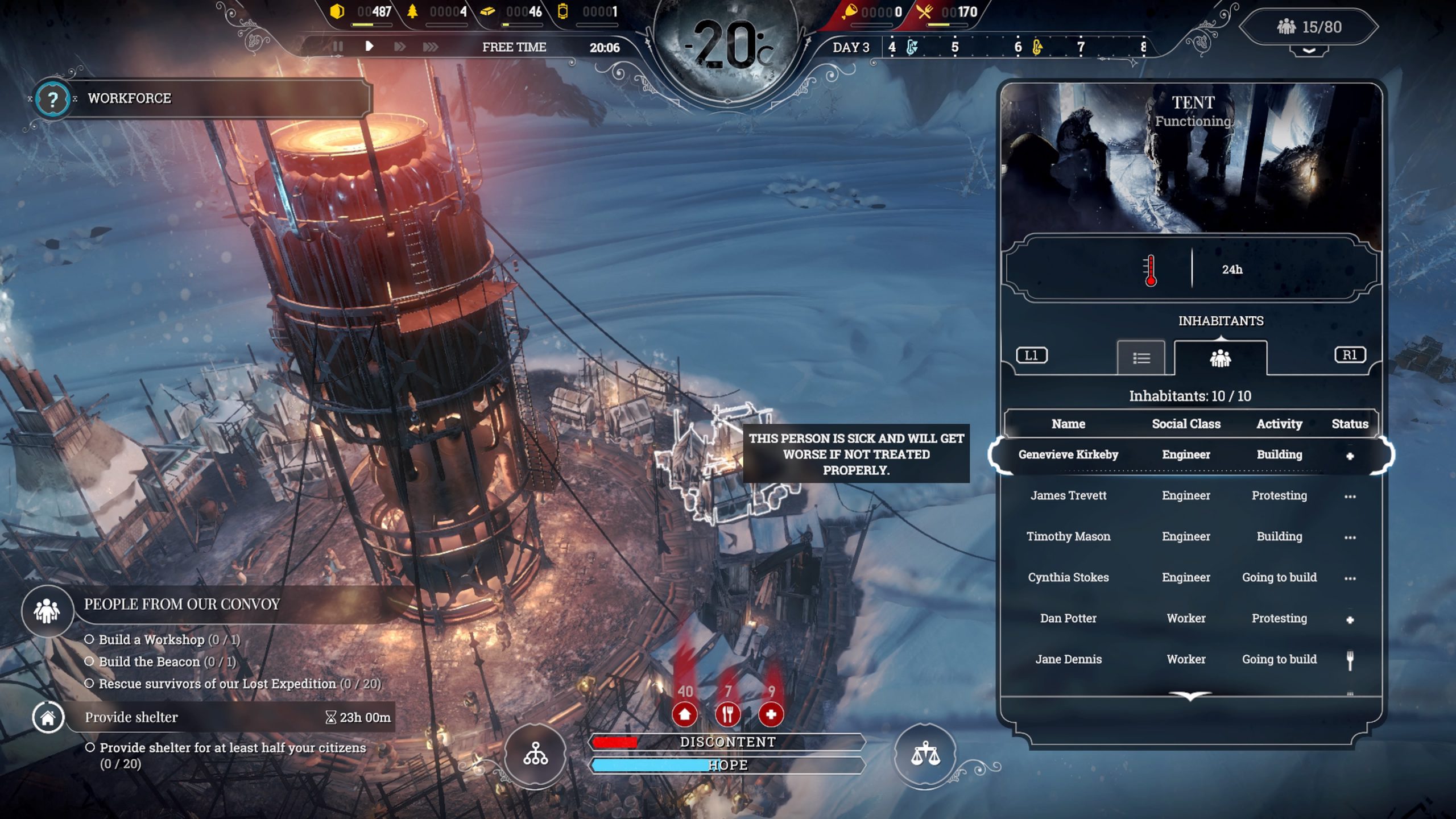 There’s a whole lot of interesting mechanics going on in Frostpunk: Console Edition from 11 Bit Studios and you learn more about them every time you fail, but it is an experience worth having. Instead of going through the fact that heat is of the utmost importance, how to pass laws, gathering resources and all that, I think it is best to tell you a story of one of my playthroughs. 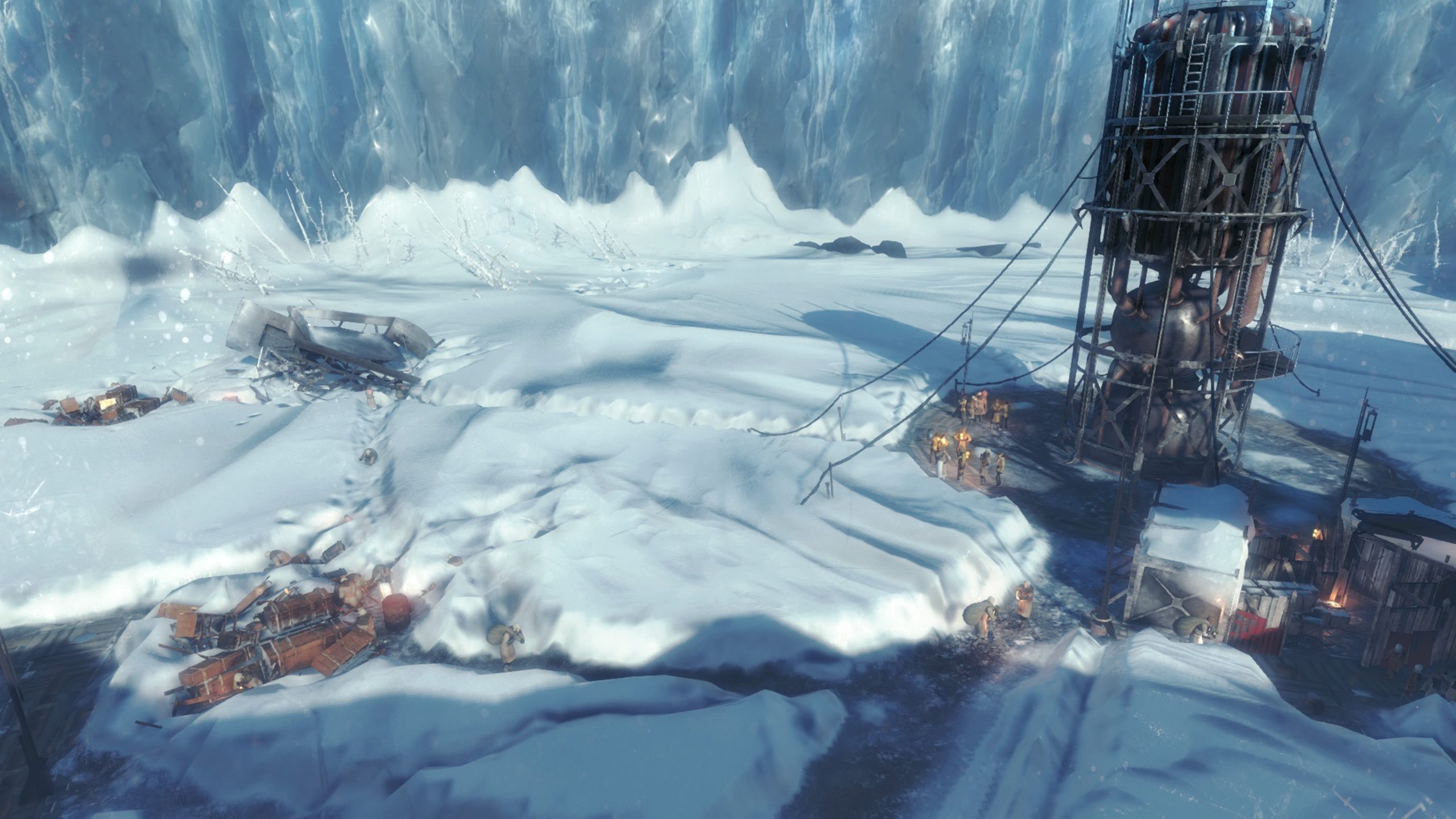 Without hesitation, I instructed my workers to build a medical post to treat the sick, instead of building more tents so everyone has something over their heads. I made a promise to the people that I would build more shelter, but unfortunately, resources were low and the next night was quickly approaching, so I signed a new law for an emergency shift, but this raised discontent slightly in my people. 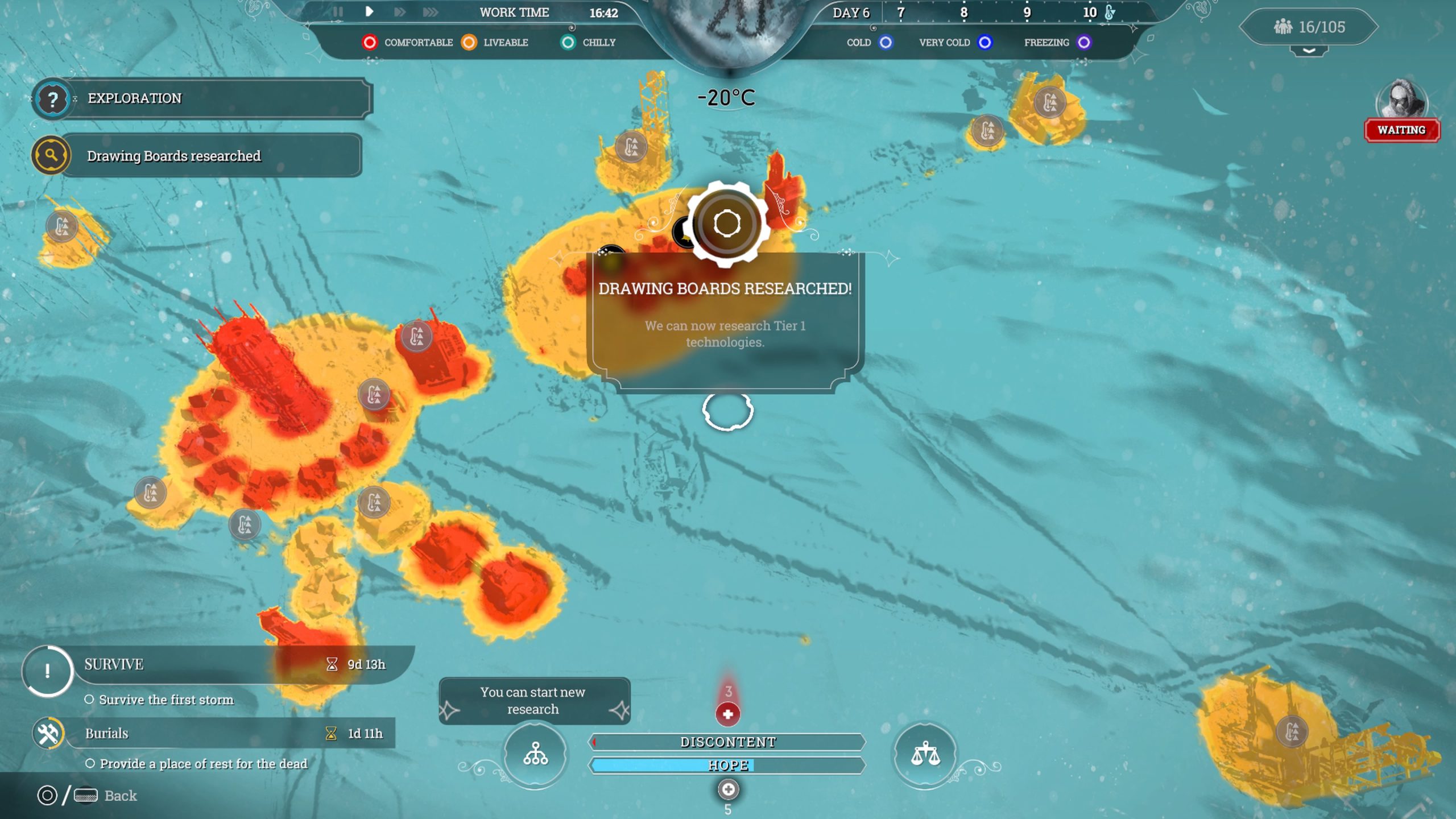 The promise for more shelter was fulfilled the next day but during the night, the first death occurred and I was asked to sign a new law to build a cemetery. This sounds like a great thing to do right? Well, a cemetery also causes people to bury their dead and visit their dead, meaning they don’t work and gather precious resources needed for survival during times in the workday. I built the cemetery anyway and discontent lowered, but now I was strapped for resources and a timer was ticking down for a storm approaching. 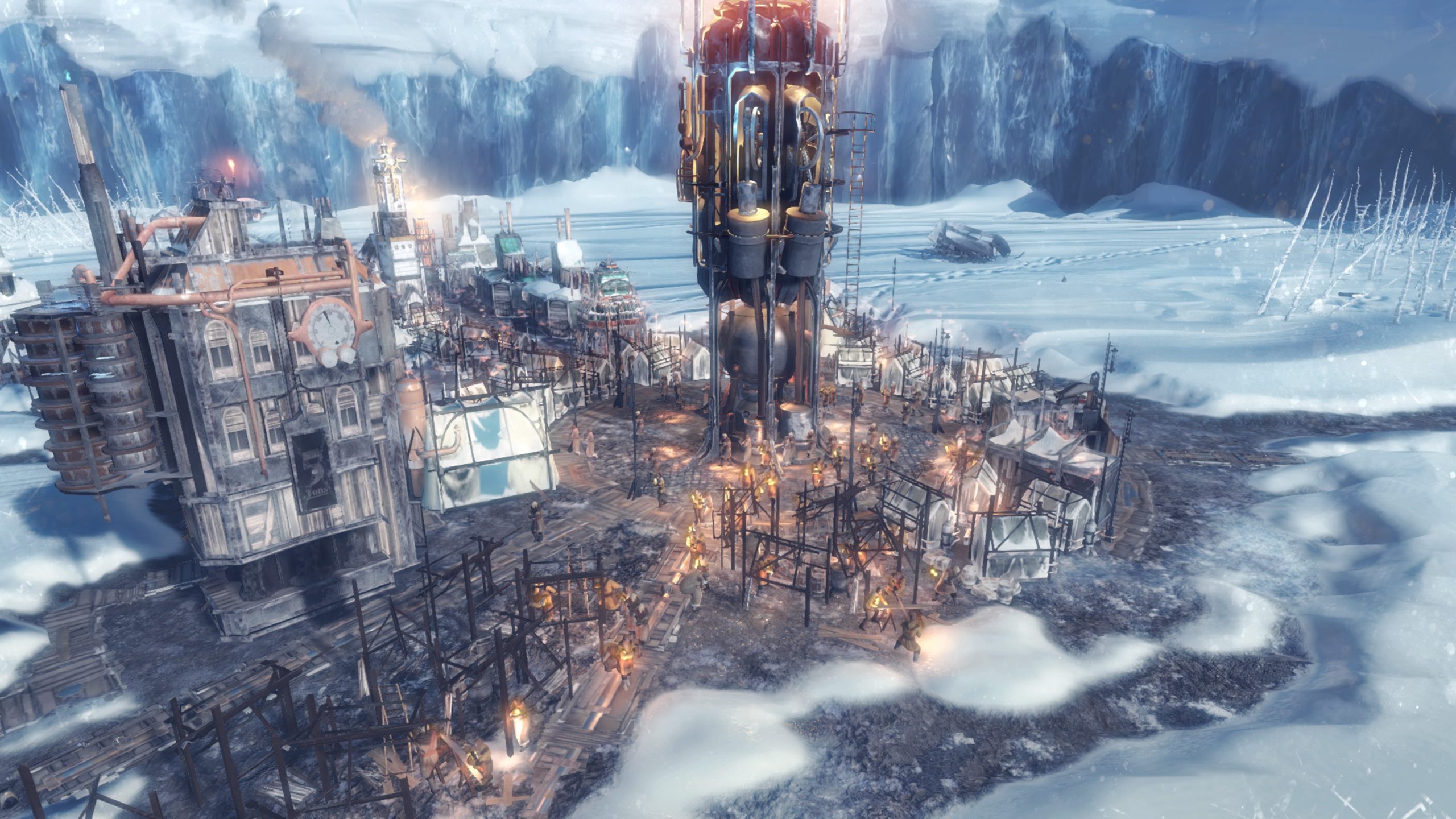 That’s when I signed the Child Labour law after much deliberation. The work was pretty safe but it could still lead to deaths from accidents, which it did, causing a lot of discontent among the people and some of them even started leaving, but it was necessary. That’s what makes the game both depressing and intriguing, as it provides you with nearly impossible decisions to make that can and will keep you up at night.

In Frostpunk: Console Edition, frostbite is also a big killer and because every life matters, I signed a law to amputate limbs instead of letting people die. These amputees would then be (and I hate to say this) a burden on my society as they couldn’t work and required extra treatment. However, I couldn’t let people die, but just a few days later, the first amputee suicide occurred. 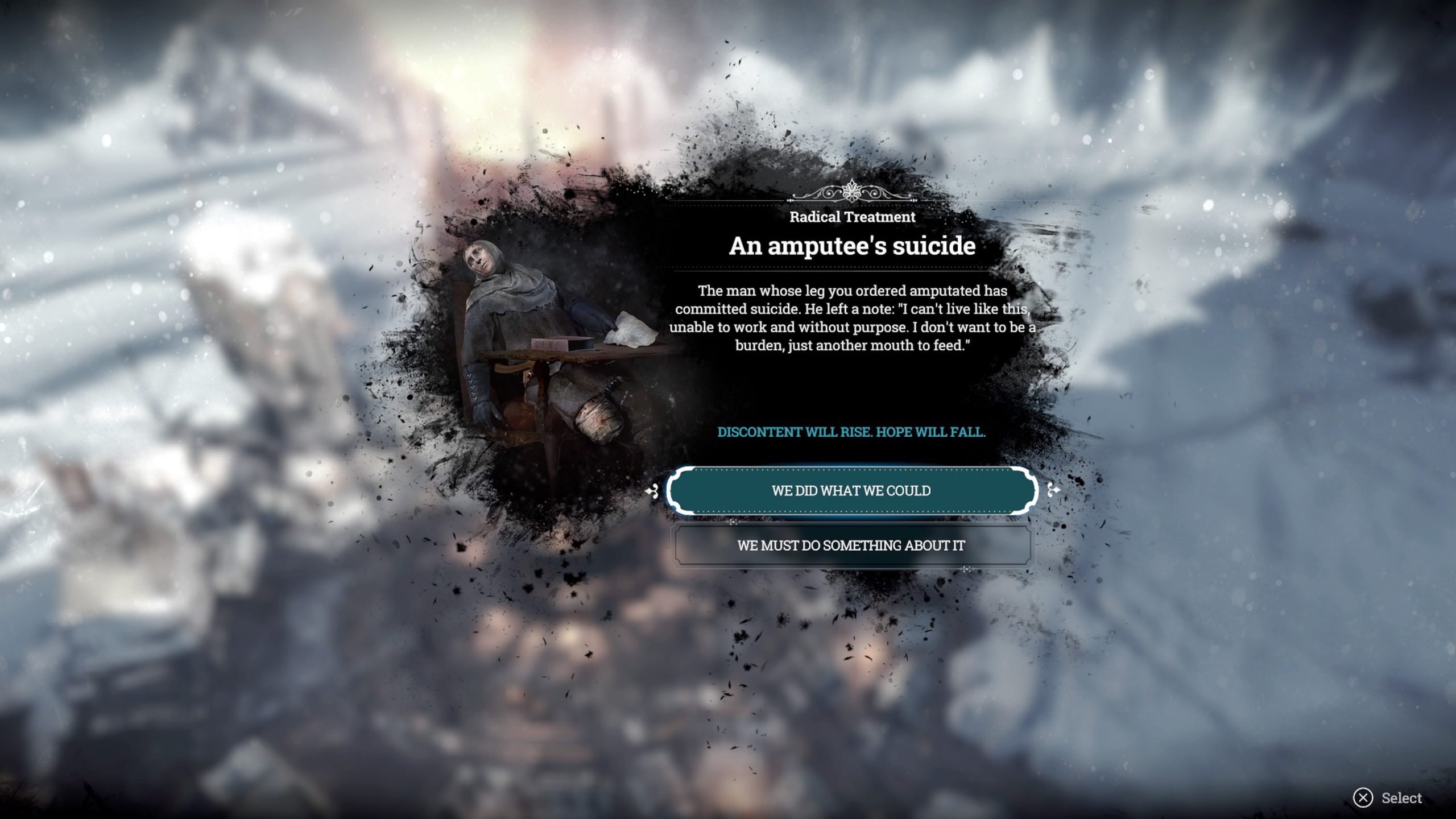 The crowd started to question my judgement as I continued to expand, research new technologies and even send out scouts to look for more survivors and resources. I researched new ways to improve life, from heaters to bunkhouses with which I upgraded my tents, but the hope of my people kept falling as they continued to lose loved-ones to the cold.

Building a religious sanctuary helped alleviate those concerns, as I opted to go down the religious route this playthrough instead of guard towers to keep the population in check. 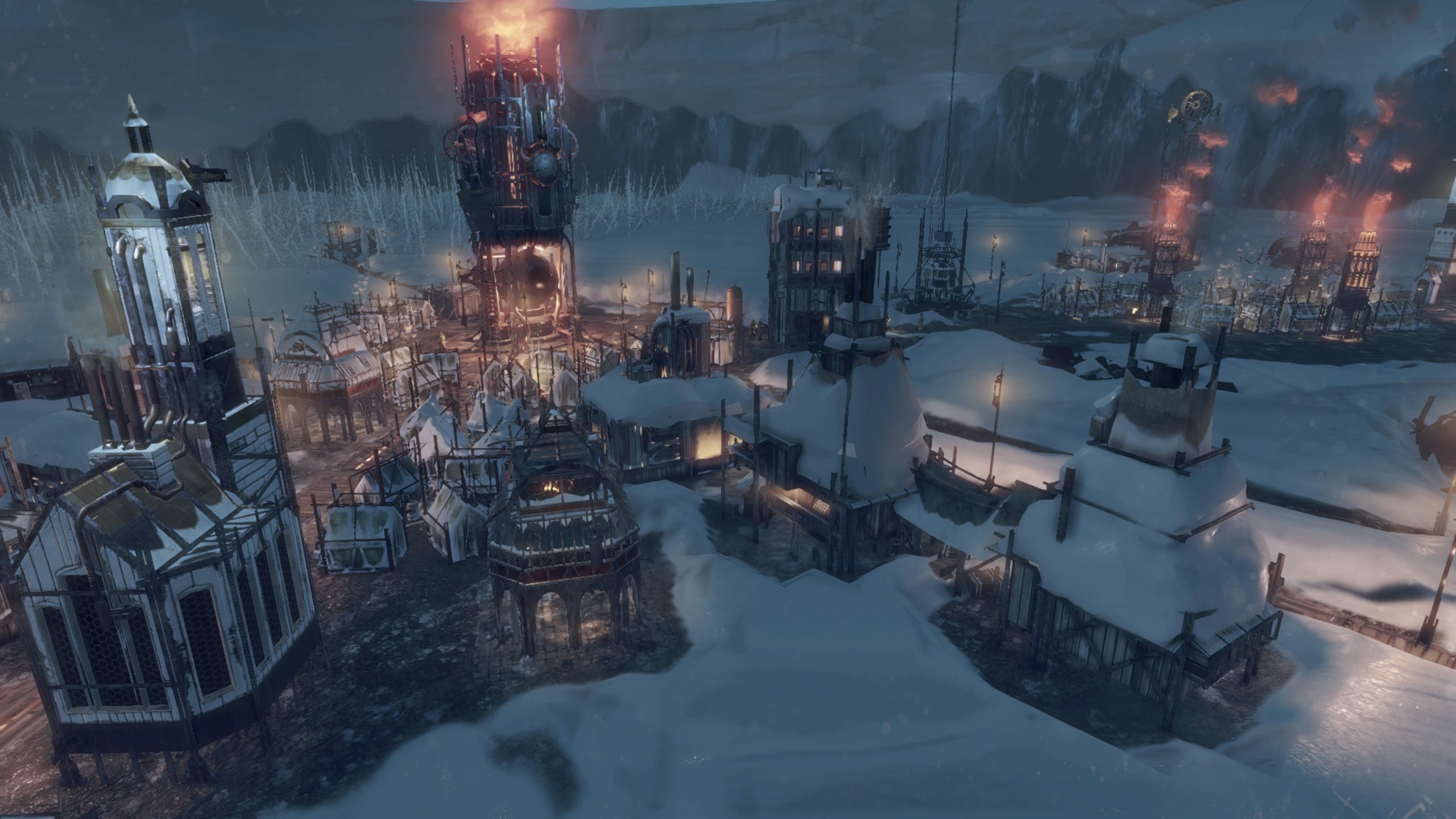 But there was still a storm on the horizon. A few days before the ice storm of death was supposed to hit, I checked the heat of my city, made sure we had enough food and coal stockpiled, everyone had a roof over their heads and I researched generator upgrades so I can push the massive generator further, extending its range to warm more people. I also called back my scouts who were exploring out in the cold, and they made it back in time. 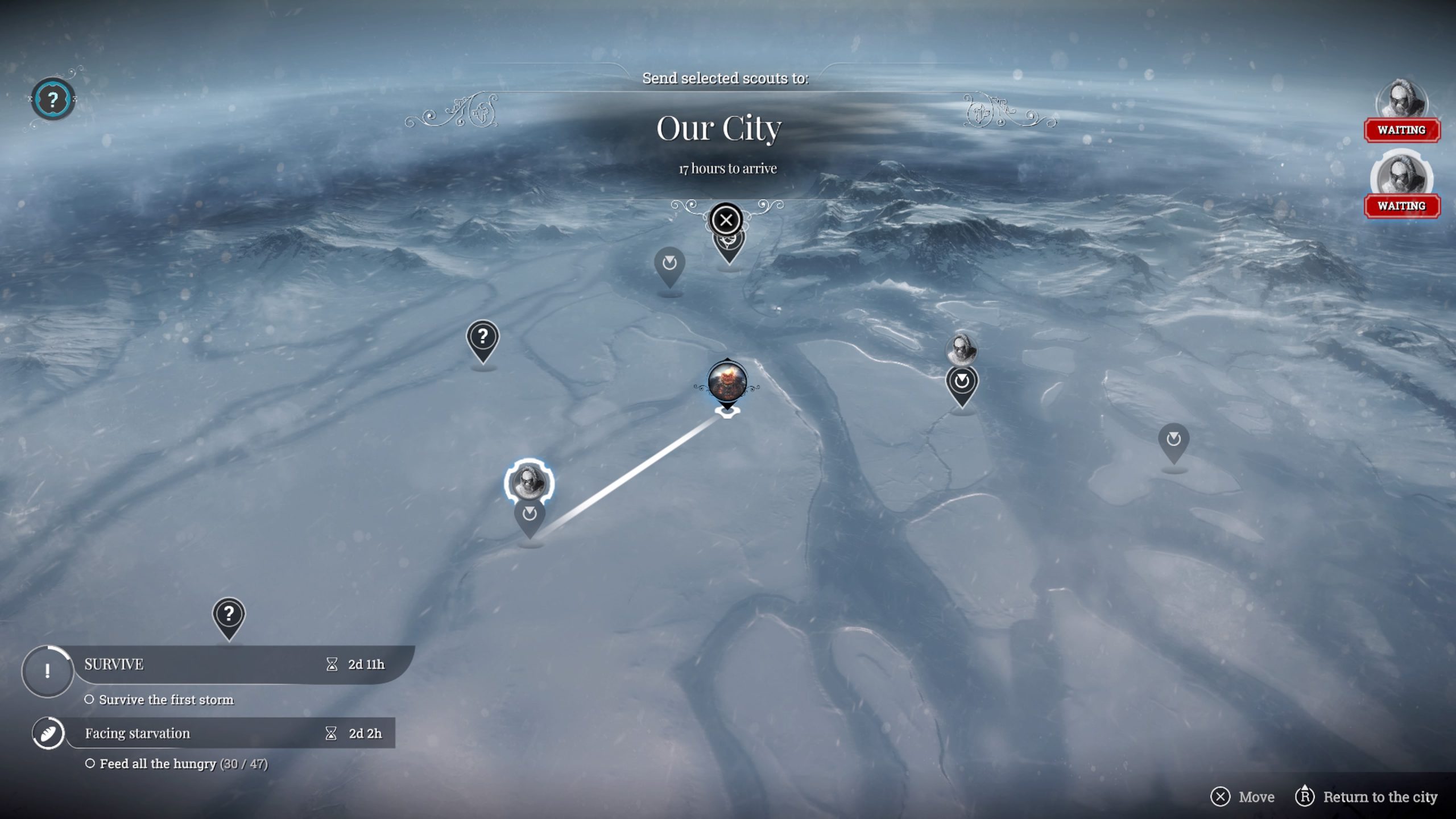 The storm finally hit and I was prepared. The people were a bit angry at me at this point and hope fell, as everyone thought the storm would be the end of our society. It wasn’t, but my next decision was. The storm lasted longer than I anticipated and resources were running low, but I decided to only send out workers for coal needed to keep the warmth up as people could survive a day without much food.

With some renewed coal supply, I turned up the generator to its maximum to stop more people becoming afflicted by frostbite, as the medical posts were overrun at this point. 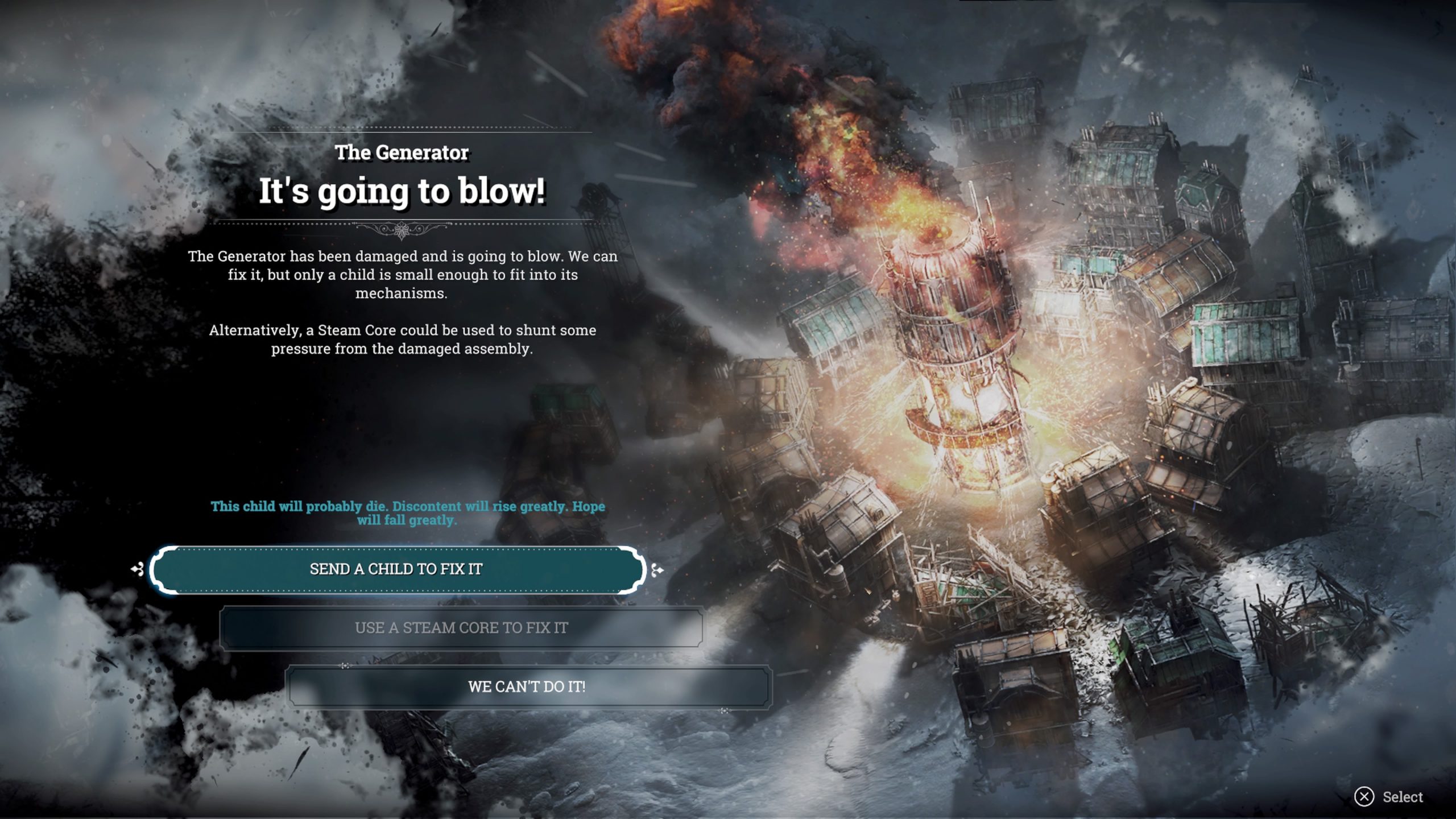 Hope fell and discontent raised among my people, but to make matters worse, the child wasn’t successful in fixing the issue. 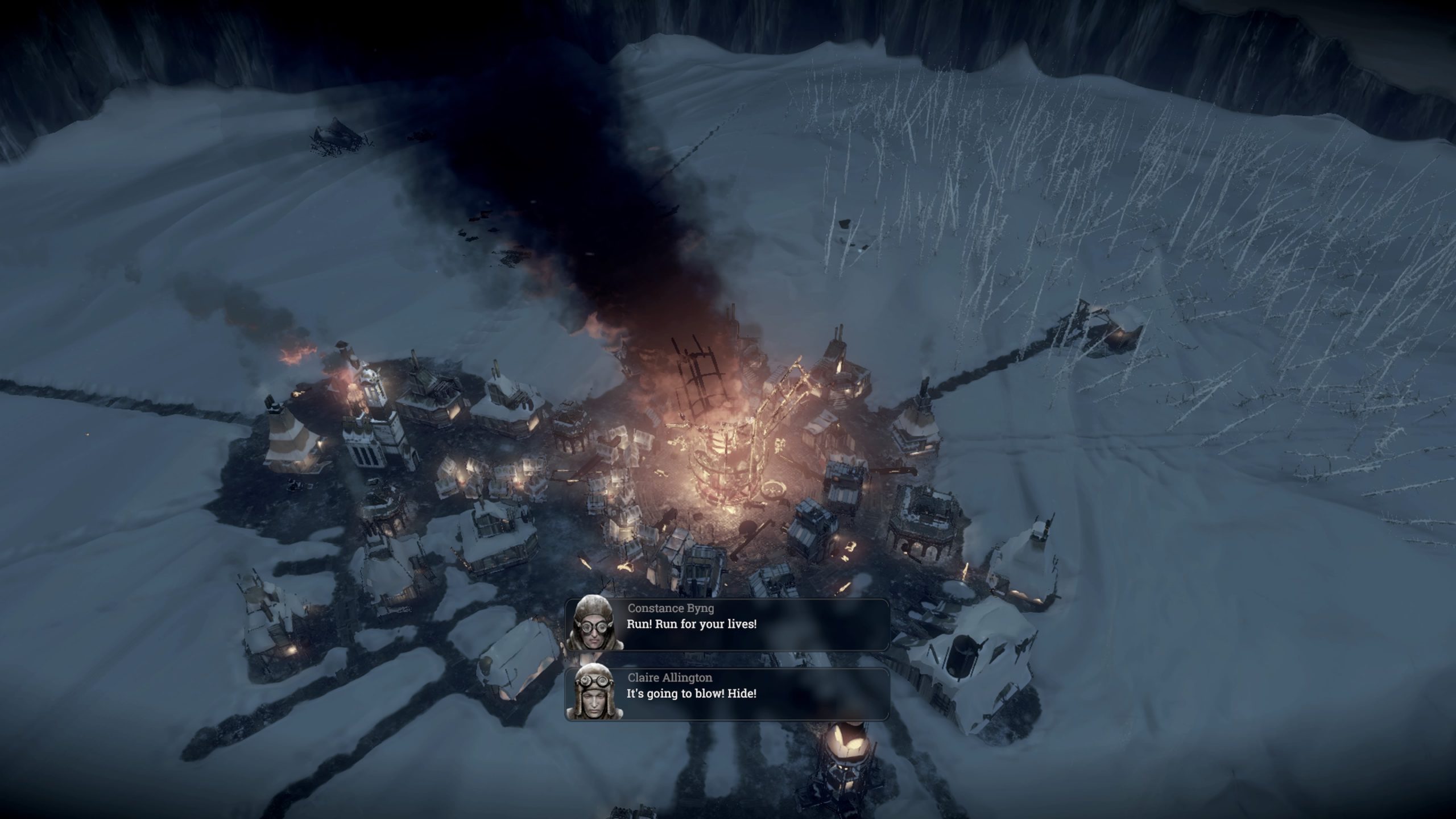 The generator blew up anyway, killing my whole population and my journey as the captain ended in tragedy.

Technically, Frostpunk: Console Edition from 11 Bit Studios was solid during my review period. It doesn’t look as good as the game does on a high-end PC, but it still shines. The only issue I ran into was that sometimes when zooming out or panning the camera around, I did experience some FPS drops on the PS4 Pro, but that was also when the game’s speed was set to maximum, so it isn’t that big of a deal.

Frostpunk: Console Edition is more than just a port of the PC version, as the controller support, built from the ground up, shines through and really made me feel as if I didn’t need a mouse and keyboard to enjoy the game. It has all the extras that came after launch for the PC version, including an endless mode with two choices, city building or survival. It has an interesting story and campaign, but the best part of Frostpunk: Console Edition is the journey and what you do in those extremely difficult situations.

It is up to you to decide how you will rule the last city on earth and what sacrifices you will make so humanity can survive. 11 Bit Studios throws you into extremely difficult scenarios that will keep you up at night. It is depressing, brutally difficult and yet, I couldn’t stop playing it. The game is, without a doubt, the best city-building or survival title on consoles to date and deserves every bit of praise it gets.

This Frostpunk: Console Edition review was based on a review code sent to us by 11 Bit Studios