Everyone who is anyone has heard of Guitar Hero. Harmonix, the studio behind the original series created the popular music game and it changed the way users interact with music. For the most part, Fuser sets out to do the same thing. Instead of a plastic Guitar, it is all built into one package and aims to be less of a game and more of a musical experience. Fuser is about being the DJ you have always wanted to be. While it all comes across quite intimidating at first, the more I played it the more I began to understand the “art” of throwing a bunch of discs on a record player and making them all sound great at the same time.

At first, I just randomly chose songs, stage lights and fancy smoke to shoot into the air. However, a few days later and I found myself carefully choosing tracks to their beats and lyrics and how they would sound combined together. It is almost as if I gained the ability to mix music in my head and predict the outcome. How this happened is beyond me. Fuser is not only a triumph in music creation but also taught me so much. Not to mention I had a damn good time doing it even if I annoyed my neighbours at 11 pm at night.

For those of you who have ever experimented with a DJ app before, Fuser is not that. Instead of just throwing a track on a dial and pressing play Fuser dissects each song into its sounds and let me choose from this throughout my party. However, there’s so much more here to enjoy which helps carry the game to the point of being addictive. Building up a collection of songs relies on levelling up my DJ by performing gigs and doing well at them and hosting a party is all about the visual flair that goes along with it. The campaign is a great place to learn the ropes and I was surprised to see how quickly the challenge spiked in the later chapters. The base game also includes 86 songs and there’s a VIP edition with an extra 25. This is a massive roster of tunes and the genres span some popular ones too. Of course, the majority of the music is based on EDM and hip-hop which makes sense. I could never see myself partying in a Tomorrowland crowd to rock music. However, I was surprised to see a good selection of some pop, rock and R&B.

The music is also not just from random people. I knew almost all the songs including Dua Lipa, Sia, 50 Cent, Whitney Houston and more. There’s so much variety here to enjoy that even jumping into a Free Play mode to mess around was better than launching my Apple Music app and listening to my own music. This all combines to make the gameplay in Fuser feel and sound so great. 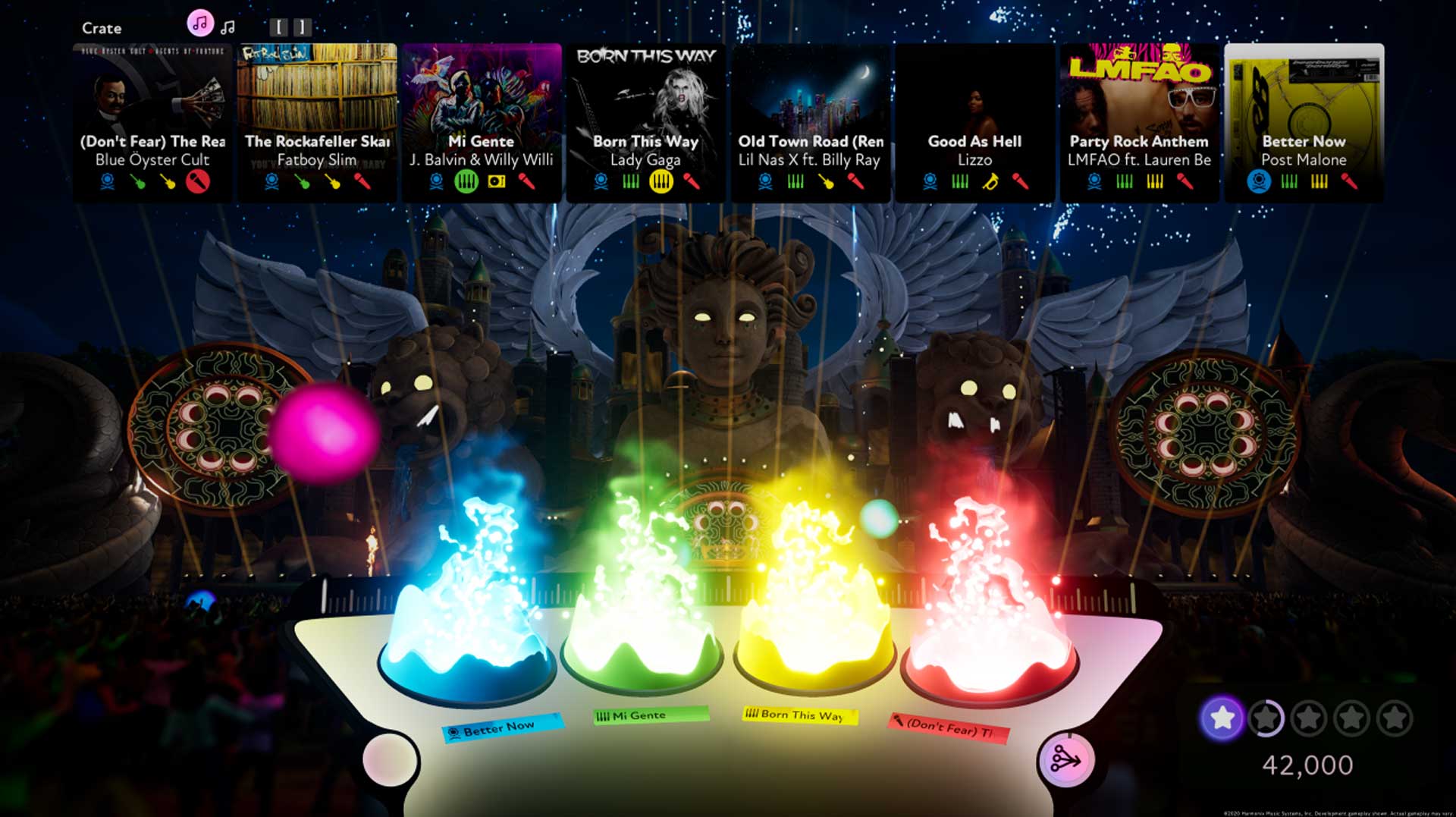 Fuser can totally be a killer app on its own without the campaign and “gaming” side of things. At first, I was concerned about how simple the tools were but after a few days of discovering new tricks, I often struggled to keep my head above it all during a set. There’s a lot of depth here which takes some time to master. Thankfully, a playthrough of the campaign is all you need to learn it all. In short, the campaign revolves around you being a no one. You meet some cool people in every chapter that give you a chance at proving your skills in front of a massive crowd on a rather extravagant stage. Here, I unlocked new cosmetic items to wear while I played, new songs to add to my set and new ways to play music by discovering even more tools to available on the DJ deck.

I started out small and basic with the ability to change songs on my set and by the time I finished the campaign I mastered when to “drop” specific tracks depending on the beat, how to stack songs and get them ready to drop at a certain time and even alter the BPM. There is so much here to fiddle with and every time I thought I knew it all, something new popped up. It may sound daunting and it is. However, the game eased me into it al quite well to the point where I felt confident enough to take on other players online. The best of all, every feature in Fuser and has been implemented so well that the game stands as its own DJ tool. 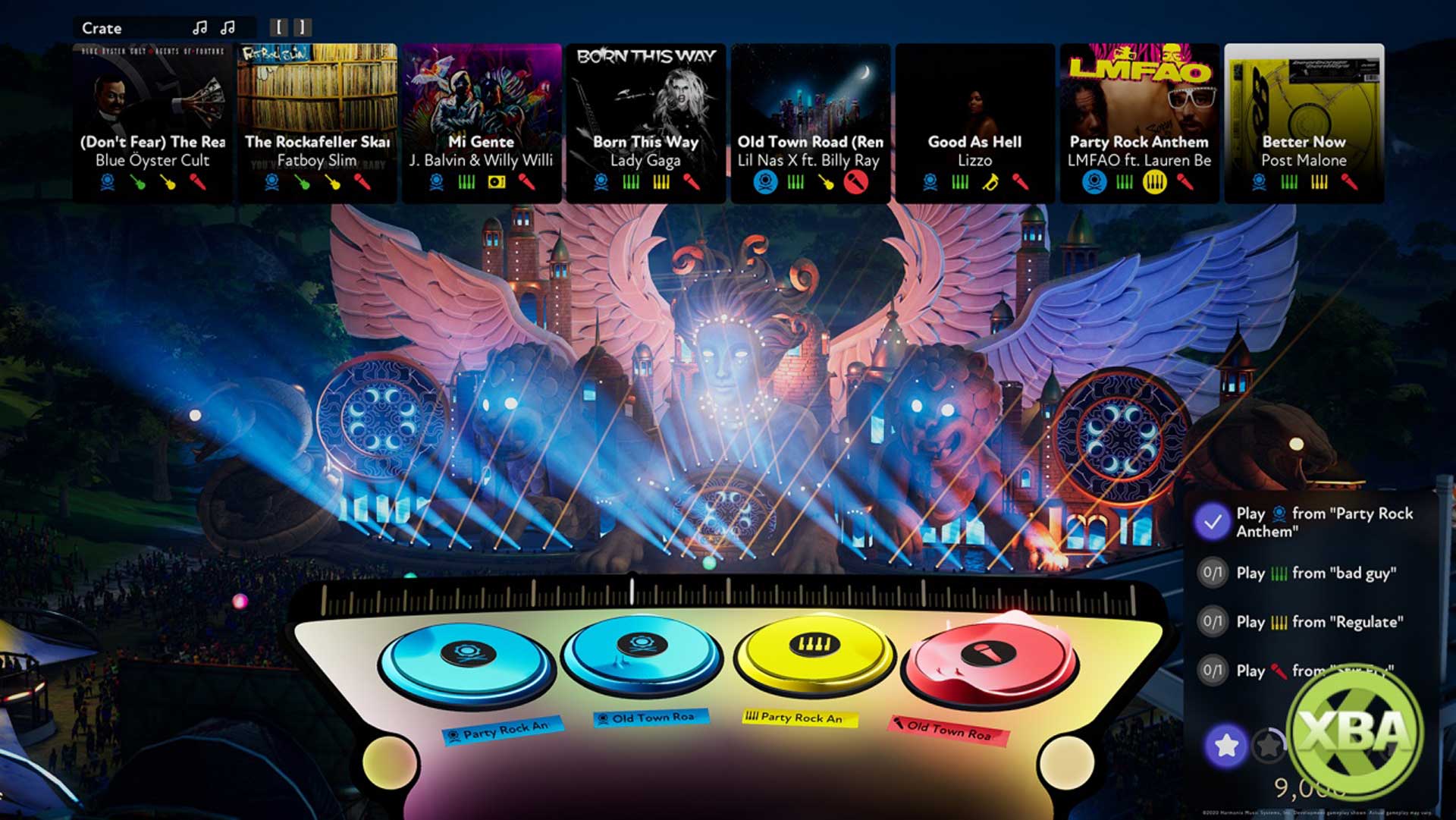 Don’t get me wrong, I am sure actually being a DJ is tough and the equipment is complicated but Fuser makes this fun and “easy” to a certain point. At the start of a stage, I had to choose a set amount of tracks to take with me. If it was a pop stage then I picked some pop tunes but also added some variety with RnB. I could alter the visual effects of the party by changing screen visuals and even the smoke. While these don’t impact gameplay, they were a nice touch especially when I was in the moment vibing to my own cool mix.

The party starts and that is when my fingers went to work. There are four slots to place music down. Songs are divided into four instruments too so if I wanted the vocals from “Push It” I would press circle or hold it down to drop it on the rack. If I wanted the beat from “Me Too” I would use the square button. In Fuser, everything relies on timing and the beat. This meant dropping a new vocal replacement of Push It had to be done when the beat timer hit a certain point. Sure, I could have done it any time but the crowd would not be pleased. It also just sounds so much better when things work. I slowly became obsessed with it all. Choosing the right song to replace another, what beat to use and even how to fade into my party with style. 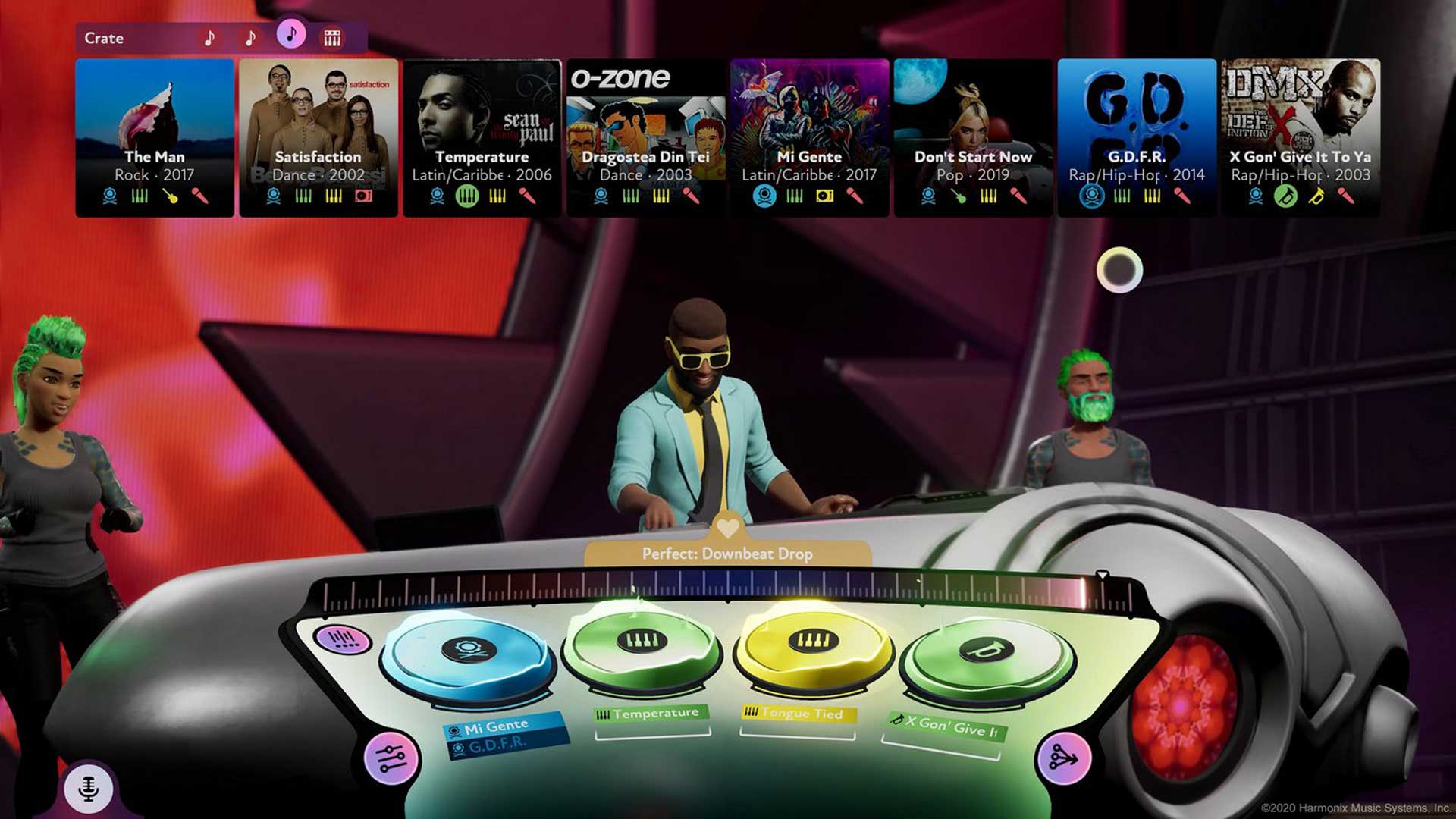 I then mastered muting music, placing multiple beats down alongside one vocal track and even overlapping two vocals. It is madness the amount of freedom I had in Fuser to experiment and have fun. Before I knew it, the game was no longer helping me and I had all the responsibility. I had to juggle requests from fans wanting to hear a specific song, keeping the rhythm up and constantly changing songs around so people don’t get bored. Not to mention every other tool which is available on the DJ set.

I also have to praise the game for how well it manages to make things sound for tracks I would have never put together. “Never Gonna Give You Up” and 50 Cent’s “In The Club” might not sound like a great combination but believe it or not it is. There were seldom times where things sounded off and most of them were because of my chose of a beat. Even after spending days with the game, I still make questionable track choices but I don’t care. The game allows for the freedom so I might as well experiment. Outside of the music, Fuser includes a range of modes to enjoy too. The campaign is a massive tutorial but it is needed. There’s also freestyle which is where you can get lost in. Here I was free to do whatever I want and use all the skills I picked up during the campaign. It is basically the place to just sit and enjoy music. You can also create music with your friends in co-op and there’s a battle mode for online play. Players can go 1v1 against each other and need to perform sets better than the other player. I can see music addicts jumping into this quite fast.

So if Fuser fun? Most definitely. Outside of it being a pretty game to play it is also something so wholly unique that I don’t see anyone touching it any time soon. There’s nothing else like it and it should own that. Underneath the flashing lights, there’s a well-programmed app here that is the beating heart of the experience. This alone is a triumph.  However, there’s also the price and the future of the game. Fuser is pricey and costs the same as any other triple-A game on the market. There’s also the promise of future content which will also cost more money if the Guitar Hero series is anything to go by. Sure, the base game is loaded with content but the songs will die out after a while.

I do hope that the game does well. It deserves it. Music games are nothing new on the market and this is an exceptional one. If Harmonix can release a steady stream of content and keep players coming back for more then good. At launch, Fuser is a great investment for anyone who enjoys music and needs a break from shooting and killing.