The Game & Watch: The Legend of Zelda device marks Nintendo’s second release for the accessory range. This is after Nintendo released a Super Mario Bros. version last year. The new model is a love letter to not only Legend of Zelda fans but also gamers who grew up playing with Game & Watch devices.

If anything, the new Game & Watch: The Legend of Zelda model feels like a greater step in creating a portable gaming device thanks to not only the lineup of games included in the package but also the amount of love poured into the localised versions and games on offer. There are three games on the device but they also include alternate Japanese versions so in total you get seven games here. One of which is the Vermin Game & Watch game.

What’s in The Game & Watch: The Legend of Zelda Box?

The Game & Watch: The Legend of Zelda packs quite a premium unboxing experience. On the outside, there’s a clear plastic sheet with some Zelda artwork that slides onto the box. Once aligned, the Zelda game art fills the Game & Watch screen. The box itself is gold and classic to the original range. Inside, there’s the device itself wrapped in a protective paper. You’ll also be greeted by a USB C cable hidden inside a TriForce compartment. There’s also some instruction documents and a Nintendo Store point card. 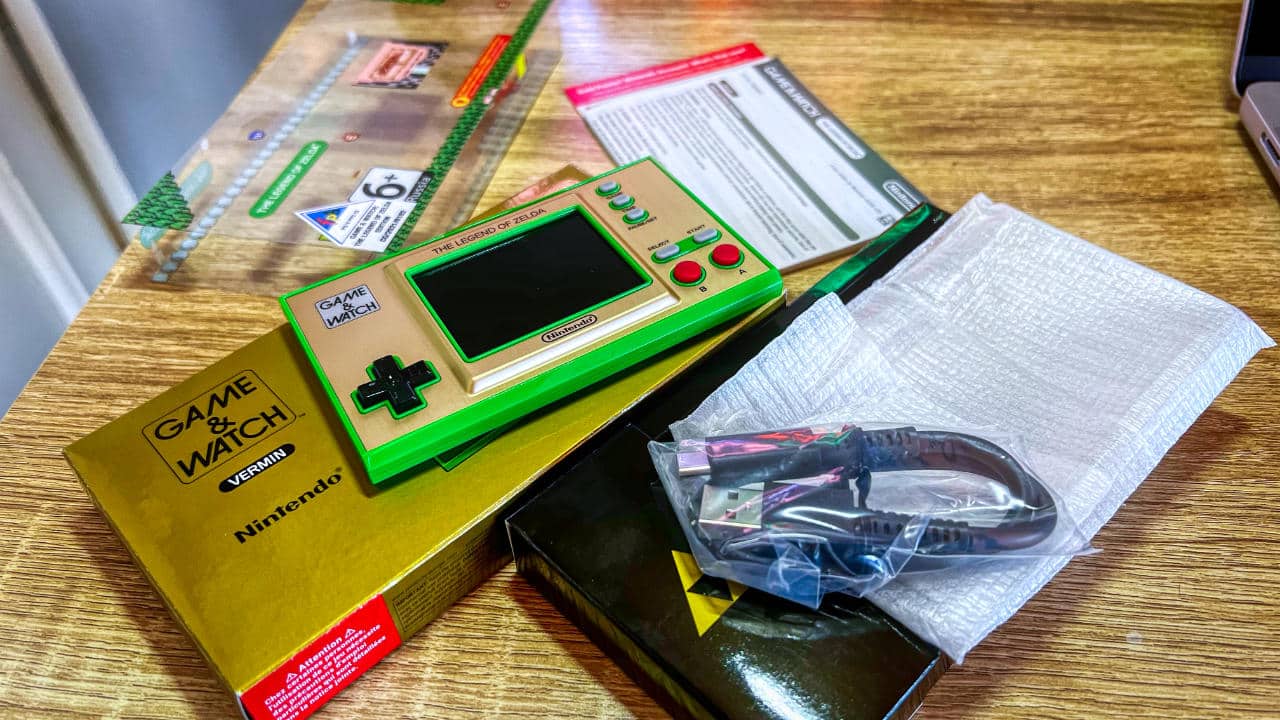 The black slide-out insert also doubles up as a holder for the device. Given that the Game & Watch is an actual clock, this lets you prop it up on your desk or table so you can always see the time. Sliding out the back flaps and clipping them into the sides helps create this prop.

There isn’t much going on with the Game & Watch: The Legend of Zelda when it comes to the design but I don’t think it matters. The overall casing is nostalgic from head to toe. The buttons replicate an old-school Game & Watch device and if you had to travel back through time to the 1980s and carry this around, people would think you have an average Game & Watch with you. 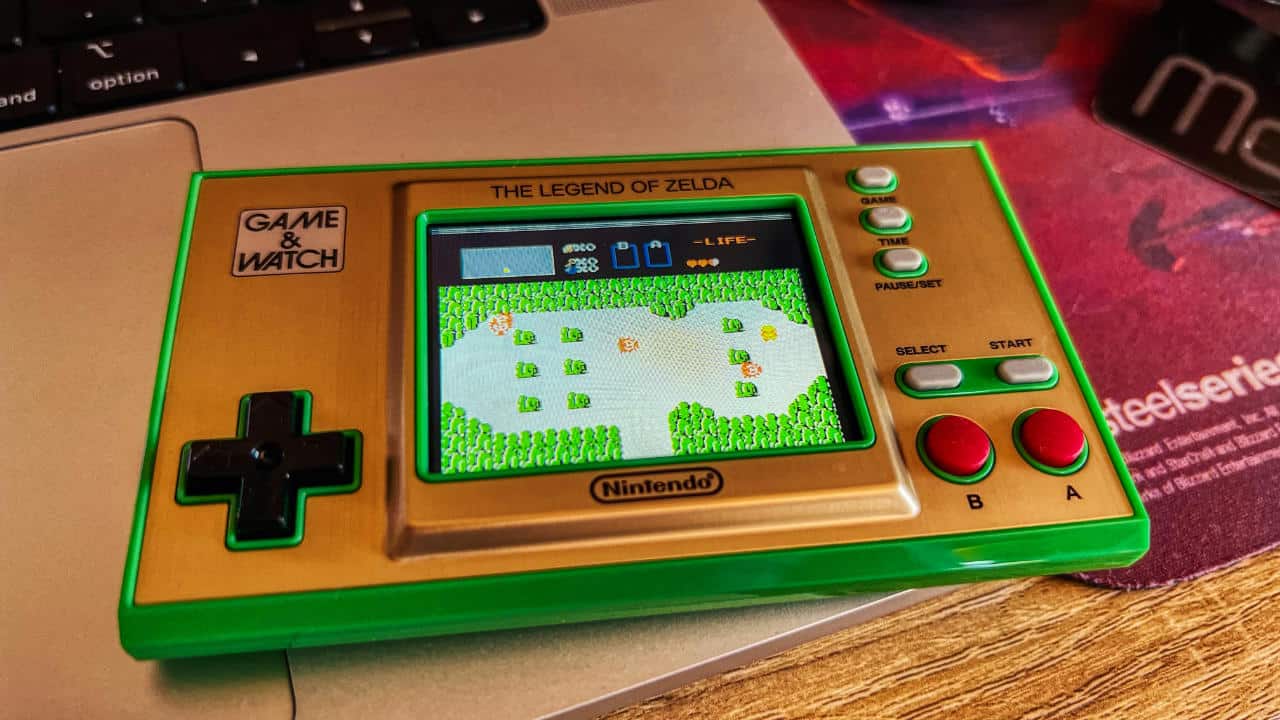 The casing is green with a gold sticker on the front. On the back, there’s a light-up TriForce symbol that glows. I absolutely loved this little added design feature. The display on the Game & Watch: The Legend of Zelda is 2.63-inches which is pretty small but it is bright and vibrant. There’s also a small speaker hole on the one side that helps emit the sound from whatever you’re playing. On the opposite side, there’s the USB C charging port. You can use any USB adapter for this and even use a notebook USB port or the Switch USB port to power the Game & Watch: The Legend of Zelda.

Game & Watch: The Legend of Zelda Performance and Features

For the most part, the Game & Watch: The Legend of Zelda is a clock. You can set the time and have Link run around on the screen as the time ticks away during the day. The basic clock face called Playtime Clock sees Link run around and kill enemies while exploring classic The Legend Zelda locations. The clock is clear and made up of classic pixel art and there’s a ring around the outer rim that slowly ticks away every minute. Then there’s the Playtime Timer that let me set a timer and watch it count down. While it was counting down, Link would run across the screen and fight off enemies. This timer is designed after Zelda II: The Adventure of Link. When the timer ends, Link would then raise his arms and collect the TriForce energy that made up the numbers.

From a clock point of view, the system works pretty well. The sounds might get annoying if you’re working or studying but you can mute them. If the sound effects aren’t your thing then you can also hold down the A button for five seconds to turn on a Zelda song instead. This replaces the ticking with music. At any moment on the clock or timer, I could also take control of Link and fight off the enemies myself. 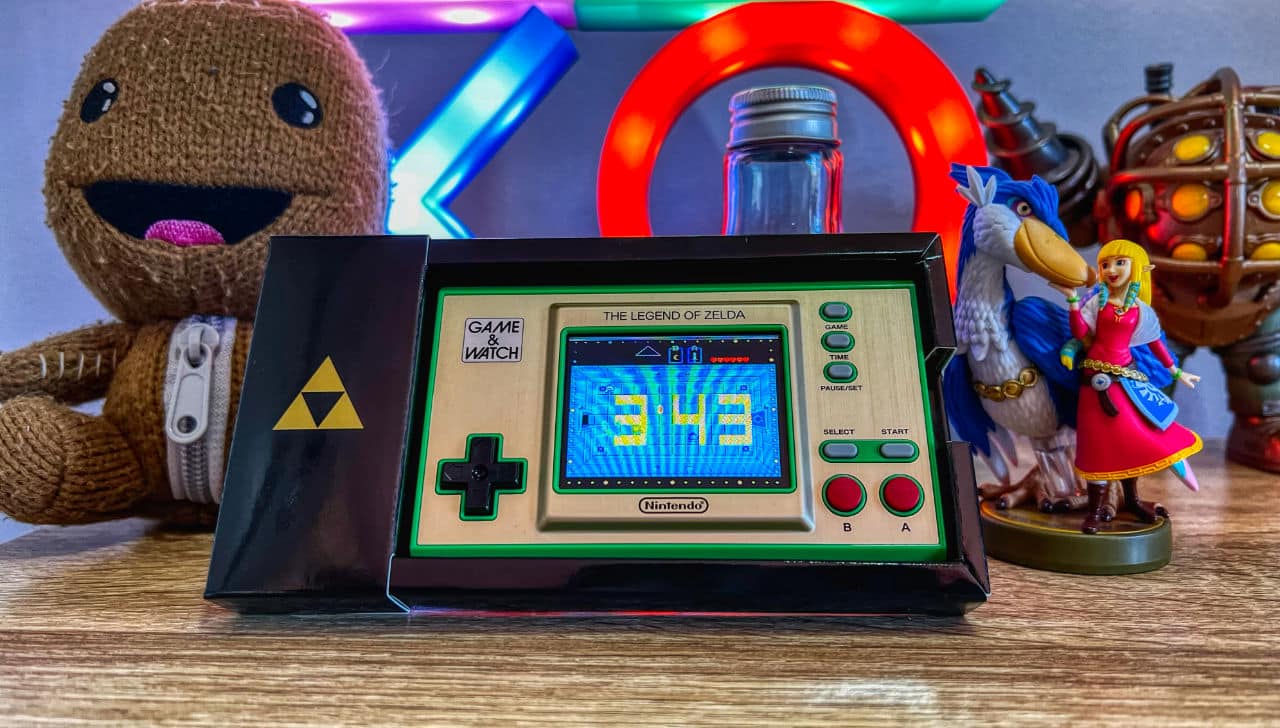 As for the games, there’s a lot to do here. Not only do you have the English and Japanese versions of The Legend of Zelda,  Zelda II and Link’s Awakening but you also have Vermin. All the experiences are fun to play and feel so iconic at the same time. The colours are rich and the games are brought to life thanks to the vibrant and crisp display and loudspeaker. If you’re a die-hard fan of the series, then the Japanese versions will also grant you extra replayability as there are some differences to enjoy here too. Mainly when it comes to the music, sound effects and some items.

The Game & Watch: The Legend of Zelda can run on power through the USB C port but you can also use a built-in battery if you want to. The battery lasts a decent amount of time. I had it running all day at 50% and it lasted just over eight hours. It then took about an hour to recharge back to full. The device also does a great job of saving your progress across all games. In fact, you can jump across all the games instantly without having to save or losing your progress. Even when the battery died, I plugged it in and went straight back into the last game I was playing. 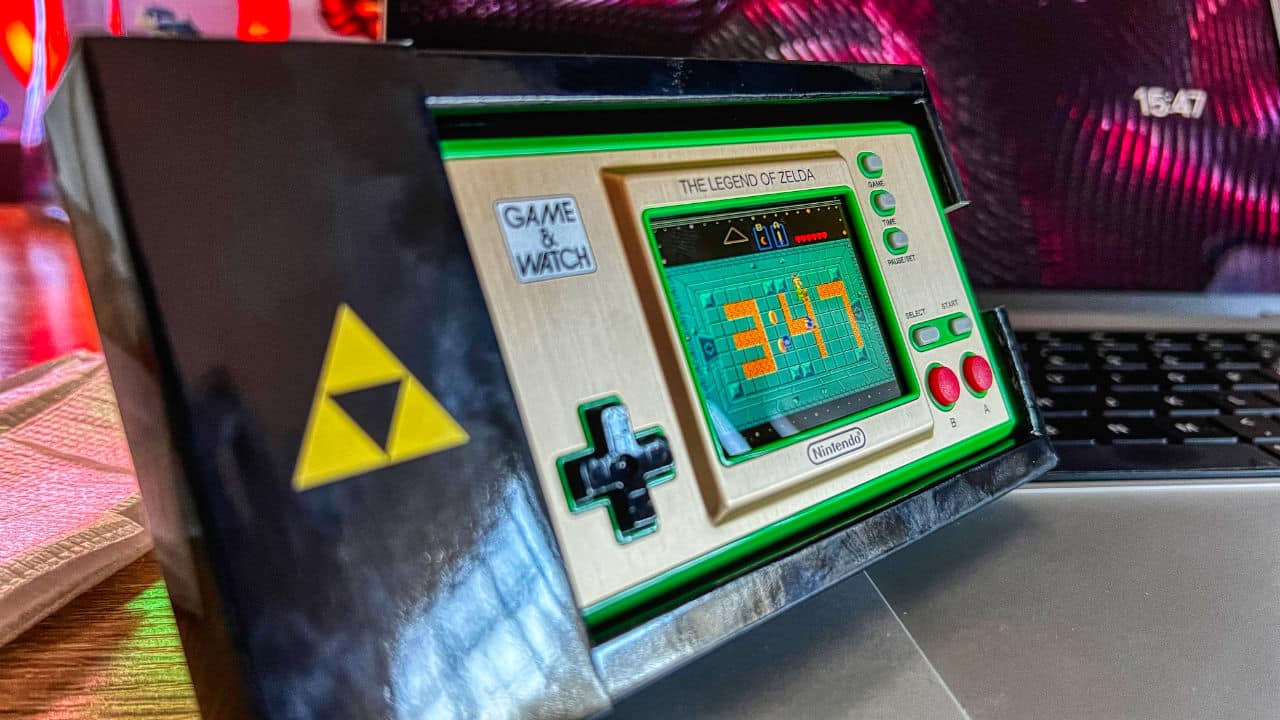 My love for the Game & Watch: The Legend of Zelda comes from how incredibly authentic it feels. The display is bright and crisp and the device is covered in easter eggs and classic Nintendo flair. While I probably won’t use the clock feature much, the games are great and given that I never really played many of these classics back in the day, this device gives me the perfect opportunity to start.

I only had two issues with the device. Firstly, my hands are huge so after playing for a bit, my fingers started to ache a bit. The device is small and the buttons are even smaller. You only really use a few of them at a time so it might not be an issue. My other problem was my review unit had a defect on the display. As you can see from the image below, there are two lines that never went away at the top of the screen. This was there from the moment I opened the box. I got used to them but still quite sad to see. 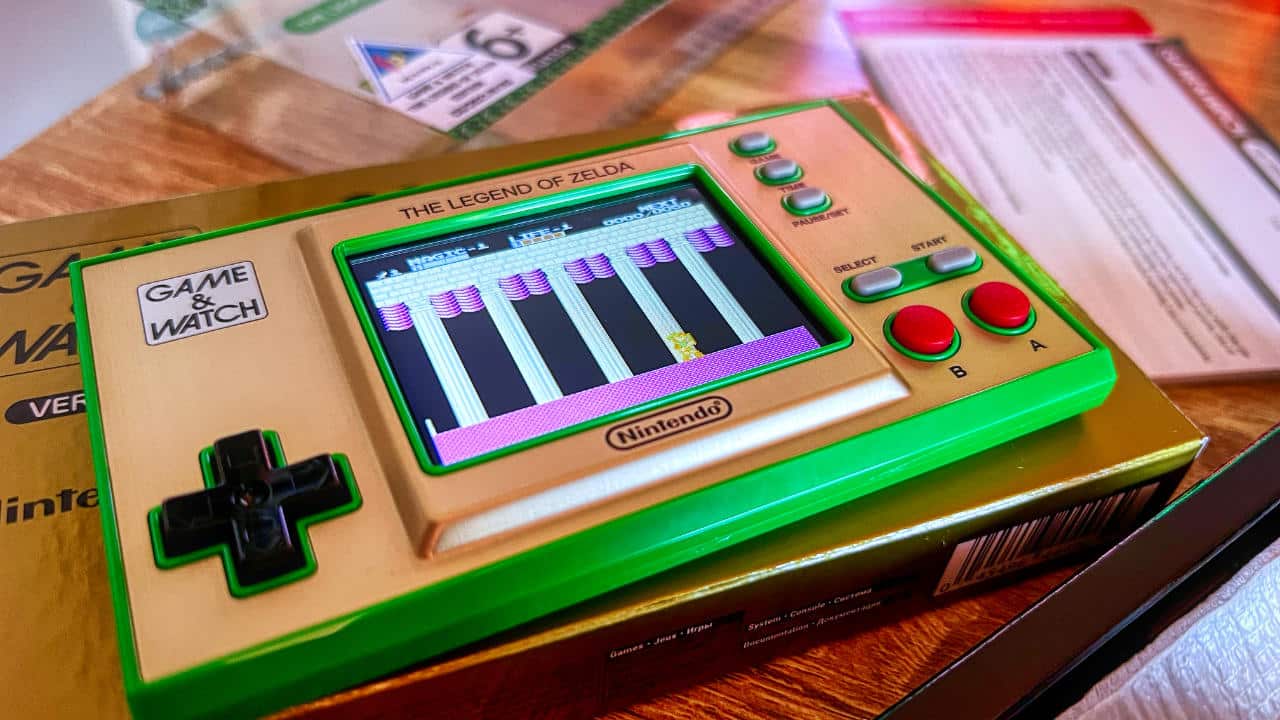 - Hard to use with big hands

Gaming | Nintendo | Game & Watch: The Legend of Zelda Review
a 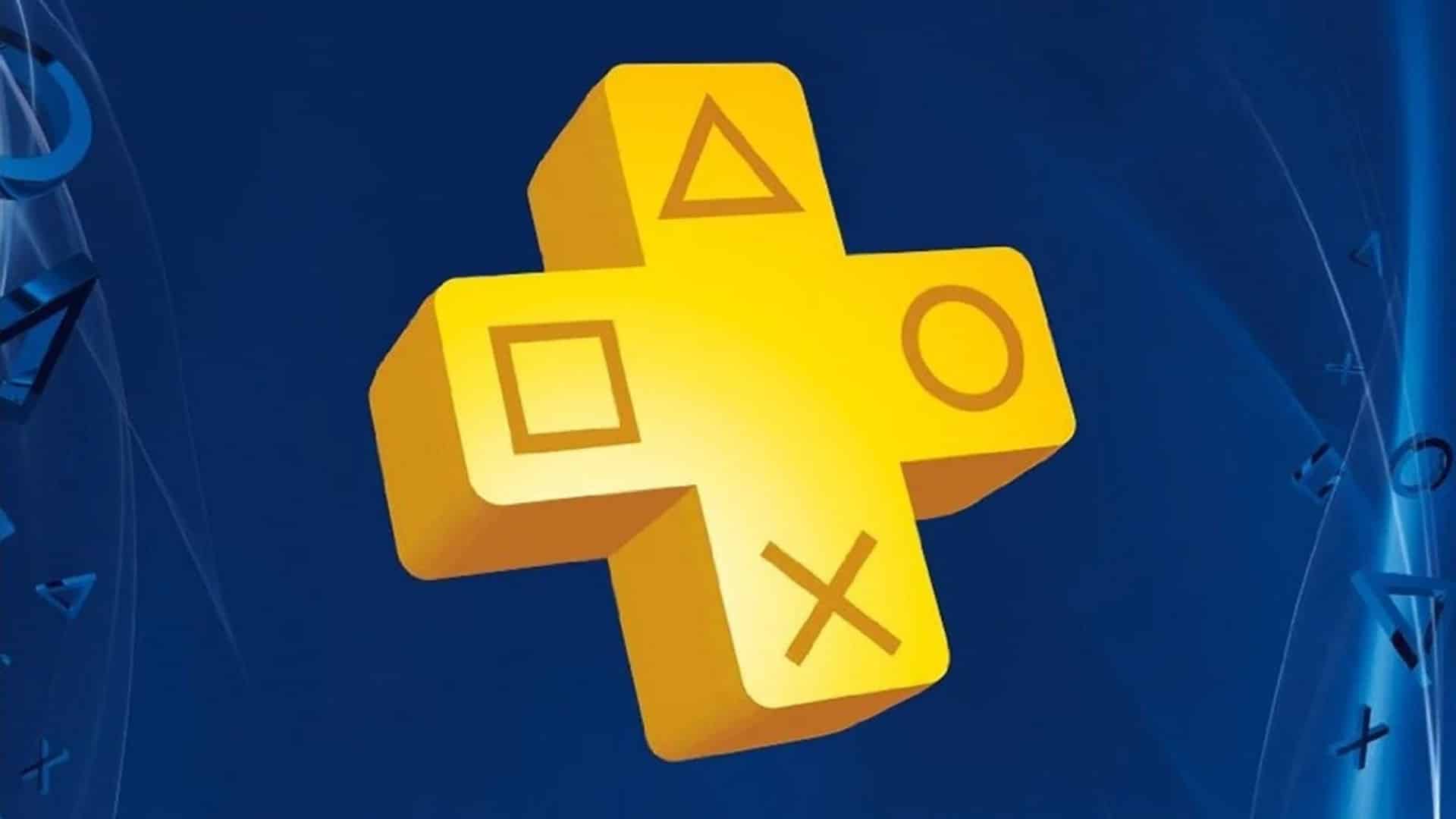 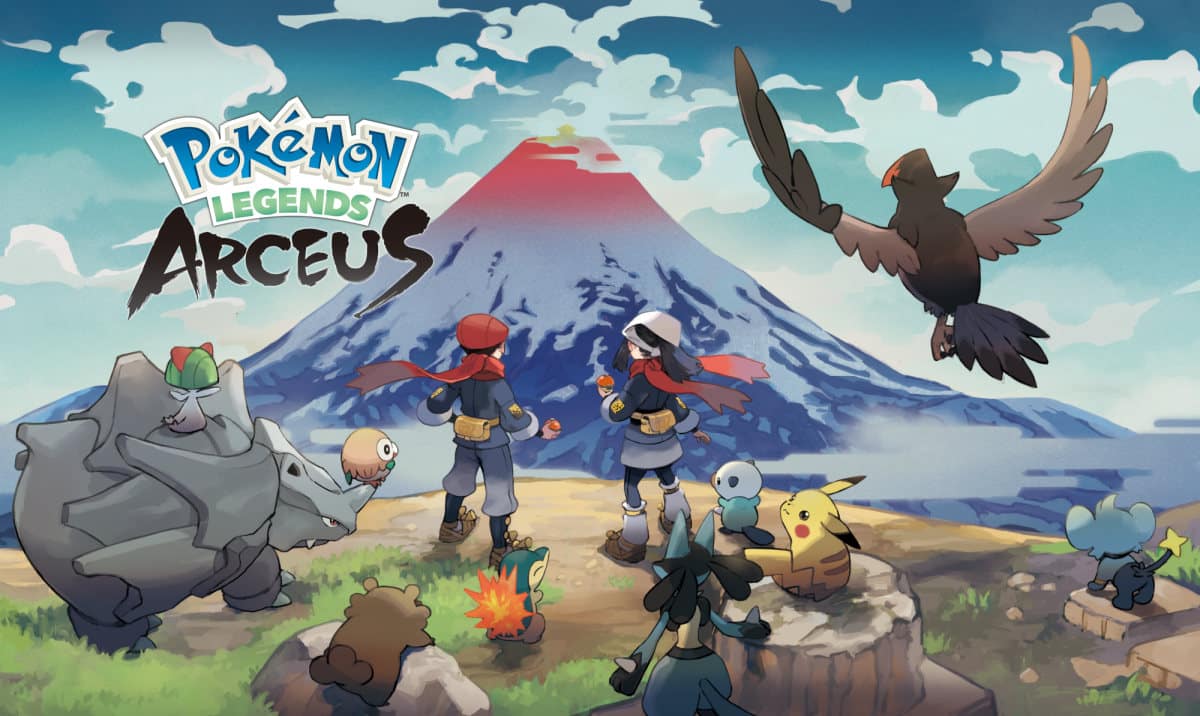 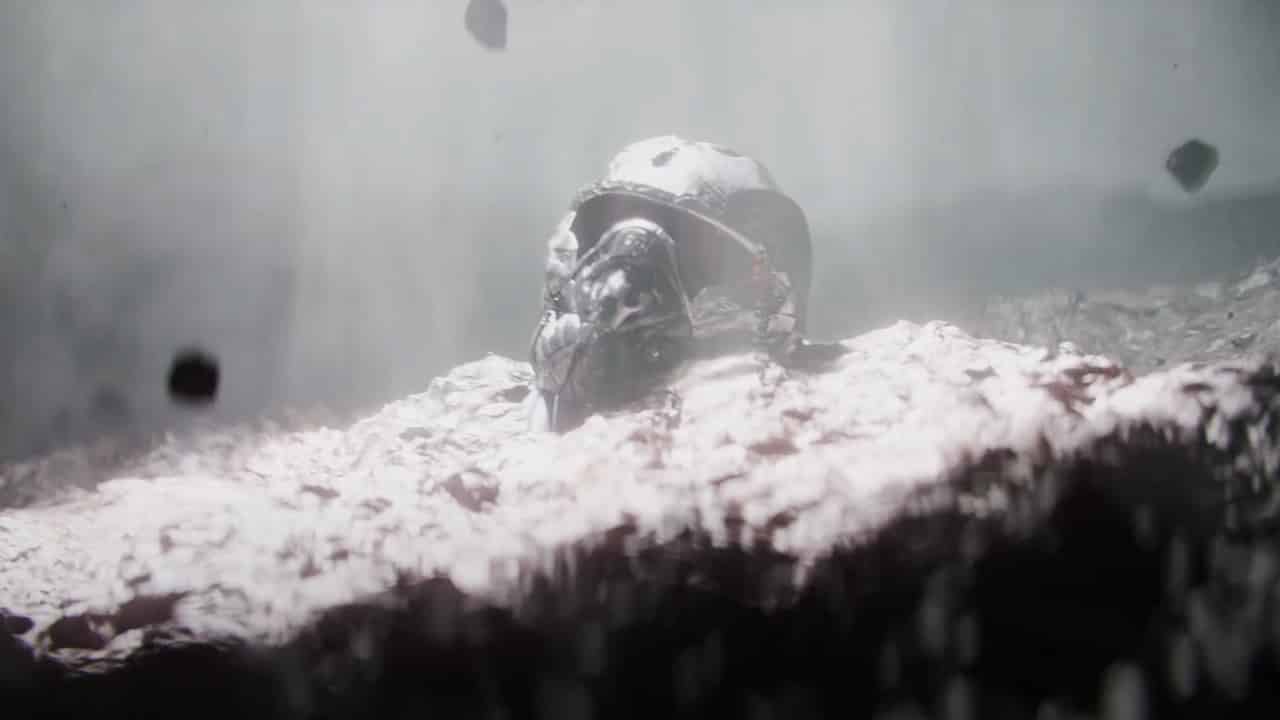