Ghost of Tsushima Director’s Cut Announced For PS5 and PS4
"To Iki Island we go!"

Sony’s worst kept secret has been announced. Ghost of Tsushima Director’s Cut is coming to PS5 and PS4 in August and includes a dedicated PS5 enhanced edition and a robust new expansion set on Iki Island.

For the most part, Ghost of Tsushima Director’s Cut is pretty much the same game. Sucker Punch says the package includes the full experience up to date with minor changes and render modes. This includes all game updates and the co-op mode “Legends”. However, the game also marks a great entry point for newcomers, especially if they own a PS5.

Ghost of Tsushima Director’s Cut will ship with PS5 only features including 3D Audio support, drastically reduces load times, 4K resolution at up to 60fps and of course, DualSense controller support. Players will feel the bow drawback on the triggers and raindrops falling on their hands through the haptic feedback.

One big feature of the PS5 version is the ability to enable Japanese lip sync. Sucker Punch claims that the original game didn’t have this feature and it is not possible to add it on the PS4 version. However, thanks to the power of the PS5, cutscenes in Ghost of Tsushima Director’s Cut are now rendered in real-time. This allowed the devs to create this opportunity for Japanese lip sync.

Players can also transfer their save from PS4 to PS5 so they don’t need to start from the beginning again. Sucker Punch says that access to the Ghost of Tsushima Director’s Cut expansion content, Iki Island, is available after you reach Act 2 of the main game. This means you have to play a bit of the main story to get there.

As for the content in Ghost of Tsushima Director’s Cut Iki Island, players have lots to do. According to the official story, Jin travels to Iki Island to investigate rumours of Mongol presence. He then gets caught up in a very personal story.

If you’re a history buff, you may know that in addition to Tsushima, the neighboring island of Iki was also invaded during this time period. Today we’re excited to reveal that a whole new chapter in Jin’s journey is coming and will take place on Iki. In this new story, Jin travels to the island to investigate rumors of a Mongol presence. But soon, he finds himself caught up in events with deeply personal stakes that will force him to relive some traumatic moments from his past.

New trophies, multiplayer mode, all the game updates and more. Ghost of Tsushima Director’s Cut is a full package. However, you are going to have to pay for it. Sony has listed the game as a standalone edition available on 20 August for $69,99 on PS5 and $59,99 on PS4. Pre-orders come with fancy armour packs, a digital mini soundtrack and an artbook. If you pre-order the game now, you can download the PS4 version of the base game already and play it. The Iki Island expansion then unlocks on 20 August. 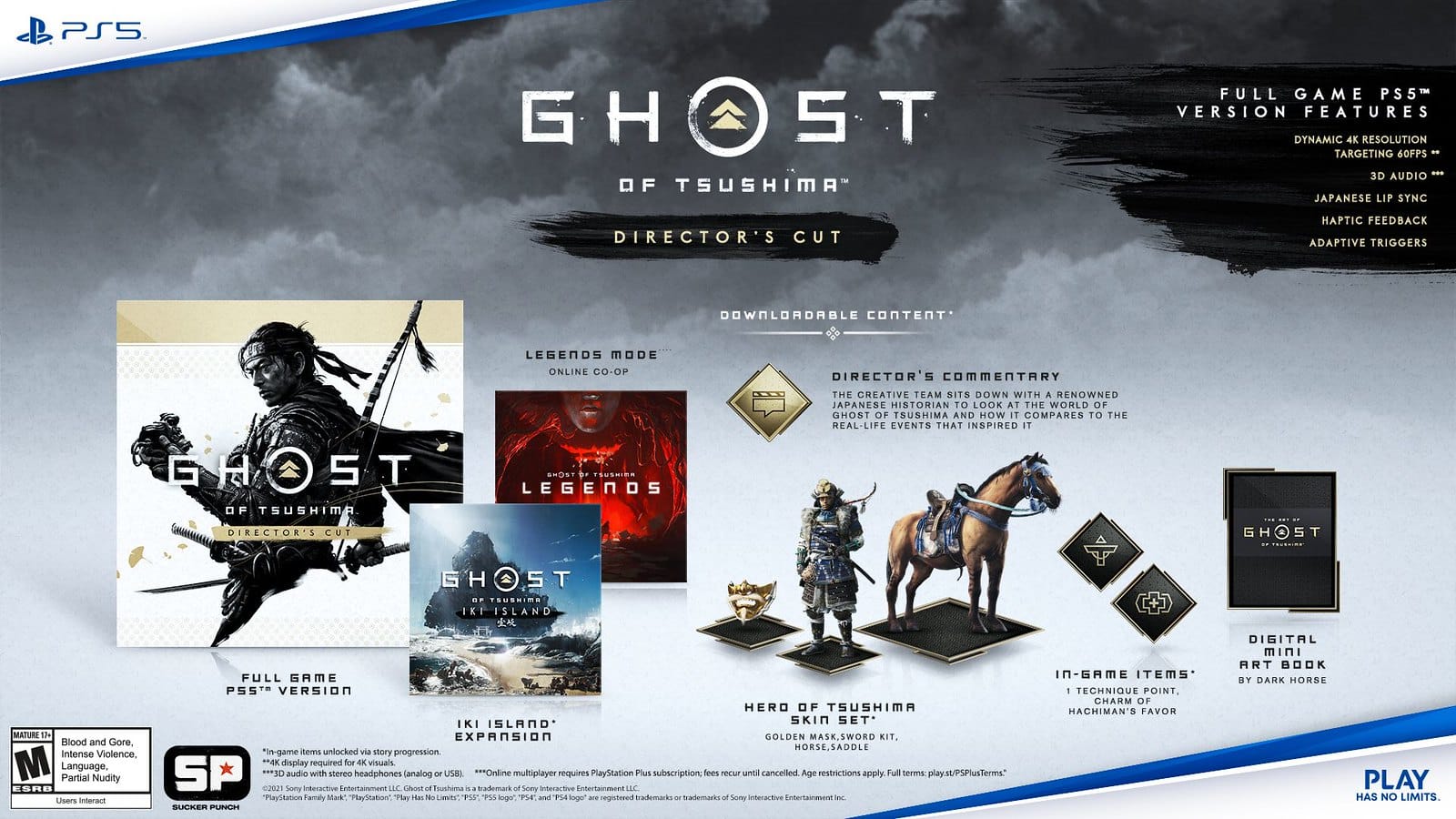 Here is how you can upgrade your game:

If you already own Ghost of Tsushima on PS4:

Check out the trailer down below: