I am no stranger to the Gigabyte Aero range. I have used the 15-inch RTX 2070 model for almost a year. The notebook is lightweight and powerful but most of all, it packs one of the best displays on the market thanks to its 4K OLED panel. Gigabyte’s newest Aero 17 HDR (XD Model) notebook now swaps out the RTX 2070 for an RTX 3070 and has replaced the 15-inch OLED panel with a 17-inch IPS panel. Unfortunately, even with the IPS panel, you’re still looking at a pretty expensive notebook that packs an identical design to last year’s Aero. It also packs the same design as the Aorus 15G. The only difference here is the Gigabyte Aero 17 includes a larger display.

It is important to note that the Gigabyte Aero 17 comes in a range of models. This one is the RTX 3070 notebook with the Core i7 CPU. You can also find an even more powerful version that includes a Core i9 with an RTX 3080. Expect to pay quite a penny for the entire range. This 3070 model retails for R49.999 or $2099 and the 3080 model costs R59,999 or $3099. Sure, the Gigabyte Aero 17 is a pricey device and it can game and work but that is a lot of cash for a notebook that shows very little innovation when it comes to design and features.

Watch our Gigabyte Aero 17 HDR down below.

The Gigabyte Aero 17 looks like your average black notebook and there’s nothing wrong with that. There’s no over-the-top vents, exterior RGB, fancy grooves or anything of the sort. Gigabyte clearly wanted the performance on the Aero 17 to speak volumes and the design to be as simple and dare I say boring as possible. To be honest, the Aero 17 looks exactly like last year’s 15 XA model. As I mentioned before, it also looks identical to the Aorus 17G except for swapping out the Aorus logo for an Aero one. I can’t fault Gigabyte here when it comes to the design because this device lives comfortably alongside the other Aeros. I just hope they do something to their Aorus range to set it apart. 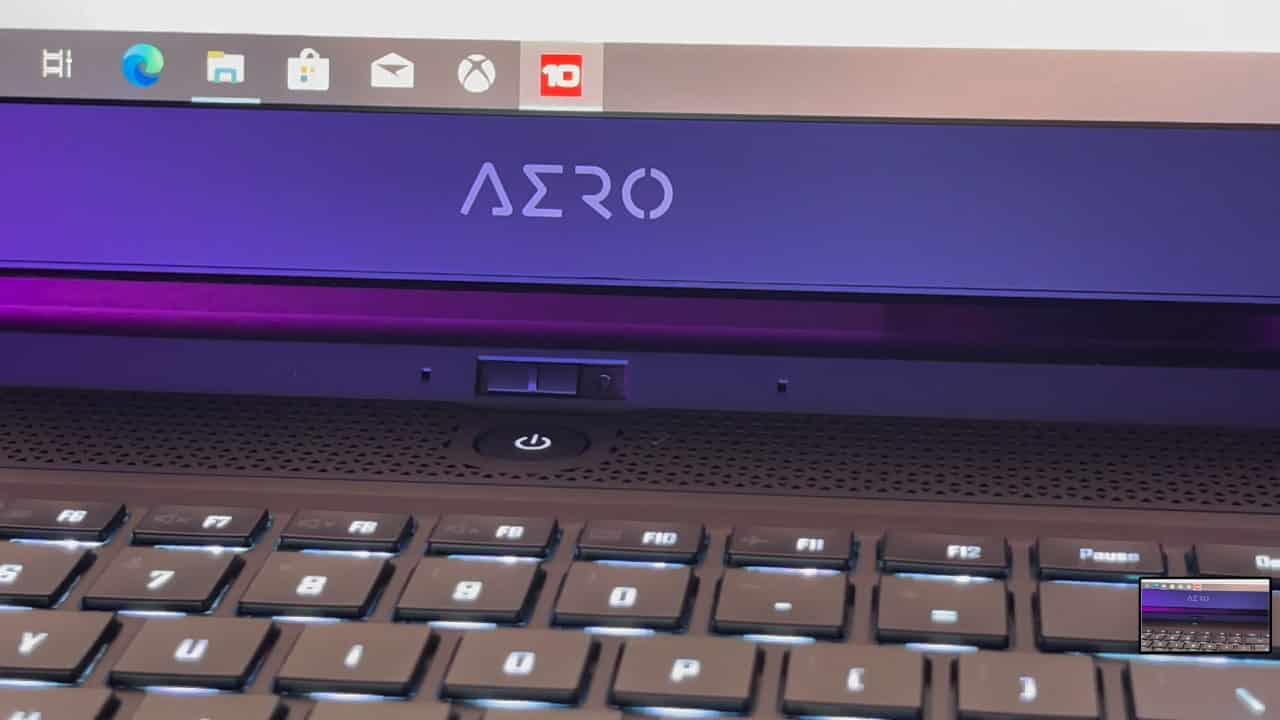 On the outside, there’s a white LED Aero sign that lights up and at the back, you’ll find an Aero steel slate that also lights up like a car registration plate. There is a bit of carbon fibre flair on the top of the device and underneath you will find a bunch of vents. Inside, we are greeted with a full keyboard that includes some nicely spaced keys. Each key is 15mm by 15mm and the inclusion of a number pad will make users happy.  There’s also a small trackpad, power button and webcam.

The trackpad is quite disappointing, to be honest. With a notebook this big that is aimed at productivity, you would think Gigabyte would do something to it. Instead, we get the same trackpad size you’ll find on a 15-inch Aero notebook. It also packs a fingerprint scanner. 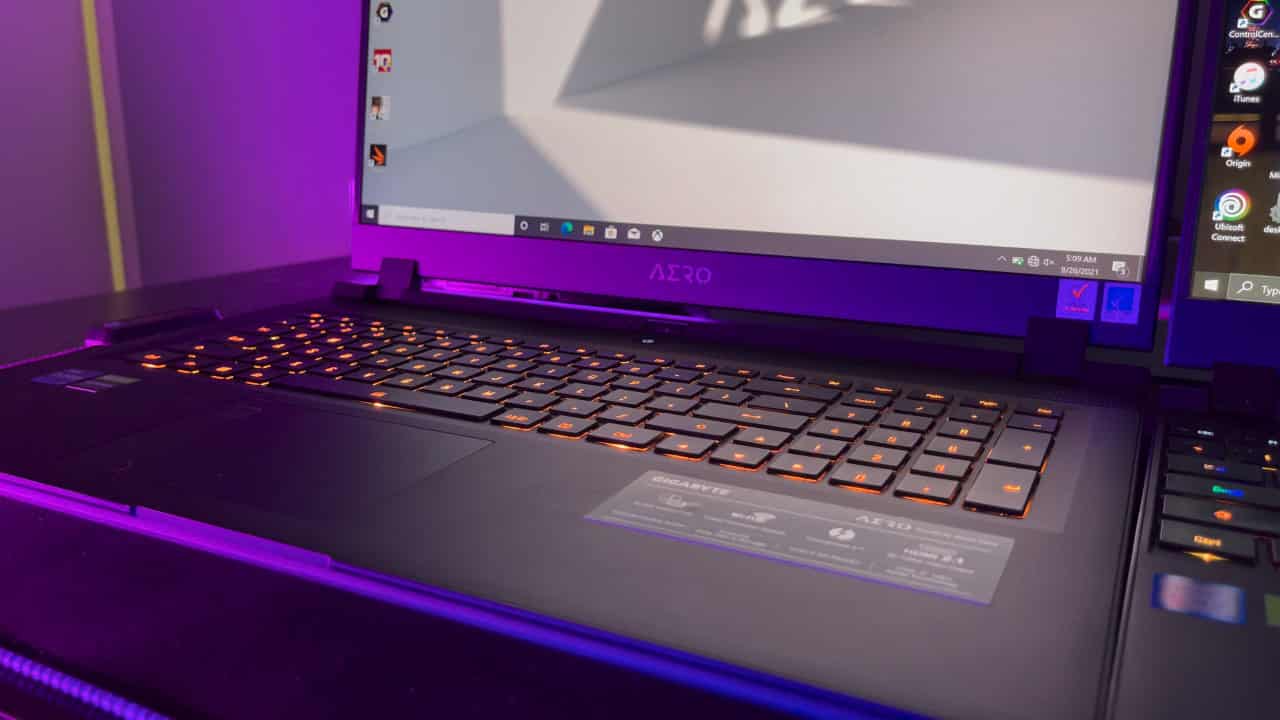 The webcam is also an issue. I have mentioned in the past that while it is cool having a slider to block and unblock the camera, the positioning of the camera is extremely unflattering. It angles upwards and the direction shoots up towards your face. You will feel forced to look down to avoid it looking up your nostrils during Zoom meetings.

Other than that, there’s nothing overly exciting about this Gigabyte Aero 17 by any means. The keyboard is RGB and chiclet but also great to type on. Travel time is slightly higher than most notebooks but it works. Nothing fancy here. The display takes up some decent space and the bezels around it are thin. Speaking of thin, the overall size of the device is also sleek and far from bulky. Considering there is a 3070 in this, Gigabyte still managed to keep the dimensions down while making use of the same vents and cooling system from last year’s devices. Sure, the design is tired now but it works. It isn’t too heavy, it is sturdy and the black fits with mostly everything. 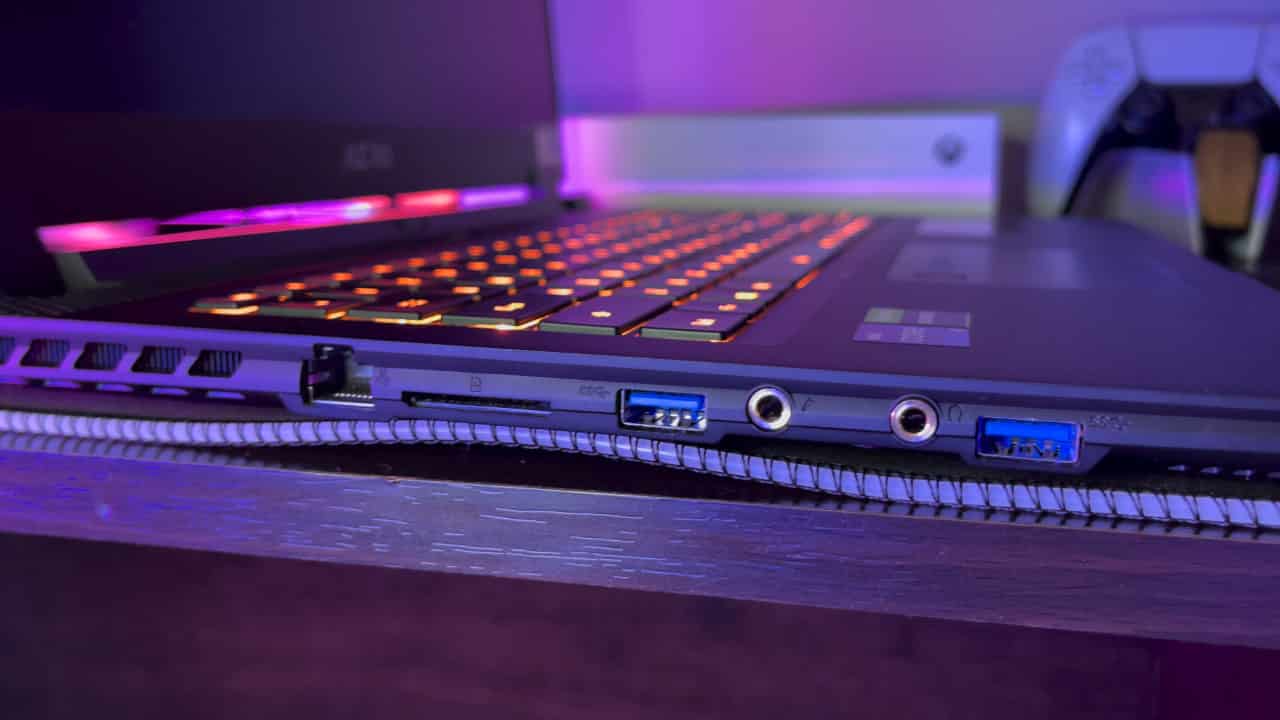 The ports are positioned around the device both on the left and right. 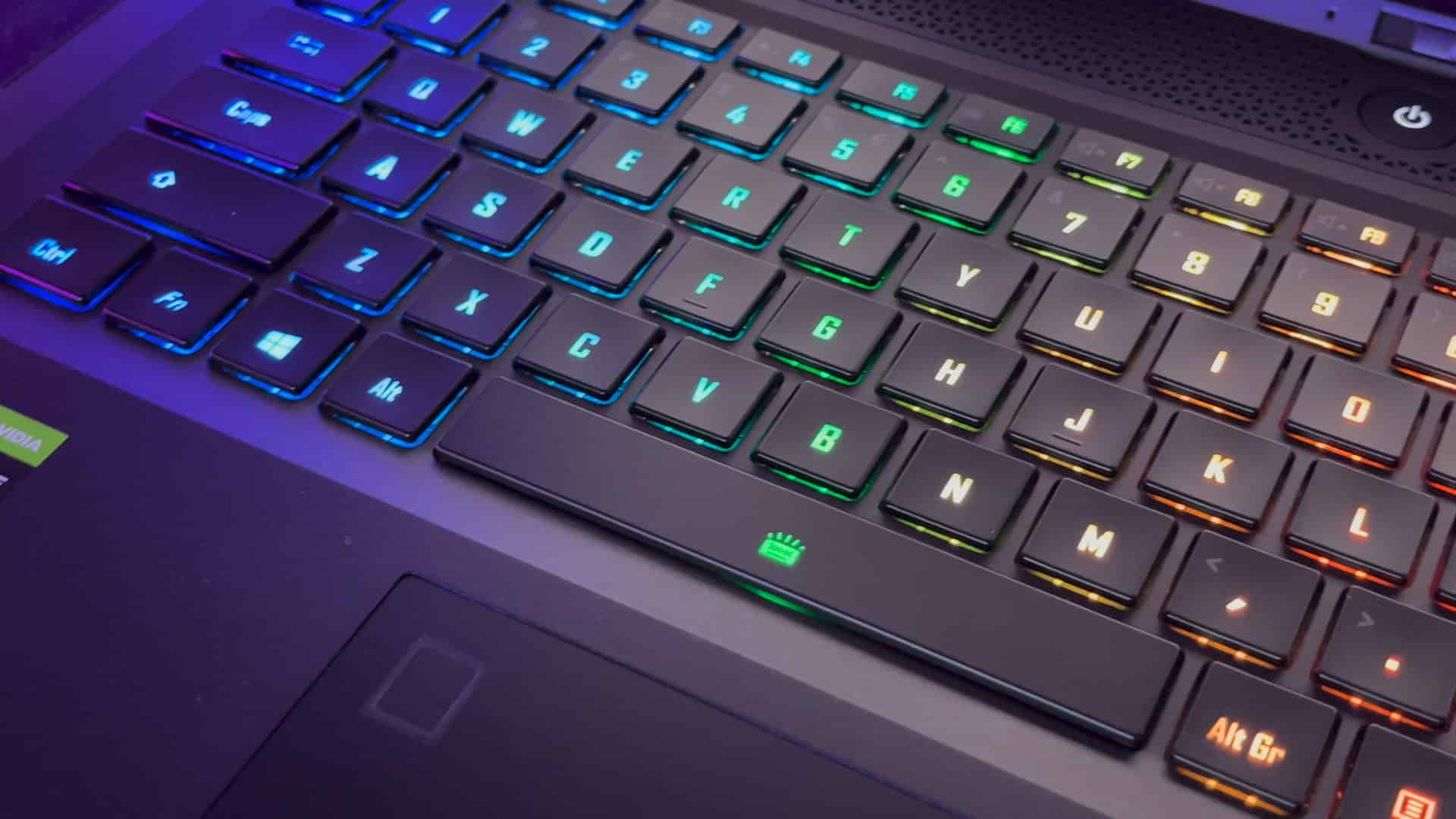 Even though the Aero 17 packs an IPS panel, this is one of the best displays I have seen in a notebook. Not only is it a joy to work on thanks to its larger display, but the calibration is almost perfect. It goes without saying that the panel is 4K at a resolution of 3840×2160. It is a 60Hz panel but thanks to this, the NVIDIA RTX 3070 can take full advantage of the display. The Aero 17 also has DisplayHDR 400 certification which means this IPS panel can produce HDR brightness and colours. It also means it can reach 400 nits of brightness in which case, it actually peaked at 530 nits during tests.

Of course, 500 nits is still far off the requirements to produce accurate HDR colours and brightness but it is still impressive for a notebook. Even more so for an IPS panel in a notebook too. This IPS panel also has an impressive viewing angle of 178-degrees. Some TVs can’t even reach this quality. It also includes colour coverage of 100%. A contrast ratio 1200: 1 and produces 99.9% sRGB coverage and 99.6% Adobe RGB. 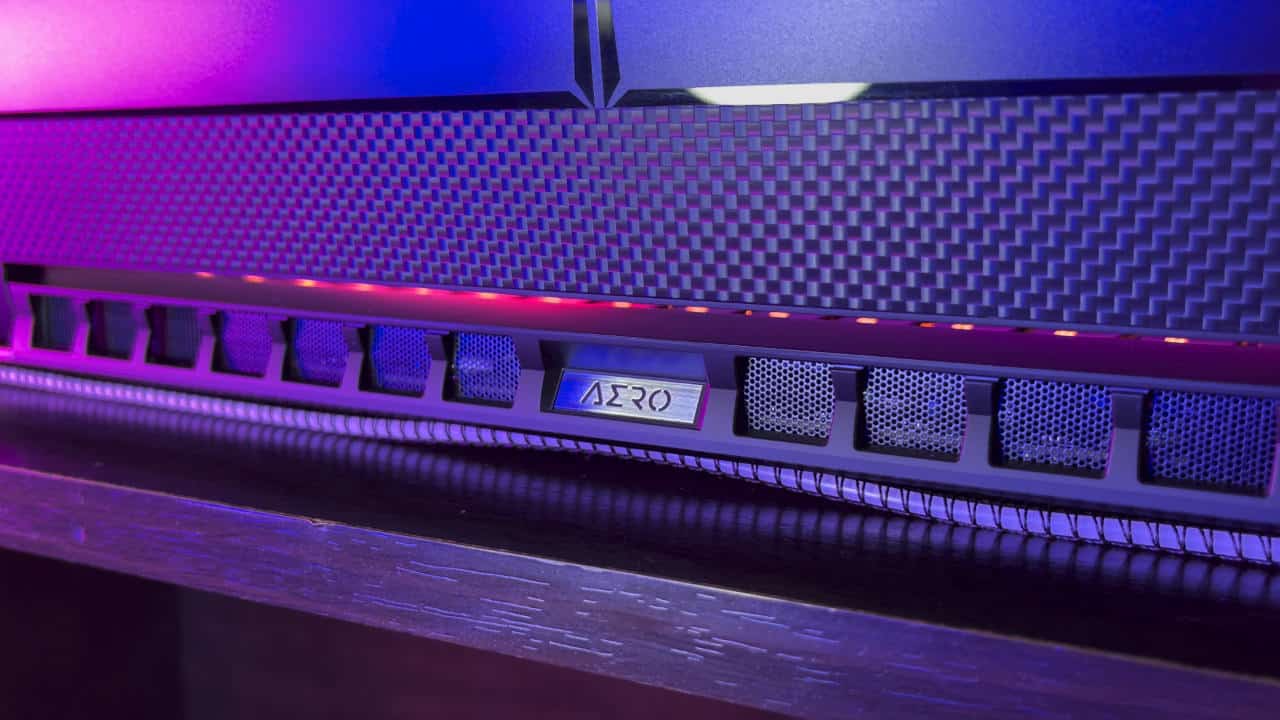 When it comes to the performance of this Gigabyte Aero 17, it is a beastly machine. The cooling system also does a somewhat decent job keeping this notebook cool while under extreme stress but don’t expect it to be quiet because the Aero 17 is far from it. The device yet again uses the same 5-pipe cooling system with twin fans to keep the internals from overheating. There are also ample vents around the system that help exhaust heat. It is the same cooling system in the Aorus 15G and Aero 15XA. The two large fans include over seventy fins and that combined with the 5 copper pipes helps keep both the CPU and GPU cool during workloads and gaming.

I ran a handful of tests during my review with this Gigabyte Aero 17 and got the following results. 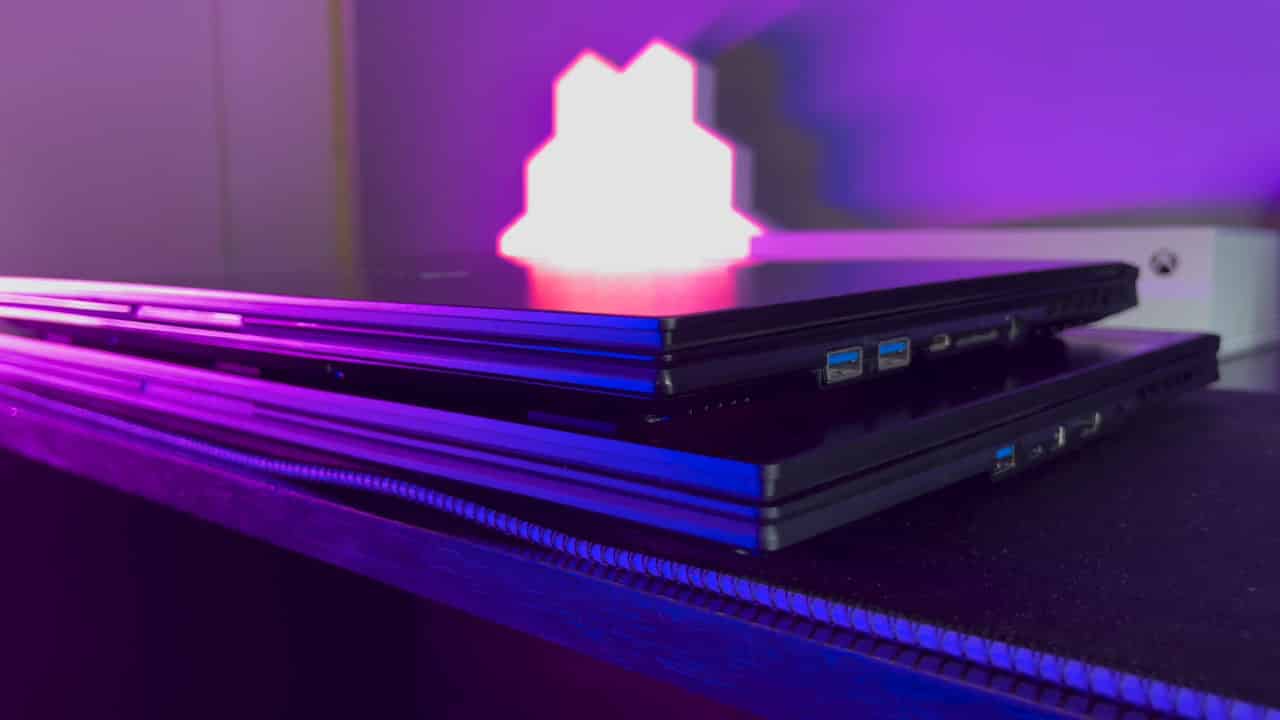 As you can see from these test results, the Gigabyte Aero 17 is quite a powerful device and you can pretty much get away with 1440p 60FPS across any modern game with raytracing enabled. If you’re diving into the 4K raytracing spectrum, you will suffer from a 30-40FPS average depending on the game. Still, it makes this 17-inch 4K display well worth the investment when combined with the RTX 3070. Keep in mind that the display is capped to 60Hz but the device does come with an HDMI 2.1 port so you can always output it to a supported 4K 120Hz TV or monitor to boost this even more.

During my tests, the Gigabyte Aero 17 did get quite hot and peaked at 89 degrees celsius on the CPU and 75 on the GPU. I also never suffered from any thermal throttling so it seems the copper pipes and giant fans inside the notebook managed to keep things cool throughout my testing. 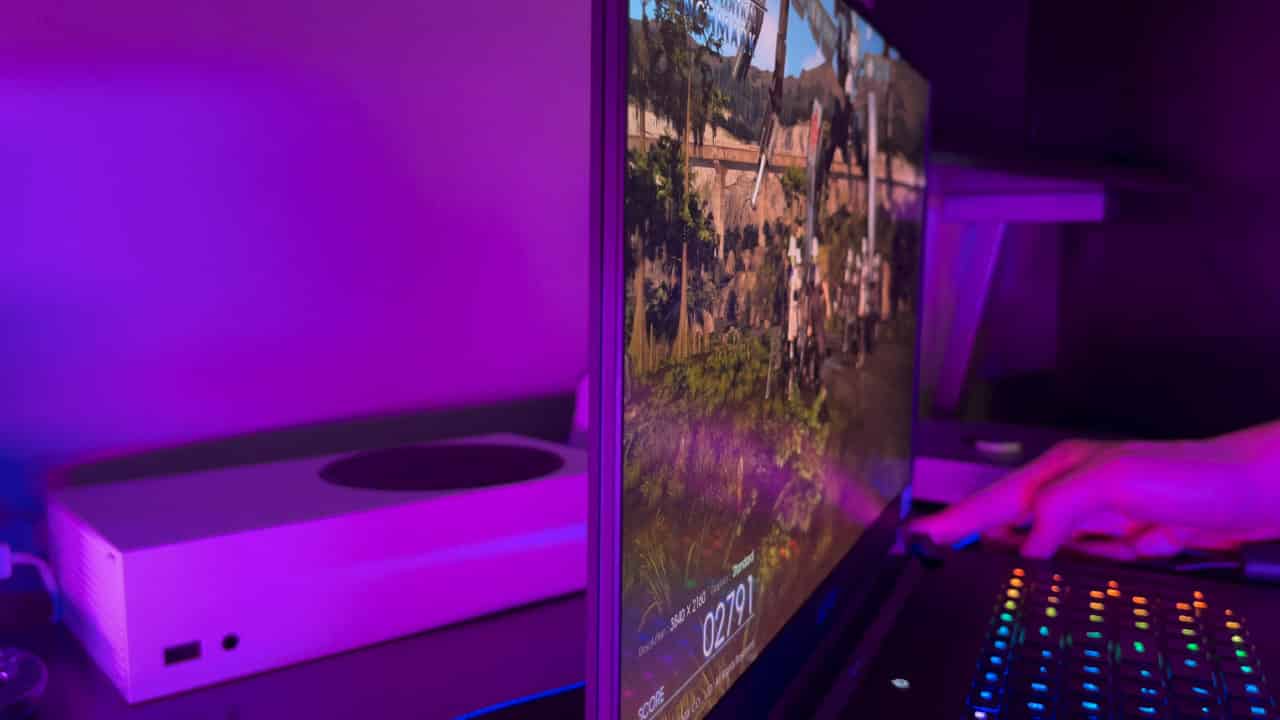 As for the battery life, it is okay. While working on 30% brightness and in battery saver mode, I managed to pump out over four hours of battery. You can easily get around six if you reduce the brightness even more. If you want a decent viewing experience at around 50-70%, expect 2-3 hours of battery life. It goes without saying that gaming will need the power plugged in.

Lastly, the speaker system is also fairly decent but I have also heard better before. It seems as just like the cooling system and chassis, Gigabyte took the same speaker unit out of the Aorus 15G and 15XA and placed it into this 17-inch notebook. I did expect a bit more bass and deeper sounds for a device this big. Also, given its price tag, I expected more.

The Gigabyte Aero 17 is a fantastic 17-inch notebook but it didn’t blow me away. It is damn expensive for what you’re getting here and that isn’t anything innovative at all. Sure, it stays cool and powers most games but for R50,000, you would just expect a bit more wow factor and this is just an Aorus 15G with a 17-inch display. Granted, the display is superb but it still makes this notebook a tough sell.

This Gigabyte Aero 17 HDR review is based on a unit sent to us by Gigabyte. The notebook retails from R49,999 in SA.