Horizon Forbidden West might still be a few months away but Guerrilla Games isn’t holding back on the gameplay details. The developer has shared new information on the game’s new abilities and skills and how these new features set the sequel apart from the original release. According to the studio, Aloy in Horizon Forbidden West can now free-climb any and all surfaces including rocky terrain, walls, trees and poles. This ties into the game’s parkour and exploration system and will also help players approach combat encounters from different angles.

Horizon Forbidden West also features a new workbench where Aloy can upgrade her weapons and gear as she explores the game. This bench will require specific materials and they are harder to find the more advanced her gear gets.

In the previous game, Aloy was restricted to mounting one specific type of machine. However, in Horizon Forbidden West she can now use new types of machines as mounts. At the moment we don’t know what new types of mounts there are in the game. We can only hope Guerrilla Games has included a flying one because that would be epic.

Of course, we also know that in Horizon Forbidden West Aloy can now swim. Guerrilla says that this new mechanic has opened up a whole new layer of exploration to the game. Think of underwater as being a new world map to explore on its own. There are hidden items to gather, treasures to find and the ocean packs its own deadly machines to fight.

Guerrilla Games says that the world in Forbidden West is more dynamic than ever. Players will feel empowered to manipulate and destroy the environment around them by using the gear Aloy has on her.

“Our traversal design decisions were always in service of increasing dynamic interactivity with the world around you. This could be to empower the player to manipulate and destroy their environment with a tool like the Pullcaster; or grapple-launching into a glide with the Shieldwing to set yourself up for a strike from above. What excites us most is how our mechanics, new and old, synergistically interact with each other to provide varied and dynamic approaches to any scenario.

‘This wide array of new options also posed challenges to how we think about level design. We need to allow for players to outsmart us, using new moves or tools to bypass some of our challenges in clever and unpredictable ways. Traversal puzzles won’t always have a binary solution; we encourage players to experiment and have fun with the new tools. We will offer a variety of challenges, regardless of playstyle or skill or previous experience in Horizon Zero Dawn.”

As for the skills, Aloy now has a new skill tree she needs to progress through during the game. The studio says there are 12 Valor Surges in total and each represents strengthening a different approach to the game. A new skill, for example, is called Resonator Blast. Here, Aloy can charge up her spear with melee hits and when fully charged she can place the energy built up on enemies. Aloy can then shoot this energy and cause a massive explosion. 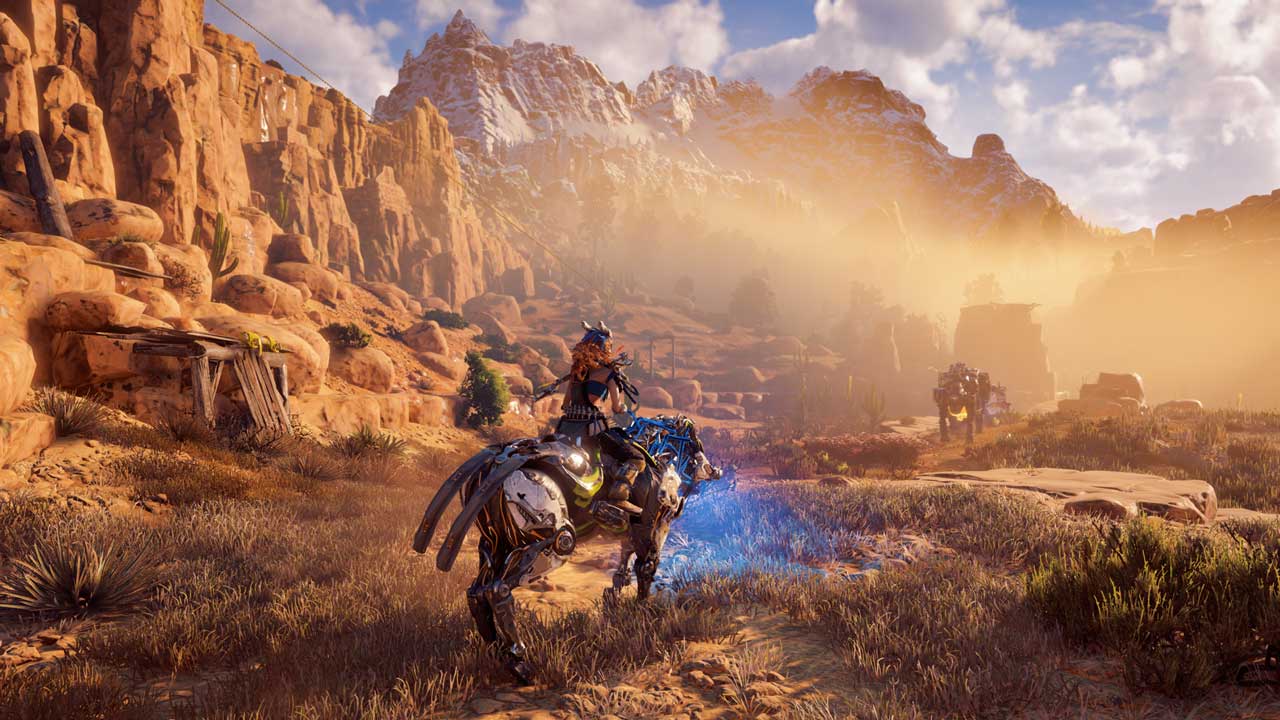 By the sound of things, Resonator Blast mixes up combat by forcing the player to get up-close before retreating to fire an arrow at the enemy.

Aloy also has new gear in the game. One specific weapon is called the Spike Thrower. This is a new piece that gets tossed at enemies and can cause high damage. There’s also the Blast Sling that acts as a grenade launcher in a sling form. The studio says that each weapon includes a range of different ammo types, upgrades and perks. Players can explore a range of ways they can approach combat.

There’s a lot to unpack in the latest update. You can check it out all here on the PlayStation Blog.  Horizon Forbidden West releases on 18 February 2022 for PS4 and PS5.