The notebook market has never been bigger and the need for light and powerful devices is an ever-growing challenge that tech brands face. To say that the Huawei MateBook range is not a direct competitor to Apple’s MacBook range would be an understatement. Everything about it screams “MacBook” from the name to the packaging to the overall design and feature set. From the moment I had it in my hands, I was basically working on a Windows 10 MacBook. Thankfully, the Huawei MateBook 14 also packs some incredible features that make this notebook a fantastic option for consumers.

Want to watch the Huawei MateBook 14 review in action? Check out the video down below.

It only looks great with a sleek design but it also fits into Huawei’s ecosystem that the company is slowly growing through its smartphones and other devices. If you have any Huawei phone, you can air share files to the device similar to the AirDrop feature on iOS and one can even control your smartphone through the notebook. It is a cool add-on that makes this Huawei MateBook 14 a compelling option for users.

Even outside of the ecosystem aspect, the Huawei MateBook 14 packs some really fantastic tech. The display is superb packing a 14-inch 2K IPS panel. The bezels are also only 4.9mm thin so there is more display for you to gaze at. The body is sleek and light and the smaller details like the super-fast USB C charger and hidden webcam make the notebook feel extremely premium. 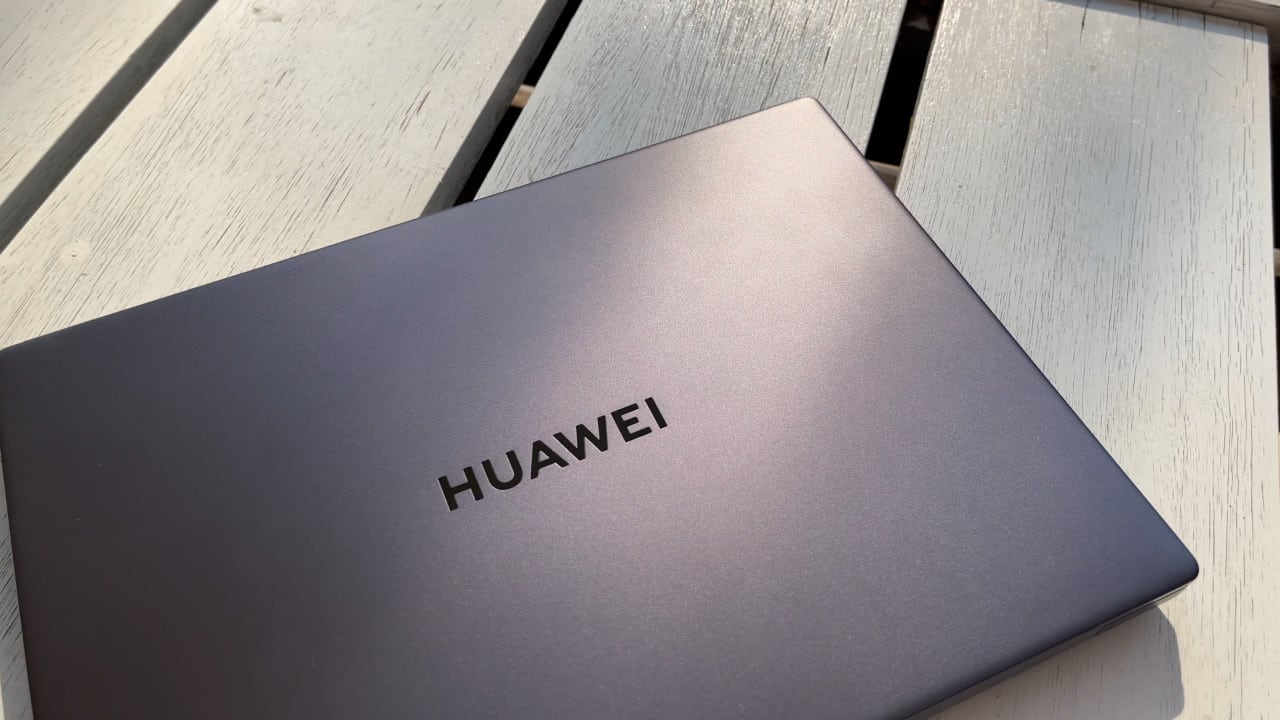 As I mentioned before, it is hard to not compare the MateBook range to the MacBook range and that is a good thing. Huawei has delivered a light, portable and sleek notebook on this MateBook 14 and it is hard to find issues here when talking about the design and build quality. 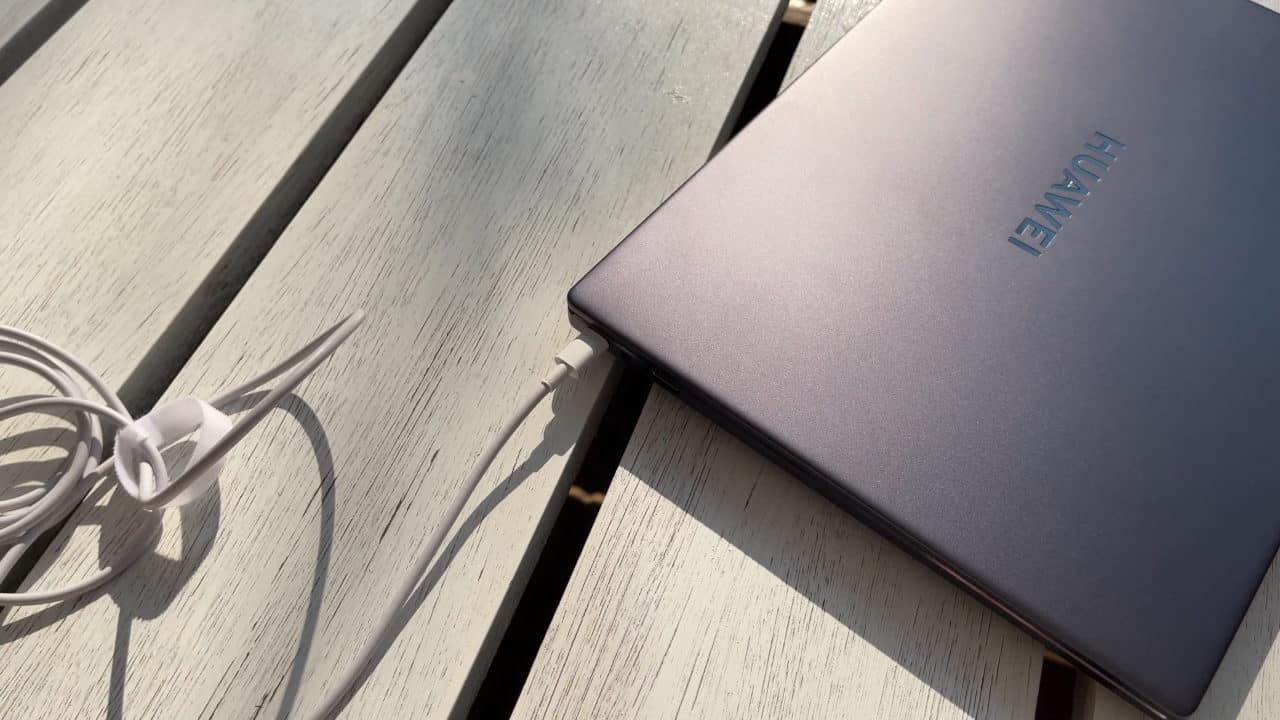 The Huawei MateBook 14 is a minimalist as possible. The top features a metal sheet with the Huawei logo embossed into the centre. The bottom is plastic but also bears the same Space Grey colour pigment. I can’t help but feel as if this device is actually purple. It might be my eyes but it is not as grey as you would expect. When it hits the light, I can swear I see some purple on it.

There are some really good looking chamfered edges on the Huawei MateBook 14 too that glisten as the light touches them. It further adds to this premium feel the company was going for. On the right, there are two USB 3.0 ports and on the left, you’ll find the audio jack, HDMI and USB C port that also doubles up as a charging port.

Speaking of charging, the device comes with a hefty 165W USB C power adaptor that is always great to have around. I can charge my iPhone with it, my AirPods, my Nintendo Switch, my DualSense Controller. You name it. Yes, it does power and charges the Huawei MateBook 14 but the sheer versatility that comes with a Type-C power adaptor makes this an incredible value add for consumers.

I really do want to emphasise how sleek this Huawei MateBook 14 is. There are very few ports, it is thin and light and the entire shell is extremely well-designed. Even the underneath has one sticker and carefully placed rubber feet for grip. When you open it up, you are welcomed to a massive display with thin bezels around it, a half-sized keyboard, a fairly large trackpad and the power button that doubles up as a fingerprint reader. It is the full package. 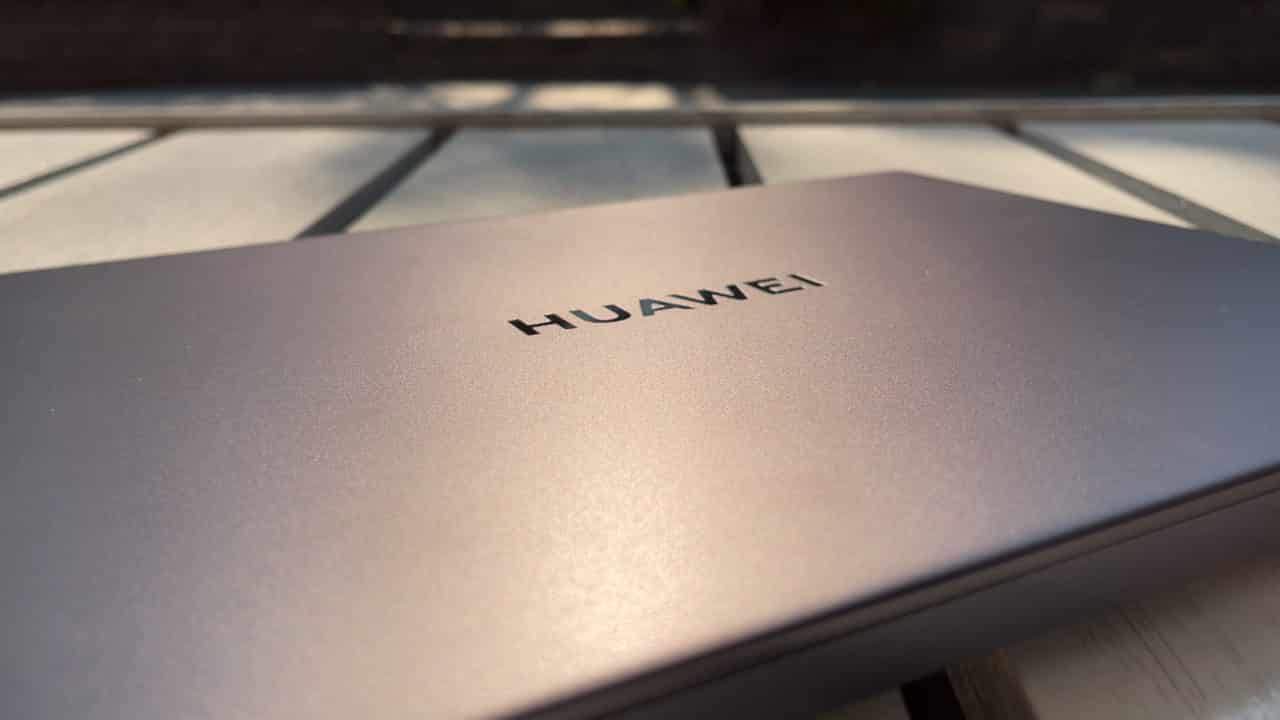 The display, in particular, takes up 90% of the panel. It is a bit too glossy for my liking and might be an issue when against bright conditions but the touchscreen support also goes a long way in making this display even better.

One last thing I need to mention on the design factor is the webcam which has been carefully been hidden underneath the button between F6 and F7. It is pretty cool to press and lift up thanks to its spring mechanism underneath the key. It then clicks back down and the entire experience is extremely satisfying. 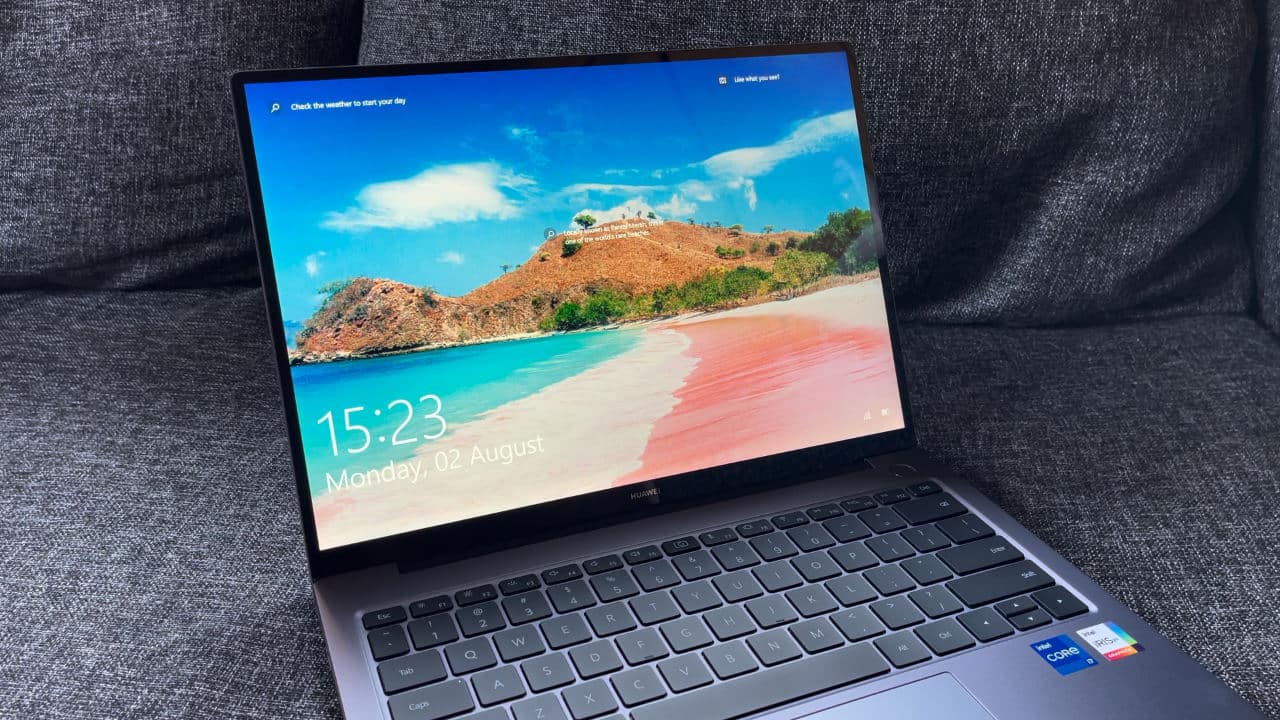 My only gripe with the webcam is the angle it pops up at. It is just a bit too low and I would recommend perhaps titling the notebook up a bit with a book or something to get it higher during meetings and calls. Else the angle shows more of your chest and just looks strange.

As Huawei put a lot of effort into this display, let us start with that. First off, the resolution of 2160 x 1440 is superb on this 14-inch panel. There’s no pixelation, the text is crisp and clear and 300 nits brightness helps in bright conditions. The touchscreen support does enable up to ten fingers so you can swipe around the display to perform gestures. The gestures also copy Android which is great for those familiar with them. Three fingers down can take a screenshot and swipe across the display changes desktops.

If you do use the touchscreen on this display prepare for the fingerprint circus because it does pick up everything. There’s nothing you can do about it. 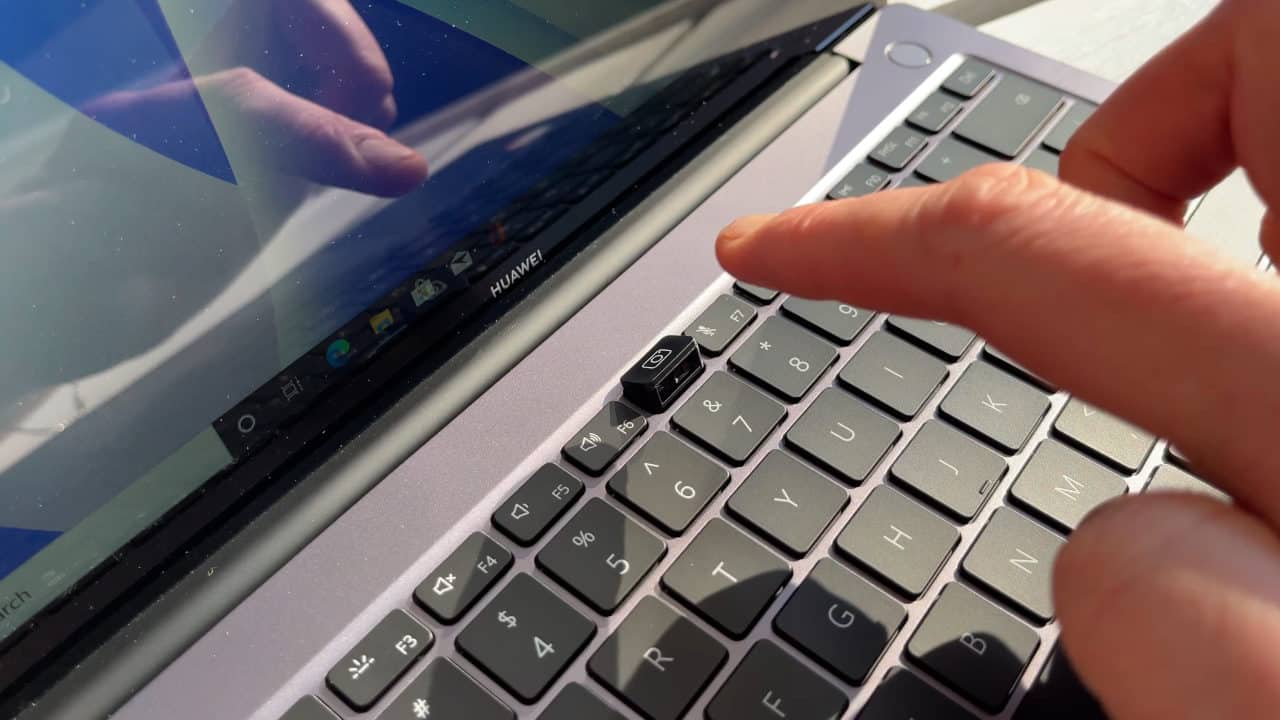 Typing on the Huawei MateBook 14  is good. The keys are like any other notebook with a chiclet design. They feel okay to type on, the key spacing is comfortable and while the keyboard lacks a number pad, it does have a full-sized shift and enter button. The backlighting includes two brightness levels and off. The lighting is bright and does a great job illuminating the keys.

As for the touchpad, I thought it was a bit hard, to be honest. Pressing the keys is easy enough but the texture isn’t as smooth as you would expect. It feels a bit rough. Thankfully, it is large enough to perform all sorts of gestures on it with ease. 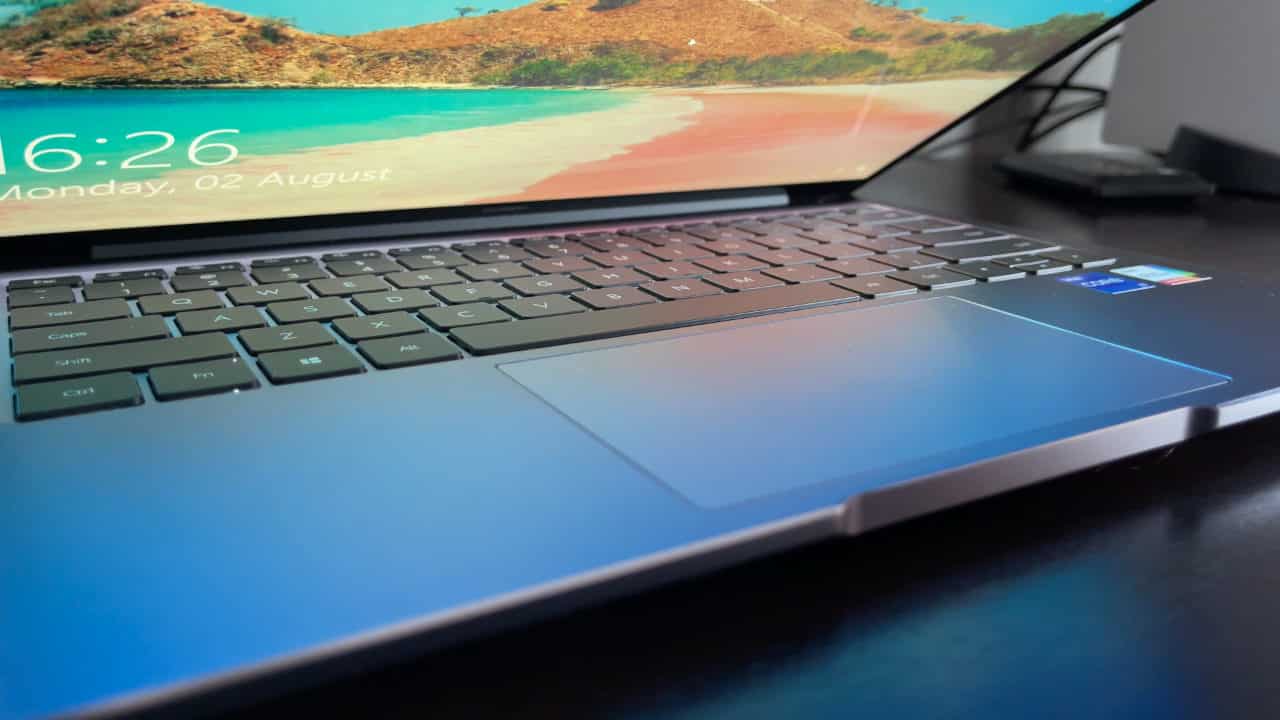 So how does the Huawei MateBook 14 perform when it comes to working and can you get away with some gaming here? Well, the general performance of this notebook is incredible. Daily use never had any issues at all. From the moment I opened the lid and the screen came on within 2 seconds, to web browsing, photo editing and folder navigation. Huawei really put a lot of work into refining this notebook for productivity.

If you are interested in scores then find them down below:

Real-time gaming on the Huawei MateBook 14 was surprisingly good. The Intel Iris Xe GPU isn’t as bad as I thought it would be and while you probably won’t be able to play the latest games at 4K 60FPS, you could get away with HD gaming at 30FPS on the notebook. This makes it great for gamers who are looking for a device that can play Sims, Windows Store app games and more. 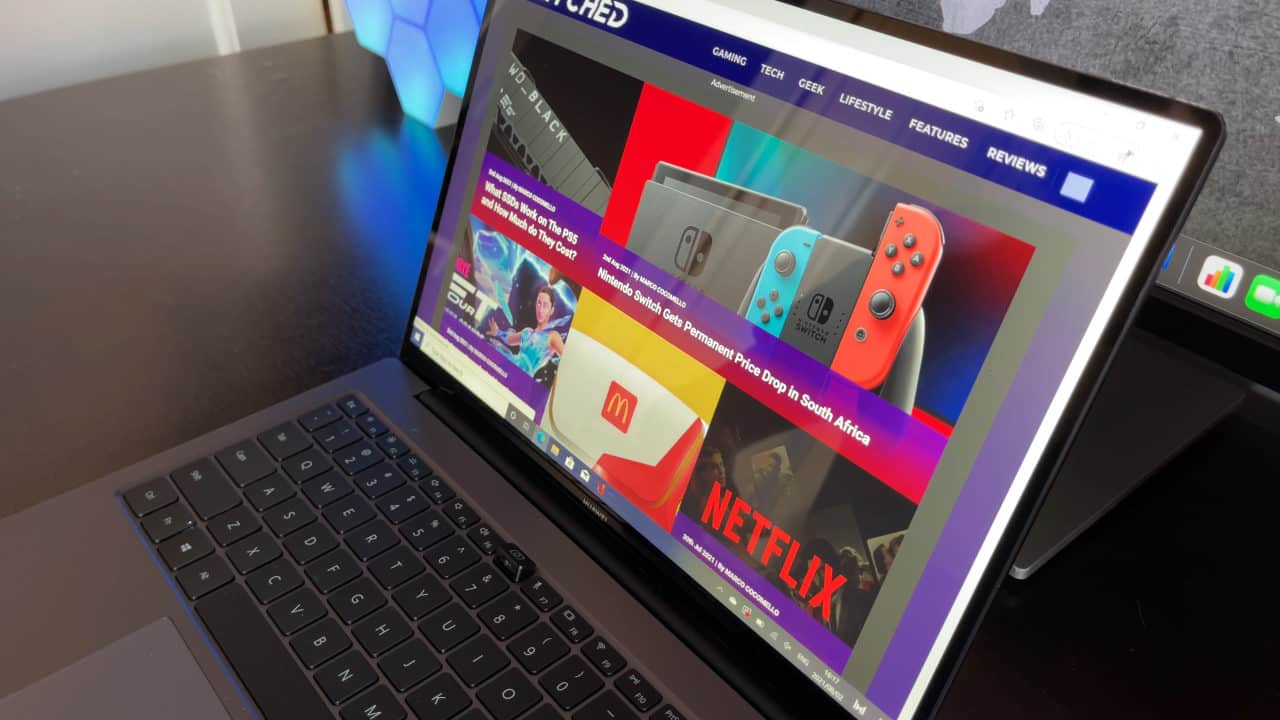 I even tested GTA V on the device and it performed fairly well. I was able to get the game running on medium settings at HD while maintaining around 30FPS performance. You could technically get away with playing most games on this notebook but there will be sacrifices needed in order to achieve this. Be it by lowering the resolution or settings in-game.

The battery life on the Huawei MateBook 14 is decent enough. It lasts a full day of work while typing and web browsing. This is also without the screen brightness on the max. You could easily pump 10 hours out of this notebook with heavy use. This is thanks to the Intel CPU and GPU combo that go a long way to improving the battery life. 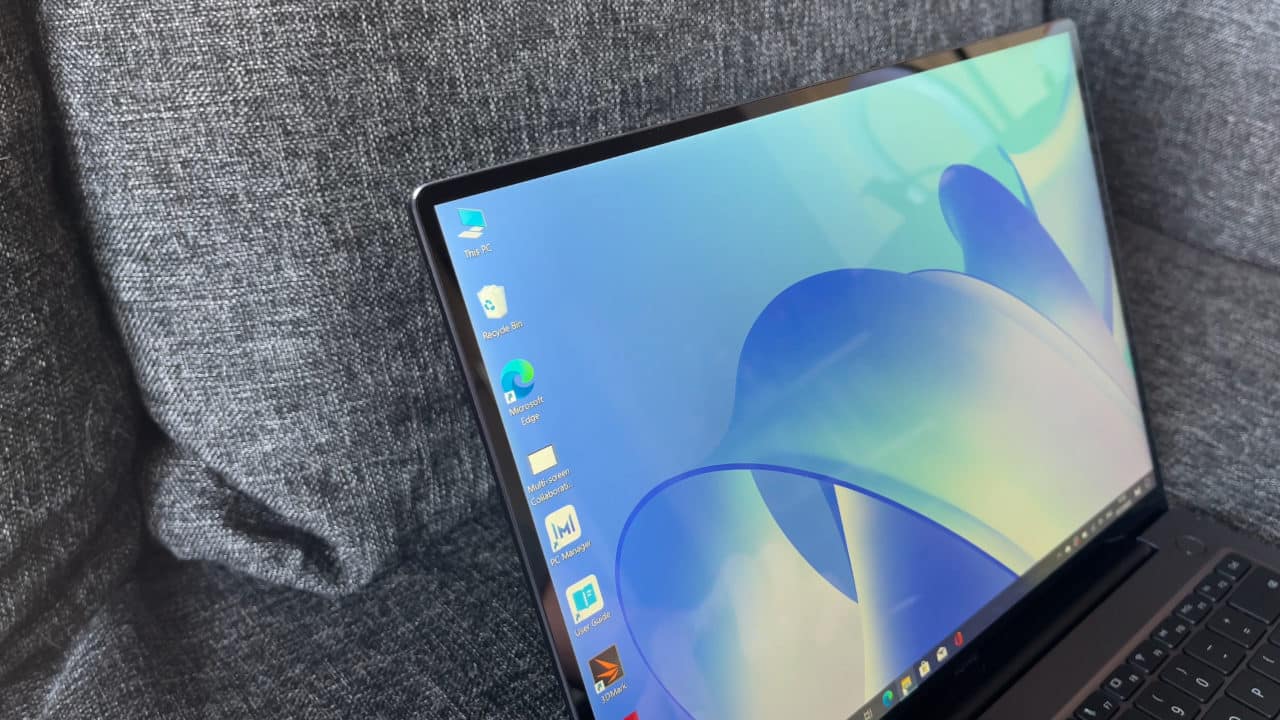 The Huawei MateBook 14 also charge very quickly. It takes about an hour and a half with the charger to go from zero to one hundred percent battery life. As for the speaker, they are just okay. They don’t have much power or loudness to them but they should provide enough sound for videos and zoom calls.

I am not a fan of bloatware on a notebook. Often, I get one and restore the Windows 10 installation to delete the terrible Norton trials and other apps that tech brands insist on installing. Thankfully, the Huawei MateBook 14 came with some rather helpful apps and software. 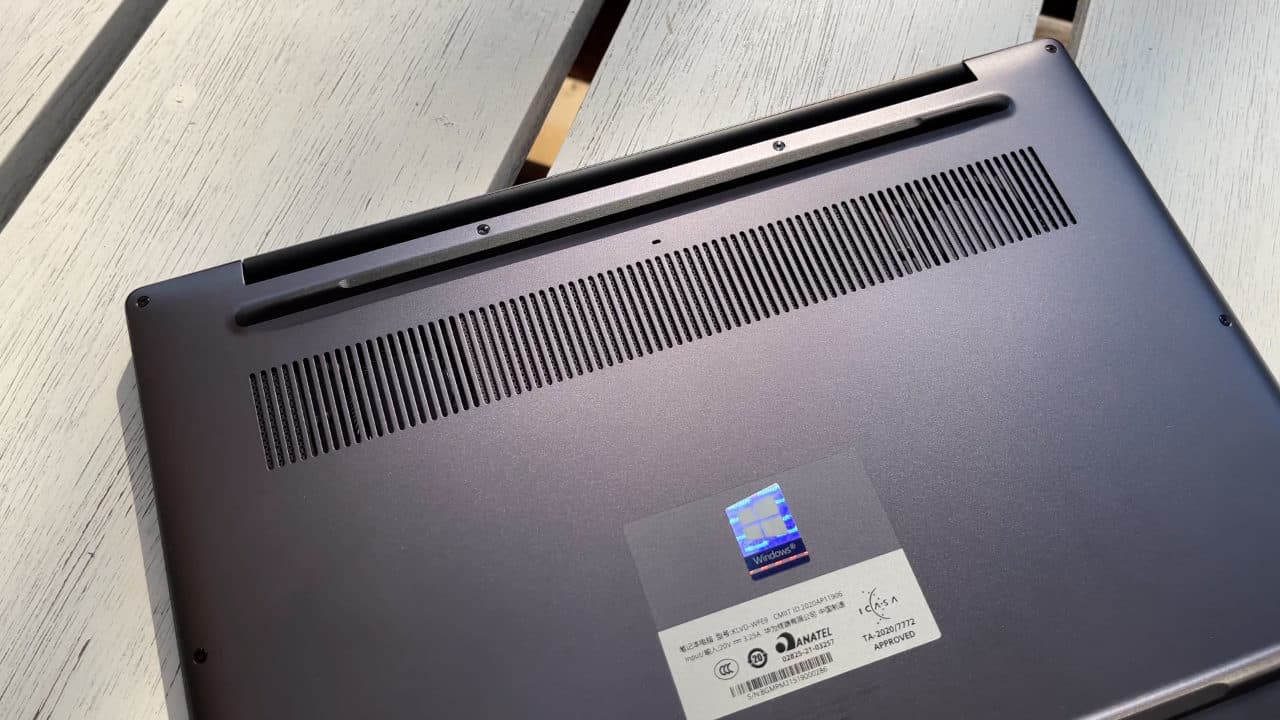 Huawei Share is one of these and it enables the ability to share your smartphone screen to the notebook so you can take calls, view items and even drag documents and files directly off the phone screen on the desktop to a folder on the notebook. This makes use of NFC through the trackpad and any compatible Huawei phone.

The sharing feature is launched in an app called the Huawei PC Manager. It is a lightweight program that keeps track of the drivers, CPU usage and documents opened in the past few days. You can also store copied text on the clipboard and even quickly take a screenshot. It was more helpful than I thought. 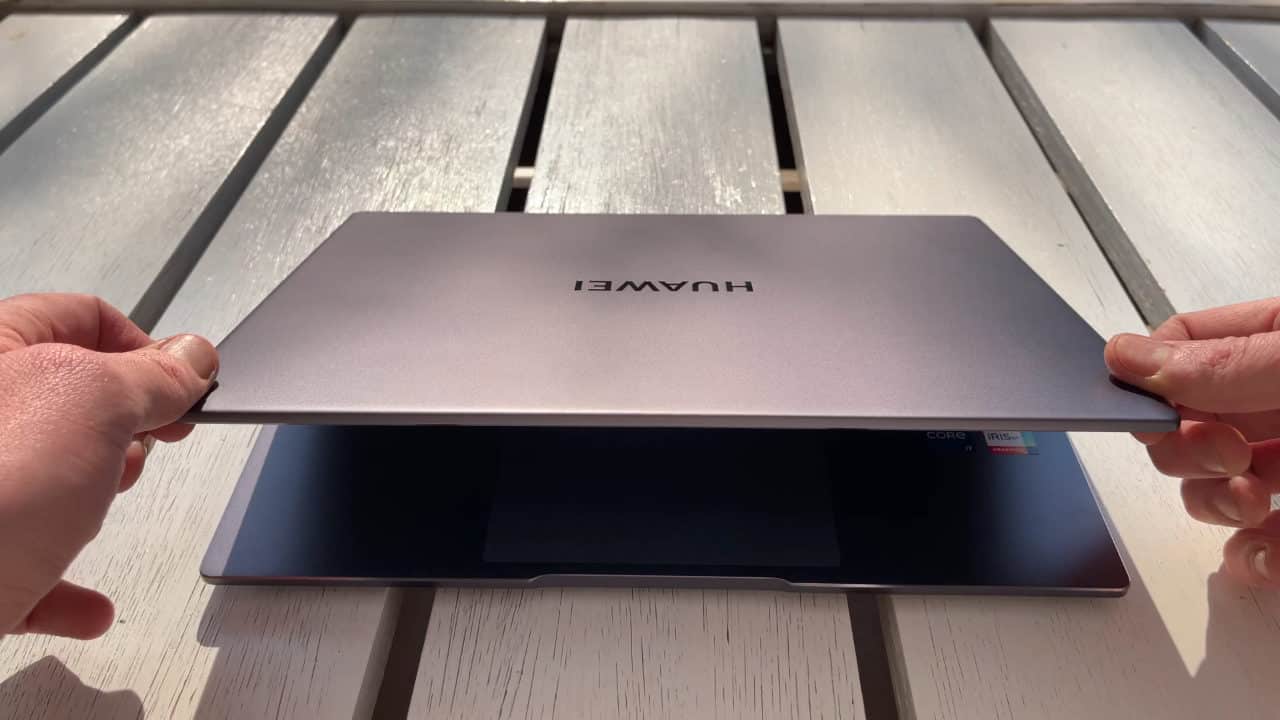 The Huawei MateBook 14 costs R24,999 which is around the same price as most other notebooks in this performance range. Even the MacBook Pro 13-inch costs R23,999 although the SSD is half of this MateBook. It is a more premium device and the price tag is justified. It boasts an incredible display, sleek and attractive design and the performance is top-tier when looking at productivity.

This Huawei MateBook 14 review is based on a load unit sent to us by Huawei. You can pick it up today from the official store starting at R24,999