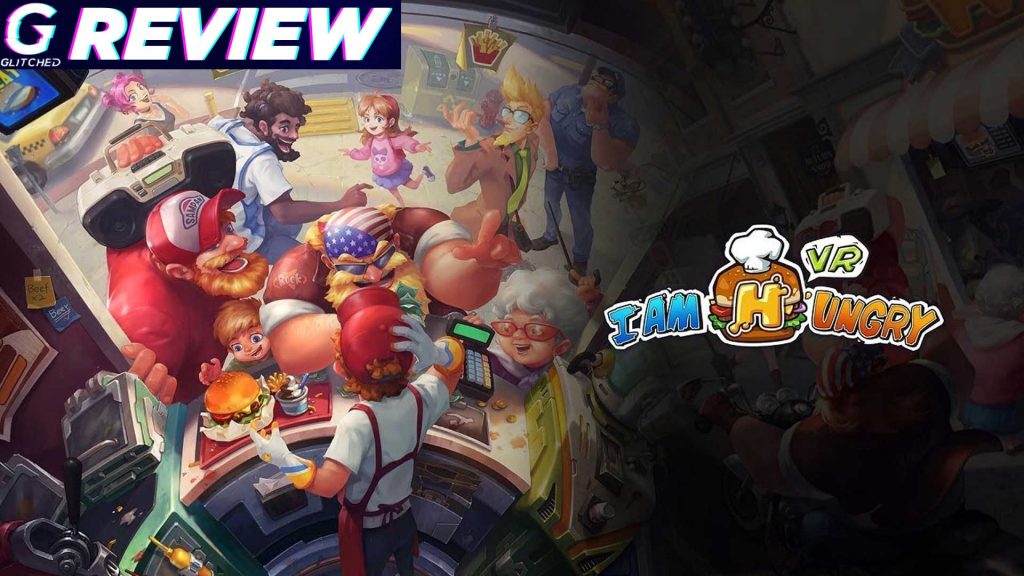 I love a good ol’ foodie sim where you run a restaurant and have to strategize as you cook orders and deliver them in a timely manner to make sure you get the most profit and keep the customers happy. Diner Dash is one of my favourite mobile past-times and when I saw “I’m Hungry” it looked like a VR version of the game.

There are some similarities and for the most part, this VR cooking game is fun, but its grind and tedious gameplay is the biggest downfall. I’m Hungry sees you own and run a burger joint in what looks like a busy neighbourhood and theme park.

As you go about each mission you will need to make customers happy by making their orders as quickly as possible and delivering a bag of food to them as they stand and wait. There are four machines, drinks, fries, burgers, and ice cream and the process is pretty much the same rinse and repeat for each mission.

Burgers come in two different variants with a chilli, and cheese option and every customer will opt for a different number of things. The big muscled guy will often want a few different burgers, the little girl will only order one thing and pay with a quarter and the rich pompous white guy will order a load of food because well, he is rich. 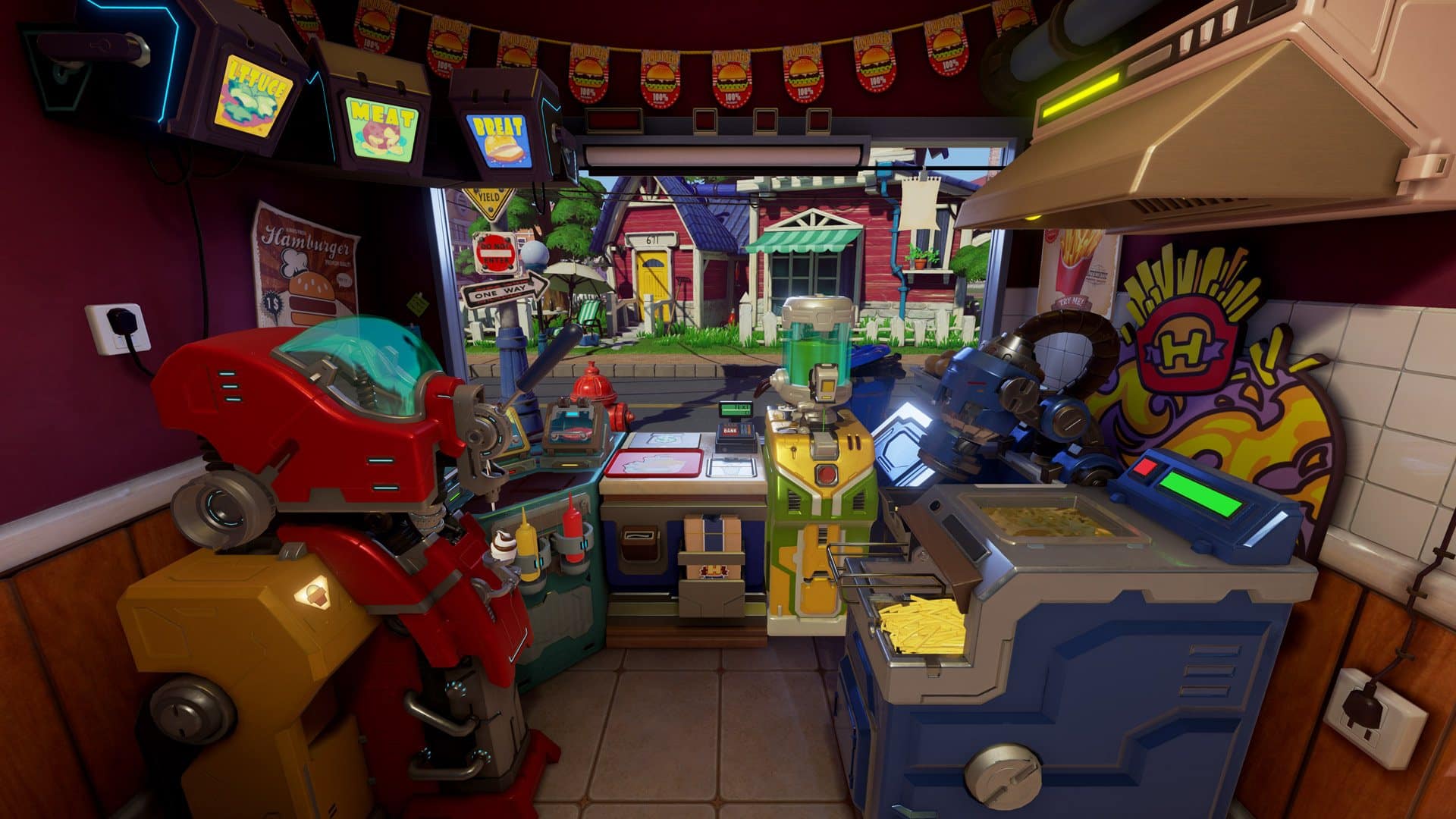 Preparing food is simple. The game uses the PlayStation Move controllers and you wave them around as you interact with the various machines. You will take patties out of the warmer and place them on a bun you just put down, squeeze cheese sauce over it and place a piece of lettuce before putting the last bun on it and serving it up. Grab some fries you just cooked, an ice cream you had prepared ten-minutes ago but does not melt and bag it all in a satisfying flip on your hand and give it to the customer.

The customer then pays you and you need to take the money and place it in the till. It all works really well and later on in the game when the orders are more complex, you feel on the edge as you are whisking about the kitchen trying to keep track of what you have done and making sure everything is in order before you send it out. 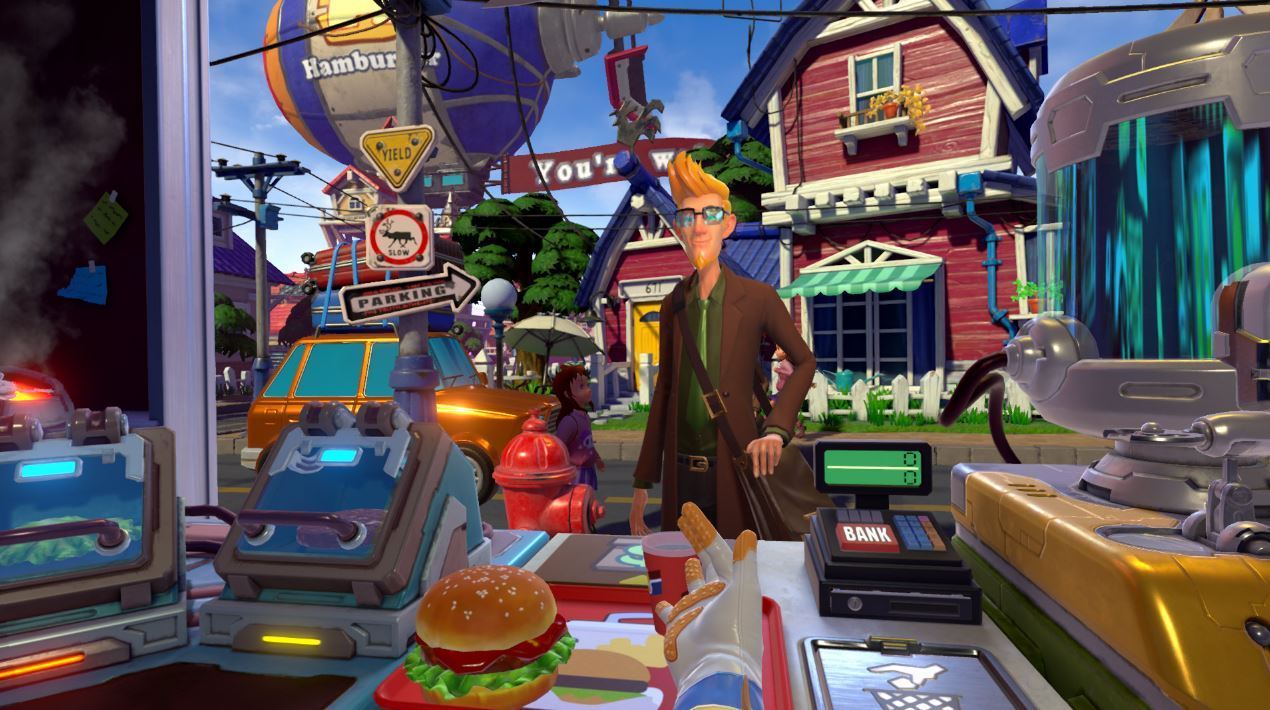 Every stage demands a specific number of people being served to get a three-star rating and you make more money by serving the customer the right stuff as fast as possible. It is all quite fun but in short bursts only.

The problem with I’m Hungry is it never really goes anywhere in a hurry and the real grind is not worth it. You can upgrade every machine to a higher level and it looks so much cooler and allows you to make whatever the machine makes by simply pressing a button. The issue is, the machine upgrades cost $10,000. It might not sound like a lot but you are making a measly $200 to $300 per mission. 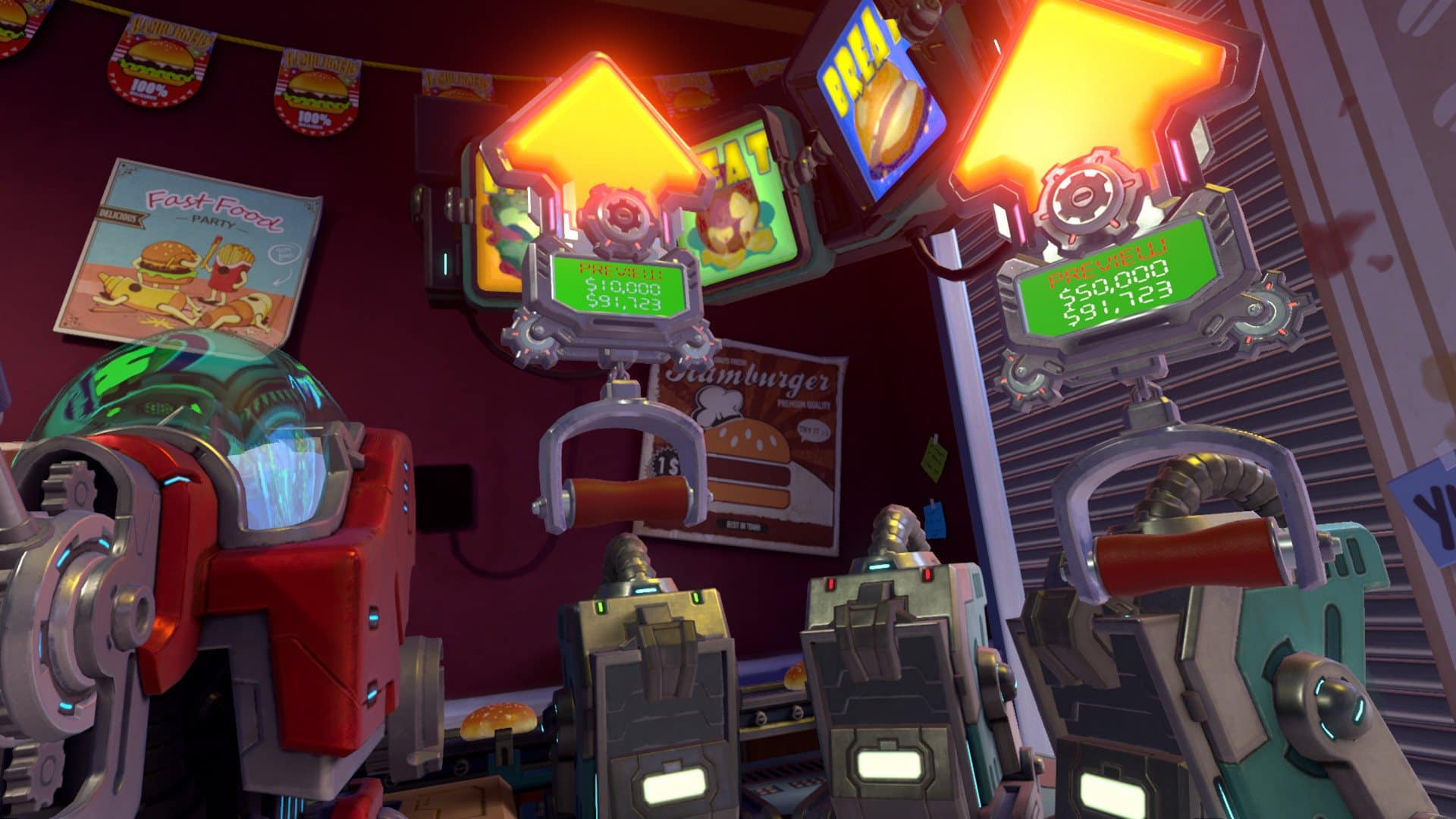 I was over half way to an upgrade after completing one of two chapters in the game. That is halfway to one machine. Chances of being able to upgrade all the machines before the end of the second chapter were zero making the whole process just pointless. If the currency system was a bit more balanced and saw me upgrade every machine by the end of the game and the challenge of the game grow on par with this, then it would have been a fantastic grind to the end of the game. This is not the case.

Instead, I just gazed at these impossible upgrade costs and got over the whole game quite fast. The gameplay is fun and repetitive but if the reward was realistically-obtainable then it would have been worth it.

Later in the game, you can serve “gold” items which are done by shaking a drink and playing with a meat pattie. These are demanded by customers and they pay quite well but even this does not come close to denting the cost of a machine upgrade. 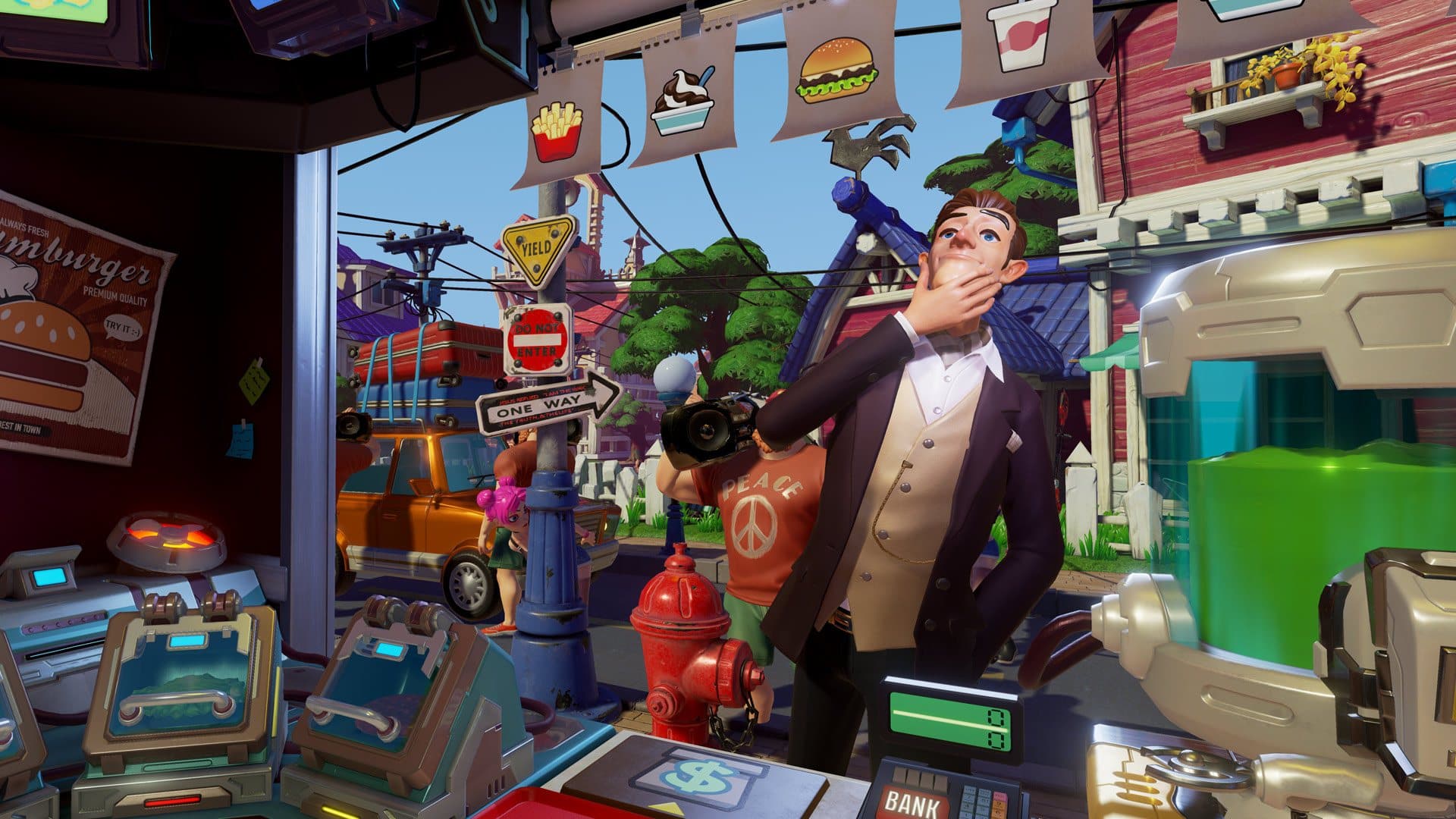 The game demotivates you. It has so much charm and feels so great to play but you would need to sit stand for hours to get through the upgrades making it one VR headache. I would rather have it last five hours and I complete the entire game with all the upgrades than have it last four hours and I never want to go back and upgrade the machines. It is just not ideal.

One box the game does check is visuals and I’m Hungry looks fantastic. The game’s art style and sheer beauty of the machines, people and environments really teleport you into a wonderful world. 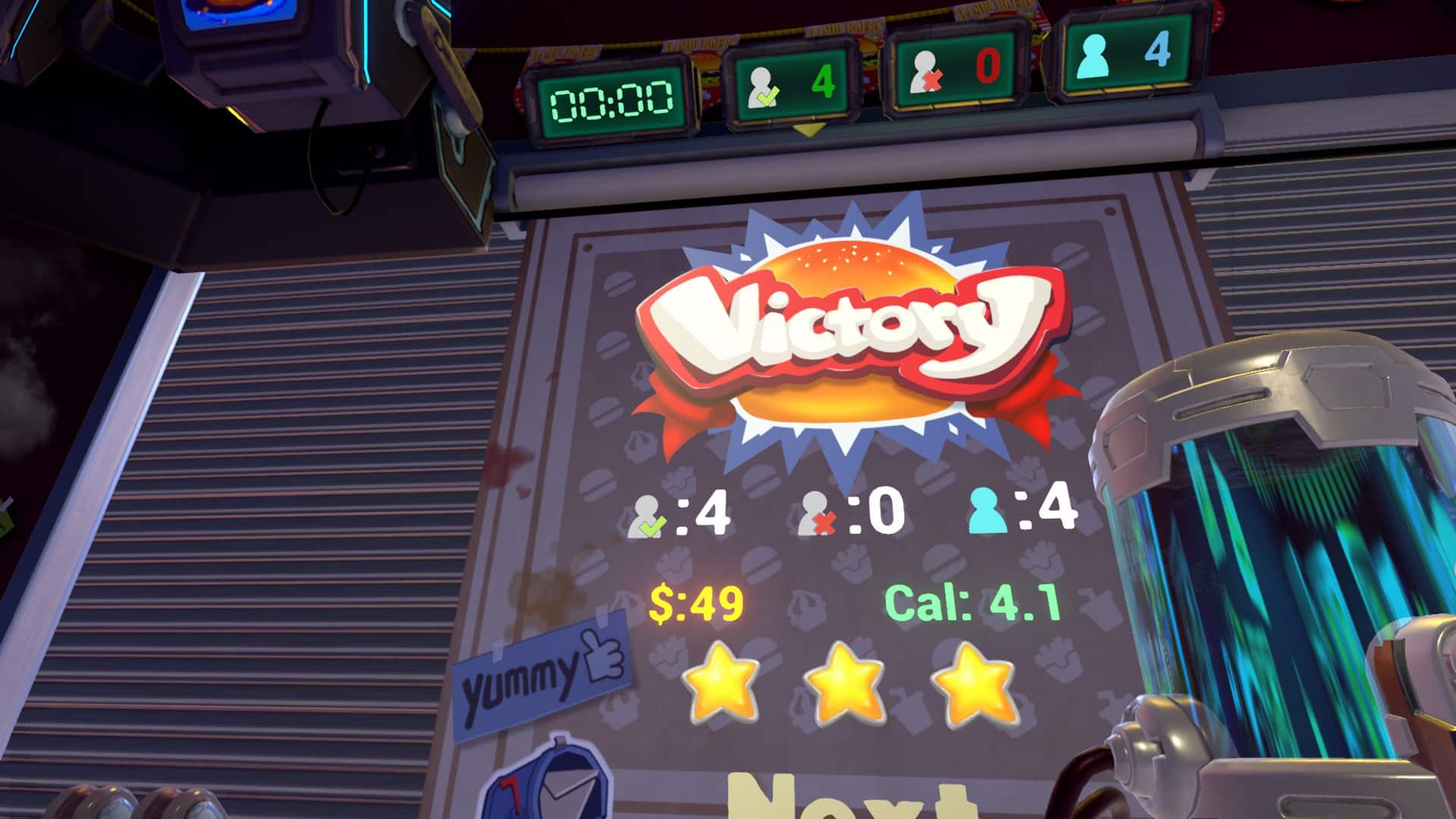 The VR also works extremely well and tracking and movement is fantastic. One issue I had was at the end of every mission (and the start of the game) a giant sign comes up and forces you to stand completely still in a specific position until the bar underneath the sign goes away. It is frustrating and does not clearly state what you need to do. I just stood there thinking the game was loading but it was waiting for me to do something. It is just bad game design.

I’m Hungry is a fun game for a while until you realize you will never experience much of what it has to offer due to its being impossible to complete. The machines need to be upgraded and it would be great if you could get that done but I would never sit and grind my way to $10,000 for ONE MACHINE! Only to have to do it all over again for the other three. If you are really invested in spending your life serving burgers then this is a great game but maybe wait until they have fixed the currency problem or it is on sale.