Ubisoft and its masterful set of open-world developers have cooked up something pretty great with Immortals: Fenyx Rising. Set around Greek Mythology, the game, is clearly inspired by a few other open-world games, is shaping up to be an RPG to look out for this year. If anything, we can see ourselves spending our December break playing it on a new fancy PS5 and Xbox Series X. Not only does its casual humour break away from the current release schedule of games, but the gameplay feels great and the RPG mechanics will make a lot of people happy. However, where Immortals: Fenyx Rising shines the most is in its exploration. Ubisoft seems to have crafted yet another world to get lost in while players solve puzzles, complete side missions and obtain sweet, sweet loot.

Watch the game in action down below

During our few hours with the game, we went from being a weak character with nothing but a sword and a cuirass to wielding powerful weapons and mastering bigger combos and abilities. There’s also this joy of evolving your character beyond just equipment. New gear helps explore the world, you can control arrows when shot not only to help solve puzzles but to also aid in combat. In addition, the world delivers some great visuals which tie this all together. 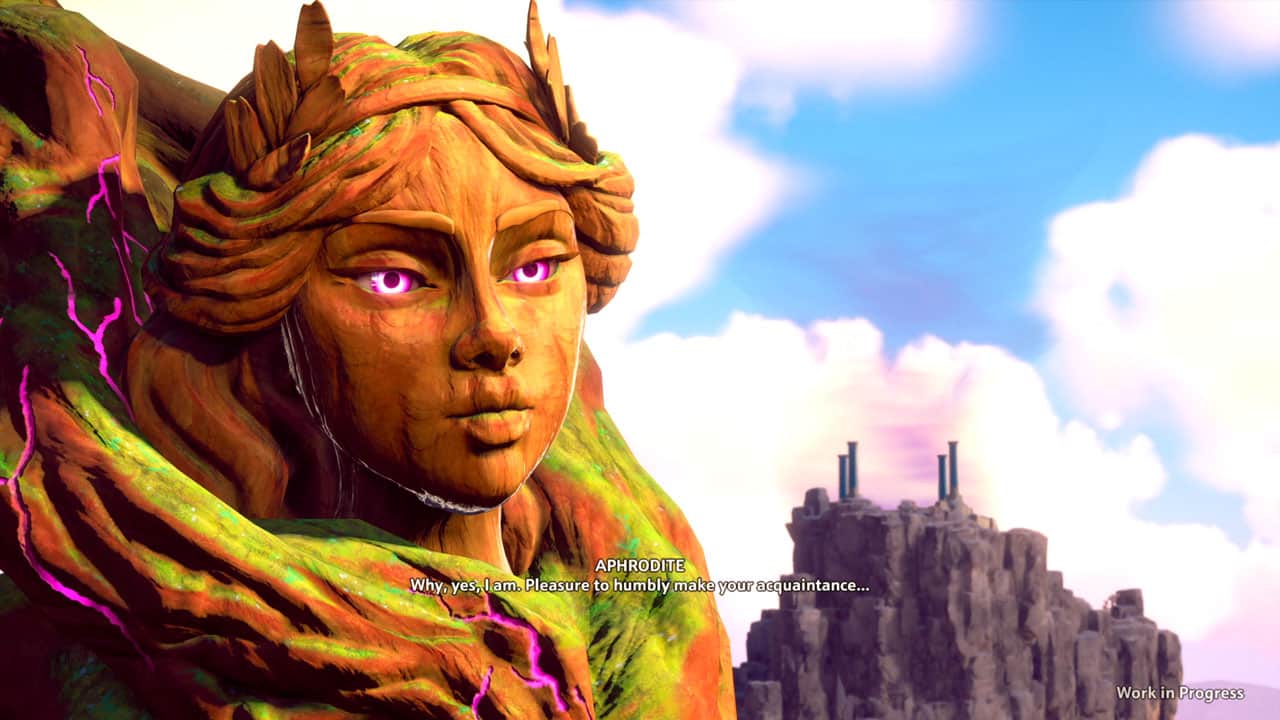 There’s a lot that makes Immortals: Fenyx Rising stand out. Much of this relies on the awesome abilities we gathered throughout our demo. We obtained these by completing rifts which contained puzzles and some enemies to fight. This sort of things kind of felt like a dungeon from The Legend of Zelda and it works. There was this urge to push through each one in order to see what new treasure awaited us in the end. Sometimes it was a new ability such as Zeus’s Lightning which increased our stamina, while other times we got some shiny new gear.

These rifts also provide some challenging puzzles to solve which usually rely on the new gear we obtained. Once we had our bow, we had to complete the rift by shooting down stone blocks to use as weights and then carry these stones using our telekinesis. Some relied on us controlling an individual fire arrow to light a brazier which spawned a platform we used to cross a gap. While these puzzles did not seem extremely tough in the early game, they are still enjoyable to complete. We are looking forward to seeing how they adapt and get harder as we progress with more gear. 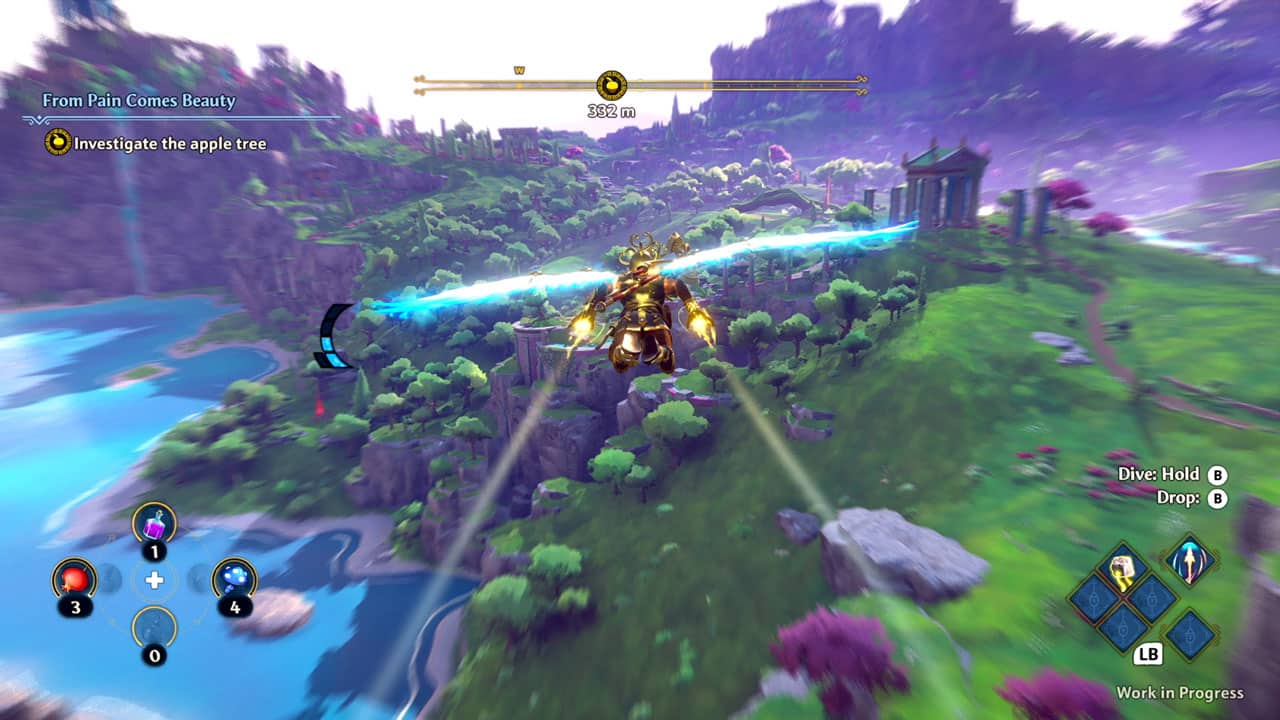 Speaking of gear, a big focus in Immortals: Fenyx Rising is the joy that comes from finding it. If it’s not from exploring and completing rifts, there’s always something on the map to venture to. Be it a temple on top of a massive hill or a hidden cave near a lake. Some of these locations could be inaccessible in the early game due to the lack of ability. However, we could easily place a marker down on the map and return later one. When we did gain access to the treasure chest, they were quite rewarding for our struggle. A Stoneglare Mask, for example, looked like medusa (which was pretty awesome already) but at the same time gave us a 40% damage buff for 6 seconds when stunning an enemy. This meant we could most likely use this helmet with a different ability later down the line.

This same helmet is then upgradable. Once it hits a certain level a second perk unlocked that refilled our stamina after stunning an enemy. This sort of system also means you are not locked out of gear when you progress the game. Sure, gear will be better later down the line, but anything we found had locked buffs which we could unlock later on. It also helps that the gear does not provide any sort of stats boost at all. The character is just as good as his gear even if you are using an axe found in the first two hours of playing. While this system may disappoint hardcore RPG character build makers, we think it will also provide some exciting ways to experiment with complimenting a piece of gear with another and an ability. Not to mention the system is also a lot more approachable. 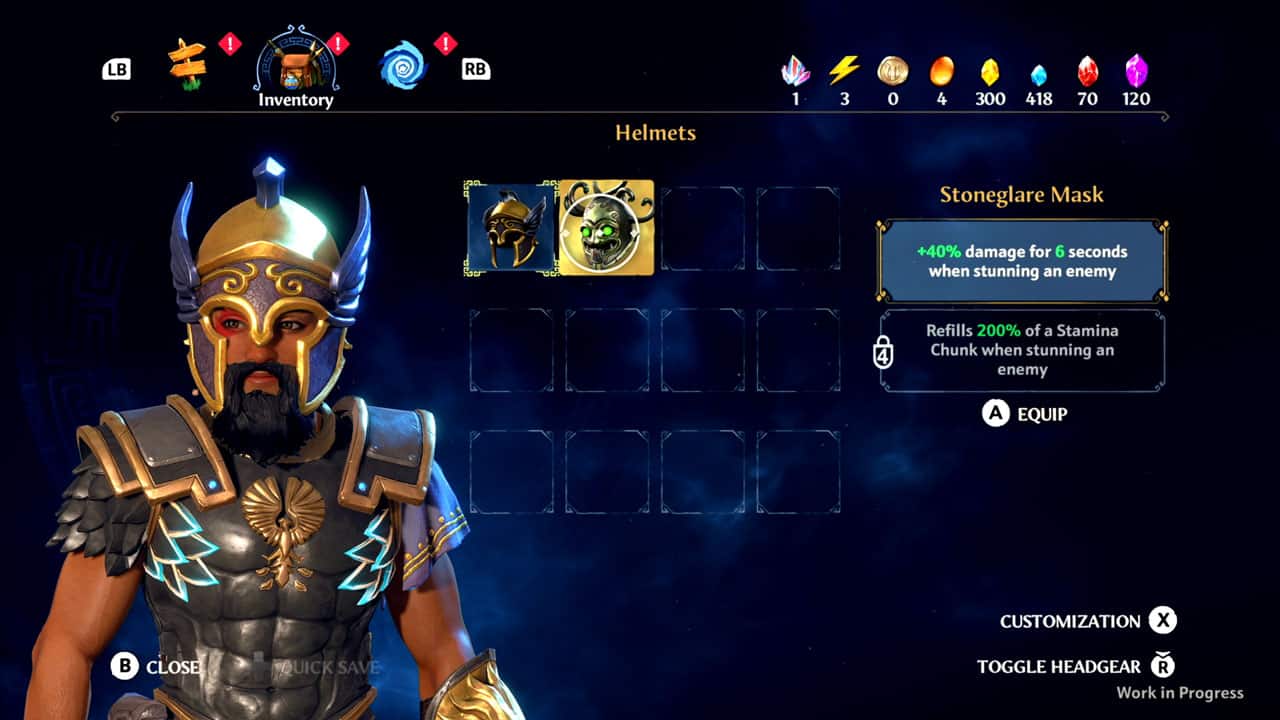 Then we have the exploration which is an absolute joy in Immortals: Fenyx Rising. Getting around is also quite easy thanks to the ability to climb almost every surface and glide in the air from mountain to mountain. Those of you playing Genshin Impact will feel right at home here. The stamina bar depletes as you climb up a wall or mountain and Fenyx can use his wings to flap in the air acting like a double jump. We really enjoyed this system as it meant there was no mountain we could not climb. Thankfully, everyone we did climb held some sort of amazing reward for doing so. Be it one of Nike’s captures fairies or a vantage point we could use to scout the land ahead.

These vantage points helped us target chests, hidden areas and often surprised us with new quests spotted in the distance. Not to mention, the world design here is pure joy too. It kind of made us want to just go everywhere and climb everything. Standing on a statue of Aphrodite and gazing at Mount Olympus was one of our highlights from the demo. The sheer sense of discovery is spot on in Immortals: Fenyx Rising and we can’t wait to climb every watchtower to clear the map in the full game. Combat in Immortals: Fenyx Rising is great. Enemies are tough and you can’t just go in and spam buttons to beat them. Fenyx can also use a range of abilities found in the game during combat too. One of which is the guided arrow which helps get a headshot in when looking to take out enemies from a distance. When it comes to close combat, enemies are no pushovers either. Each enemy has a stagger bar and a health bar. The stagger bar fills up as you attack them. Certain attacks contribute more progression to this bar. Once filled the enemy stuns. This is where our handy Medusa Stoneglare mask comes in handy as we got 40% extra damage for 6 seconds while attacking the annoying guy.

Certain combat encounters really put us on our feet as we had to combine shotting arrows from the distance, running in and hitting the enemy as well as picking up rocks with telekinesis and throwing it at them. We also had to take into account our stamina which is a requirement for pulling off certain Godly Abilities. Ares Wrath saw us leaping into the air while thrusting enemies along with us. The attack not only health damage but also contributed a certain attack to their stagger bar. Athena’s Dash let us dash forward striking all enemies with 5 hits. Hephaistos’s Hammer was a massive slam into the ground that knocked back enemies. It works quite well and makes combat a central focus which oozes into the gear we use and the abilities we learn to master. It unlocked new ways to approach combat, especially for those tough fights. Aside from Godly Abilities which centre around specific weapons and items, Fenyx also has a range of skills to enhanced too. In combat, these don’t cost stamina. For example, basic attacks can can get larger combos, headshots with a bow can increase by 100% of damage. There’s a lot to chew on here and the combat system felt great.

So far Immortals: Fenyx Rising is shaping up to be a real good open-world RPG. It checks all the boxes when it comes to gear, combat and exploration. It has surely been built with these foundations in mind. While the build we played was early and there were some rough parts, we could not put it down. It seems like that game we are going to get lost in for hours and hours on end as we leave no cave unexplored, no treasure chest unopened and no material left to collect. In short, we can’t wait to see more of Immortals: Fenyx Rising when it releases on 3 December 2020. You can find out more about the game here.

This content is in collaboration with Curtis Clarke who spent four hours with the game during a special Ubisoft preview event.