Is Teabagging in Esports Unprofessional?

Is Teabagging in Esports Unprofessional?

It was not until recently that I was asked the question; “is teabagging in Esports unprofessional?” A good friend in the gaming industry recently came under quite some heavy fire after complaining about the topic during an Overwatch World League match. Grant Hinds took to Twitter to complain about the action stating he was “really disappointed by the amount of teabagging that’s going on in the Overwatch World League”.

Really disappointed by the amount of teabagging that’s going on in the @overwatchleague this weekend. You’d never see that behaviour in any other established sport. If esports wants to be taken seriously, decorum and professionalism should be a responsibility of the players.

The tweet has since sparked some debate on whether or not this is actually the case. Does teabagging in esports damage the sport’s and player’s professionalism and why does other sport not have a similar response? Then again, celebrating with slide across the field after scoring a goal or doing those ritualistic dances after getting a try could be that said sport’s teabag. Does not mean they aren’t sexual that they don’t have the same meaning?

If you ask me, I despise the idea of teabagging. It is the lowest point anyone can go to show off their masculinity. Do I teabag in video games? Of course, I do. However, at the same time, I feel dirty doing it because I burn inside every time someone does it to me.

There’s nothing better than a cheeky spam of the circle button to show how badly you beat someone, killed them out of a super or simply destroyed their ego in some way or another. Don’t get me wrong, I don’t go around teabagging everyone I see as the “emote” (dare I say) is reserved for the rarest of occasions. I can assure you that every time I do it, there’s this weird sensation of “yeah bitch, you got destroyed” combined with a little bit of embarrassment for shoving my digital sack in their face. 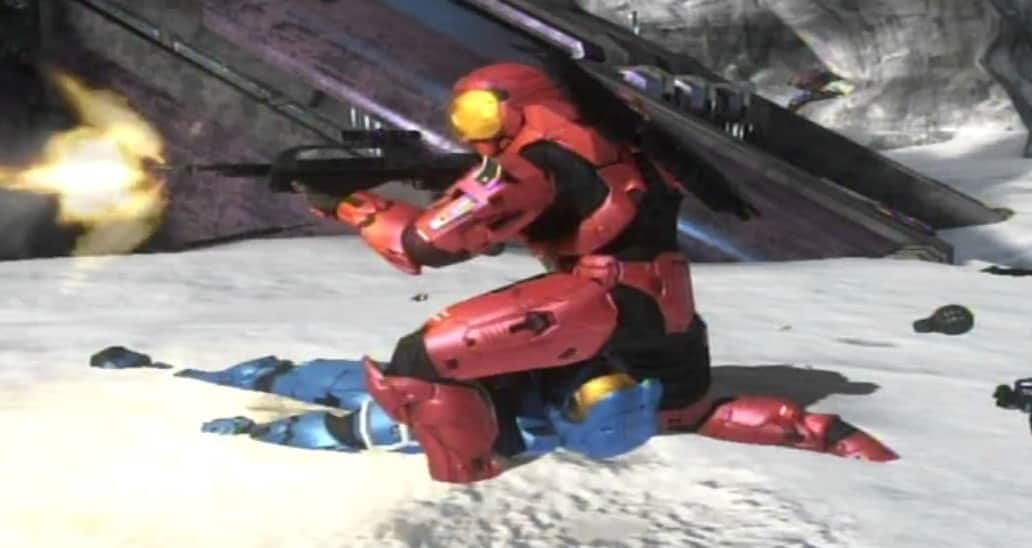 Above – Halo – a video game made popular by teabagging. They even included head movements in later releases of the game.

When I am with a group of friends, teabagging is the cool thing to do. You laugh about it, kill someone and do it again because the “bros” make you feel like it is okay. But is it? What about a simple emote as video games have now taken them to some rather cheeky levels. Anyone that plays a PvP game with emotes can relate to this. Eating popcorn over someone’s corpse that you just killed or doing the floss dance at the end of the Fortnite match is a lot more entertaining than putting your digital balls into someone’s mouth. Well, I think so anyway. We all have that one emote that is just extremely irritating and you would hate the opposing player for using it on you after destroying you in a match.

But what about the “professionalism” or lack thereof of using the action in an esports match? While I get the action is now mainstream, the question will be answered in a different way no matter who you ask. If you are being sponsored by Coca-Cola and you become known for your teabagging in an esports match, do you think this “family” brand will be okay with being associated with a player that uses an over-sexualized move at every opportunity? Because let us face it, go onto PornHub and teabagging is exactly what you are doing in the video game but without the hairy nutsack. Sure, it has a different level of dominance in a video game, but the idea is still the same; ie, balls in your mouth.

Sex is for adults whereas video games are meant for everyone, and for someone to be looked up to by young players only for them to teabag is kind of a douche move don’t you think? I guess it all comes down to what level of human are you? I am on the fence about it because yes, it is a classic video game expression that has been around for decades but there’s no denying that it is a scum thing to do. Then again, entertainment sells and on the grand stage, a teabag will no doubt get the crowd cheering (well, those who love the idea of it anyway). I have never played a competitive game in my life so I would not know.

Now take esports which is a professional sport and merge the two together. Do they fit? It is a question I want to ask you all. If an esports player would to teabag every downed opponent, does that make him a better player in your books or does it degrade a player’s level of professionalism? Or should we just all shut the hell up and have fun playing games? Let me know in the comments below. You can also catch up on the debacle here on Twitter.

Header image credit: This is why I’m Broke

Now Read: “Birds of Prey” Gets New Title to Try Get People to Watch the Movie