It is hard to believe that Hazelight Studios, the same team that brought us the dark and gritty “A Way Out“, crafted It Takes Two. It is a complete 180 compared to what we experienced in the studio’s previous co-op game. For starters, this colourful romcom takes on a whole new genre of platforming, puzzle-solving and action. It is also quite an emotional tale of heartbreak, divorce and a family being torn apart by separation. Of which many can relate to.

Check out my gameplay preview for It Takes Two down below

But throughout my tw0-and-a-half hours with It Takes Two, its magic comes from how surprising its gameplay, story and dialogue is. Not one area in the game felt the same as the one I just completed. Not one puzzle is repeated and the sheer randomness of the game’s mechanics and gameplay makes it feel like watching a superb Pixar animation where there’s no budget or limit to its possibilities. I often sat back in complete awe with a massive grin on my face thinking about how challenging it must have been to deliver a game that offers up so much variety.

Often, within an hour or two of playing a game, we kinda know how it works and what is happening. Not in It Takes Two. Instead, every chapter threw my brother and I into the deep end as we got new tools to use, enemies to fight, intense chase scenes to master and hilarious dialogue to back it all up.

It Takes Two follows the story of two dolls who have been brought to life through the magic of tears. These two dolls are actually a mother and father that just announced their divorce to their daughter. She makes dolls and asks a very special book of love called Dr Hakim to help bring them back together. By some crazy magic, the parent’s souls enter these dolls leaving their real bodies in a dormant state.

This is where It Takes Two kicks off. Each player takes on the role of either Cody or May and each character packs their own personality, jokes, and most important of all is entirely responsible for their own objectives in the game. This means you cannot pass off your tool to your co-op partner so the playthrough you have will be its own unique experience from start to finish. This not only adds another level of replayability to the game but it also meant that every chapter has given Hazelight Studios the opportunity to deliver something completely fresh in terms of gameplay.

It works. As I mentioned before, the special early access demo I played of It Takes Two consisted of two chapters. The first chapter familiarized us with the game and characters. May is a pretentious wife who is sick and tired of Cody’s laziness and Cody is well, not the sharpest tool in the shed. Often his dialogue made me chuckle as he lacks even the basic knowledge about a subject but tries to pretend he is wise. Without a strong cast of characters, It Takes Two would have been just a great platformer so the combination of both makes it so great. In the first chapter, I played as May and my bro as Cody. This chapter relied on introducing us to the general mechanics of the game. Running, sliding, jumping, sprinting and bashing down onto switches to activate doors and platforms. Later in the chapter, we got our first set of tools. Literally, they were tools.

I got a head of a hammer which I put on my back and used to slam down on objects. I could smash glass bottles, switches and even run around squashing Cody over and over again. Probably my favourite part of it all. Cody, on the other hand, got a set of nails he could toss across great distances and stick into wood. The two tools were vital to overcoming the challenges that the level threw at us. My brother, Cody would toss the nail into a wall and I would use the hammer head to attach to it and swing my away to the other side. 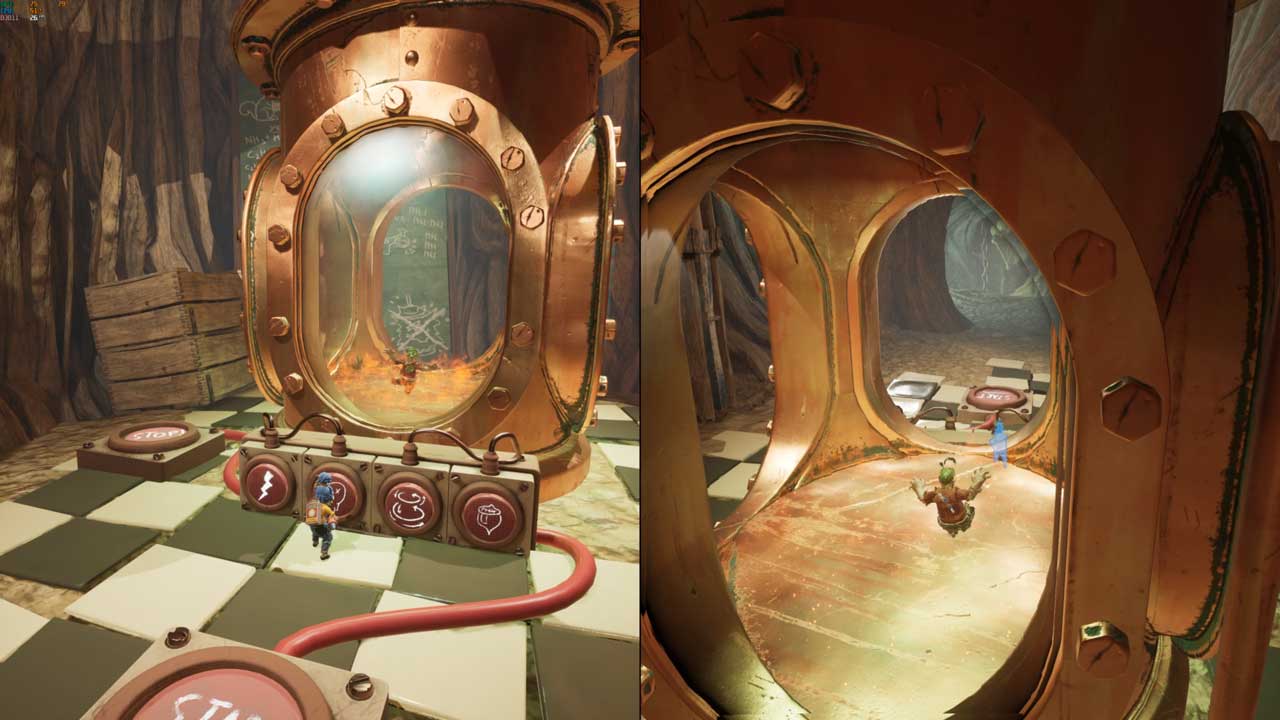 The puzzle mechanics then got a bit tougher as Cody got three nails and had to juggle pulling them out while throwing new ones to lift platforms against a wall and get me safely to the top.  It relied on me telling him which one to activate and timing my jumps and swings to avoid my death.

Beyond the tools, the first chapter also delivered some great mechanics that all tied to a vacuum cleaner and sucking and blowing air to either propel the dolls across gaps or toss bombs at a boss. We also had to control the airflow by riding the hose to lift it or drop it down. This is where It Takes Two shines the most. Hazelight Studios has taken common everyday household items and merged their actions into puzzles and in-game mechanics. It is simply pure genius. 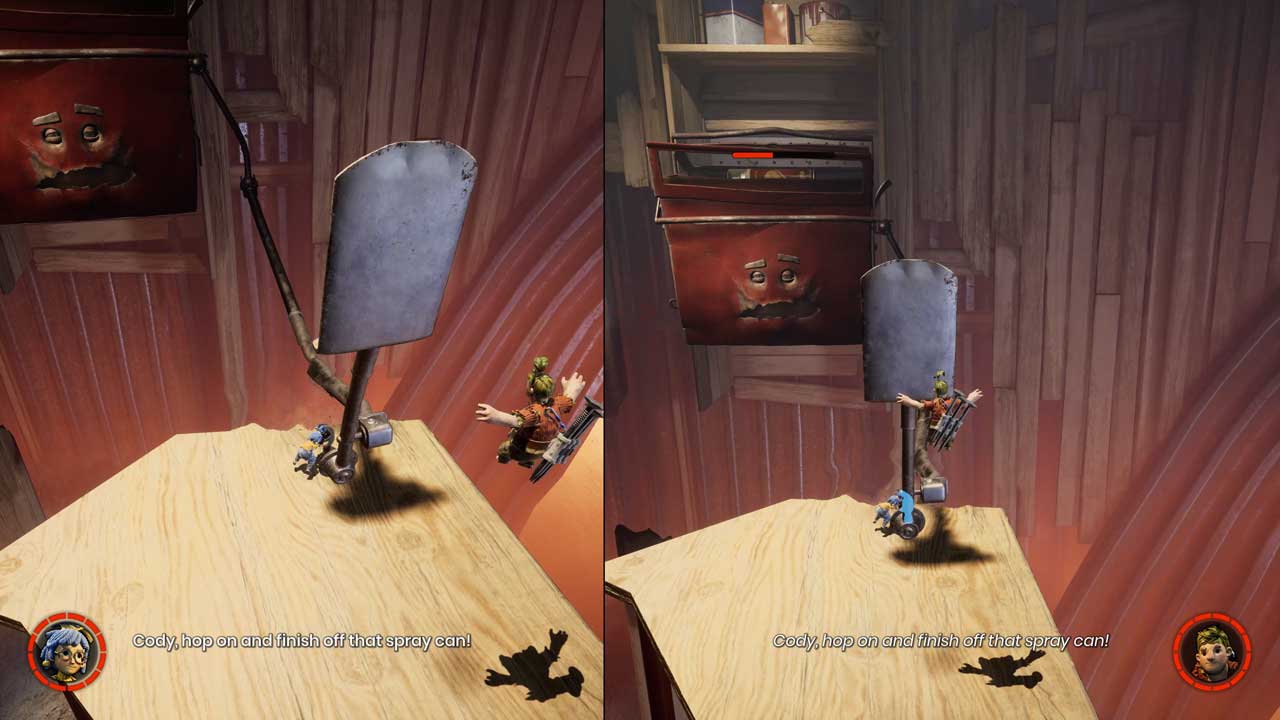 Of course, there’s always the opportunity to kill your partner and when these moments popped up, I was in stitches from laughter. Do I leave the bridge up for him to cross safely or do I drop it and kill him? Do I drop the platform so I spinning blade does not chop him in half or do I watch him die and laugh like Ezma? You never know what the game will throw at you and whether or not you’ll take advantage of the death your partner will never see coming.

Speaking of partners, It Takes Two also includes a range of mini-games that are cleverly designed to put your friendship and relationships to the test. One example of this was a “Whack a Cody” game where my brother had to peek his head out of the various holes in a box and I had to whack it to get points. If I missed he got a point. The first player to a set number of points then won. This left us both on the edge of our seats I tried to predict his next move while he tried to fool me. Again, this is a perfect example of It Takes Two taking simple mechanics and ramping them up ever so creatively. 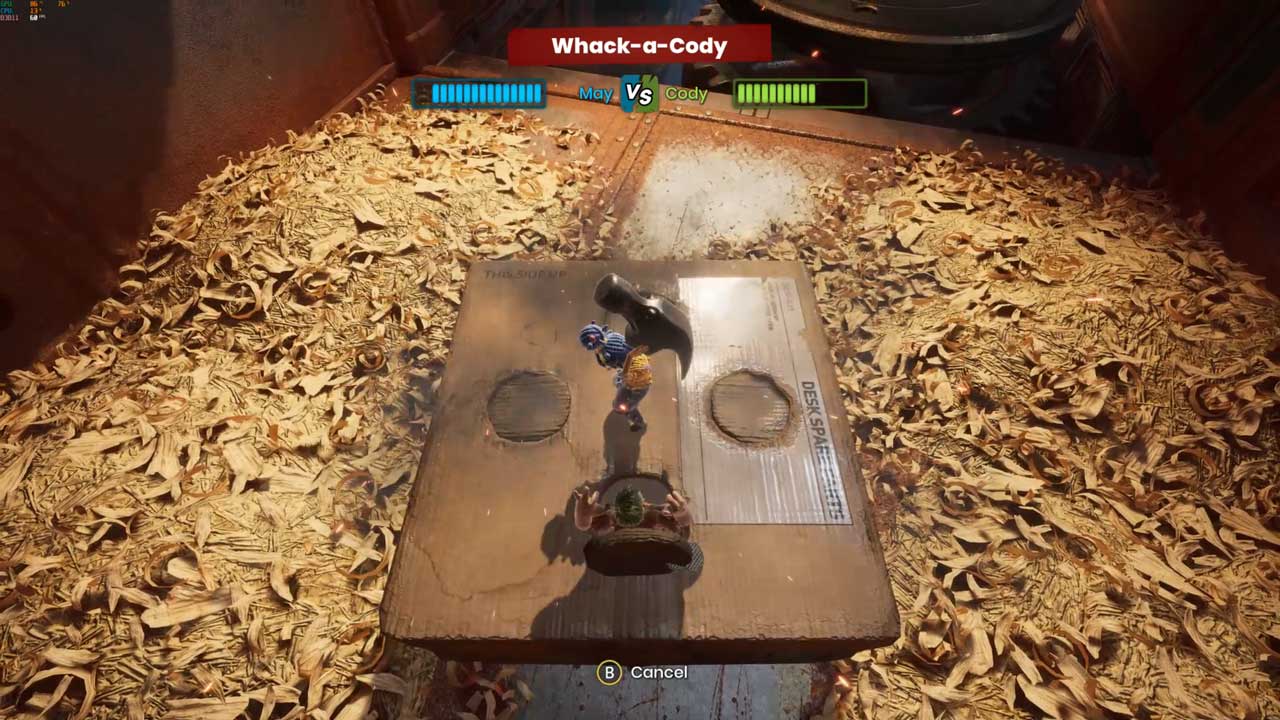 I don’t want to spoil much of the second chapter for you because it was truly remarkable but It Takes Two gets better and better through every act you play. The second one equipped us with a flammable nectar Cody could shoot out of a squeeze bottle like a minigun. I was then given a match gun that could light the fluid and blow stuff up. A crazy group of military squirrels gave these weapons to us and tasked us to go and destroy the wasp nest and its queen.

Needless to say, the chapter involved intense combat encounters where Cody had to wet the wasp swarms with nectar and I had to blow them up before being killed by them. This mechanic also fed into the puzzle gameplay and even some mini-games. 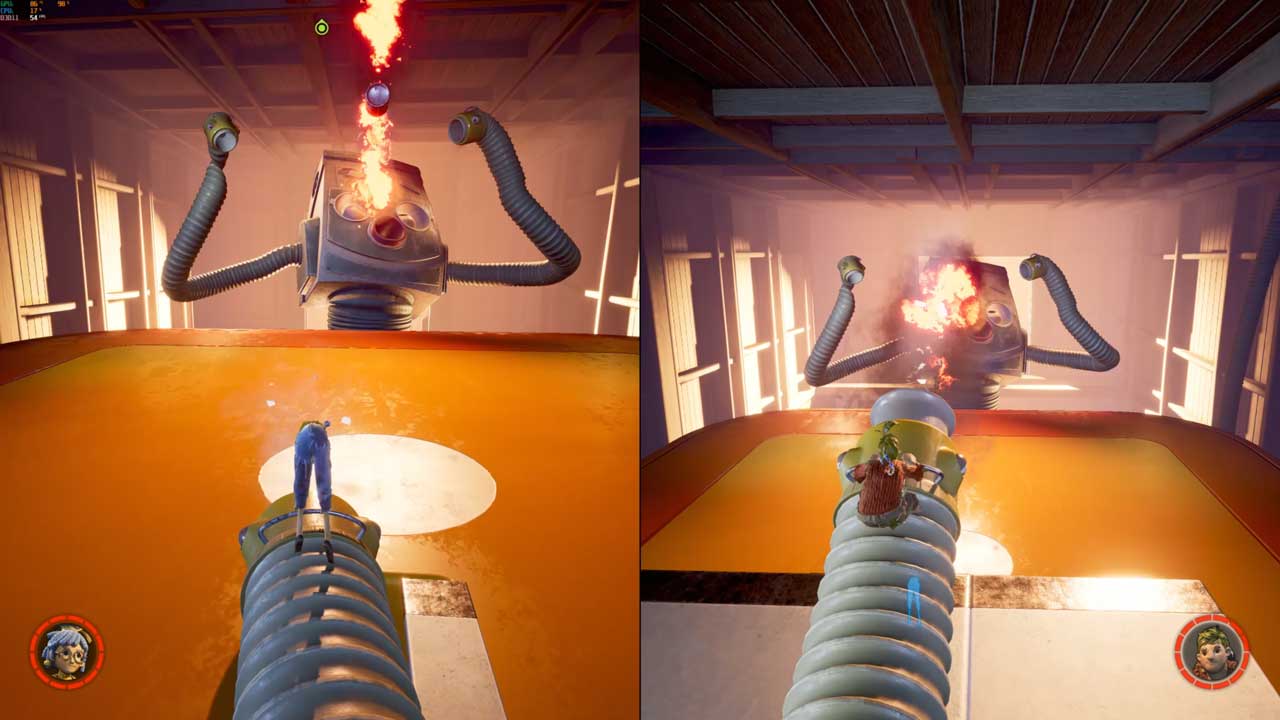 Some stuff goes down which I don’t want to spoil for you but it ended with us flying out of the tree using a makeshift aeroplane made with Cody’s underwear. We flew through tight holes while shooting and burning traps in the way and enemy turrets that tried to shoot us down. Of course, Cody flew the plane and I fired the gun. It all came to a rather epic finish when I had a Tekken-like fight on the top of the damn aeroplane and had to kick some squirrel ass.

Sound remarkable enough for you yet? Well, I hope so because it really is. I only played the game for just over two hours and I was miserable when the demo ended and I could not continue. I wanted to see the next length Hazelight Studios went to change things up. I wanted to find the next mini-game to beat my brother. I wanted to fight the next boss. I just wanted more.

This is only because the two-hour demo was so refreshing that it was hard to put down. Nothing felt the same. Every location was immaculately detailed and every puzzle, combat encounter and mechanic was a breath of fresh air. I have never played anything like it before. 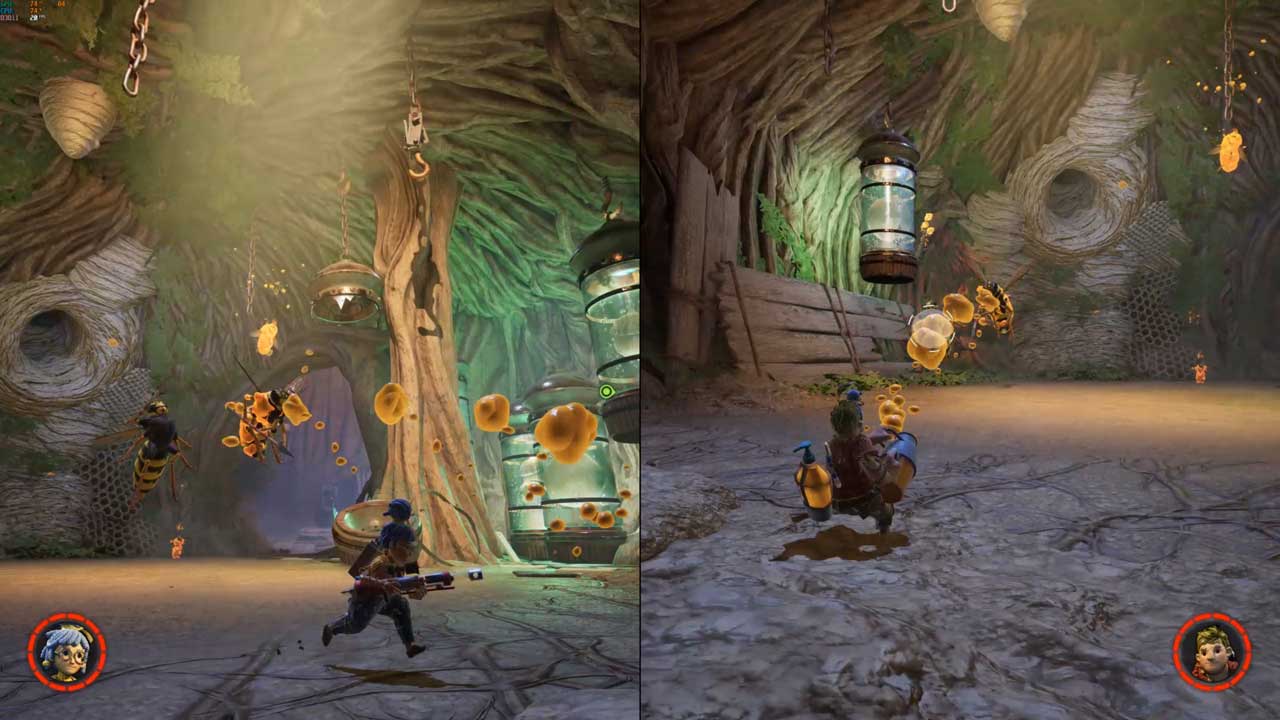 Not only does It Takes Two rely on co-op and making sure both players are vital in every scenario but it is also such a refreshing escape from the mainstream gaming world. Its writing is amazing and the general gameplay is buckets of fun.

We still have some time to go before we can play the full It Takes Two. The game is set to launch on 26 March 2021. If you even remotely enjoy co-op games then you need to have this on your list. It might just completely redefine what you know about co-op games. Find out more about the upcoming It Takes Two game here.

PrevPreviousY: The Last Man Comic Series Could Be The Best Read During This Pandemic
NextAliens Fireteam Co-Op Survival Shooter Announced for 2021 ReleaseNext