Anyone who played the original 2012 release of Kingdoms Of Amalur will feel right at home with this remaster. Sure, the new version includes some tweaks to the gameplay such as a Very Hard mode and the option to equip eight abilities onto your bar at once. However, the general experience here remains untouched. This works both with and against the game. Most of the time, Kingdoms Of Amalur: Re-Reckoning is a wonderful RPG to play through.

Its great quest design drew me into the world and its characters thanks to the brilliant writing and voice work. Its combat is now even more fleshed out than before thanks to the additional four abilities. Not to mention the Very Hard mode is well, pretty tough and compliments the fantastic combat system. However, the game still suffers from an uninspired world that often feels empty. There’s very little padding to keep you intrigued for hours on end and it takes a lot of effort to keep going after a long burst of gaming.

Kingdoms Of Amalur: Re-Reckoning remains the same when it comes to the overall plot. A gnome created a device called the Well of Souls which can bring people back from the dead. After countless failed attempts, your character is the last and only success. I got to create a character using some basic presets and was born again from the well. After a brief tutorial-like mission, I was dropped into the Faelands and could go anywhere. For the most part, Kingdoms Of Amalur: Re-Reckoning seems to have fixed a lot of progression issues found in the original game. More than ever, it feels and plays like a traditional RPG now. The level cap system is no longer an issue when entering a zone and throughout the game, enemies scale to the player depending on the difficulty selected. Previously, you could enter a zone at level five and enemies and loot would remain at that level throughout the game. The new system makes a lot more sense and seems like a feature that should have been in the game in the first place. It meant I could venture anywhere I wanted to return back without worrying about enemies being a pushover. The game’s challenge remains present throughout the campaign now. Thank the heavens for that.

The game also includes some other tweaks here and there. Loot now drops items which fit into your current skillset. I used a hammer and a staff more than anything else and boxes dropped more of the same weapon type and armour to compliment it. The game also detects if you are not getting decent loot and after a while drops rare gear to make up for it. 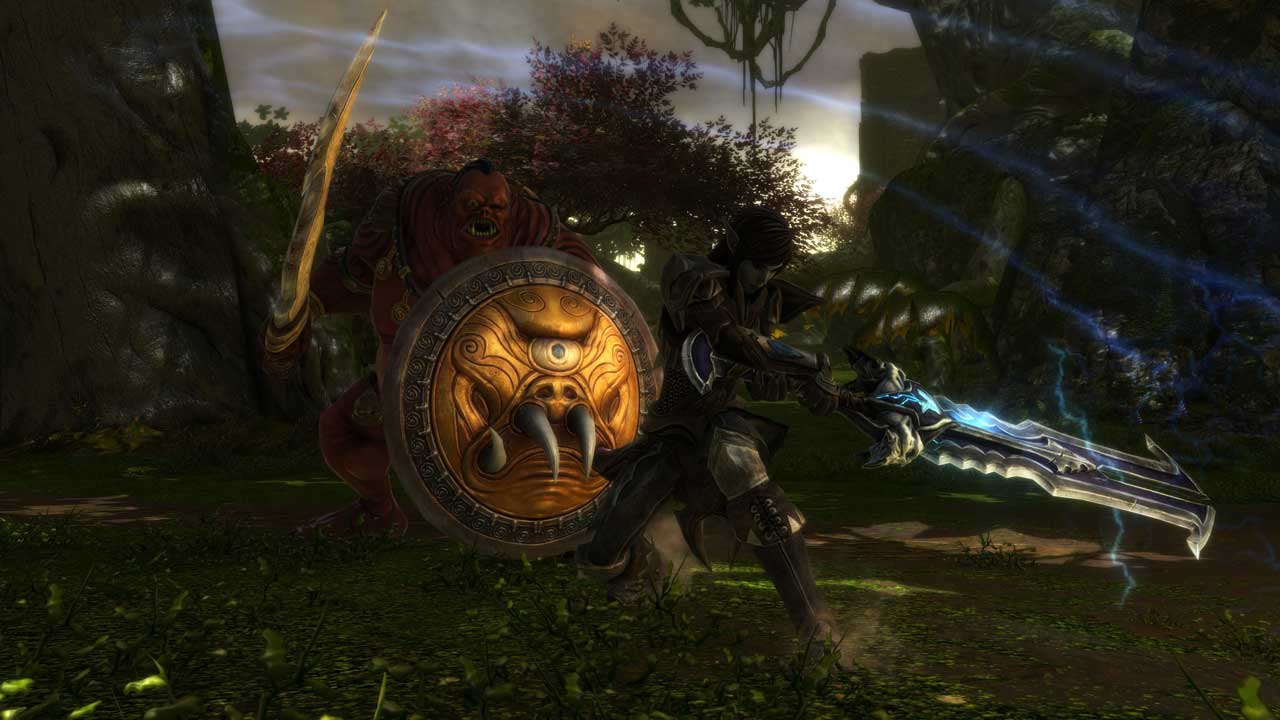 These systems help deliver a more polished RPG experience in Kingdoms Of Amalur: Re-Reckoning and all of it feeds into the most important and best feature on the game – the combat. Kingdoms Of Amalur: Re-Reckoning includes a fantastic combat system that challenges your wit and responsiveness. Throughout the game, I unlocked skill trees that improved on spellcasting, melee, sneaking and ranged. However, the real joy here is the ability to equip almost anything across two slots. You can have a bow and a hammer, or a staff and some daggers. There are some great combinations here and unlike most games which restrict you from using magic or melee, I could do both.

This feeds into the combat system as I rolled around, threw a lighting ball at a giant spider and then followed up with a massive swing from my hammer. The new eight ability tree also delivered some fantastic combat moments as it meant double the number of abilities are mapped to the character. It works and kind of felt like something the original game should have had in the first place. This meant I could equip a ground-shaking quake attack with a stacking elemental blow and a mana shield. 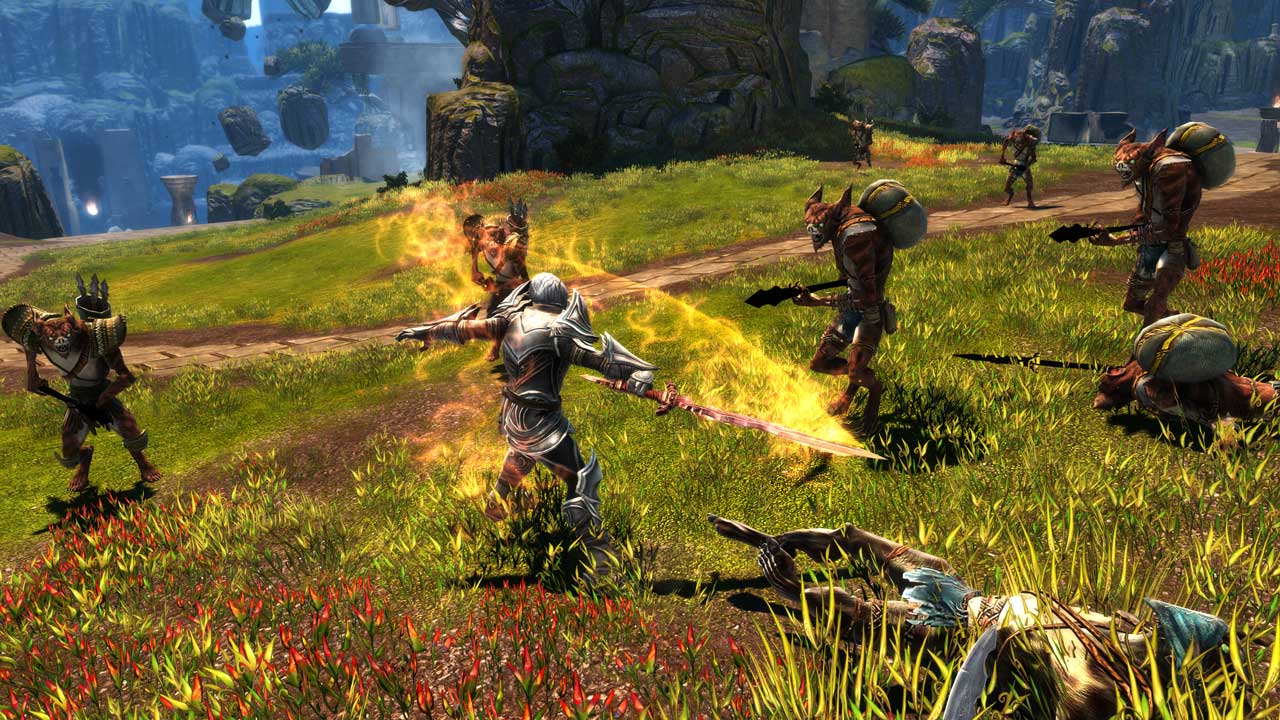 The extra abilities also forced me to increase the difficulty of the game too.  More ways to kill enemies meant they died quicker and became a pushover. I made sure the game delivered a challenge throughout the experience and increasing the mode was the perfect way to ensure that happened. It also helps that Kingdoms Of Amalur: Re-Reckoning has some fantastic combat. Every blow felt great and every weapon was fun to use.

At one point I could not decide what to stick to. Luckily, the game’s progression system is quite versatile and moving from a hammer to a greatsword just meant finding one and equipping it. If I wanted something different I just equipped it. If it meant I had to respec my character then so be it. It is the joy of playing an RPG – creating builds, trying out new weapons and mastering the combat. Kingdoms Of Amalur: Re-Reckoning is not short of this by any means.

Kingdoms Of Amalur: Re-Reckoning is not without its issues. While the combat is great, the game’s bland world and cumbersome UI and inventory is a chore to get through. The UI has been literally copied and pasted into this game. Menu font is low resolution, button prompts are massive and the overall experience is tricky to get around. The UI definitely shows the game’s age. The world is also still quite empty even though the developers claim they added more monster spawns into it. Running around an open area zone is just dull with nothing to see or do. Sure, there’s a box to lockpick but even that provides a copied UI experience with no real change at all. 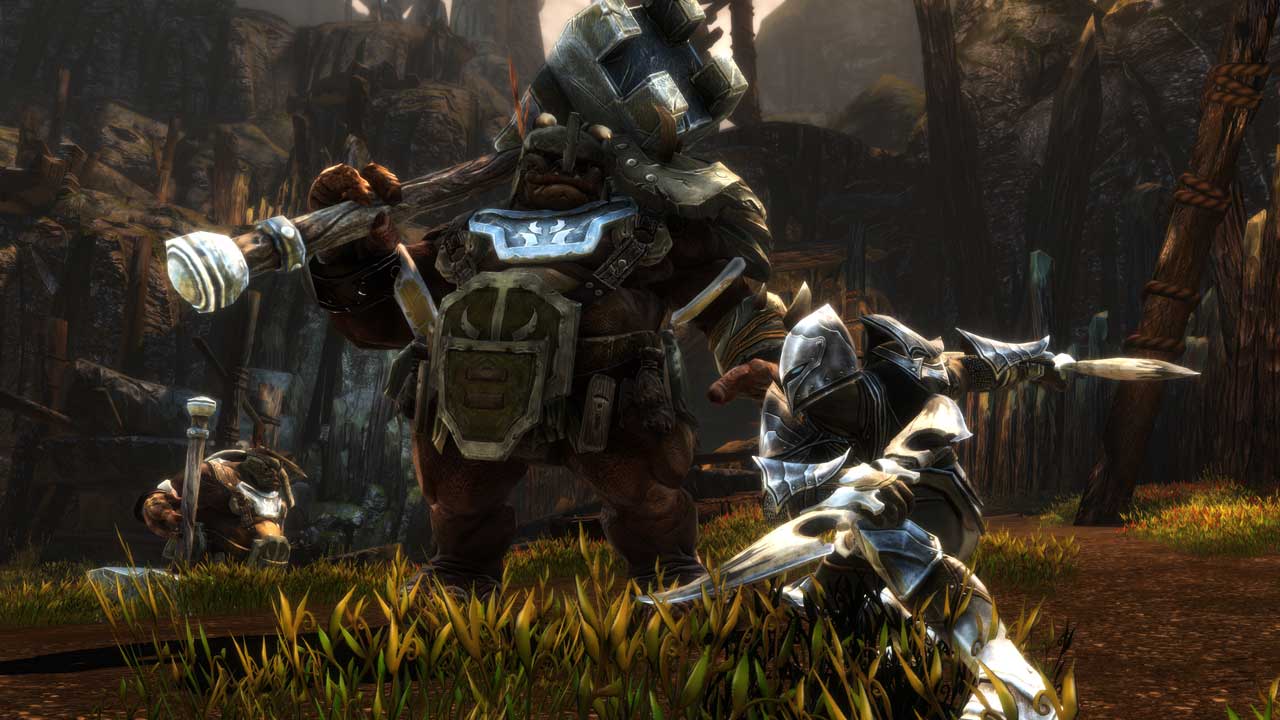 Visually, the remaster looks okay. Character models are sharper and the resolution is crispier. There’s nothing fancy going on here such as improved lighting and a remastered soundtrack. The game has simply been copied with a few changes to the settings.ini. It is far from groundbreaking. Not to mention the bugs. I had so many crashes on the PS4 Pro. Loading times are also very long and I ran this on my WD_Black P50 SSD. There’s very little to load in terms of assets so this just boils down to poor optimization.

The game is set to receive a brand-new expansion in early 2021. It is going to be interesting to see if this content brings any new visual tweaks to the game. In addition, we can only hope for new weapons and gear. The question is do you wait? I am not quite sure right now. It is all about how much you want to revisit this game. Kingdoms Of Amalur: Re-Reckoning is still a solid RPG that will scratch that itch for you. While it is nothing more than a port given its lack of visual changes, it is still a decent game nonetheless. 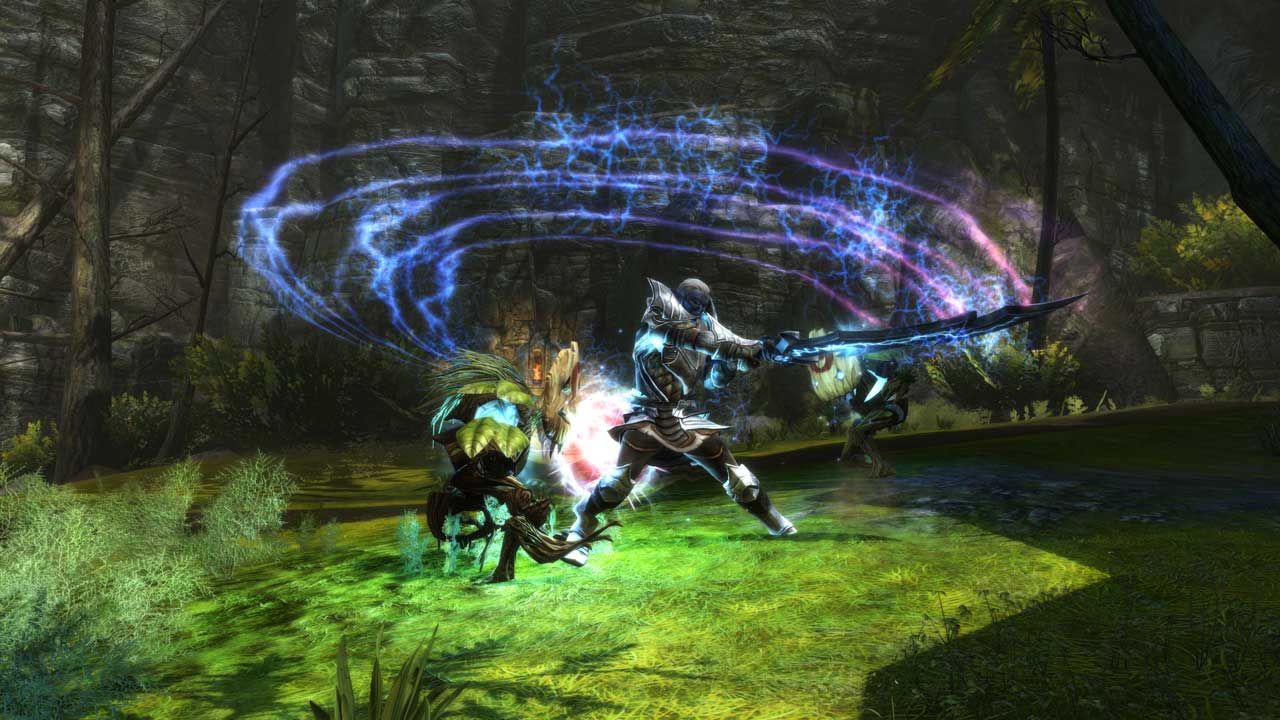 The world is a very different place compared to in 2012 when Kingdoms Of Amalur released for the first time. We have had massive RPGs with genre-changing worlds. It is hard to recommend Kingdoms Of Amalur: Re-Reckoning. Sure, the combat is great and the main quest is enjoyable but the world and everything I did besides that was a chore. If you have no other RPGs to play then this makes for a fantastic time consumer. Hardcore fans will also enjoy the tweaks to the combat and difficulty. However, beyond that, there is nothing much going on here.

This Kingdoms Of Amalur: Re-Reckoning review is based on a code sent to us by THQ Nordic.