King’s Bounty 2 is a strange blend of RPG and turn-based combat to the likes I have never experienced before. While I was exploring the world, I met new people, looted treasures and completed side quests. You know, like most RPGs. However, King’s Bounty 2 completely flips the genre on its head during combat as the game enters a sort of hex turn-based system. It was here where I moved about the reinforcements of soldiers and monsters I had amassed during my exploration and tried my best to use their skills to take down the opposing enemies.

Usually, in RPGs, players would focus on growing their party with new gear and equipment but in King’s Bounty 2, my real focus became about buying new troops and keeping them alive. I have got to say that this unique gameplay approach goes a long way in making King’s Bounty 2 fun and the combat works for people who both enjoy RPGs and strategy games. Unfortunately, the game does suffer from some rather mundane other features like a boring story, slow exploration and uninteresting characters that often overshadow the great combat.

King’s Bounty 2 starts of strange. I got to choose between three playable characters that decide the overall flow of the game’s progression. I chose the magic lady named Katherine. I have no idea what happened in the previous game to land the main character up in prison but I started locked up in a cell. Katherine has been accused of trying to assassinate the king but gets pardoned in order to go investigate a plague that is looming in the kingdom.

From that point forward I was free to follow the story and explore the world. For the most part, King’s Bounty 2 doesn’t overcomplicate its systems and gameplay. Within the first 15 minutes, I kinda had my thumb on everything going on and how to manage my troops in the field and maintain my character. It also never felt complicated enough to get lost which is fun too. Sometimes a more streamlined approach is not a bad thing. 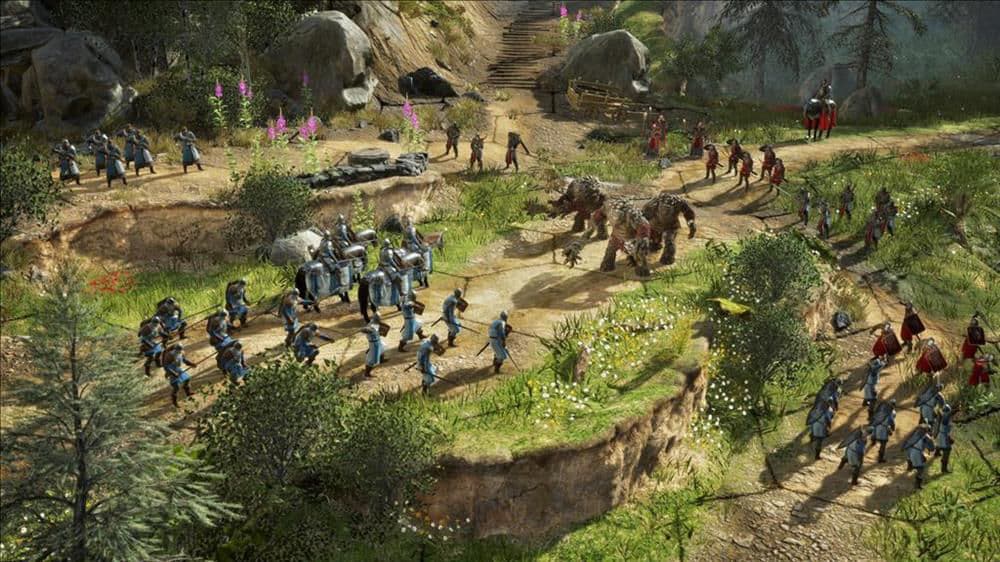 The overall exploration in King’s Bounty 2 saw me explore fairly large hubs that offered a decent amount of side paths to discover, items to loot and even side quests to complete. Getting around is slow and painful at times. The character slowly jogs around the area (even while sprinting) and there is also a horse that can be summoned and mounted. However, getting on and off the horse feels like it takes way too long so often I just walked the short distance. It also doesn’t help that the game world interactions are limited while on horseback so I had to get off the damn horse every single time I wanted to open a treasure box.

Throughout the game, I met new characters while completing the main quest. Side objectives were often short and enjoyable even though the dialogue and pacing leave a lot to be desired. Some quests also relied on the game’s choice system. For example, I could kill one person or try and find a non-combat way to complete the quest. These choices then contributed to the game’s trait system that levelled up specific perks depending on my path of choices. For example, after sticking to hard-headed combat, I could then benefit from specific troops joining my team as well as unlock new dialogue options. However, my path led me to lock out other peaceful ways to overcome a problem in a quest. 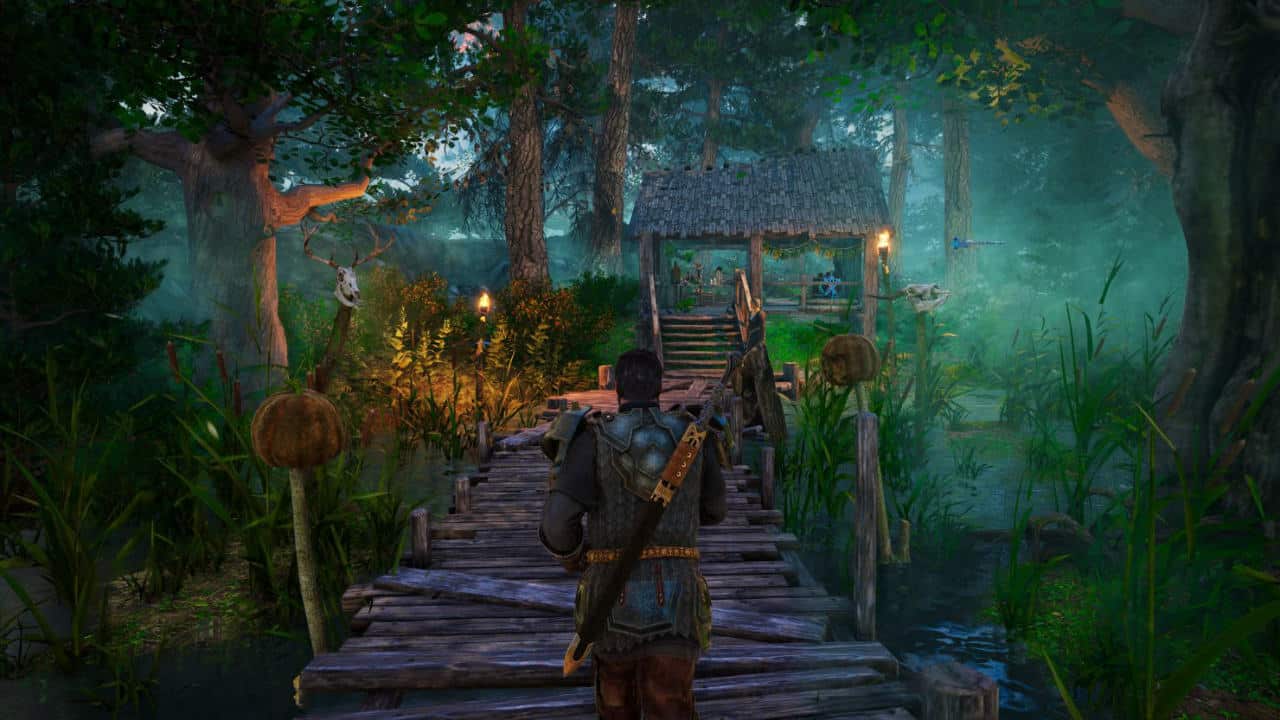 Combat is really where King’s Bounty 2 shines. During each battle, the troops I had chosen are placed down on a grid and have to move around the area and initiate commands I set off. There is a fairly good range of monsters and soldiers to find throughout the world and each troop comes with its own perks. Archers are great for sitting at the back and shooting enemies in the distance. Magic wielders are weak but often come with powerful attacks that also debuff the enemy and apply a status effect. There are also tanks and heavy troops that I sent out to absorb the damage.

In a turn-based movement system, the King’s Bounty 2 combat flows nicely and allowed me to control the battlefield carefully. I had to also learn the enemy attacks while juggling my army and the pace of the fight. It is good fun. My character could also use spells which I learned while progressing through the game. These spells rely on Mana which is a rare resource but dealt heavy damage. There’s also healing and other useful spells that increase the strategy aspect of the game. 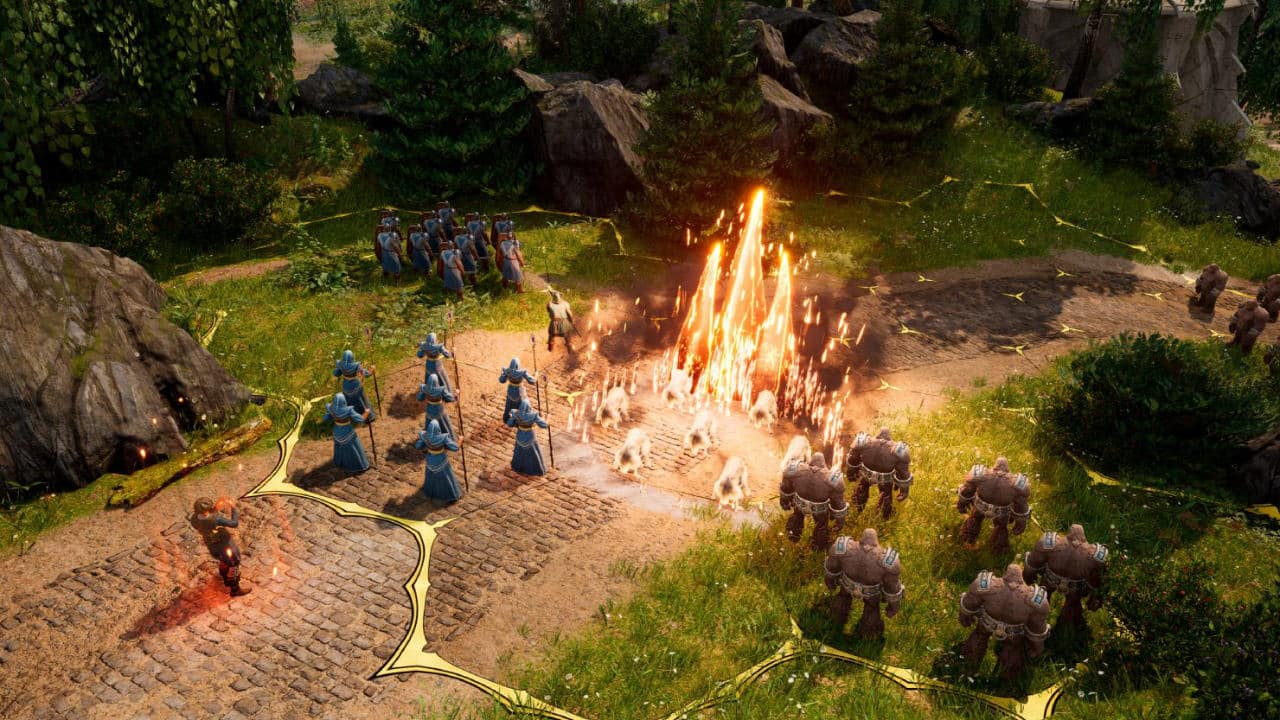 Of course, there was also a massive risk in combat too. This is due to the fact that when my units died in combat, they were dead for good. I had to go back and purchase new ones from the various merchants across the world. This can be a pricey experience, especially in the later game when troops are expensive.

I made an effort to save as much as possible to avoid permanently losing my troops in a surprise boss fight. It is also a pain that these merchants all sell different troops and you can’t see what they sell from the map when you fast travel. This forced me to always backtrack to a few stores to find that healer which was a godsend to my team. The whole system relies on strategy and while it is not the deepest system around, it carried the game through the most tedious moments.

King’s Bounty 2 is not the most visually breathtaking game around but it works. Unfortunately, the PS4 version, which I played on PS5, looks a bit rough around the edges. The game visuals are blurry, details aren’t rendered until you are close and even the combat looks like a PS3 game. I had to zoom right into the battlefield to actually see the detail of the monsters I was fighting. I am not sure if perhaps the PS4 was not powerful enough to power the engine or what the story is.

Apart from the visuals, you will need some patience to get through the dialogue and exploration too. After a couple of hours of being interested, the pacing just can’t hold out long enough to keep the game interesting. I loved the combat and strategy of the game systems but everything else was just okay.

If you are looking for a unique RPG mixed with tactical combat then this is it. You just need to be prepared to deal with everything that simply isn’t at great.