After what seems to be a promising vacation goes south, Luigi finds himself trapped in a haunted hotel in search for his friends that have been abducted and trapped in paintings. Luigi is tasked in exploring this haunted hotel floor by floor to obtain missing elevator buttons to advance to the next floor. While the flow of the game sounds simple, there’s magic to be found on every floor that managed to deliver an exciting new setting each time. Luigi’s Mansion 3 is the best entry in the series to date and while the story could often come across as one-note, the game is brought to life with its fantastic puzzles and large emphasis on exploration.

After receiving an invitation for an all-expenses-paid trip to stay at the luxurious Last Resort Hotel, Luigi, Mario, Princess Peach and a handful of Toads arrive at the hotel in hopes of a break from the world. Things don’t seem from the get-go as the staff who are wearing costumes and masks and float in the air already give you an idea that this is not your average hotel. It turns out that King Boo was freed from his imprisonment by the hotel owner Hellen Gravely. 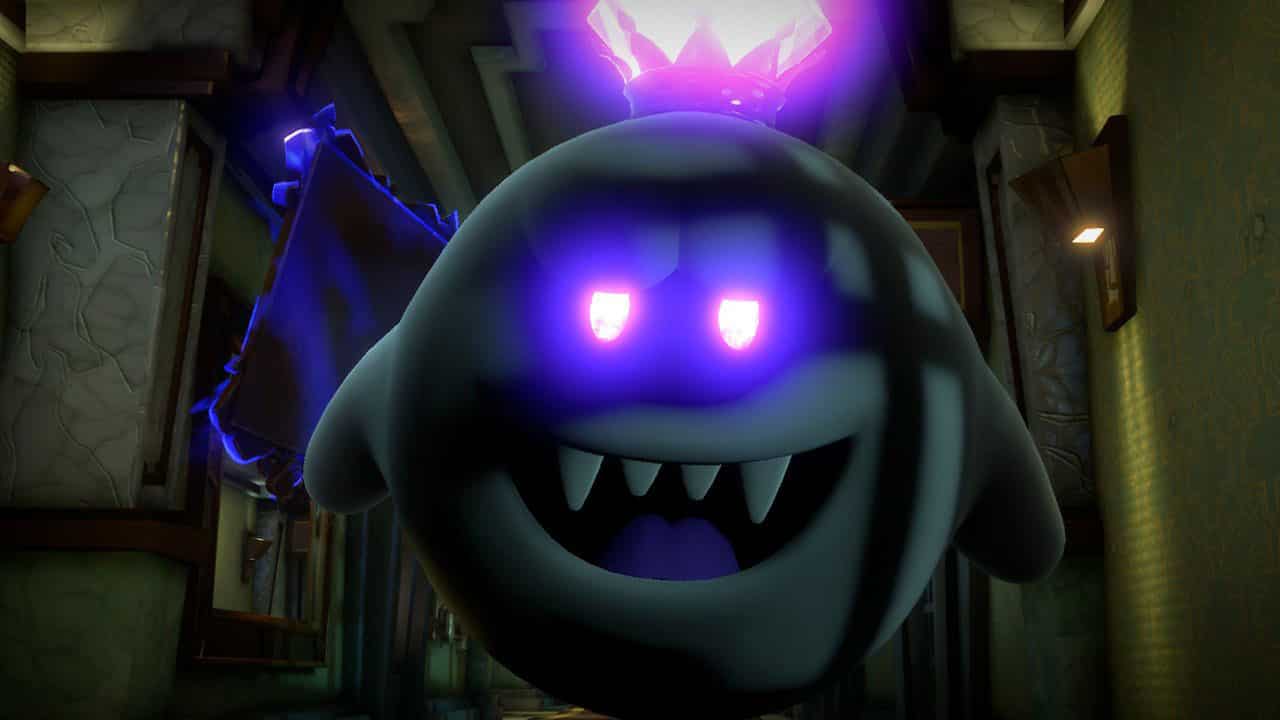 Luigi is the only one that manages to escape King Boo’s clutches after the hotel transforms from a lavish building into a haunted skyscraper and his friends are turned into paintings. After about an hour of introduction and saving Professor E. Gadd, Luigi gets set up with the Poltergust G-00 and the Virtual Boo, the two main gadgets he will use to try and capture the ghosts lose in the now-haunted hotel. Luigi also has a new companion by his side named Gooigi, a green blob of goo that he can use to help explore the floors and solve puzzles.

Luigi’s Mansion 3 has a rinse and repeat pace. You enter a hotel floor, solve some puzzles, fight a boss, get a new elevator button and move up to the next floor. Every now and then, you will encounter a plot point that will hinder your progression like someone stealing the button from you which results in running around the hotel to try and track it down. While this all may seem rather repetitive, it is far from it. Luigi’s Mansion 3 manages to keep the excitement going as every floor has a refreshing approach to it. 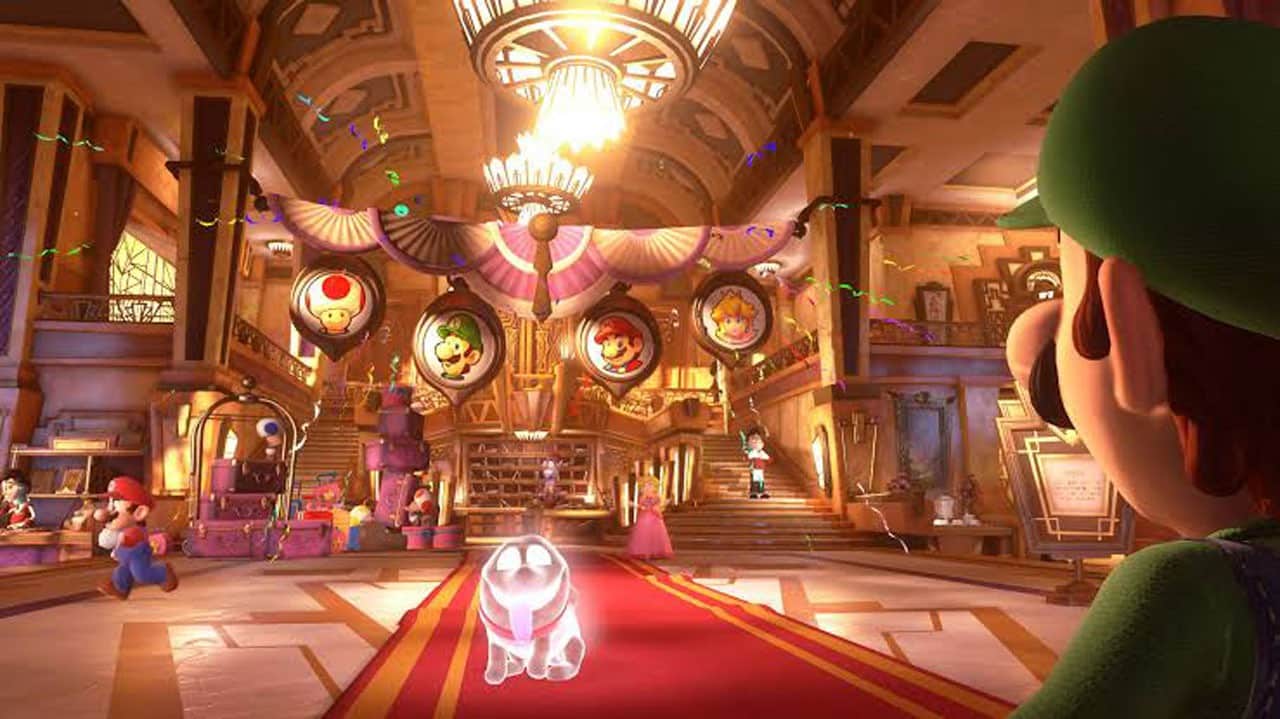 Sure, the gameplay pretty much remains intact throughout the game but every now and then you enter a hotel floor that mixes things up. Each floor delivers a new theme to the player and this goes beyond just a few new items of furniture. They feel like a new world on their own. A medieval castle that I had to explore, dodge arrow traps and knocking armour off ghosts before I could catch them. I then fought a king in a jousting match. One of my favourite rooms took me to four movie sets where I had to solve a puzzle in each and take the item to the next set in order to advance the puzzle. It was all worth it as I managed to get the torch to burn a giant cobweb and obtain the loudspeaker for the director ghost.

One floor even saw me traverse its deadly traps and solve puzzles on a blow-up ducky as Luigi used the Poltergust to push and pull him throughout the area. These hotel floors give the game the pacing you need for a handheld experience. Its pick-up-and-play approach suited the Switch perfectly. 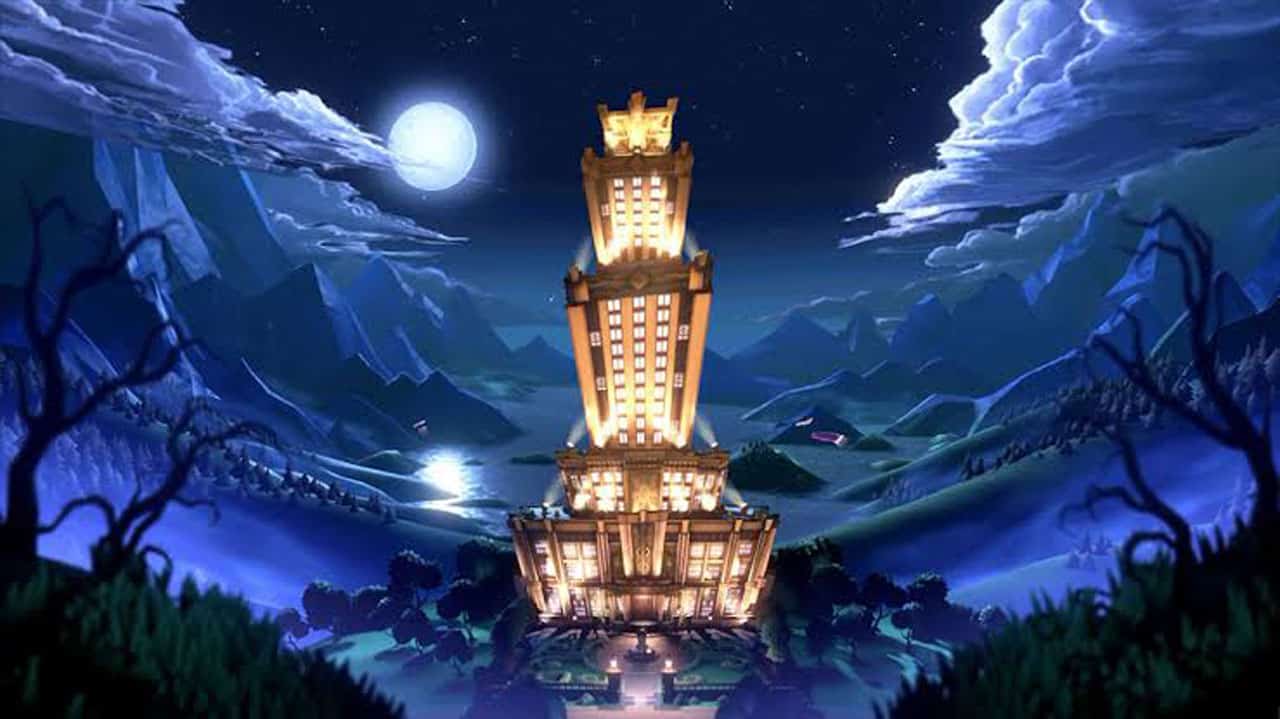 The game’s emphasis on exploration also meant I explored every room from top to bottom. Luigi can use the Poltergust to suck in items and push objects. Every room had money hidden in every little compartment which had to be found by using the gadgets Luigi had at his disposal. I shot a suction cup at jammed cupboard doors to yank them open with the Poltergust’s slam and sucked in a pile of leaves before finding a wad of cash underneath it. It may sound repetitive but the gadget is super-fun and easy to use and every new room delivered an opportunity to suck and blow every item in sight in search of money.

But money is not the only side objective the game throws at you. Hidden ghosts can be found by activating certain puzzles, Luigi can discover hidden objects by scanning them with a mystifier and gems can be found by completing challenging puzzles. Each floor has a set of gems to find putting further emphasis on exploration. These gems, while some of them are easy to find, some are not and require you to make use of all of Luigi’s gadgets in order to do so. Gooigi being one of them. This goo version of Luigi can fit through gates, slide through pipes and even fall through drains. As soon as I spotted one I always made sure to spawn him and the game gave me full control of his actions so I could solve the puzzle at hand. 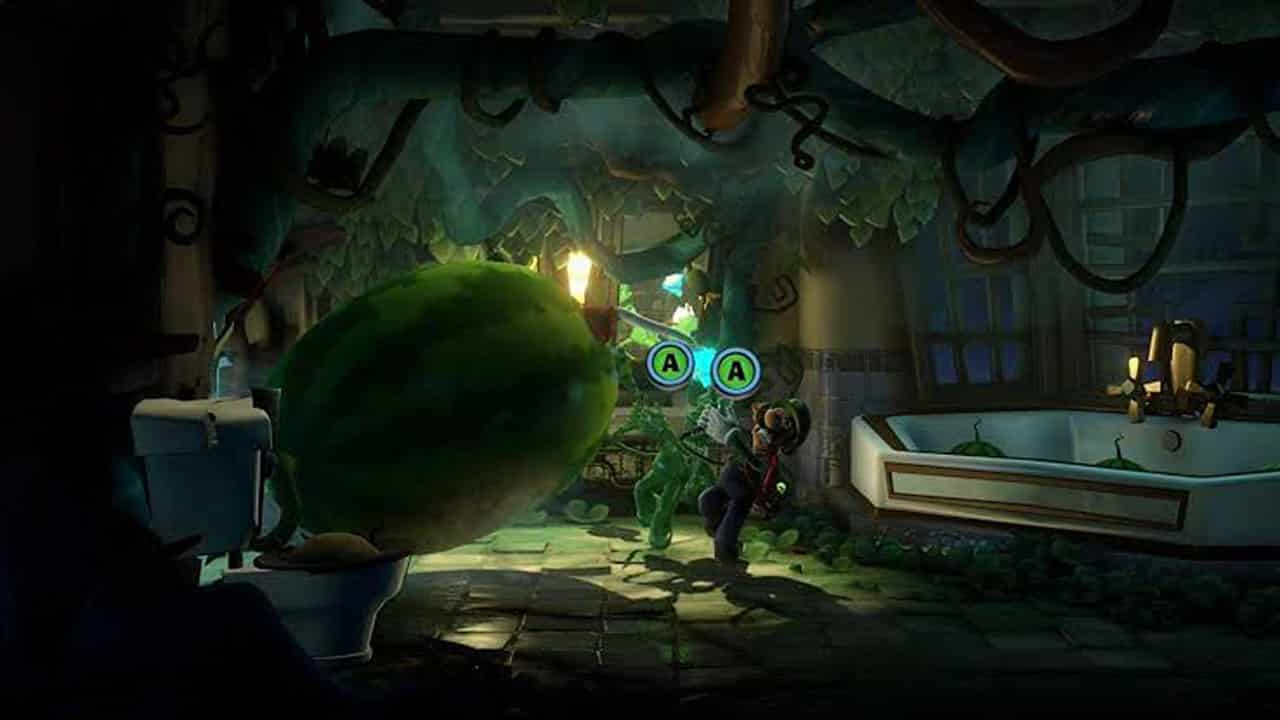 Making Gooigi slide through a grate in order to pull a switch to open a door was not just for puzzles but for the overall progression of the game too as this green bundle of goo is incorporated into boss fight mechanics and overall progression. He also has his own Poltergust which can also be used to solve puzzles. Often I had to blow out wind at something with both Luigi and Gooigi at the same time in order to get enough force to activate a switch. It is like co-op but alone.

Every hotel floor is a new opportunity to find gems, money, hidden ghosts and a Boo so you can spend at least an hour looking around for all of its hidden secrets. They have all been designed in the true Nintendo way again showcasing the company’s exceptional game design. Each floor was even more exciting as the last to explore, solve puzzles and fight the boss which also get more challenging as you progress through the game. 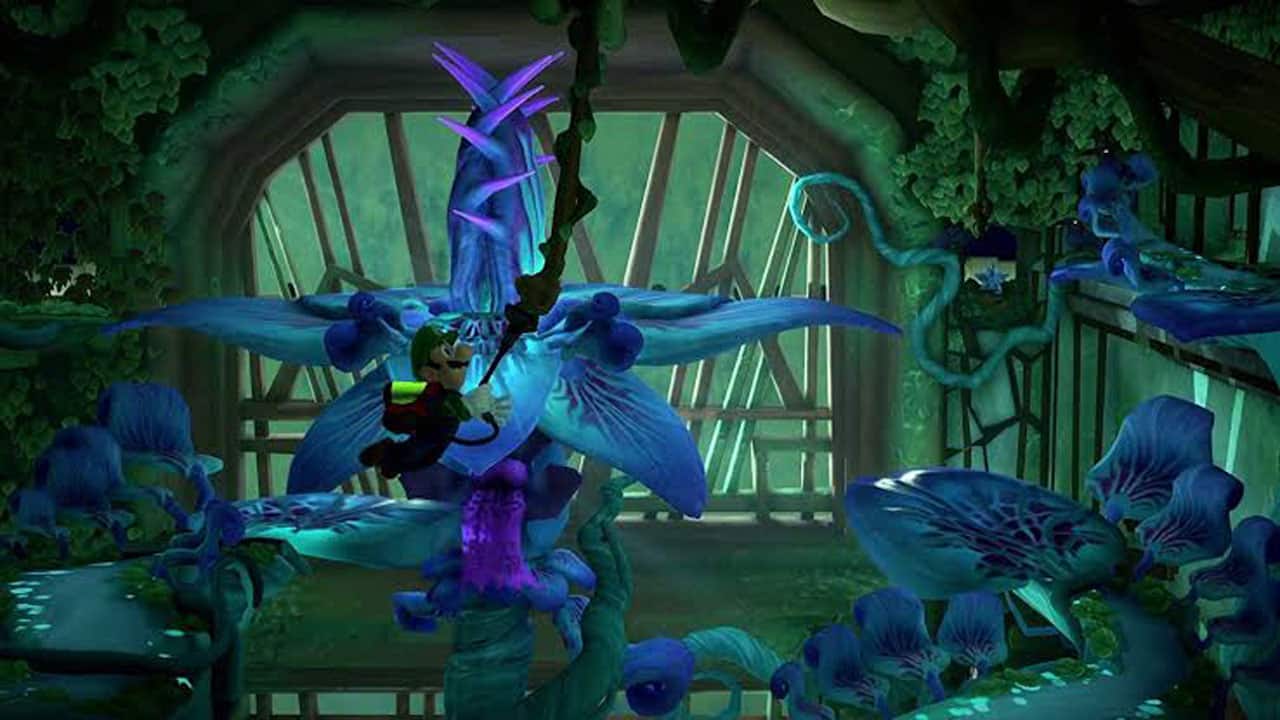 Luigi’s Mansion 3 has an exceptional campaign that is chock full of content to complete and things to find. It delivers each floor on a golden platter and you can just run through it to fight the boss but the magic is in the exploration as you try and discover all the hidden secrets each floor has on offer. The story, while being basic is good enough to carry the fantastic gameplay through to the end.

The game also contains some co-op modes like the ScareScraper experience. Each player needs their own Switch device and you explore a set of procedurally-generated floors completing various objectives. It is a co-op mode as you all need to track down ghosts and catch them or find a set amount of Toads before the timer runs out. The challenge increases as you progress too with harder ghosts to catch and bigger rooms to explore with their own puzzles too. 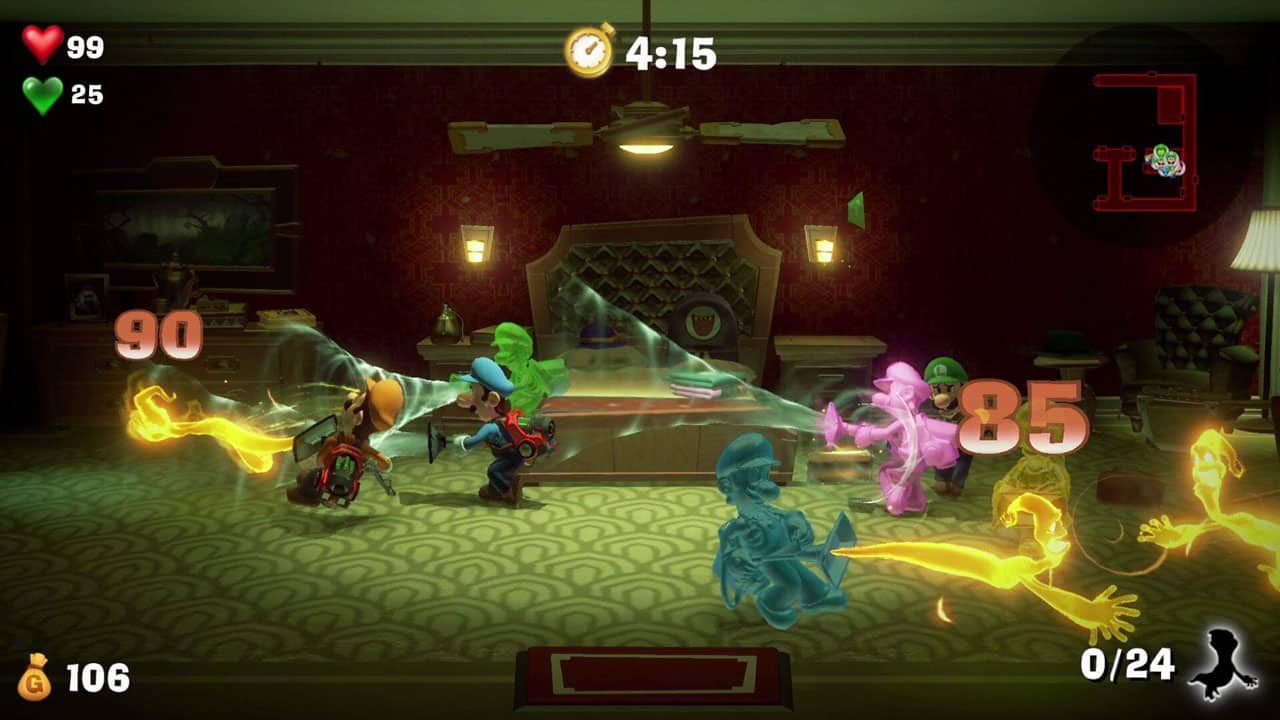 The combat is taken from the main game as you need to know what ghost you are facing and how to catch them. Some ghosts have glasses on that need to be sucked off before you can blind them with your flash and suck them in. Others need to be blinded and sucked in from their tail.

As for Scarepark, this mode sees players complete mini-games on one device. Each player takes a controller and has to complete the said min-game. One of them was to catch as many ghosts as possible before the timer runs out. This is a competitive mode with its own powerups too. Another mode saw me try and shoot bombs at targets before the other team. The catch was the bombs were held by ghosts so we had to catch them before they dropped them. This mode supports up to eight players which make for a crazy couch gaming party. 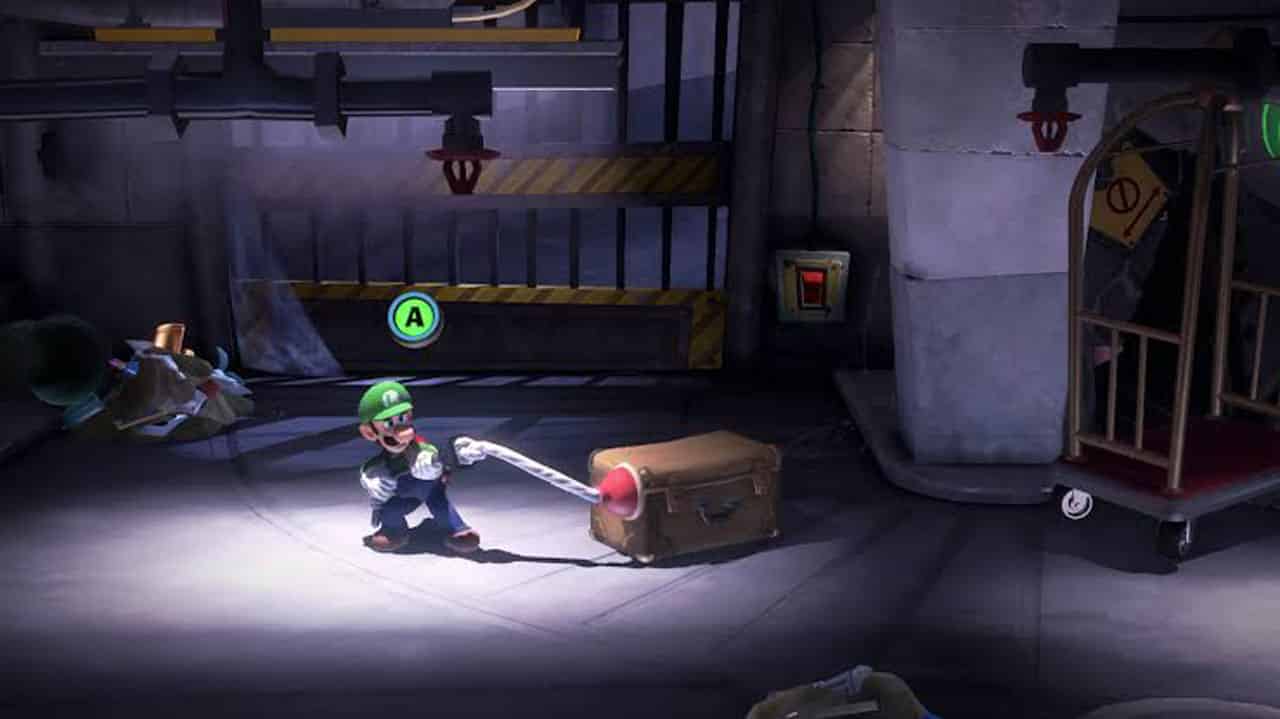 Luigi’s Mansion 3 is a fantastic adventure game and the co-op mode is just an added extra feature here. The story takes a good 15-hours to complete and every floor you enter is a joy to complete. It could be one of the best games on Switch this year.

This Luigi’s Mansion 3 review was based on a code sent to us by Nintendo.