I never thought that 0ne day I would be racing around my house using an actual Mario Kart toy. As children, we all dream of creating these fantasy tracks filled with twists and turns, bridges and ramps and Mario Kart Live: Home Circuit finally makes that a reality. We have made some big advances when it comes to AR making this gaming experience possible. Sure, it is not perfect and quite pricey in the long run but it’s definitely one of a kind.  However, Mario Kart Live: Home Circuit is still a video game and packs quite a lot of content under the hood for your investment. There’s still a series of 8 cups to compete in, a load of customization to unlock and earn and the endless creative mode where users can build their dream courses.

Given its target audience, Mario Kart Live: Home Circuit is easy to set up and get going. In the box, you will find the Mario or Luigi kart toy (depending on the version you buy), a set of cardboard gates and two barriers. There’s also an included USB Type-C cable to charge the toy and this is done on the Switch dock. You can charge it anywhere really.

There’s no actual game in the box. Instead, one has to download the Mario Kart Live app from the eShop for free. This is where the core experience begins. There’s a tutorial that outlines how to connect the kart to the handheld console as well as set up your first race to get going.

It all takes literally two-minutes to connect and go which was surprising given Nintendo’s previous LABO experience which took hours of folding before you could actually start enjoying the product. Holding down the only button on the Mario Kart pairs the toy to the Switch and the gates take a few seconds to unfold and set up. 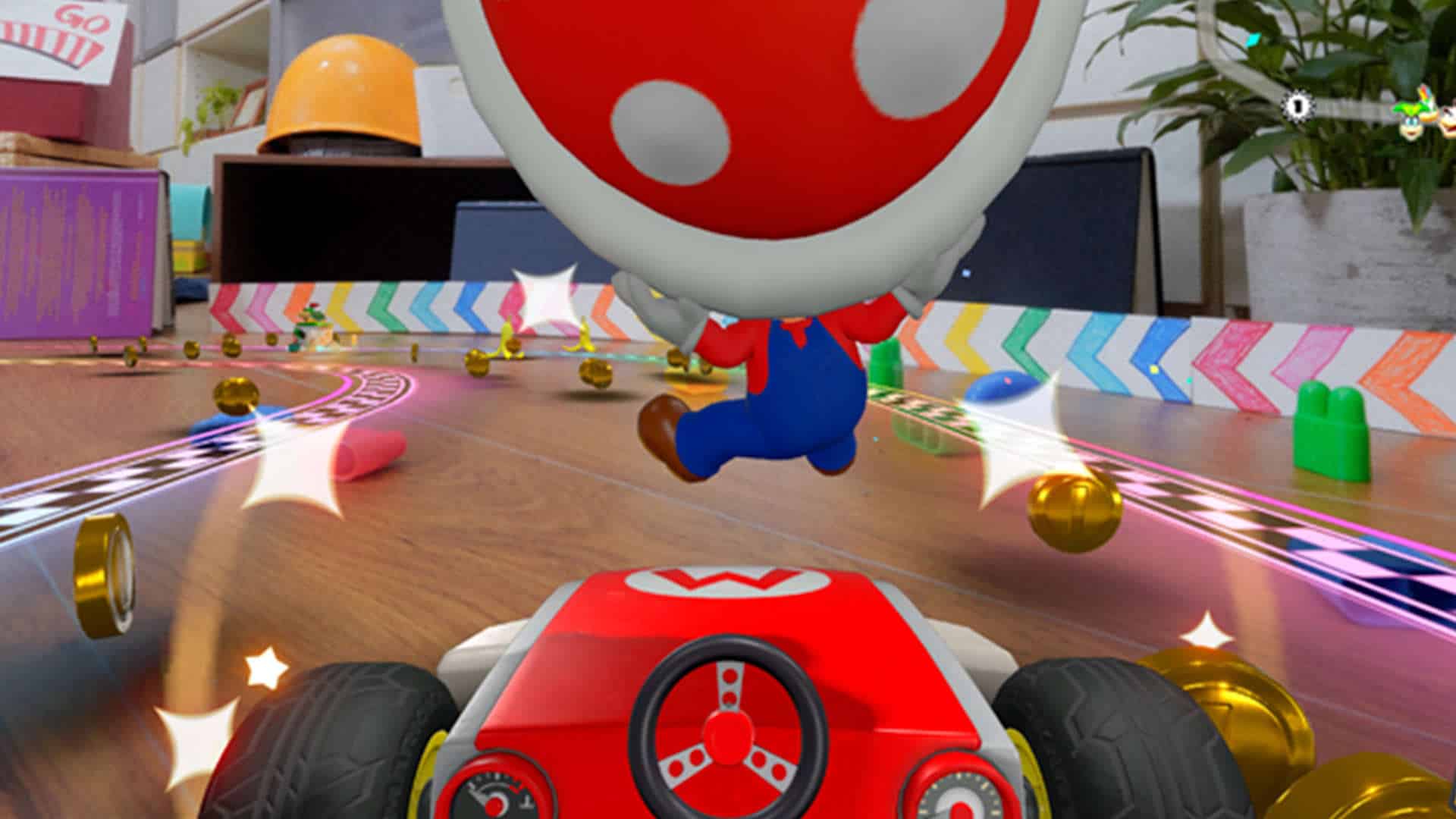 I need to touch on the presentation of the product first. Given you are spending R1,999 on this bundle, I was pleasantly surprised to see just how great the build quality was. The kart is highly detailed and made of sturdy plastic. Mario is made up of multiple high-quality plastic parts and looks just as cartoonish as he does in the game. If you are not racing him your house, he would make for a great figurine to display in your cabinet too. A collectable if you may.

The cardboard gates are what you would expect from them. They unfold slowly and I had to tuck the legs in while folding another part to support its pillar. The build quality is great here too but I am a little concerned about the folding and unfolding aspect of it all. After a few months of doing the same thing, this equipment might become frail and lose its sturdiness. Regardless, they are simple to use making it accessible to kids too. Once I had the gates unfolded and the kart paired to the app, it was time to race. Mario Kart Live: Home Circuit eased me into the whole process quite easily. Creating a course relies on the gates. At first, I was worried about making these too large but I soon realized there’s really no limit to how adventurous these courses can be. The only thing you need to take into consideration was the connection of the Switch to the kart. If Mario gets too far, the video quality drops and the responsiveness of the controls lose quality too. Given the game is all about AR, it is vital to keep the quality high as I raced through the room collecting items and boosting through gates.

Setting up a course is simple. I placed down the gates around the house, put Mario down in front of Gate 1 and controlled him as I “painted” the course by racing through each gate. There are no restrictions here. If I decided to twirl around a table three times between Gate 2 and 3, the game would map this path for me and it would be the track I would need to master in a race. As long as I started and ended at gate 1 while going through 2,3 and 4, that is all that mattered. The in-between is where I had the freedom to move books around to make tunnels and place down sticks to create barriers. The AR does the rest. Once mapped out, I could then customize the gates. There’s not a lot to change here at first. One gate can spawn items to use against other racers and another can provide a boost which literally boosts the kart when I drove under it. This was pretty cool. The rest is born through the AR after choosing a theme of the race. These relate to some classic Mario Kart themes from past video game entries and sort of “skin” the track to give it some life. This helps to turn your boring living room into an actual race track.

The real magic of it all arrived as I progress through the Grand Prix mode. Gates received new customization items such as spinning fireballs from Bowser’s Castle, and track themes went from boring to crazy with a flip of a switch. The desert theme blew wind at me that tossed the kart across the track, while the haunted house had Boos that flew into me and obscured my vision. These themes and customization options may have taken a few hours to unlock by collecting coins on tracks I made. However, they were totally worth the grind. Not to mention the Mario outfits and kart skins add small milestones to reach too which enables new appearance options for the kart and character. 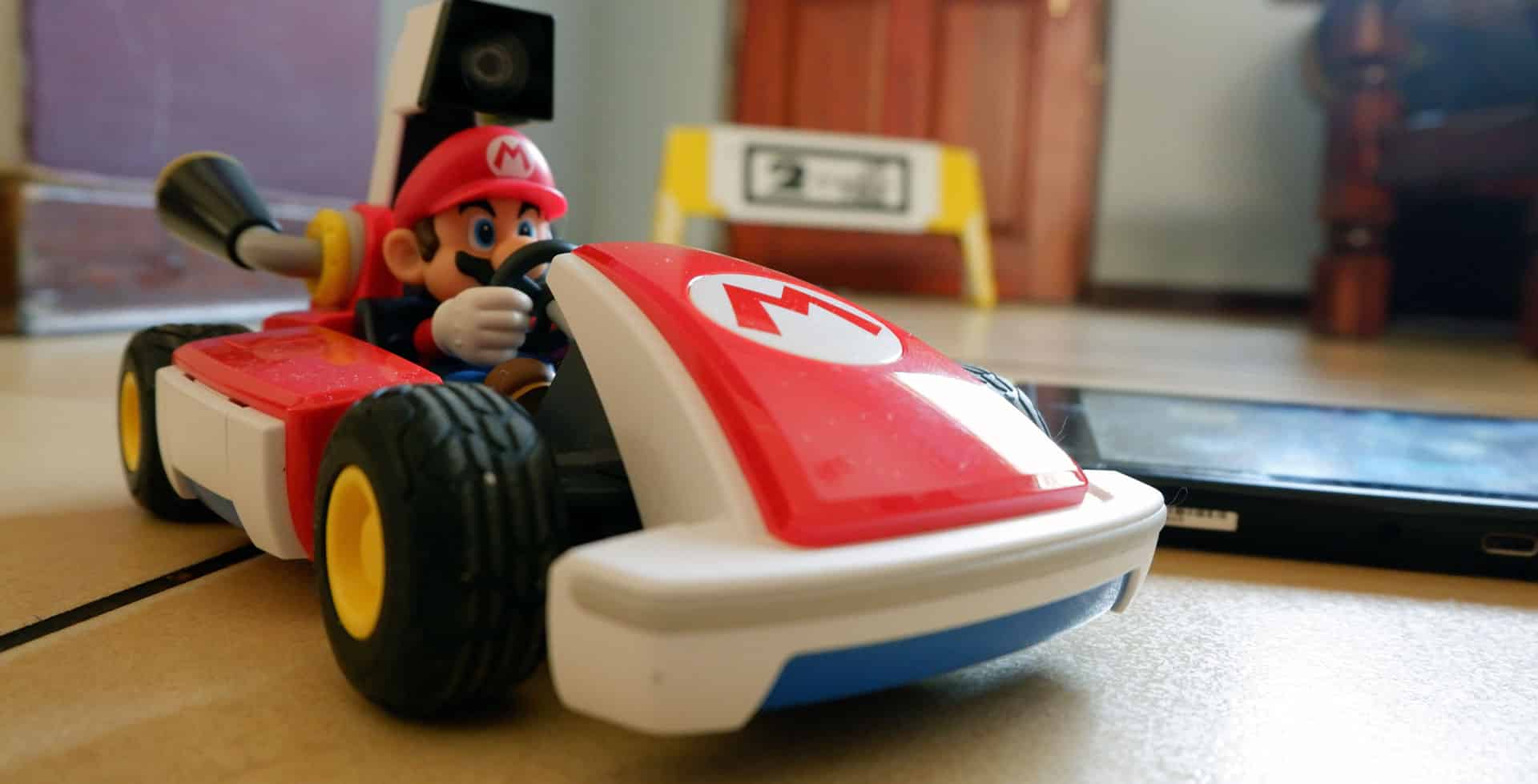 The more Mario Kart Live: Home Circuit grows, the better it gets. I started off simple with a round track but soon after, I was adding carpets down mid-way which slowed things down, books to create light ramps and tieing string across table legs to create more barriers. Kids will no doubt have the best time here as they develop new ways to race and experiment with how the AR adapts to it all. It also helps that the entire experience is so easy to get used to and helpful if you screw up.

Mario Kart Live: Home Circuit is also not without its issues. It takes a while to adapt to the idea of racing an actual kart around your house so if you crash, you need to reverse and get back on the track. There’s no floating cloud to pick you up and put you down. However, that is not the issue. The game can get chaotic at times which causes the crashes. Later on, I felt as if everything was out to get me and every opponent wanted me off the track. It can get a little cluttered and clumsy which can get in the way of enjoying the race. 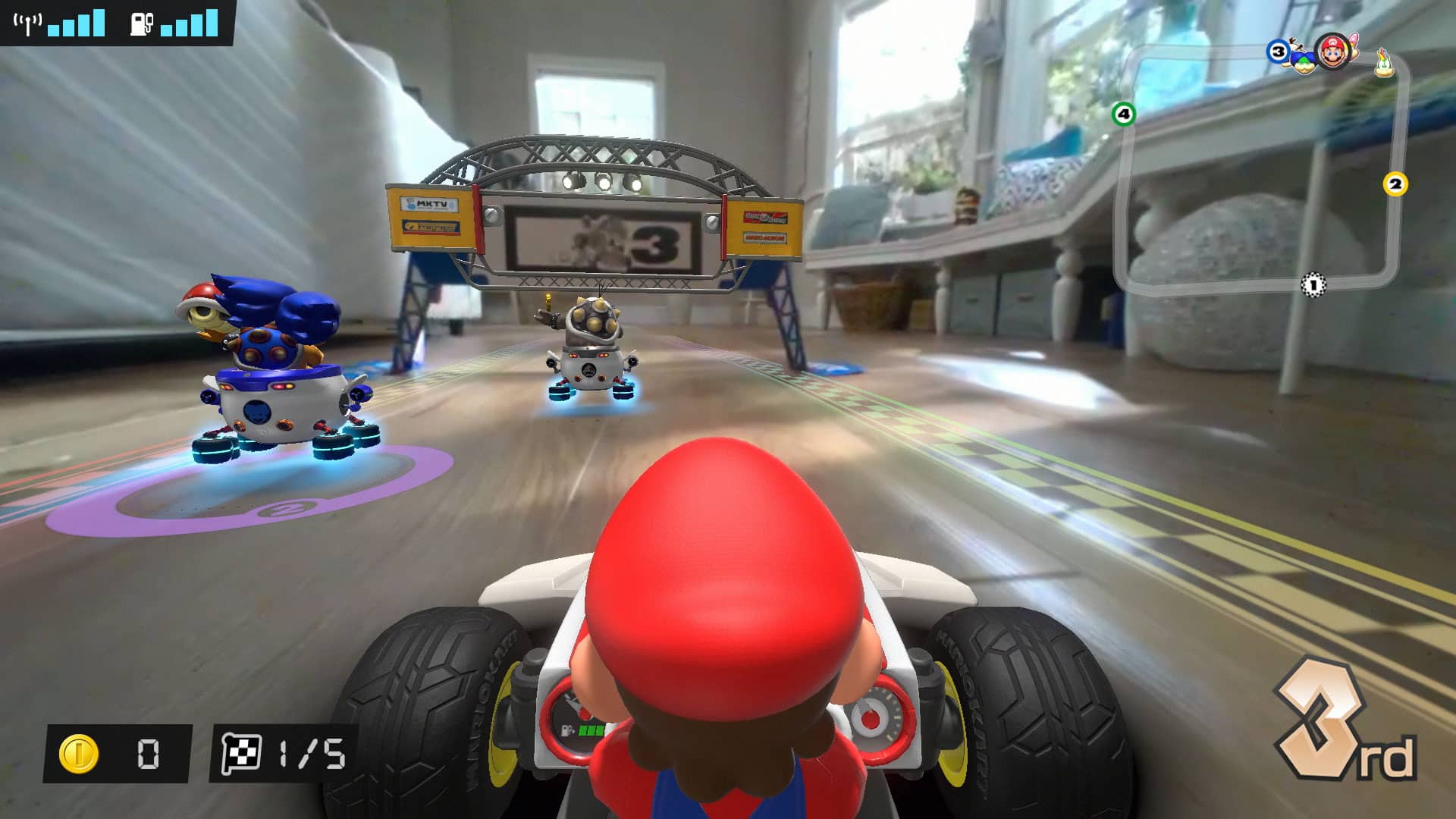 We then have the limitations. Mario Kart Live: Home Circuit is a single-player game unless you own another R1,999 kart and Nintendo Switch or Switch Lite. Only then can you actually race with a friend. There’s no way for you to download the app and jump into a friend’s track as a virtual opponent. This would have been at least some sort of way to enjoy this with friends. Even if they are not actually racing a physical kart. Sure, you can take turn racing a time trial course but it is not the same. For a series that prides itself on multiplayer, this is lacking. Not to mention, you can’t even split-screen the game if you own two karts. Each kart needs its own Switch.

There are also some nasty hiccups that get in the way of enjoying tough courses during the Gran Prix mode. When I set up some tracks with narrow paths to drive through and between chair legs, the AI automatically fly through them due to the track being large. However, I had to sit and swerve in and out of them to avoid hitting a leg. There’s also the connection problem which is extremely limited. I found the game stuttering quite often with input-lag causing crashes too. Even when I was sitting on the couch while the kart went under the arm next to me, the signal dropped. Multiplayer issues aside, Mario Kart Live: Home Circuit is a lot of fun. It’s a massive step in a new exciting direction for the series. It will never replace the actual video game but it turns gaming into a physical experience and the results are magical. I became obsessed with crafting crazy tracks, tweaking them and then mastering them. Not to mention the constant grind to unlock more skins and themes forced me to keep going. Damn, I wish this was around when I was a child.

This Mario Kart Live: Home Circuit review was based on a unit sent to us by Nintendo. The unit has since been returned.