It is hard to look at Square Enix and trust them when it comes to superhero games. After the abysmal trainwreck that has been Marvel’s Avengers, fans of the massive comic book universe have all the right to think twice before jumping into a new Marvel game from the publisher. Thankfully, Marvel’s Guardians of The Galaxy is everything Marvel’s Avengers isn’t. Instead of a pay-to-win, horribly-designed live-service game, you’re getting a single-player only action game with an incredible story and Marvel lore oozing out of every scene. While the overall experience might drag on for a bit longer than needed, this is a superb Marvel outing that you should not miss this year.

Being Marvel’s Guardians of The Galaxy game, there are a few things you would expect from this journey. You need massive set-pieces, dark humour, a great roster of characters and of course,  the iconic 80’s soundtrack. Marvel’s Guardians of The Galaxy checks all these boxes. It is also fitting to note that if you find the cast from the MCU annoying, like me,  this band of misfits are all voiced and designed in a completely different way. 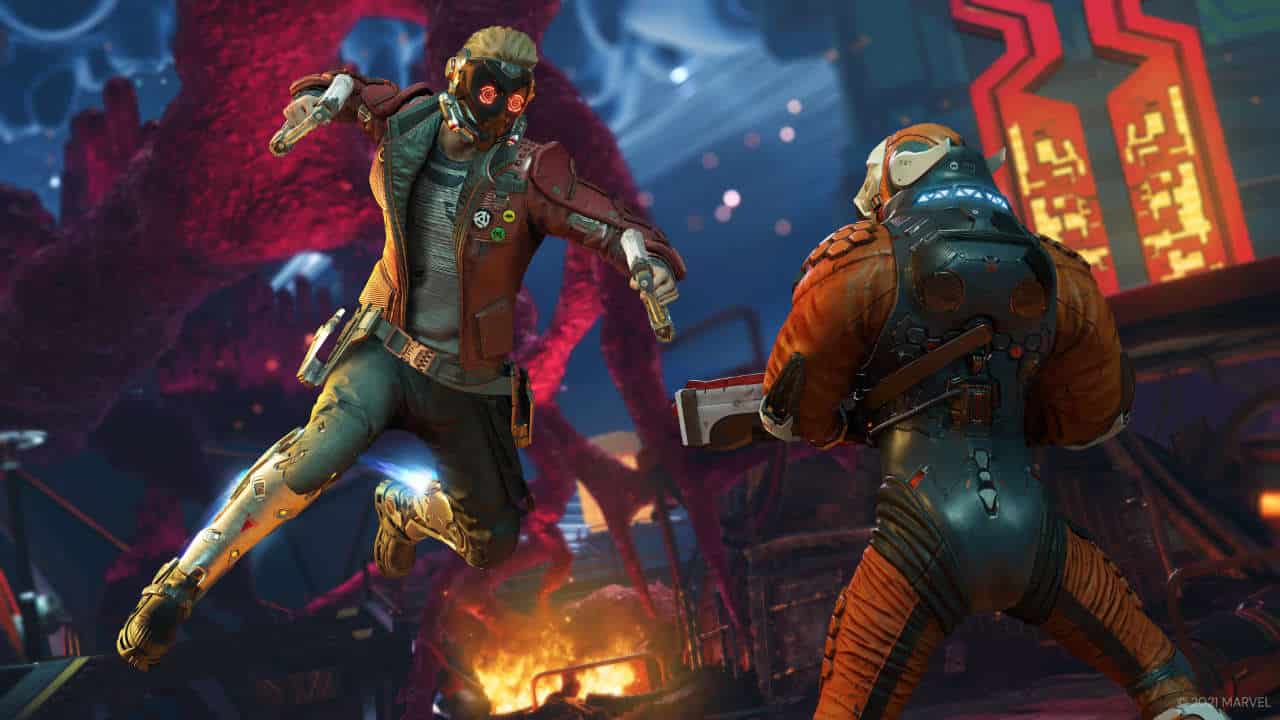 Marvel’s Guardians of The Galaxy starts off strong. For some reason, the group are found heading into a restricted zone in the galaxy to find a creature which they plan on selling to Lady Hellbender. After finding a strange alien llama, things go south, they get caught, get arrested and are forced to pay a fine worth more credits than they own. Basically, everything that can go wrong in a typical chapter of Marvel’s Guardians of The Galaxy happens within the first few hours of the game. However, the real joy in this experience is in how the rollercoaster of chaos never ends.

The Guardians get caught up in quite an adventure that touches on the cast’s pasts, dark secrets and some rather emotional and relatable backstories on loss and struggle. I am not the biggest Guardians of the Galaxy fan. I don’t know where Rocket came from, what happened to Drax in his past or where Peter Quill falls into the Marvel comics. Marvel’s Guardians of The Galaxy did a great job filling me in on all this. More so than any of the movies have done up to this point. 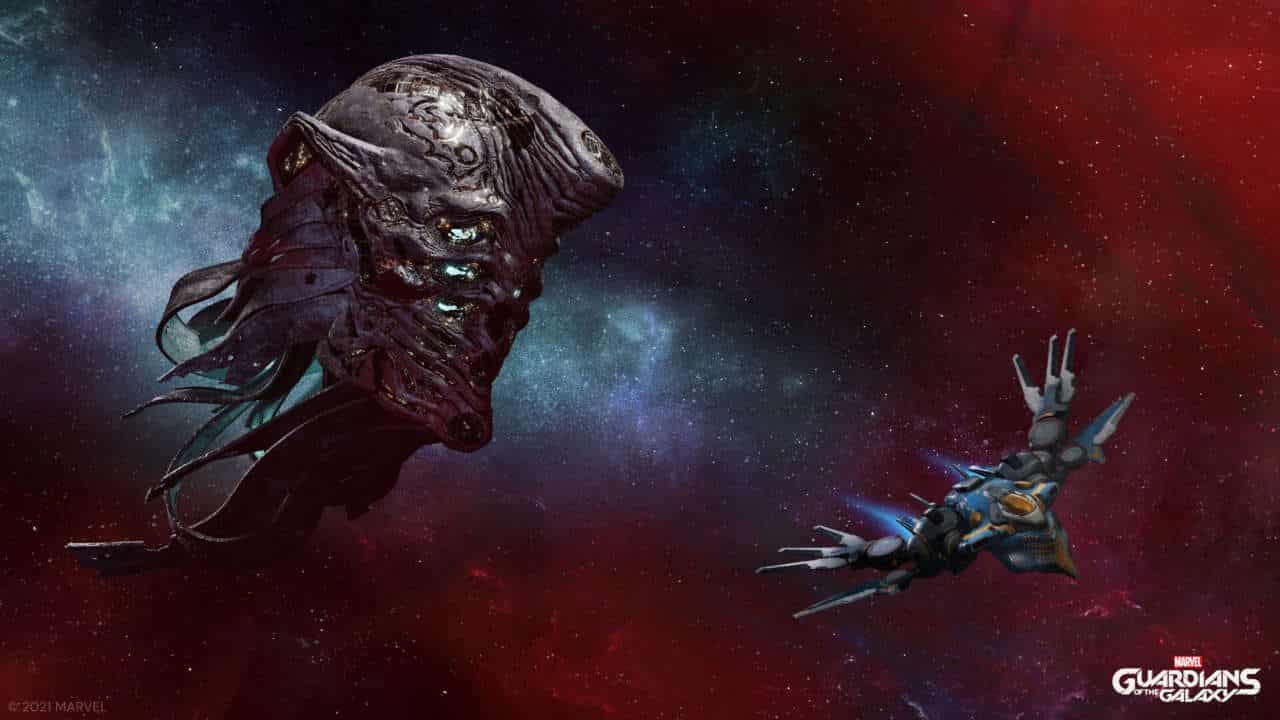 If anything, this game is a fantastic introduction to the cast and a great way to meet them and discover how they all became who they are. This is especially clear for Star-Lord who gets much of the attention through some incredible interactive flashbacks to his past and his mom. It also helps that all of these story moments are beautifully directed, well-voiced and backed by some catchy 80’s tunes.

But Star-Lord isn’t just a main focal point in the story, he is also the only controllable character in the game. Marvel’s Guardians of The Galaxy is told through Quill’s eyes and everything I did throughout the game was done by controlling him in and out of combat. While exploring the many gorgeous locations, Quill can use his jet boots to get to higher places, crawl through small gaps and loot various items around the world. He can also command the rest of the crew to do specific things to help get around. Gamora can attach herself to a wall which can then be used as a leaping point. Drax can toss things, including Rocket, and lift giant blocks for stepping stones. Groot can then raise platforms and make bridges with his roots. While these exploration puzzles were never extremely tough, they offered some nice variety outside of the usual walking around. Quill can also use his visor to scan everything around him to get some back story on the items and buildings on each planet. I won’t say Marvel’s Guardians of The Galaxy breaks any new ground here but if you have played any adventure game in the past ten years, you’ll feel right at home here. Think Uncharted meets Marvel.

For the most part, Marvel’s Guardians of The Galaxy is a linear game. The story plays out in chapters and each location packs some secrets to find and resources to loot. There are some costumes to obtain throughout the game and specific character treasures unlock new dialogue back in the ship. These dialogue moments often help expand on the cast’s history and past. It is a great way to discover things you probably didn’t know about them. 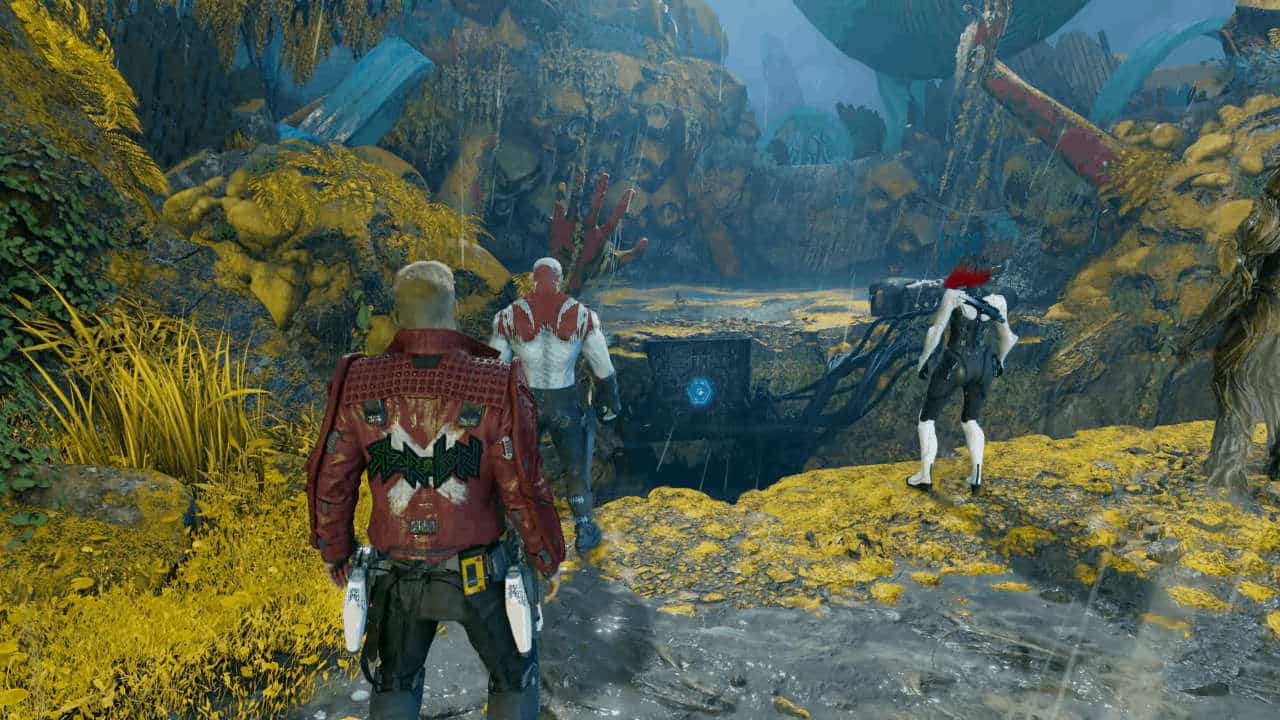 Marvel’s Guardians of The Galaxy also offers a range of dialogue choices that tweak the game’s outcome in specific ways. While these changes don’t drastically alter the story, they do provide a few tweaks and offer opportunities for exploration. For example, during one scene I had to keep a character occupied long enough for Rocket to hack into a cube. I won’t mention who the cube belonged to, to avoid spoilers. If I succeeded in this dialogue, it would help me navigate through a ship in a later chapter. I failed and I had to spend a few extra minutes mindlessly exploring the ship’s corridors in hopes I found the correct path.

These dialogue choices are tough to make and also affect the relationship of the crew. But in the end, things mainly stayed the same. I won’t say you need to replay Marvel’s Guardians of The Galaxy twice to see it all but making a different decision the second time might be fun to see. 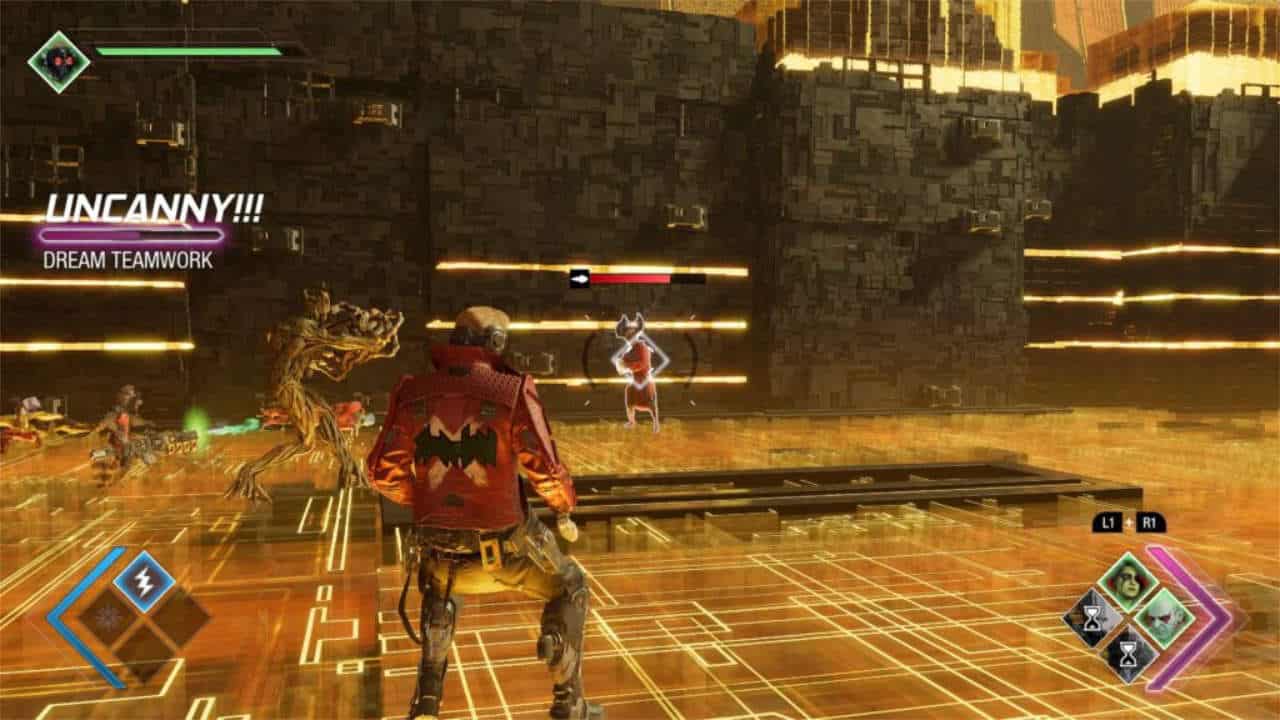 Controlling only Peter Quill, I ran around each combat encounter aiming and shooting enemies. That was about it. Sure, I unlocked new elemental guns that helped stun enemies, freeze them and pull them closer to me but the general combat remains uninspired. The only real excitement comes from issuing commands to the rest of the crew. Each of the crew packs a range of abilities ad attacks. Groot can tie enemies up with roots, Drax can slam on them, Rocket throws a grenade and Gemora uses a deadly slice of her sword. While this sounds fun on paper, it is far from the case. A general combat encounter was just about me pressing the L1 button, spamming crew attacks and holding R2 and L2 to shoot enemies with Quill’s weak blasters. Quill does unlock new elements that have specific effects and each crew member gets new abilities but they kinda feel the same. There’s no real reason to use a specific crew ability at a certain time because spamming them all at once does the same thing. Even the combo meter maxes out within seconds and provides no incentive for preventing damage.

It also doesn’t help that the combat feels clumsy most of the time. Characters elastic band into enemies when commanded, the camera is always in the wrong place and again, spamming a bunch of buttons isn’t really much fun after ten hours. Marvel’s Guardians of The Galaxy also includes this Rally feature where Quill gives a pep talk to the crew. This then plays a song and maxes out the ability bar. I often could not tell the difference between this Rally Cry and general combat other than Bonnie Tyler’s Holding Out for a Hero playing in the background. 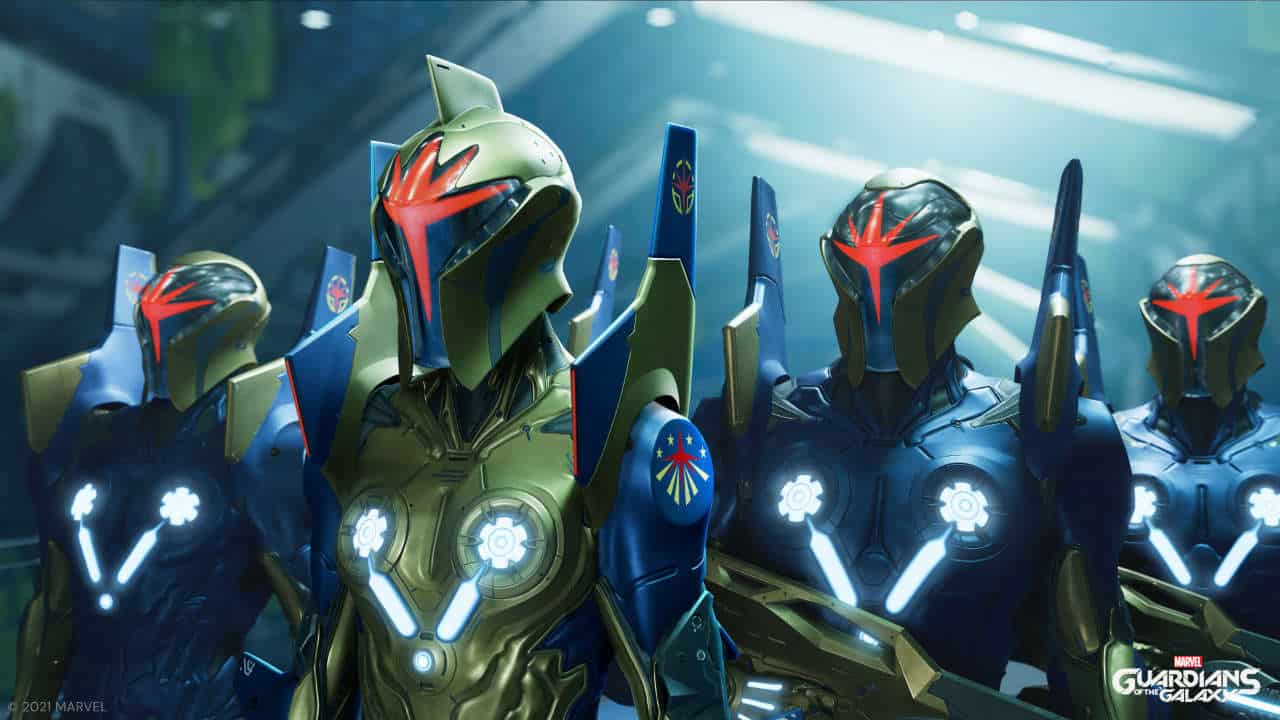 I won’t try and sell you on the combat because it is a hard pill to swallow. If anything, the combat was a chore to get through and dragged the game on and on way longer than I wanted to sit and play it. You might enjoy its random clumsy design but I was over it very quickly. It also doesn’t help that the abilities can all be unlocked quite early into the game so I was stuck without anything new to try for a good dozen hours.

Combat aside, Marvel’s Guardians of The Galaxy does a great job bringing the game’s story to life through its excellent dialogue and writing. There’s always someone saying something interesting. Be it on the topic of the planet I was on or something else. I would often spend a good few minutes on the ship just listening to the banter between Rocket and Gemora. Even Groot’s “I am Groot” talk never got old no matter how many hundred times I heard it. I felt like part of the team and that alone was a challenge. 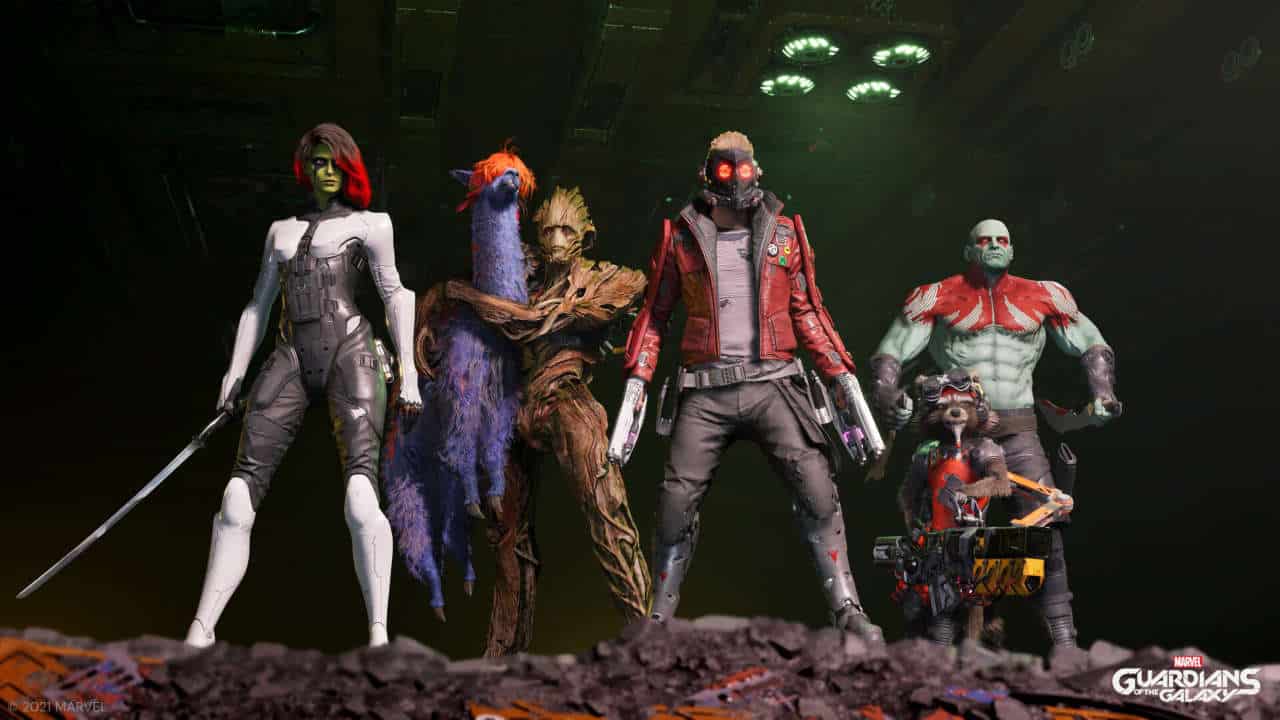 A big selling point should also be how wonderfully the world has been brought to life. Every planet was beautifully detailed, every character well-written and the general story is amazing too. This is a night and day difference to Marvel’s Avengers. If anything, this game gave me Star Wars Jedi: Fallen Order vibes – a single-player gem you don’t want to miss.

Marvel’s Guardians of The Galaxy Review

Marvel’s Guardians of The Galaxy is a superhero game that does mostly everything right. The combat isn’t anything great but the game excels on so many levels where others have failed. Sure, it is not the answer to the Arkham game but given its excellent cast and story, this is a Marvel hit you don’t want to miss.