I always get excited when I get to unbox my PS VR headset to review a new game. I love VR and Sony has done a killer job so far cementing its validity in the industry. The PS VR, in general, has some fantastic games on the platform. Ones which I highly recommend such as Astro Bot: Rescue Mission, Blood and Truth, RE7 and more. Every time I need to untangle my wires, clean those lenses and pull back that head strap to fit over my head, I hope for an unforgettable experience. Thankfully, Iron Man VR successfully fits into the collection of outstanding VR experiences on PS4. While it is a bit rough around the edges at times, from the moment I thrusted myself into the air for the very first time, I knew it was going to be an unforgettable game.

Developer Camouflaj went leaps and bounds beyond anything I thought possible with the latest in the Marvel video game collection. They took a headset and turned it into an Iron Man helmet. They took the PlayStation Move controllers and turn them into Iron Man’s gauntlets. Most important of all is how they successfully delivered the feeling of being Iron Man. As if this fictional character is real and they lived a day in his iron boots, stopped crashing planes from falling out the sky and shot guided missiles at rogue drones. I became Iron Man and even though I looked like a complete idiot while thrusting my way around the Helicarrier, I felt so damn good.

Marvel’s Iron Man VR tells it own original story. It is not a Tony Stark origin story. However, it does a great job tying into the Marvel universe and how Tony Start quits arms dealing after almost dying in a remote cave in Afghanistan. Anyone who knows Iron Man’s birth will feel right at home throughout the VR game. Ghost and Living Laser want revenge for the crimes that Tony Stark committed while he provided weapons for wars that took place around the globe and both villains launch a plan to take him down. At the same time, Ghost has taken control of Stark drone machinery and with the help of some rogue tech, turned them against Tony and Stark Industries. For the most part, the story works well and manages to tell an explosive and emotional tale. Well-known Marvel characters make their appearances like FRIDAY, Pepper and even Nick Fury. However, the star of the show here is Tony Stark and how he faces his demons in this emotional and mental tug of war. While Tony has left his past in the past, the so-called “crimes” he committed come back and haunt in. It is interesting to see these themes play out in the game and how his mistakes from his past contributes to the man he is today.

Marvel’s Iron Man VR spans over a dozen chapters. It starts out in Malibu as Tony is testing his “new” suit. This acts as the game’s tutorial phase and eased me into the controls and movement. Now, do not be fooled here, Marvel’s Iron Man VR is a tough game to master. The moment to moment gameplay is superb but getting to the point where you can juggle it all at once was a challenge. Controlling the MKII suit and all its gadgets was the toughest part. Flying is fun but is also often held back by its clumsy boost system. Each PlayStation Move controller acts as a hand. Pressing the trigger down will initiate a thruster boost. Pressing both will boost with both hands. Moving your hands in a downward position will then accelerate Tony faster than boosting up and down. 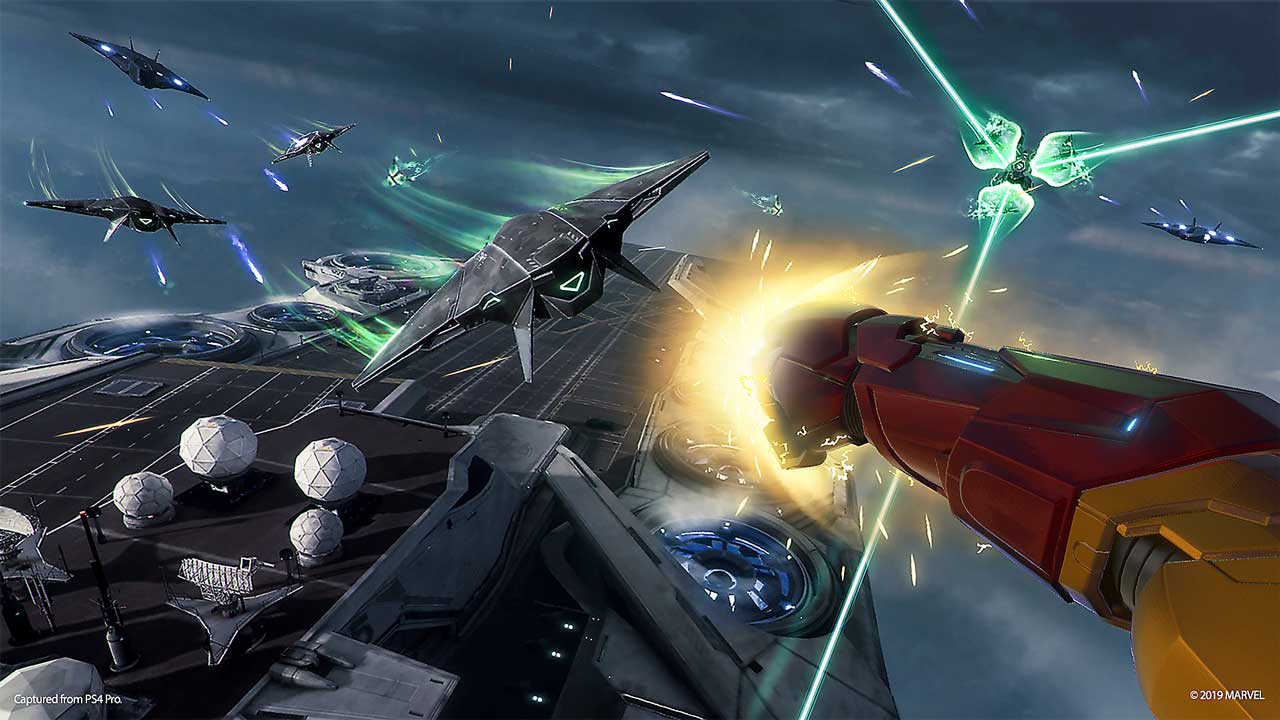 It works most of the time. Racing through mountains and moving across the Malibu sky felt great and I never stopped moving my hands. It all comes together when you need to speed through time trials as double-tapping the trigger button gives you a quick boost into the position you are holding the controller in. Some enemies like this annoying shielded drone that shoots powerful lasers at you, requires that you master the boost in order to quickly dodge incoming fire.

General movement is also fluid and responsive making it all feel absolutely rewarding when you get it right. However, there are times that it just did not work in my favour. While moving up and side-to-side is easy, often moving down was a problem. Thrusting downwards to fly through a ring or under a cliff was often impossible resulting in having to stop flying and wait to naturally lower my elevation in order to fly at a lower altitude. I either had to put my hands in the air upside down or try to position my arms as if I wanted to fly down. It is not user-friendly at all. Thankfully, these moments are far and few between, so they don’t ruin the already-great flying. Combine the flying with an intense and explosive combat system and you have yourself a stellar VR game. Marvel’s Iron Man VR really delivers here as the two mechanics go hand-in-hand to make the experience worth it. Iron Man is kitted out with repulsor weapons, missiles, his Unibeam and a powerful punch. As combat intensifies in later chapters, you need to combine everything you know in order to stay alive. Combat is even more immersive thanks to the layered movement system required to perform specific actions. Holding my hand upwards and I could fire a repulsor shot. Pointing them forward but downwards activated my currently equipped missile, smart bomb or scattershot. Holding down square targeted an enemy which I then had to swing my arm in order to punch it.

Not to mention that while I was juggling all these combat moves, I had to keep myself in the air by always thrusting and boosting, watch out for enemies on the ground, pay attention to my reload bar, health and what enemy needs to be countered with what weapon. It is a lot to take in but even during the sweatiest fights, I had one hell of a good time. No, really. Marvel’s Iron Man VR delivers action I had never experienced before in any game… ever. These moments are where the game shines the most and the wonky chase flying was forgiven. 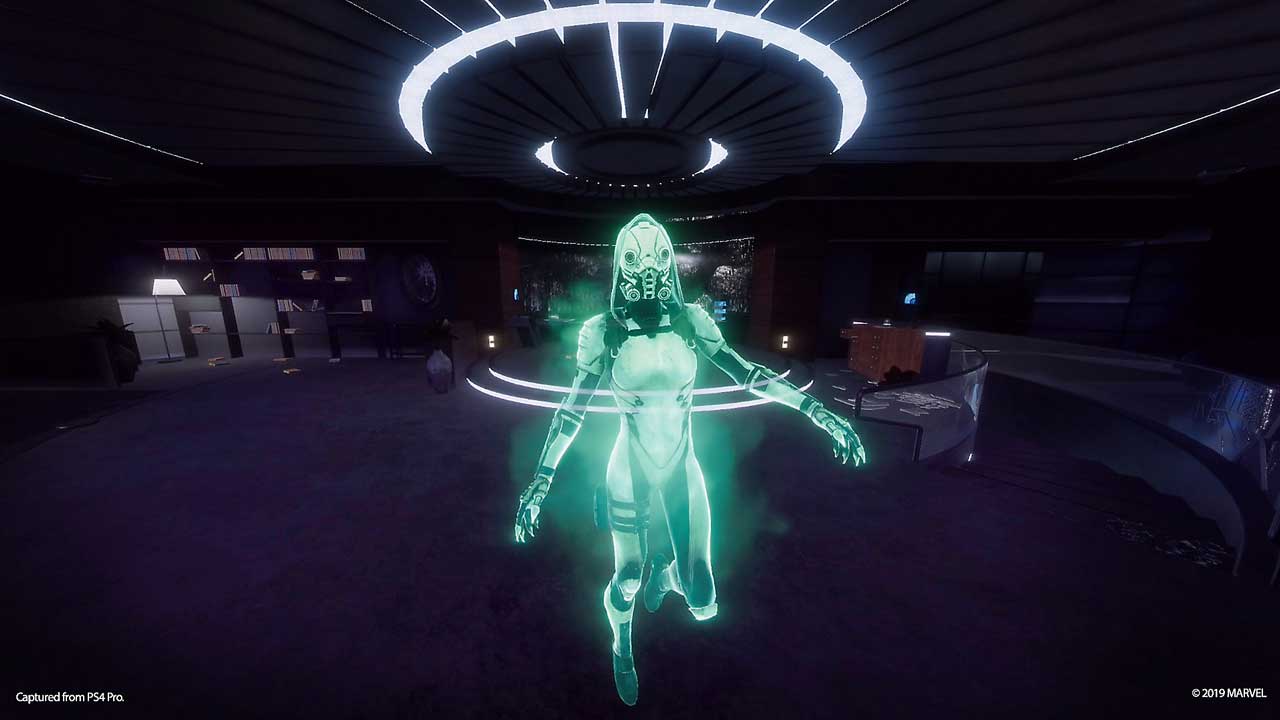 Mission variety also keeps things fresh and even though you return to the same location a few times throughout the game, the gameplay is so great that I could not be bothered. Things like picking up a dropped shield charge in order to charge my Unibeam so I could blast open a giant void ball in the sky make the usual routine mission fun. Some missions even make you feel more Iron Man-ish by tasking you to perform certain actions. Tracking down a power source to screw it open and punching a glass casing to get to wires. My favourite had to be grabbing a giant steel door with one hand and using the thruster to boost to push it open. I felt awesome while doing all this and if “being Iron Man” was a job, I know what I could expect now before applying.

Marvel’s Iron Man VR also offers a lot of replayability. Time trials are unlocked for different levels upon completion and saw me racing through the sky to beat a timer. Combat challenges see you returning to past stages to defeat waves of enemies in a certain time. Not to mention that every mission has a ranking you need to achieve in order to unlock upgrade points. The better you do, the more you unlock out of five. You can return to missions to replay them on harder difficulties too. 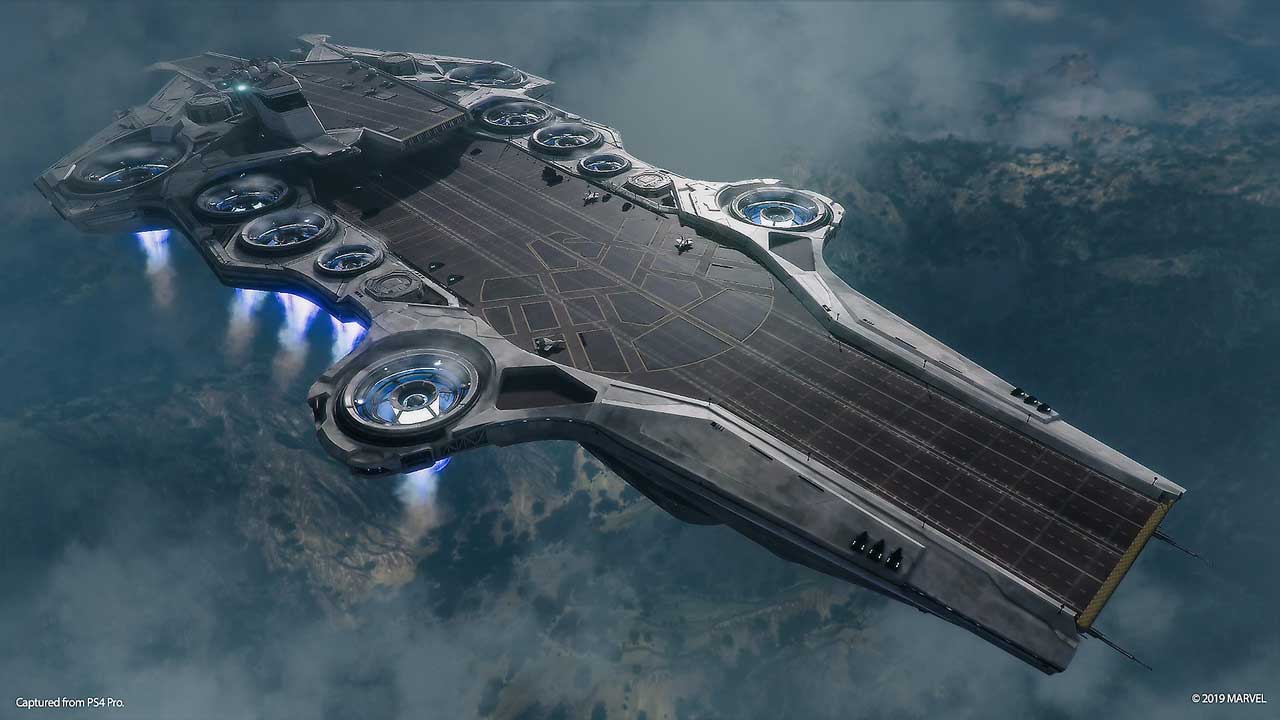 These upgrade points are spent to unlock new weapons and suit abilities for Iron Man. Missiles, faster healing recharge, quicker boosts and acceleration and more. You can also have two loadouts so if you are going for time trials then you want a loadout that includes all your speed upgraded. Combat Challenges, you will want to take the most violent loadout you have. There’s also a handful of suit shaders you can earn by completing specific objectives. They are quite easy to complete such as destroying two drones with a single shot. These unlock awesome-looking suit variants to wear in missions.

The game is a chunky VR experience. A playthrough of Marvel’s Iron Man VR will last well over 7 hours without even touching the extra challenges. However, a lot of that time will be spent waiting for the game to load. Marvel’s Iron Man VR has some of the longest loading time I have ever seen in a video game. So much so that I had to sit down during them as my back was getting sore standing all the time. Every stage will take over a minute to load. Tony then says a line and then another 20-seconds is spent starring at a black screen with more loading. Some cutscenes are short and then results in even more loading after 4 minutes of watching FRIDAY and Gunsmith talk. Just be prepared, there is a lot of long loading and waiting here. Often, it gets a bit painful to stand there and wait. The fact that you are in a VR headset makes it even worse. You cannot even pick up your phone and scrolls through Facebook while you wait. 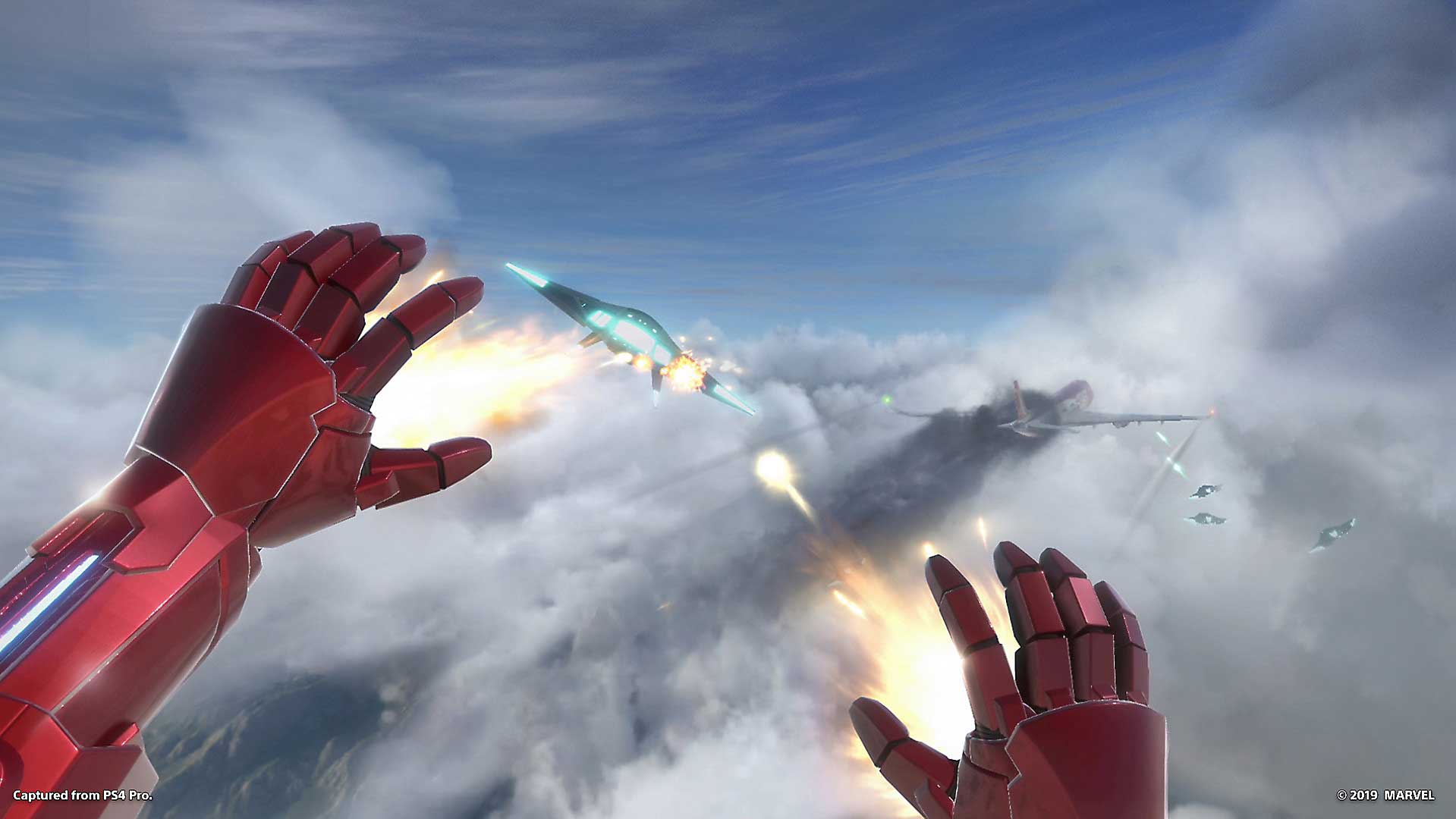 With that being said, the overall presentation of the game makes the loading screens understandable. Every little detail has been brought to life through the VR lens. Iron Man’s suit is crafted to the utmost attention to detail. His house and garage look alive with artwork and objects to interact with. There’s a lot of love here and Camouflaj clearly spent a lot of time crafting this passion project.

“When it comes to comfort, the game is quite intense. The flying and movement will require that you take constant breaks. You can move the camera in both a snap and smooth movement. I handled it quite well and played for 1-hour bursts. Did not feel too ill but definitely felt lightheaded for a bit afterwards.”

Marvel’s Iron Man VR is unlike anything I have played before. It is indeed a VR defining experience and while the controls are tough to master, the gameplay is just top-notch. You know, we play VR to have these experiences that break the barriers delivered with a controller. Marvel’s Iron Man VR is a perfect example of why VR exists and the possibilities of it. It is must-play for anyone who owns the device and an unforgettable and unique game.

This Marvel’s Iron Man VR review was based on a code sent to us by PlayStation. This game required two motion controller to play and has no DualShock 4 support.