After two decades, Sir Daniel Fortesque, Sir Dan for short, returns in the MediEvil Remake and the would-be hero looks fantastic considering his age. Players can once again jump into the boots of this iconic character and fight the forces of evil in a quest of redemption to save the kingdom of Gallowmere from the evil sorcerer Zarok, built from the ground up by developer Other Ocean Emeryville and published by Sony Interactive Entertainment.

Sir Dan’s goal is simple – Stop Zarok once and for all and redeem himself for taking an arrow during the first charge 100 years ago, falling in battle before even swinging his sword. It is a story of the redemption of a would-be hero that has gotten another shot at being a real hero and this story plays out just as well as it did 20 years ago on the original PlayStation.

If you want to see the game in action instead of reading through this MediEvil Remake review, then check out our video review below, continue on reading, or both!

The MediEvil Remake is almost an exact replica of the original brought back to life with 4K graphics and enhanced sound as well as an improved camera system, retaining all the gameplay of the original, for better or worse.

In over 10 hours with the game, I fought countless undead enemies, from hordes of zombies to ghosts, pumpkins and even a dragon in over 20 levels that have all been faithfully recreated. These levels are exactly the same to the point that you can use a walkthrough from 1998 for the puzzles and finding hidden items, from the first graveyard all the way to the Sleeping City, the Strawfields and even a Ghost Ship. 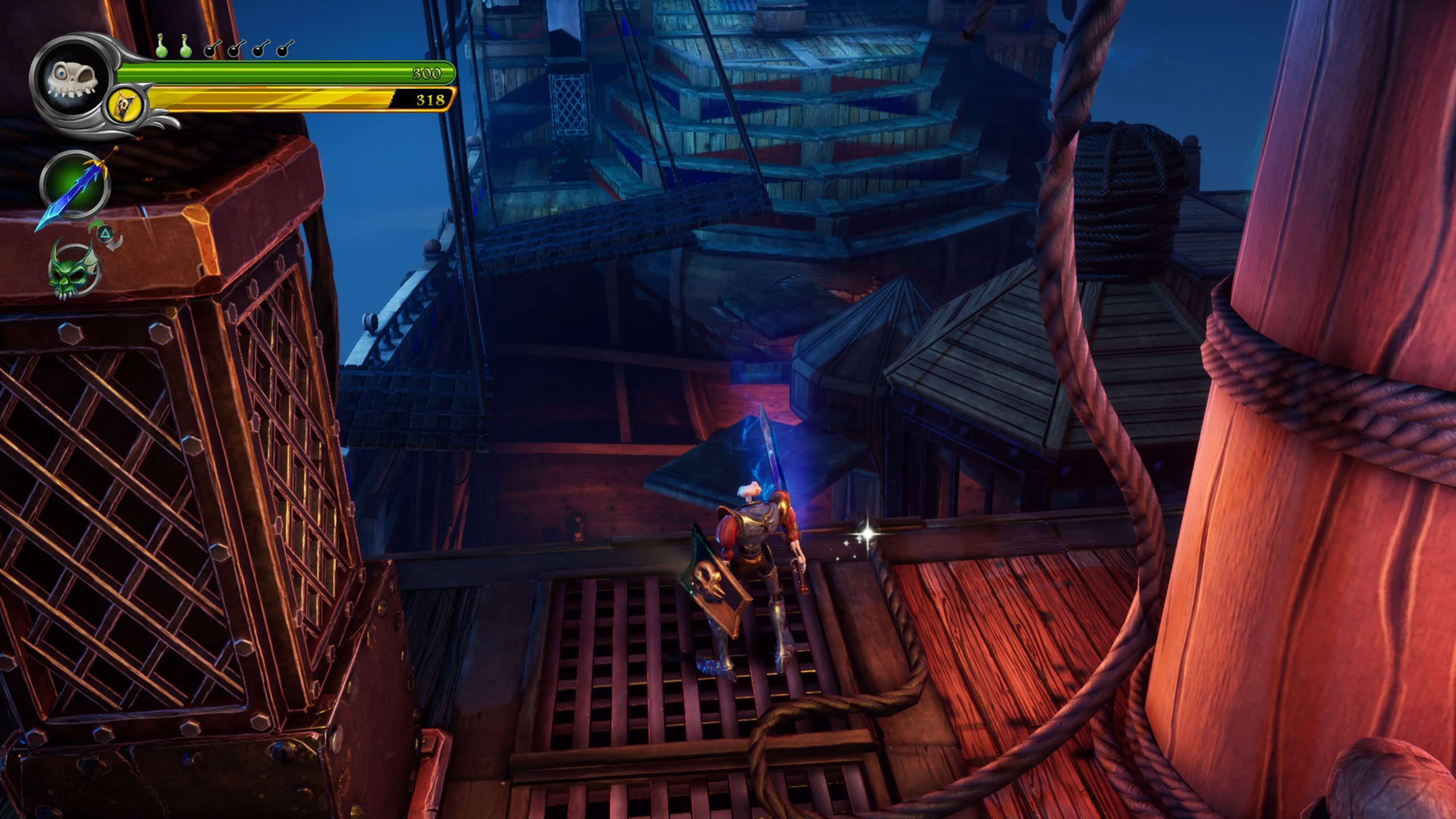 What the MediEvil Remake does exceptionally well is bring Sir Dan’s awesome journey to the PS4 with style and everything looks more colourful, but still retains that feeling from 20 years ago. The recreation is so well done in every aspect and the locations, as well as characters, are instantly recognizable through its shiny coat of paint.

The sound is also fantastic, with some of it being enhanced from the original, while other things like the soundtrack have been completely redone. Even the map between levels looks absolutely gorgeous and colourful. 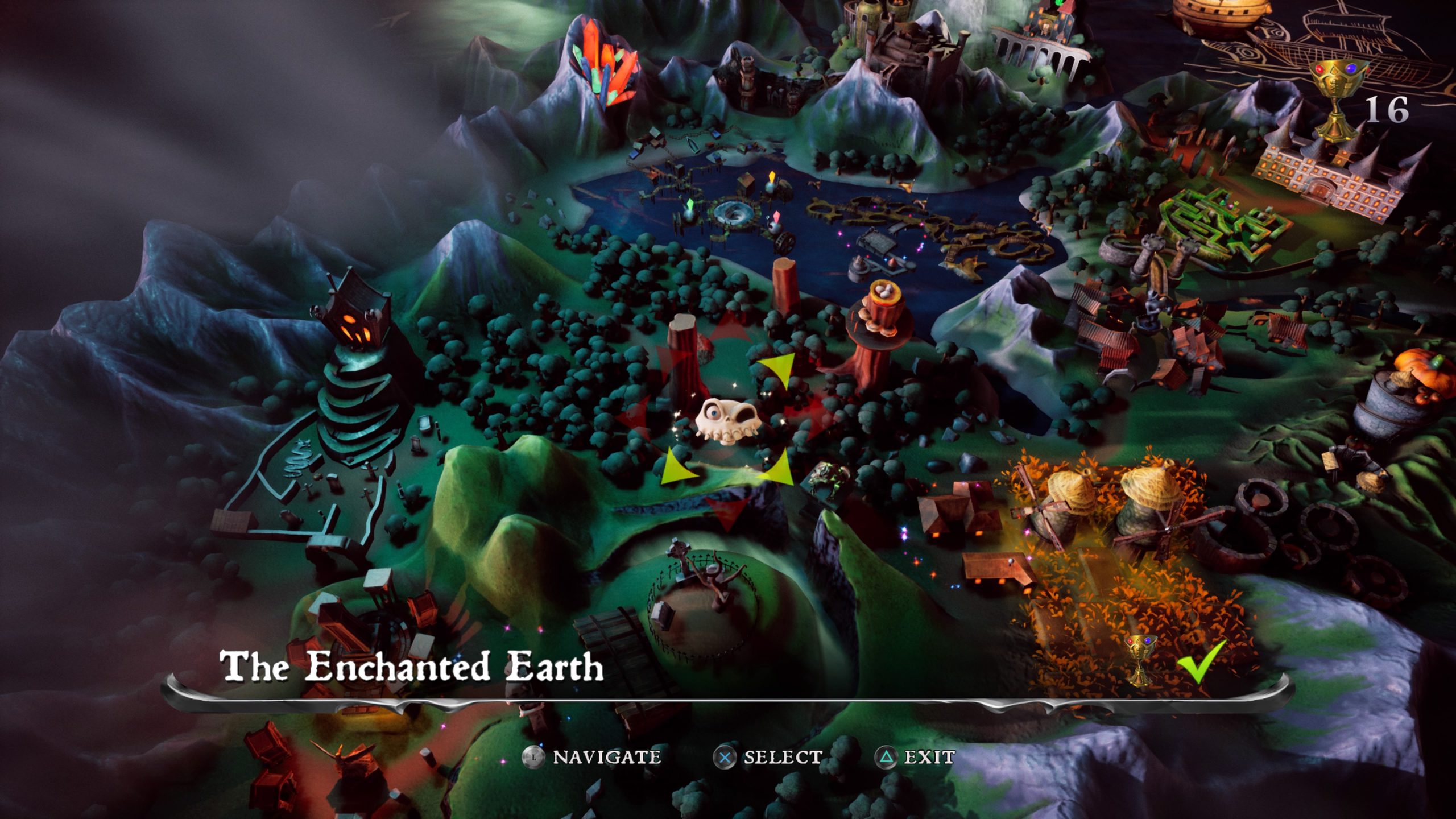 Apart from the graphics and sound, the gameplay remains the same, as we made our way through each level trying to complete the Chalice and getting a new weapon from the Hall of Heroes as a reward. Each of these weapons feels unique from a giant hammer that can smash through walls and charge up a lightning attack, to a magic bow and a magic sword that can devastate enemies with a whirling attack. These weapons, as well as the beautiful and diverse levels, kept the experience fresh throughout.

It is inside these faithfully recreated levels that some issues rise from the dead, as the movement feels very slippery just like it did in the original. Sir Dan didn’t stop exactly where I wanted him to and while not a big issue, it almost felt as if he was running a bit too quickly with those bony legs of his. This caused some frustrating deaths that could have been avoided if the movement was just a little bit more grounded and solid.

Then, there’s also the combat and hitting enemies or being hit doesn’t feel like it has any noticeable impact, resulting in the need to constantly look at Sir Dan’s health bar to see if I took damage from some zombies or not. This is very evident throughout the game and you can see it in our video at the start of this article, showcasing the notoriously difficult Asylum level with dozens of enemies. It is something to get used to and it can become a little bit frustrating as well, but that’s how the original game played back in the day and the developer’s goal was to bring the game to a new generation, not to change it up.

During levels where you have to avoid objects or jump at the correct time, the slippery movement and the feeling that Sir Dan is floating at times caused quite a few unnecessary deaths in my playthrough, not to mention trying to avoid boulders in one of the early levels that was really annoying thanks to Dan refusing to jump up where he was supposed to, or just falling off a walkway where it looked like I was safe from harm. 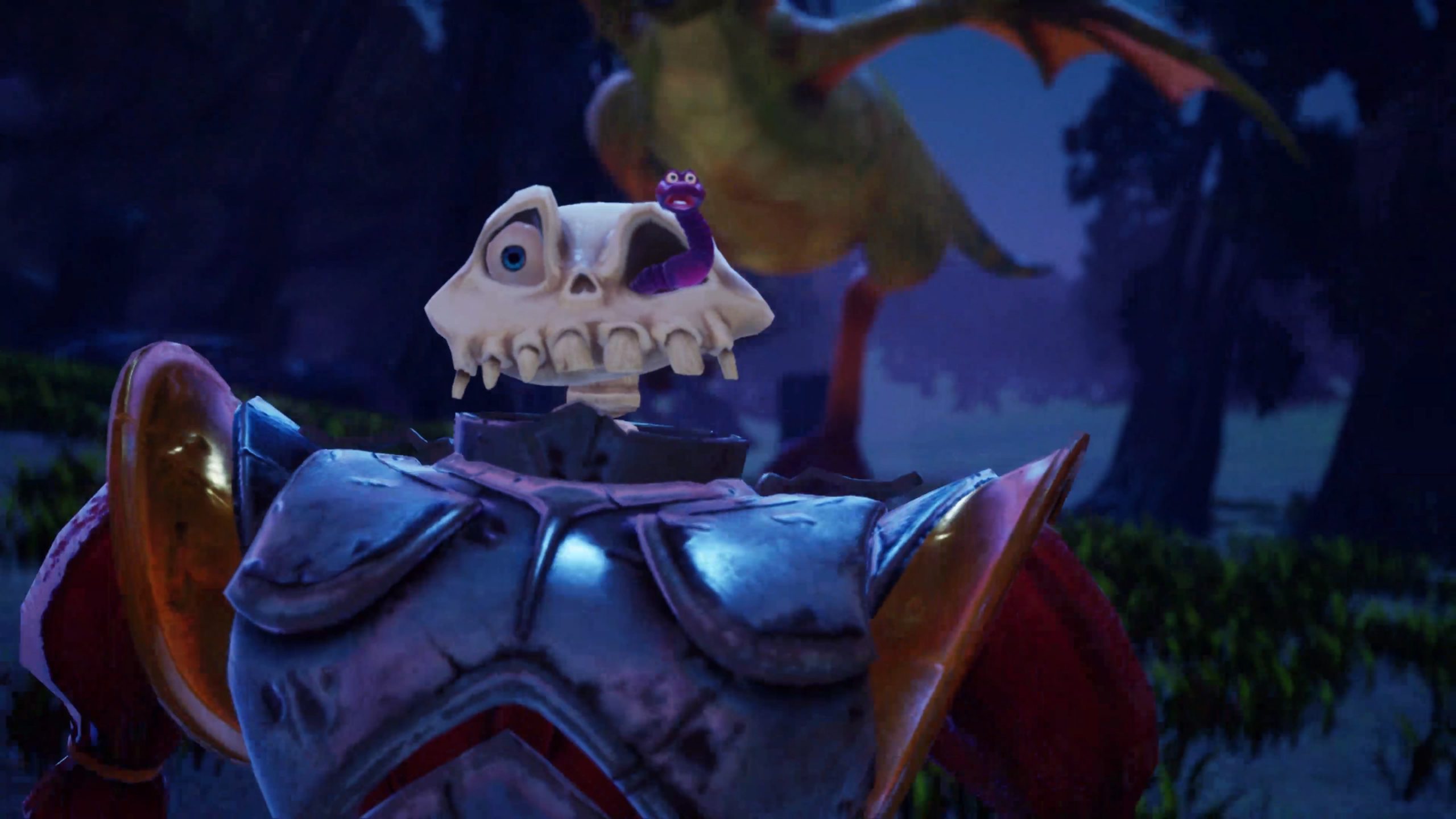 The camera system has been reworked for the MediEvil Remake, but it is still not perfect as issues persist through the game and it is sometimes hard to spot enemies or doors that I had to go through in order to progress in the story. Other times, enemies just froze in place and during the final battle which I don’t want to show you to avoid spoilers, the enemy was floating in the air and it definitely wasn’t supposed to. Further, the camera sometimes just spazzes out as you can see in the image below, Sir Dan can’t be seen. It would have been nice to have transparent objects when the camera does move into an angle like this one. But the reasons MediEvil was such a great hack and slash title back in the day wasn’t about its graphics or sound and gamers pushed through some technical issues. It was and still is the diverse levels, interesting and sometimes frustrating puzzles, as well as the humour and great voice acting from the characters that made the game stand out.

Through exploration and taking our time with each level, I also uncovered more fun characters, from a skeleton that we needed to give a new music script to, to the Witch of the Pumpkin Patch that wanted me to kill a giant, evil pumpkin that was influencing the young ones. 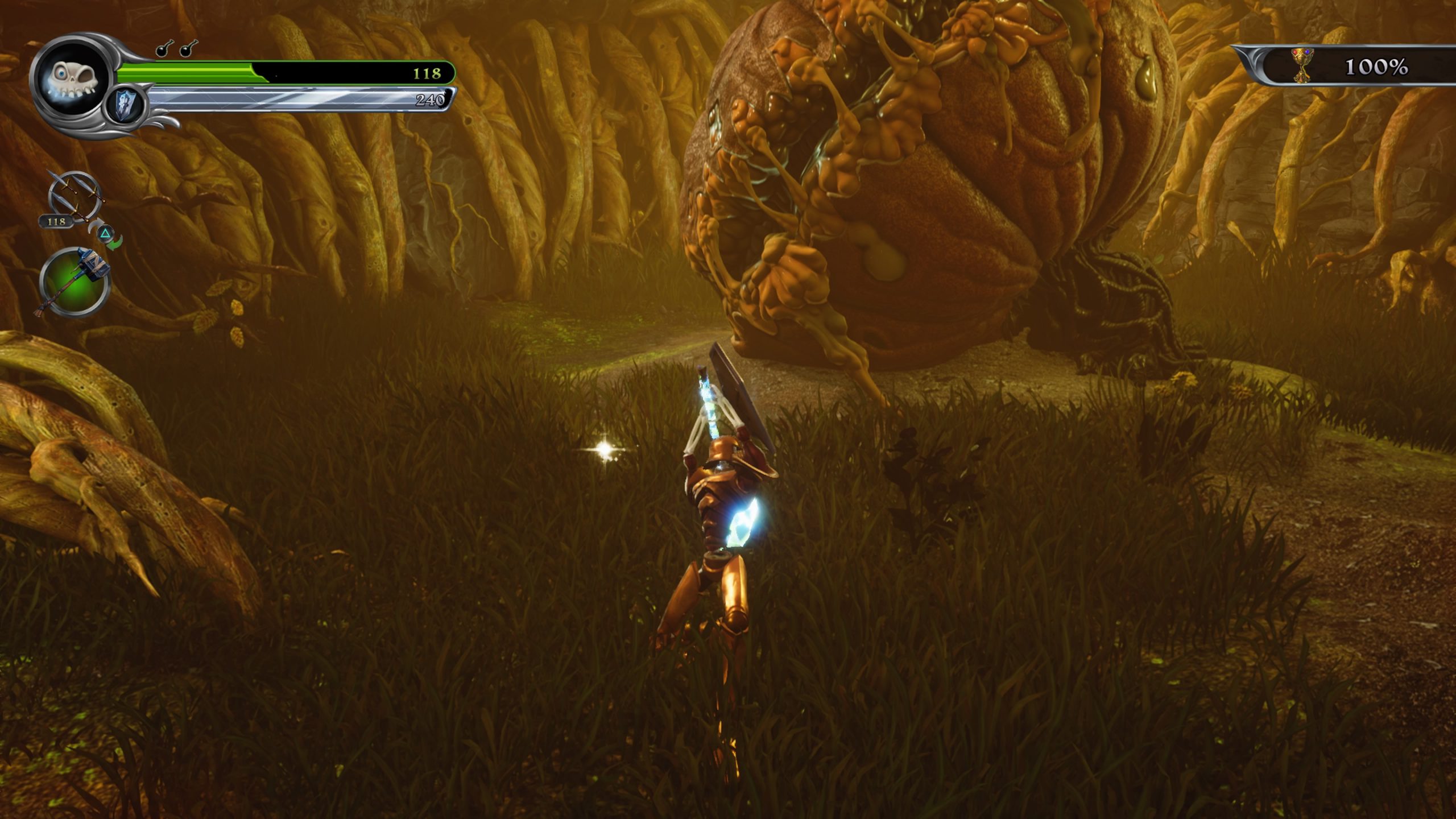 Sir Dan retains his loveable demeanour and all the enemies are interesting, well animated and provide a different type of challenge to the player. Speaking of which, the MediEvil Remake is quite challenging throwing hordes of spooky creatures and great puzzles at the player, while not holding your hand at all, but the best part about the game has to be the boss fights.

Although some boss fights suffer from camera issues, each and every one of them are unique and challenged us in a different way, from a stained-glass monstrosity to a dragon that you have to defeat by dropping rocks on his head, a giant pumpkin, the captain of a ghost ship and a whole lot more. 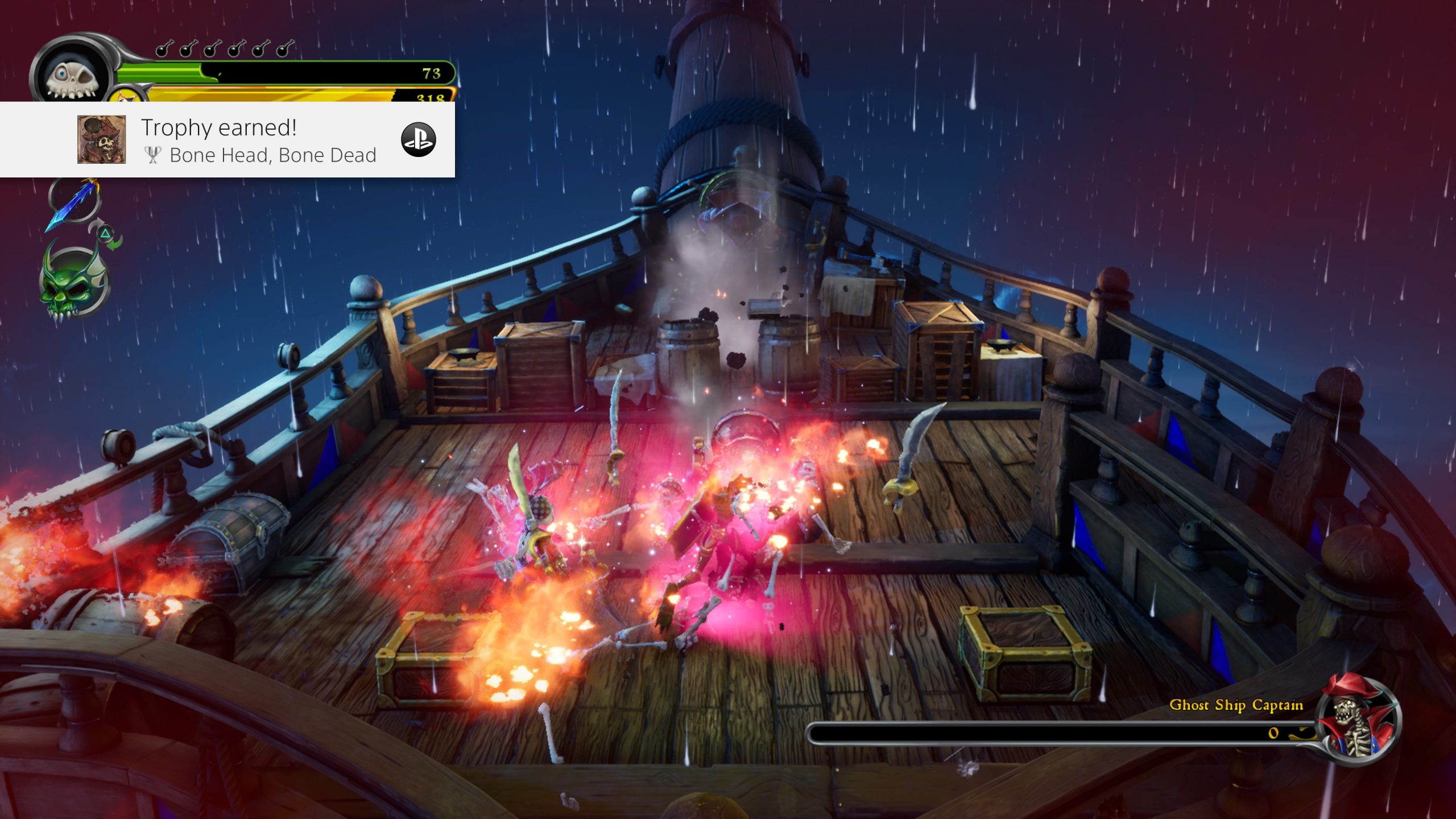 All of these bosses are memorable and well made, including the final boss that boasts three different phases and is quite a challenge to take down.

The MediEvil Remake from Other Ocean Emeryville and Sony Interactive Entertainment doesn’t fully redeem itself from the mistakes of the original as the camera, although better, is far from perfect and the combat, as well as the movement, is still slippery. However, the game also delivers all the things gamers loved from the original, from the awesome levels and enemies to the humour and the diverse boss fights in an experience that can last between eight and fifteen hours depending on player skill and how many items you plan on collecting.

As a remake, MediEvil does exactly what it wanted to achieve and has brought Sir Dan’s adventure back to life for a new generation to experience. It is a game drenched in nostalgia that doesn’t shy away from what it is, all delivered with a beautiful and colourful new coat of paint that fans of the original and newcomers will enjoy.

Stay tuned for more MediEvil Remake coverage as we will throw some guides your way, including a gold farming guide tomorrow as well as how to kill the final boss this coming Friday, 25 October 2019.