Monster Energy Supercross – The Official Videogame 3 is almost like every other Supercross game released in the past three years. Sure, it has the “Monster Energy” stamp on it but if you have played the first or second game and enjoyed it, there’s pretty much nothing new to see here. The game successfully captures the magic of the sport in more ways than I could have ever imagined and the races result in some fun and exhilarating moments. Does the world really need a third entry in the series? Not really as the game comes across more of a shameless cash grab than anything else but for the most part, it is a fun one.

What sets the game apart from Supercross 2 is the changes to the overall experience and a handful of some UI tweaks. Bikes immediately felt better than ever with handling issues fixed as I whipped into the air and slammed onto the ground with ease. Bikes felt a lot more grounded as if they had a weight to them. This was an issue I had with last year’s entry as handling just felt a little bit off most of the time. 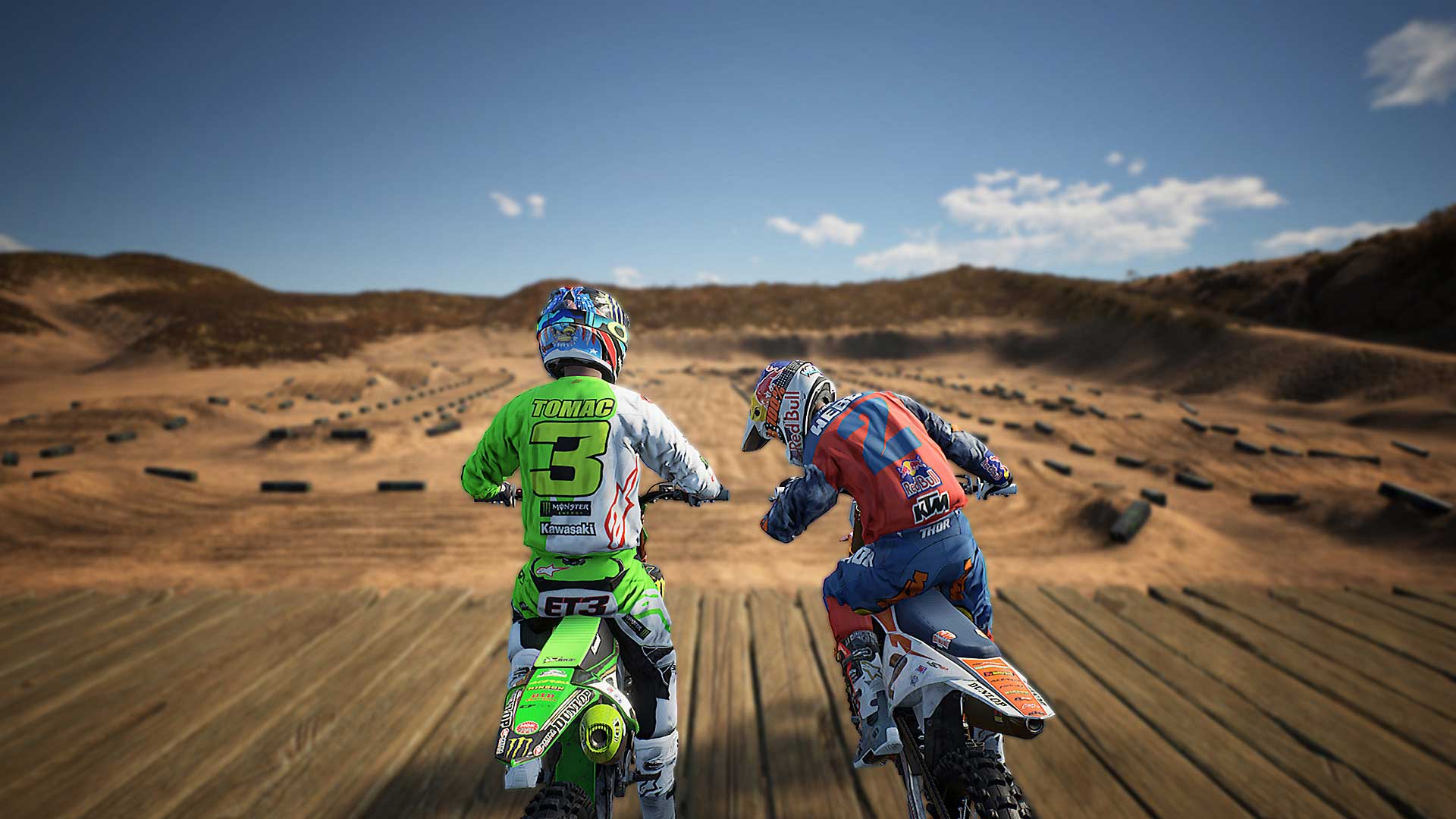 Monster Energy Supercross – The Official Videogame 3 kicks off with a shoddy tutorial system that is as basic as it could get. It tells you what buttons to press and how to move. It was a major let down and obviously requires that you have at least some experience with Supercross games. If you don’t, you will have to learn your own way around the complicated modes such as weight distribution and timing your jumps. The lack of a decent tutorial can be overlooked but for a game with a “realistic” mode, it kind of felt like it was needed.

Monster Energy Supercross – The Official Videogame 3 is also easy enough to just pick up and play and strays off the path of “simulator” to deliver a fairly accessible game. You can switch between two handling modes being “standard” and “realistic” and each of them offer a different approach to each race. Realistic really requires the full concentration of not only your bike but the environment around you and how you approach each race. I found myself needing to shift weight, control my side-to-side movements and even master the perfect turn by predicting my land while ramping off the next sand dune.

It was far from easy and often I would curse at my bail wondering why and how it happened. The slightest mistake like touching the side of the track would impact my path for the next few seconds while I tried to get back into the race and balance myself back on track. I was to blame for the issues though and not the game. If you mess up on the realistic mode, you will know about it. The “standard” layout is a lot easier to master and most of all, much more forgiving. It meant less trying to take back control when I messed up and more focusing on the competitors, ramps and turns. At least I could take advantage of the rewind system which also offers rewards for when you don’t use it at all.

Progression in Monster Energy Supercross – The Official Videogame 3 is much like any other racing game. You start out at a specific rank and need to work your way up to becoming the world champion. The event calendar from the previous game has been removed for some reason which saw you take on daily challenges across various modes. Now, Team Day races let you take on a race or two but they are boring and there’s no real incentive to participate in them. There was something great about a calendar that made the game feel like it was ever-changing. Not sure why they removed it. 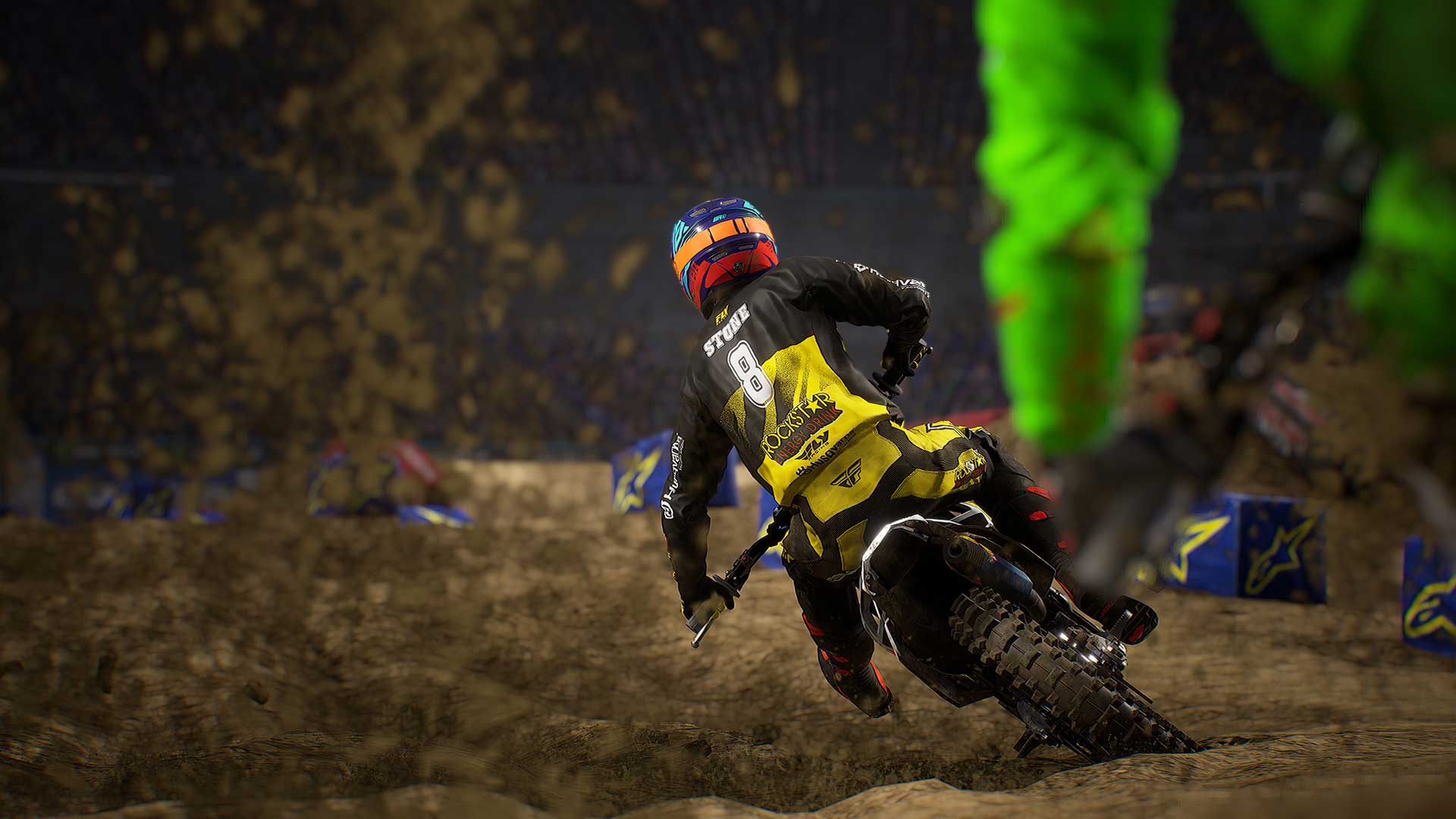 The game includes the somewhat great track editor which lets you go to town by creating your dream lap but unfortunately, the user-created tracks are just XP farming and created for trophies. You won’t find much real creativity here. Speaking of user-created content, the multiplayer is also buggy. The game runs on dedicated servers but connectivity issues were present throughout my time online. With that being said, there’s some fun to be had in the multiplayer game modes. Knock-Out, Checkpoint, and Treasure Hunt all offer some fun times as you compete against other players but I could not help but feel the novelty wearing off faster than I expected.

As for the career mode, it is also just slapped together in the most uninspiring way possible and feels too samey compared to last year’s release. You can unlock some customization items, race in some exciting challenges and listen to the overenthusiastic commentators scream at you but that all happened in the last game too. There’s no real innovation at play here and unfortunately, after the third game, if you’re not trying something new, you are going to be left behind.

Monster Energy Supercross – The Official Videogame 3 plays it safe. It is pretty much the same thing as last year’s release with a new UI and some new fancy menus. It feels like a shameless cash grab with more missing features than new ones.