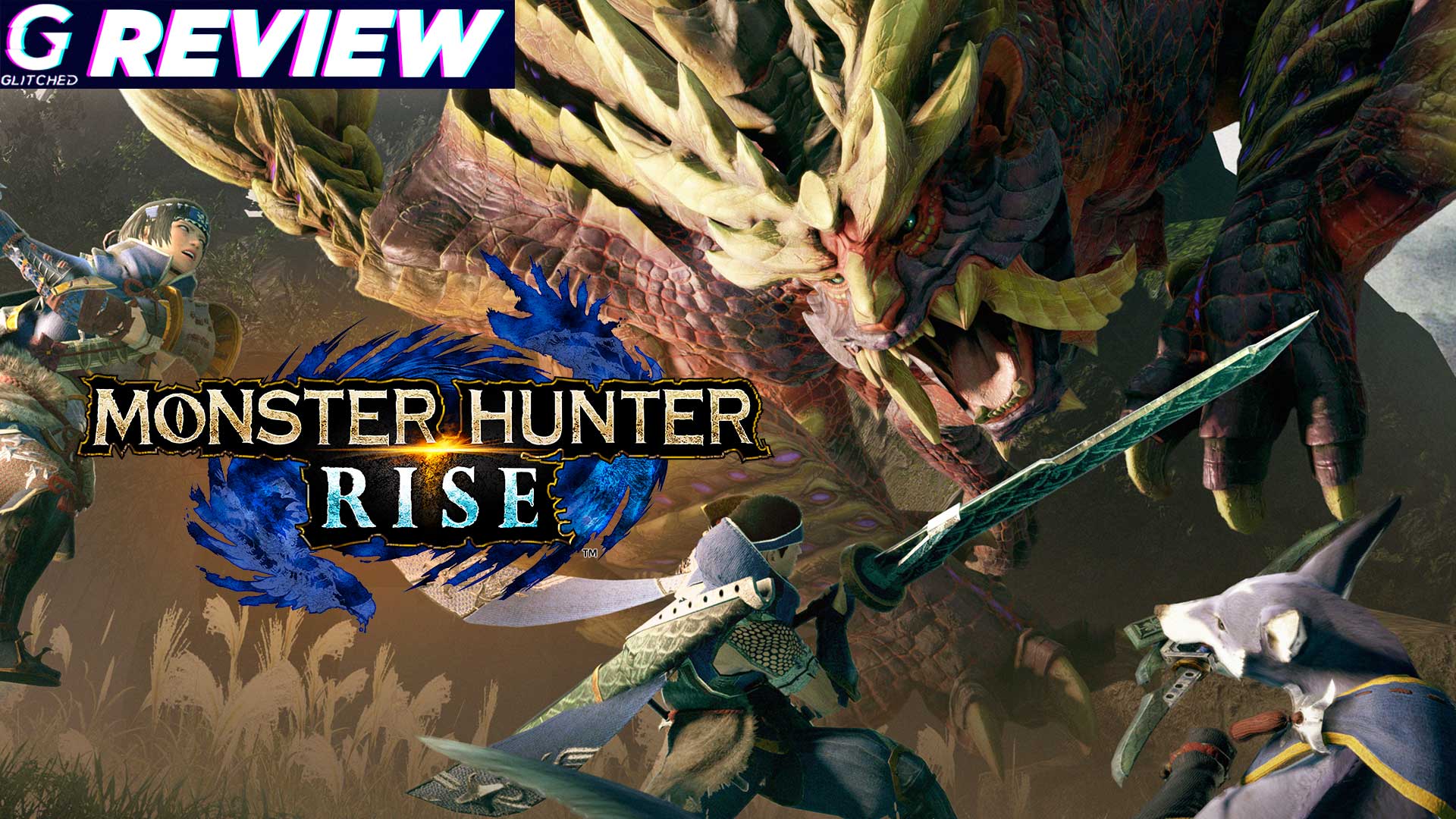 Back in 2018 while most of the world was experiencing Capcom’s latest and greatest entry in the Monster Hunter series dubbed “World”, Nintendo Switch owners were forced to sit back and twiddle their thumbs due to the lack of support on the platform. Since then, Monster Hunter World has released on PC and received loads of content updates and an expansion. Now the tables have turned in 2021 as Monster Hunter Rise finally aims to deliver everything Switch owners missed out on and you are entitled to feel left out if you don’t own the console because Rise is remarkable.

For the most part, Monster Hunter Rise feels and plays very much like World. The environments, a handful of monsters, the item system and even the crafting systems feel like they have been plucked from the 2018 release. However, everything has seen some sort of tweak to some degree. Sort of as if this game is meant to be the “definitive” experience of the World formula. It works and once I got into the rhythm of the game, I could hardly put it down.

There’s always this level of excitement that comes with a new Monster Hunter game. Discovering each location, uncovering each monster and its weakness, armour and weapons and of course, creating the perfect build to take on the high-rank content. Rise is no different and while the story leaves much to be desired, the gameplay loop is superb.

Monster Hunter Rise takes place in the land of Kamura with heavy Japanese inspiration. The village and main hubs are represented by giant Japanese temples with walkways scattered in cherry blossom trees. Right from the start, the game’s overall direction is clear. This is a Japanese Monster Hunter and this theme oozes into everything that the game offers which is “new”. 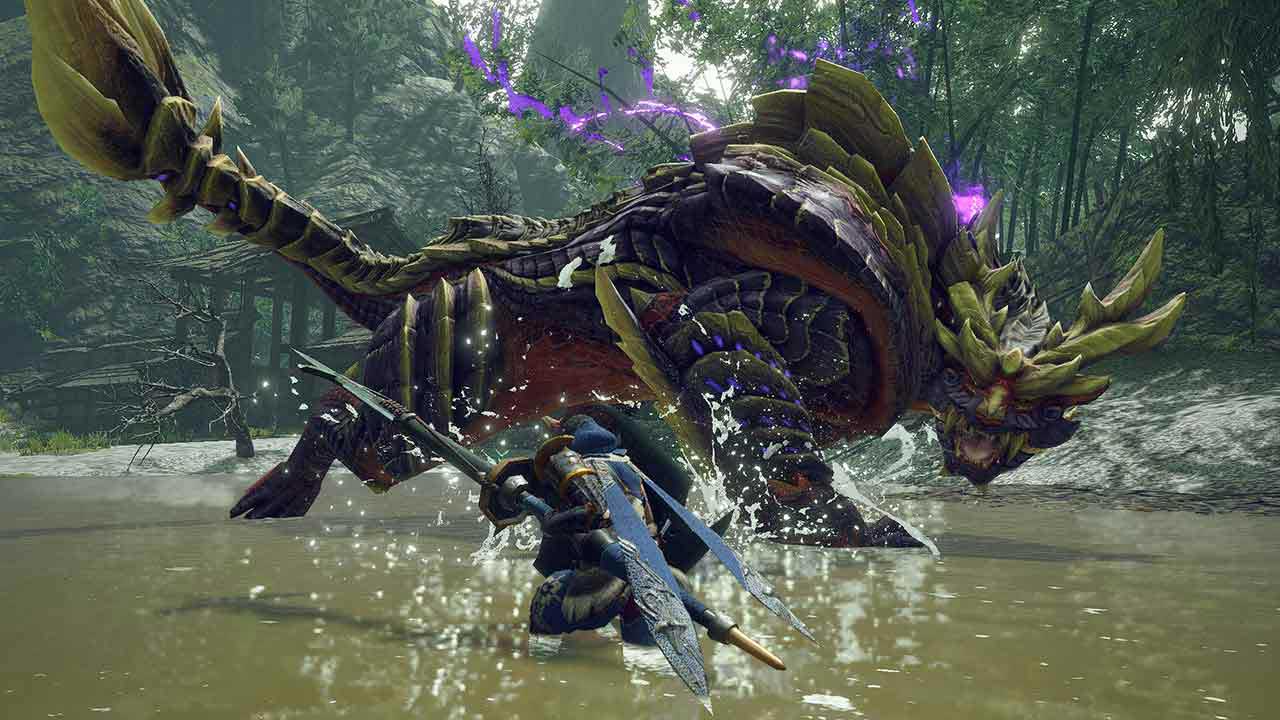 Even the first few hubs which I explored were set on a Japanese mountain with temple ruins nesting monsters and the rocky mountains lush with bamboo. Monster Hunter Rise is not short of personality and the game’s setting manages to deliver a refreshing approach for someone like me who has spent hundreds of hours in World. Those familiar with Monster Hunter will know by now that your adventure is accompanied by companions called Palicos. However, this time around the system is even more detailed. Players can hire Palicos, which are the cats, and Palamutes, which are dogs, to take with you on missions.

This new Buddy System opens up a plethora of new features to master, loadouts to tweak and of course, roles to assign. Palicos and Palamutes all have their own skillset which can be tweaked, roles that are vital for combat and gear that you will fall in love with. If you think a cute fluffy hoodie looked great on your Palico, just wait until you see your Palamute dressed up as a Power Ranger beast. It is fantastic and a major reason why we love the series so much. 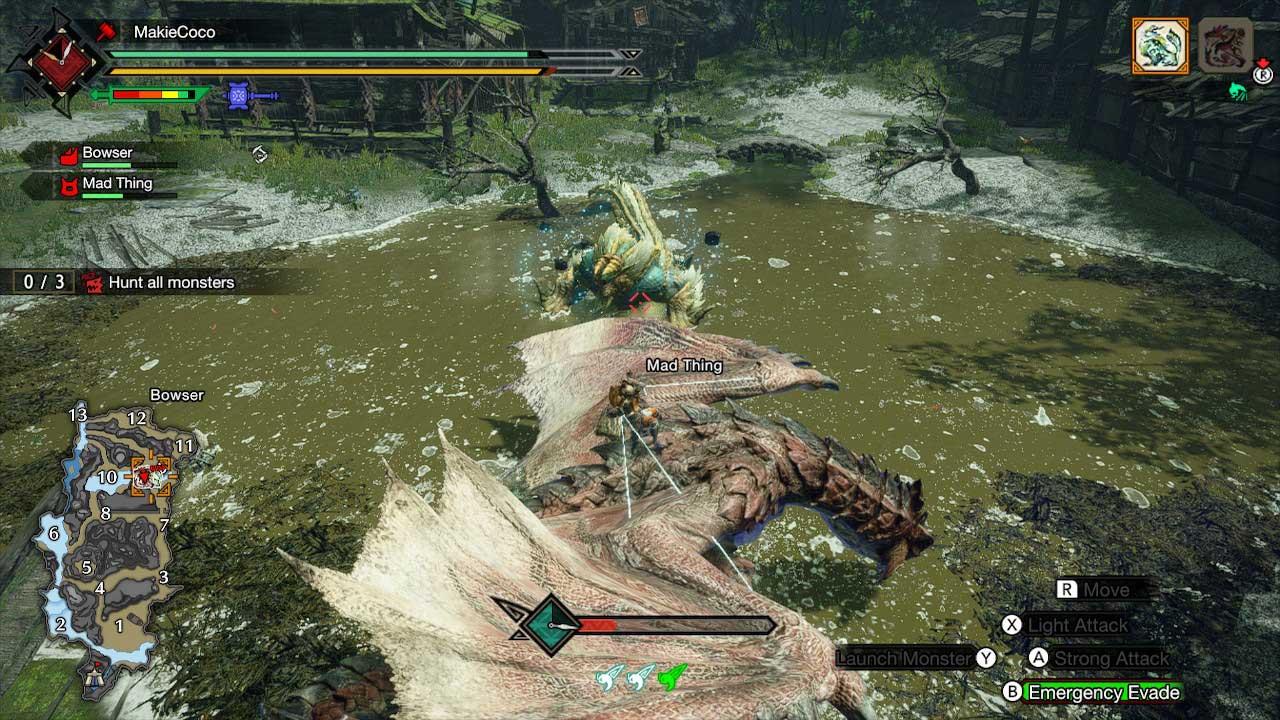 Then there’s the character weapon and armour system that relies on gathering the right materials by either slaying beastly monsters or knocking at rocks for a few minutes to find the right crafting material to make that perfect hammer. If you have played Monster Hunter World, the armour has not changed from any of those monsters. However, the real excitement comes from all the new monsters exclusive to Rise and there are plenty to slay.

Of course, there’s the flagship monster Magnamalo but the game is littered with dozens more. So much so that even on Hunter Rank 6 and up, I was discovering new menacing monsters to slay for the very first time. This variety goes a long way in keeping players intrigued even after hitting the 50-hour mark. It adds to the general gameplay loop and that constant “one more monster before bed” approach that I adopted even though I killed three more before I went to sleep. 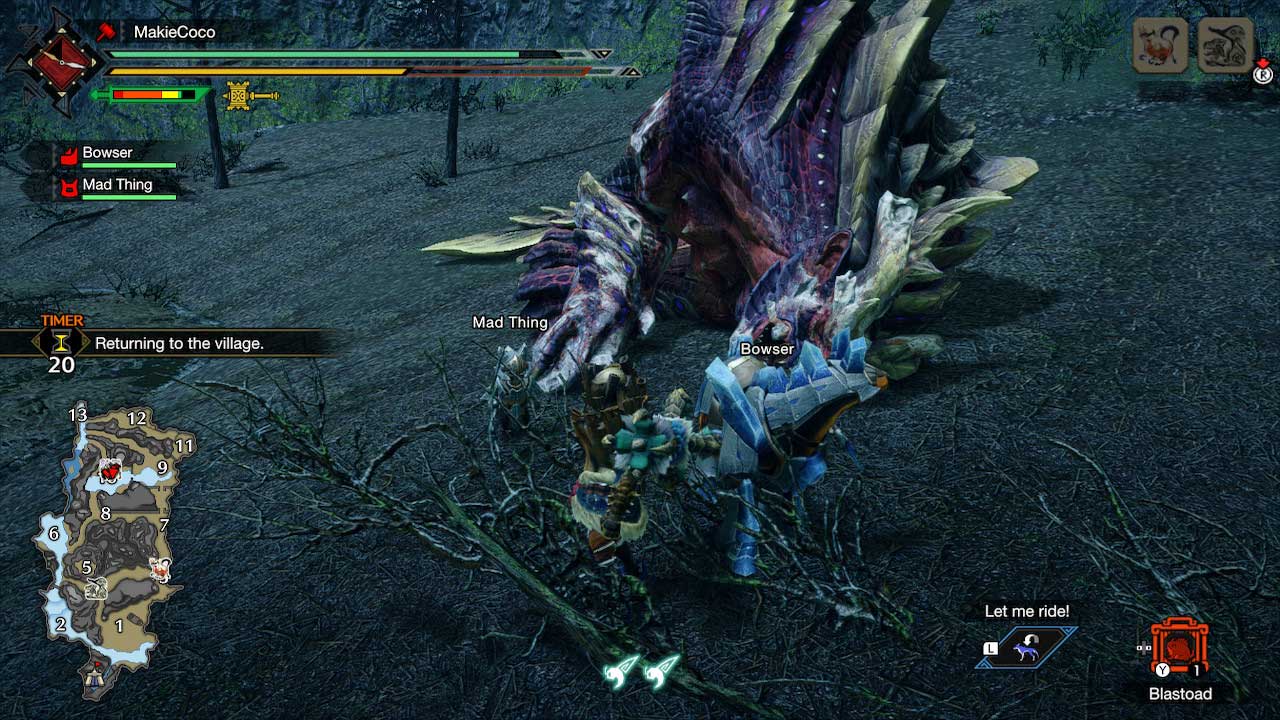 Monster Hunter Rise feels like a refined version of World when it comes to these new monsters too as some of them deliver surprising new mechanics to master. For example, Bishaten is a crazy winged ape that tosses fruit at you. If you knock him down, you can then collect this fruit for yourself. Almudron is a freakish mud snake that builds platforms out of mud which I had to climb atop to avoid his wave of dirty water from washing me away. I was always left wondering how a new monster would test me and what sort of surprises awaited in the hub ahead.

Those of you who have played World will also relate to the returning monsters in Rise. There’s a lot of them here including the iconic Diablos, Rathalos, and everyone’s favourite Kulu-Ya-Ku. However, the real fun awaits you in the later game and Nintendo does not want me to talk about it and I don’t blame them. These monsters are exciting to discover and even more exhilarating to slay. It is the whole point of Monster Hunter in the first place. I went with a hammer build for my entire playthrough of Monster Hunter Rise. I have always enjoyed sliding down a hill and walloping a monster with a spin-to-win attack. I coupled that with some Attack Boost Barroth gear and later in the game built an Ingot set. Combat in Rise is fun and no matter how many monsters I killed, it never got boring. There are a few new features that add to this including additional attack sets for some weapons and entirely new moves too. These moves are all performed with the aid of Wirebugs that have cool down. For example, the hammer let me use two Wirebug charges to perform a Hunting Edge. This attack saw me leap into the air and slam down on a monster with three heavy attacks performed throughout the move.

These attacks not only open up new ways to face a monster but at the same time, help with getting around an arena. I could use the Hunting Edge right before a smaller monster came charging at me so leap into the air and avoid being run over. Sure, I was limited to having the Wirebugs at my disposal but it creates balance. Another hammer attack was called Adamant Charged Slash and let me charge a powerful blow before launching my character forward and hitting the monster. It was great for damage but also better for quickly getting out of harm’s way. The Wirebug also comes in handy throughout the game. Be it grappling through the air after being knocked out of the sky or leaping up towards a cliff. The Palamute can also be mounted as it sprints through areas. After a while, I found myself combining his leap with a Wirebug pull to send myself flying into the air and smashing down on a sleeping monster. It is so much fun to use and I felt like a badass once I mastered it. Somehow, it also makes combat feel faster thanks to its quick manoeuvre abilities.

You can also Wyvern Ride now thanks to the Wirebug. This happens often during missions where a monster would collapse and I could wrap it up and get on its back. Here I was able to control it and either attack another monster with a light or heavy attack or just sprint into a wall and deal damage. Monster Hunter Rise also includes a new tower defence-like mode called Rampage. This mode relies on placing down mounted weapons, bombs, summoning hunters and beating the life out of monsters before they are able to break through the Kamura Village defences.  It is a fast-paced race to glory and relied on my understanding of the Wirebug, as it is used to get around, and all the available defences I could install on the blocks.

The early fights are a walk in the part but the later fights get quite intense. The monsters that come for the wall also have their own roles. Some target hunters, others are purely there to damage the wall and others destroy weapons I installed. So balancing everything in the arena at once was key to winning. It was exciting to go into a Rampage knowing that for the next twenty minutes, I would be running around mindlessly fighting monsters, building weapons and trying my best to keep the threat away. The mode is superb and delivers a nice approach to the traditional gameplay. 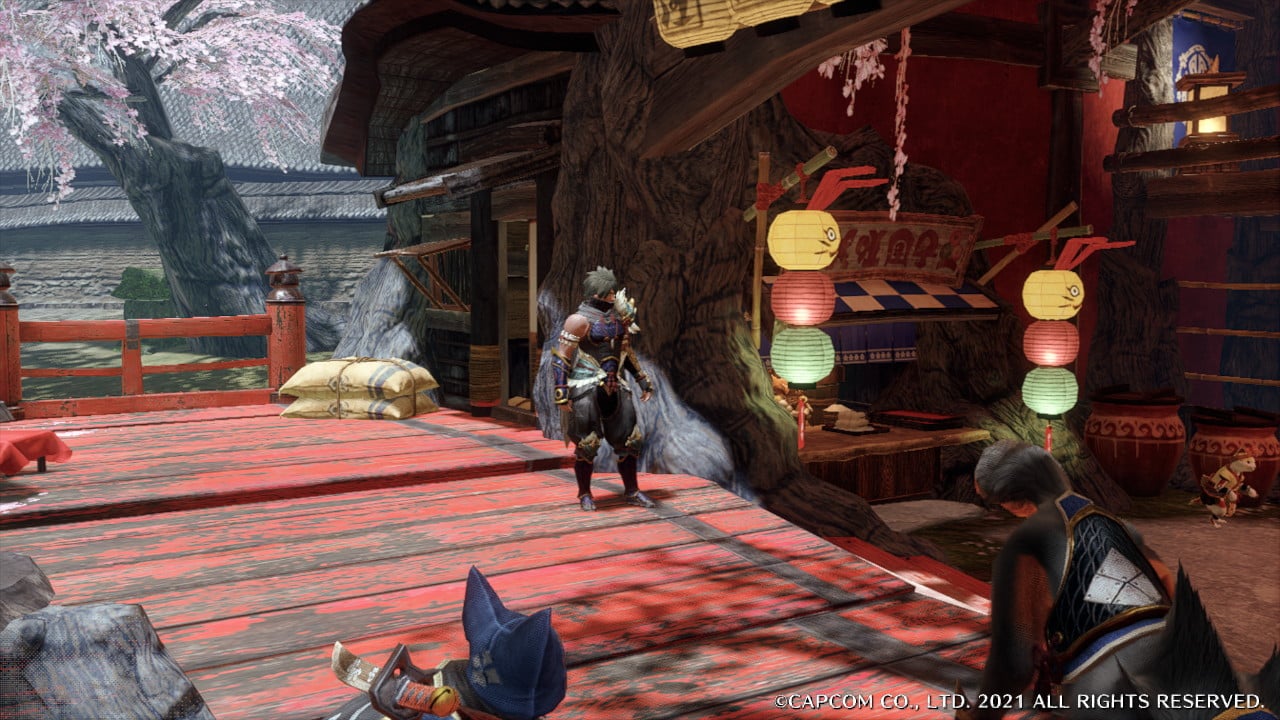 Monster Hunter Rise is better with friends and the online mode is great. I could not test it out fully due to the servers only being online for a few days. However, I took on quests, even did some Rampages with a co-op partner. You need to keep in mind that Rise’s main story is completely single-player. The game divides the quests up into two. You have the main quests and the Hub Quests. You can’t play the main quests with friends. Only the Hub Quests. While I thought this was going to be an issue, it wasn’t. The Hub Quests are where the game’s toughest of challenges come from and the main quests are limited to a small portion of the “story”.

There have clearly been some corners cut on the Nintendo Switch to get Monster Hunter Rise to run on the hardware. Hubs are smaller and hold fewer secrets and the visual quality is not the greatest in comparison to World. However, the game is still bucket loads fun and after tweaking my controller layout, I was hooked and didn’t even notice I was playing the game on a portable screen. It is an achievement for Capcom and the team behind the game. 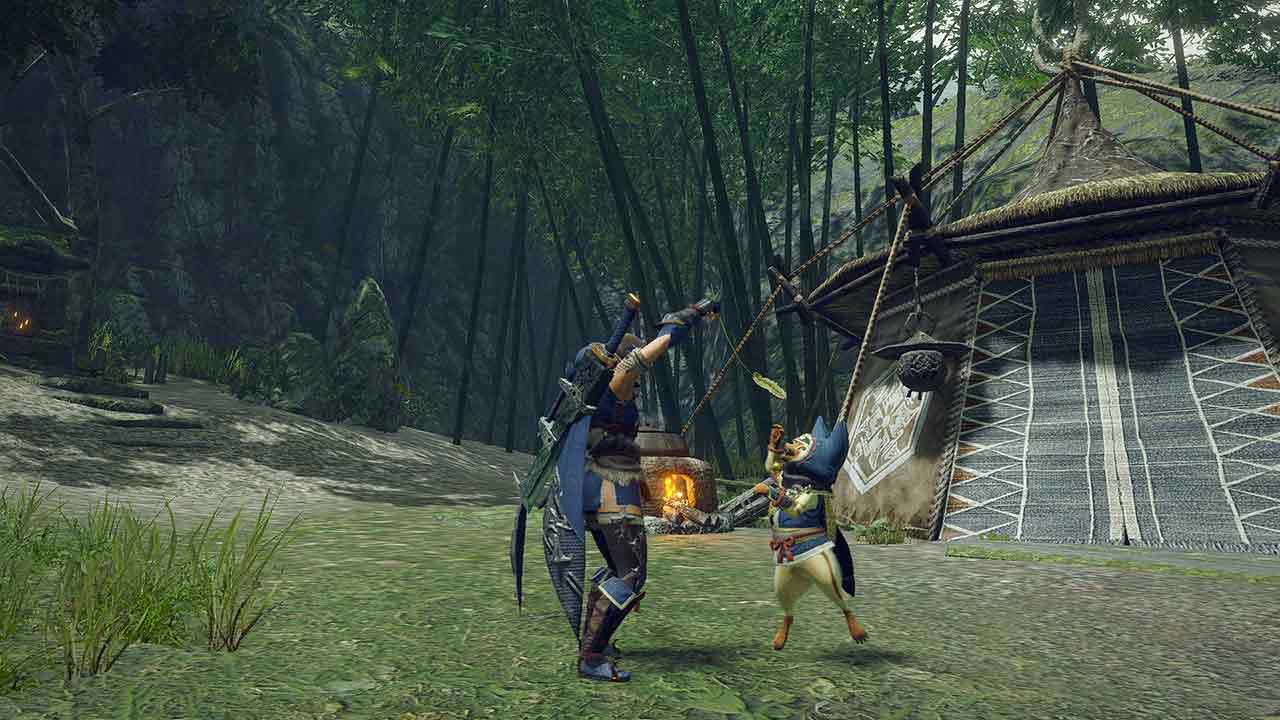 Although I crossed the 60-hour mark in Monster Hunter Rise, I was still scratching the surface of the fun you can have in the end-game. The grind to make the best decorations, gear, weapons and loadouts is aplenty here. Monsters get tougher and the game becomes quite unforgiving but that is what makes it so great. If I have to complain about one thing in Monster Hunter Rise it is that the story was just mediocre at best. It is forgettable and just lacked the same impact that World made.

Monster Hunter Rise includes a range of new features and tweaks to the traditional mechanics. Together, the game delivers a truly hardcore Monster Hunter experience that feels great to play. The new Wirebug makes combat feel faster, the Buddy System is great to invest your time into and the range of monsters makes every mission and Rampage more exciting than the last.

This Monster Hunter Rise review was based on a code sent to us by Nintendo.