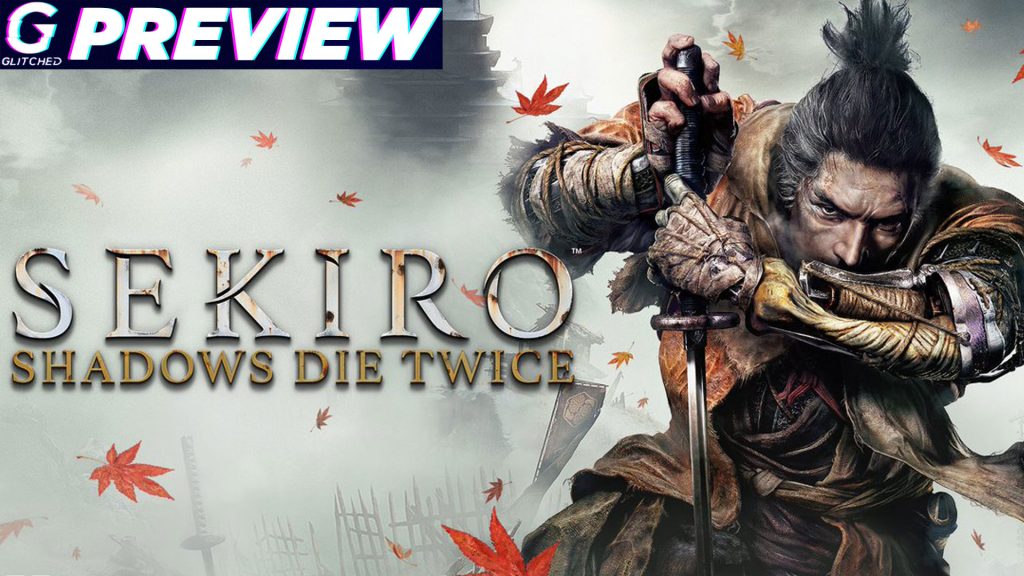 One thing is abundantly clear after playing the Mortal Kombat 11 Beta NetherRealm is back and better than ever in what is the most brutal, bloody and extreme fighting game to date. There is no doubt in my mind that Mortal Kombat 11 will satisfy the franchise’s bloodthirsty fanbase while also giving newcomers a kompletely fantastic experience. A new mechanic called Fatal Blows even provide newcomers with a feeling that they can do damage to their opponents. Everything about the game just screams quality.

If you would rather watch the game and all its gore and blood in action, then check out our Mortal Kombat 11 beta preview video below.

The Mortal Kombat 11 beta only gave us access to five kombatants and a few arenas of death but each of them shines brightly in every possible way from fantastic intros to exhilarating combat that is easy to begin with but extremely difficult to master. There are so many mechanics at work behind the scenes to deliver this Mortal Kombat experience. However, I am not one of those hardcore fans that count frames for each move and all that. Instead, all I know right now is that the combat feels incredibly smooth on the PS4 Pro and I didn’t encounter any bugs or things that felt unfair while getting my face smashed in. 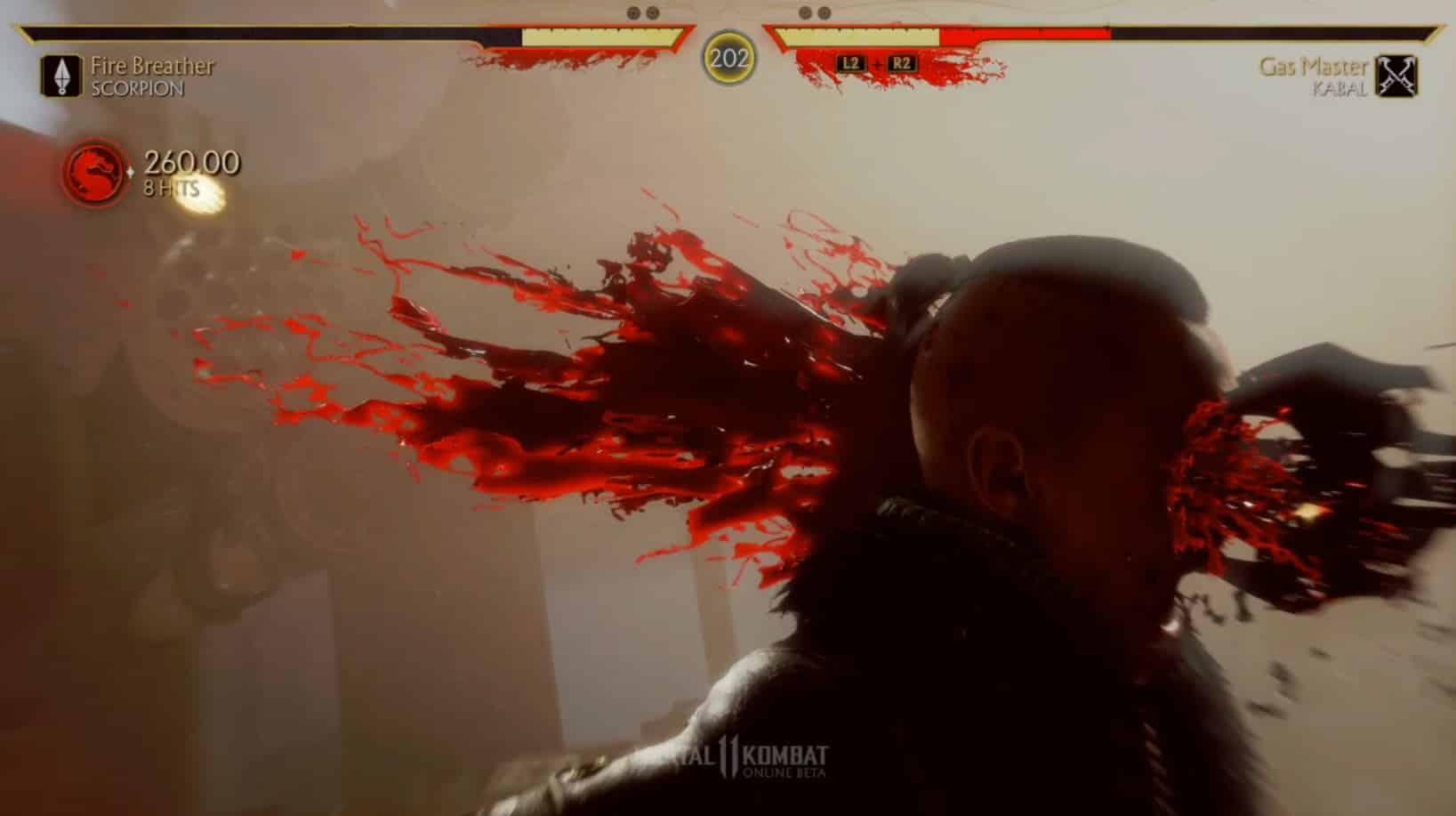 The Towers mode allowed me to play against weaker AI opponents at first, honing my skills with kombatants Jade, Kabal, Baraka, Scorpion and Skarlet. After feeling comfortable with all the game’s mechanics, from blocking to dodging and grabbing, as well as special moves, using the environment and figuring out how to pull off a few fatalities, I turned the difficulty up to 11 and got my face well and truly smashed against “very hard” AI opponents.

The Mortal Kombat 11 beta was a school of hard knocks as there was no training arena to hone our skills in, no tips on how to fight or anything at all. 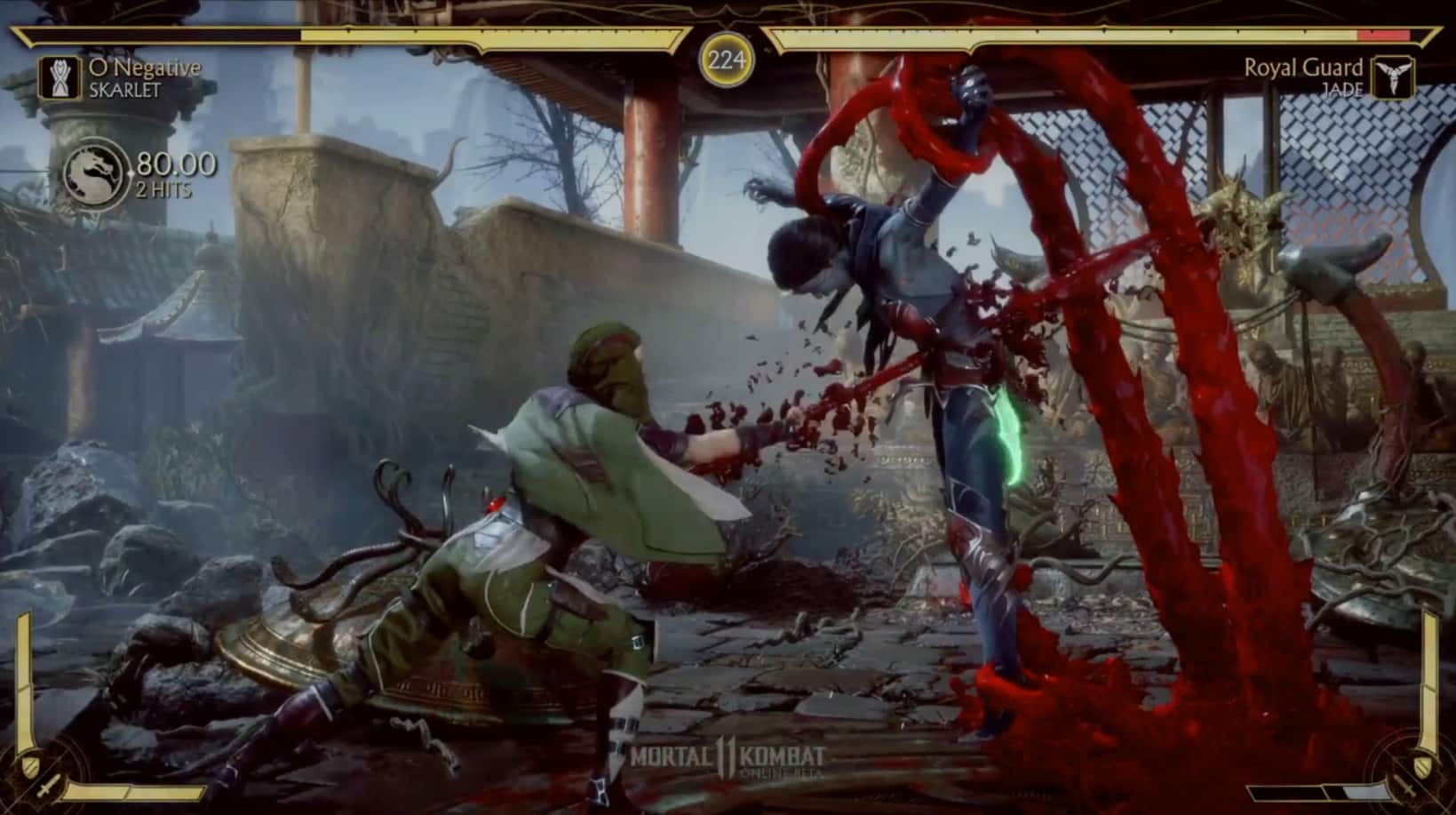 This, however, was a good thing, as you have to figure out everything for yourself, resulting in a gore-filled and rewarding learning experience. Don’t worry, in the full game, there are training features. 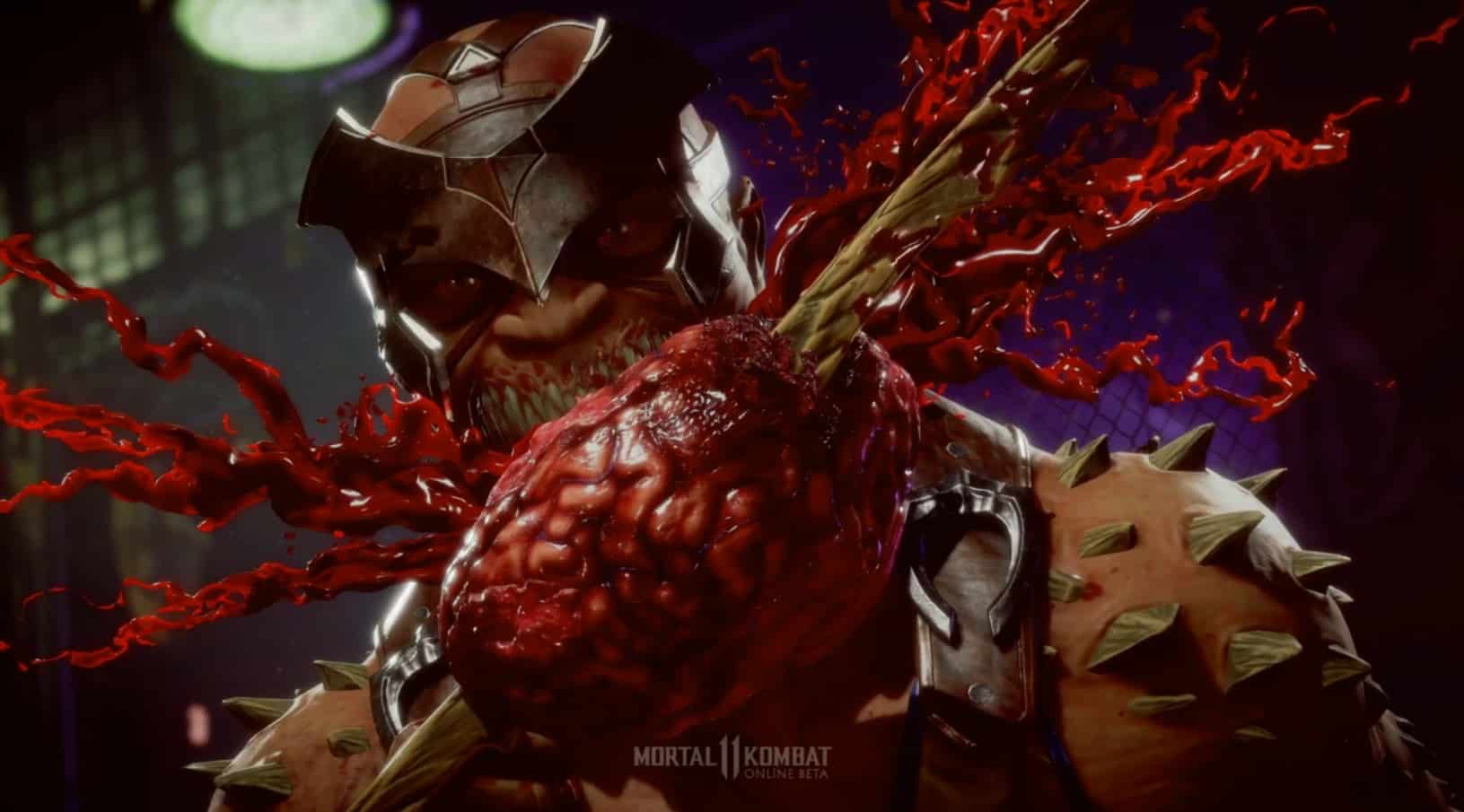 Using the environment in each level can also result in some brutal attacks, for example knocking someone’s teeth out on a broken-down car, or you can always use the environment to escape from a sticky situation.

Picking up a chainsaw and cutting through my opponent’s guts felt so good and all I needed to do was press R1 on the PS4 while standing on the right spot in the environment. 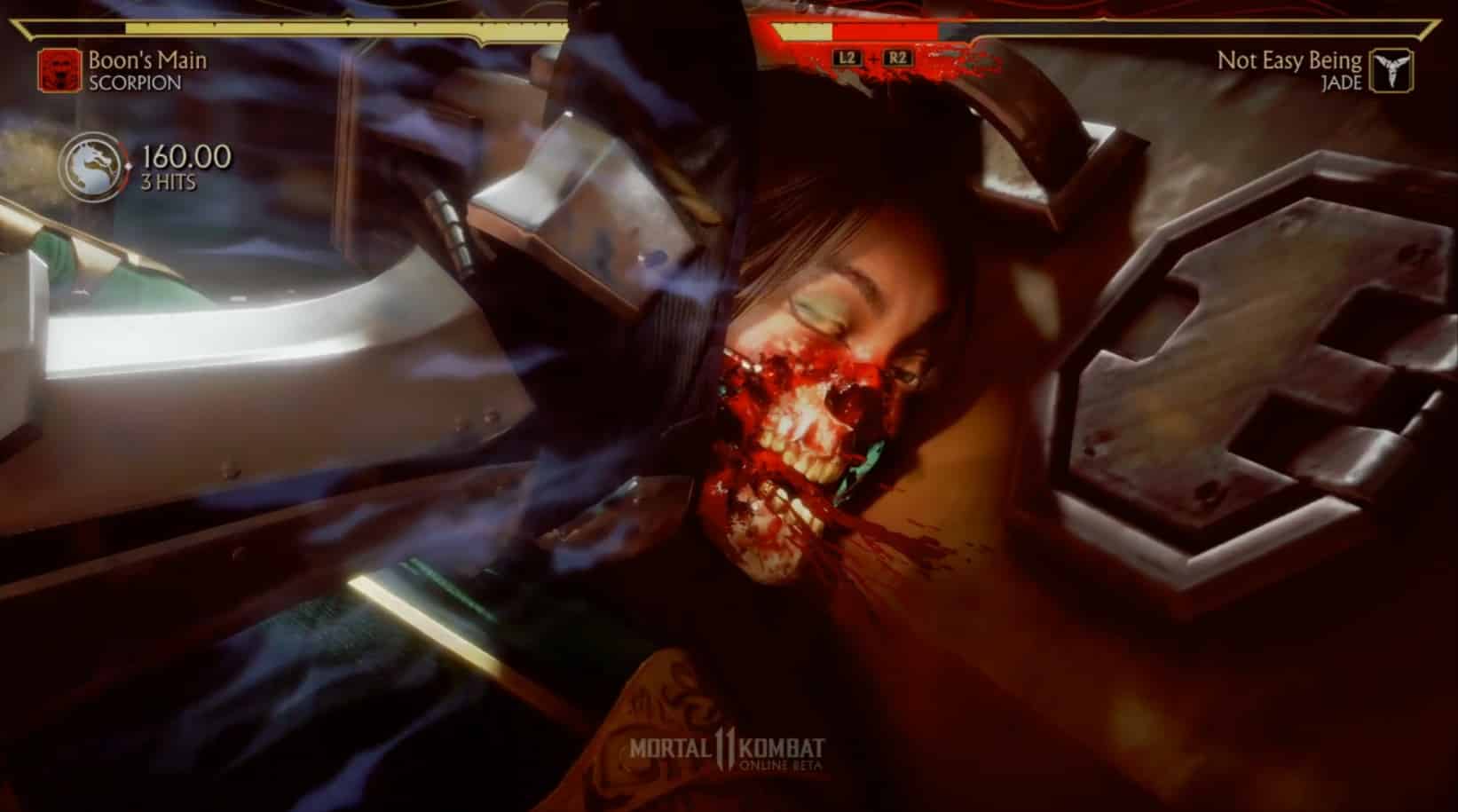 Then, there’s the Fatal Blows, a mechanic that you can use when your kombatant drops to low health. This helped me get back into a fight that was surely lost, destroying a large amount of the enemy’s health by pressing two buttons together at the right time and place.

The Fatal Blows do feel a bit overpowered at times but we could only use it once per match, so there’s that. These will surely help newcomers feel as if they are doing something and not just getting wrecked, which is nice. 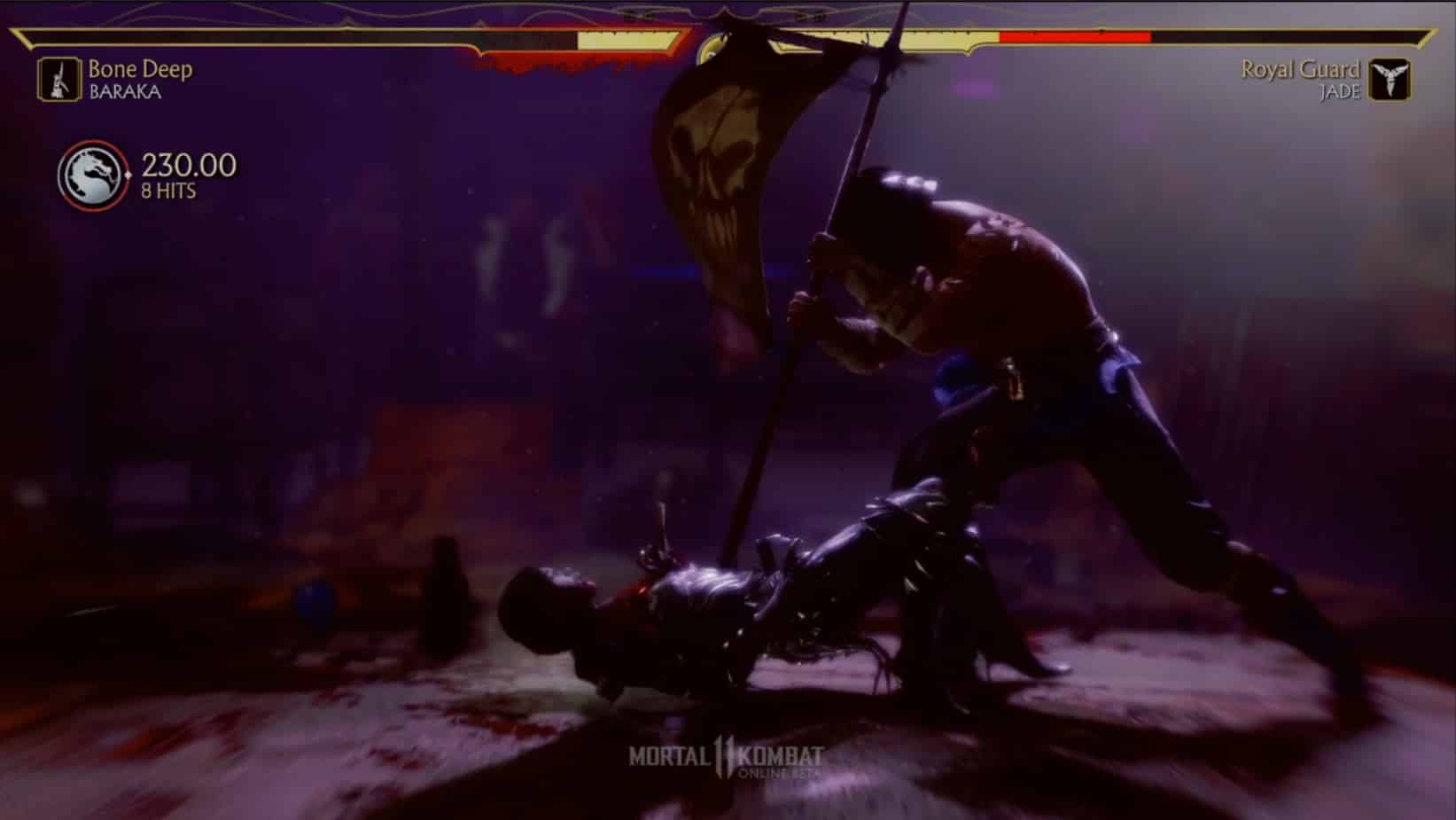 There’s just so much to take in and learn in Mortal Kombat 11 but that didn’t stop the developers from throwing in a tonne of cosmetic customization options for each Kombatant as well. Then, there are variants of each fighter with unique abilities, for example Baraka using a flag pole with special moves, or Scorpion doing a flaming breath attack. 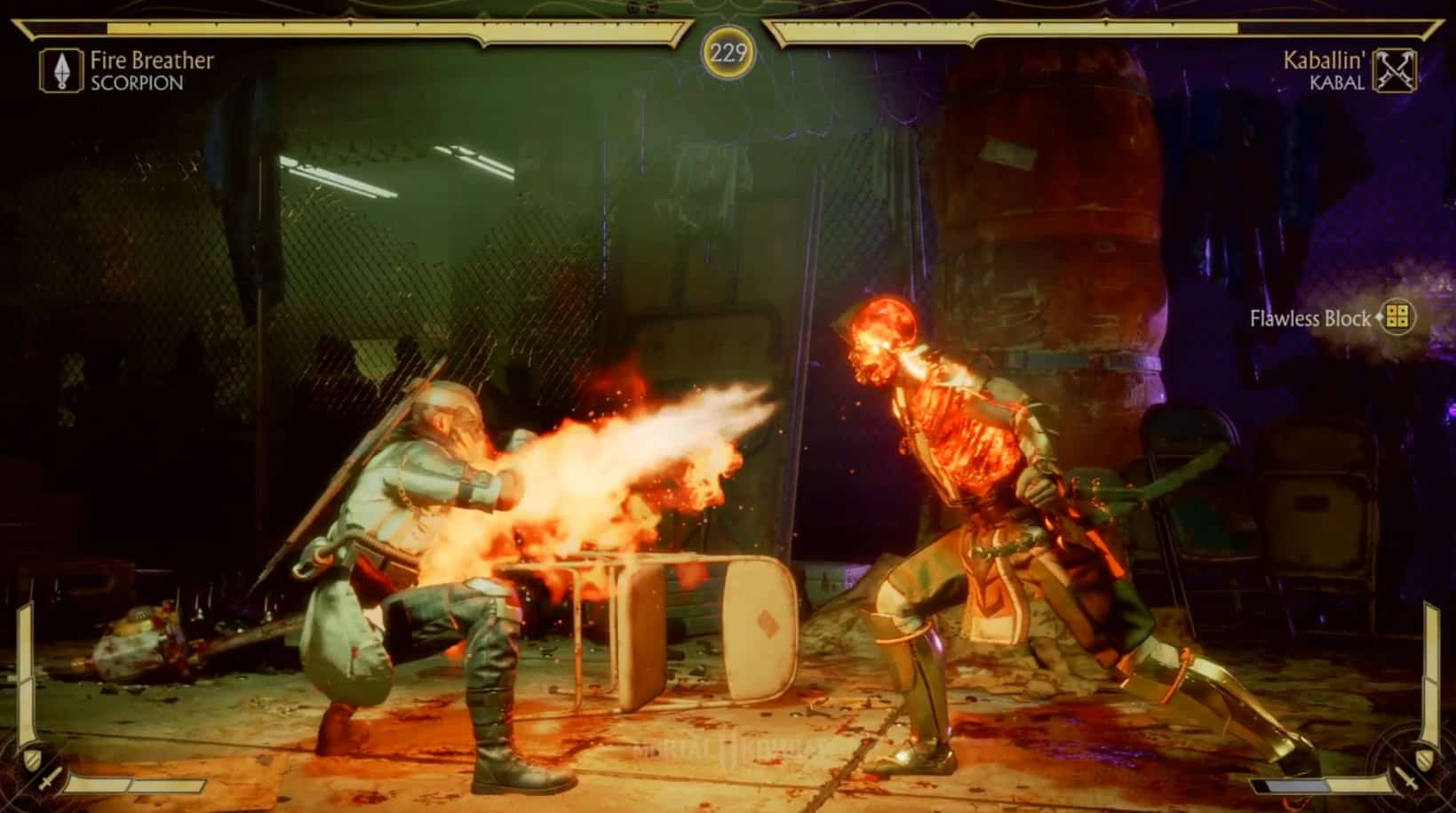 The beta didn’t allow me to unlock any content with currency earned from playing as everything for the five kombatants was already unlocked. With so many customization options, from abilities to cosmetics available, you can customize each character and hone them into perfect fighting machines that fit your playstyle.

Even with just five kombatants available, the gameplay just never got old. Performing devastating combos and watching the blood fly. Figuring out new ways to decimate your opponents, dodge grabs, throw some poor soul around and much more just stays entertaining throughout, no matter how many times you have done it before. 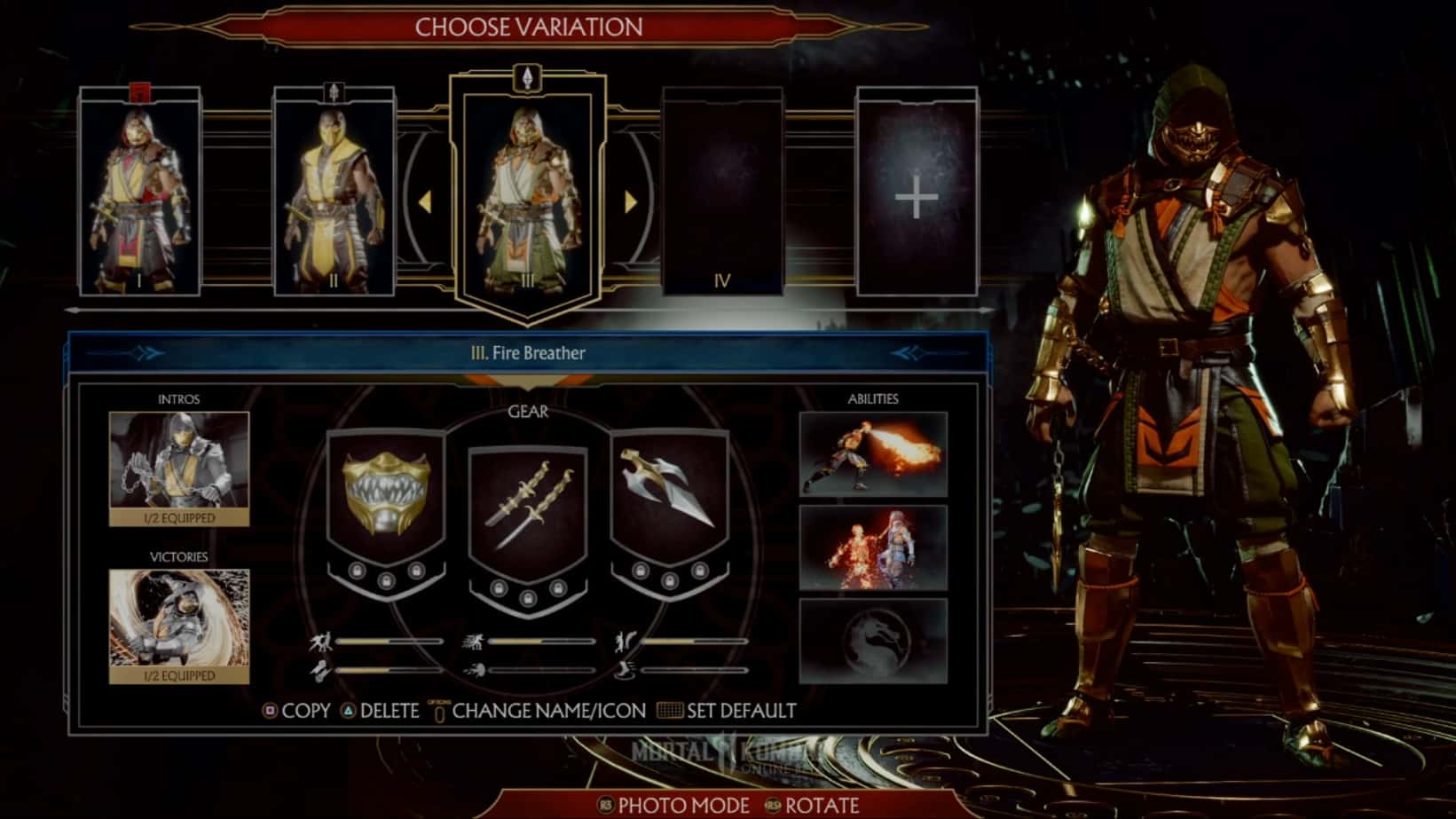 The gameplay exceptionally smooth while fighting AI opponents but when it came to multiplayer from South Africa, things didn’t always work so well. Finding a match just to have it end in the first few moments was an issue and when I did get to play a complete match, latency was a bit noticeable. 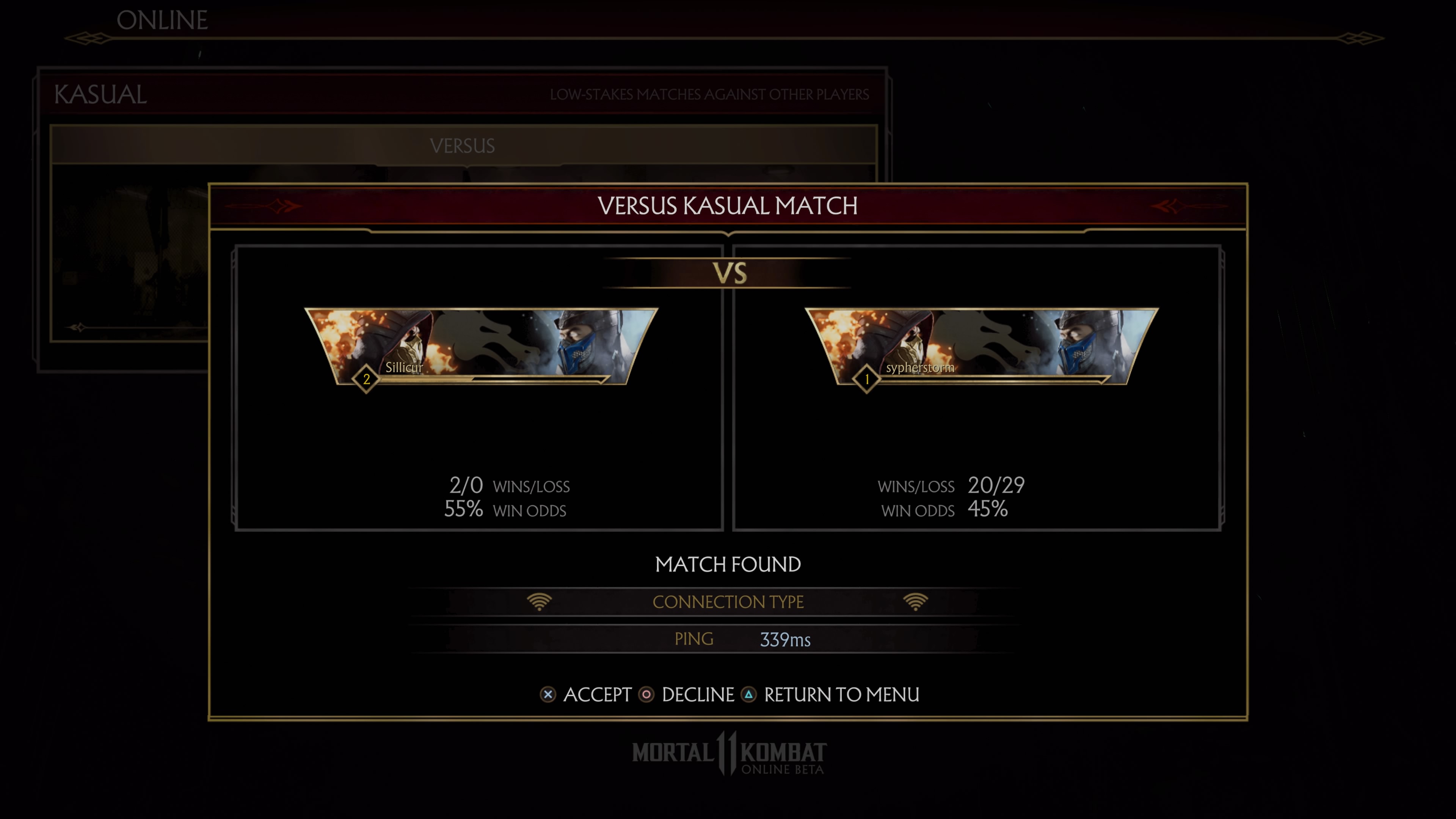 For the most part, it was playable, but random slowdowns do occur and it is nearly impossible to pull off a bunch of complex special moves, including fatalities, with relatively high latency. Most of the time matches I found clocked in at roughly 200 to 300ms latency, which made things tough.

All things considered, this was a beta experience and latency could very well get better when the full game launches. Keep in mind that servers could have also been under a bit of stress during the time I was working on this Mortal Kombat 11 beta preview, so things might be better at launch or for those with a different type of internet connection. 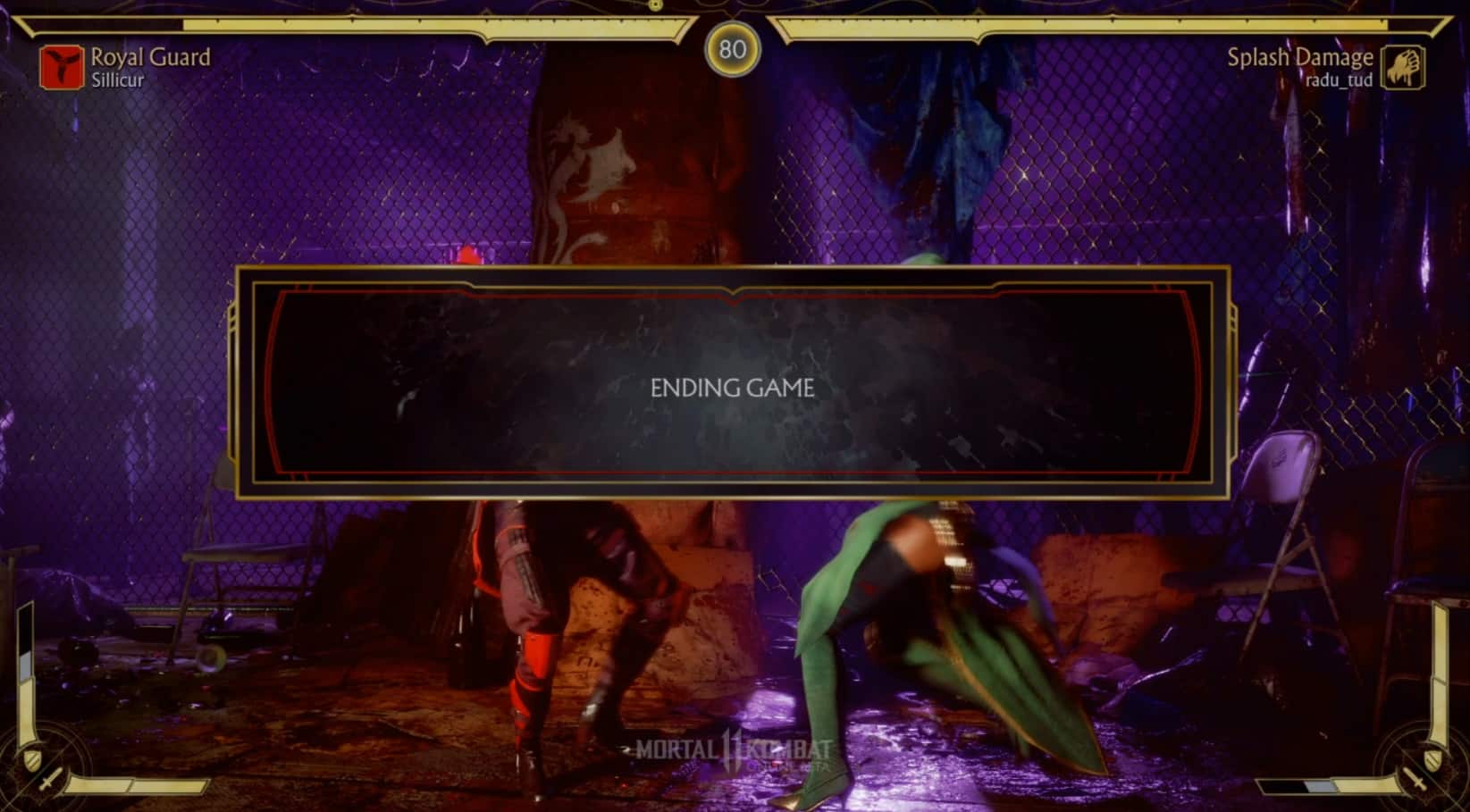 Even with the multiplayer issues, Mortal Kombat 11’s beta shows bloody, action-packed promise from the levels and kombatants we have experienced so far. If the full game and roster is anything like that of the beta in terms of quality, Mortal Kombat 11 should be a no-brainer for every fighting game fan out there.

Mortal Kombat 11 will be available beginning April 23 for PlayStation 4, Xbox One and PC. Nintendo Switch version will launch on 17 May 2019. We will be bringing you our full review and verdict in April. If I had to give the game a score from my Mortal Kombat 11 beta preview right now, it would be a solid 9/10. Considering that the beta was very limited, that speaks volumes already and I, for one, can’t wait to see the full game in action.

Sillicur
PrevPreviousThe Elder Scrolls Blades is in Early Access: How to Get it
NextThe District 9 Board Game will Let you Experience the Final Days from the South African-Focused MovieNext