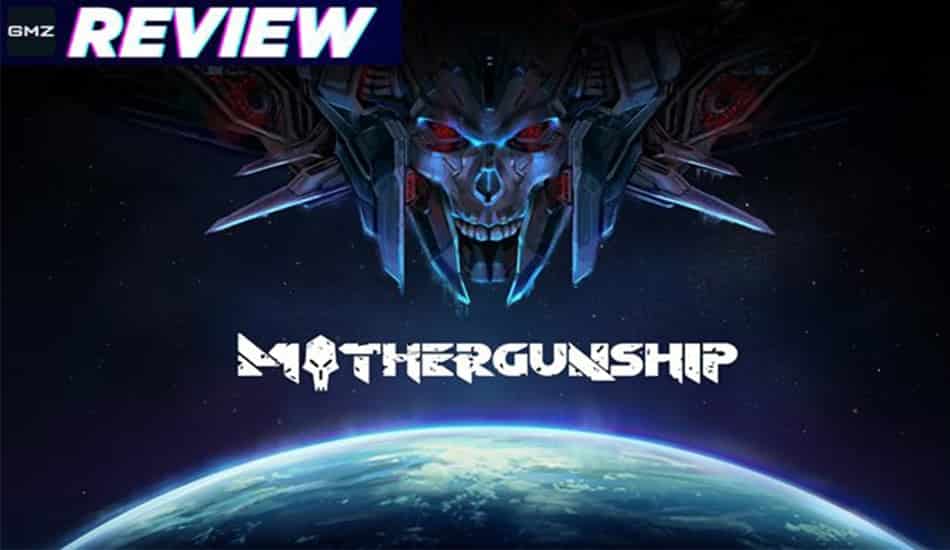 MotherGunShip is a bullet-hell, roguelike FPS title and it is also the first FPS game I’ve ever experienced on a console that reminds me of games like Quake and Unreal with its fast-paced, intense movement and combat. If you love big guns, hundreds of enemies and billions of bullets flying at you, then MotherGunShip has it all in droves. Not to mention the whole point of the game is to build bigger and better guns, which makes the experience resoundingly fun to play, but there is a bit more to MotherGunShip than meets the eye.

The Mother of all Resistances

I’ve never said this before about a roguelike, bullet-hell game, but the story and characters in MotherGunShip are some of my favourite aspects of the game. To summarize, you are a member of the Resistance and a massive alien armada, led by what the resistance calls the “MotherGunShip”, is holding earth hostage.

As you progress throughout the story missions, you get to hear all the humorous banter from resistance members over a communications device, including AI characters and what sounds like the Resistance’s sponsor, Joe’s Arms and Armory ads coming through every now and then. Right from the start, it is clear that the game’s story isn’t a serious affair, but it is these ridiculous things that happen that made me want to progress and see what happens next. 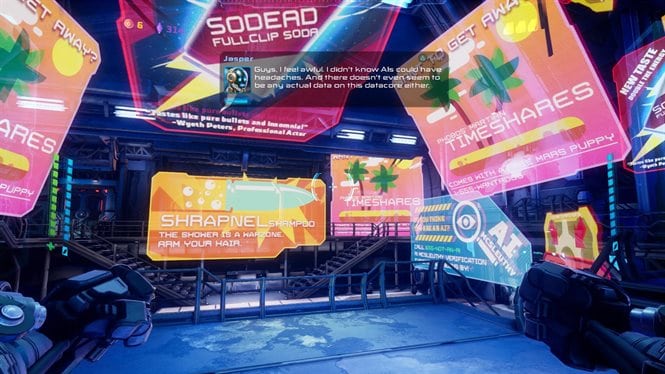 For example, close to the start of the game you get a DataCore from an alien ship, which is given to the AI of the Resistance ship to analyse. Unfortunately, the data core is filled with malware and you see your AI battling with ads popping up everywhere. Another cool example is when the MotherGunShip is tricked into thinking you are the pizza delivery guy, which means you can walk straight up to the self-destruct button.

Yes, each ship has a self-destruct button at the end, because aliens whose goal is to archive the whole universe can’t figure out that they shouldn’t put a big red button in their ship that can destroy the whole thing. Further, the whole alien invasion and how these Archivists plan to catalogue the whole galaxy feels like not-so-subtle nods at Destiny and Halo.

Everything, including the music and dialogue, feels like a mashup of some other games in a way, but that’s part of what made the story so fun and kept me smiling all the way through, even while dying terribly against hordes of enemies, some of which look very much like the Vex from Destiny 2. 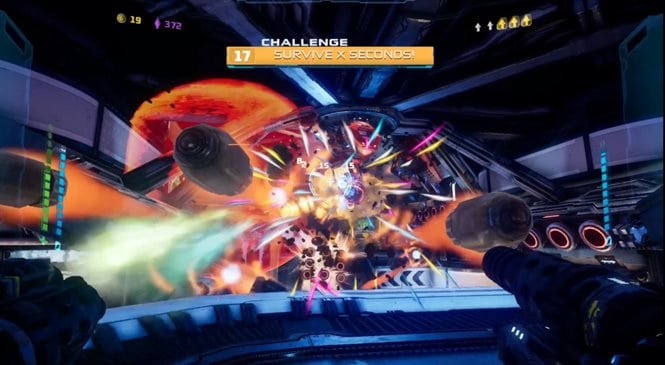 Just like in every other roguelike game out there, death is a constant experience as you slowly progress towards your next goal. In MotherGunShip, I probably died once every six minutes on average, especially when I was still getting to grips with the fast-paced combat using a controller. Admittedly, I’m terrible at aiming in an FPS game on a console, so for me, the experience was brutally challenging.

The general gameplay loop sees you pick some starting gun parts (generally not a lot, sometimes even just one part) and head into a stage. As you progress through multiple levels, things get tougher and tougher until you eventually get to the end or die trying. 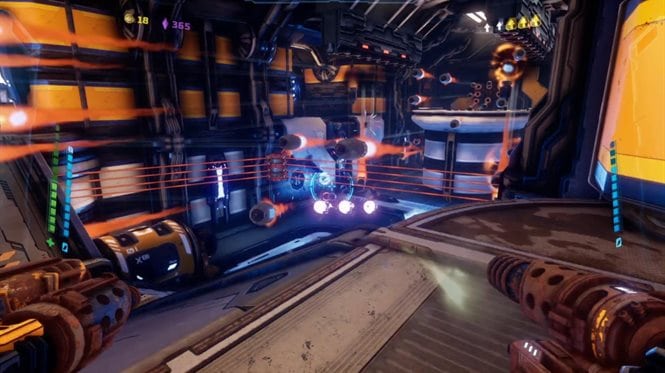 If you don’t make it through the entire stage, you lose the gun parts you took with you, as well as everything except for coin currency and experience shards you acquired.

At one point, I was completely out of guns and took on some random, easy levels first to get some points, then return to the main mission to give it another go. Thankfully, you do get a bit stronger with every stage run as you can level up your suit with multiple perks, for example, extra health, energy recharge rate and much more.

My favourite of these perks is the secret detection one, as you can find several secrets in each stage, which give much-needed boosts that saved me more times than I would like to admit. Sure, there is quite a big gameplay loop but thankfully the actual gunplay and movement feel fantastic. You start off with a triple jump but can upgrade this quite a bit, or pick up power-ups throughout a stage to further increase your jumping ability. At once stage, I had over 30 jumps and I was effectively flying through the map. Movement is such an important part of the game and you can even just skip past certain levels by moving quickly and dodging bullets. Throw a tonne of jump-pads into the mix and you have a recipe for success.

As for the gunplay, each type of gun barrel feels unique, has their own type of projectile dip and some even have serious pushback. Basically, the gunplay in MotherGunShip can stand toe to toe with any top-tier FPS title out there. I did experience a few minor bugs, for example, mechanical dog-like enemies got stuck in a few corners and walls, or simply didn’t attack me. Another issue is that loading each level of a stage feels quite long on my PS4 Pro and considering how small most of many of these levels are, I didn’t think that would be the case.

Levels also start to feel like the same thing over and over again after a while but I guess that’s just the nature of these types of games. There are some challenge rooms that took me by surprise, for example, where suddenly I had to not use my left hand for 60 seconds. This adds some flavour into the mix and kept things fresh for a bit longer, but let’s face it, MotherGunShip is all about the guns. Creating your awesome guns to fight off the hordes of aliens with is as easy as shopping at Joe’s Arms and Armory, your one stop shop for any weapon you might desire (sorry I just had to). You assemble some awesome weapons, all with different rates of fire, projectile dips and much more with ease. Weapon parts have three categories, namely Sockets, Barrels and Caps, while you obviously need to have the barrel(s) of the gun facing forward, other knowledge isn’t really needed to create some BFGs. You can also remove parts and break the guns down, creating new and more powerful weaponry.

Losing a big gun can be a controller-throwing experience, but thankfully, you can also purchase some gun parts from a vendor on your ship later into the game, but higher rarities of guns cost a small fortune. The only thing truly disliked about the whole gun part collecting and assembling loop was that you can only have 100 gun parts in your stash, so after a stage when your inventory is full, you have to painstakingly go through a list of all your parts and select those you want to get rid of.

MotherGunShip isn’t perfect, but the developer is continuously improving the game and has already released a co-op patch so a buddy can tag along in this glorious bullet-hell. Further, the game offers quite a lot to keep you going with an endless mode boasting a challenge that just keeps going and going until you inevitably die.

MotherGunShip feels amazing to play as its fast-paced gameplay is like nothing I have experienced on a console before. The story is also great due to the humorous banter between Resistance members and even the MotherGunShip herself. Building your own weapons of mass pawnage and levelling up your suit does a great job of keeping the game interesting.

However, MotherGunShip isn’t for everyone and if you don’t feel comfortable dying hundreds of times, then this game might not be for you. Further, I did experience some issues with enemies getting stuck and after a while, it feels as if the levels in each stage get repeated quite often. In the end, the game is super-fun and anyone who loves the roguelike genre or is just up for a challenging FPS shouldn’t miss out on MotherGunShip, especially for the relatively low asking price.

This review was conducted off a review code provided to us by Digital Grip.