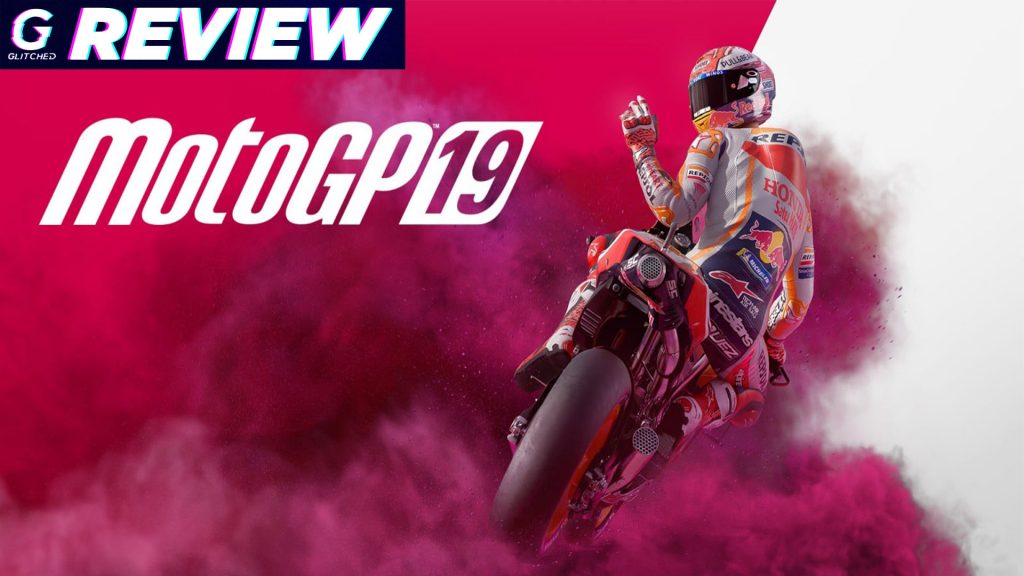 Nearly every year since 2008, the motorcycle Grand Prix video game franchise, MotoGP, gets a new entry and this year is no different with MotoGP 19, the official video game for MotoGP fans out there. At first glance, it is clear that developer and publisher Milestone did up their game to a podium position, with some fantastic new additions and improvements for this year’s entry, but it is still very much a game just for those hardcore MotoGP fans.

MotoGP 19 has a lot going for it in terms of a single-player experience, from various career modes starting with the ed Bull MotoGP Rookies Cup to the Pro Career MotoGP mode where you need to be a veteran to compete in it and take home some wins. However, these career modes do not contain flashy cinematics or a real story, so your only goal here is to win every race you can. Then, the game also has a tonne of Historical Challenges to complete, which was one of my favourite modes to challenge myself in.

The Historical Challenges range from 500cc Heroes to the Modern Era of the MotoGP and will push you to your limits in, you guessed it, historic moments of the motorsport with over 50 historic riders to unlock and three additional tracks. One of the first Historic Challenges I undertook was called “Rossi nullifies Biaggi’s threat” and that should maybe give some MotoGP fans chills, as it revolves around the 2001 rivalry between the famous Valentino Rossi and Max Biaggi. 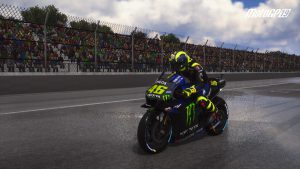 It goes without saying that the game has a tonne of detail, moments, riders and tracks for fans of the MotoGP to sink their teeth into. You’ve got 19 tracks (not including the historical tracks) and each of them have been faithfully recreated to the point where every single turn is named, from the Red Bull Ring in Spielberg, Austria to the Circuito de Jerez in Spain and many more.

You’ve got all the professional teams and you can even talk to engineers to adjust things on your tyres after doing practice laps over a weekend of riding before a main race, and you can even earn some points to increase your bike’s performance by working on the engine and chassis. 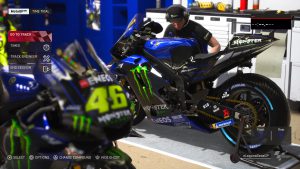 There’s just so much detail and so much to do that MotoGP 19 is no doubt the most robust MotoGP package to date, but does all the improvements really pay off and how does it feel to actually play the game.

Since I am not a massive fan, many of these awesome details were a bit lost on me, but I can definitely appreciate the effort put in. Handling and physics feel extremely realistic, especially when competing against tougher opponents, but there is no real arcade mode just to have fun in. Even if you turn all the assistants on, races felt like they required extreme concentration and focus around every single lap. 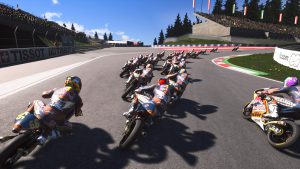 The game also boasts “Neutral AI” for the riders and is said to be flexible and reactive to the player. In my experience, the AI is much better than past MotoGP entries and, in fact, most racing games.

However, there are some weird issues that I experienced. From the AI sometimes just riding into me causing a crash for no reason at all, to an instance in the screenshot below captured from the replay feature that I managed to recreate twice on a wet lap. 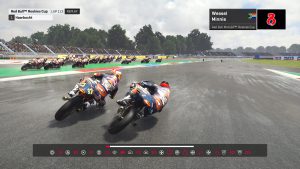 Apart from the strange AI behaviour at times, the game does technically look great, but not fantastic. The motorcycles, of course, have a tonne of detail but there is a lack of detail to character faces and the tracks, as well as skyboxes, don’t look great either. Then, there’s texture pop-ins which I experienced and this was especially noticeable when it came to crowds of people in the stands.

Lastly, although the game does support HDR and ran smoothly on my PS4 Pro, the HDR really didn’t look all that great and if MotoGP 19 didn’t ask me to adjust the nits when I first started up it up, I would have never thought the game featured HDR. 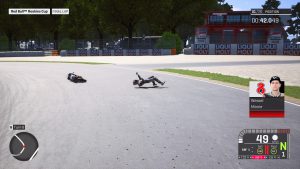 What’s most important, in my opinion, is how the game handles and it does handle well. With each bike and each small adjustment, I did feel a difference and that is just brilliant.

The assistant for new players really helped me get the hang of each track and bend, when to slow down and when to push on that throttle. It can take dozens of hours to master but the result is satisfying. After a while, the races do get a bit monotonous and dare I say it, boring. 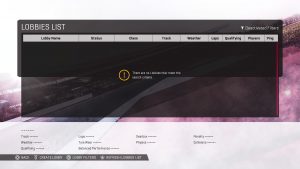 That’s where the multiplayer aspect of the game needs to come in as playing against others would definitely amp up the excitement. Unfortunately, I simply can not report on this as during my review period prior to the game’s launch, I could find absolutely no matches after several hours of trying. 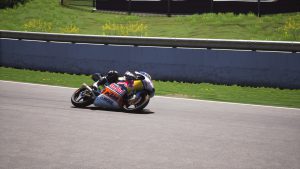 Lastly, there’s the MotoGP eSports Championship that has yet to start as well so I wasn’t able to test out my skills against the times of others.

MotoGP 19 does deliver a robust package with various career modes and it even caters to the newbie riders such as myself with detailed difficulty settings and championships to enter. Historical Challenges sometimes even made me excited about watching some real MotoGP, but there are a few issues. Texture pop-ins are noticeable, the “neural AI” does bug out from time to time and it feels like I was still invisible to the AI when racing. However, the biggest issue is that for anyone who isn’t a massive fan, many of these improvements might not matter. Further, and most importantly for me, the racing just felt monotonous and boring after less than a dozen hours.

MotoGP 19 does have some great improvements over last year’s entry but is it enough to fork out over R1000 for? Well, for anyone but the most hardcore of MotoGP fans, I am not so sure. Yes, the game is okay and it does offer a lot to do. Keep in mind that I also couldn’t check out the multiplayer as no matches were available. Therefore, for the single-player experience, MotoGP 19 doesn’t do too bad at all.

This review was based on a code sent to us by Milestone.