Moving Out could be one of the most frantic and exciting co-op games I have played in a very long time. It is impossible to master, requires some heavy teamwork and delivers an overall good time. In a nutshell, the game is all about moving things around. Be it out of a house into a moving van or carrying a couch across a deadly turning conveyer belt. You are a moving company and you need to move… stuff. With that being said, Moving Out is a single-player and couch co-op game. It features zero online support which was, in my opinion, a major letdown. However, thanks to the PS4’s SharePlay feature, I was able to play with a friend in the UK.

Moving Out may sound simple but it is far from it. The game’s emphasis on teamwork, coordinated actions and tricky level layout makes the experience tough as nails. You start off small with a little four-room house and twenty-something objects to pack away. Before I knew it, I was carrying massive ten-seater couches down a snowy slope; tossing fragile objects out the window for my brother to catch and breaking everything at the same time. It is chaotic, to say the least.

The magic of Moving Out is in how it all feels throughout the game. Think about moving a chair out of your house. While it may sound simple, your body can only move in a certain way in coordination with your carry partner. Keep in mind that objects are sturdy and don’t bend, bash on door frames and cannot be carried alone. With that being said, you could totally push a couch across a room, but carrying it downstairs is impossible. These same real-life restrictions are all implemented into Moving Out in the best way possible. For example, carrying a table out of the room meant working together to swing it in the right direction. This also required knowing which person would be at the back and how the object would act as we moved about the level. 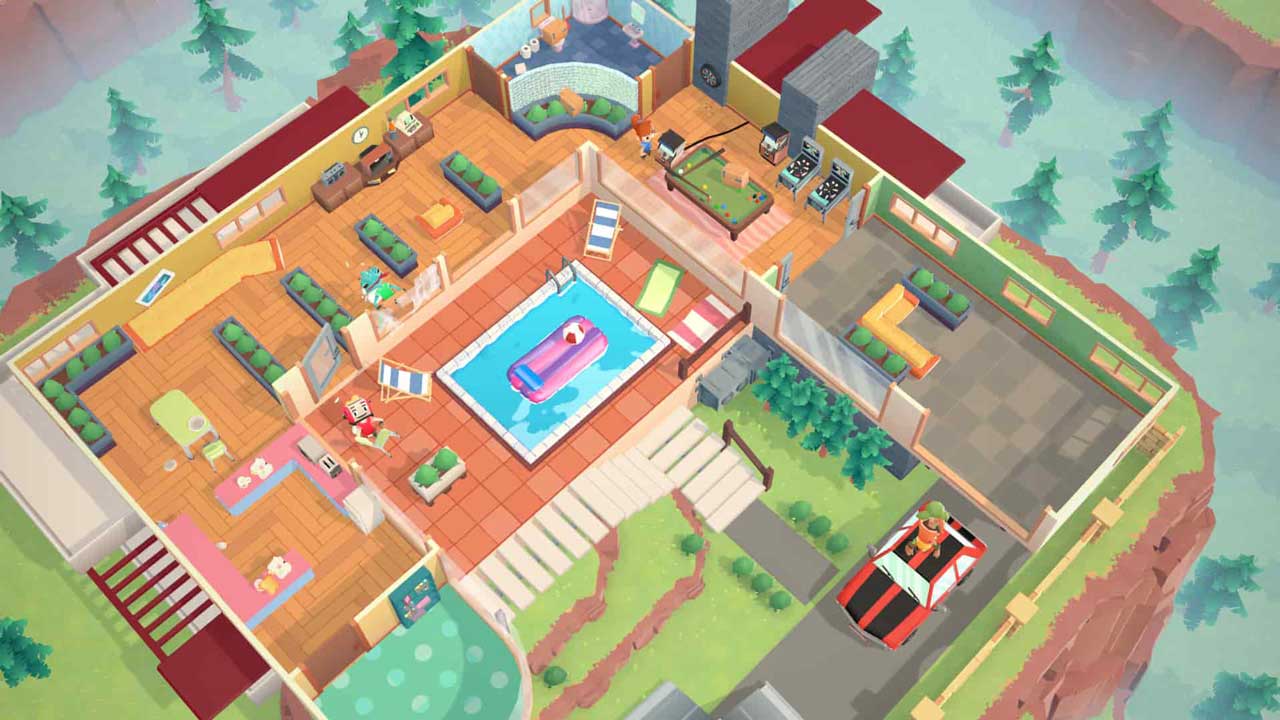 To say Moving Out is stressful is an understatement. Certain objects only move with two people while smaller objects can be carried alone. My team had to coordinate everything. Who was moving what object alone while the two of us pulled the L-shaped couch out of the door? Every level has been carefully designed to make the best use of the game’s challenging mechanics. Objects lying in the way made sure we tripped over them. Crazy animals attacked us during certain levels and side objectives kept us watching for what we were breaking.

Every level has a specific time objective to beat. You get a gold ranking if you beat the best time, silver and bronze etc. Once completed, the game unlocks side missions in the stage which you can complete for coins. These coins are then used to unlock mini-game stages and other arcade levels. 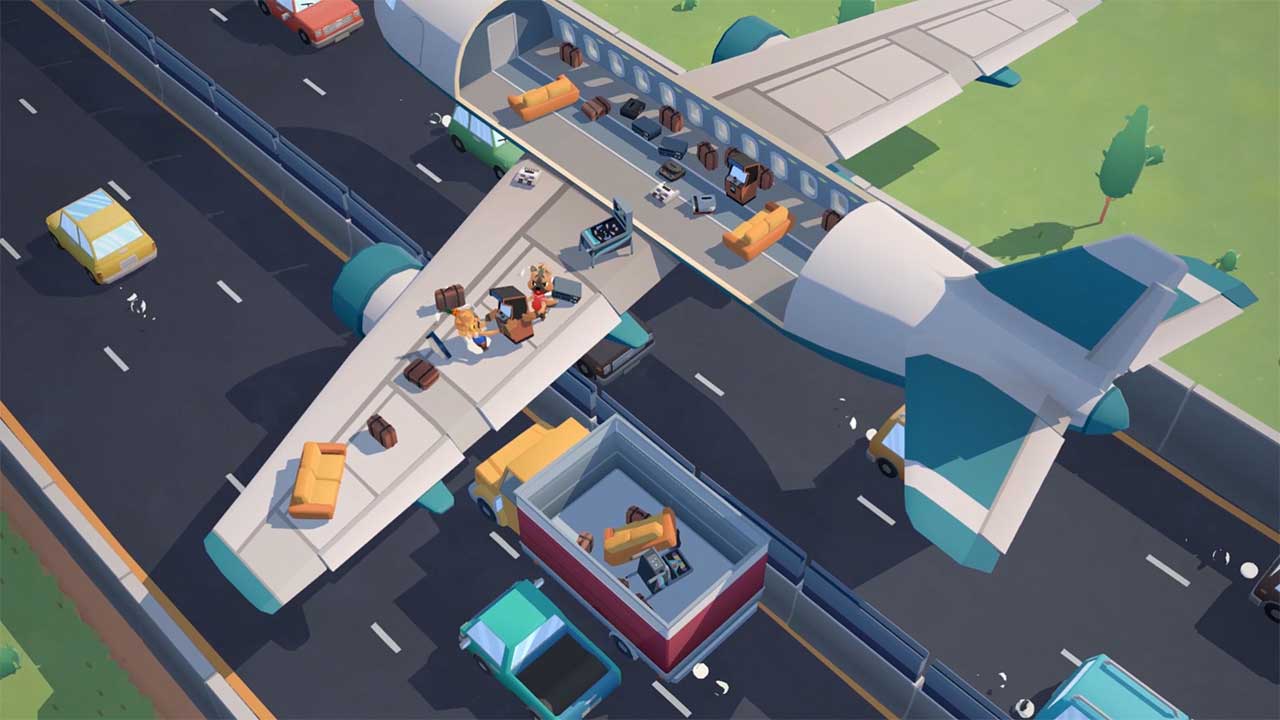 The entire experience is fun but it brings out the worst of you. It started off calm but soon after I was screaming at people who refused to follow instructions. Punching my brother’s arm when he didn’t push the damn couch in the right direction, and rage quitting when we tossed the bed out the window wrong. You see, there are so many factors you need to consider in every stage.

The moving truck needs to fit everything perfectly while you all chaotically run around moving things and packing it. With the rush, you forget these things. In conclusion, causing chaos at the same time. Not to mention the tossing which is fun and a disaster. When holding an object with a partner you can swing and toss it. This helps when tossing onto a truck or even out the window. Often, one wrong toss messed the truck up or worse, threw the object in the wrong direction. We spent time fixing this and time is everything in the game.

It is NOT my Fault!

Of course, poking the blame at your partner is always easier because most of the time it feels like their fault. However, if you sit back and understand the laws of physics, it makes sense. Like I said before, the human body can only move in a specific way while carrying massive couches out of a room. But in the heat of the moment, you don’t think about this. Instead, shouting and pointing blame is a lot easier. 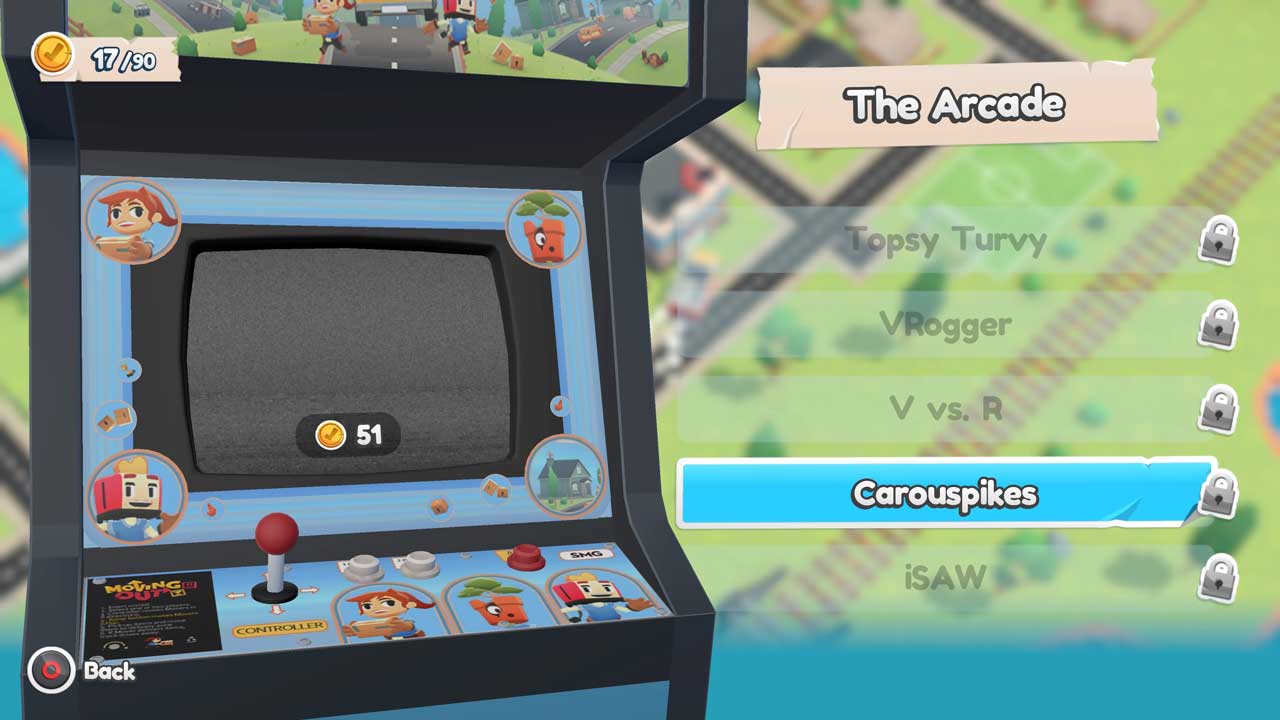 For every tough moment where I wanted to slam someone’s head through my TV, the game delivered equally as enjoyable ones too. This is thanks to the clever level design and charm it delivers throughout the experience. Crazy levels like one where we had to move a couch across a thin pathway created absolute chaos. Often, one of us would fall off and dangle on the outside of the ledge while we all tried to pull each other up. It was insane and left me breathless from laughter as I tried to see the TV through my watering eyes. I don’t know how we did it, but we managed to get across the spiral level.

While the game features some insane and enjoyable moments, it often falters on the main game scenario. Later on in the game, levels get bigger, timers get shorter and there are dozens of objects you need to put into the van in time. After failing to achieve gold the first time, redoing it often felt like a chore. The game progression relies on you completing these to the best ranking possible and unlocking the extra stages using the coins you obtain. However, the process gets a little sluggish due to the level sizes and sheer difficulty.

The side missions, like the couch one is the best way to spend your time. The same goes for the other mini-games. However, the chore to get to that point is often a lot of work and painful. At least you can slap your friends in-game which makes it a little easier on the stress levels.

Moving Out is a fantastic co-op game. Sure it may feel tedious at times but the great level design and opportunity to unlock awesome mini-games made it worthwhile. I could not help but feel I would have enjoyed it more if the game was a bit more forgiving at times. Regardless, you are going to have a crazy time here and hate your friends and family afterwards.

This Moving Out review is based on a code sent to us by Team 17.