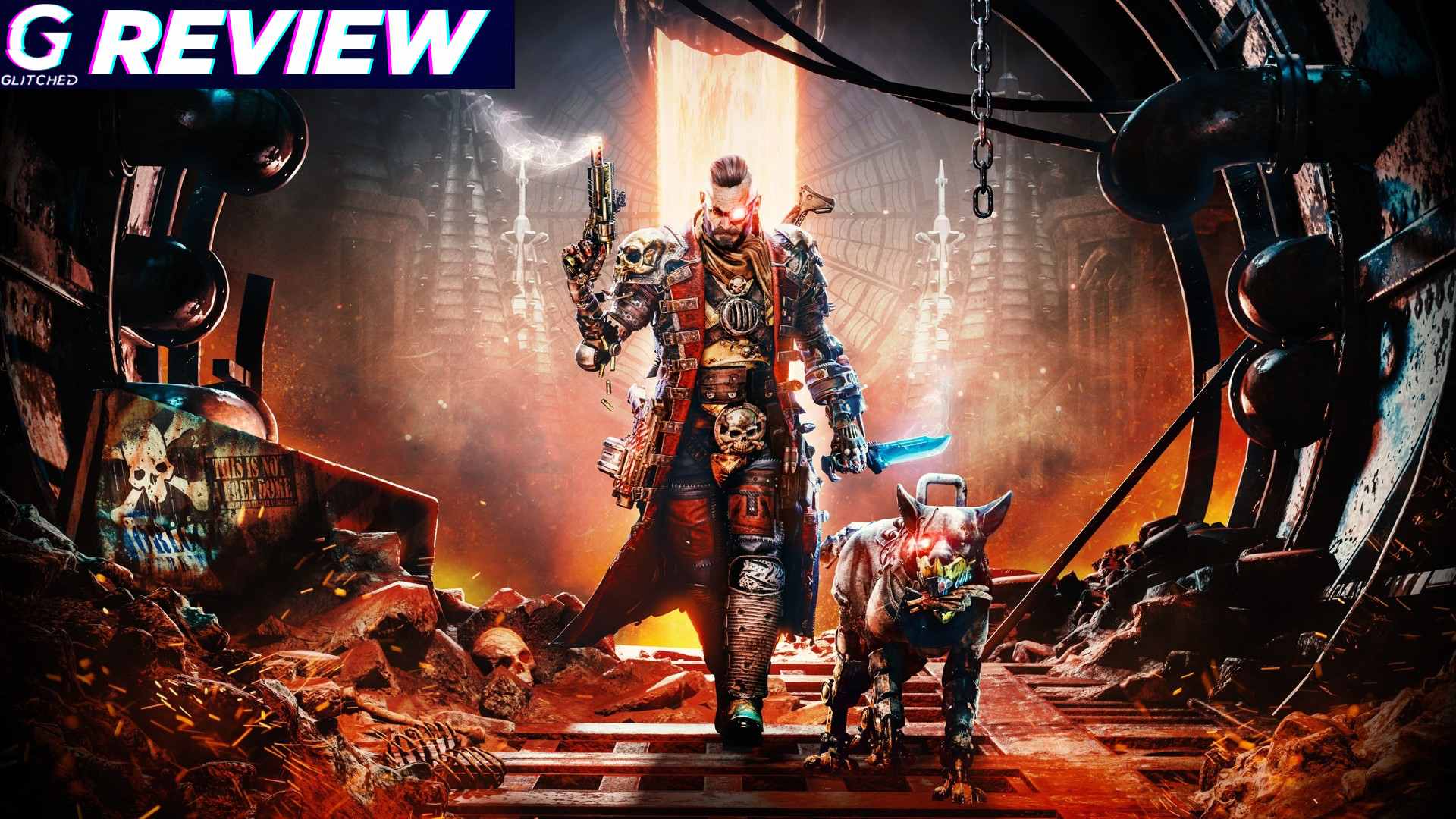 Necromunda: Hired Gun is set in the Warhammer universe. Now, we can go into detail about where the game takes place and how it dives into the various layers of lore that ooze from the popular tabletop game but it is not necessary. All you need to know is that you take on the role of a bounty hunter that explores a range of locations set at the bottom of Necromunda, the machine planet in the lore. Necromunda is known for its metal, weapons and deformed robots that walk the lands so it is only fitting that you will see a lot of factories and piles of scrap.

The game also borrows a lot of its gameplay inspiration from the likes of DOOM Eternal. This means the gunplay is fast-paced, enemies are always one step ahead of you and jumping and sprinting around the environment makes for a somewhat good time. It also runs like a dream thanks to a load of post-launch updates that have polished up the performance. 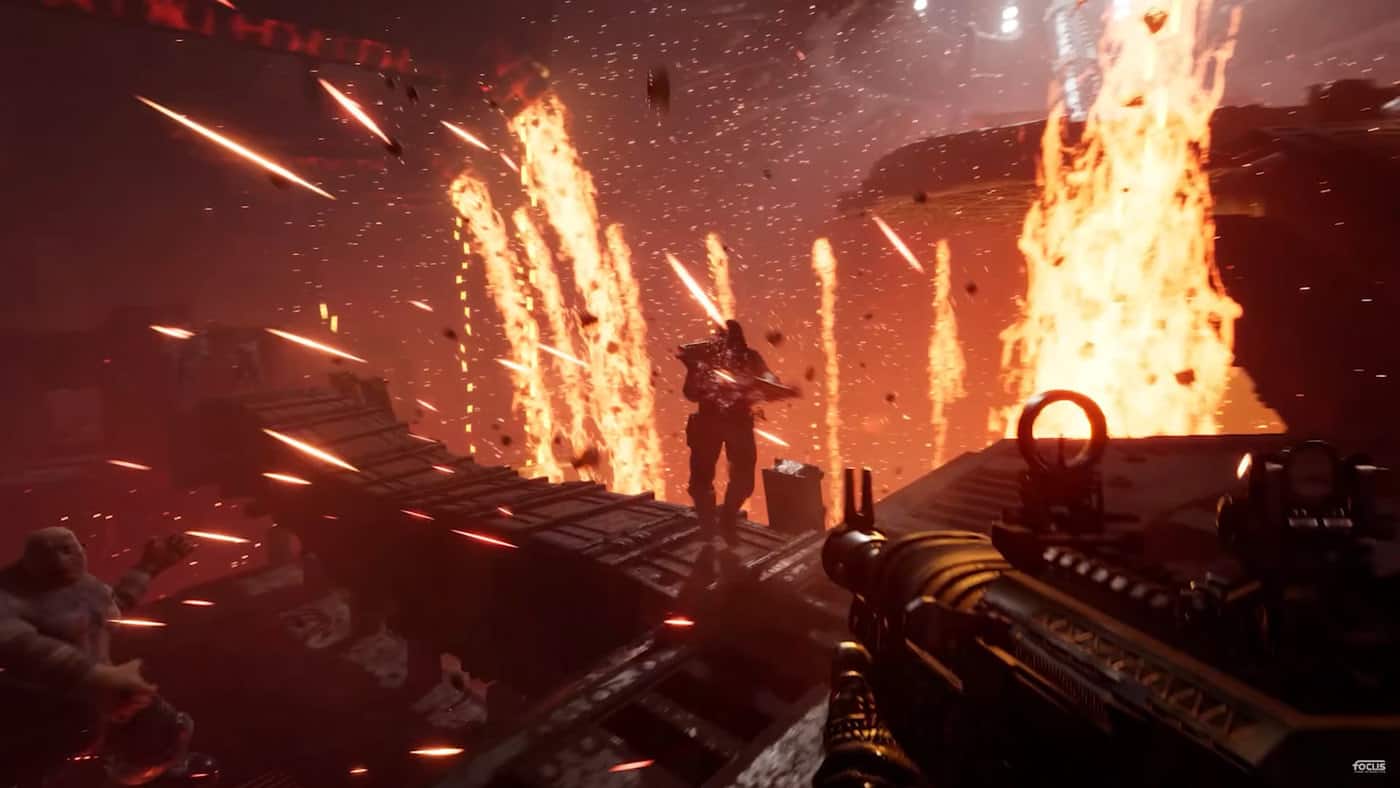 Still, Necromunda: Hired Gun does often borders more “clumsy” than enjoyable due to how uninspired its gameplay can be. DOOM excels in its gameplay due to its fantastic level design, smart enemy creations and weapon loadouts. Necromunda: Hired Gun feels like it just slaps a bunch of stuff together in hope of it working. Nothing is refined enough to work properly and the lack of enemy variety keeps things feeling one-note most of the time.

Being a bounty hunter in Necromunda: Hired Gun means killing people and I did a lot of that during my playthrough of the game. I also used a range of weapons to do so. This included shotguns, snipers, machine guns, pistols and more. I also used my fists and my companion dog that often chased down some fool and ripped his throat out. The sheer variety of weapons works well in Necromunda: Hired Gun and the better the guns, the better than chances of getting more powerful weapons. 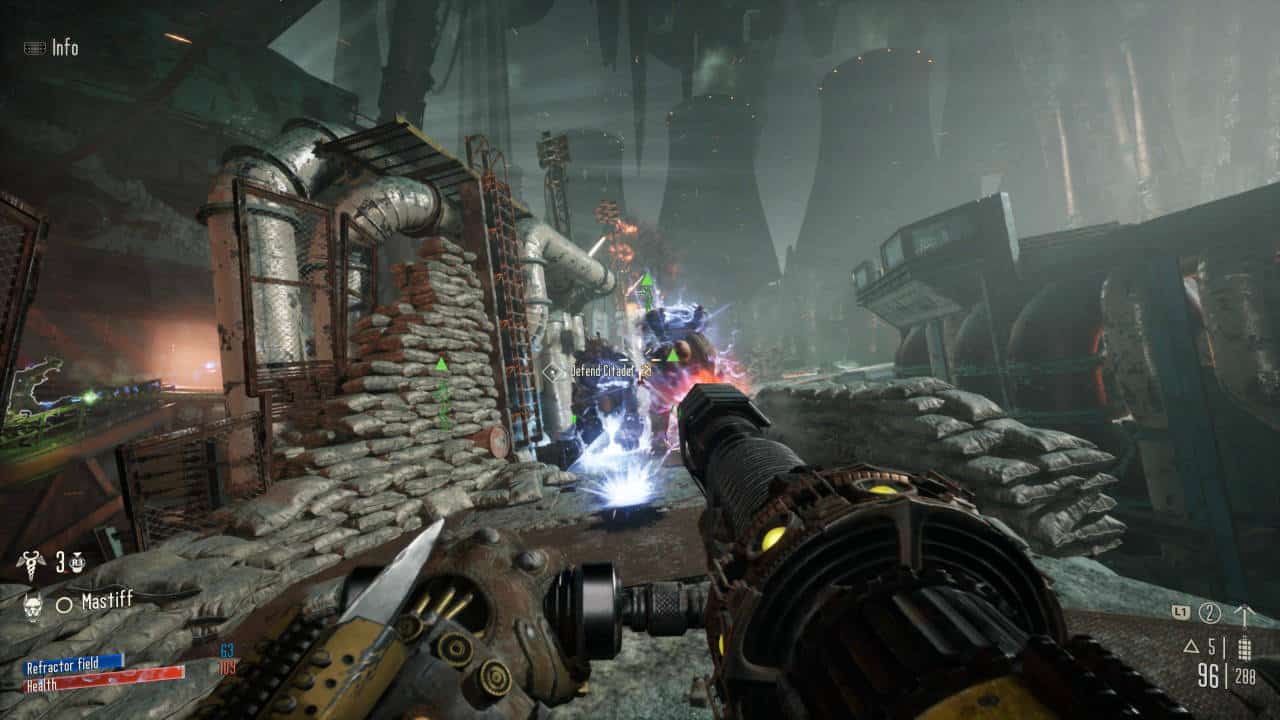 An average bounty hunt saw me pick up a mission from the board and head into a gorgeously designed level to hunt down my target. Along the way, I had to kill mobs of enemies and during the story missions, participate in side objectives too. For the most part, Necromunda: Hired Gun has some brilliant level design and attention to detail. I could not help but sit back in awe during some of these levels and take in the beauty around me. Be it running through junkyards or leaping across a massive building-sized train. There’s no shortage of imagination when it comes to the game’s level design.

Unfortunately, the level design, while being easy on the eyes, never compliments the gameplay. Stages lack cover, decent hiding places to snipe from and the areas often feel suited for an adventure game more than a fast-paced shooter. This forced me to be creative when it came to taking down my enemies. Let us just say that AI are terrible and have no brain at all. This means enemies just run around with no real focus path shooting things and getting in the way. They also have some terrible spawn points often popping up behind me. 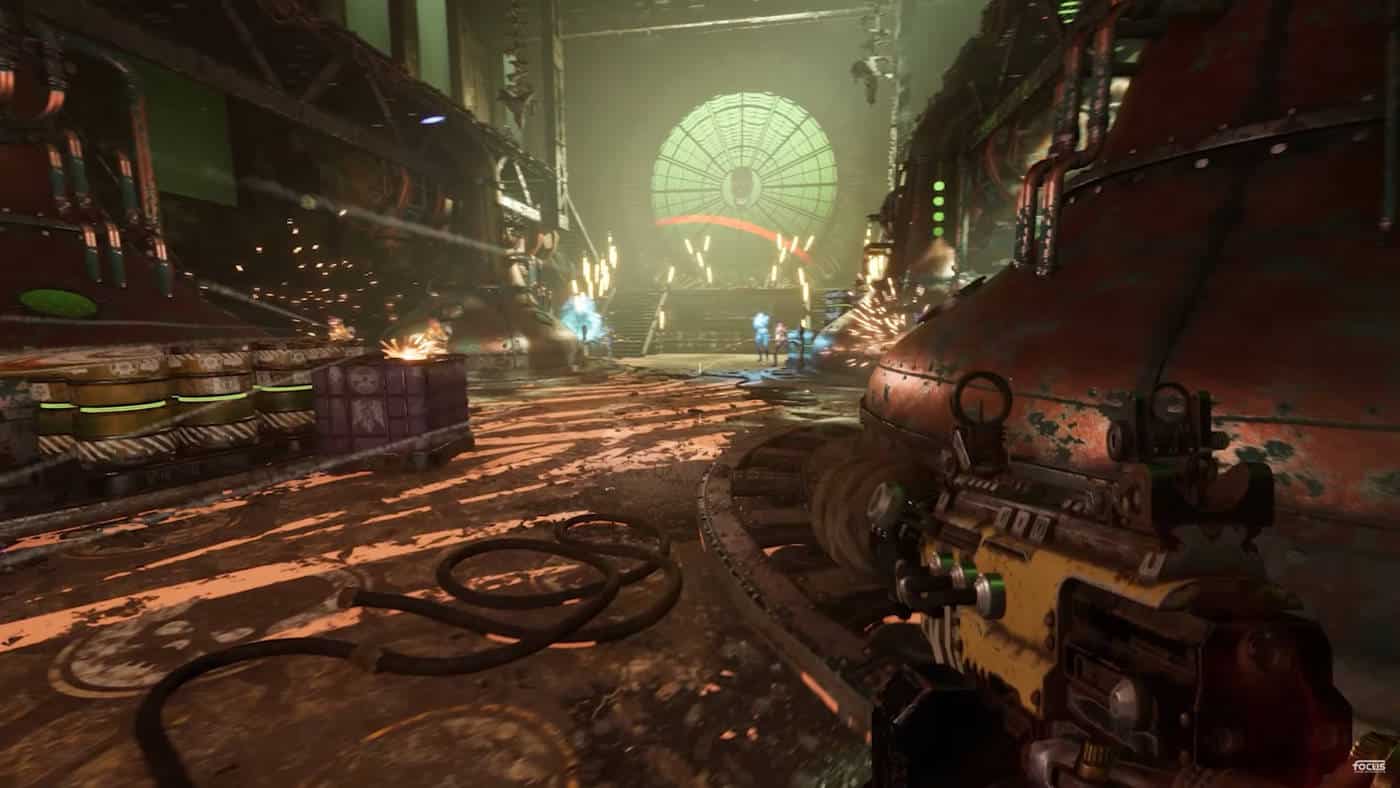 Thankfully, a dumb AI is easy to take advantage of so most of the time I just hid behind a box with my sights down a corridor and fired all my ammunition at the line of enemies walking down the same path to get me. Weapons do feel decent to use too and there is a great variety of them. Many of which fans of the 40K will recognize. However, after a while weapons kind of start to blend into one another and I picked up the same weapon with a slightly improved stat. What starts off as a promising loot and weapon system ended up being a shallow gun system with only a handful of weapons worth using in the long run.

Other abilities outside of the shooting include using the dog to take down some enemies. However, this is also a painful exercise and usually just shooting the guy in the head worked out faster than calling the dog with the chew toy, watching it spawn in and aimlessly find the best path towards the target. 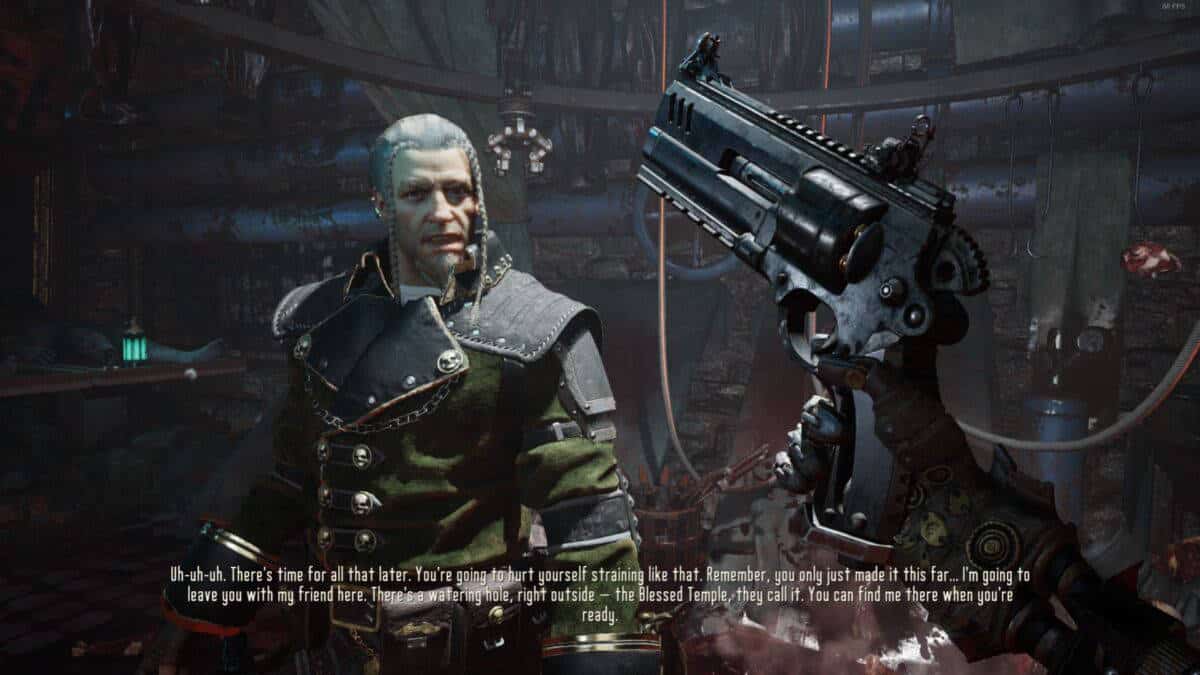 Getting around is fun thanks to the double jump and dash but there is also a clumsy wall-running feature that often saw me clip a wall and aimlessly run against an object until the wall-running wore off. There’s no real forced gameplay mechanic behind the wall-running and it would have been nice to have it a bit more refined than it was. The grappling hook also let me tether myself to a wall or object and pull myself towards it.

Combine this all together and the game offers up some decent variety to keep you busy. Then again, if only the levels and enemies had a bit more depth to them. All these movement options and the stages felt shallow. Enemies also became copy-and-paste after a while with no real reason to use the manoeuvres to take them down. Also, almost every enemy can also be taken down instantly with one button when close by. The incentive for doing so just didn’t make it a viable option. 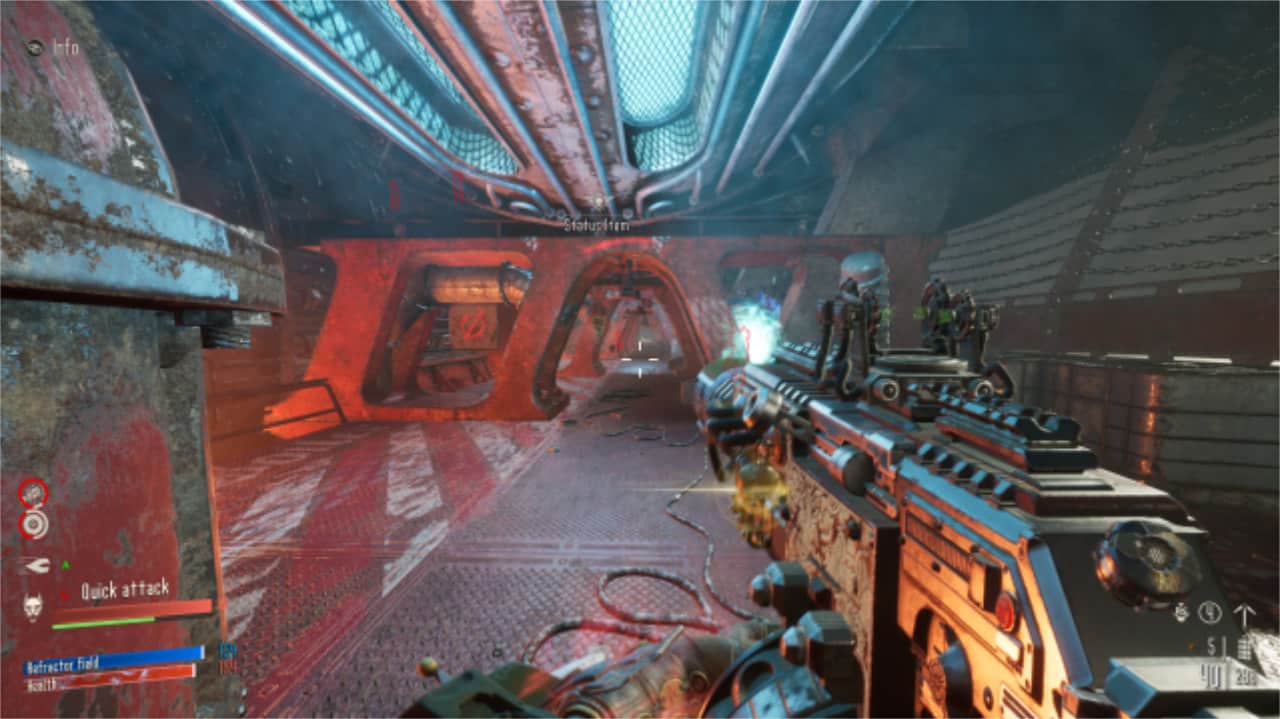 Outside of the missions, Necromunda: Hired Gun also packs a decent upgrade system where I could improve my health, reflexes and more. There’s also a somewhat enjoyable gun crafting mechanic that saw me install new mods onto a weapon to improve its damage and stability. There is enough “RPG” here to keep you going even after completing the dozen or so missions. However, if you are playing this game for the story then you won’t find much here to enjoy. The main character is dull and a pain in the ass and the general writing is tough to follow.

All of this is quite a shame especially given how fantastic the Warhammer universe is. Sure, the levels are wow impressive when it comes to the design and visual appeal but the story and characters are painful to be around. I wanted to care about what I was doing but a the end the game became a gorefest and an “okay” one at that oo. 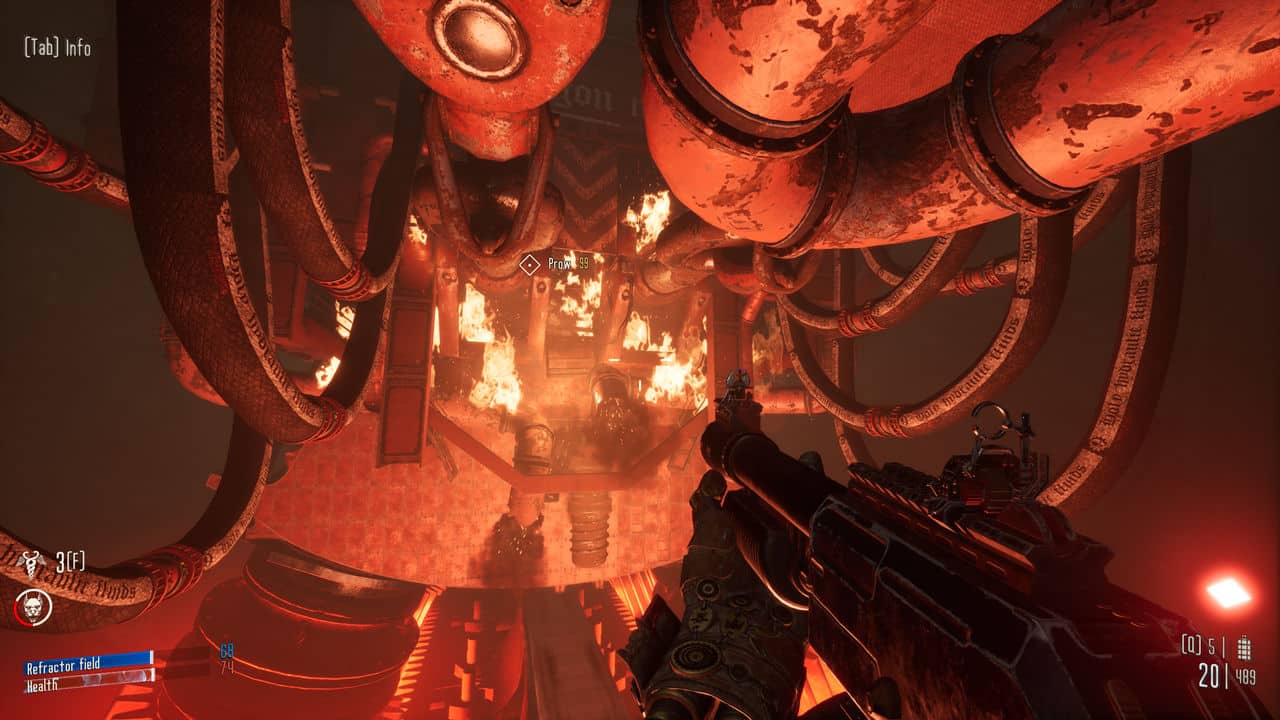 There are also quite a lot of bugs. I had to restart my game after every mission to trigger the chat box with the main character. The prompt simply never appeared unless I did so. Don’t get me wrong, this will probably get fixed but it was still a chore regardless.

Necromunda: Hired Gun could have done with some multiplayer. It would have made the not-so-fun missions a bit more enjoyable. Not to mention the post-game content grind for better guns and gear would have been a lot more enjoyable with a friend by your side. Doing this all alone just felt meh.

Necromunda: Hired Gun is not a bad game. Its gunplay is enjoyable and the world is gorgeously crafted. I just wish it had a bit more polish to go around. Enemies need more excitement, gameplay needs more mechanics and less shooty shooty and the story should have been focused on a bit more. For a brainless shooter, it w0rks but that is not what this is meant to be.

This Necromunda: Hired Gun review was based on a code sent to us by Focus Home Entertainment